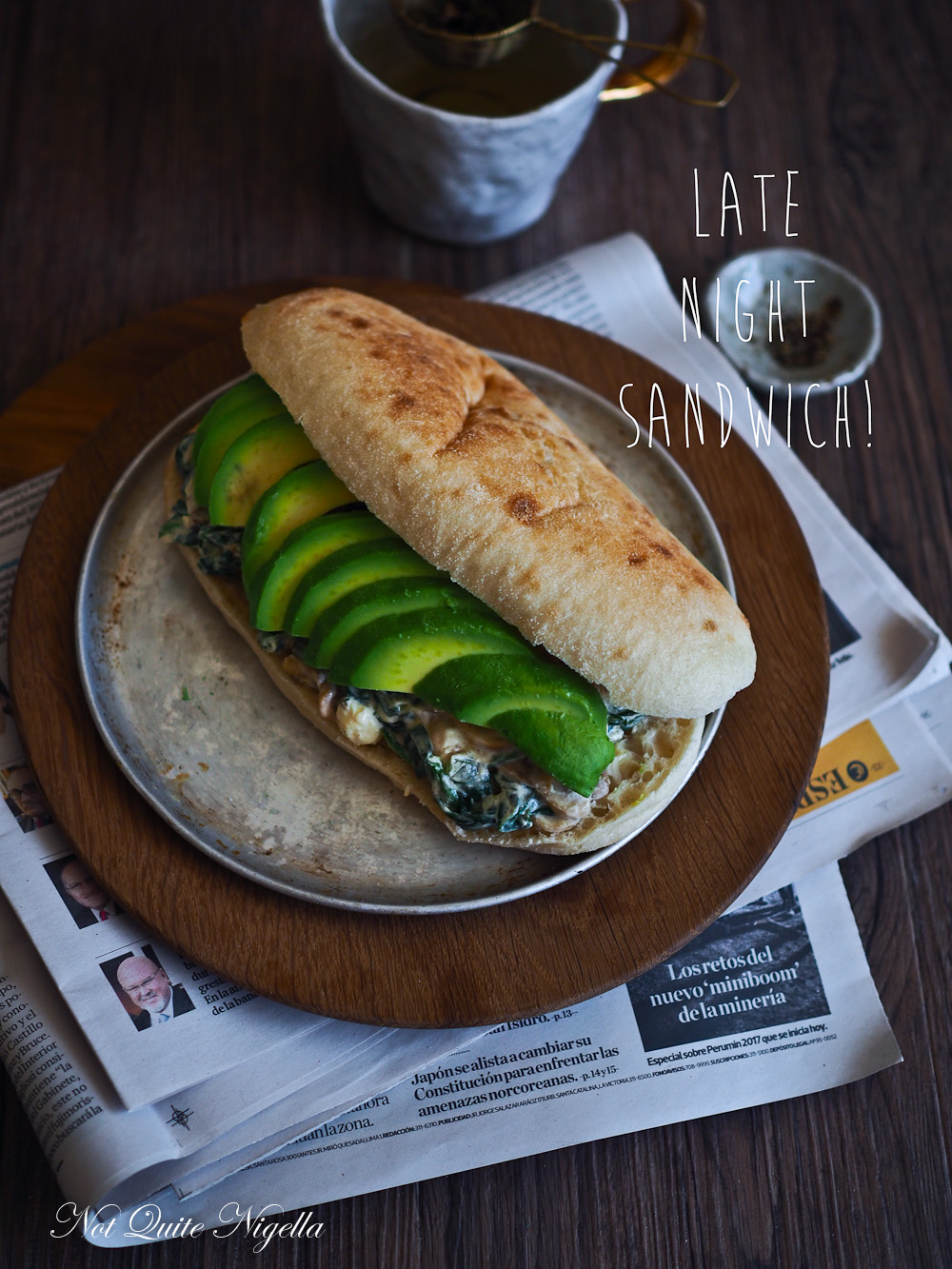 I became absolutely obsessed with this delicious sandwich while in Peru and whenever I would see it on the menu I would always order it. It seemed to be the standard vegetarian offering on the menu made of the simplest ingredients but put together it is so much more than a sum of its parts. And yep this is a pushy recipe!

I used to create excuses to eat this sandwich a lot. You see I first discovered this at the hotel we were staying at called the Atemporal Hotelito in Lima and I've since seen this on quite a few menus in Peru. The Atemporal kindly furnished me with the recipe. It was the first proper food I ate after consomme when I got sick there and I made sure that I was always made time to order it. 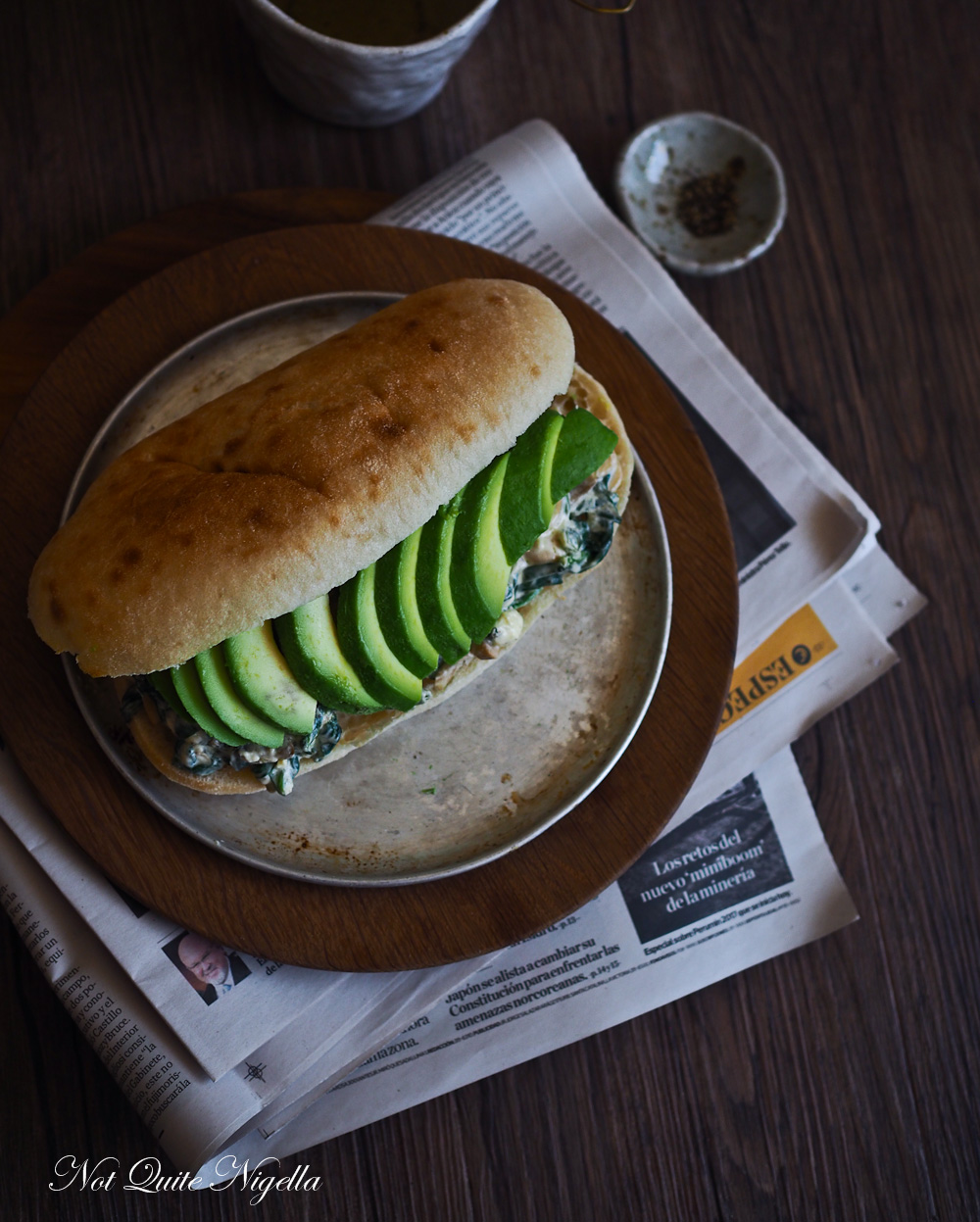 I know what you might be thinking, what's so special about mushrooms, avocado and spinach on a toasted sandwich? But when they're all cooked together and bound with cream cheese and lots of salt and pepper then it becomes positively lustful. I've eaten it every day since I got back for lunch or dinner, as fast as I can get my avocadoes to ripen.

Mr NQN was smitten by it too although admittedly he had been subsisting of a very strange range of meals while I was away. He had bulldozed through containers of food within the first week. Then he turned to his usual pasta with jarred sauce for dinner and takeaway subs for lunch. 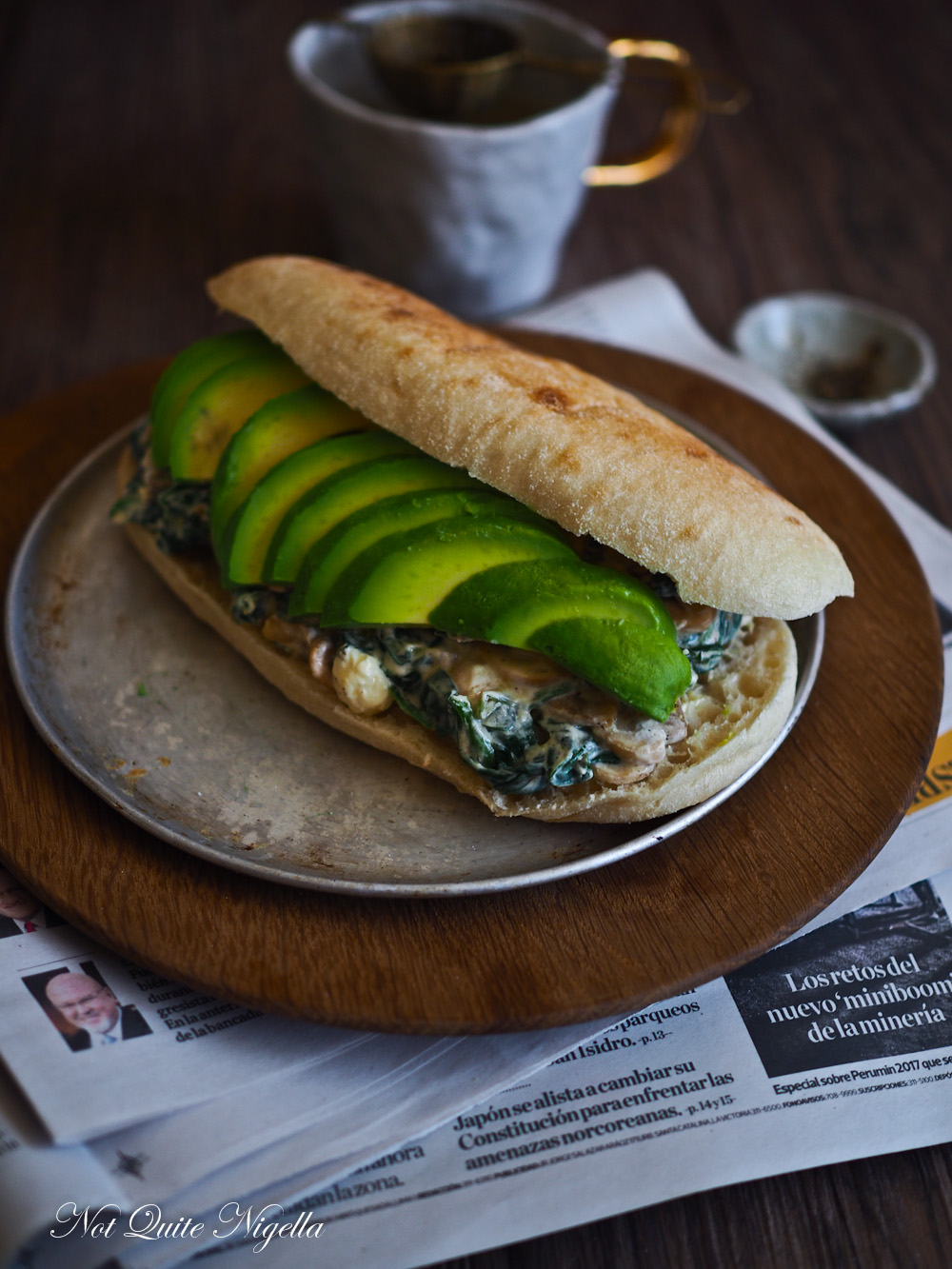 Mochi however was well looked after and I was happy to see that. He had also followed the stress saving solution that I had pre-arranged by asking our lovely cleaner to come by the day before I came back. He even tried to pretend that he had done all the cleaning (Finnish humour). I did ask him if the sheets were washed. Our cleaner Lina doesn't do that.

"Oh no they were washed last week," he said smiling.

"But they get washed every week" (note my neutral tone there ;)) I answered.

"Yes but your side wasn't slept on for the whole week so it's ok!" he said. I was too tired to argue and well I guess he had a point. Sometimes you've got to pick your battles...

So tell me Dear Reader, what do you think of his perspective on clean sheets? Clean or not clean? And what do you tend to snack on late at night? 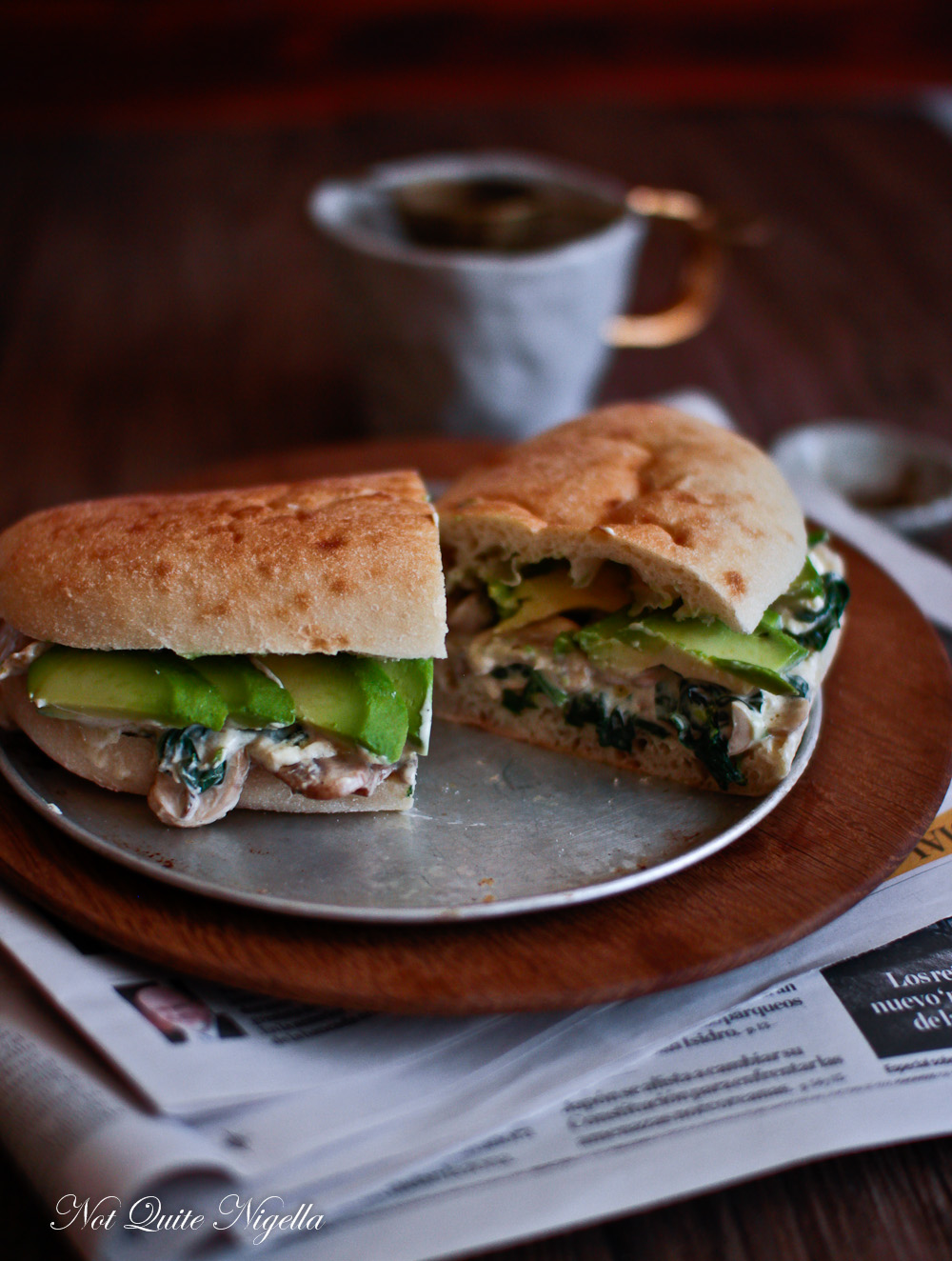 Adapted from a recipe at the Atemporal Hotelito, Lima

Step 1 - Preheat oven to 200C/400F and slice the breads in half horizontally. Place in the oven for 10 minutes uncovered. 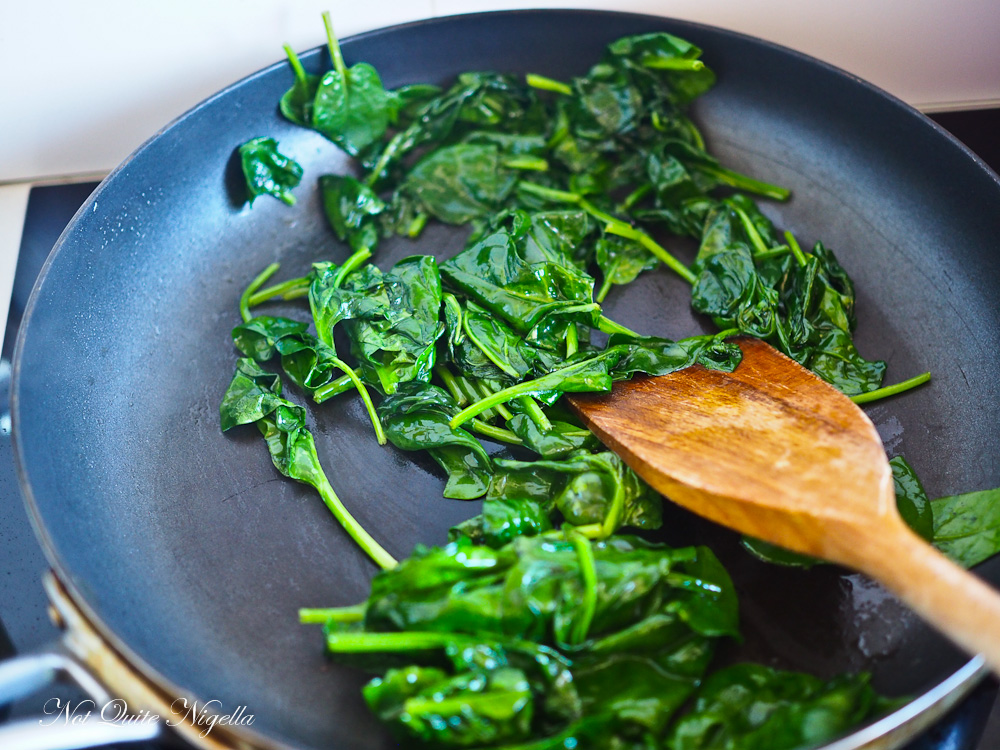 Trust me, the spinach really cooks down!

Step 2 - In the meantime, heat a frypan on medium high heat. Add the oil and saute the spinach leaves until soft and wilted. Place in a bowl with the cream cheese cubes. Then fry the mushrooms, you don't have to cook them until very soft, just take the chalky texture away from the raw mushrooms. Place in the bowl and mix everything together. 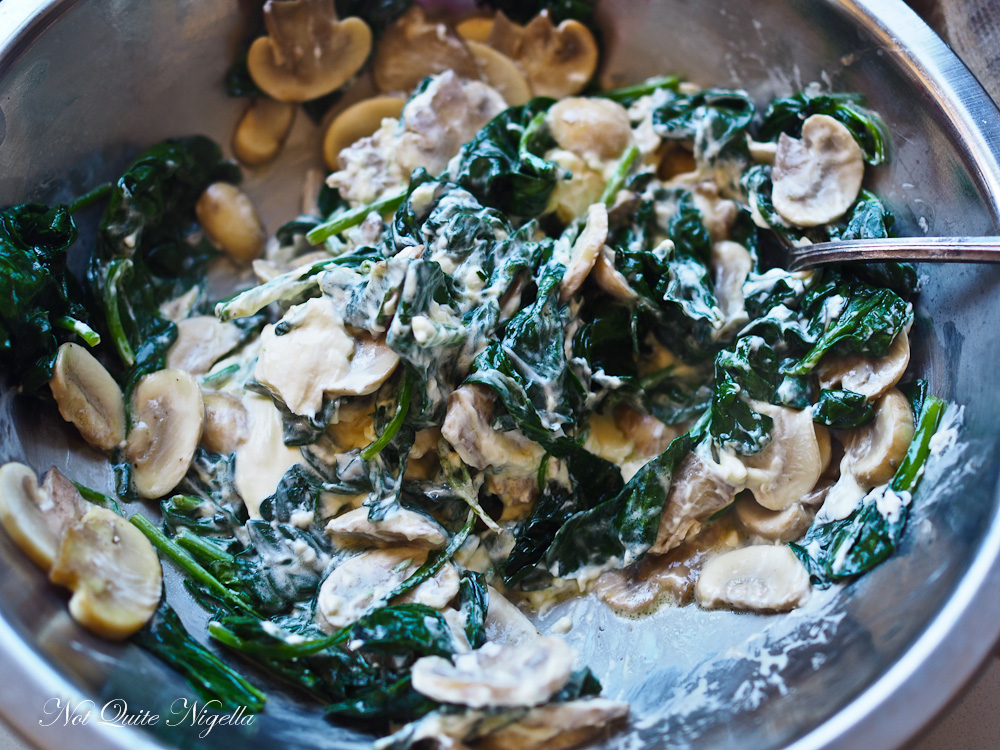 Step 3 - Spread the cheesy mixture on the bottom half of the breads and season liberally with salt and pepper. Halve and peel the avocadoes and fan out slices on top. Serve while bread is hot.