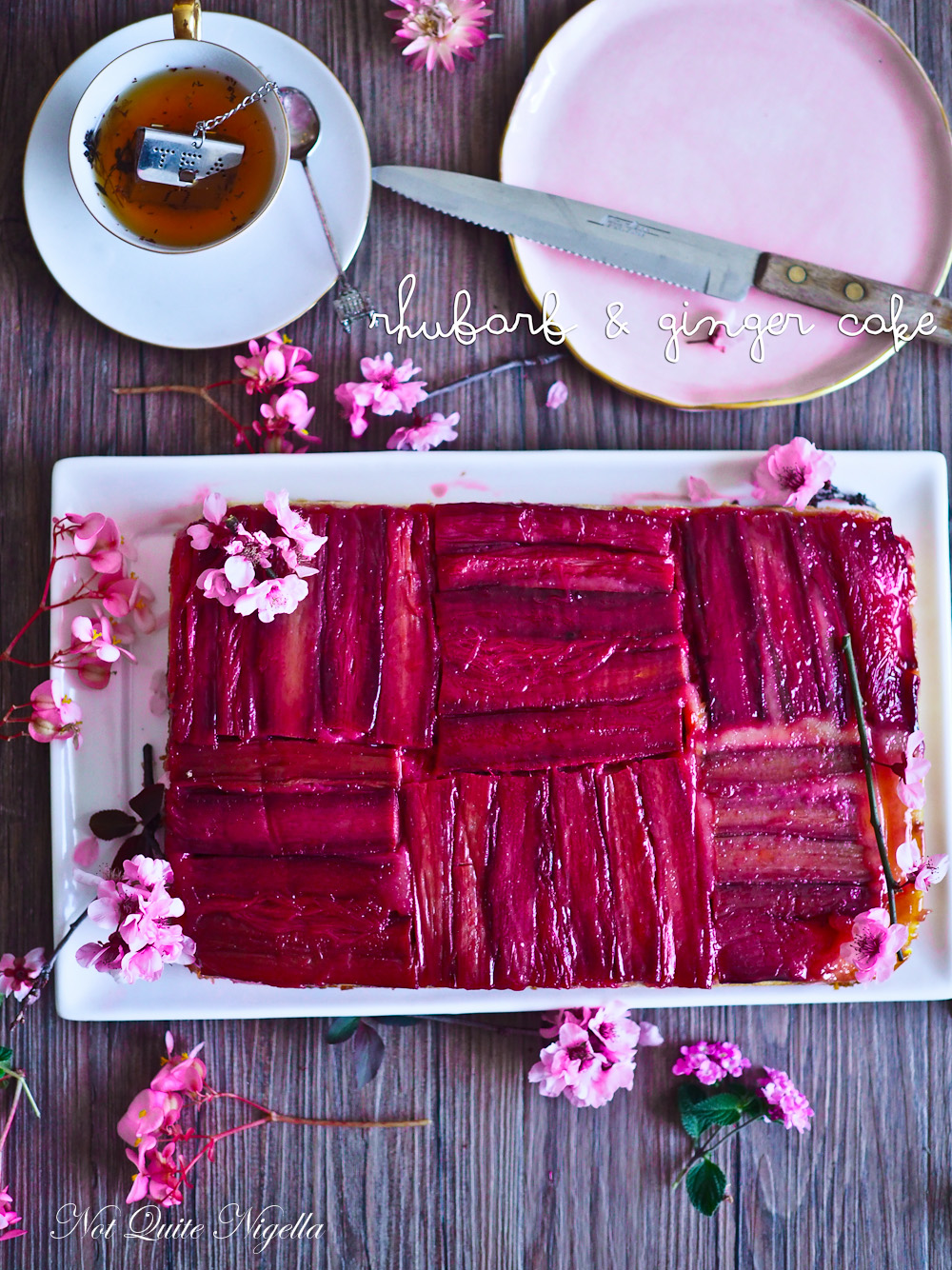 This geometric cake has a wow factor despite having a very simple recipe. This upside down cake features sticks of caramelised orange rhubarb baked on the bottom with a fluffy ginger butter cake! I called her Margot.

When I bought some ruby red rhubarb (try saying that 10 times fast!) I envisioned an upside down cake with glistening pink stalks. I mixed orange juice and sugar to form a caramel and the rest was a cinch. Honestly the hardest part was cutting the rhubarb to size-I realise how out of practice I am for measuring and crafts.

This was the first thing that I made when I came home from my trip to Peru. I always find getting back into the kitchen relaxing and it is the best way to settle back into home. I have never slept so much after a trip because it was quite a tour. I mentioned the whole anaphylaxis thing (sorry, I feel like I'm talking about it too much now) and then the bribe we had to pay before but then there was another fairly large event.

You see, I think Peru was trying to kill me.

I had just finally recovered from the anaphylactic shock when another alarming experience rattled at my door. Actually it was one of the lovely tour guests that was knocking at my door at 1am in the morning. At first, I thought that it was someone who had been out partying that was knocking. But through my earplugs I heard the muffled word, "FIRE!!!". 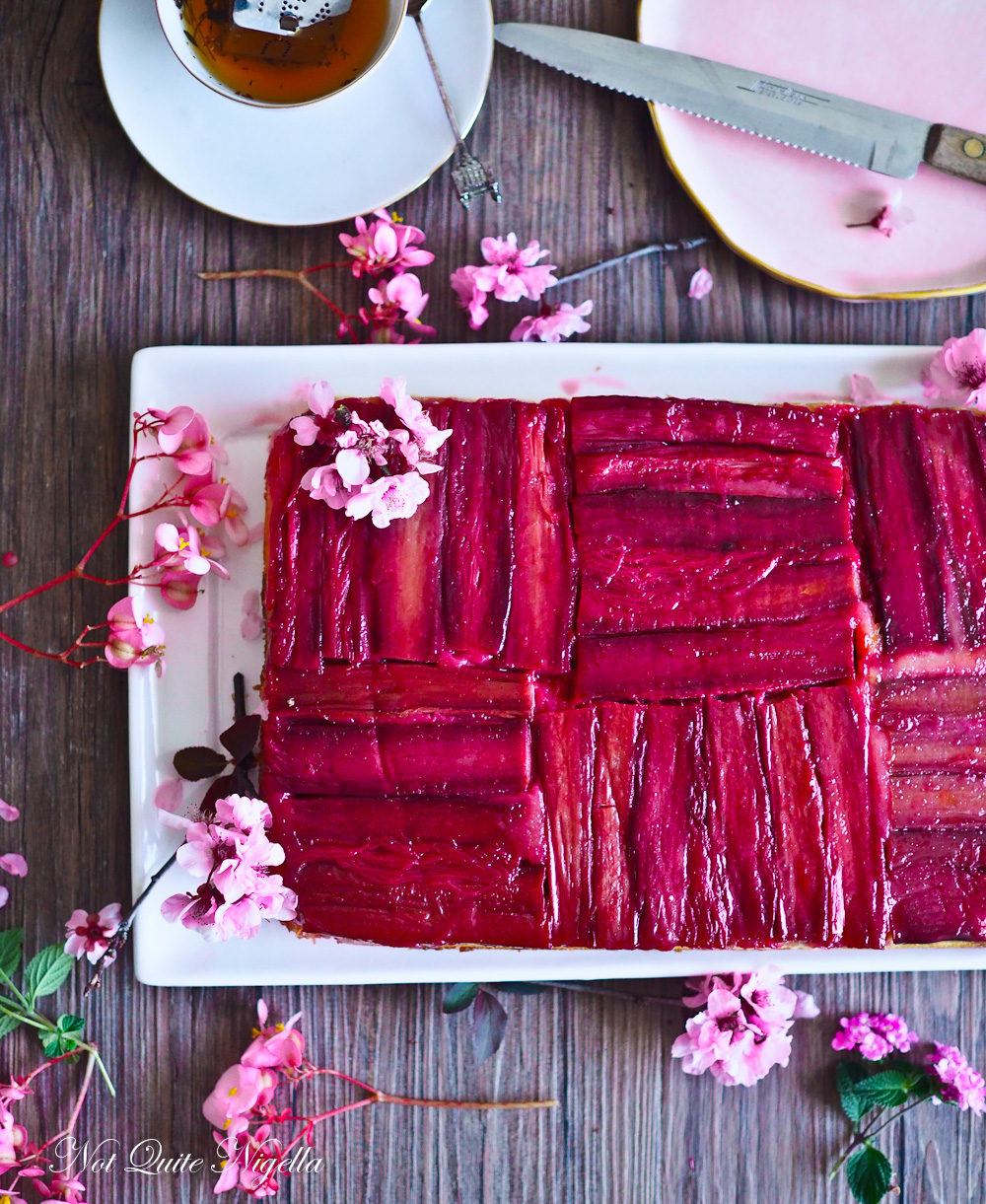 I jumped out of bed quickly and flung open the door. I could see some smoke but no fire and then someone yelled, "Bring your passport!" through the commotion. I went back and grabbed my passport and bag. I grabbed my coat and slippers and wandered out following people down the stairs. We stood outside and watched the glow of flames and smoke. We were moved to the nearby house of the owners and were told that the fire had started in the laundry with an iron left on.

So like I was testing out the emergency services in Peru I am happy to report that the fire department works as well as the ambulance service does. They had the fire under control and surprisingly there was no smoke in our rooms and we were free to go back to our rooms. We shuffled back in, still sleep weary although sleep wouldn't come for a few hours given the ruckus.

You can probably see why I prefer more sedate pastimes like baking no? ;)

So tell me Dear Reader, have you ever been in a fire? Have you ever had trouble come in more than threes? Are you good at arts and crafts? 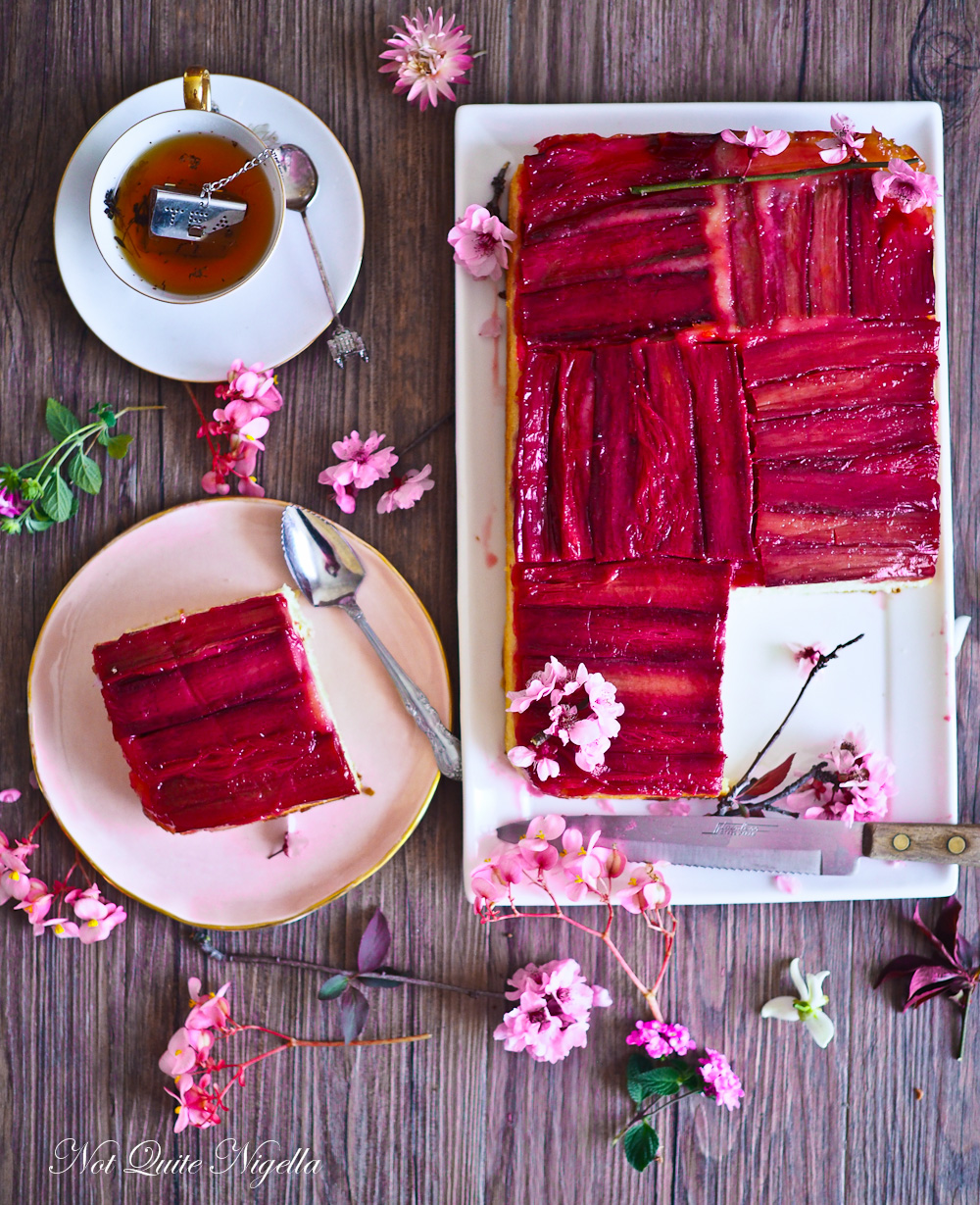 To make 1 cup of cake flour, place 2 tablespoons cornflour or fine cornstarch in a measuring cup and top with plain all purpose flour

To make buttermilk, just add 1 tablespoon of lime juice, lemon juice or white vinegar to a cup of regular milk 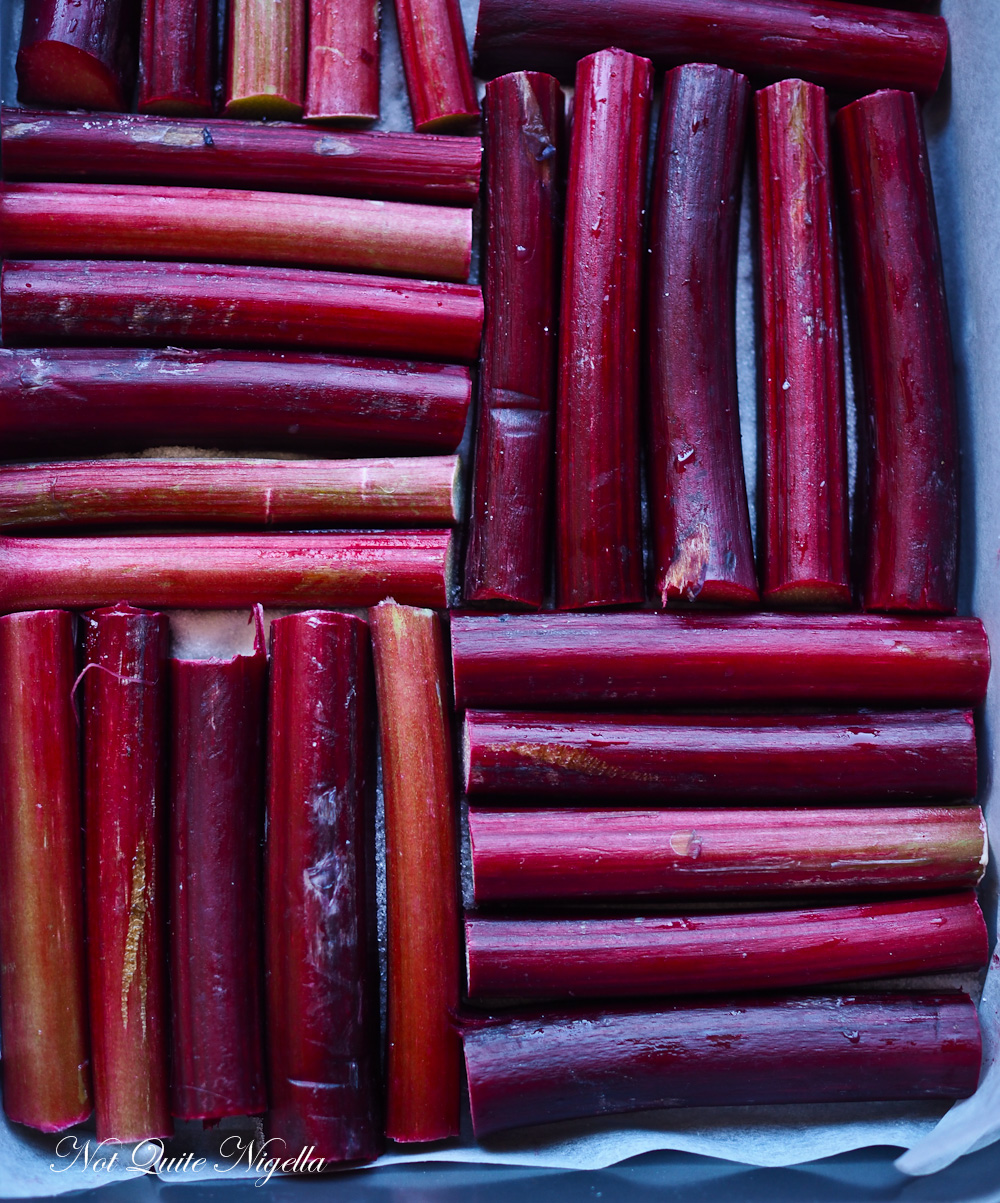 Step 1 - Preheat oven to 170C/340F. Line a 27x18cm baking tray with parchment. Sprinkle 1/4 cup of the caster sugar on the parchment base. Cut the rhubarb into sticks that measure half of the height of the tray. Arrange the stalks flat side down in a square pattern alternating them. Sprinkle over the other 1/4 cup of sugar and the orange juice (to help it form a caramel). 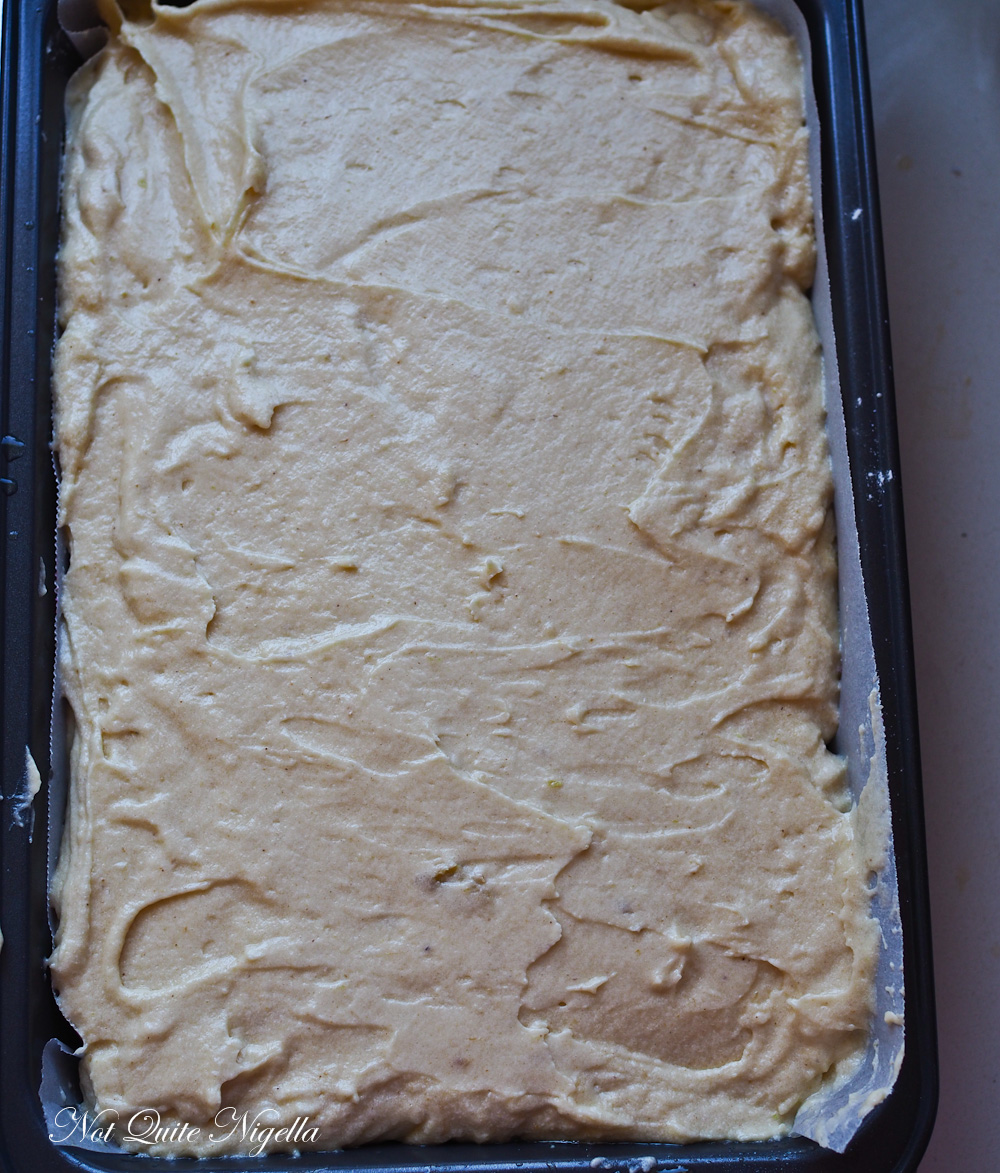 Step 2 - Beat the butter and sugar until pale and fluffy. Add the eggs in one at a time and beat well between additions. Fold in the flour, ginger and buttermilk until just mixed together (do not overmix). Dollop the batter over the sticks of rhubarb. Smooth over with an angled spatula and bake for 50 minutes. Remove from oven and then gently prise the caramel bits away from the sides of the tin while it is hot. Allow to cool for 30 minutes and then carefully place on a serving plate removing the parchment carefully.