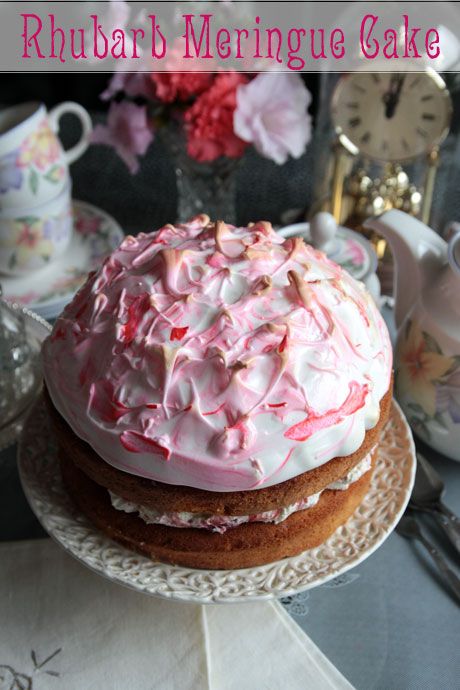 Once upon a time I worked in an advertising agency. There was a mother hen, a little like Joan Holloway in role but definitely not in looks. She was older and fussed and preened over some of the staff at the agency reminding them to eat lunch and furnishing them with cups of coffee just the way that they liked them.

She was forever sending around all staff emails about little things that really didn't warrant all staffers. One day she sent around an email to everyone marked urgent "Subject: My spoons!!" asking that anyone that had any of her special coffee spoons which she used to make coffee for the MD must _return them to her _immediately. 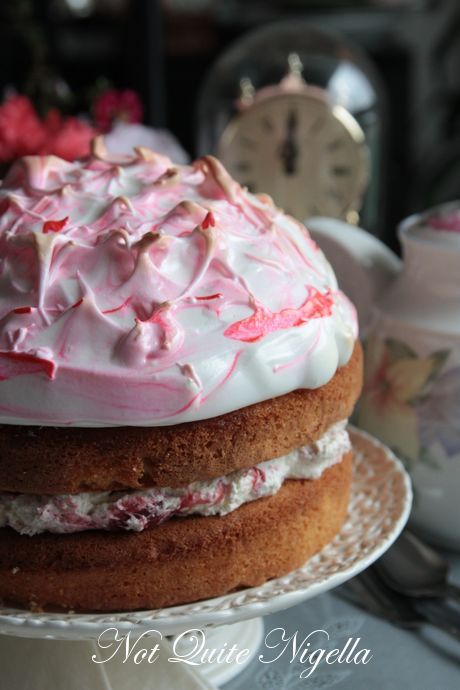 I rolled my eyes. I sat across the partition from her and was familiar with her notorious all staffer emails. My boss, who I had a good and joking relationship with was one of her favourites. So I emailed him.

"You creep! You stole your mum's spoons!" knowing that he would find the all staff email as amusing as I did.

Then across from the partition I heard her voice.

All the colour drained from my face. I had pressed reply instead of forward! Cue the ominous music.

"OMG!! That wasn't meant for you, it was meant for him!" I said running towards her desk and pointing at my boss who was doubled over with laughter tears streaming from his eyes. I quickly deleted the email on her computer before she had a chance to look at it again. 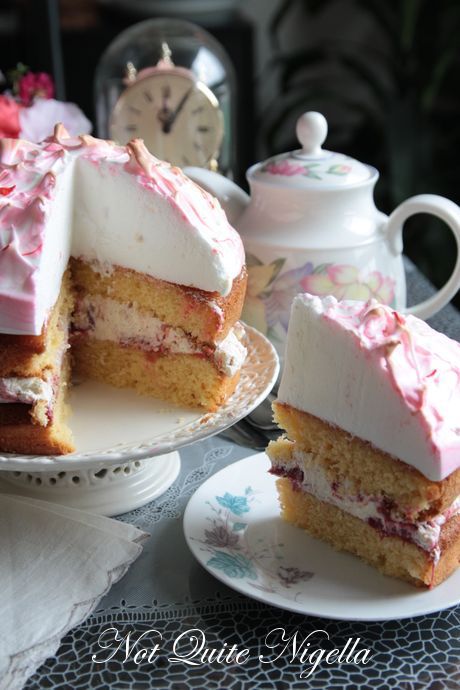 Luckily she saw the humour in it. I think we've all accidentally replied to someone instead of forwarding this and even though I don't think she fully understood what had happened, I suppose she was too busy with tracking down her rogue spoons to care about whatever it was. She then walked off to mother the MD who was waiting for his coffee (and I suspect cared not one jot which spoon she used).

This recipe is for the mums that understand. The ones that understand when we're short on the phone because we're busy at work or can't talk or the mums that make you your favourite dish just when you need it most. The mothers or indeed surrogate mother figures (I am lucky enough to have many of these lovely women orbiting me) that take you under their wing just because they're generous caring people. The cake itself is a testament to them. It is light, sweet with a rosy red blush to it. Rhubarb is such a wonderful partner to meringue as the slight tartness offsets the sweetness of the meringue beautifully and adding vanilla gives it all an aromatic warmth. 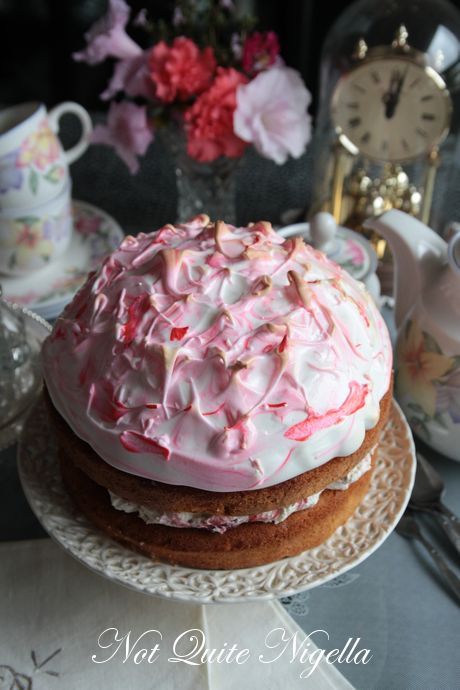 It was the kind of cake that I wasn't sure would work. It came from the Fleur Wood Food Fashion Friends cookbook. The photography was lovely but I wasn't sure that I could get the same prettiness and to be honest I had no idea whether fashion people actually ate cake. However I figured that she must be some sort of baker given that the recipe solves that annoying dilemma of having too many egg yolks after doing a sky high meringue or vice versa. Also if you really wanted to and say you had a copious amount of egg whites in the freezer (I actually had seven in my fridge) you could do it with a bought sponge cake wodged with cream and rhubarb in the centre.

The cake in the book however didn't appear to have had its meringue baked at all so if you don't want the tips slightly browned, you should avoid baking the meringue (one niggle and I suspected as much, the things they do for a pretty fashion spread!). However I have to eat my words, much like I did that fateful day in advertising. It is a great cake and a sky high crowd pleaser.

Happy Mother's Day for this coming Sunday to all the mothers and surrogate mother figures out there!

So Dear Readers, tell me about any email mishaps that you have had!

P.S. If I could beseech you and ask you for your vote if you haven't had a chance to vote already, I would most appreciate it :) Voting finishes in a few days on May 5th at 5pm AEST. You can vote here or on the button above or on the button on the top right hand side of the page. Thankyou! :) 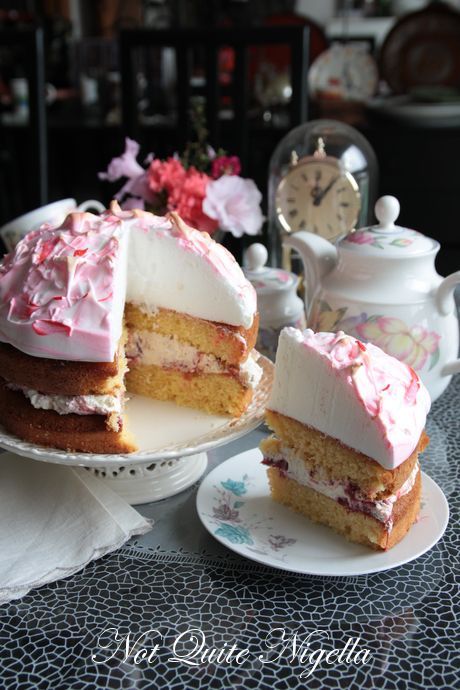 Step 1 - Preheat the oven to 180C/350F. Grease two 22cms springform tins and line the base and sides with baking paper.

Step 2 - Sift the flour, cornflour, baking powder into a bowl and set aside.

Step 3 - In the bowl of an electric mixer cream the butter and 1 cup of the sugar until light and fluffy. Add the vanilla and the egg yolks one at a time eating well after each addition. Then alternately fold the flour and the milk into the mixture-it is quite thick but ensure that it is well mixed. 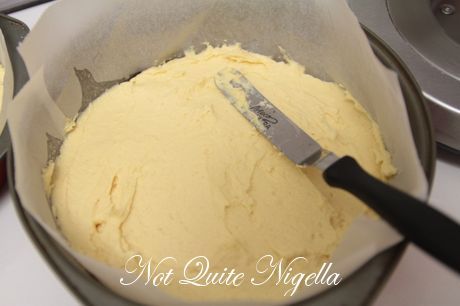 Step 4 - Divide the mixture between the two baking tins and take an angled spatula and spread out the batter until smooth. Bake in the oven for 25-30 minutes until a skewer inserted into the centre comes out clean. Cool. 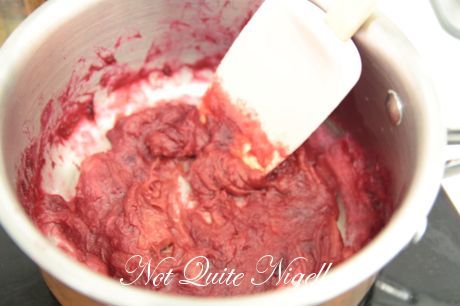 Step 5 - Make the rhubarb cream: in a small saucepan on medium heat, cook down the rhubarb, vanilla and sugar and a teaspoon or two of water until soft. Cool completely. In another bowl whip the cream and fold the rhubarb through this lightly-not too much mixing or the streaks will disappear. You can store this is an airtight container until assembly. 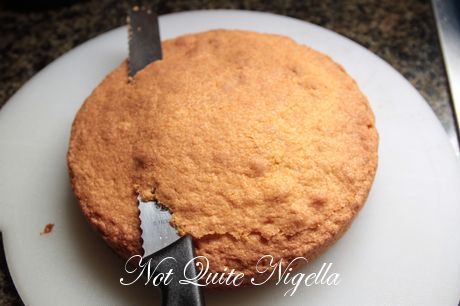 Step 6 - Once the cakes are cool slice off the tops with a serrated knife to ensure that they are flat and even. Carefully turn the cakes over so that the smooth base is facing upwards. Beat the egg whites until soft peaks form and then add the remaining 1 cup of sugar 1 tablespoon at a time until the meringue is glossy and stiff. The best way to test this is by turning the bowl upside down. If the meringue doesn't move then it is ready. 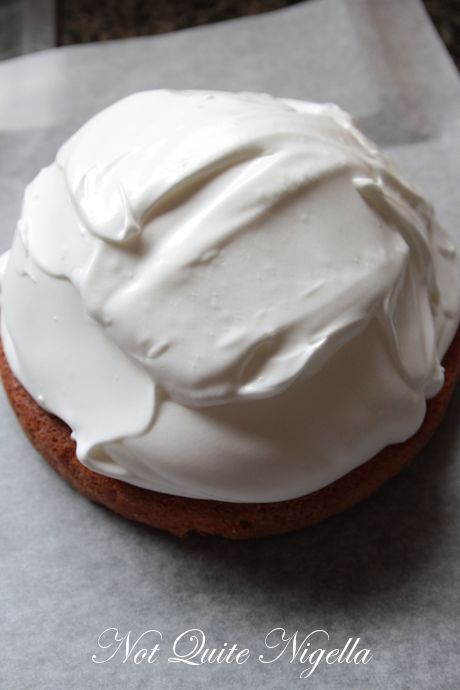 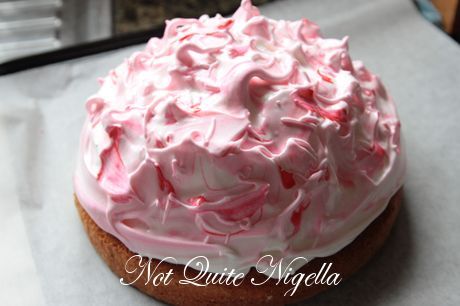 Step 7 - Place one cake on the serving plate and place the other cake on a parchment lined baking tray. On this one spread the meringue in a dome shape. Then take some pink colouring and swirl it and make peaks and spikes using a knife or a spoon. Place in the oven for 10 minutes by which time the meringue top will start to brown. Remove from oven and allow to cool completely. 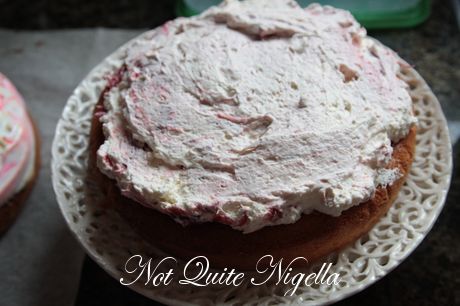 Step 8 - When the cake is cool, spread the rhubarb cream on the cake on the serving plate and then carefully lift the meringue cake layer on top of it. 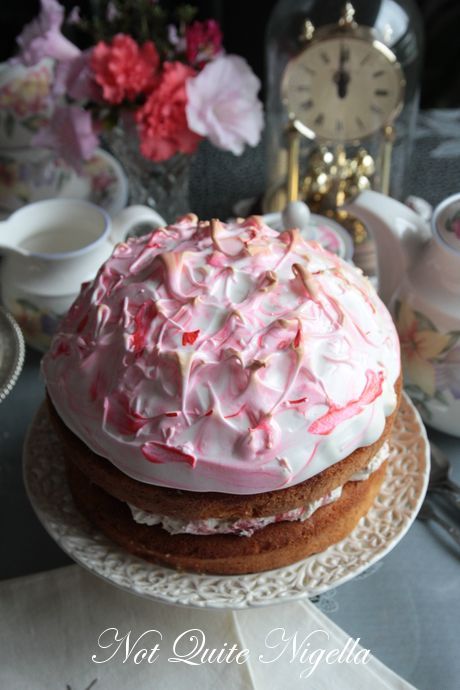