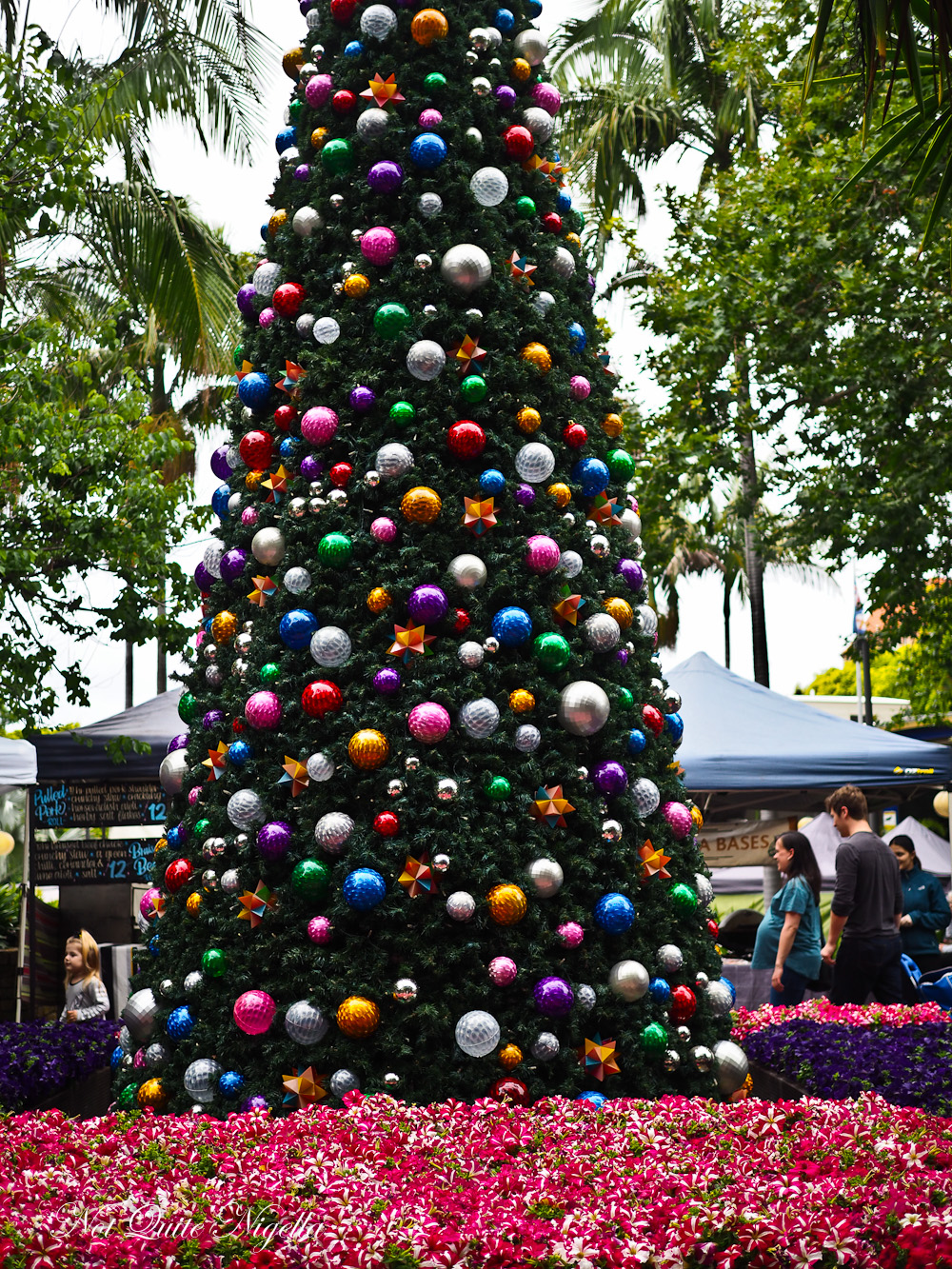 The Kings Cross markets have changed from a Sunday bric a brac market to include a Saturday farmer's market with plenty of places for people to buy produce and tasty treats. Imagine freshly filled jam and custard donuts, rainbow cakes and bacon and egg rolls! 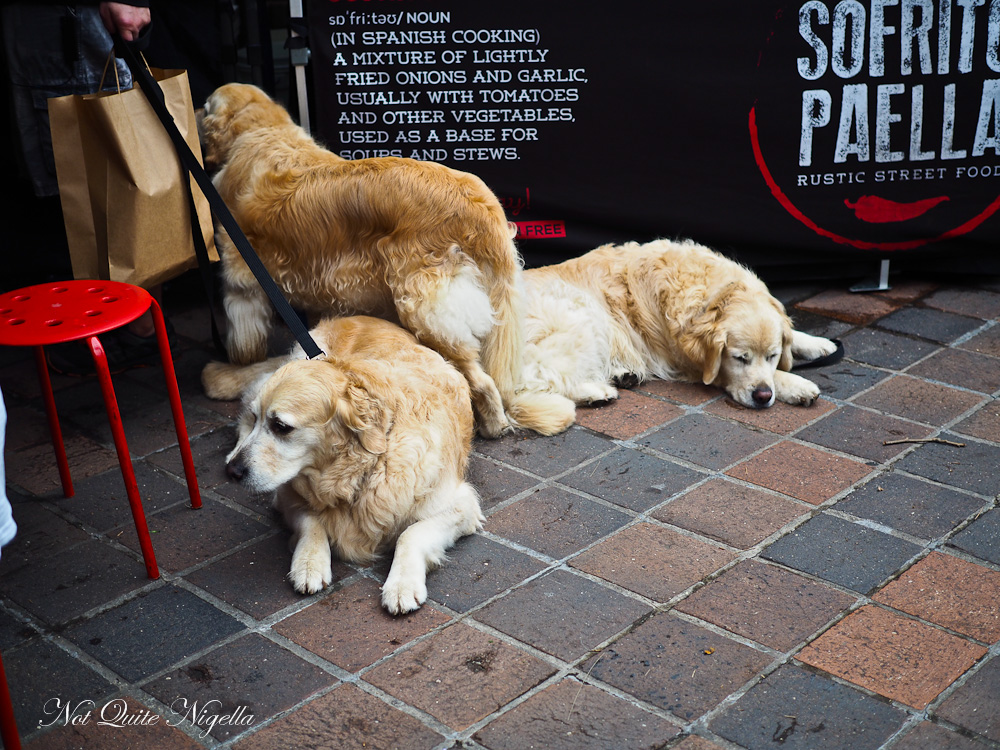 It's been quite a few years since I lived in Potts Point and during that time the suburb has changed dramatically. "We need to start early," said Laura and a 9am meeting time was set up. Because even if the markets trade until around 2pm most of her favourite goodies that she will be showing me will disappear by then. 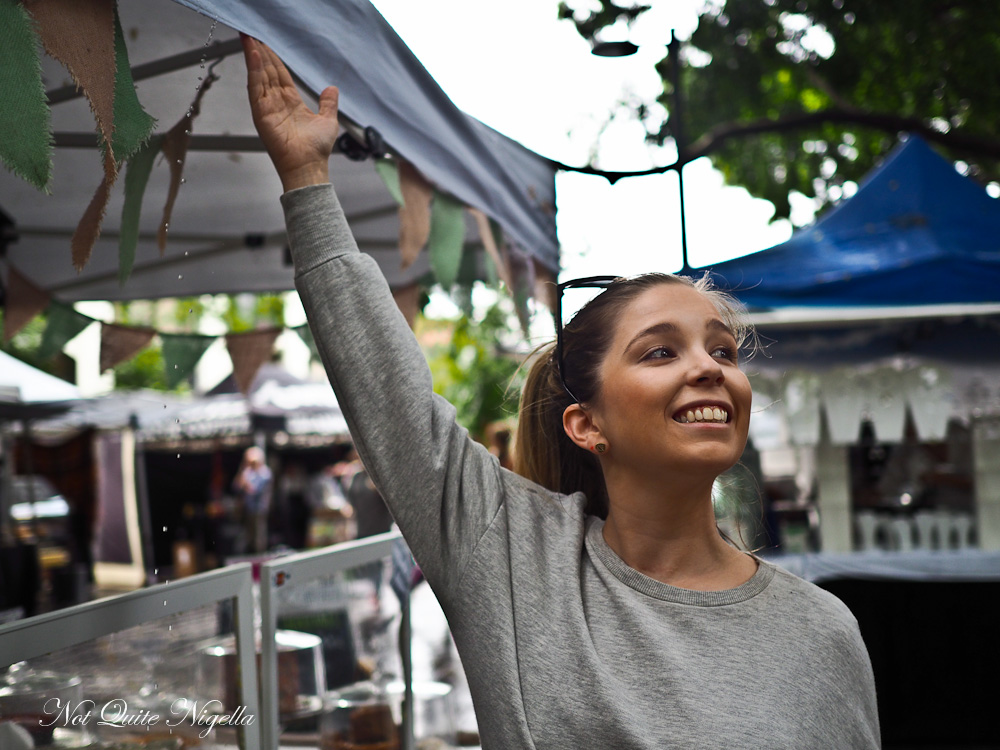 Even when I earmarked some carrots to purchase later to avoid carrying them, only three bunches remained an hour later. The Kings Cross market is packed with people buying food, produce and flowers this Saturday morning. Even the light rain can't deter people. 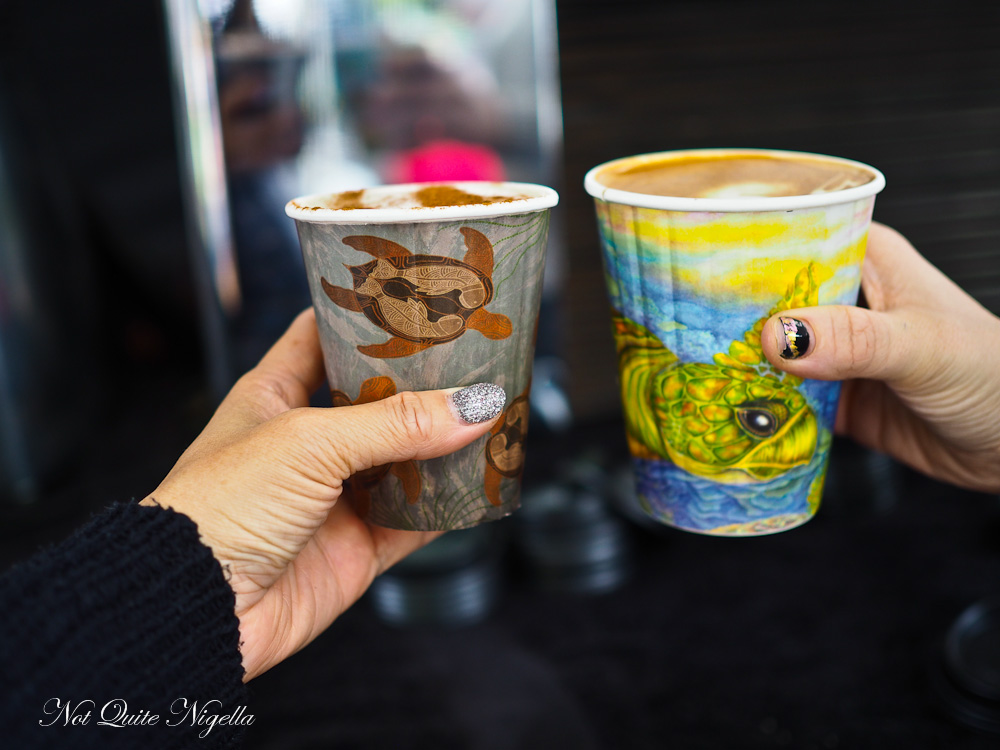 "This is where I get my coffee," says Laura. "Also it also comes in cute cups," she adds scooping up a colourful turtle cup. 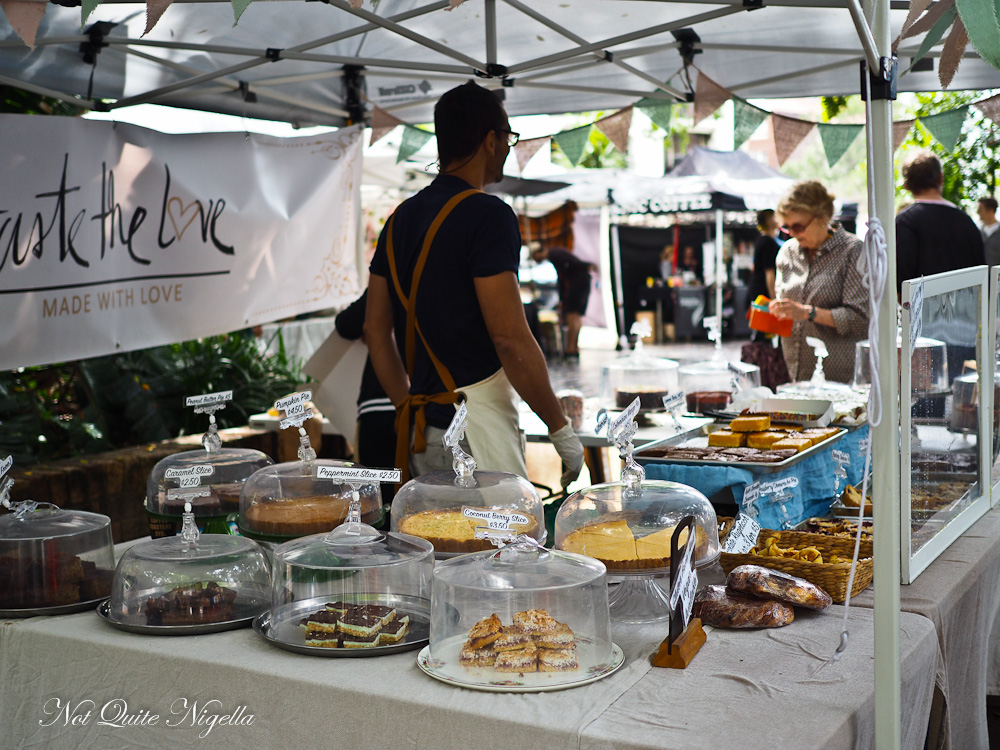 Our next stop is one of her favourite stands Taste the Love featuring home style cakes. She likes these because they taste home made rather than made in a factory. We dither over a few items-the Colombian mango cake catches my eye as does a rainbow cake covered in hundreds and thousands. 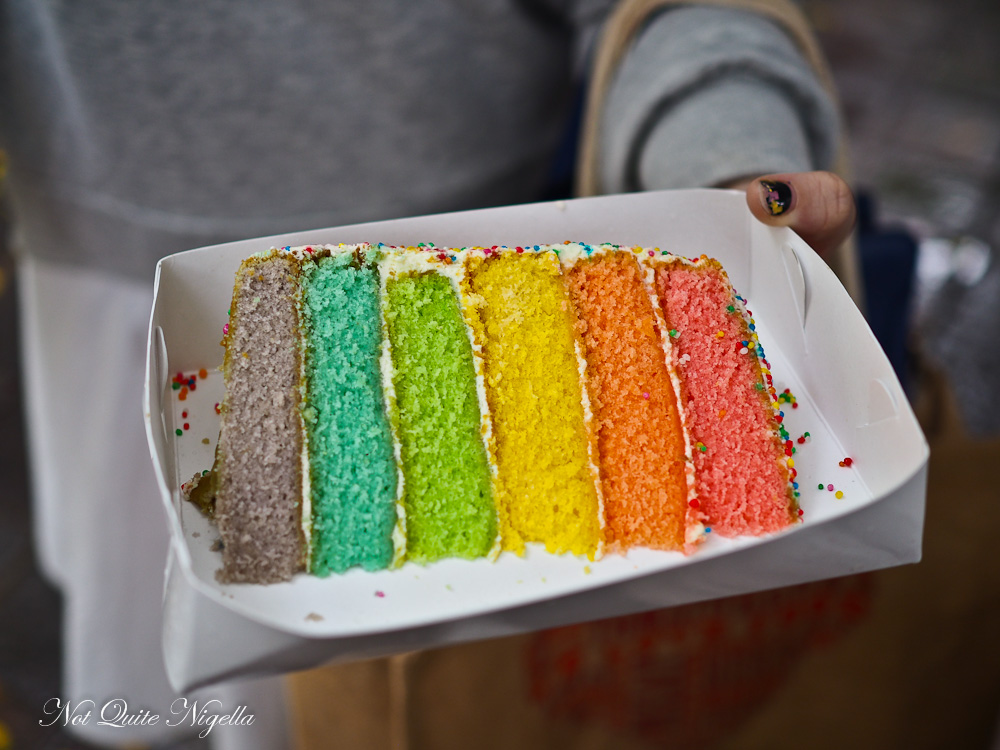 The tray of cinnamon buns baked this morning are drenched in a cream cheese frosting. I'm a sucker for frosting so we buy one of these. The mango cake has a similar texture of a pumpkin pie with a light touch of mango right at the end. The rainbow cake is a moist butter cake while the buns are best when heated up. 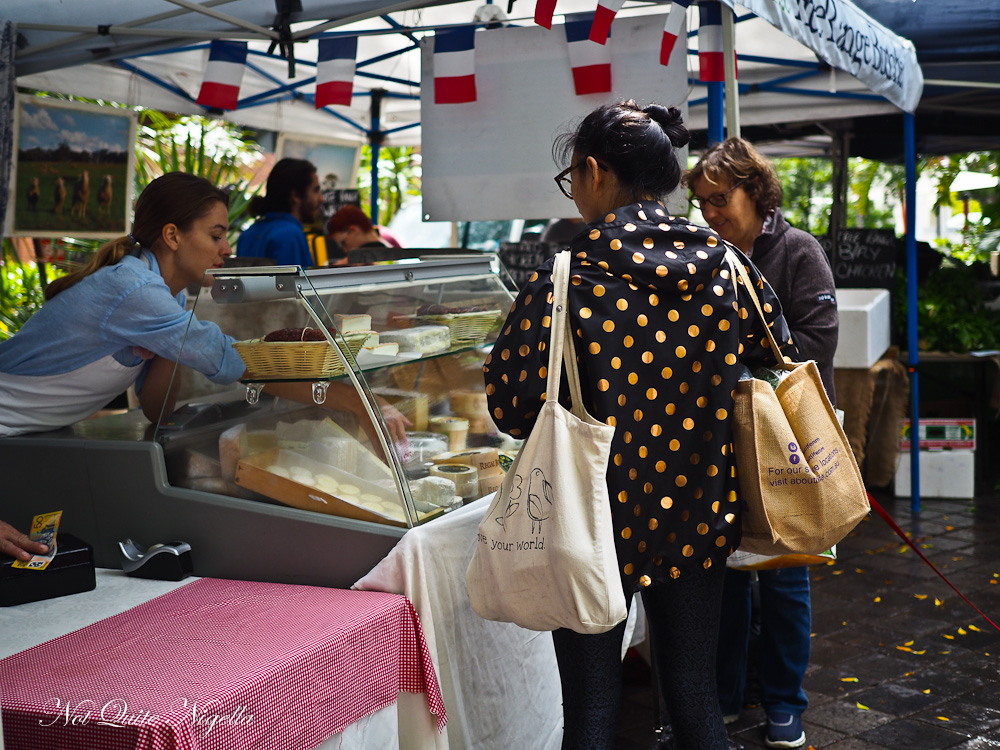 We stop by the French cheese stand where Laura sometimes buys truffled cheese. There are a couple of different kinds of truffle cheese available and they give us a taste. 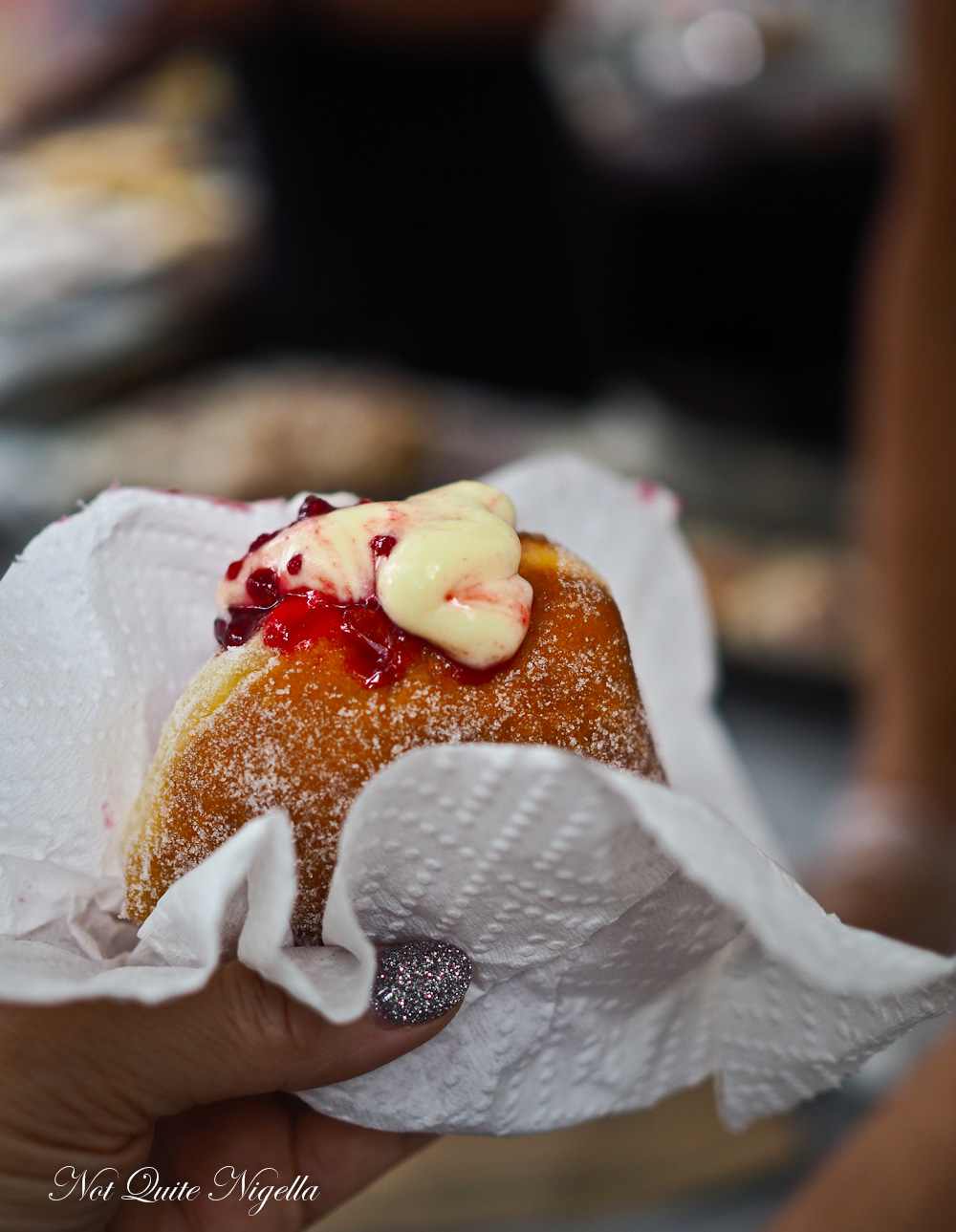 Laura knows and loves her sweets so our next stop is at Birgitta's Kitchen that sells a range of baked goods. Laura has her eye on two things: a slice of carrot cake for her mother as well as a donut filled to order with your choice of vanilla creme patisserie or raspberry jam. When given the choice we opt for both and it's delicious, the brioche based donut buttery and incredibly feather-light. 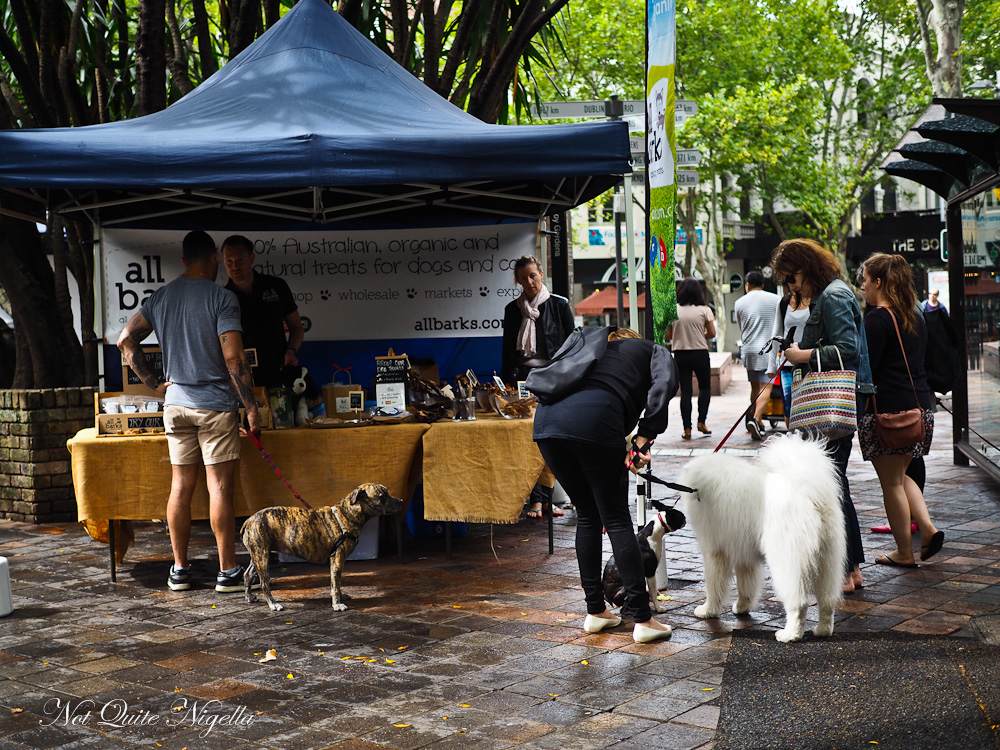 The smell of Bowen's bacon tempts me, which prompts me to wonder why there aren't any bacon flavoured air fresheners? I'm sure people would love it (okay some people, okay me). We spot a rare lull in the queue for the bacon and egg roll that is probably the food that the market is most associated with. 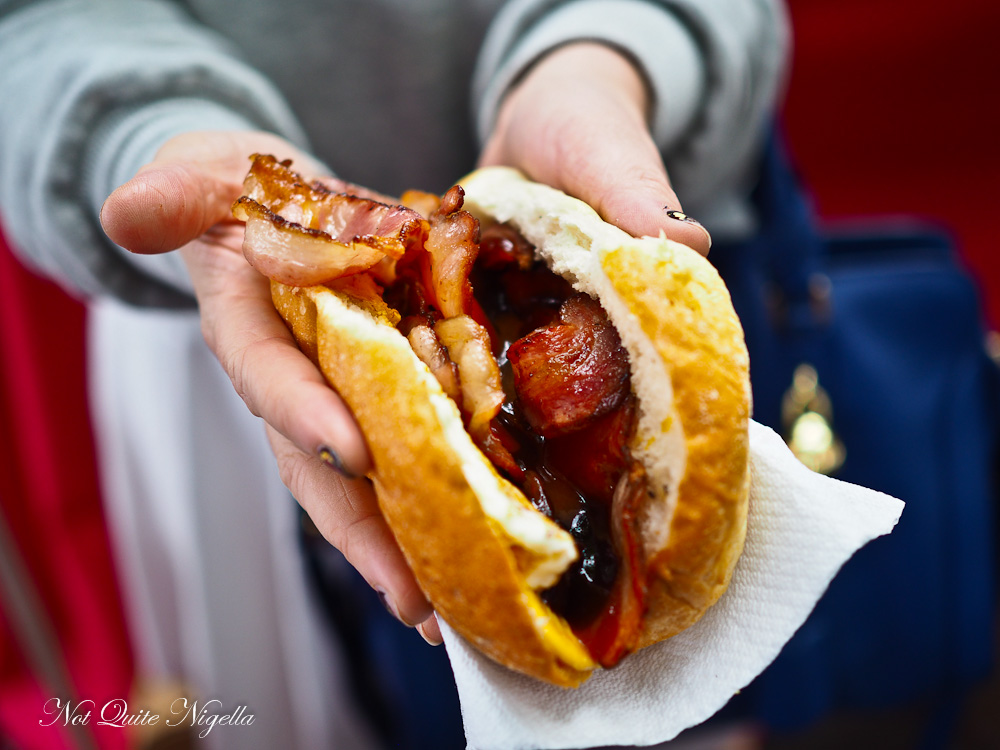 For $7.50 it's a bargain and there's two or three rashers of freshly cooked short cut bacon and egg. You can add as much tomato or bbq sauce and Tabasco at the table. It's all served on a downy soft white roll. 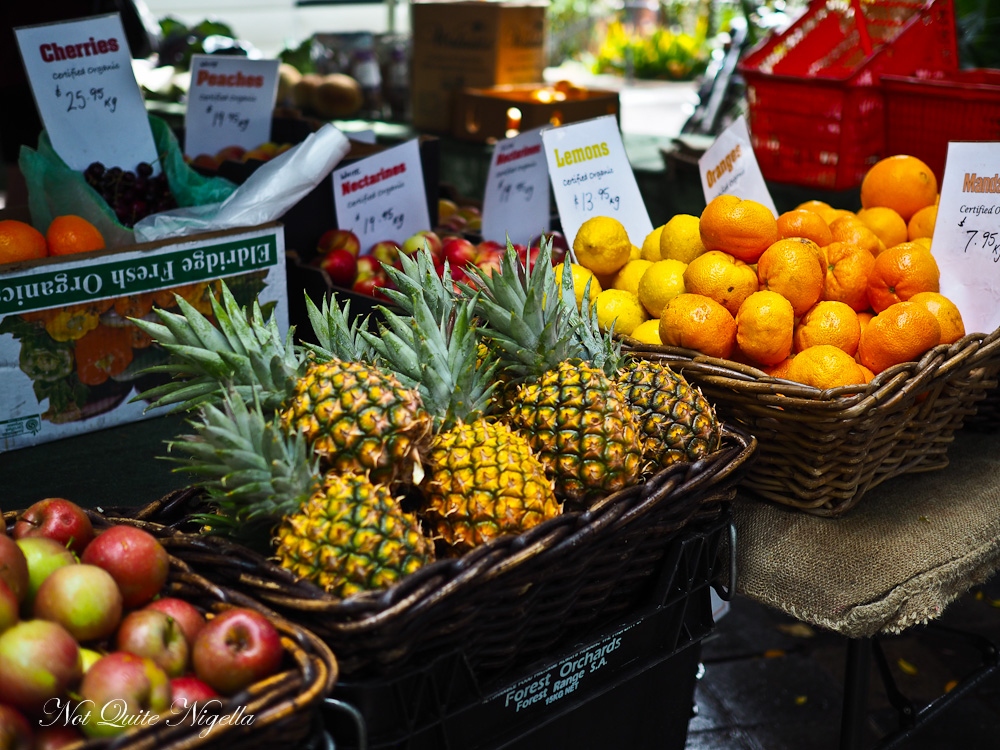 Now that we've eaten all the food we get around to shopping. There are dog treats but I'm without Mochi and she is quite particular about her snacks. There are a few produce stalls but Laura has them all sussed out. She steers me away from an expensive organic stand but she brings me to another that is very reasonably priced. 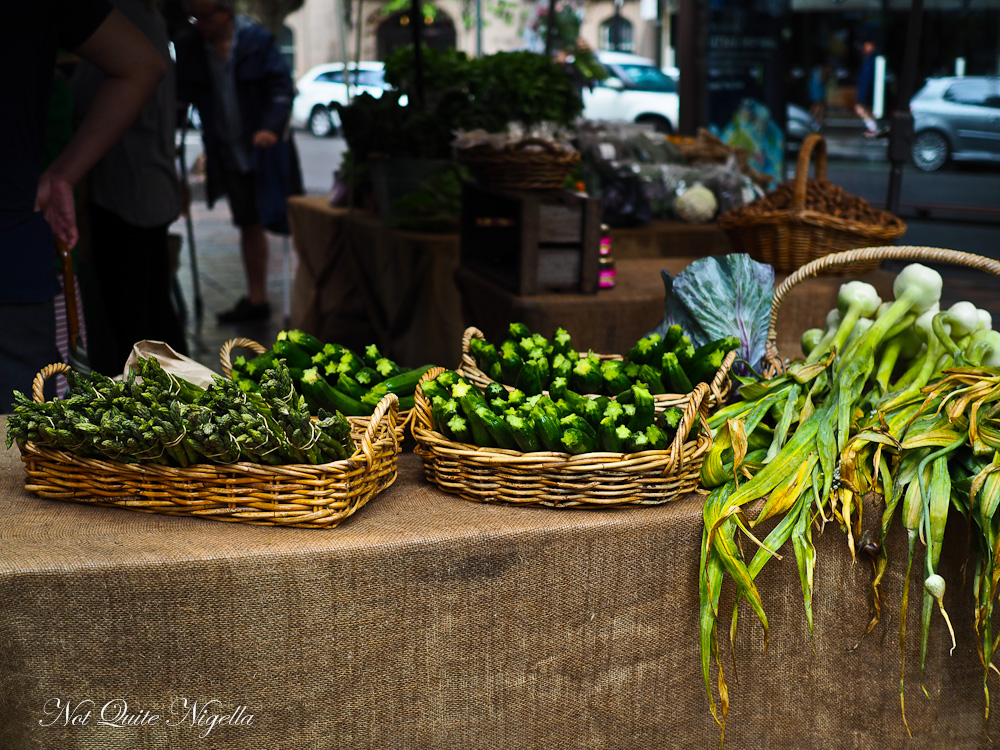 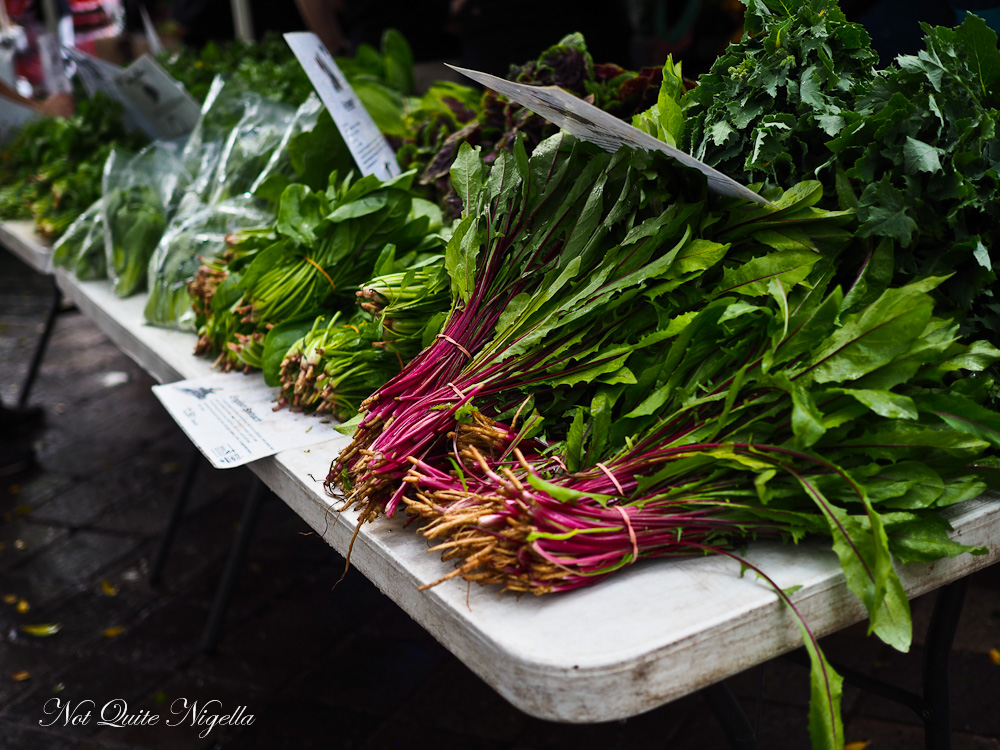 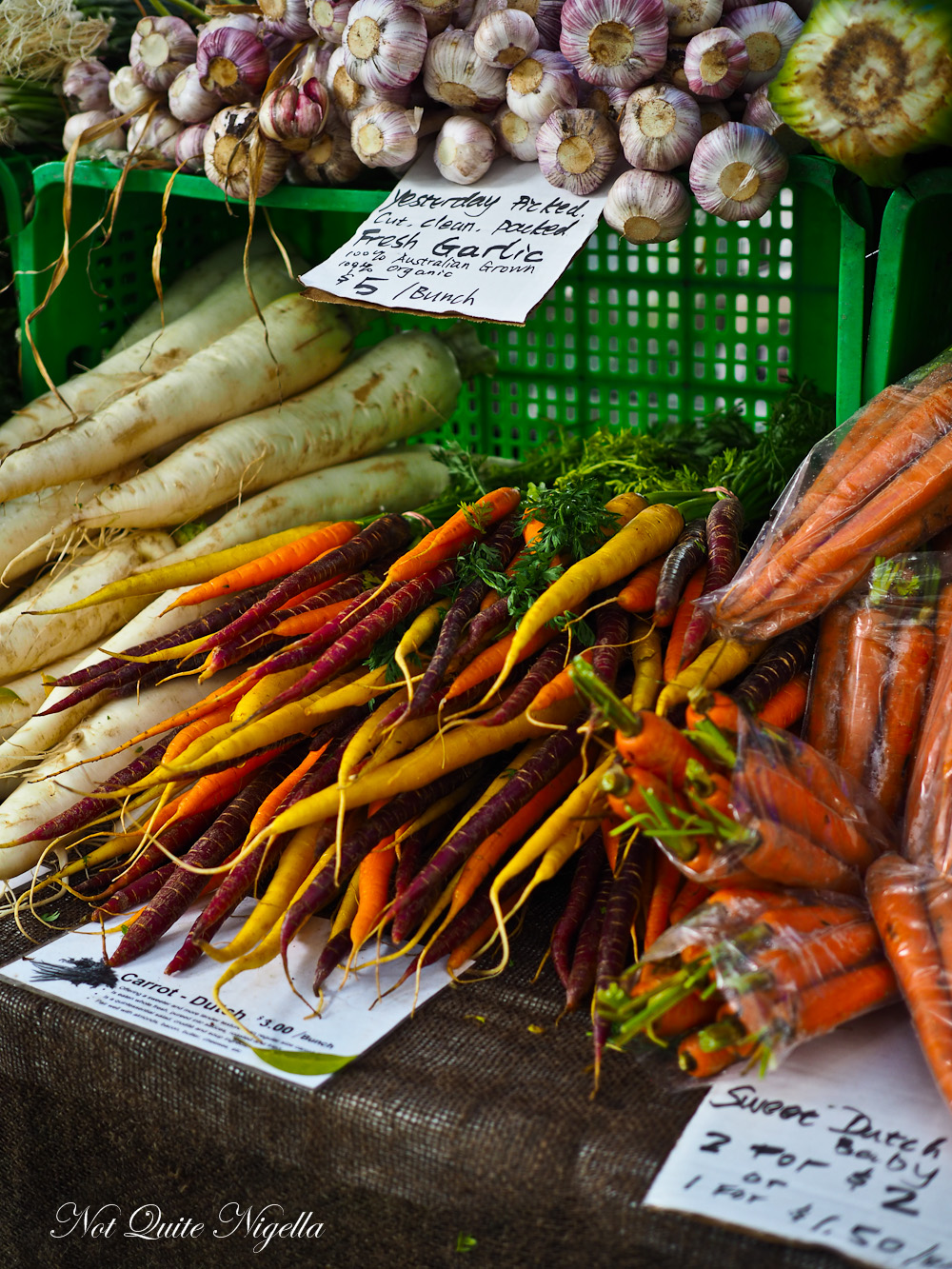 A bunch of beetroot bursting with freshness is just $3 and I also buy fresh apricots for a steal at $4.80 a kilo. They also have unusual items like treegrapes aka jabotica as well as prickly Chinese cucumber. 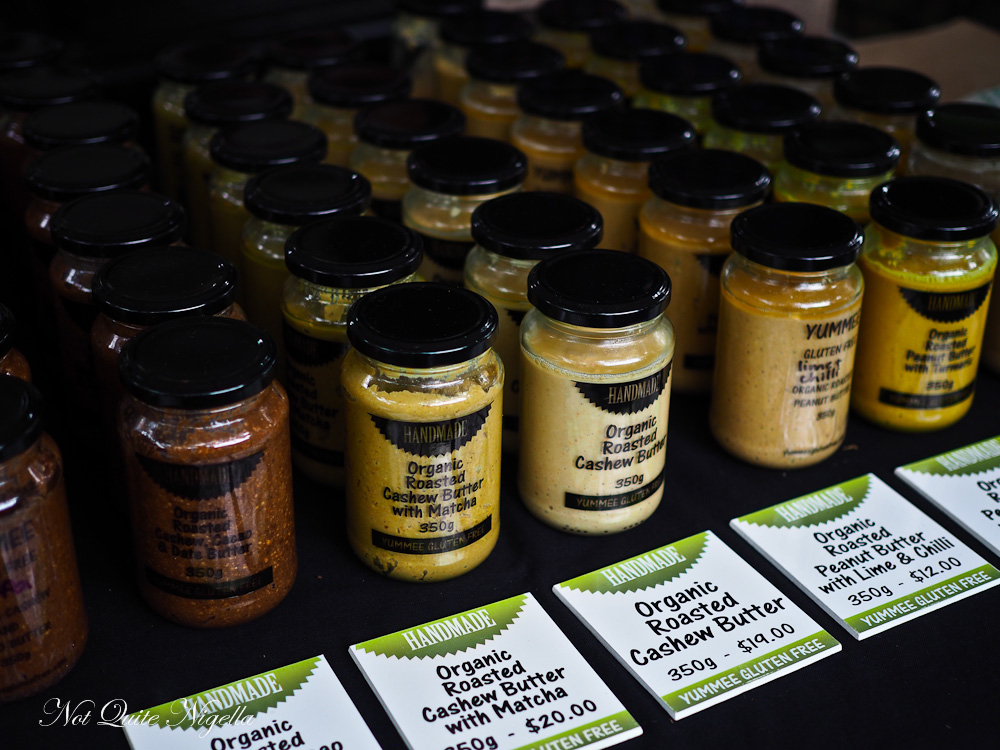 Our next stop is a Handmade stand with a range of nut butters. Alas the two best sounding flavours for me at least, chai and macadamia butter are both out. The nuts and butters aren't cheap at $20 for 350g but they are generous with samples. 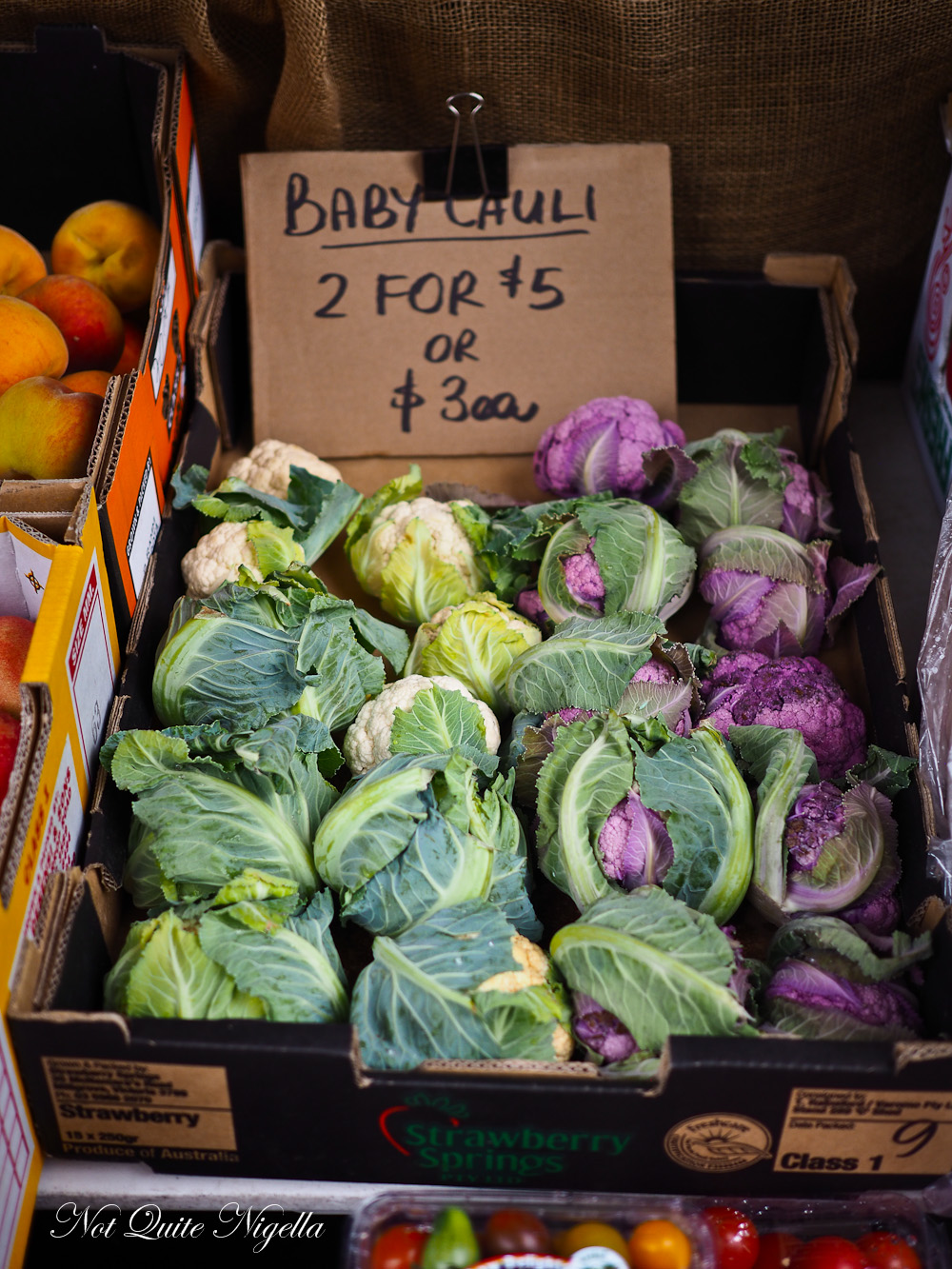 Laura stops by the Syrian food stall and buys four tubs of goodies as well as two za'atar pizzas to go. I've tried their items at the Marrickville Organic Market and they're very moreish. With bags and arms weighed down we make our way back to her apartment to divvy up our spoils!

So tell me Dear Reader, do you have a local market that you love? Do you tend to buy organic or do you find it out of your budget? 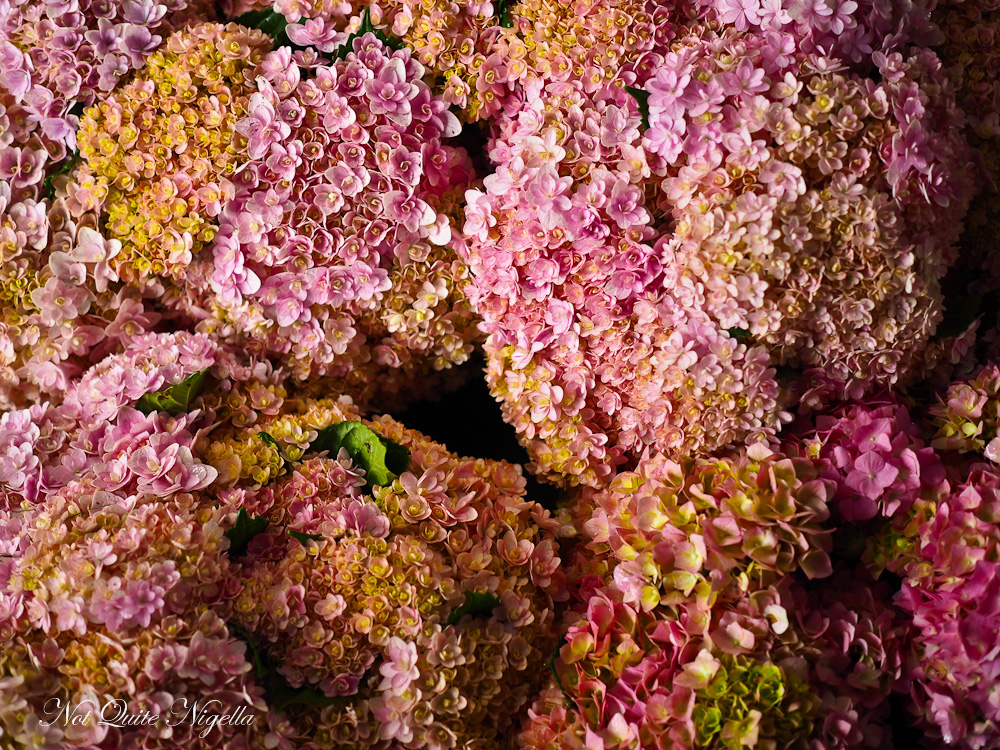 All food was independently paid for.