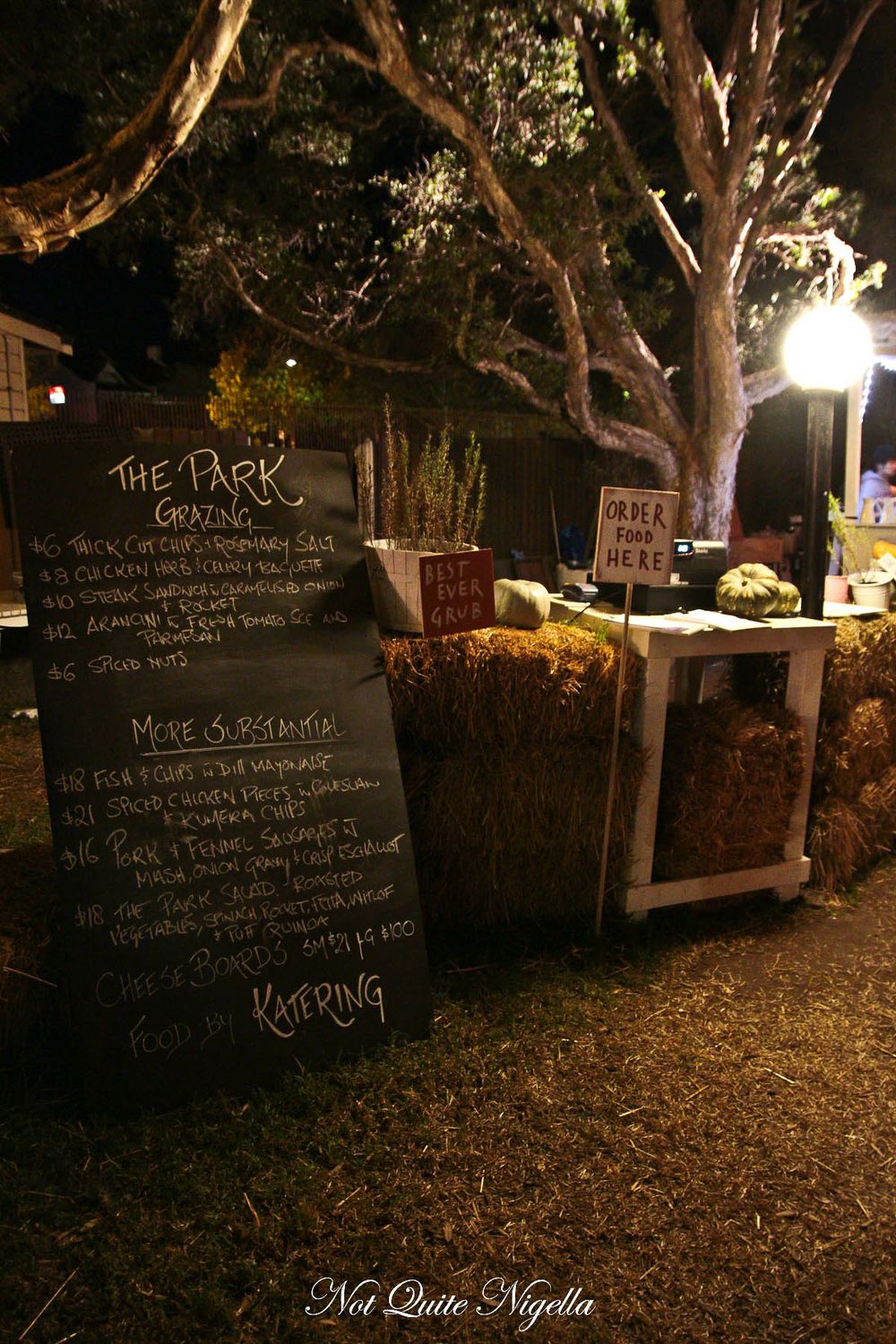 When Mr NQN and I moved back to the Eastern Suburbs from Mosman a few years ago, we moved right near to Centennial Park. People used to say to us "Oh that's wonderful, you must use the park all the time" and we'd smile back and nod and murmur "Well sometimes..." not wanting to admit that despite our close proximity to the expansive green park, we rarely set foot in it. We'd drive past it thinking "We really should go for a walk in there" only to keep on driving. Cut to about four years later and we're finally using it on an almost daily basis whether it be to work out or take walks. 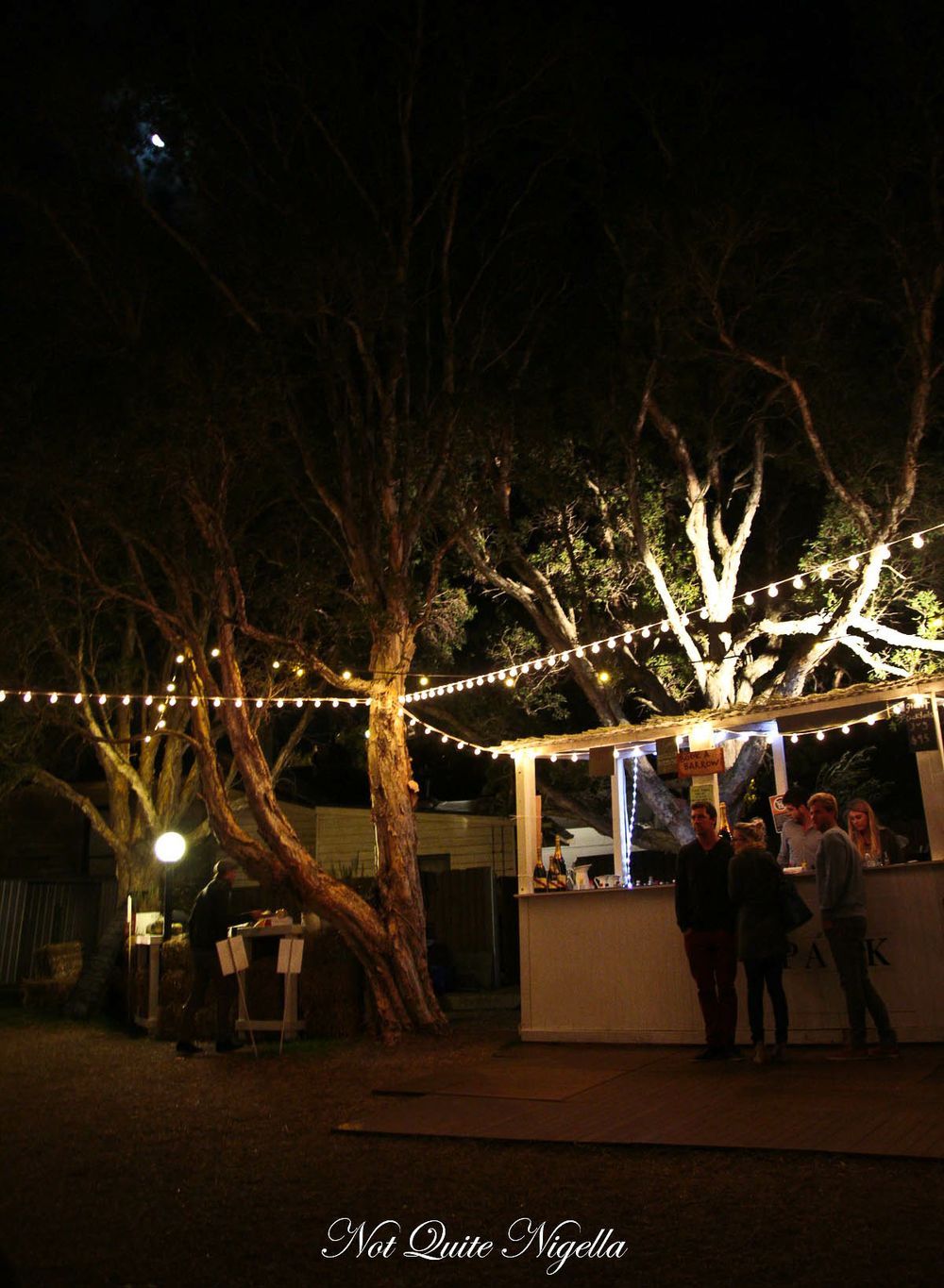 It was my trainer Nina that put me onto The Park, the pop up restaurant that sits at the Paddington Gates at The Cottage. Open from Friday to Sunday midday to 10pm-ish fairy lights are strung from trees and a white picket fence borders white tables and chairs. There's a bar and food provided and during weekend days it is abuzz with people and I think that the best time to go is on a sunny afternoon rather than on a cold evening. We're arriving here on a Friday night, albeit this past very breezy, chilly Friday night and the crowds gather where the outdoor heaters are located. There is live music and bakes of hay, pumpkins and rustic country touches abound. The Park pop up is for another couple of weeks until June 2nd, 2013. 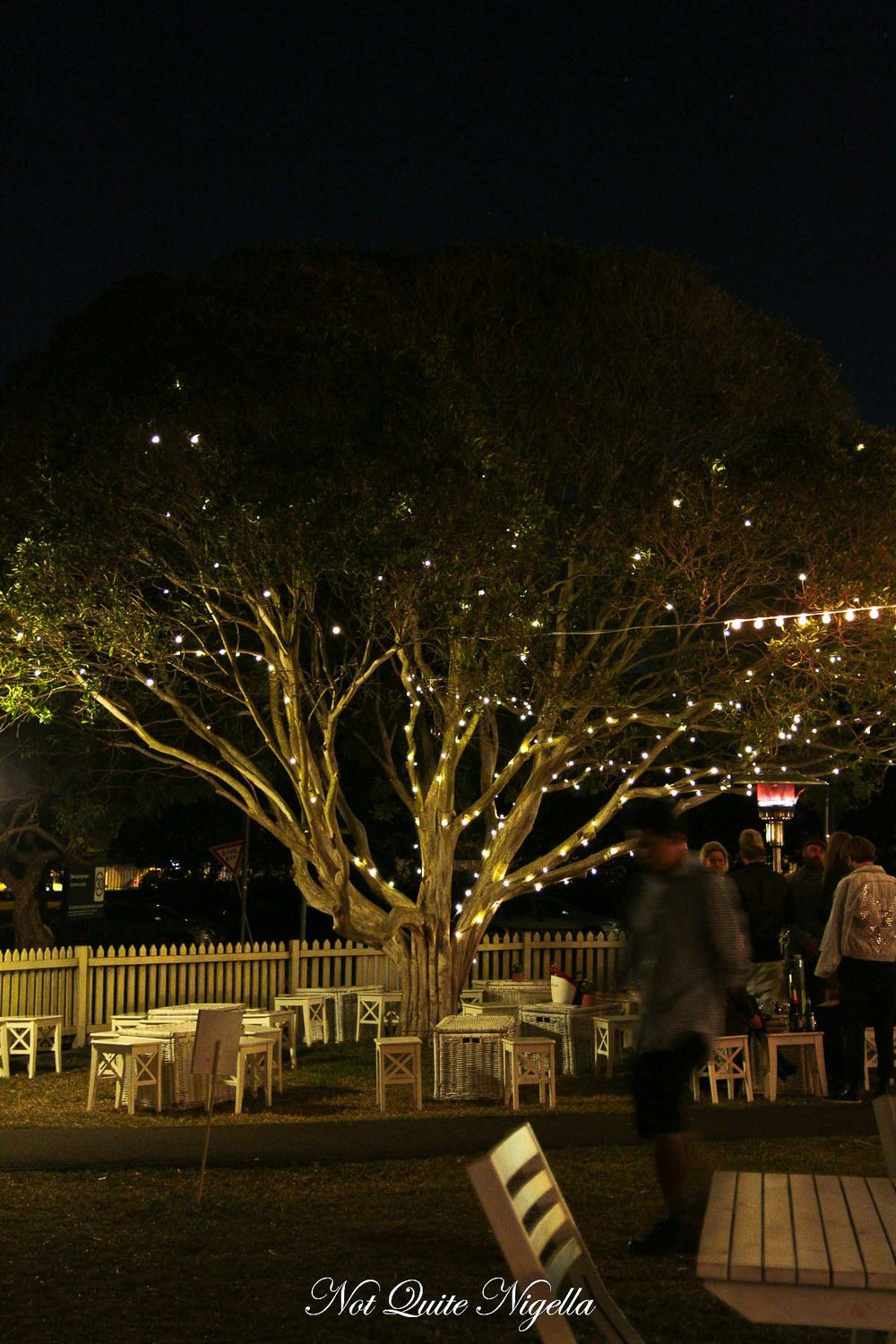 We start with drinks-I do a double take when I see giant jugs of cocktails for $95. There are two sized jugs and the giant jugs are big but $95 is quite a price. There is also Mumm French champagne for $95 a bottle, beer for $9 and other drinks. We go for a small jug of the Elyx English Godmother Pimms cocktail. It's just after 6.30pm and we're mid happy hour although there are no signs saying so and when we come to pay they tell us that our drinks are half price so canny Louise suggests that we order another jug, the next one is an Elyx Bloody Mary. 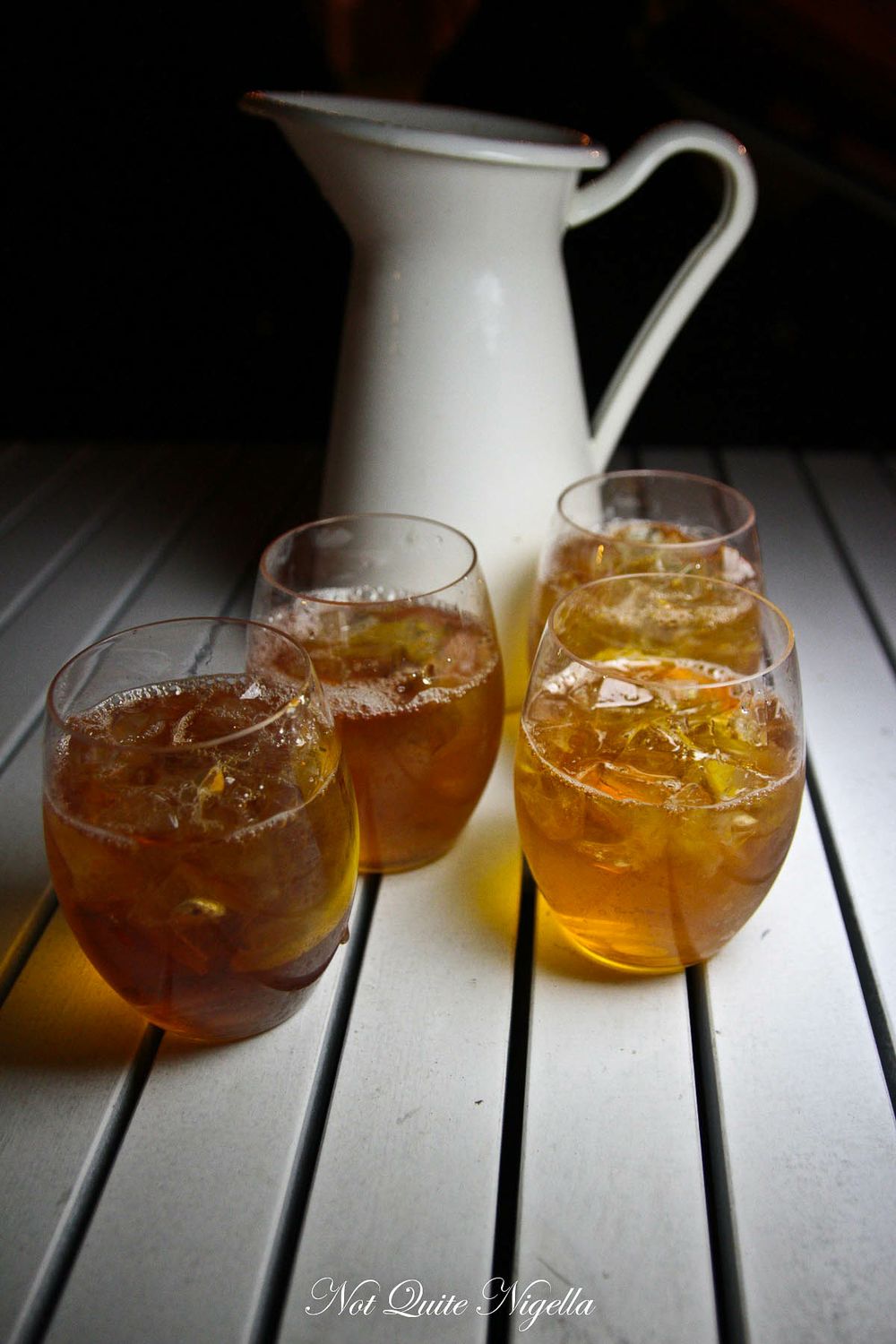 The English Godmother is pleasant and light, like a Pimms cocktail but doesn't have the abundance of fruit and cucumber that you usually get with a Pimms cocktail. It's also very much full of ice. You get about four glasses worth of drink in one of the small jugs and I'm glad that we hit happy hour because Mr NQN gristles at the quantity of ice for the price. 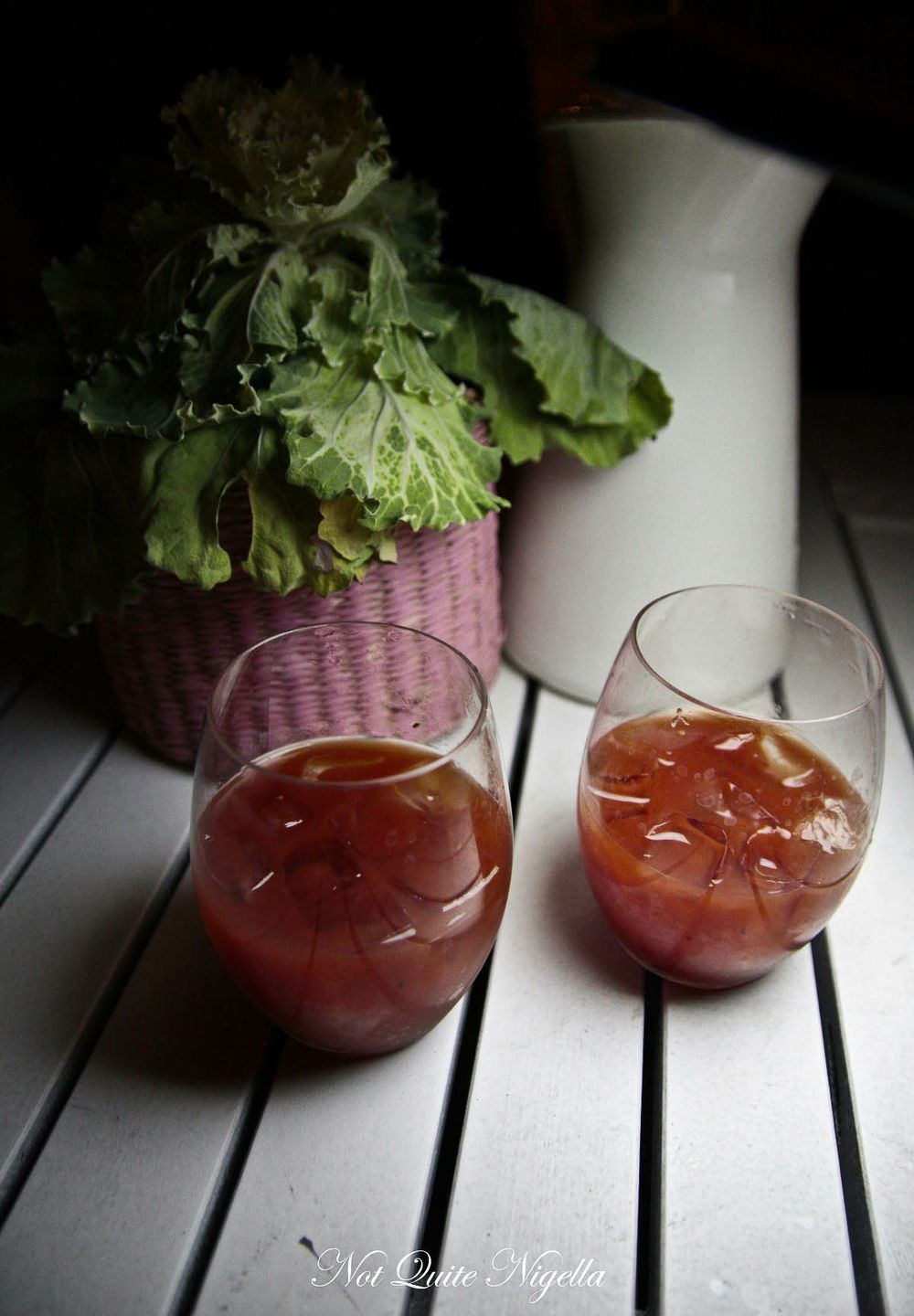 The bloody mary is also ice laden and has a little spice to it that helps to warm us up. I look at half-Finnish Mr NQN and Danish Viggo who are both shivering and Louise and I decide that it's best that we get some food into the poor boys. 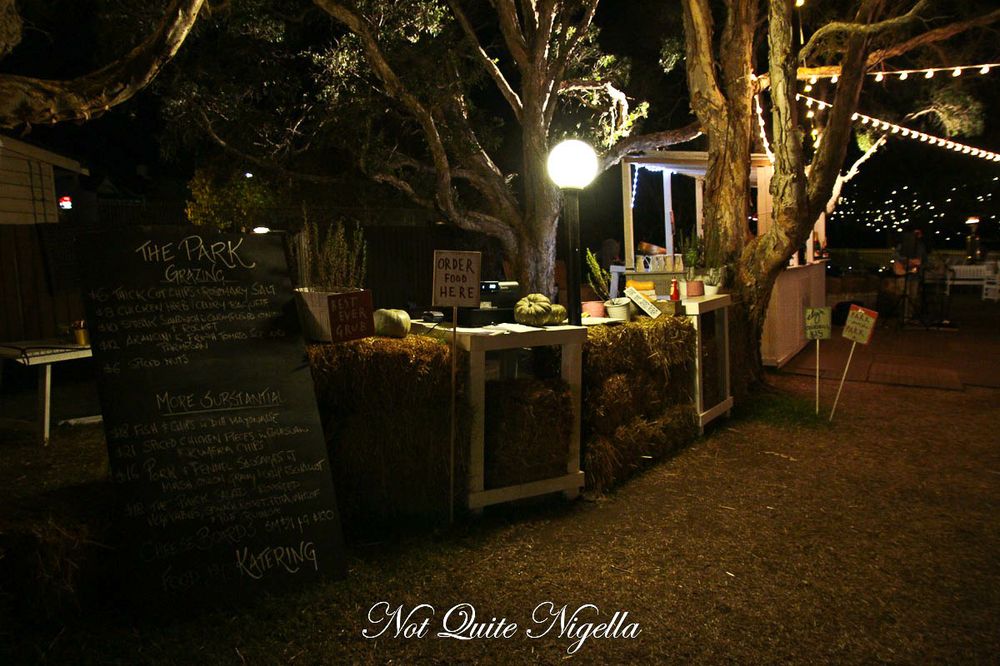 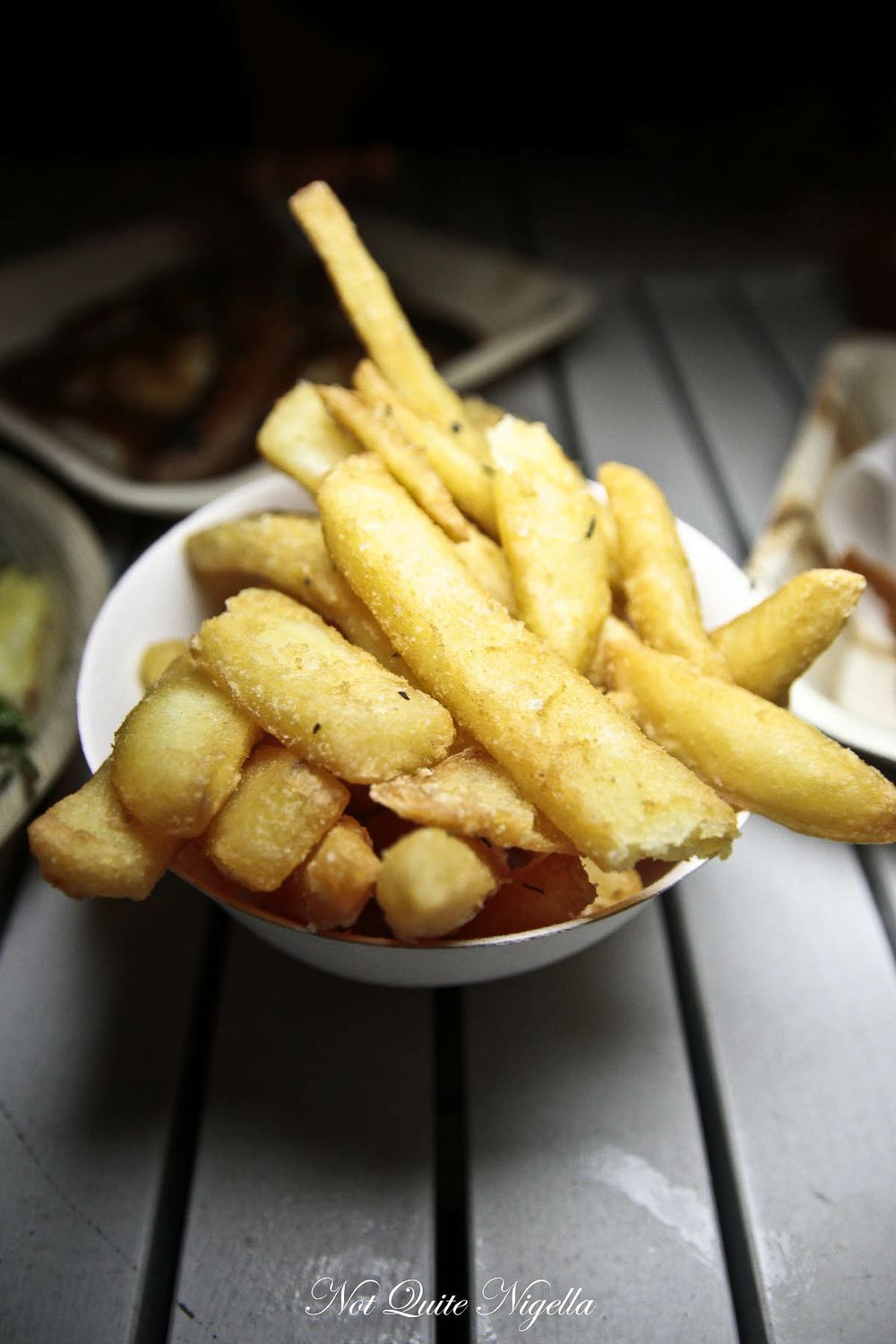 Next to the bar is where you order and pay for the food. Nothing puts warmth in the belly quite like piping hot chips and arancini so we ordered those. The fat chips were excellent, crunchy on the outside and fluffy and soft on the inside. And incredibly warming too! 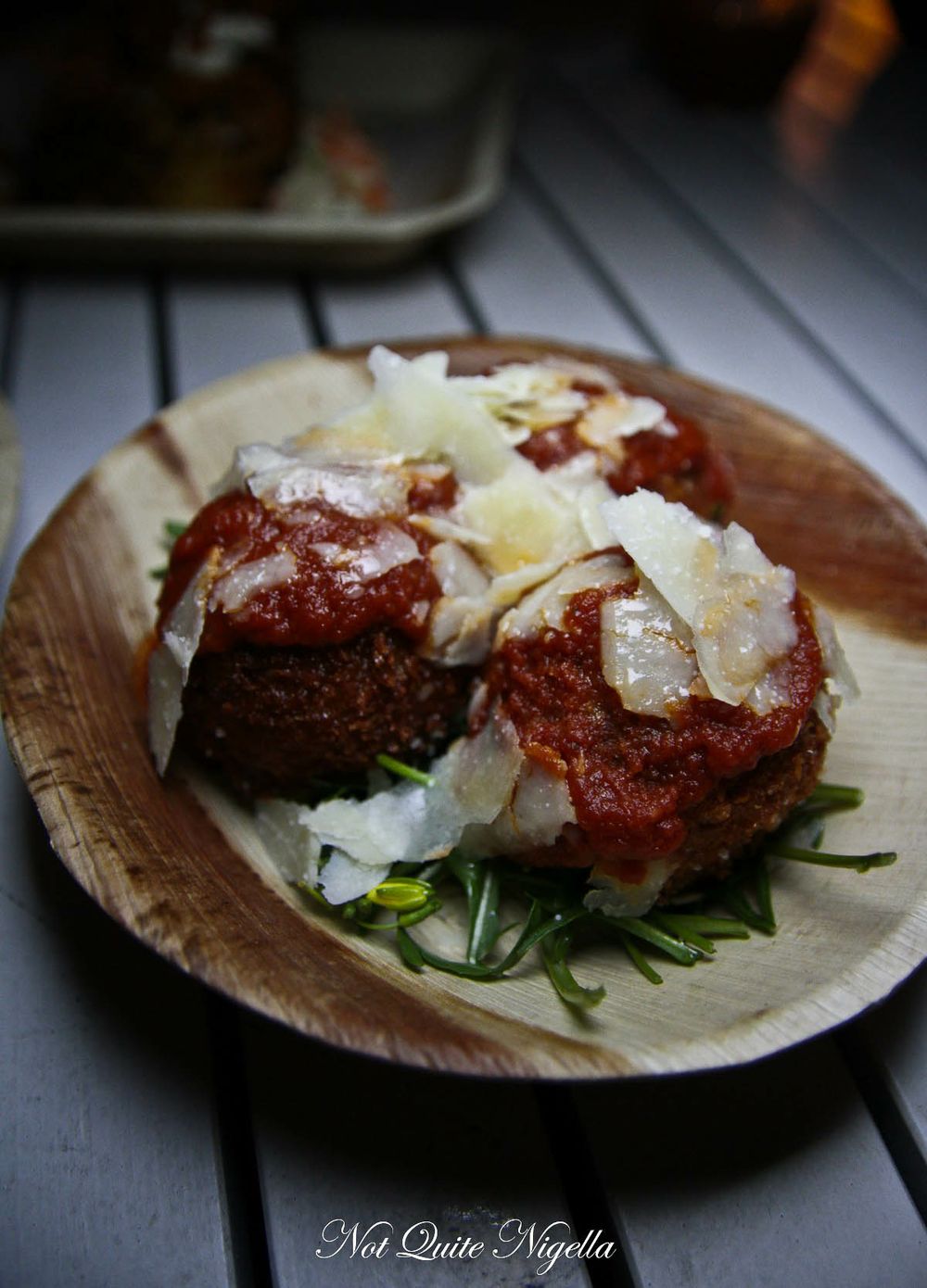 We also enjoyed the arancini which had a lightly crispy outer, cheesy risotto rice inside and a thick, rich tomato sauce and shavings of parmesan. 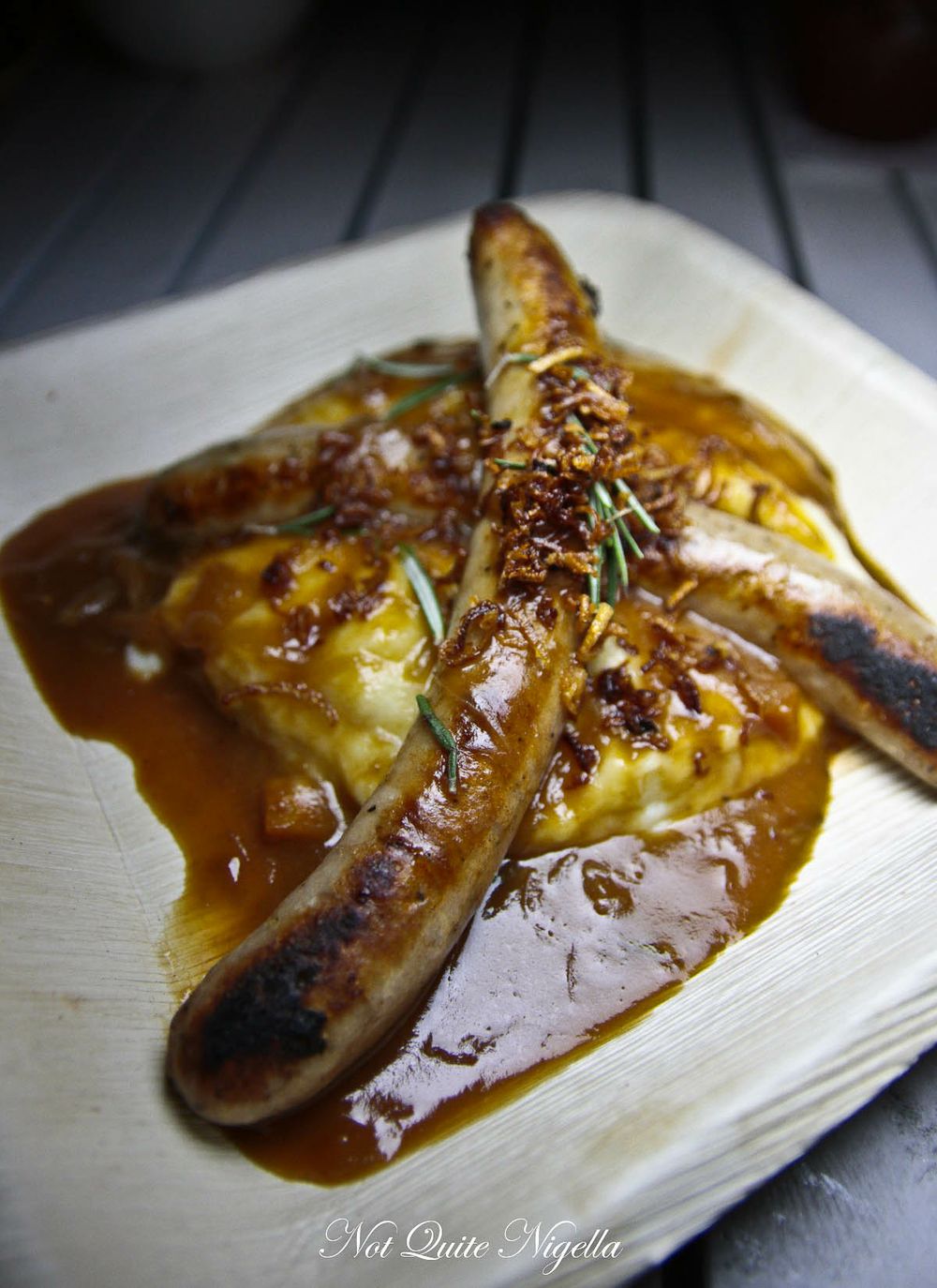 Oh dear, that's a slightly odd photo angle isn't it? Whilst the sausages were quite nice, I wasn't quite as taken with the mash and we thought that this was quite a plain dish compared to the rest. 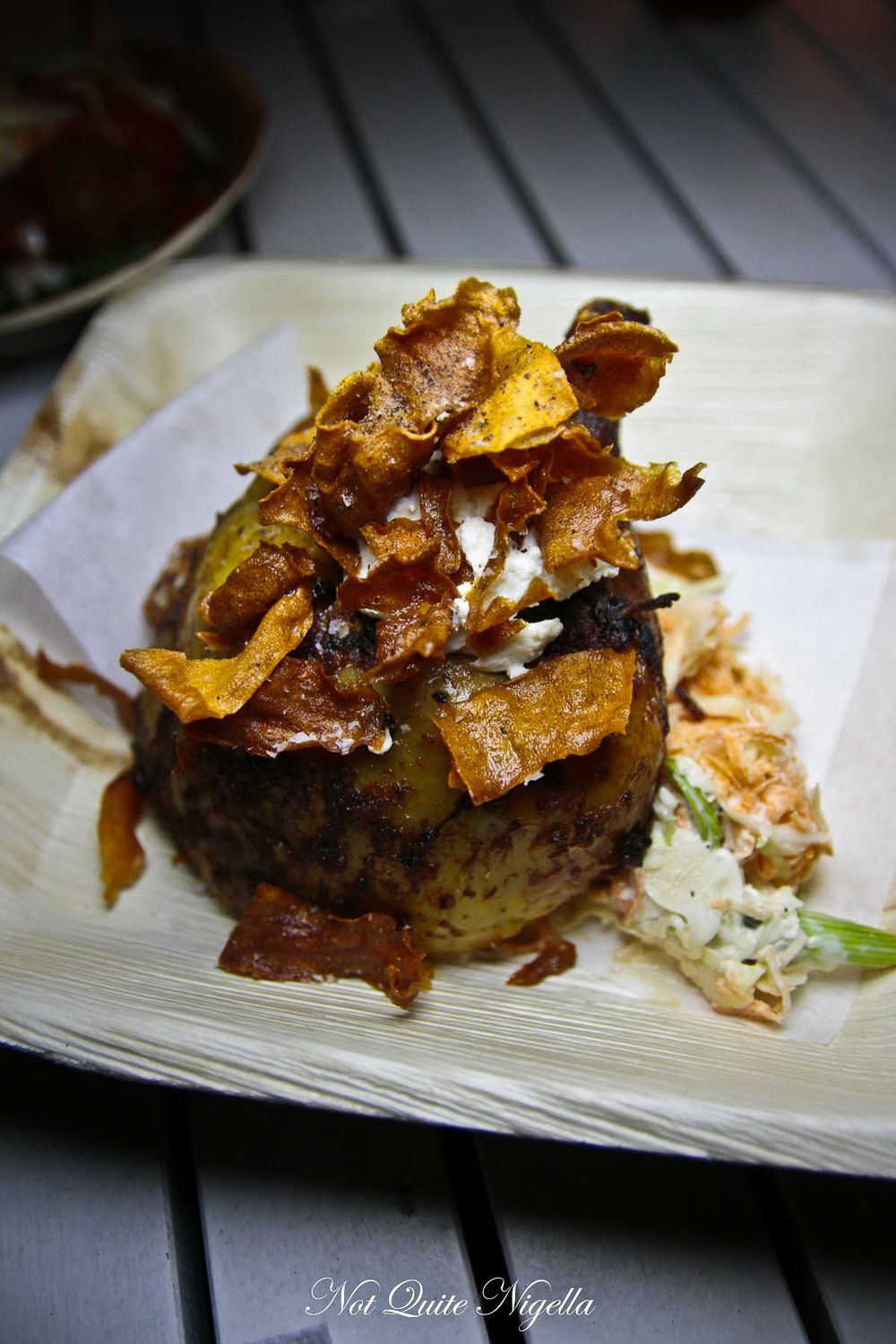 The chicken was actually one piece, a quarter of a chicken with Moroccan style spiced served with coleslaw, kumara chunks, labneh and kumara chips. The chicken itself was really quite good and I thought when compared to the sausages above a much better value for money dish. However it was difficult to eat with the wooden fork and knife on the bamboo plate and you really had to use hands to extract all of the meat off the bone, especially as the hot food got cold very quickly in the chilly night air. 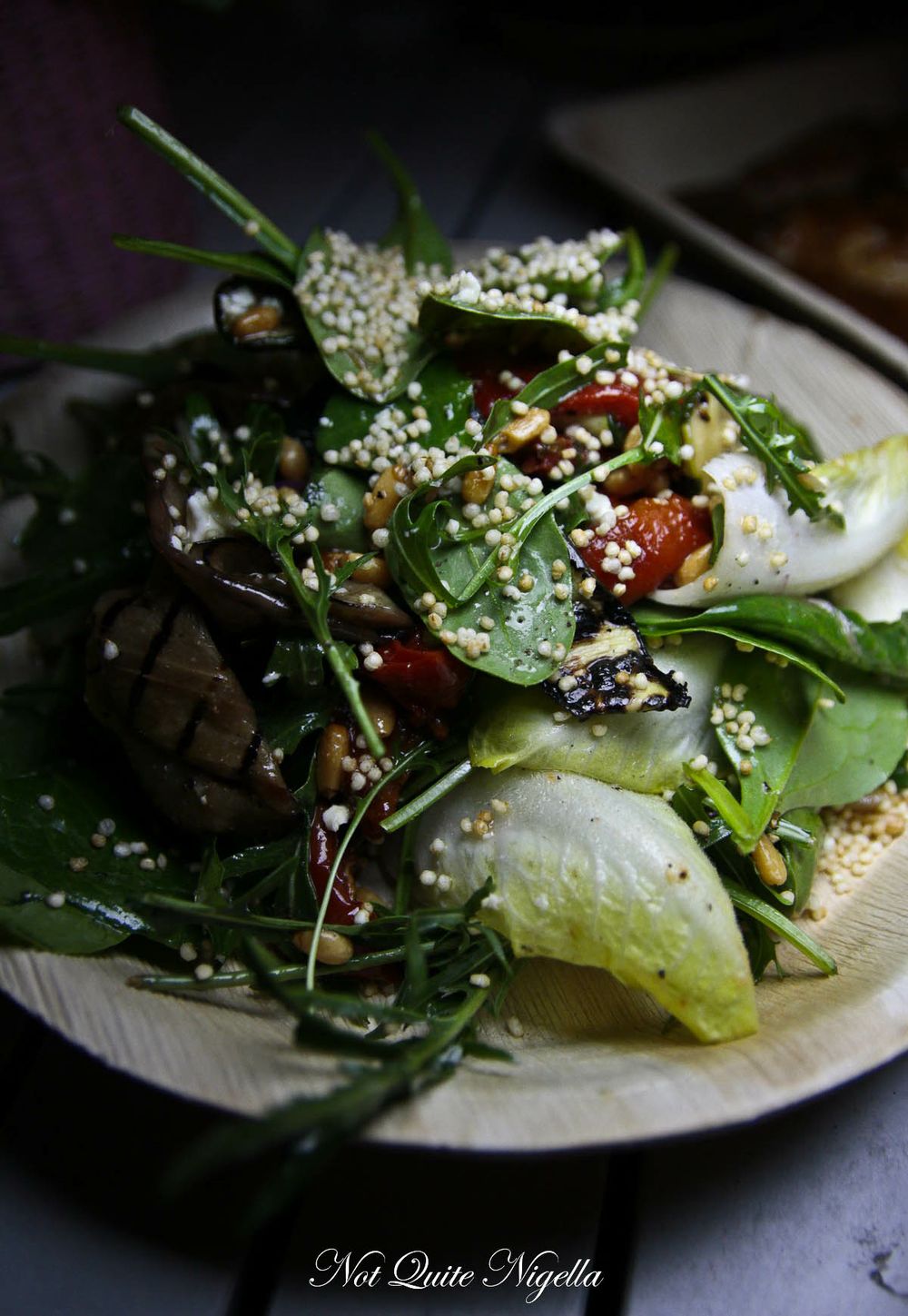 Vegetables seemed like a good idea and this was a dish that didn't matter if it got cold. This was a salad with marinated eggplant, zucchini, baby spinach, rocket, feta, witlof and red capsicum and some crunchy quinoa on top. It was also good but I really wished it had transformed into a warm vegetable stew or curry because a cold salad on a cold night wasn't perhaps the wisest choice but we wanted to make sure that we got our vegetables.

By now Mr NQN and Viggo don't look any warmer so we decide to go up the road to Max Brenner's for a hot chocolate and some warmth. This was also because there was one dessert offering, a cheese board for either $21 or a large one for $100! I did a slight double take, I wasn't quite sure what $100 buys you as far as a cheese board is concerned but Nina did report that one that she saw brought out was enormous. 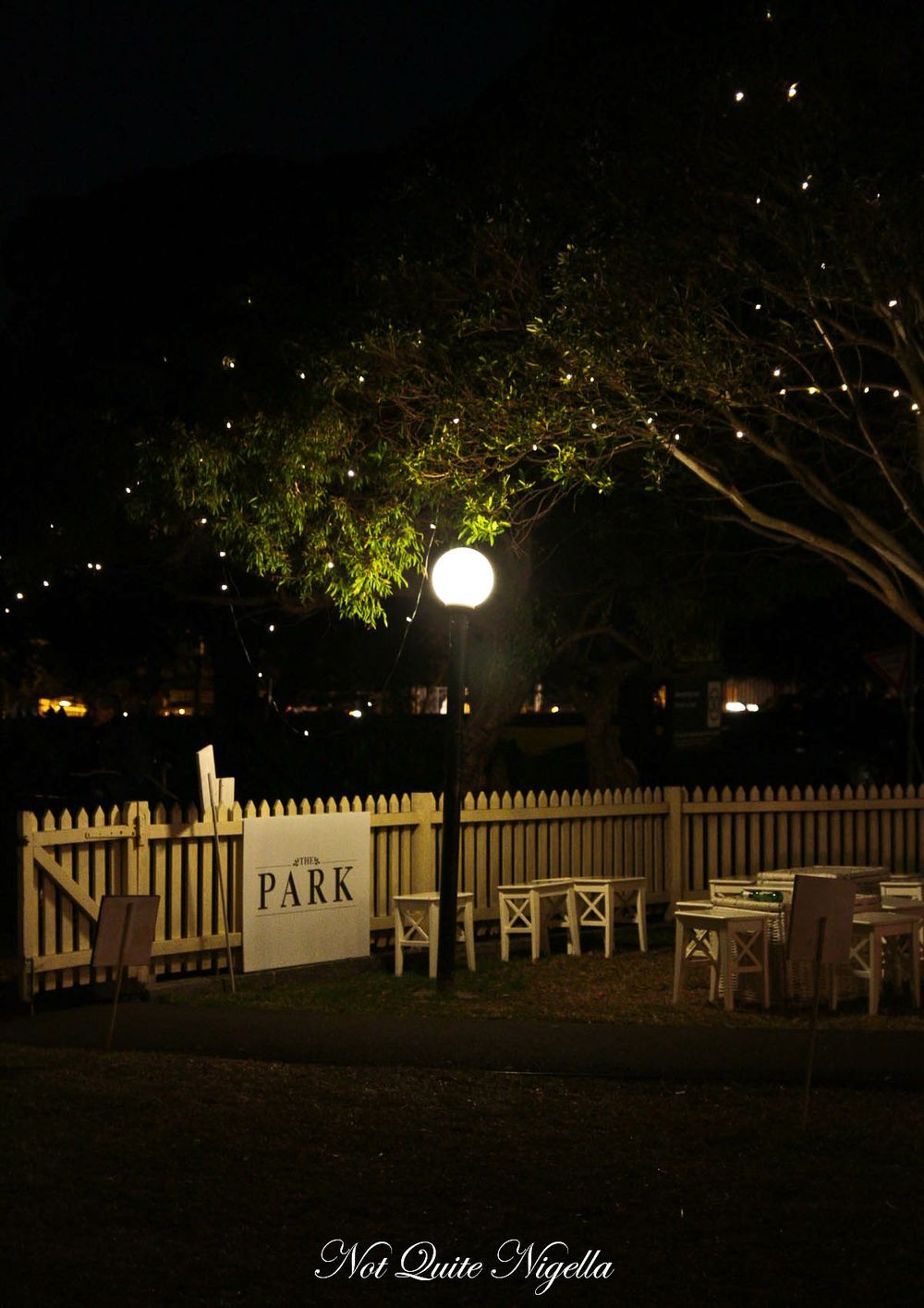 Heading towards nearby Oxford Street we reach Max Brenner. I don't think the boys were impressed when I asked them "Should we sit outside?" and I noticed a momentary look of horror on their face until they realised that I was joking. Sitting in as far in as we can get, I take a look on the menu for my favourite thing here: the chocolate lick. For $2.50 you get a small tub of melted chocolate (white, milk or dark) and that's just enough to satisfy but not over indulge. Service is very friendly and sweet and we take a look at the chocolate shop which looks nice but is a little on the pricey side, especially for the small tins of chocolates.  I love their waffles but Louise is less smitten so we compromise with a hot chocolate drink each as well as splitting a fondue for two and a banana and praline crepe with ice cream. 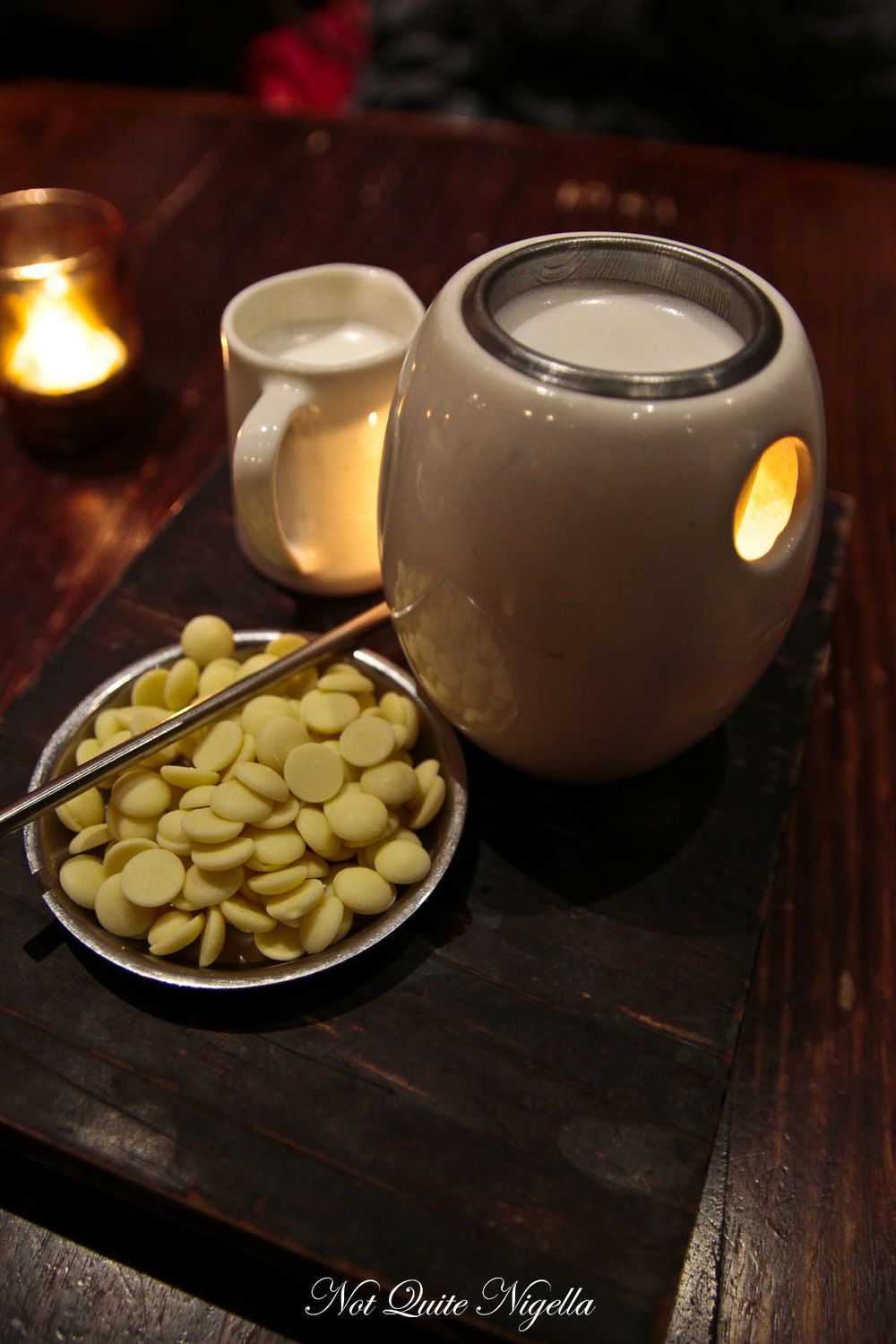 I haven't had white chocolate in about half a year and when Louise ordered hers, I decided to get a Suckao, that mix it yourself hot chocolate with a cup of milk kept warm by a tealight and a serve of chocolate drops and extra hot milk. You stir in as much chocolate as you want and stir and suck it up through the spoon slash straw. 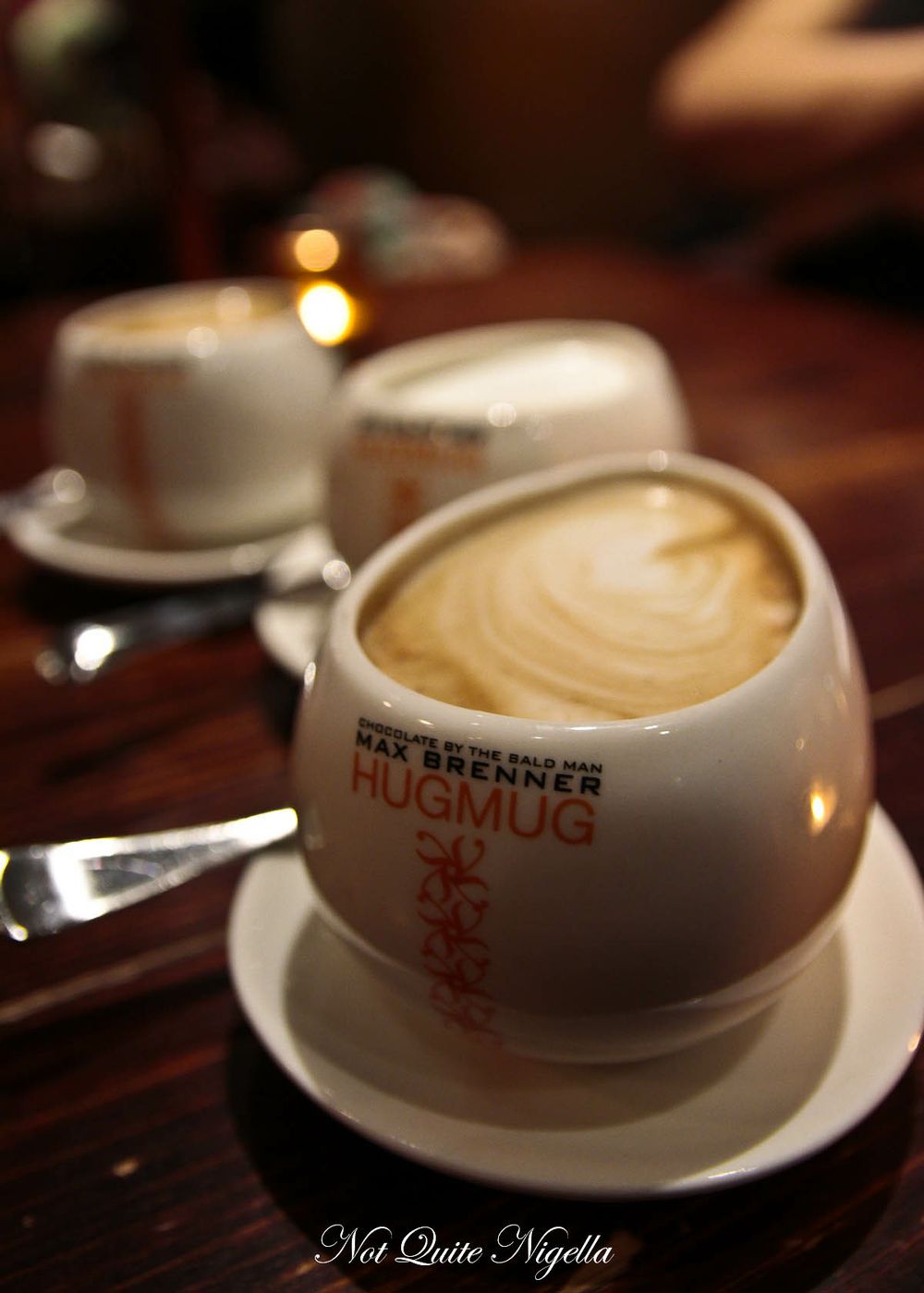 Mr NQN's coconut chocolate tasted just like a liquid version of coconut rough chocolate. It came in one of the ergonomic hug mugs. 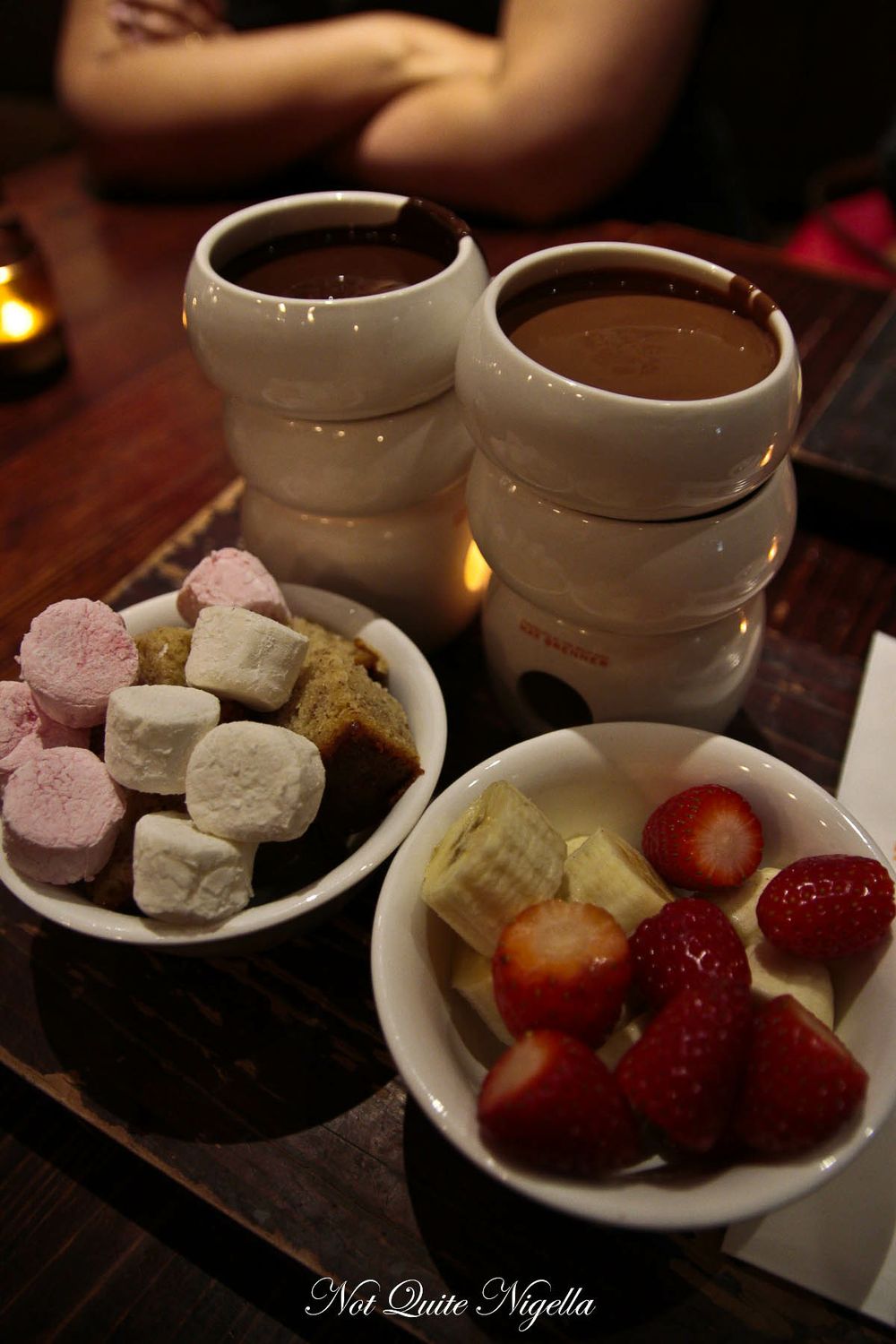 The fondue comes with chunks of banana bread, marshmallows, banana and strawberry and with a small tub of milk and dark chocolate. It's actually just the ticket to warm us up and I particularly like the banana and marshmallows in the chocolate. 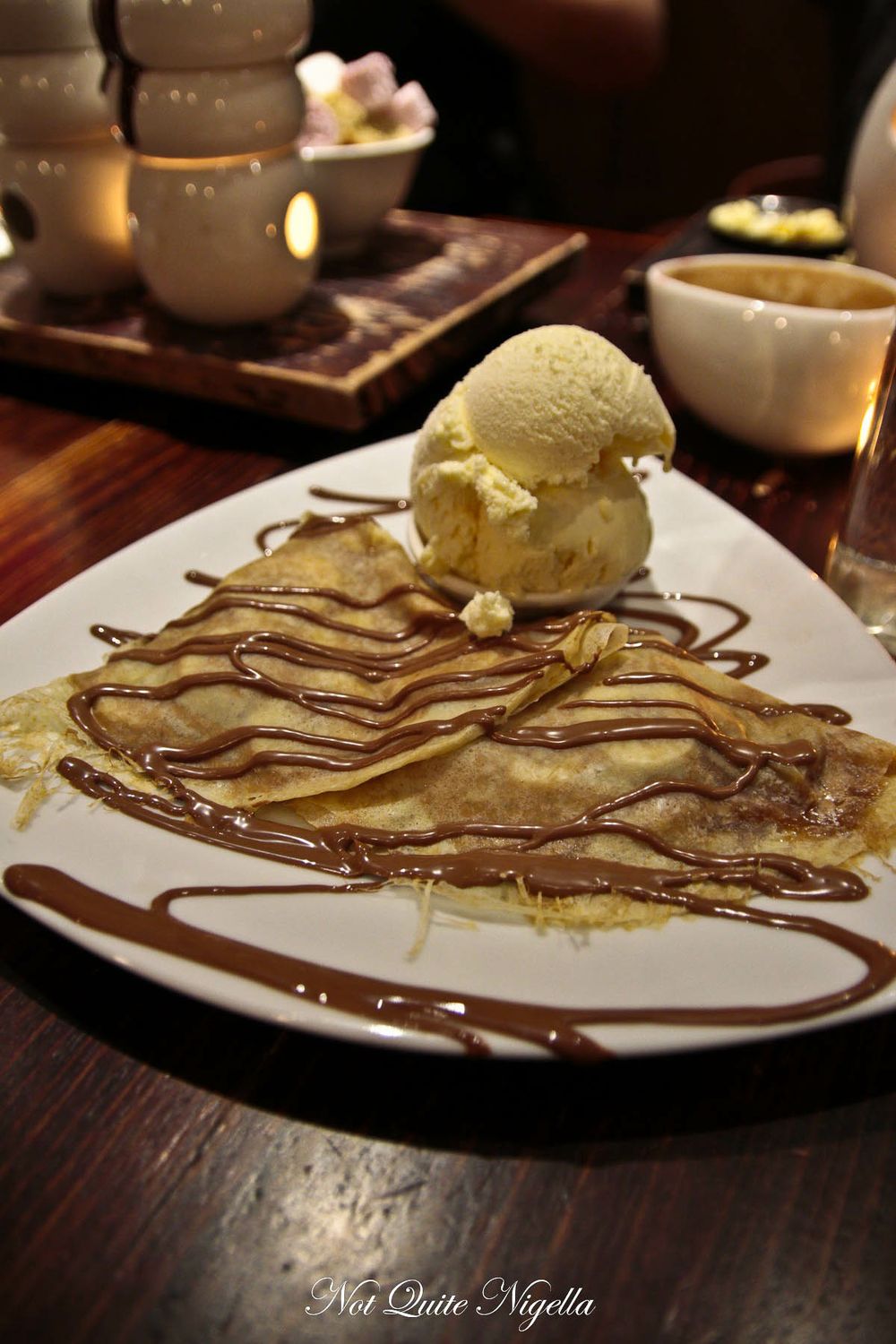 The banana praline crepe was really more hazelnut gianduja than nutty praline (I thought that it might be toffee praline) but the crepes were paper thin and delicate and came with a generous couple of scoops of ice cream. Just what we need to warm ourselves up and face the cold, blustery air outside.

So tell me Dear Reader, would you be curious enough to order the $100 cheese board? Do you try and get to places during Happy Hour? And on chilly nights, do you prefer to sit indoors or outdoors? 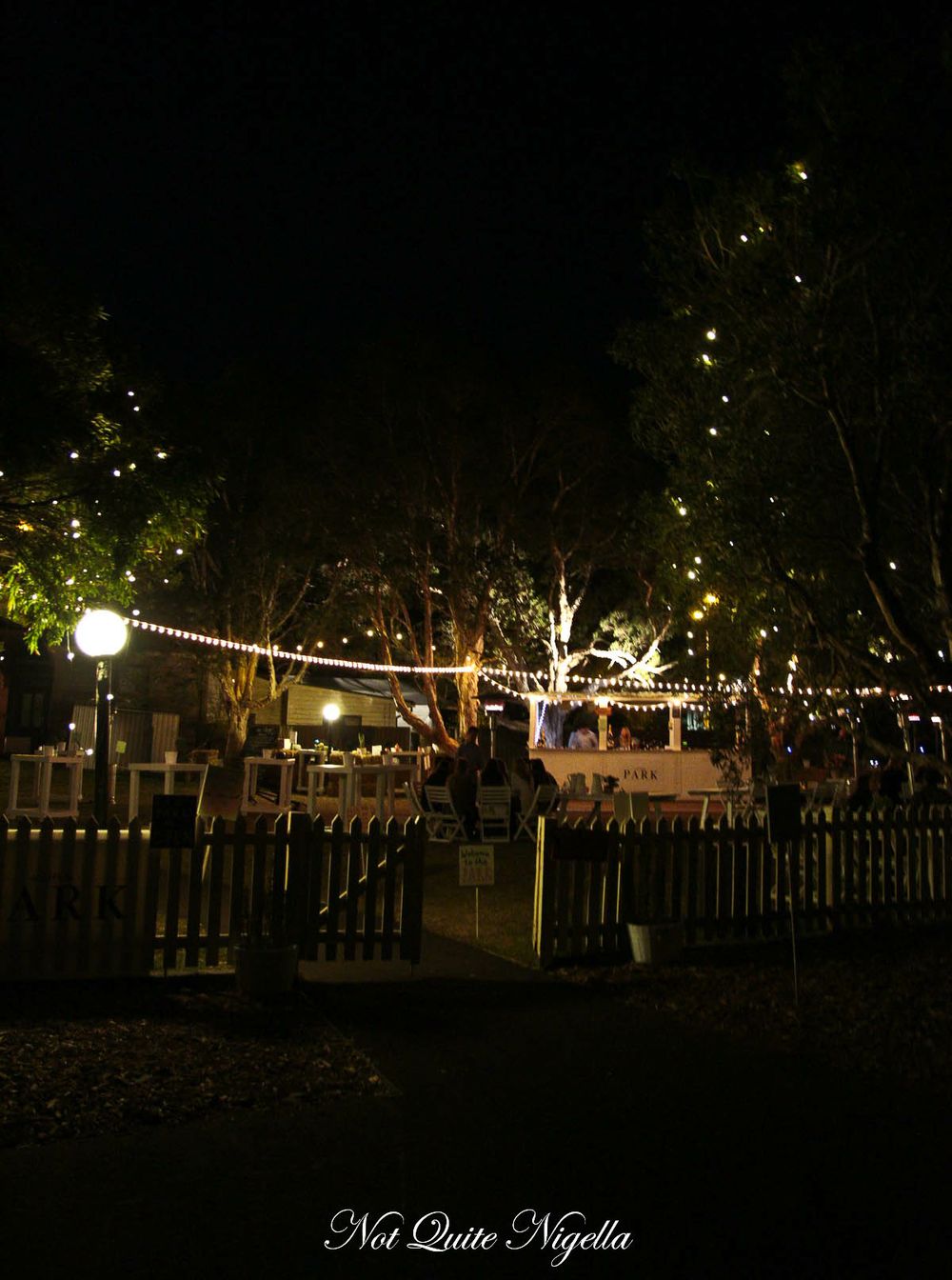