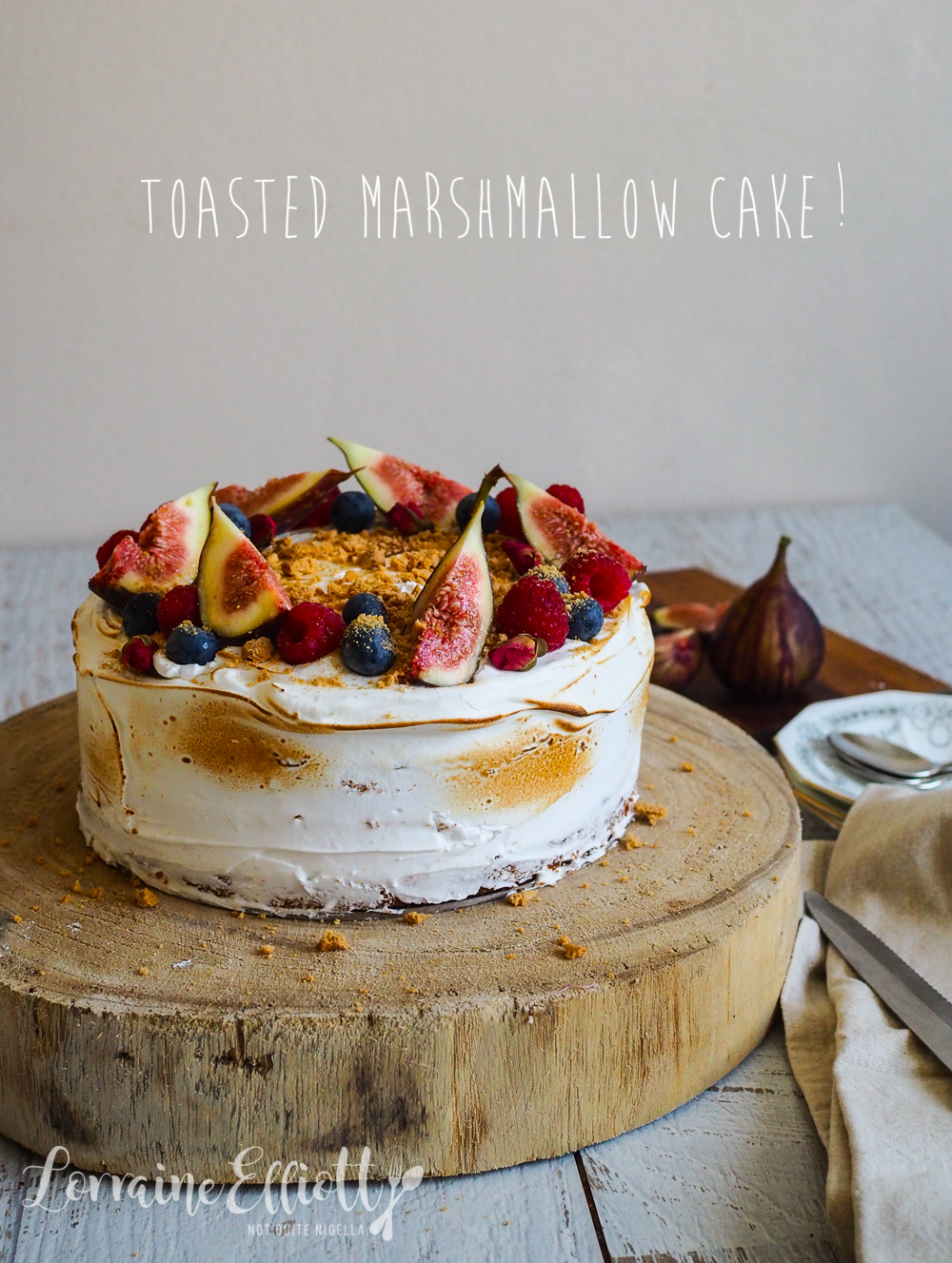 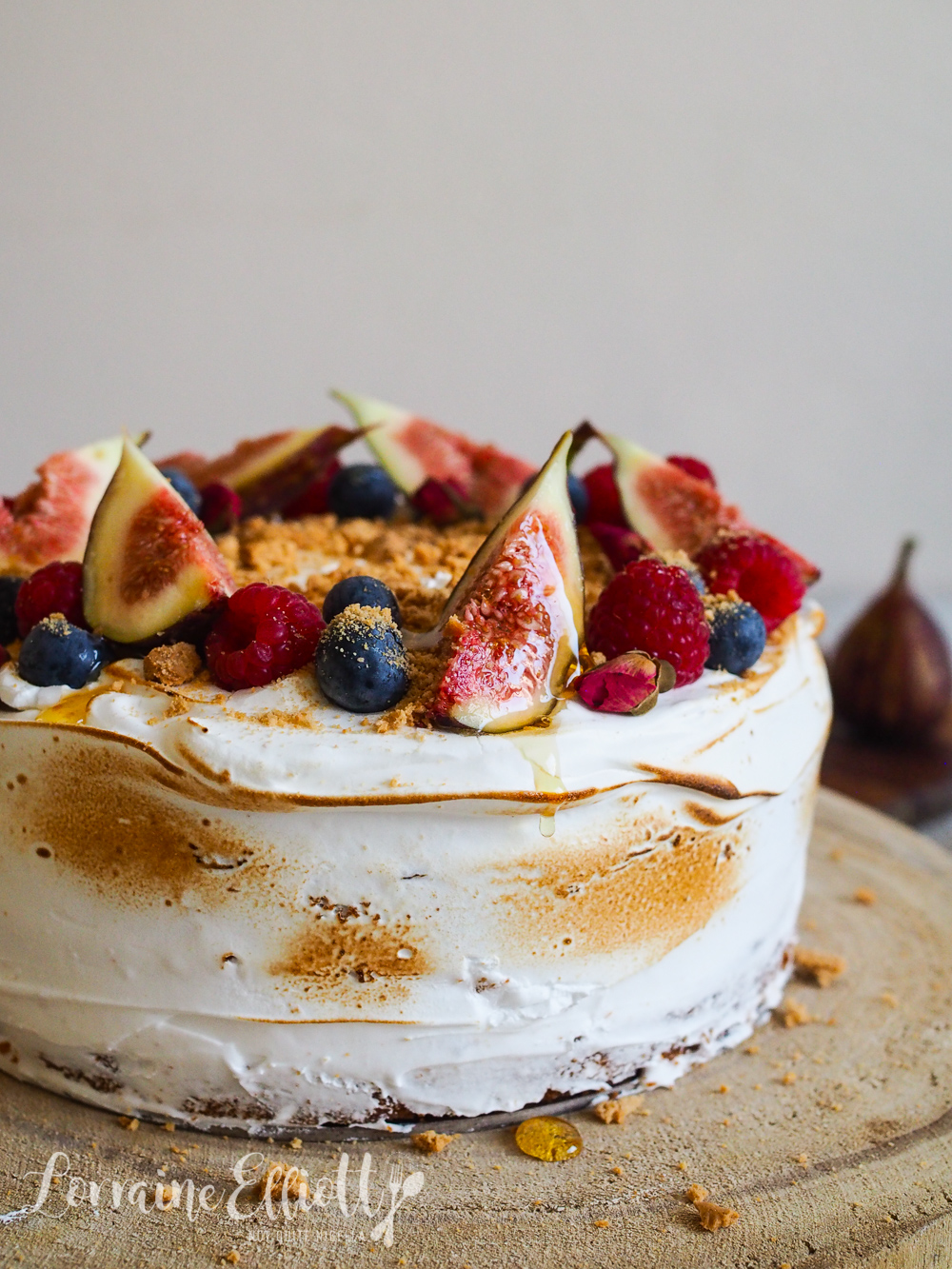 The fruit was originally to decorate a crème brûlée. I was shown a crème brûlée recipe in New Caledonia - the chef detailed only the ingredients and a brief method but no temperatures. And the ingredients and method were fairly different to other crème brûlées but the chef swore by his recipe to make the perfect one. So with those words I decided to reproduce his recipe but guestimated the temperature. Well I can say with confidence that I also swore by his recipe but in a totally different way. It was an unmitigated disaster. 10 egg yolks and litres of milk and cream went down the drain. It was nothing short of a woeful waste of great ingredients. And the fruit that I had bought to top it with went unplucked from the fridge shelf.

So I had egg whites now so I decided that now was as good as any to try to use up the cream, fruit, half dozen biscuits and egg whites that I had and to make this as a S'mores toasted marshmallow cake. And I have to say that I am so much happier for it because what could have been a plain butter cake became so much more. In fact I don't know anyone that wouldn't love this cake. There's the perfect ratio of ganache to cake and the frosting on the outside and crunch of the cookie gives this so much texture. It's inspired by S'mores and is true to flavour. And I was glad to clear out my fridge of items before I went to Texas. 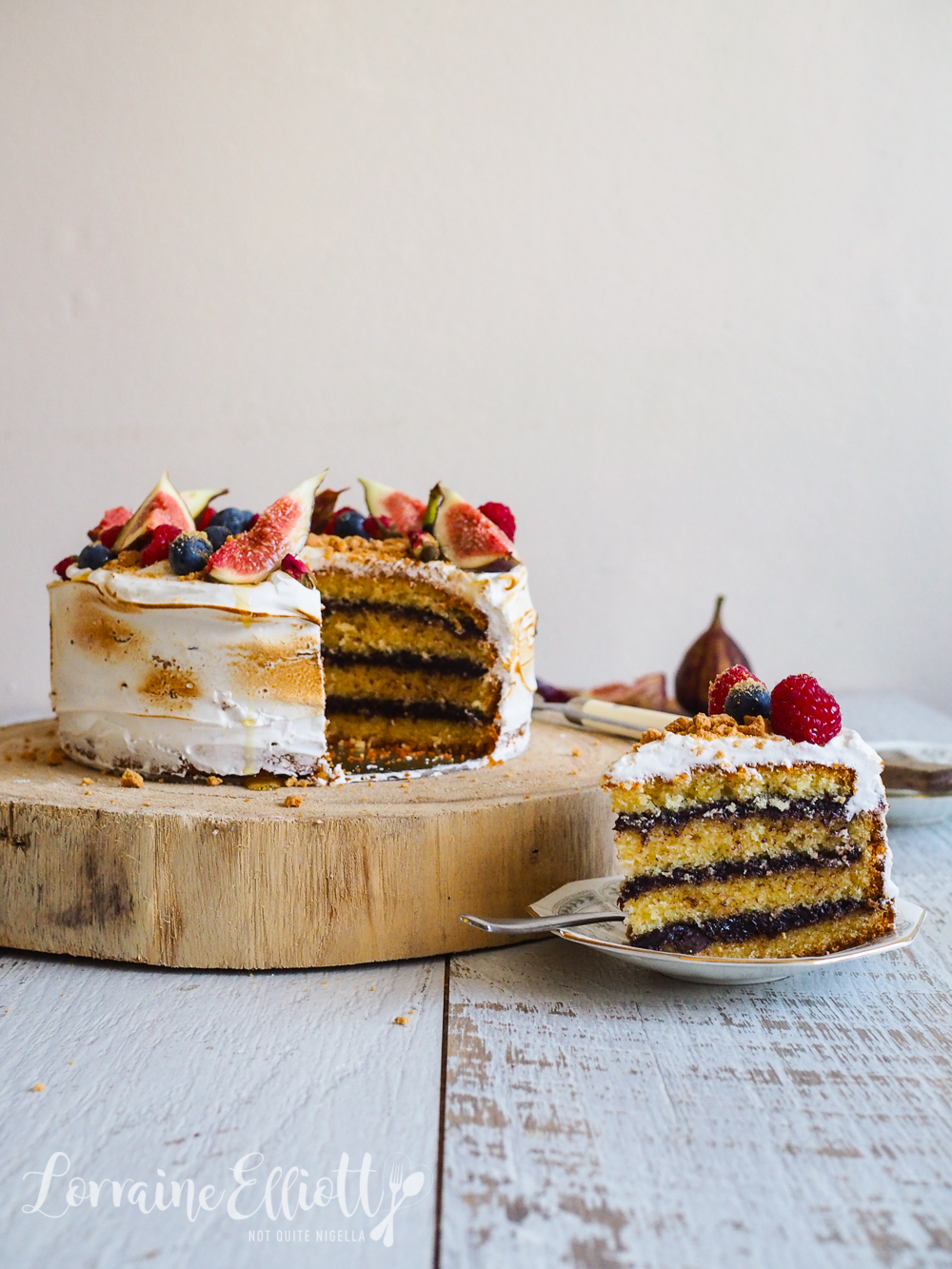 I spent 7 days travelling around Houston, San Antonio and Austin. There were six of us: four writers and two PRs. On every trip you never know how well you will get along with people and 7 days is a long time if you don't really get along. But this group were wonderful and we all clicked and had a great time. I got on especially well with one writer Kristie because we have the same sense of saucy and outrageous humour and an appreciation of the ridiculous. Another bond was formed with another writer and a PR who shared the last name Campbell and they became like an inseparable brother and sister team.

Every time Kristie and I would sit together we would erupt into fits of giggles, snorts and guffaws. One day we were given a few hours of spare time so we hit the food trucks. Except we found each other so entertaining that when we would walk down the street we'd be bent over with laughter our stomach muscles aching from laughing, smile lines deepening but not caring. I'm sure people thought that we were inappropriately drunk so early on in the day, stumblin' around like fools. 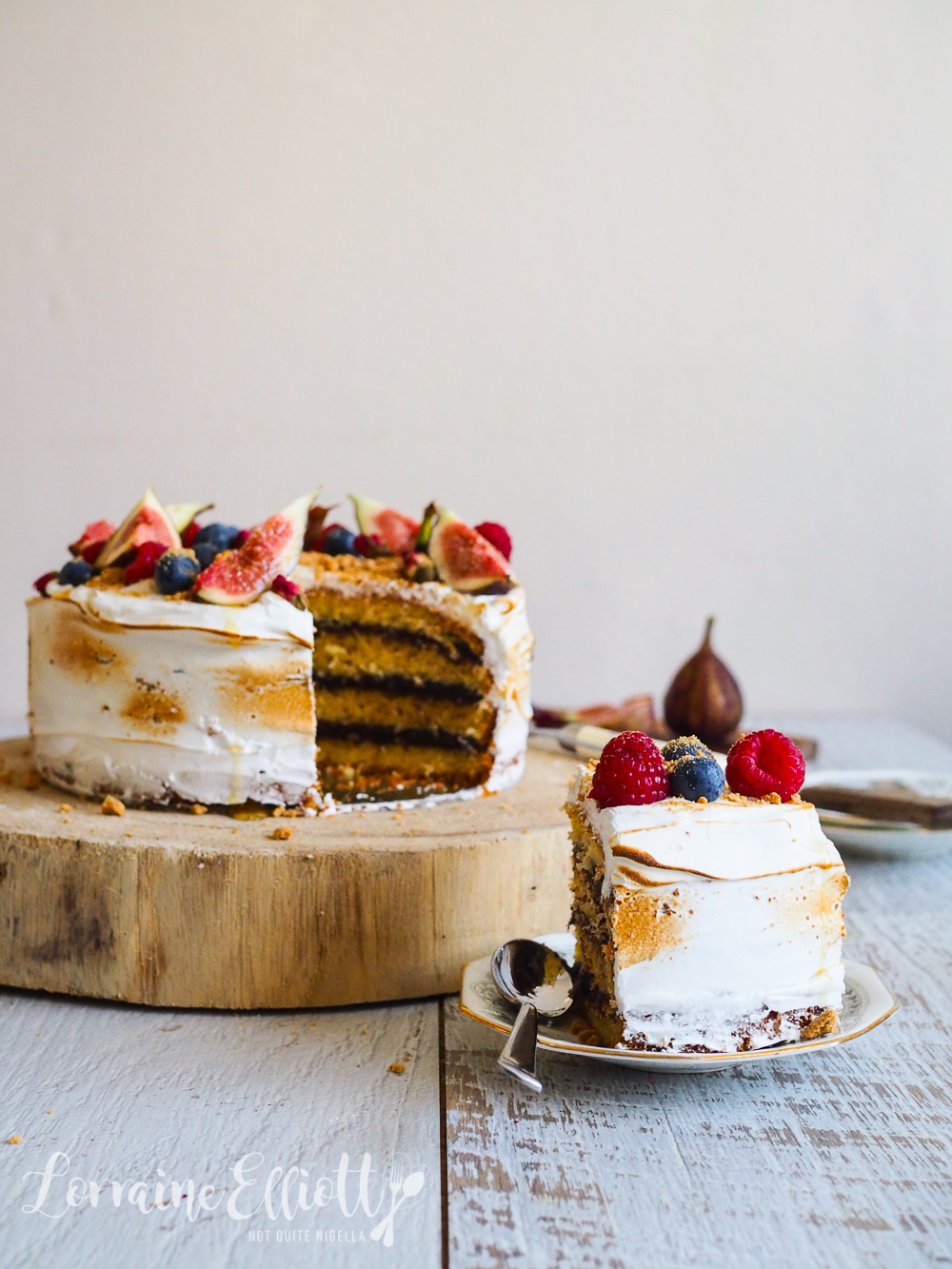 One evening we were in Austin at a cool little live music club. A singer was singing the blues and an electric guitar was wailing. We were talking about how well the other two were getting on as they were taking selfies together. And just like in a movie there was a sudden lull in the music just at the same second that Kristie was yelling, "IT'S THE CAMPBELLS!!!". She was yelling because the music was so loud but in the still, sudden silence of the room her voice reverberated loud and clear.

Even the singer heard as he was taking requests at that point which was why it was so quiet. "Did someone say The Campbells?" but he didn't know any blues songs by the Campbells. And yet again we found ourselves doubled over with laughter, tears streaming from our eyes. Life is very fun and ridiculous and yes my only advice is to have fun. Eat life up and laugh. And eat the S'mores marshmallow cake.

So tell me Dear Reader, have you ever laughed so hard that you couldn't stand up? Do you like S'mores? Have you ever had an absolute cooking disaster where you had to throw the entire thing out? 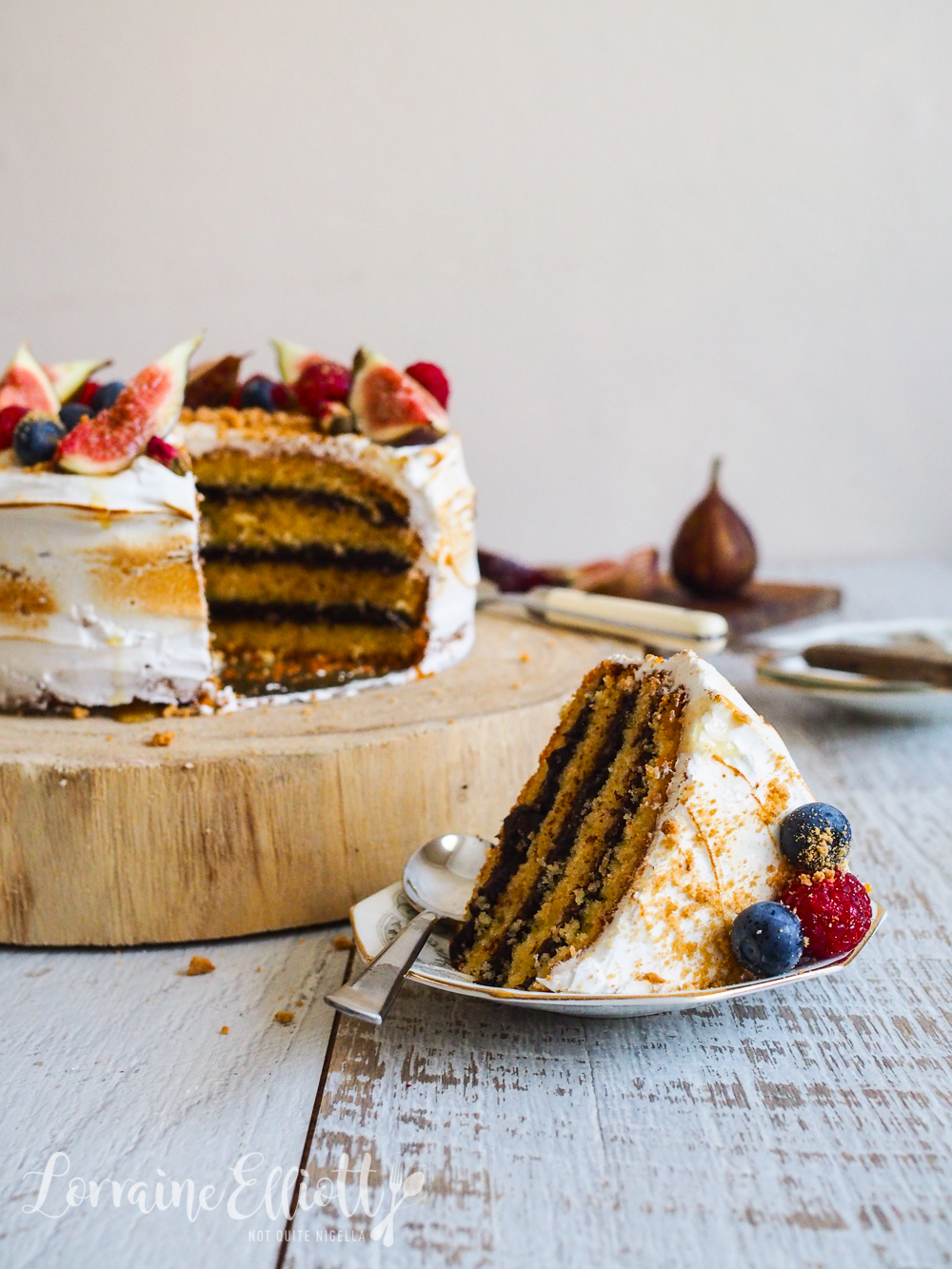 Step 1 - Preheat oven to 170C/340F. Line a round 20cm baking tin on the base and sides with parchment. Using a whisk attachment (not a beater attachment) whisk the butter and sugar together until white and resembles whipped cream. Add the eggs, one at a time and, and whisk until combined. It shouldn't be separated but it will look fluffy (see pic).

Step 2 - Add the milk. In a jug or bowl use a hand whisk to mix the flour and baking together. Then using a spatula and by hand then fold in the cake flour and baking powder. Spoon into the prepared tin and bake for 1 hour and 5 minutes or until the middle springs back when touched. 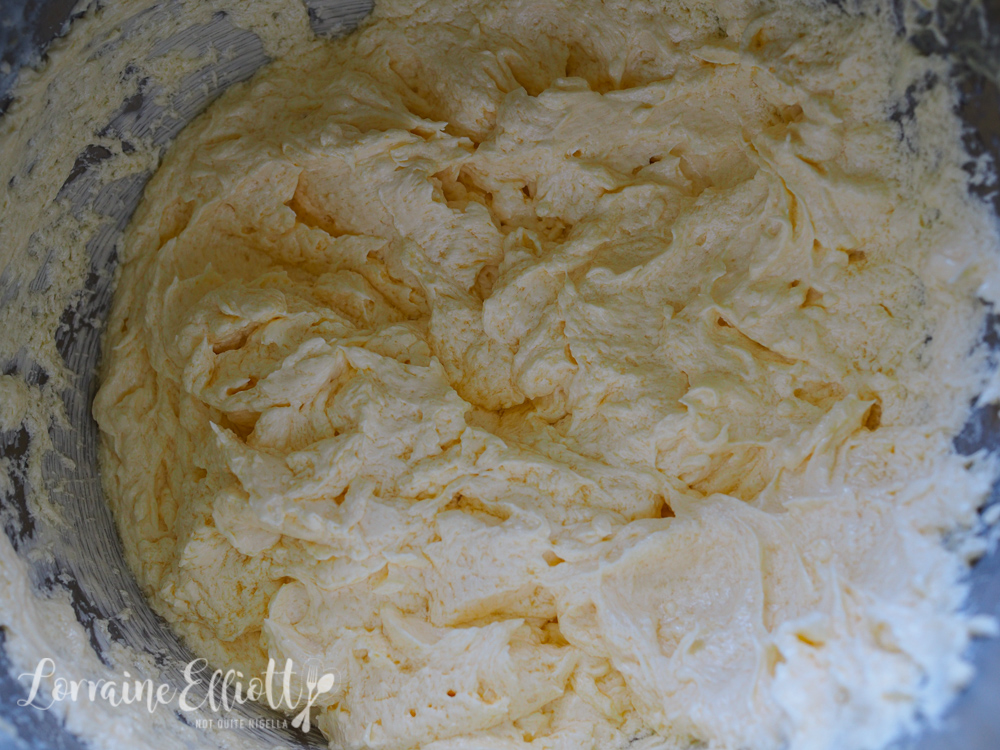 Step 3 - Cool in the tin for 5 minutes and then cool on a rack. Slice into four layers.

Step 4 - Heat the cream until almost boiling and then pour over the chocolate and stir until smooth. Place in the fridge and allow it to set a little until it becomes a thickish but still spreadable consistency. Spread across three of the layers and top each layer with the cookie crumbs. 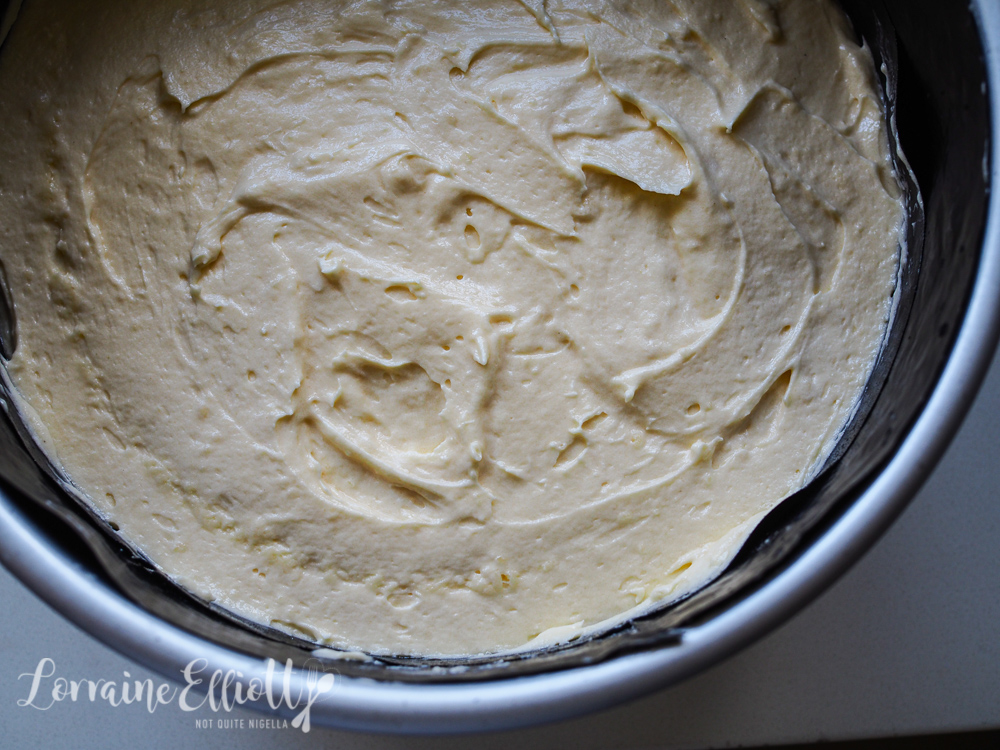 Step 5 - Using a whisk attachment, whisk the egg whites until you soft peaks. Add the icing sugar and whisk for about 30 seconds on low speed and then 5-7 minutes on high speed until you get a thick meringue that doesn't move when you tip the bowl upside down.

Step 6 - Spread over the cake and then use a blowtorch to torch parts of it. Decorate with fruit and more cookie crumbs. 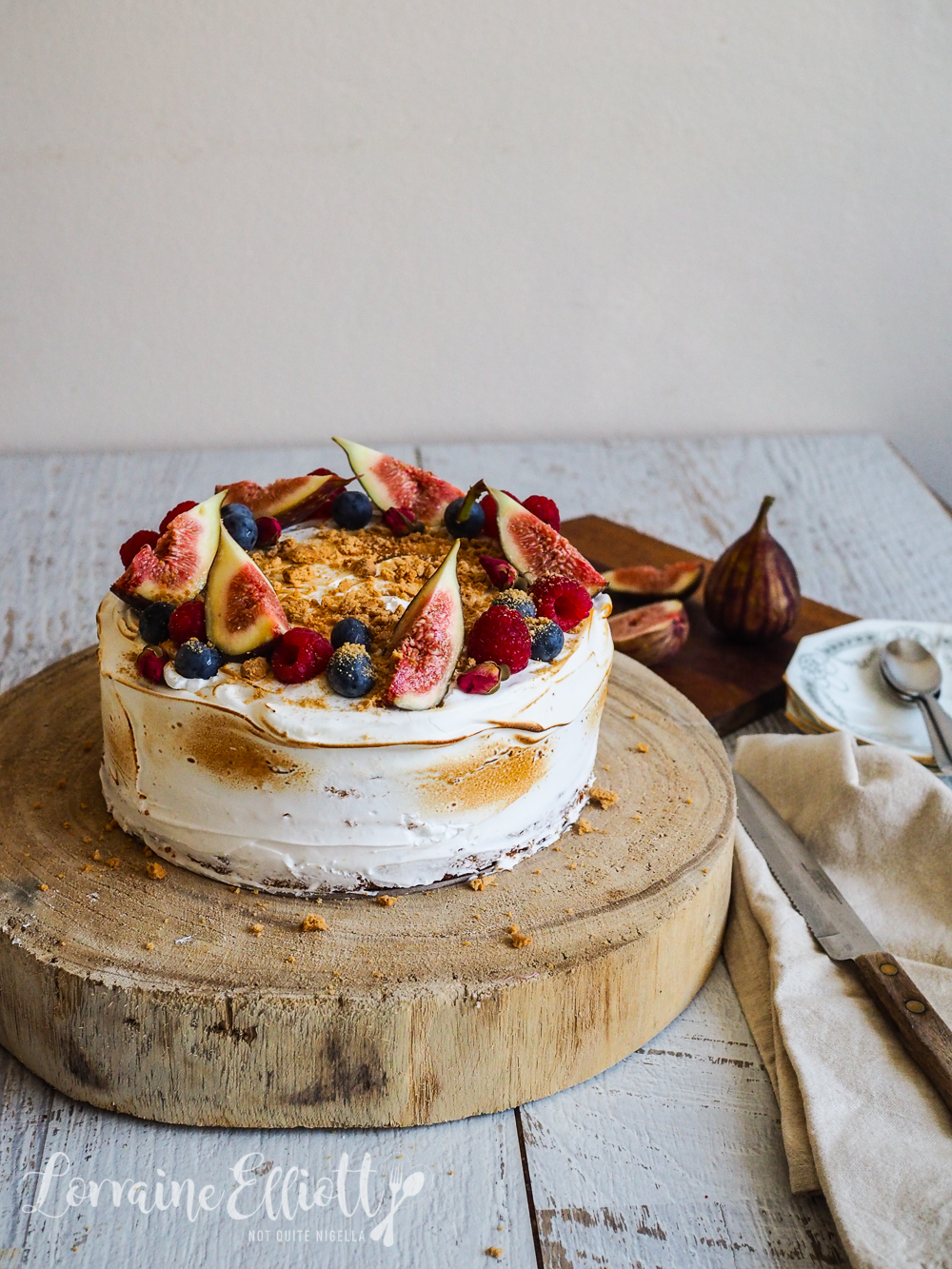