Spring Has Sprung With This Neapolitan Watercolour Cake! 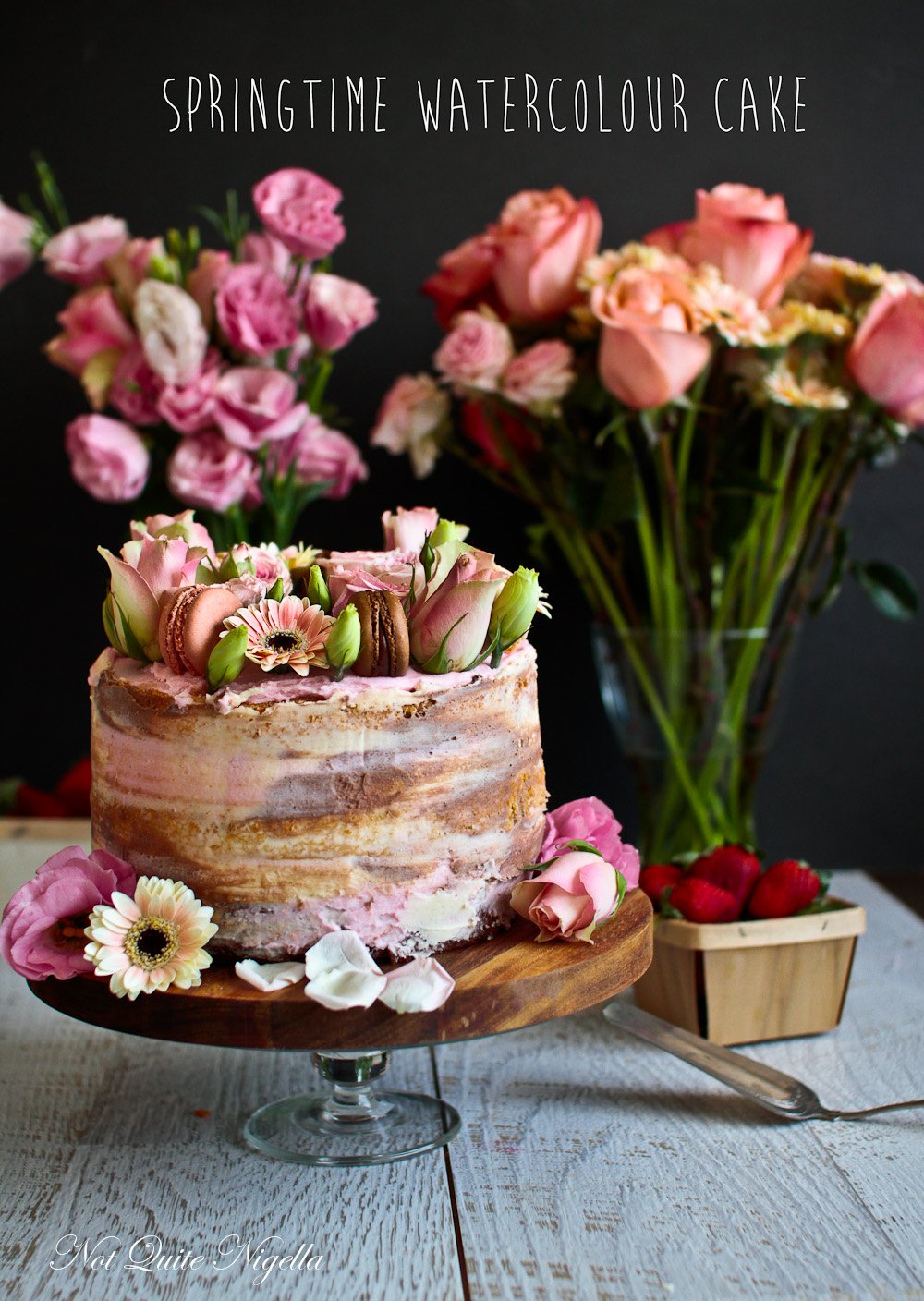 At the risk of sounding obsessive, cake ideas tend to come to me in dreams. Inspired by spring blossoms, I designed this cake for my friend Elly's baby shower. On top are fresh flowers and macarons and on the side is a watercolour effect made using buttercream. I promise that the decoration is surprisingly easy!

I was talking to my trainer Nina about things that couples do in private that they would never do in front of other people. You see I discovered recently that Nina has a soft toy collection. Now she is a personal trainer that wrestles so I guess I would have never expected her to have soft toys. Then I showed her our own soft toy. We have just one: his name is Cappucino (he's a soft toy capuchin monkey) and I think that he is actually alive because he is one of those toys whose eyes follow you around no matter where he is. Mr NQN and I also have a special voice for Cappucino. If there was a fire in the house I'd take my handbag and Cappucino. Oh and Mr NQN of course. 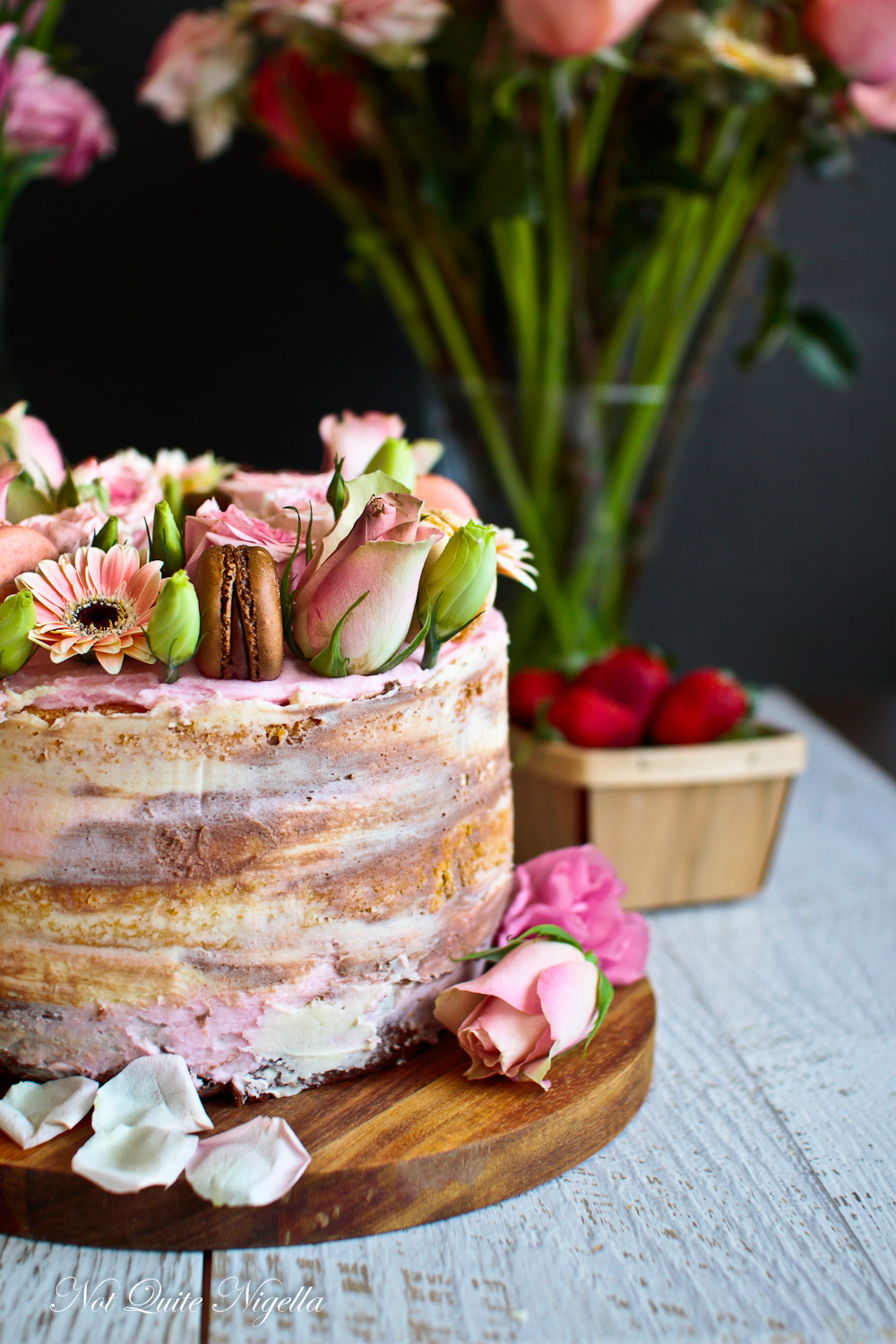 Then we realised that we also have another ritual in common. Every night I go to bed earlier than Mr NQN and watch television on my laptop. He has to come in and put my socks on me. Nina does the same with Garth except he tucks her in. Which got us to talking about other things that we do in common. 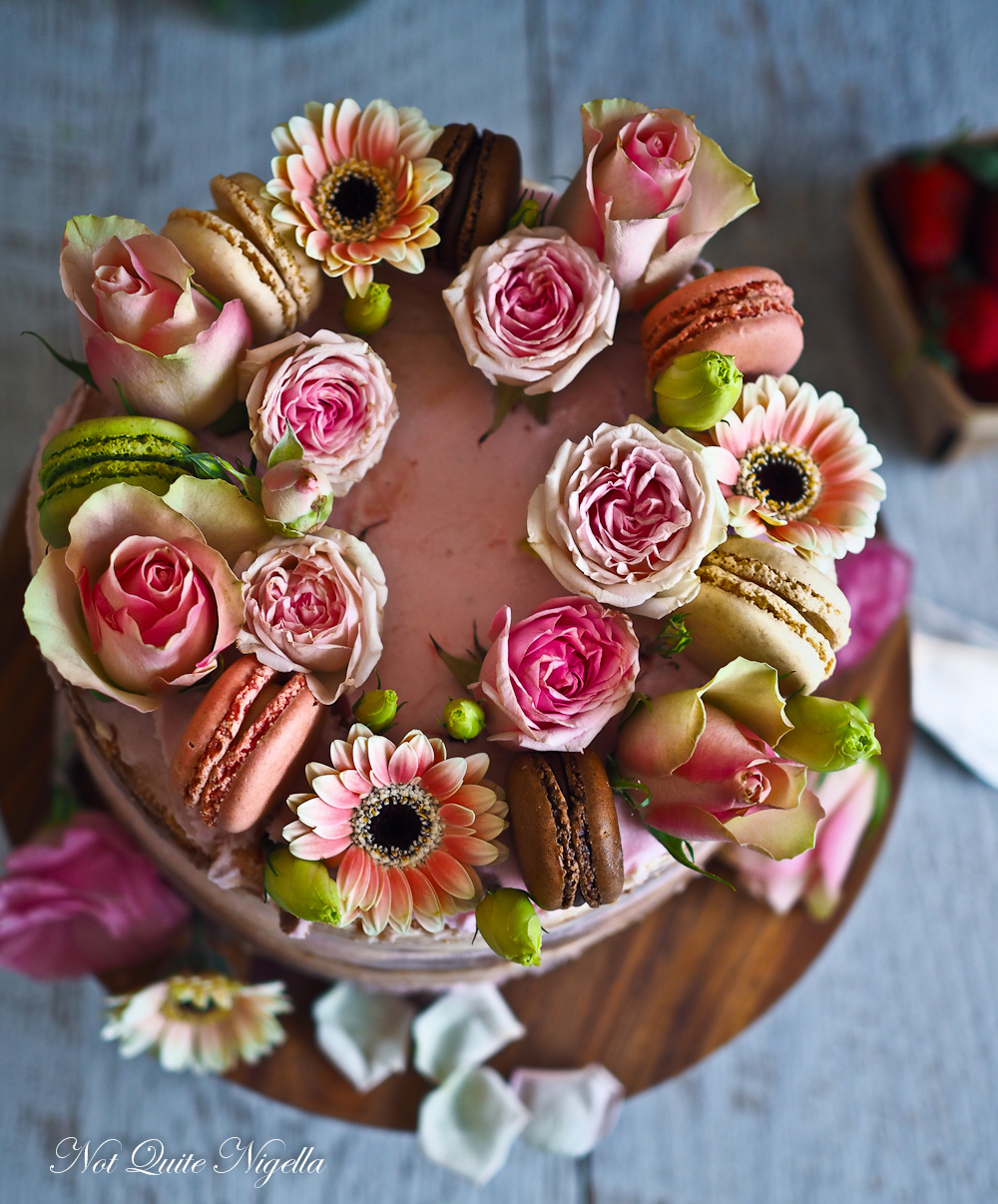 There are crazy accents or voices we put on that he wouldn't dream about doing in front of other people (I always do - I have no shame), the fact that he hides chips from me at my insistence and the endless volley of messages to each other of cute pugs in costume, a bulldog falling asleep and two frogs sheltering from the rain.

Speaking of couples, my dear friend and hairdresser Elly @maxbrennerswife (you remember the gal that I tried to get together with Mr NQN's brother Manu?). Well she has been with Sebastian for two years now and a few months ago I was one of the first to find out that she is pregnant! 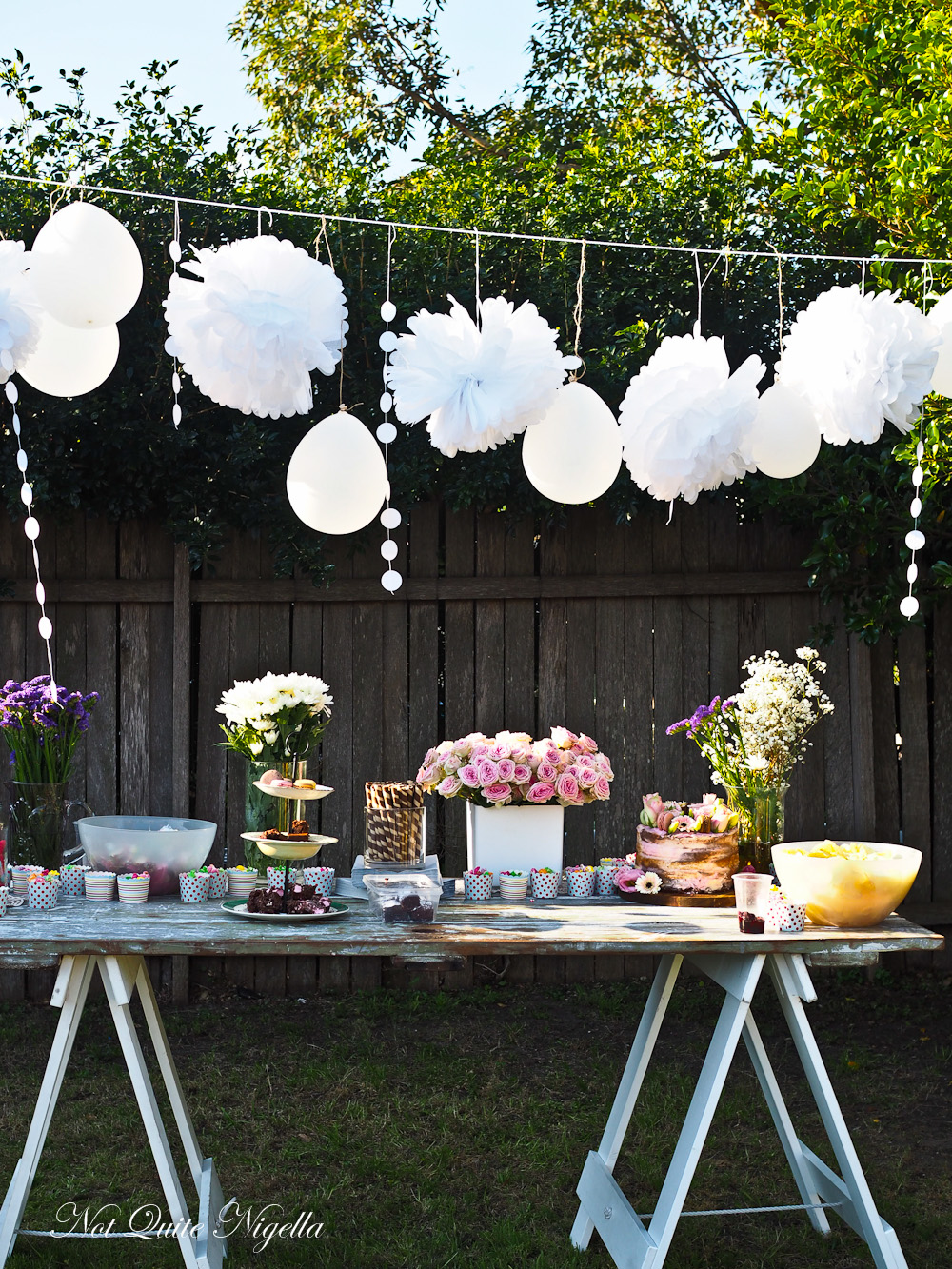 Fast forward to a 7.5 month pregnant Elly and her baby shower. I offered to make her a baby shower cake. I asked her what both of their favourite flavours were so that their cake like their baby would be a combination of the two of them. She said: strawberry, vanilla and chocolate - neapolitan which is one of my favourite colour and flavour combinations. She also said that she liked naked cakes so I noted this and then the idea of a watercolour buttercream came to me in a dream a few nights before the party date. I just had no idea how to do it. 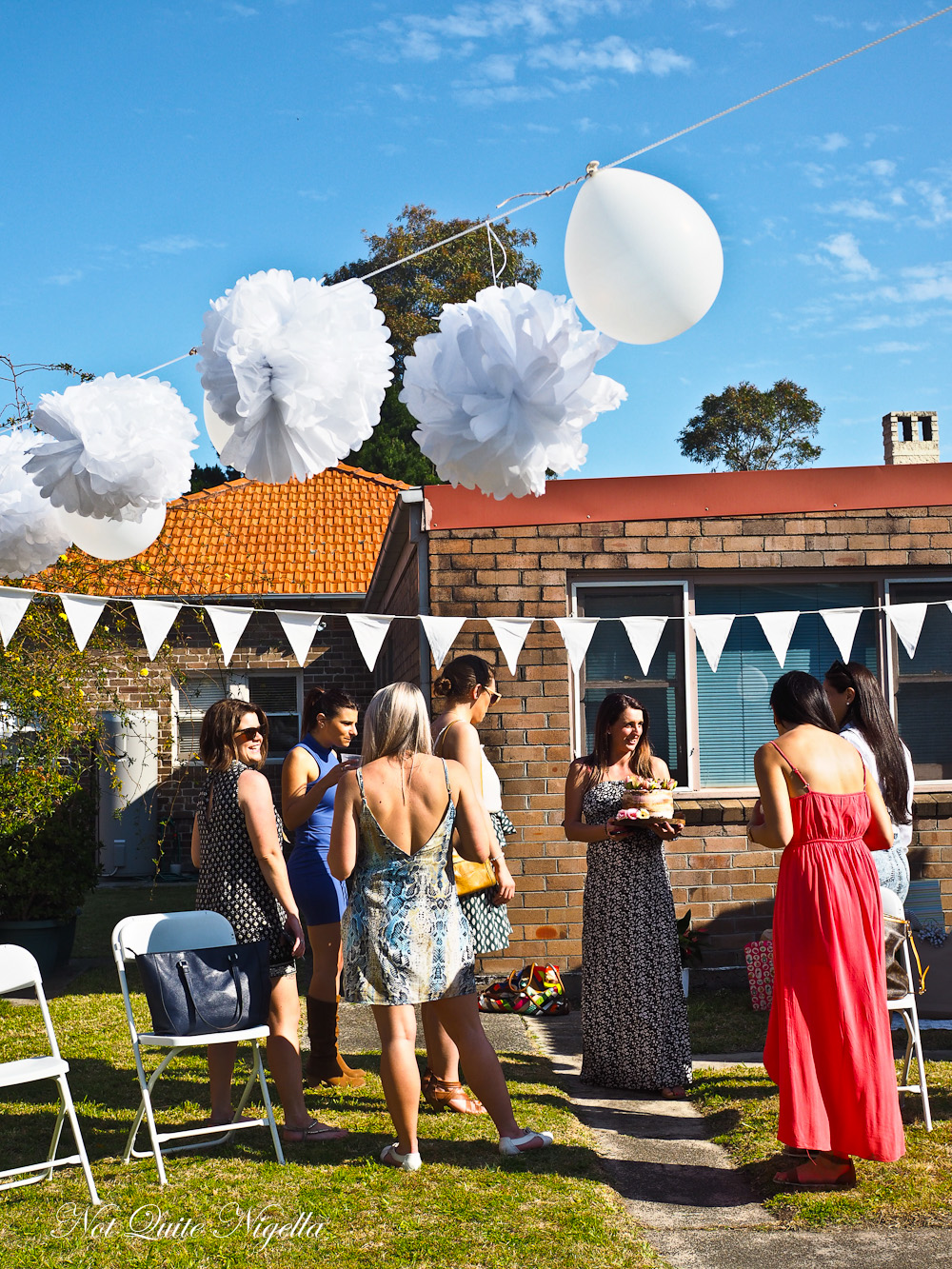 Smarter cake decorators will know that the best time to test out a decorating idea is not on your friend's baby shower cake. In fact if you watch the youtube video there is a bit where I am so frightened at the dodginess of the cake (just before the final flourish when it all thankfully came together) that I almost suggested that Mr NQN turn off the camera and help me bake her a new cake. I kid you not, I was doing double duty piping and counting how long I had til I had to deliver her a freshly baked cake. 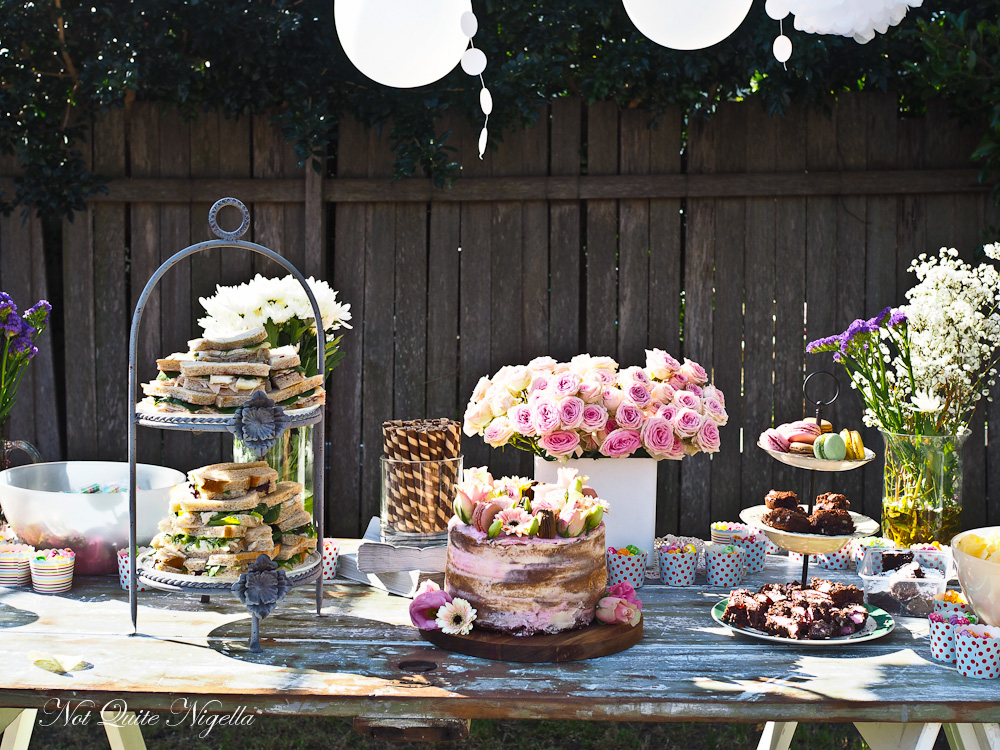 Somehow it worked and I breathed an enormous sigh of relief. The technique is super easy too! To decorate I used macarons and fresh flowers. Find organic flowers and be sure to tape the stems of the flowers to prevent any sap from making its way onto the cake. 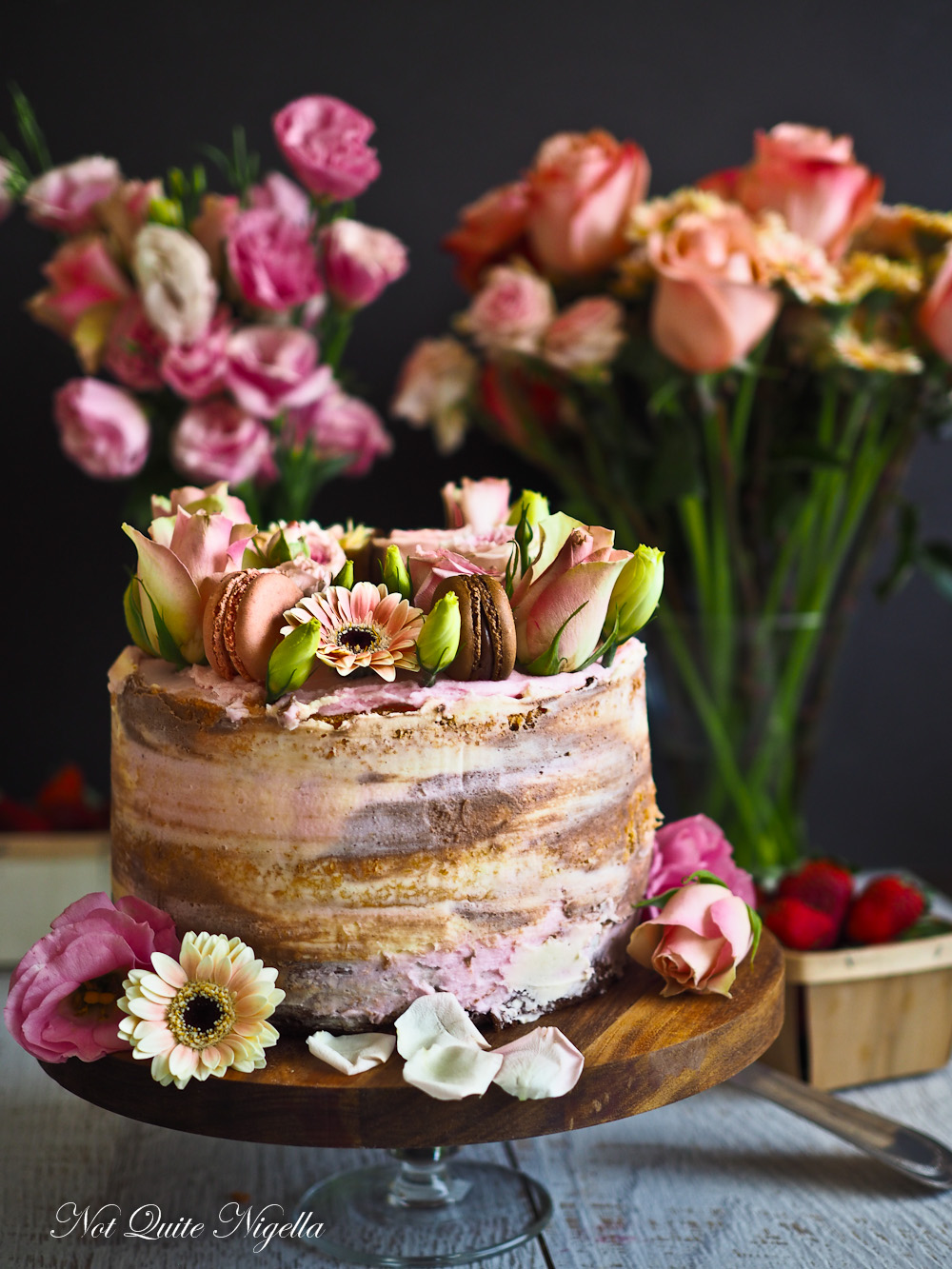 Roses are the easiest to use because they are not poisonous and check to see if the flower that you want to use is poisonous or not (a surprising number shouldn't be used). And yes the interwebs is divided on whether to use fresh flowers or not, some say yes as long as you use a flower pick or tape and others say under no circumstances. Please just make your own mind up :) 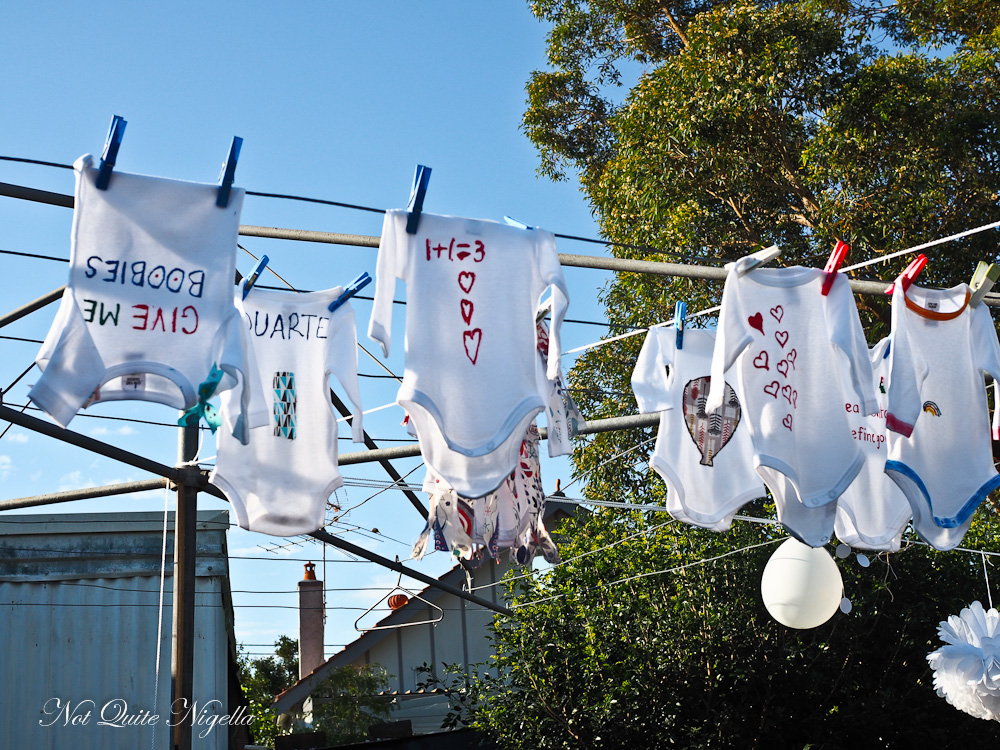 Elly's baby shower was beautifully laid out and there were some fun games. The guests decorated little baby onesies and put baby names in giant baby bottles. The baby is due nearish to Halloween and I resisted the urge to put in baby names like Pugsley, Morticia, Gomez and Wednesday. 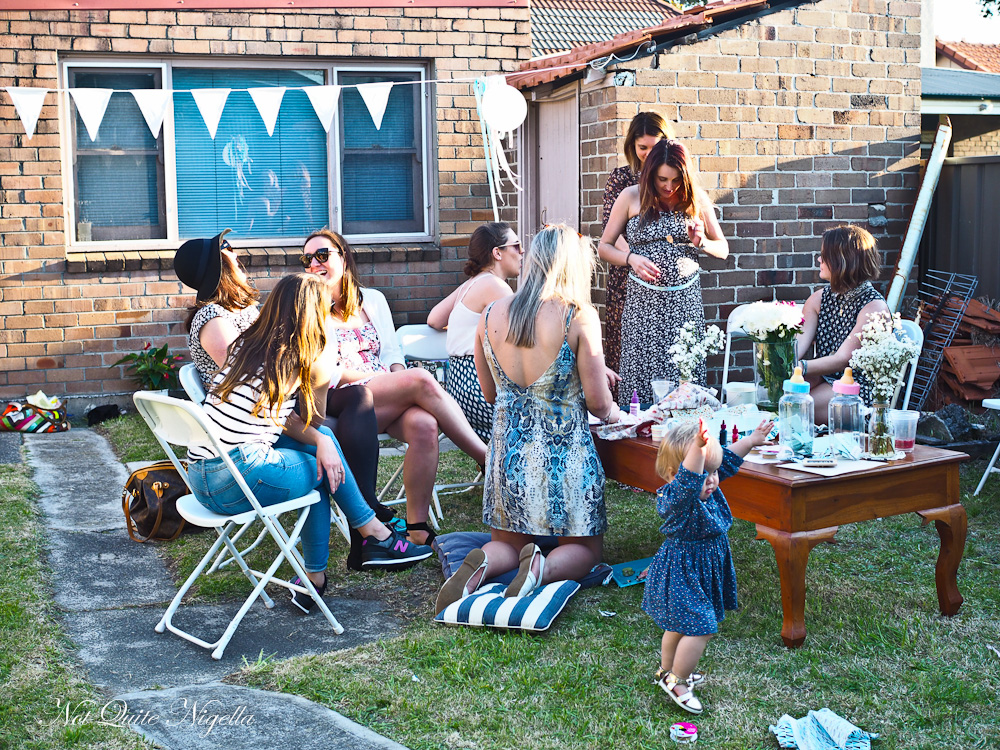 I did manage to embarrass myself with the guess the belly circumference game by over estimating it by about a metre! If I could have melted into the ground like the witch of the west I would have...But thankfully we distracted people with cake and I guess that was my plan all along!

Here's the video too in case you want to watch this all in action! I was excited the way that it came together (not to mention relieved). And yep there are bloopers and if you subscribe you'll get the videos first before anyone else as I usually upload them one or two days ahead of when the recipe goes up here ;)

So tell me Dear Reader, do you have any secret couple behaviours? What would your friends be surprised to learn about you? Do you prefer fresh or sugar flowers? 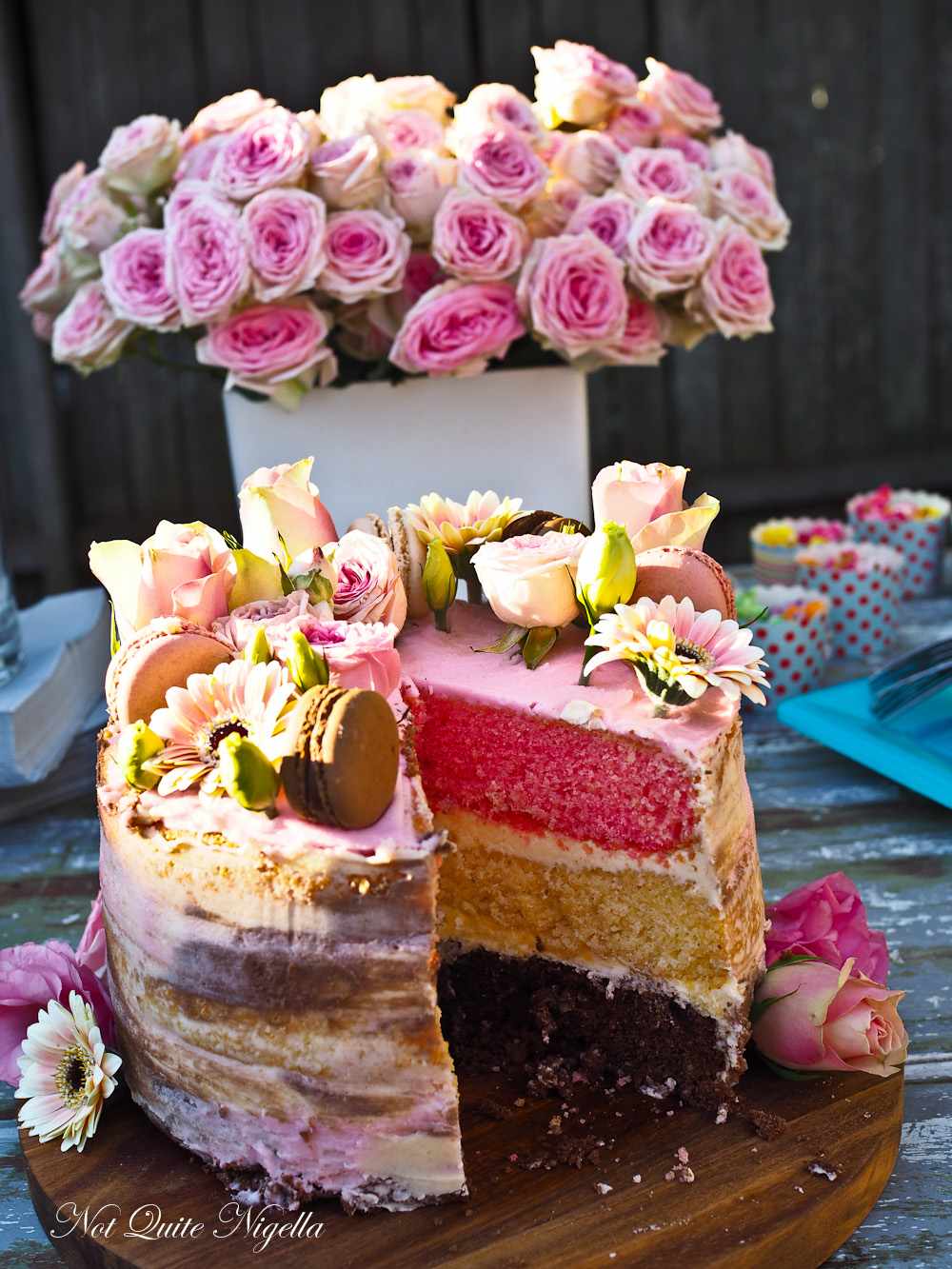 The gorgeous vintage cake stands are by Valentina's Cake Stands

*To make 1 cup of cake flour, place 2 tablespoons fine cornflour/cornstarch in a measuring jug and fill to the 1 cup measure with plain flour.

Step 1 - First measure the weight of your mixer bowl (so that we can divide the batter into three). Preheat oven to 170C/340F and line the base and sides of 3x 30cm/8inch cake tins. Fit your mixer with a beater attachment and beat the butter, sugar and then the eggs until fluffy and mixed well. Add the flour and baking powder in two lots mixing in on the absolute lowest speed alternating with the buttermilk and vanilla.

Step 2 - Weigh your bowl now and subtract the weight of the mixer bowl. Divide by three (mine was about 650g/23ozs. for each colour) and place the plain vanilla in one of the prepared tins and then divide the rest in two using scales. Add a touch of pink rose colour and flavouring to one being careful not to overmix it (you don't want to activate the gluten as this will make the cake tough). Add the cocoa powder into the third and place each in the prepared tins. Bake each cake for 35-40 minutes until a skewer inserted comes out clean. Cool completely and wrap well in cling film.

Step 3 - Make the buttercream. Using the beater attachment, beat the butter and then add the icing sugar, milk and vanilla on very low speed. Increase speed to high and beat for a minute or two until fluffy and thick. Place 2/3 of this vanilla buttercream in two piping bags (it won't fit into one piping bag) with a large plain tip or just snip the ends. Divide the remaining quarter into two with most of the buttercream tinted pink and just 4 tablespoons tinted brown with the cocoa. Tint one of them pink with strawberry flavouring and the other with the cocoa powder. Place these in small piping bags. 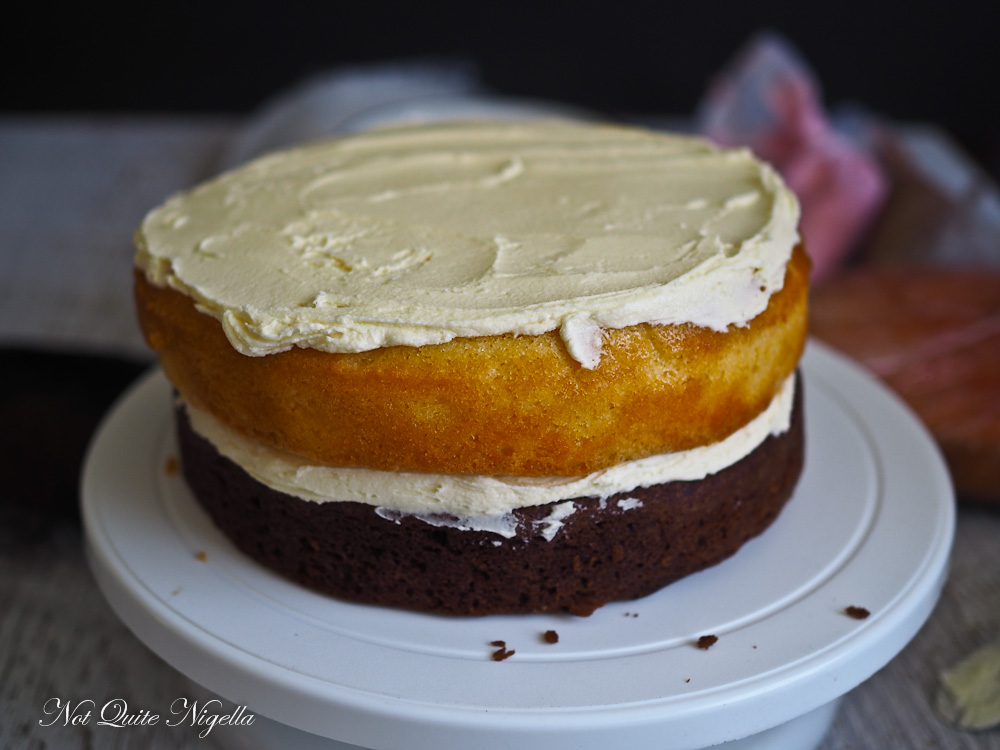 Step 4 - Unwrap the cake layers and place the chocolate layer on a cake carousel. Pipe the vanilla buttercream on top and then spread it out to reach the sides as much as possible. I should have levelled the cake but I didn't want to lose height. Repeat with the vanilla and then then place the strawberry layer on top. Pipe some pink buttercream on top and spread it out to the edges (making sure to reserve some for the sides). 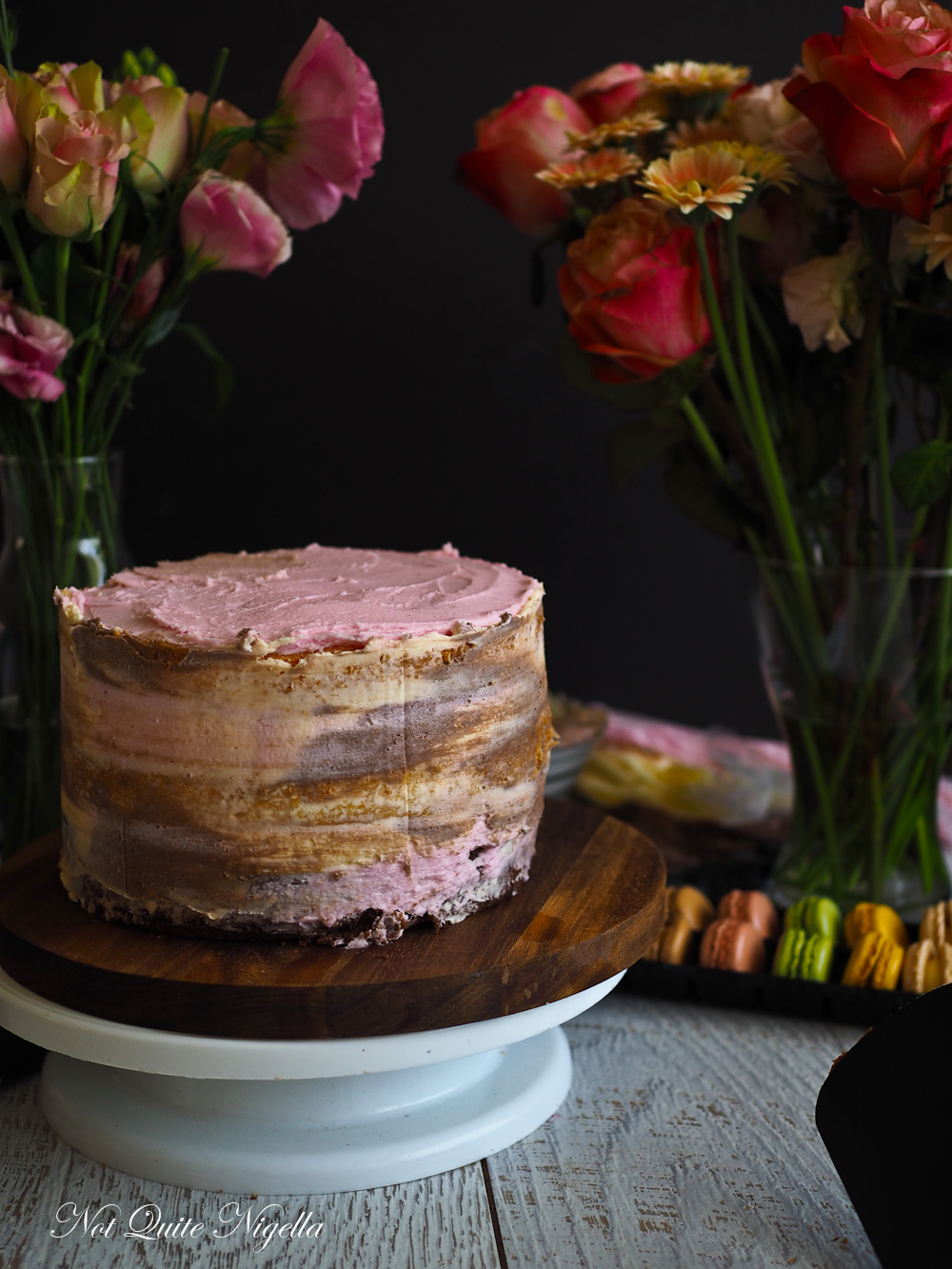 Step 5 - Now comes the watercolour effect. Spread the vanilla buttercream on the sides making sure that it isn't too thick. You want to see some of the cake layers (or you can actually make this thick, it was just that Elly likes naked cakes and I wanted to show some of the layers). Pipe stripes of pink and chocolate and then using the spatula spread it across. This will look a bit like a mess but you want streaks of colour.

Step 6 - Then take the cake scraper on the longest side and place it against the buttercream and turn the carousel. This smooths out the colour and icing and creates the watercolor buttercream effect. 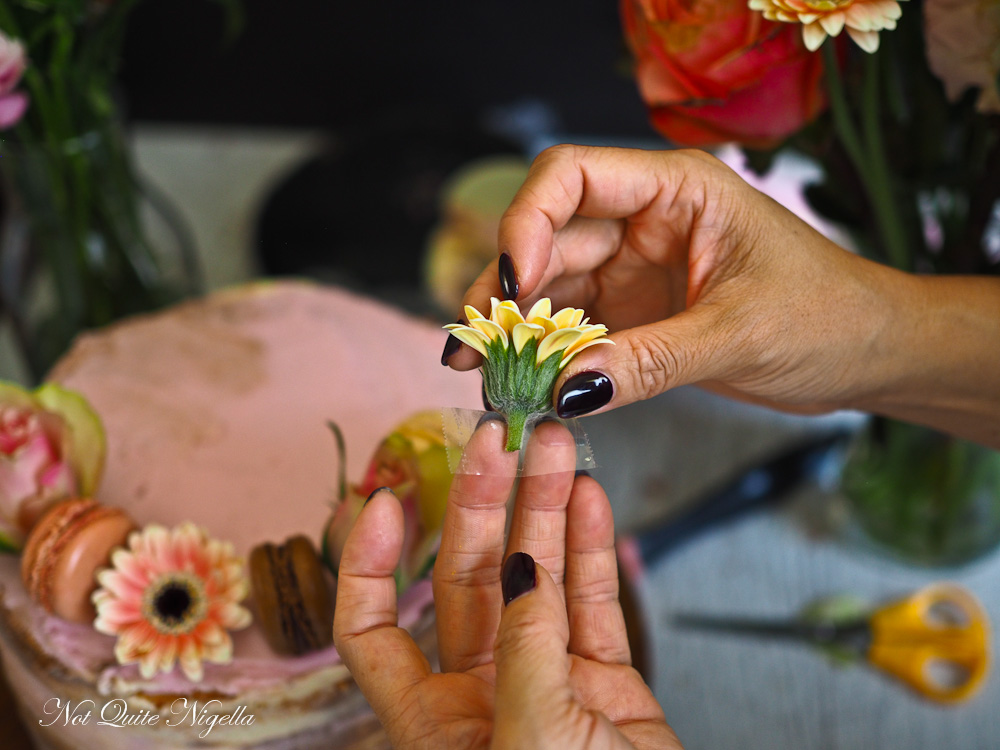 Step 7 - Snip the rosebuds and take the sticky tape and tape up the ends. Do this twice just in case especially if you are not using roses. You can also use a flower pick although these tend to be quite large, find small ones if you can. Place the blossoms alternating with the macarons. This cake can keep at room temperature unless it is a very hot day. 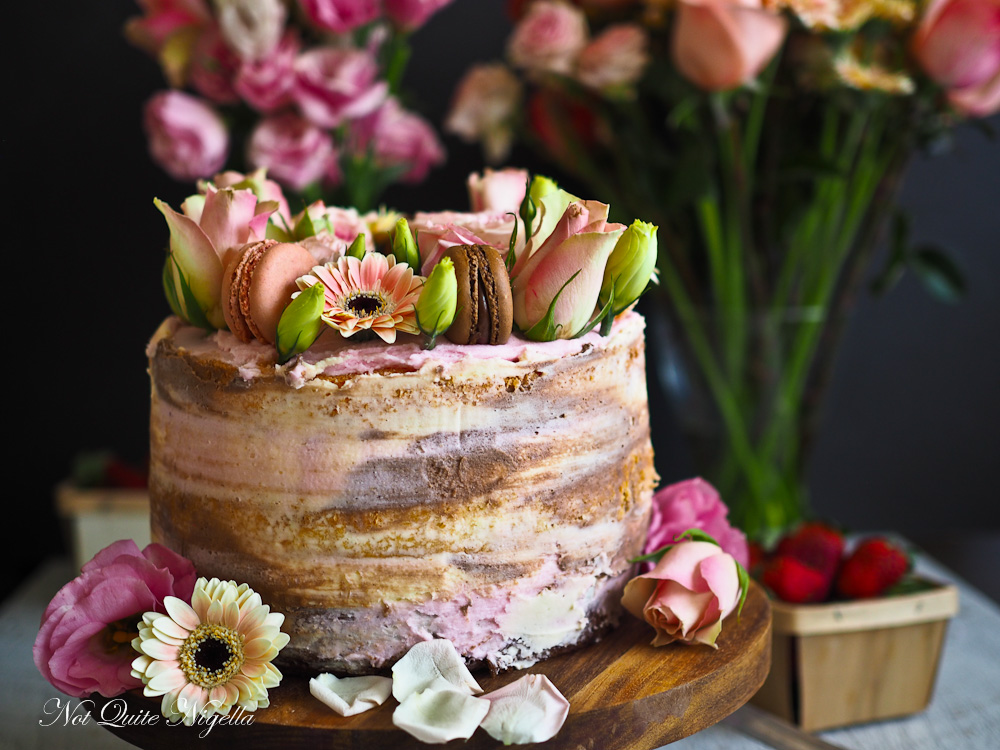