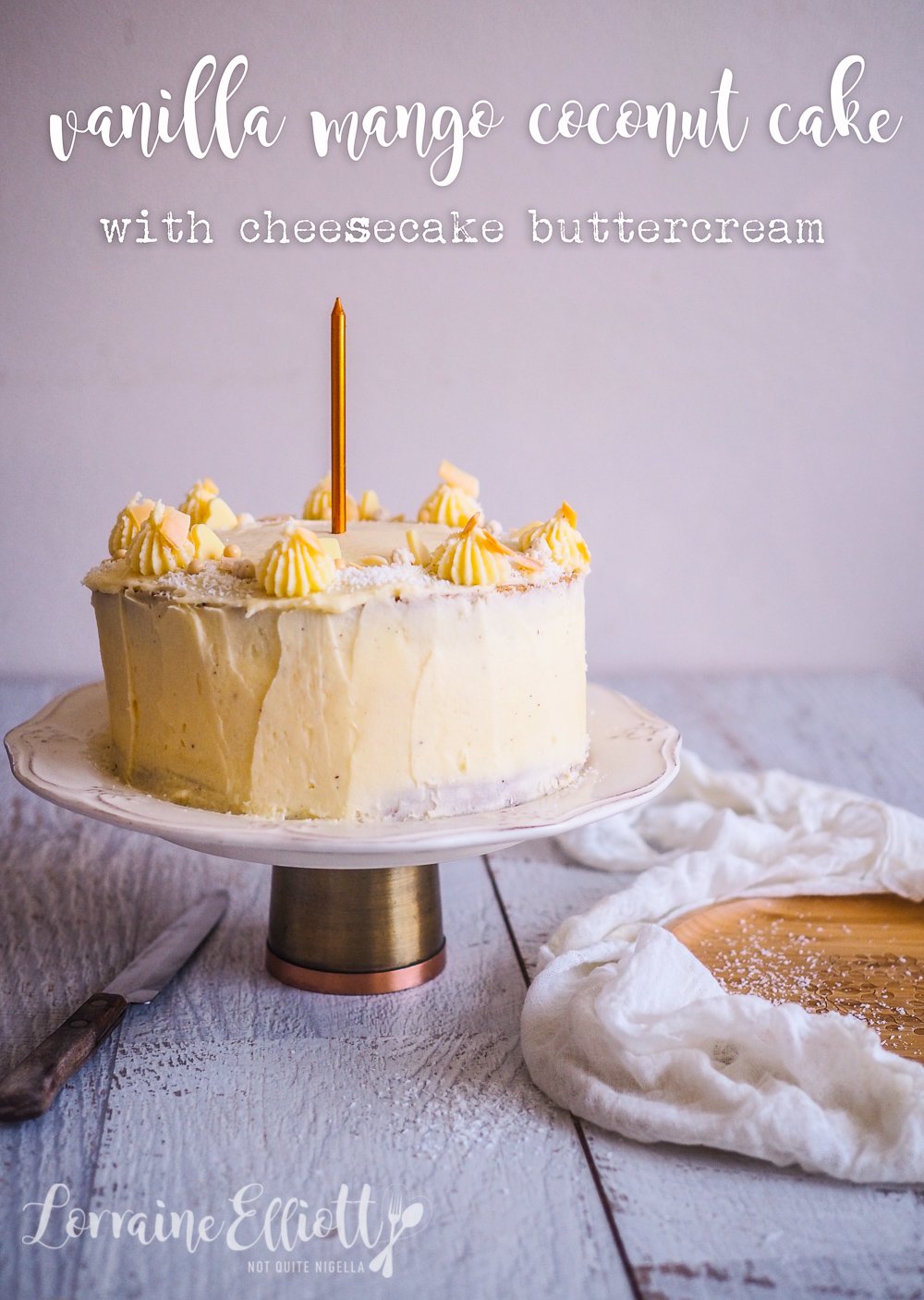 This cake is one of the top 5 cakes I've ever made. It's a production but not impossible and actually a breeze if you make it over a couple of easy days. It has quite a few layers but for a special occasion, Christmas or birthday I highly recommend it. It's a layer of moist vanilla cake layered with a ginger cookie crusted vanilla cheesecake, a layer of mango jelly, a vanilla panna cotta and another layer of vanilla cake. It is then smothered in a silky mango vanilla cheesecake buttercream frosting and coconut! 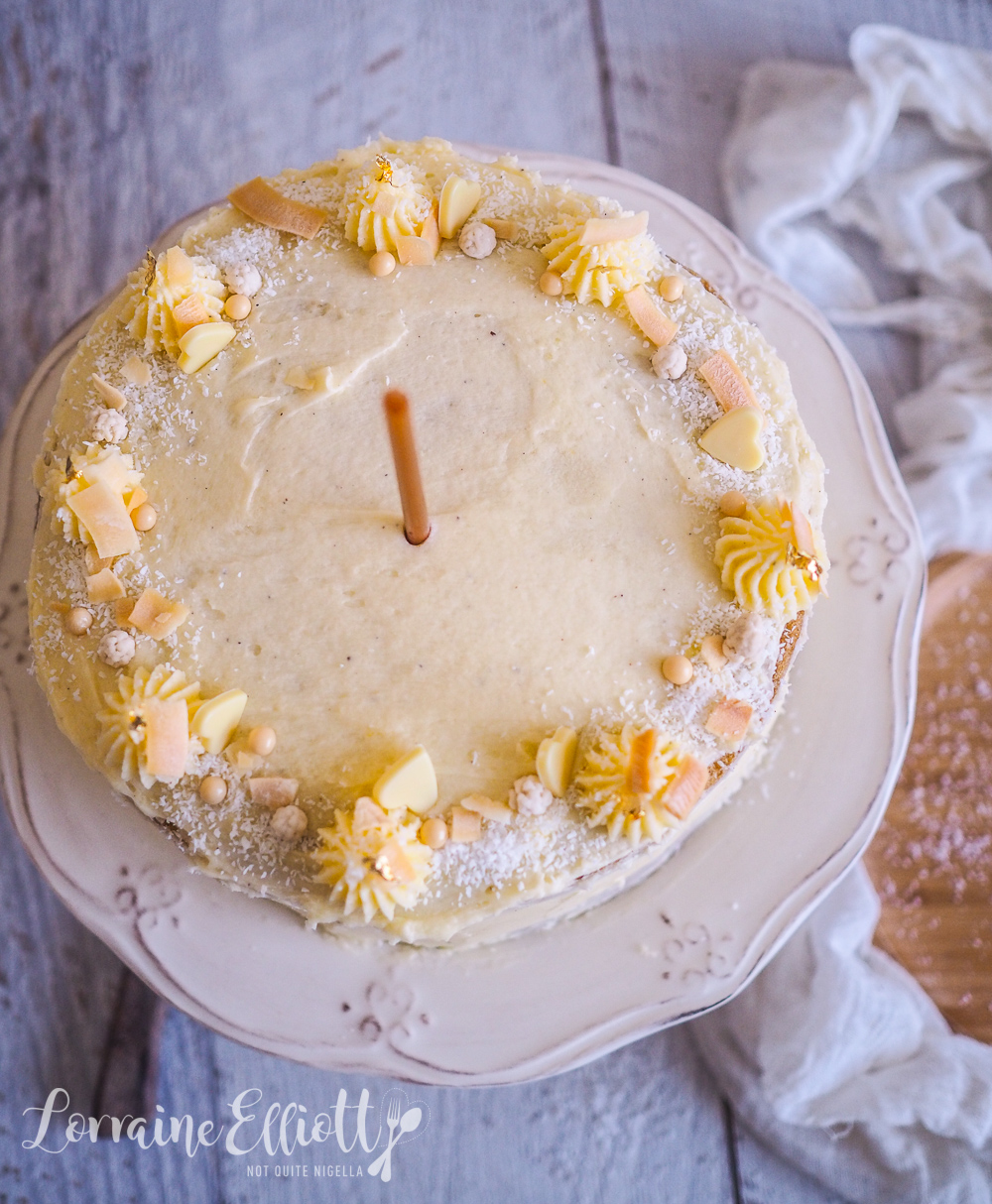 I made this cake for Mr NQN's birthday. He loves fruit and jelly so I ended up layering it with mango jelly and panna cotta and he has a newfound love of cheesecake after tasting the pressure cooker cheesecake that I made. 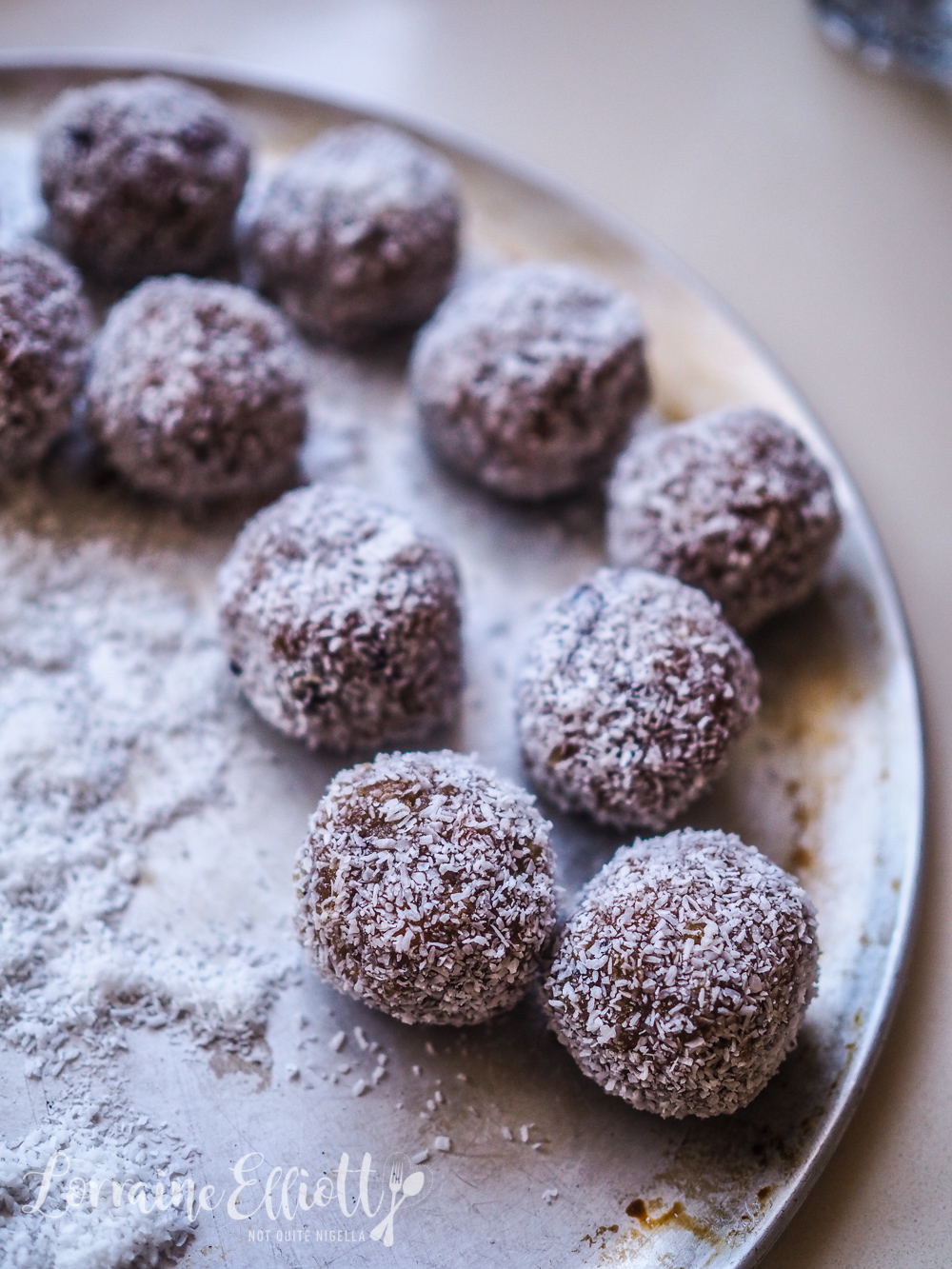 This is basically like baking several little cakes which is why I suggest it's not am every day cake but rather one for Christmas coming up. There's a bit of everything for everyone, plus any offcuts can be shaped into cake balls with a splash of rum and then rolled in coconut or chocolate hail. And then you've got Christmas petit fours! 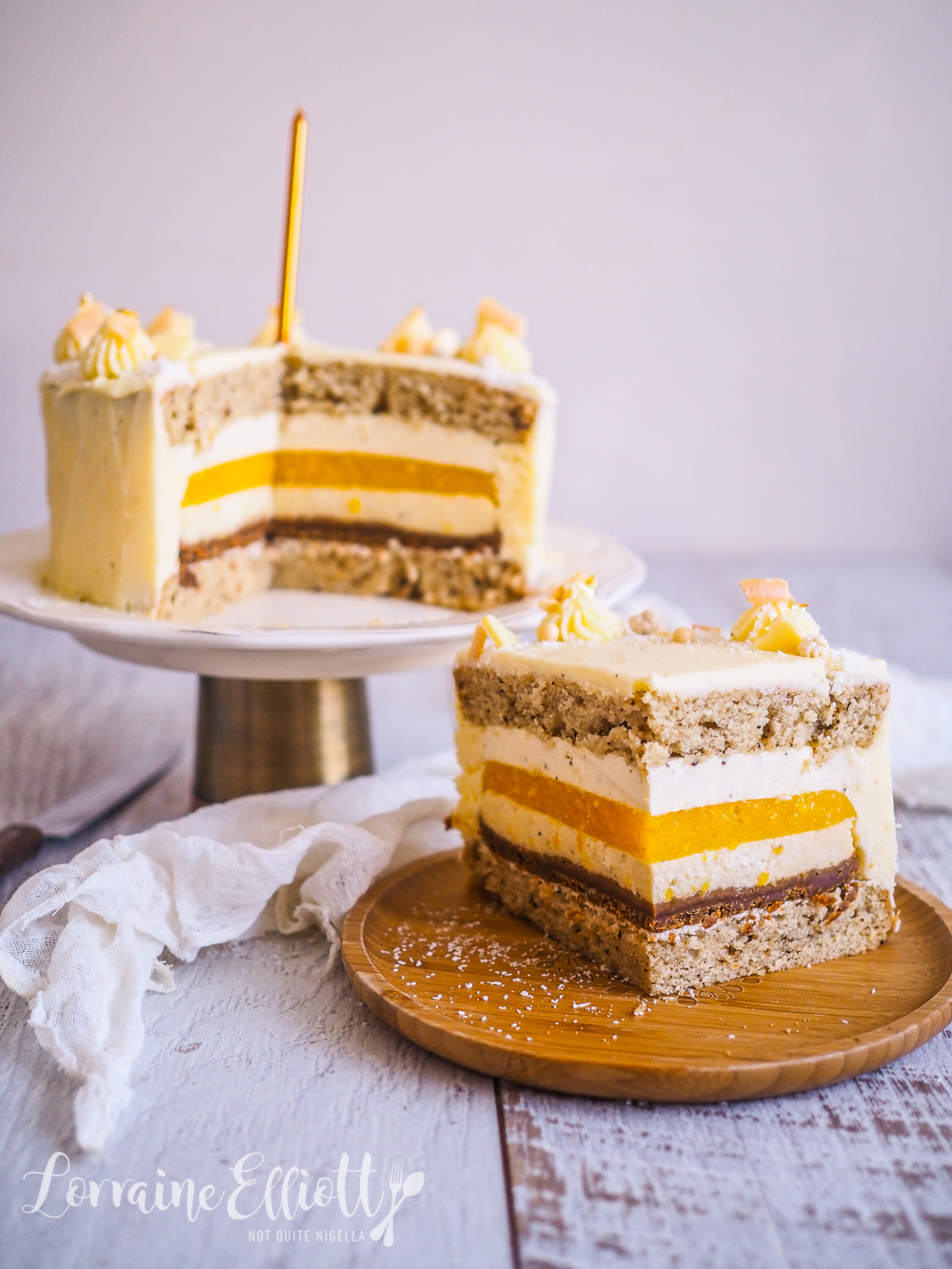 I'm being super pushy here. I'm hoping that you'll make this cake as a showpiece cake and that you'll love it as much as I did. For Australia mangoes are in season but even if you're in the opposite hemisphere, frozen mango works a treat too. Promise me you'll make this. I'm being very pushy ;)

Sometimes, you can't help being a pushy personality. But one time I was on the receiving line of pushy. I have a friend Heidi who is a generally a nice woman. She is single but doesn't really want to be but because she travels a lot it can be hard to meet people. We face a lot of similar work challenges and it's always nice to talk to someone who understands your perspective. But then I realised she had a whole other side of her.

A socially ruthless side. 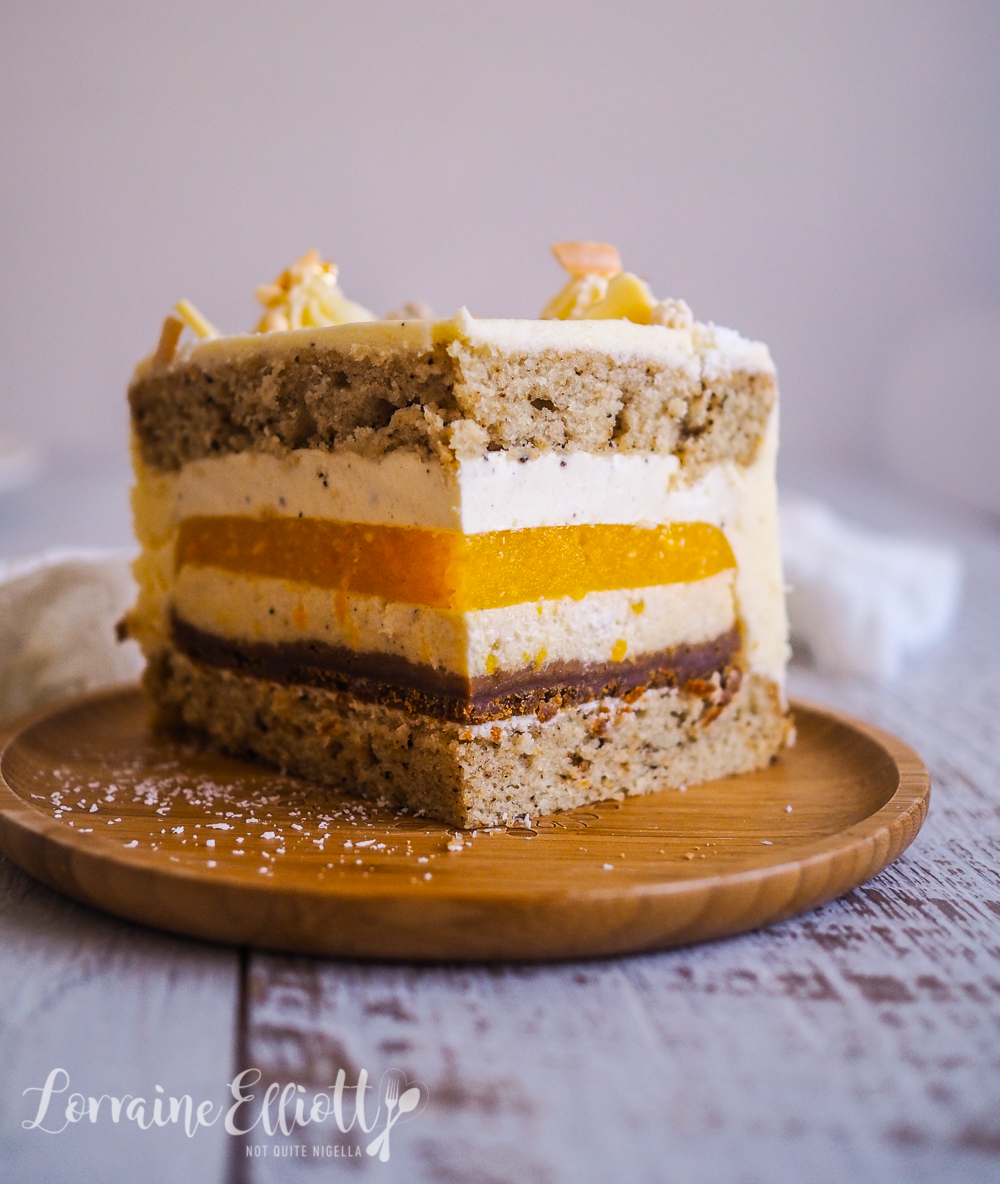 I invited her along as my guest to a media event. It was one where chefs were cooking some dishes as a preview of an upcoming food festival. And this may sound odd but I am not actually friends or know many chefs other than professionally following them on social media or having a nice chat but for the most part apart from one or two, I'm not best buddies. So Heidi and I were sort of chatting on one side to each other.

There were a group of "hot" chefs that work as a small group sometimes and Heidi realised she knew one. "Oh I know him!" she said and left me and walked off towards him while I was mid-sentance. I followed her because we were mid conversation but then she did the strangest thing. 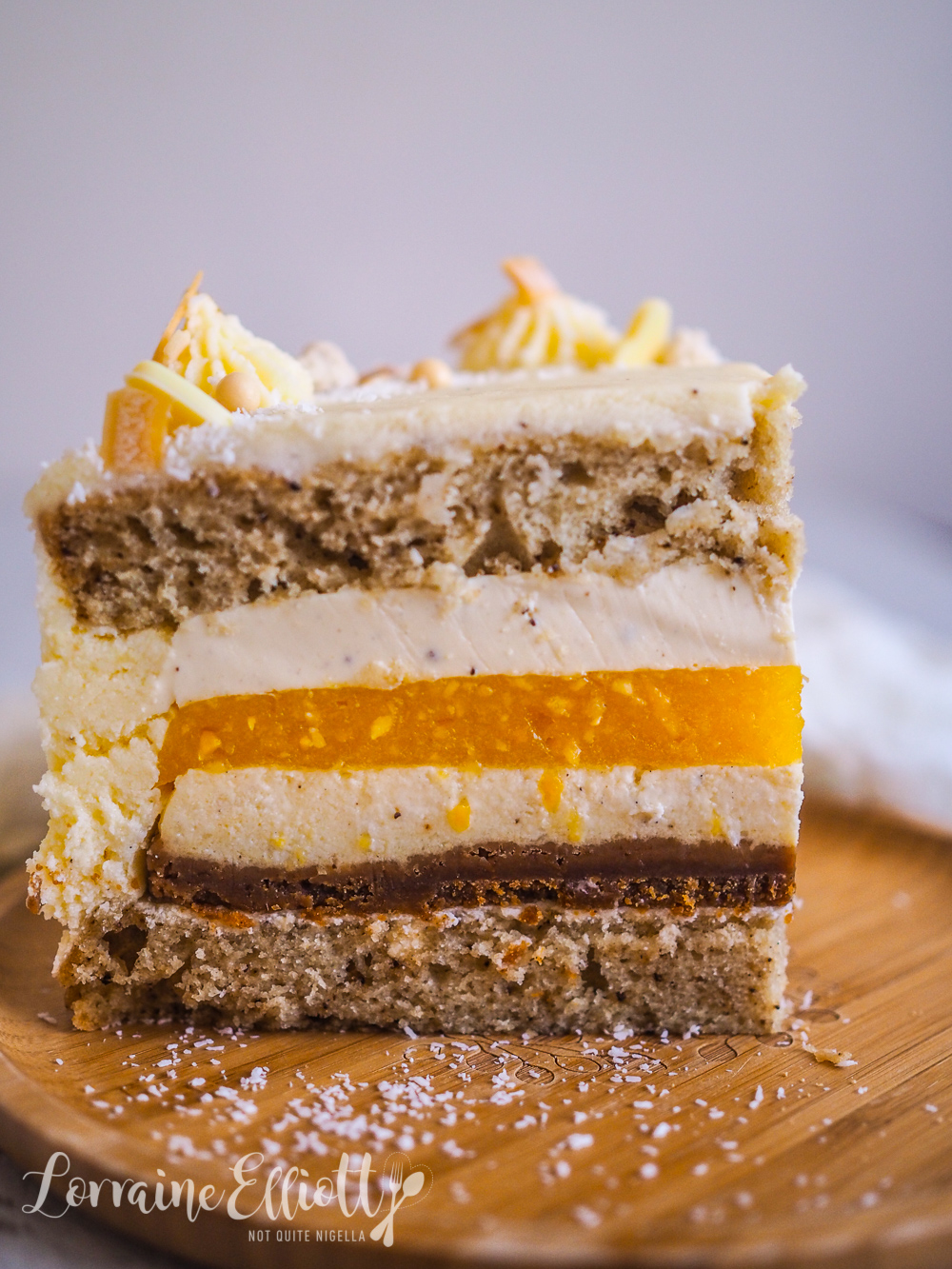 "Hiiii!!! Remember me??" she trilled. She has a very bright and sparkly way of talking when she is talking to men - sort of like when you're enthusiastically cooing at a cat or dog which can be alarming when you're sober or a human being. Then she put her back to me and didn't move to let me in to the conversation group. I stood there to the side while she flirted and simpered.

I realised after a minute of standing there like an interloper that I was pretty much socially dead to her now that she had found herself a man, albeit a very married one, and I had served my purpose. I know life as a single woman is tough out there but I also know that life is too short to invite socially ruthless friends to anything. And that is why I haven't invited her to an event since! ;)

So tell me Dear Reader, do you know any socially ruthless people? Are multi layer cakes your sort of thing? 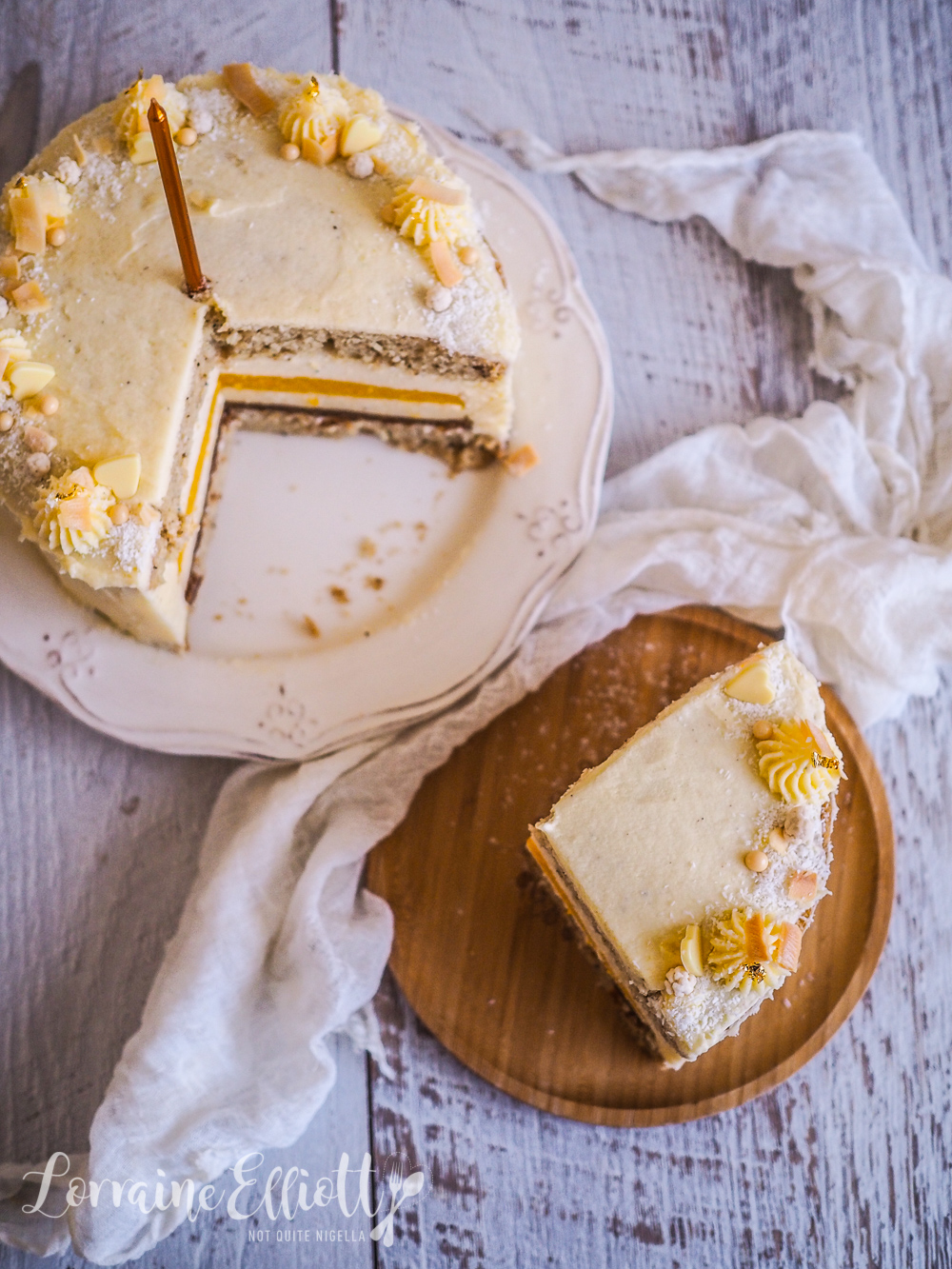 Cheesecake: First make the cheesecake as this is best made the day before. Actually you can make all of the layers a day ahead of time and just assemble and ice it on the day if you like. Line a 17cm/7inch springform pan on the base and sides. Process the cookies until they become a fine sandy texture. Mix with the melted butter and press into the base of the tin. Freeze for 10 minutes.

Beat the cream cheese, sugar, vanilla and salt until smooth. Then add the egg and flour and pulse until just combined. Pour into the tin. It is a very thin cheesecake (about half the normal height). I cooked this in a pressure cooker because that's Mr NQN's favourite cheesecake but you can also bake it in the oven.

To cook in a pressure cooker add 1 inch of water. Place a trivet inside the pressure cooker and cook on high for 25 minutes making sure to release pressure naturally (don't press down on the button). To bake in an oven, bake at 140C/284F for 45 minutes or until almost set. Cool, cover and refrigerate.

Vanilla cake: Preheat oven to 180C/350F and line 2x20cm/8inch round tins with parchment on the base and sides. In a bowl whisk the dry ingredients (flour, sugar,, bicarb and salt). In a jug measure the water, oil, vinegar and flavourings and whisk to combine. Make a well in the dry ingredients and slowly mix in the wet ones and mix until just combined and lump free (do not overmix). Divide into both tins and bake for 25 minutes. Cool completely.

Mango Jelly: Get started on the other layers while it is baking and cooling. Make mango jelly. Place 1/4 of the water in a bowl and sprinkle gelatine powder over. Heat in the microwave for 30 seconds or until liquid. Then blend the remaining water with the mango puree and sugar and then add in the gelatine and pulse for a few seconds. Spray a small 17cm/7inch round tin with oil and pour the jelly mixture into the prepared tin and allow to set. It should take around 30-45 minutes to set completely.

Panna Cotta: Place water in a bowl and sprinkle gelatine powder over. Heat in the microwave for 30 seconds or until liquid. Heat cream, coconut cream, sugar and vanilla in a saucepan until simmering. Add the gelatine mixture and stir well. Spray a small 17cm/7inch round tin with oil and pour the panna cotta mixture into the prepared tin and allow to set. It should take around 30-45 minutes to set completely.

Cheesecake Buttercream: Once you have all the layers ready make the buttercream. Beat the butter and cream cheese together until silky smooth. Then add the icing sugar, vanilla and mango flavour in at the lowest speed and then increase to a medium high speed and beat until smooth. 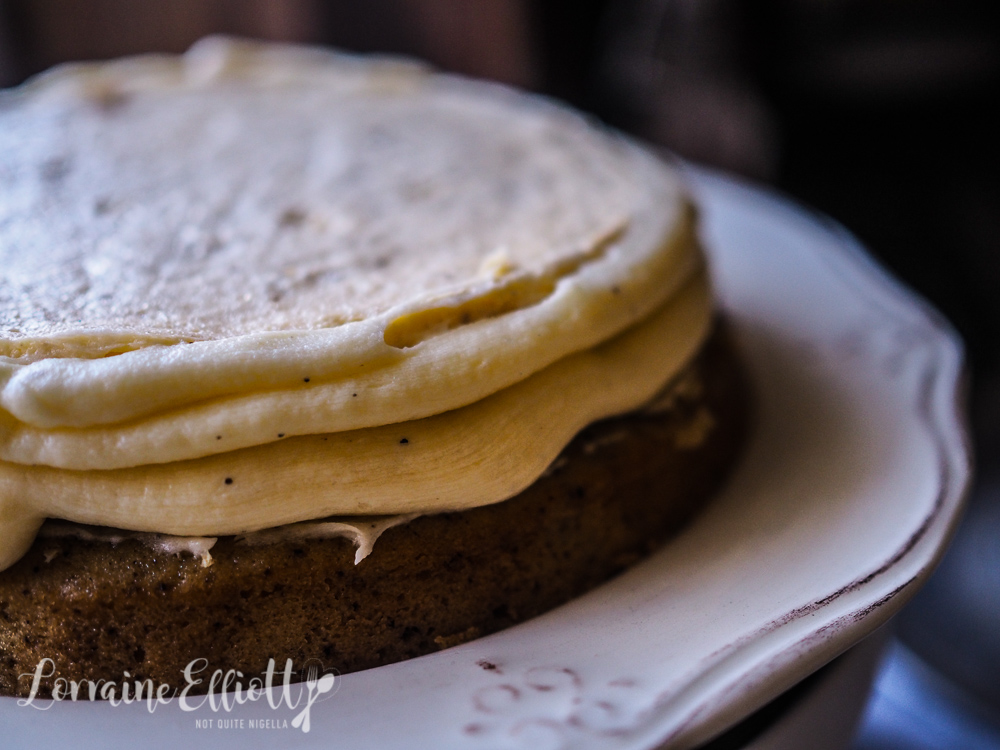 Place one vanilla cake layer on a serving plate and trim the top of it if you need to (I made cake balls with the cut offs). Cover lightly with buttercream. Then add the cheesecake layer. Place buttercream in a large piping bag and pipe around the outside of the cheesecake. 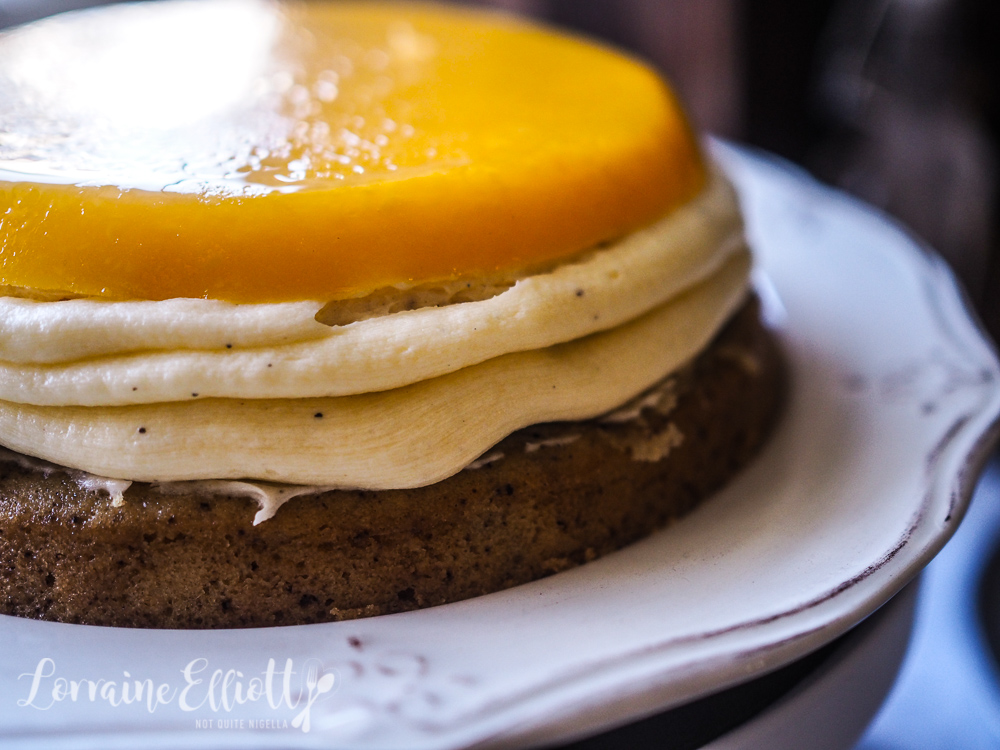 Then add the mango layer on top and then the panna cotta layer making sure to pipe buttercream around the outside of both layers. Top with vanilla cake layer and spread buttercream on the top and sides. Use a cake scraper to smooth the sides completely. 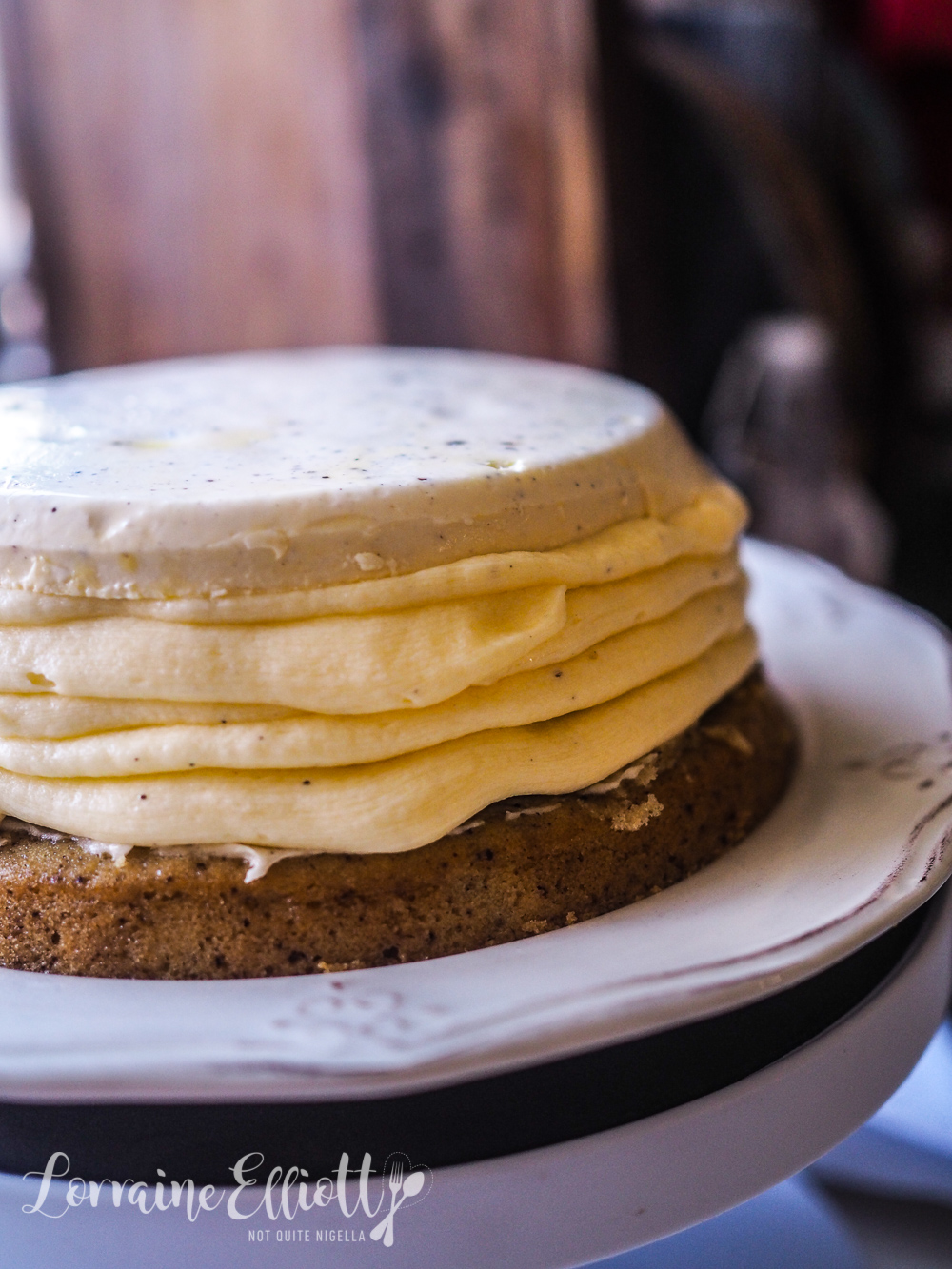 Fit a small piping bag with a 1A tip and fill with 2/3 cup of buttercream and pipe rosettes on top. Sprinkle with coconut and gold leaf. 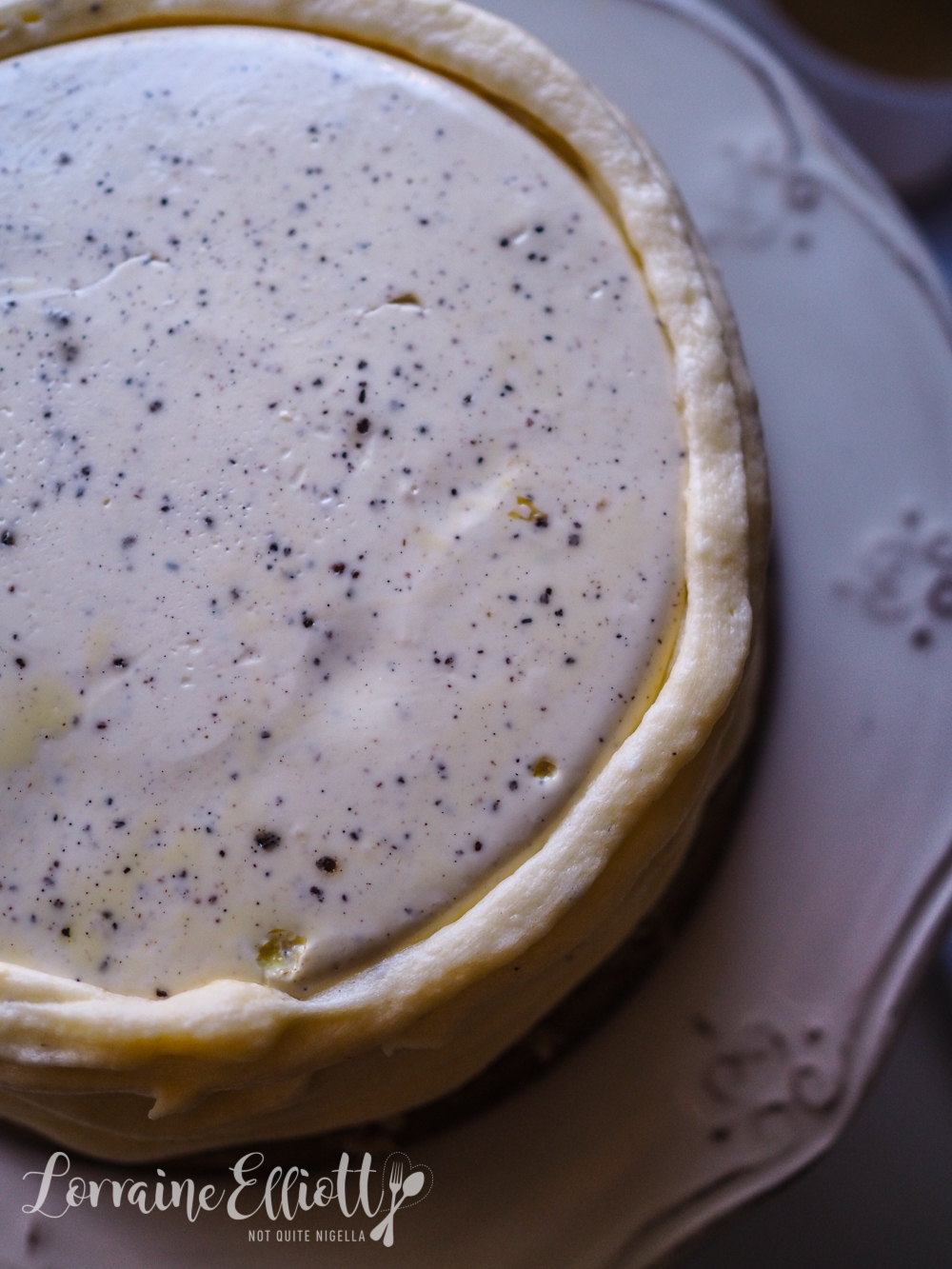 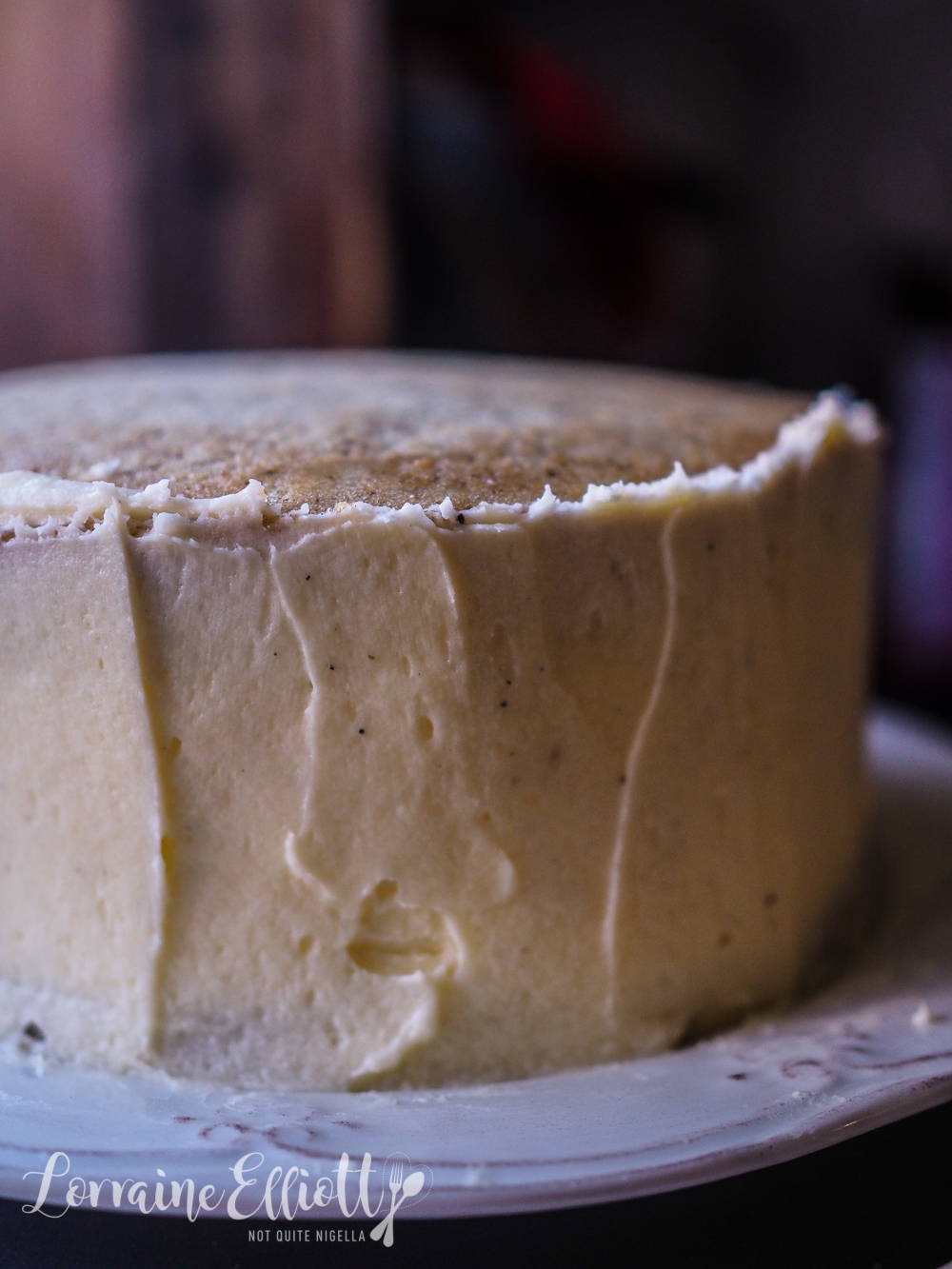