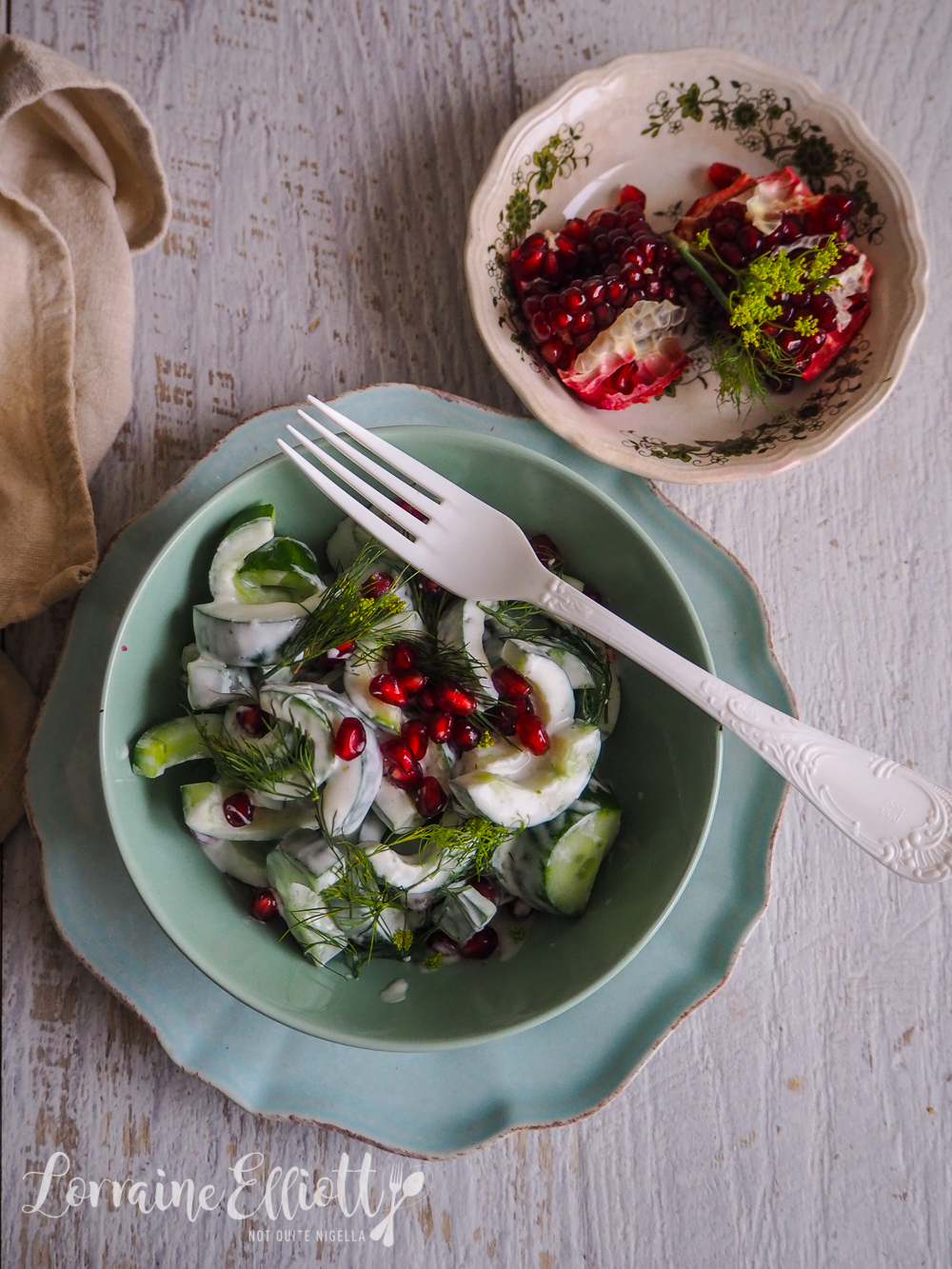 A 5 minute salad to accompany a meat or seafood dish? Or just a standalone tasty lunch? This cucumber, feta and pomegranate salad will be made before you know it!

Dear Reader, a confession: this salad was made entirely of random things I had in my kitchen after Christmas. The dill was from salmon I had bought, pomegranates for decoration and cucumber from Peking Duck. As for the feta it had been lurking in the back of my fridge for months now. But then it turned into such a tasty salad that I knew that I had to share it with you.

Speaking of things in my kitchen, the series hosted by Sherry, this month's IMK for me is an ode to 711s in Asia, specifically Thailand.

7/11's in Australia are boring in comparison to the ones in Asia. The food there is fun, tasty and inexpensive (for visitors) and you can often find a tasty, quick dinner there which I can't really say for ones in Australia unless you fancy a sausage roll or donut for dinner.

Usually when I buy a random snack haul it is met with varying levels of success because sometimes I can't read the ingredients and I tend to pick up odd things. But this haul bought from one 7/11 in Phuket was fantastic. 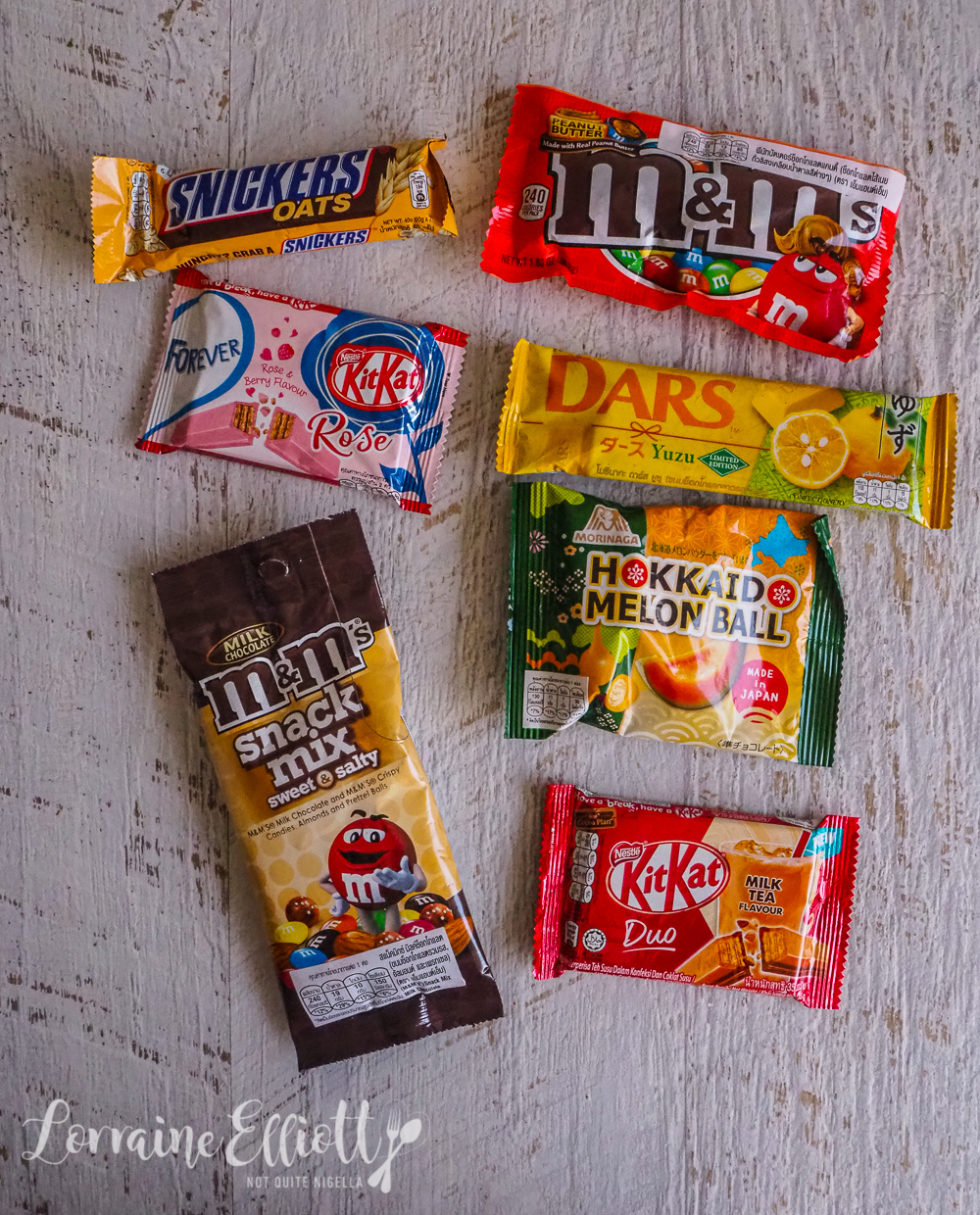 The problem is usually the chocolate in Thailand isn't really to my taste. It can be a bit waxy because it needs to withstand the heat so I don't tend to buy much (I actually bring my own). If I forget, I usually buy m&m's because they are imported and I have a massive addiction to peanut m&m's. But in Thailand I bought two kinds: peanut butter m&ms and a sweet and salty snack mix with milk chocolate and crispy m&ms, pretzel balls and almonds. I really liked the crunchy add ons with the peanut butter m&m's.

Luckily the chocolates that I bought weren't at all waxy. My travel companion Sophia bought about a dozen Kit Kats and I wish I had done the same. The Thai milk tea Kit Kat tastes just like the drink and the Rose Kit Kat is perfect in its floralness. They are pretty much like Japanese Kit Kats except at a fraction of the price. The Yuzu chocolate was also delicious with the tang of yuzu. The melon chocolate balls were also delicious with the aroma of fresh rockmelon. 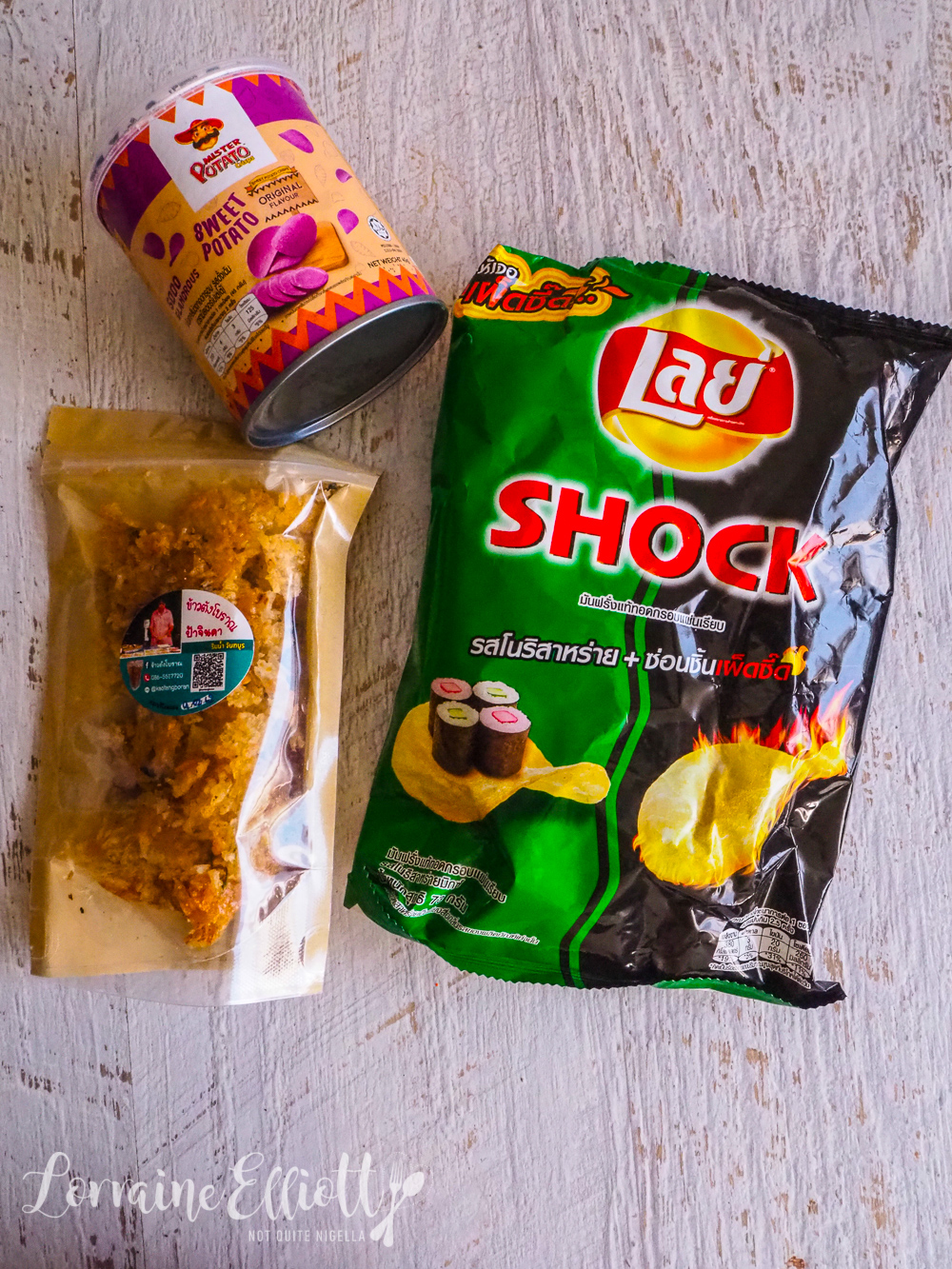 My favourite item in this picture is the crispy rice snack (this wasn't bought from the 7/11). When I was growing up my mother would make fried rice every Saturday morning and I would get the crunchy bits stuck to the bottom of the pan because they were so delicious. In Chanthaburi I found a place that only makes the crispy layer in the wok. They smooth out a thin layer of rice and then fry it and make an addictively good snack flavoured with chilli and kaffir lime leaves. The purple potato Pringle style chips were also good. In fact the only thing that took me by surprise were the sushi chips. These mix bags are always good because you get two flavours of chip in one packet. However as I can't read Thai I didn't notice that the second flavour was wasabi (and I'm not a fan). 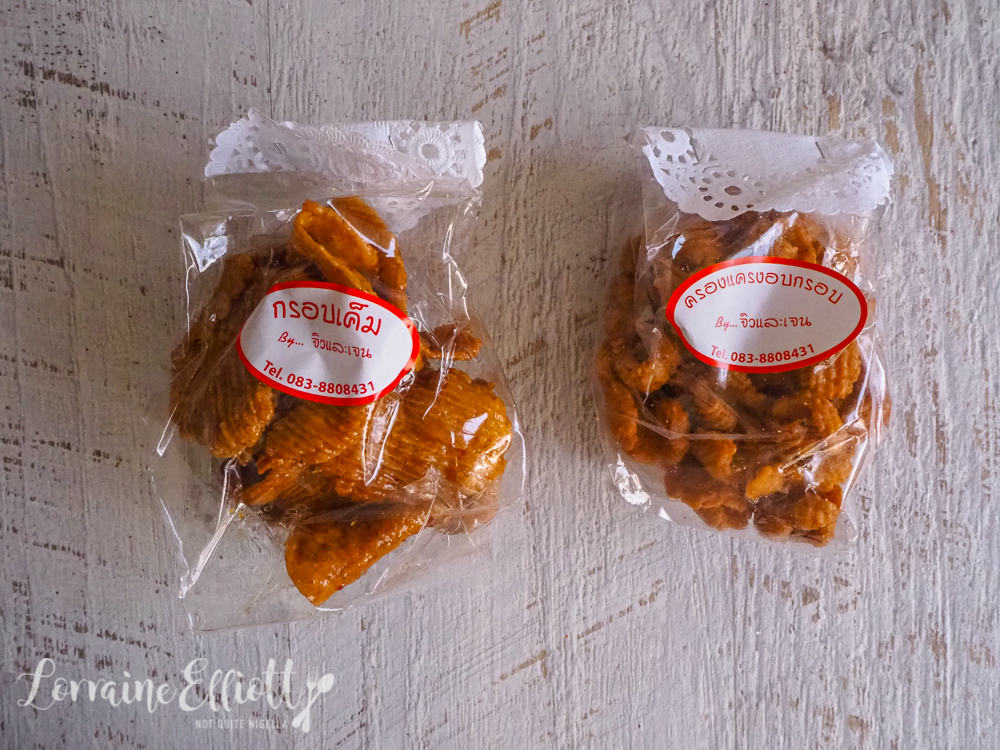 The last few things were items I bought from the Icon Siam and are some of my favourite snacks. There is a black pepper fried cookie coated in syrup that is so addictively good. And on the right are the fried ones without syrup. I gave both away as gifts because they are so addictive!

So tell me Dear Reader, are you also a fan of 711's or convenience stores in Asia? Have you bought anything interesting lately?

Step 1 - Cut cucumbers in half lengthways and scrape out and discard the seeds. Chop into small half moons and place in a bowl. In a small bowl mix the yogurt and pickle water with the garlic and toss the cucumber in this dressing. Then add pomegranate seeds, feta and dill. Season with salt and pepper.