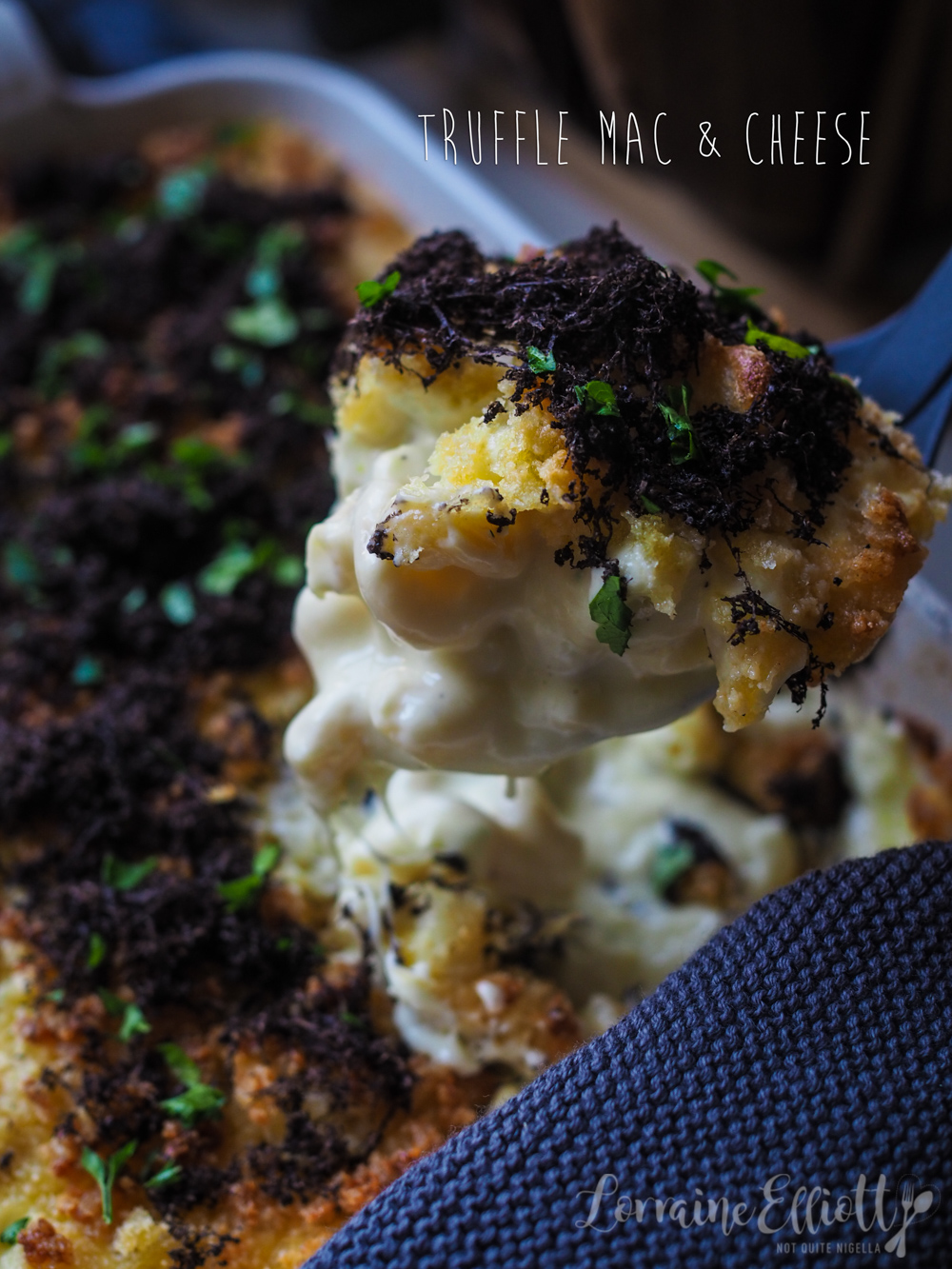 This macaroni and cheese is not your ordinary mac and cheese. This truffle mac and cheese is a restaurant style dish that will have you scraping each morsel from your plate and then asking for seconds. It starts with a leek bechamel enriched with truffle cheddar and mozzarella cheeses and then it is baked under a crispy, crunchy buttery crumb topping before getting its final flourish-a shaving of fresh black truffle! This is a pushy recipe for truffle lovers or lovers of luxe mac and cheese!

This is one of the richest dishes I have made on the blog and I feel like we need it at the moment. It is often hard to get something smelling like a lot of truffle, even if you use an excellent truffle. Most restaurants use truffle oil which is a synthetic product and truthfully it has gotten better over the last 5-7 years or so. A lot of them used to smell like petroleum but I have found the best way to bring the real truffle flavour is by doubling up by using both fresh truffle and truffle cheese. This makes it an absolute killer combination. I used some of the truffle that I received from Australian Truffle Traders who farm truffles in Manjimup in Western Australia. Their aroma is so strong and one silver lining out of this whole diabolical situation is fast access to fresh truffles-these took two days to arrive from WA to Sydney! 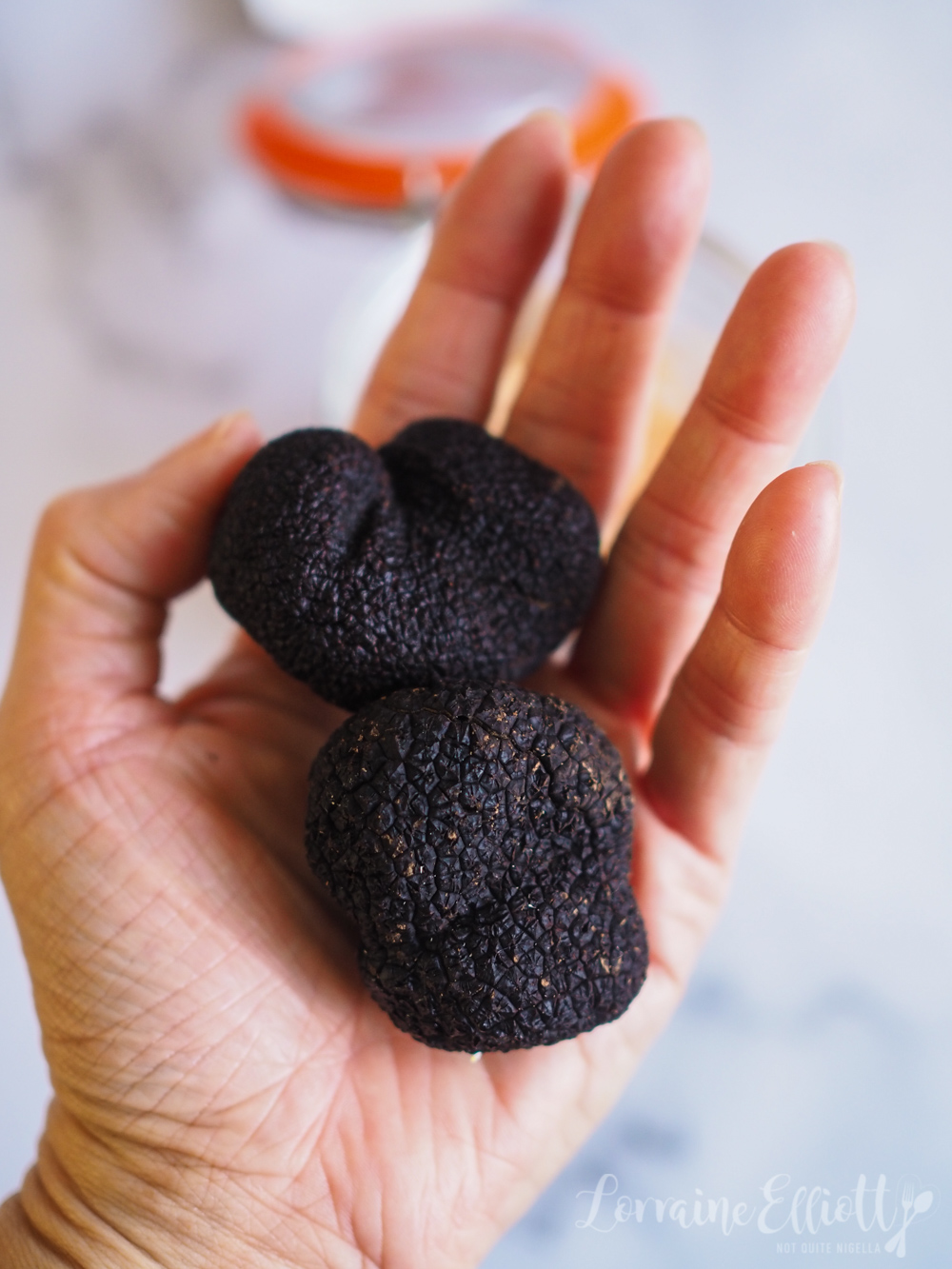 Tips for making an amazing bougie Macaroni and Cheese:

I made this using the remainder of the black truffle that I bought. It felt like a treat getting two big dishes out of the one truffle and by using the truffle cheese which is much better priced than fresh truffle but adds so much aroma, it was beautifully aromatic.

Tips for working with Fresh Truffle 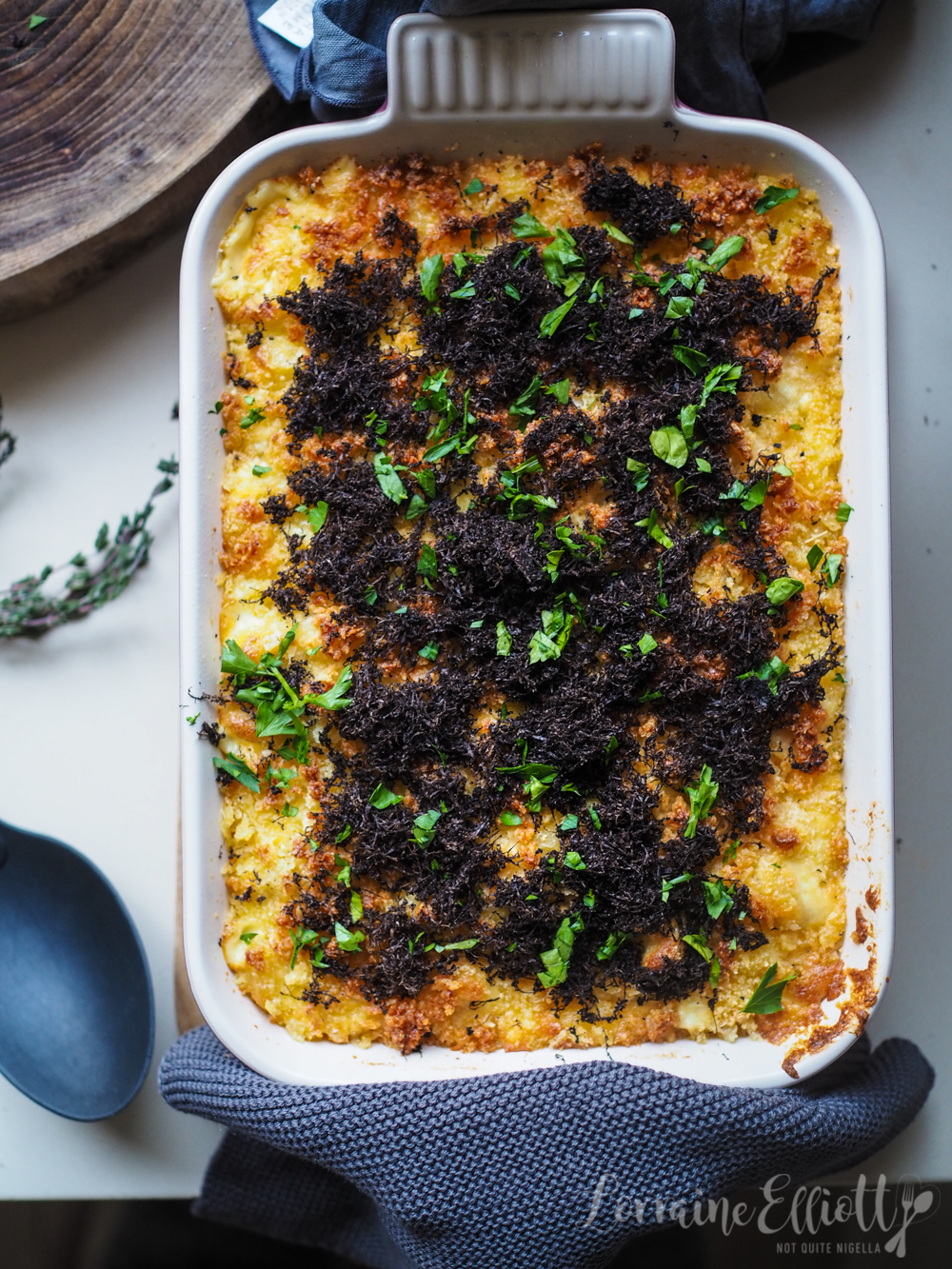 I portioned this mac and cheese out. Mr NQN ate most of this with gusto while I gave some to Laura. I have mentioned how she does the grocery shopping for us and I trade her cooked meals. It's nice to have that connection with friends and look after each other. I also mentioned how we did a surprise swap a few weeks back which was a fun idea and one that we will do again. We had a set budget in which we would choose a meal for the other person. We settled on $125 and I knew where I was going to buy it. It was a restaurant in Surry Hills that Laura, Mr NQN and I had dined at late last year. I just had to check one thing as Laura is very allergic to capsicum. Chilli is fine but capsicum is not.

They confirmed that there was none. However on the day I got a phone call. The chef had decided to put capsicum in every dish of the meal! From the chicken to the salad it had turned into a capsicum tasting dinner. After a small kerfuffle they agreed to make her a meal without capsicum.

That evening Laura and her mother facetimed Mr NQN and I. We had a chat while their chicken was roasting and then we went away to eat our respective meals. Then later I got a message from her with a picture. It was a small handful of green capsicum that they had found in the salad! Laura had reacted straight away and thankfully had the medication on hand. I contacted the restaurant and sent them the picture. They denied that it was capsicum and said that it was green chilli although all I could think was who would add fine strips of green chilli to a salad. Chilli is usually sliced into rounds and there was also that telltale pesky anaphylactic reaction. But it was deny, deny, deny. We weren't even asking for anything, we just wanted to let them know. 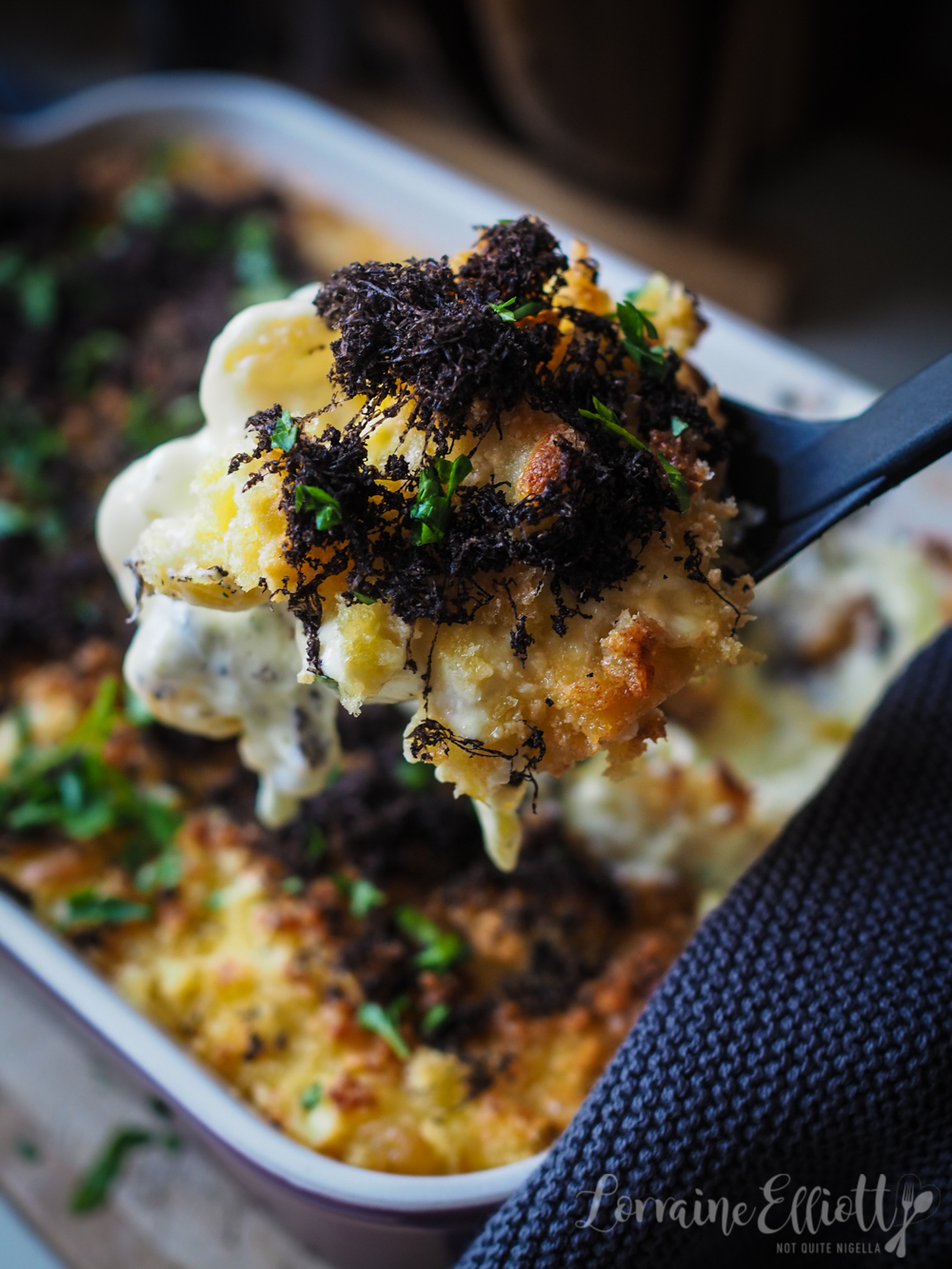 And then I also remembered back to an incident at the same restaurant where we went last year. There were harissa potatoes on the menu. Harissa is laden with capsicum so we asked the waiter to check on that. Laura had assumed that the harissa potatoes were out for her because the main ingredient is capsicum. He told us that there was no capsicum in the harissa which struck me as odd but it was a modern Australian restaurant and they might be doing something different with it.

When it arrived, she smelled the capsicum straight away - it was positively perfumed with the stuff. She called him over and asked him about the capsicum. His eyes widened and he swept the bowl of potatoes away. He returned a few minutes later. "Yes so there is capsicum," he said. I should have remembered that incident before ordering as I almost killed my friend!

So tell me Dear Reader, have you or your loved ones got any allergies that have proved vexing for restaurants? What is your favourite food splurge? 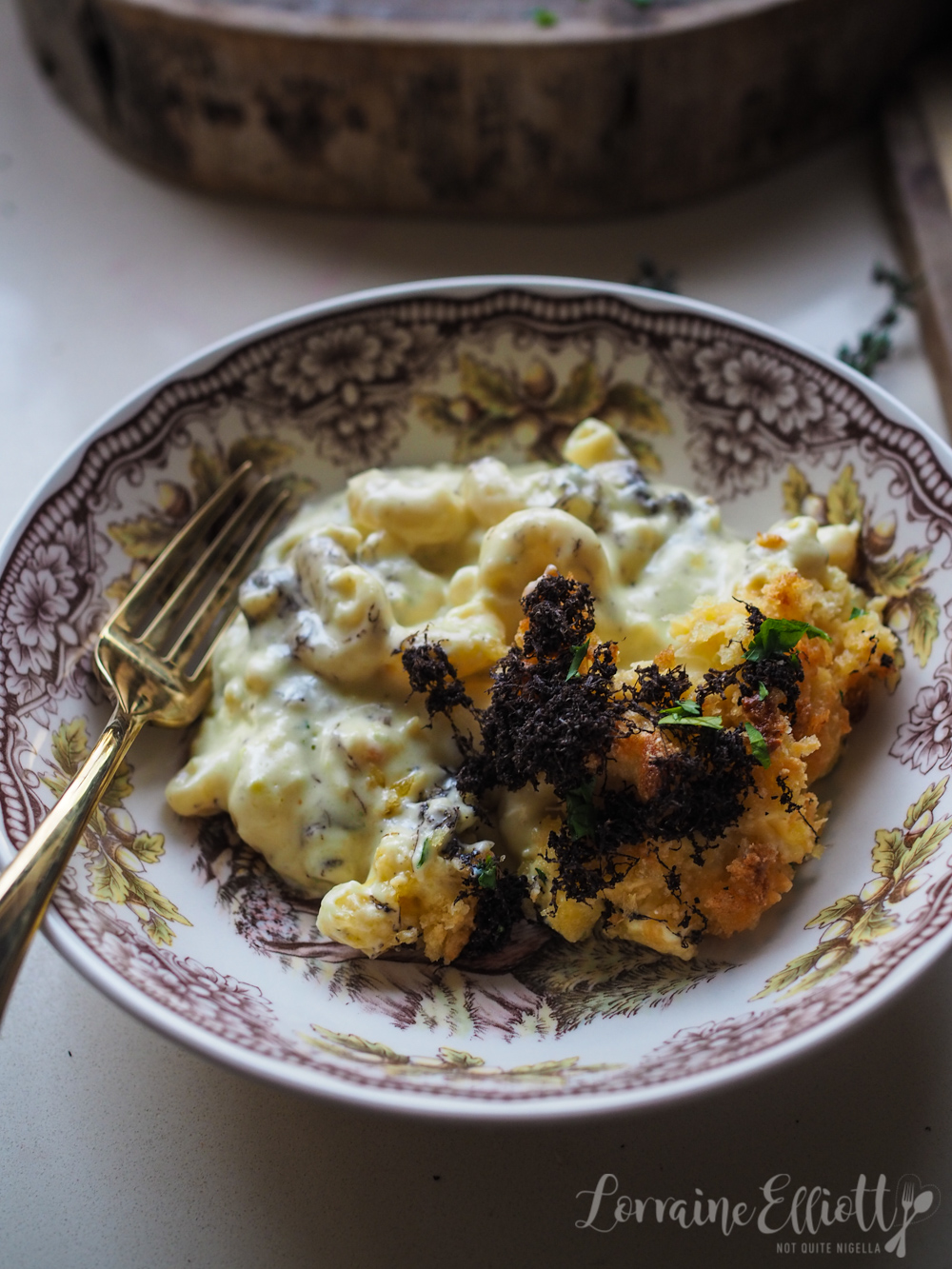 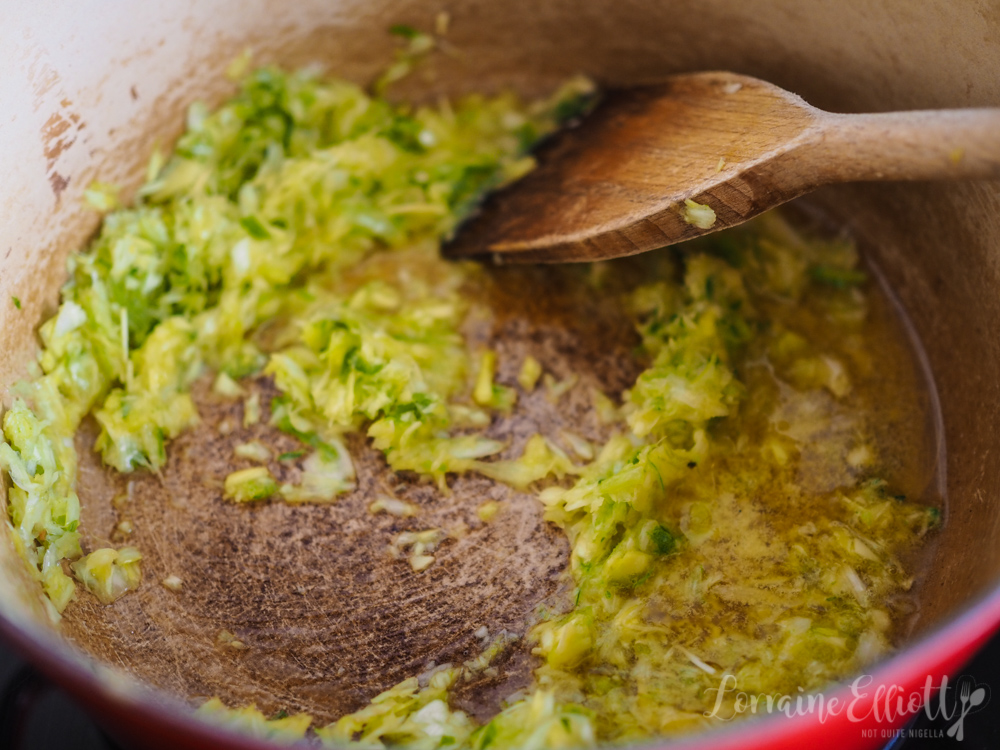 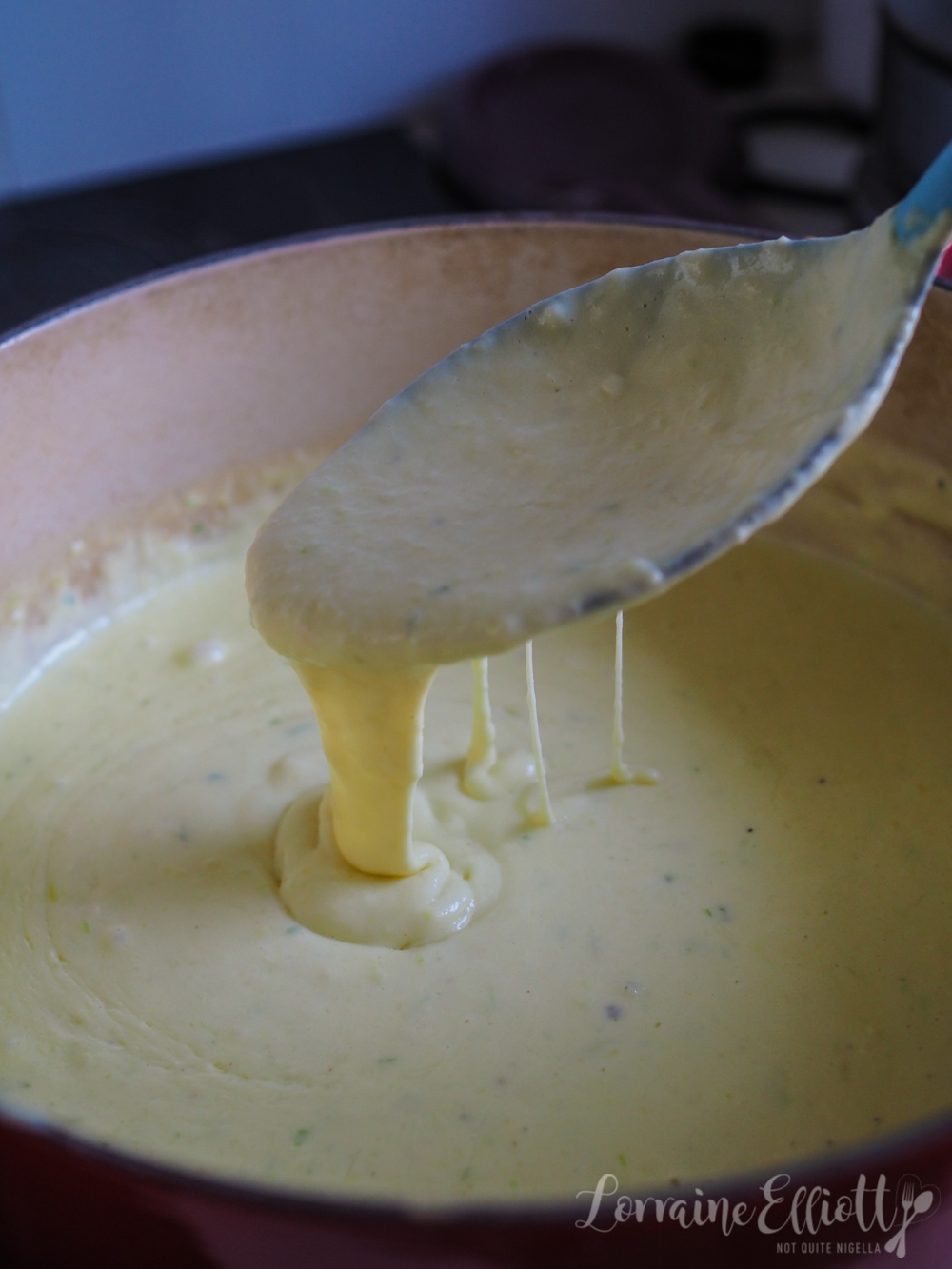 Step 2 -While the pasta is cooking, I make the leek bechamel. Melt butter in a large pot and add the leek and garlic and saute on medium heat. Add the extra lot of butter and melt and then cook the flour in the melted butter and leek mixture. Add the cream in 2-3 lots stirring between each addition. Then add the cheeses in 3 lots allowing it to melt. Season with salt and pepper to taste and stir in the macaroni. 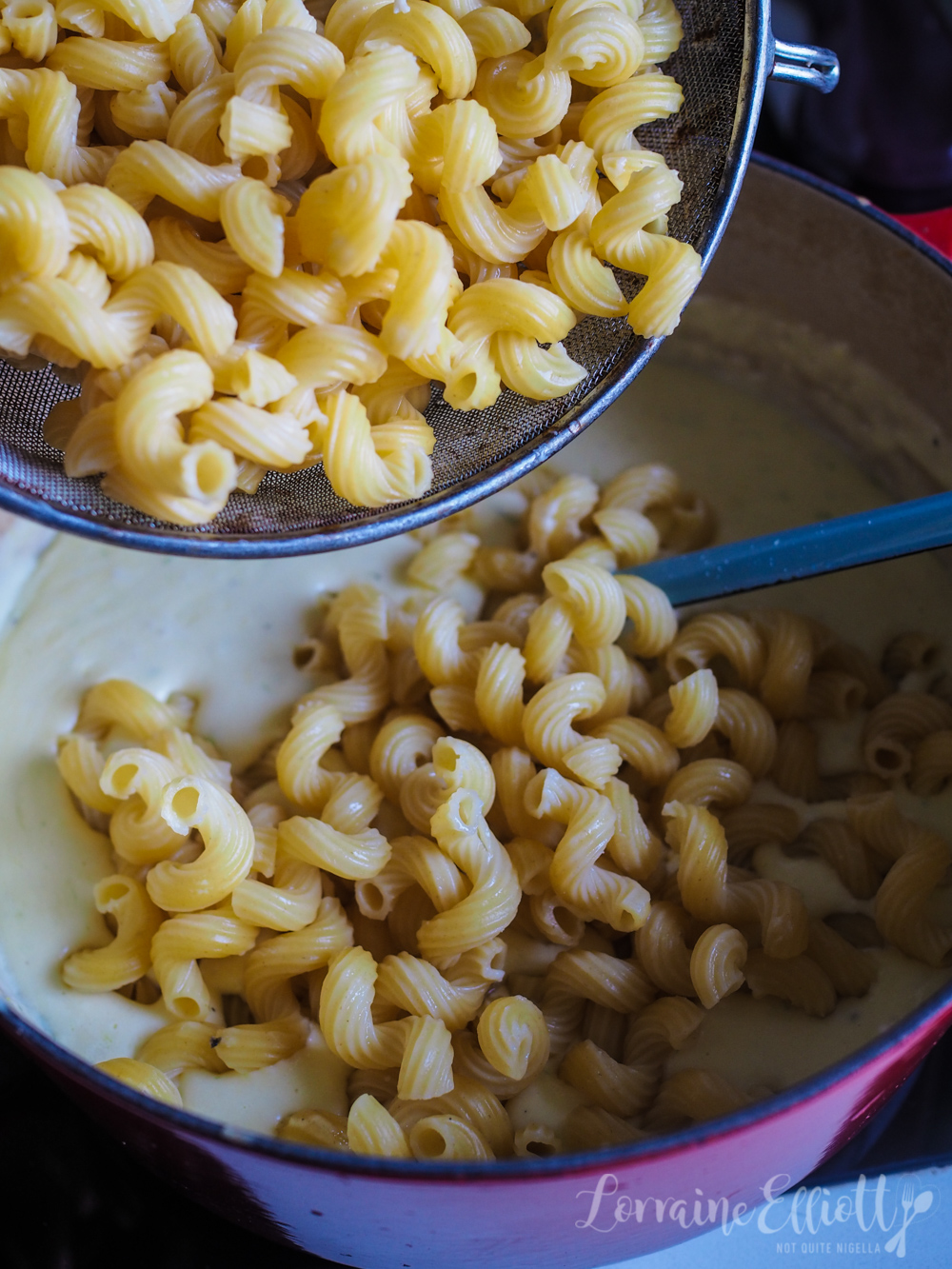 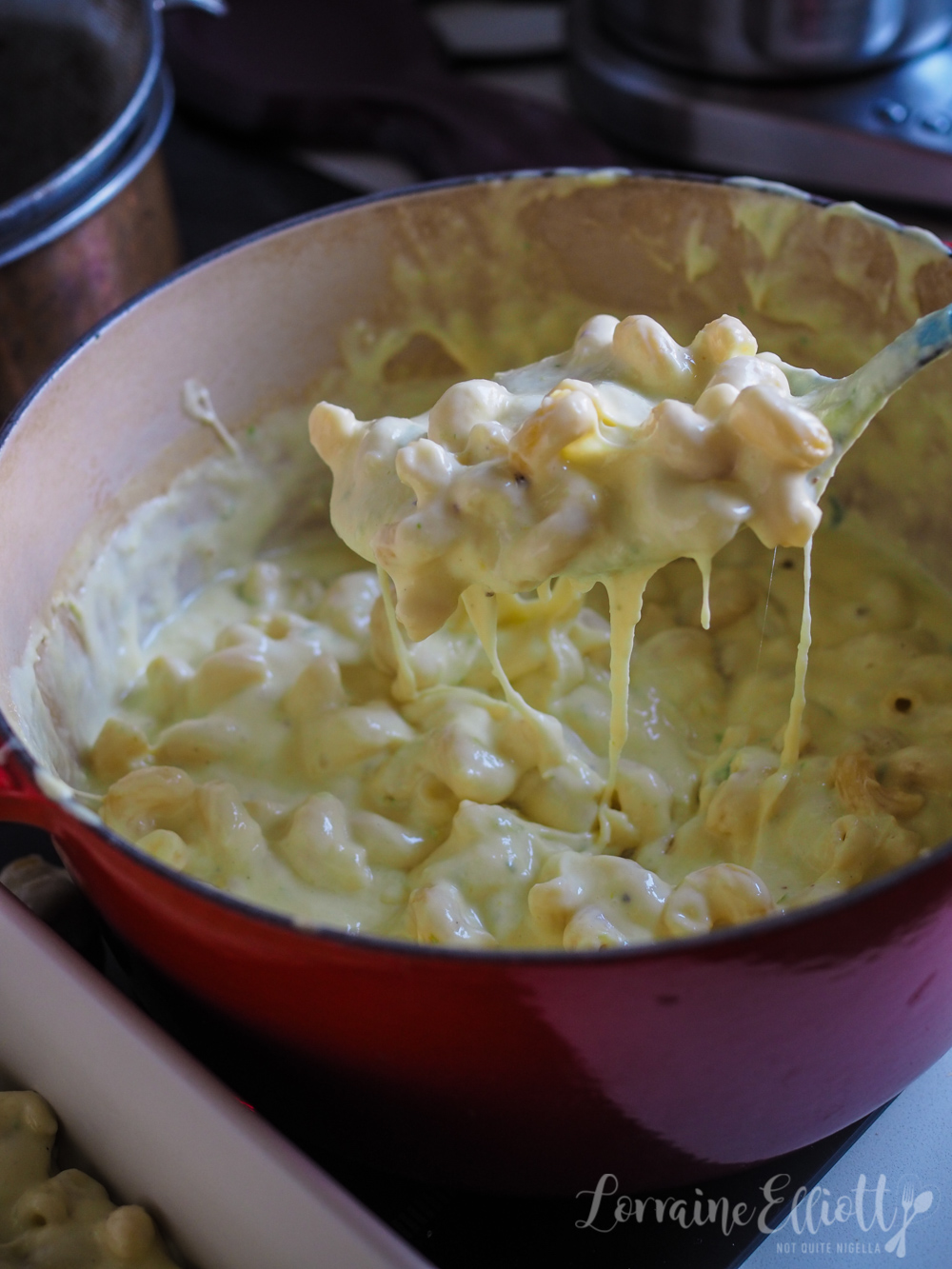 Step 3 -Scoop out into the baking dish. Mix the panko, parmesan and melted butter together and sprinkle on top of the macaroni spreading out to the end. Bake for 20 minutes or until golden brown. Shave fresh truffle on top and serve. 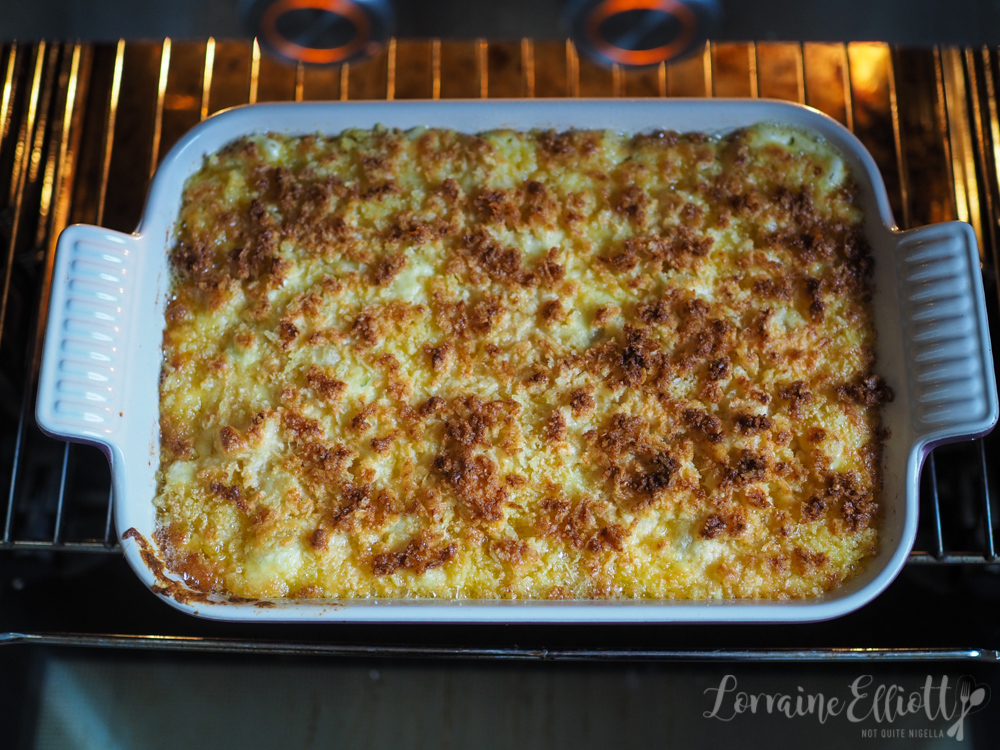 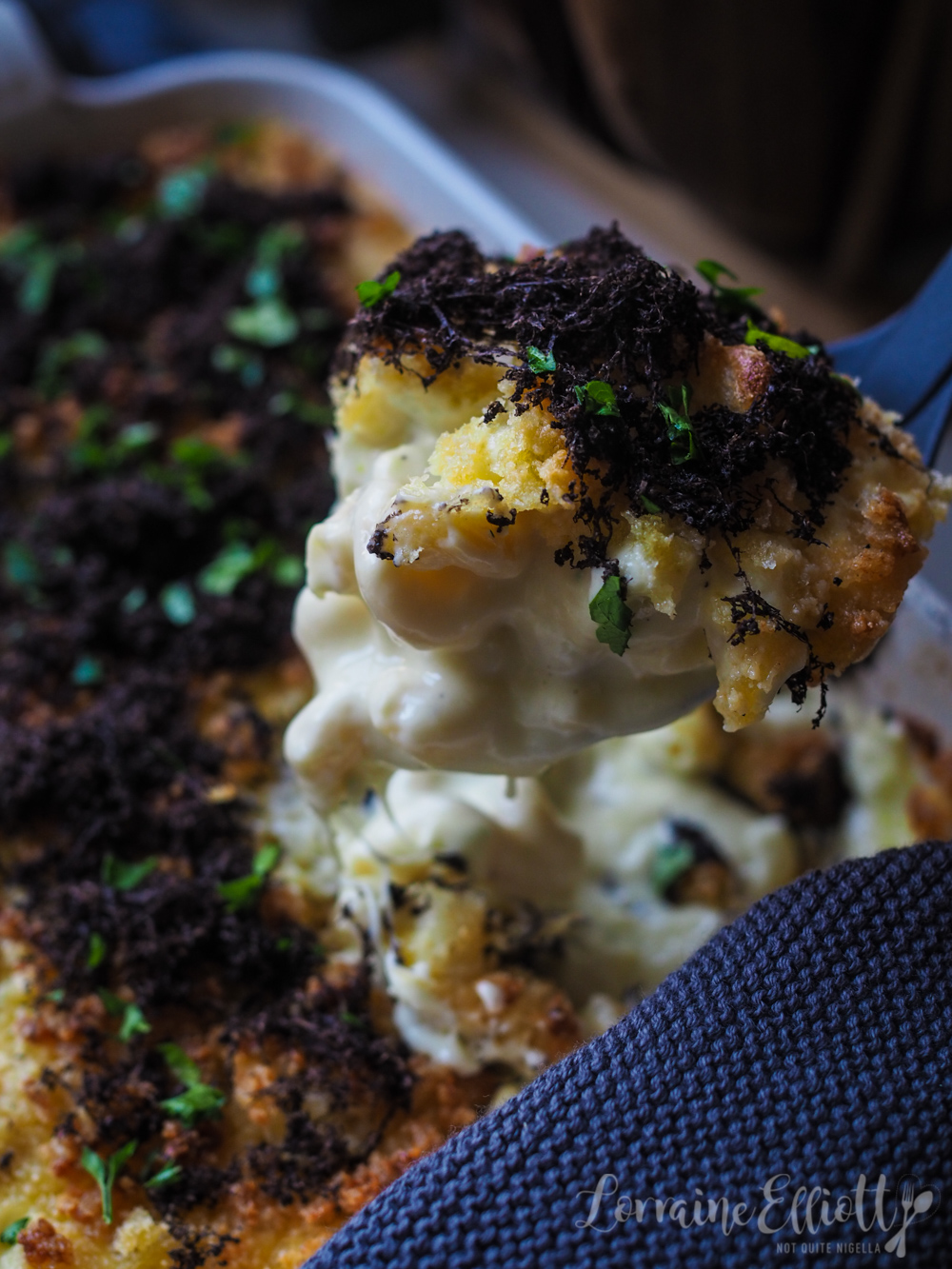