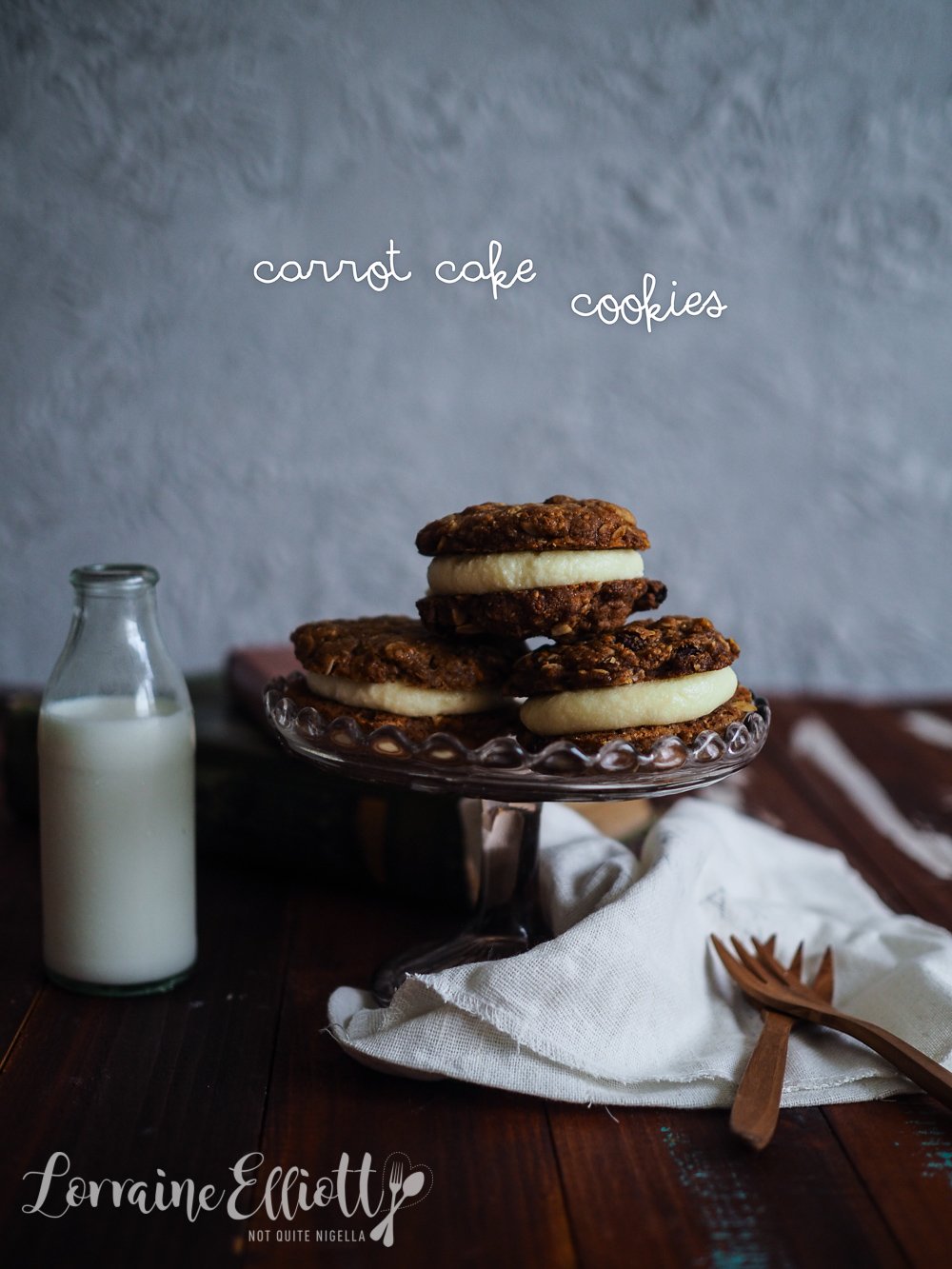 Carrot Cake...cookies? Is that a thing I hear you ask. I promise that it is and they are delicious! Chewy spiced carrot and walnut cookies are sandwiched with cream cheese frosting to make a spicy, creamy sandwich cookie to die for!

Dear Reader, I can't even describe how good these are. They are a chewy cookie with cinnamon, nutmeg and vanilla with chopped walnuts, grated carrot and a bit of oatmeal to make them a bit more substantial. The cream cheese icing is optional (although not optional if you know what I mean). They are delicious by themselves but incredible once you add the frosting. 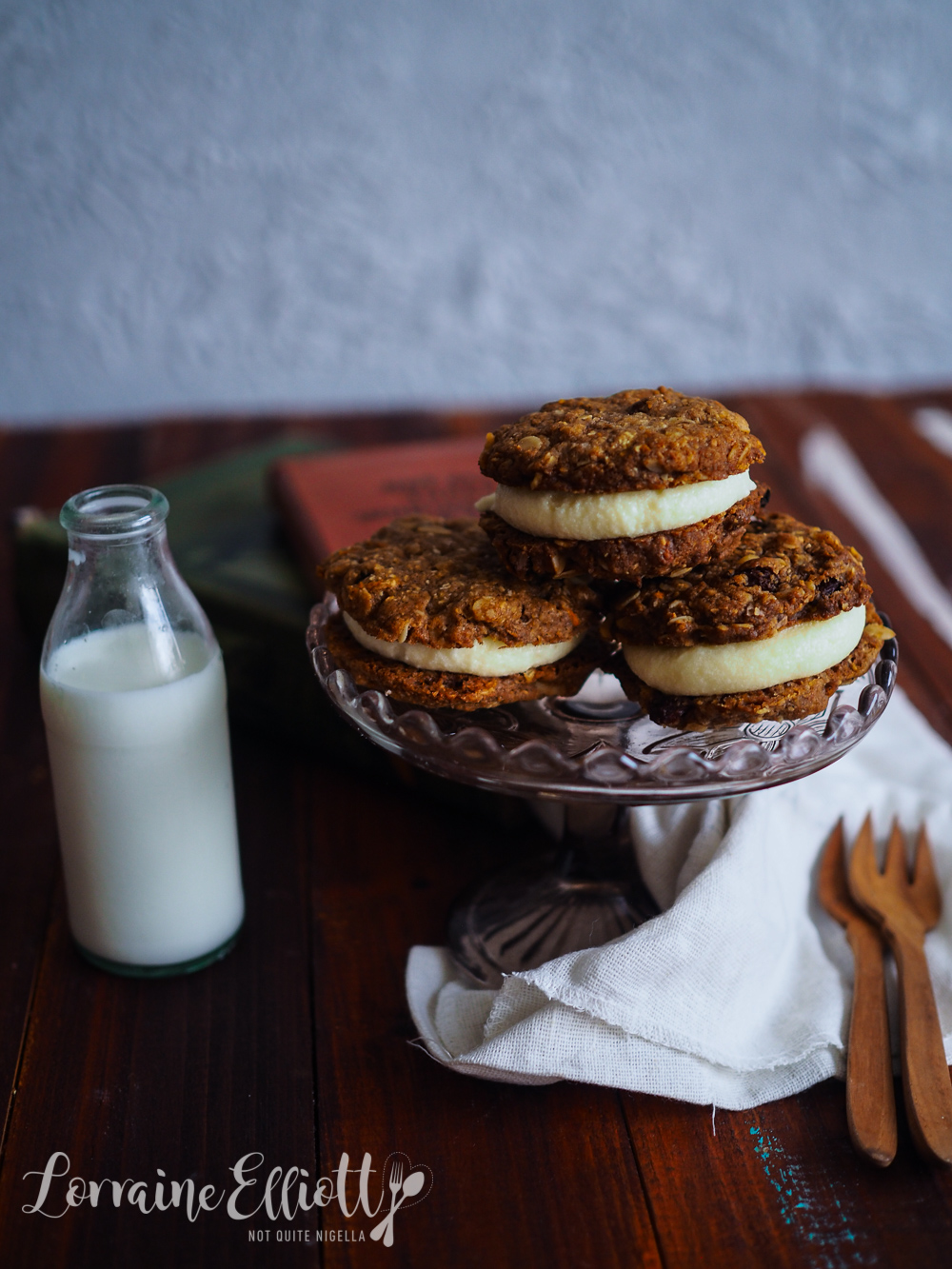 I gave a batch to Mr NQN to take to work. Lately Mr NQN has been really busy at work working longer hours and taking on more responsibility. I don't really mind, he loves his job although there is one little thing that has been happening as a consequence. He just doesn't listen or hear anything that I say.

A couple of weeks ago I went to Mackay in Queensland with Ivy. I usually cook something for him to eat for dinner while I am away so I asked him if he wanted me to cook pizza or pasta and he answered pizza. I cooked him four pizzas and a big container of potato salad and then made him four days worth of lunches. I even showed him the shelf in the fridge that he could eat anything from. He nodded and seemed to understand. 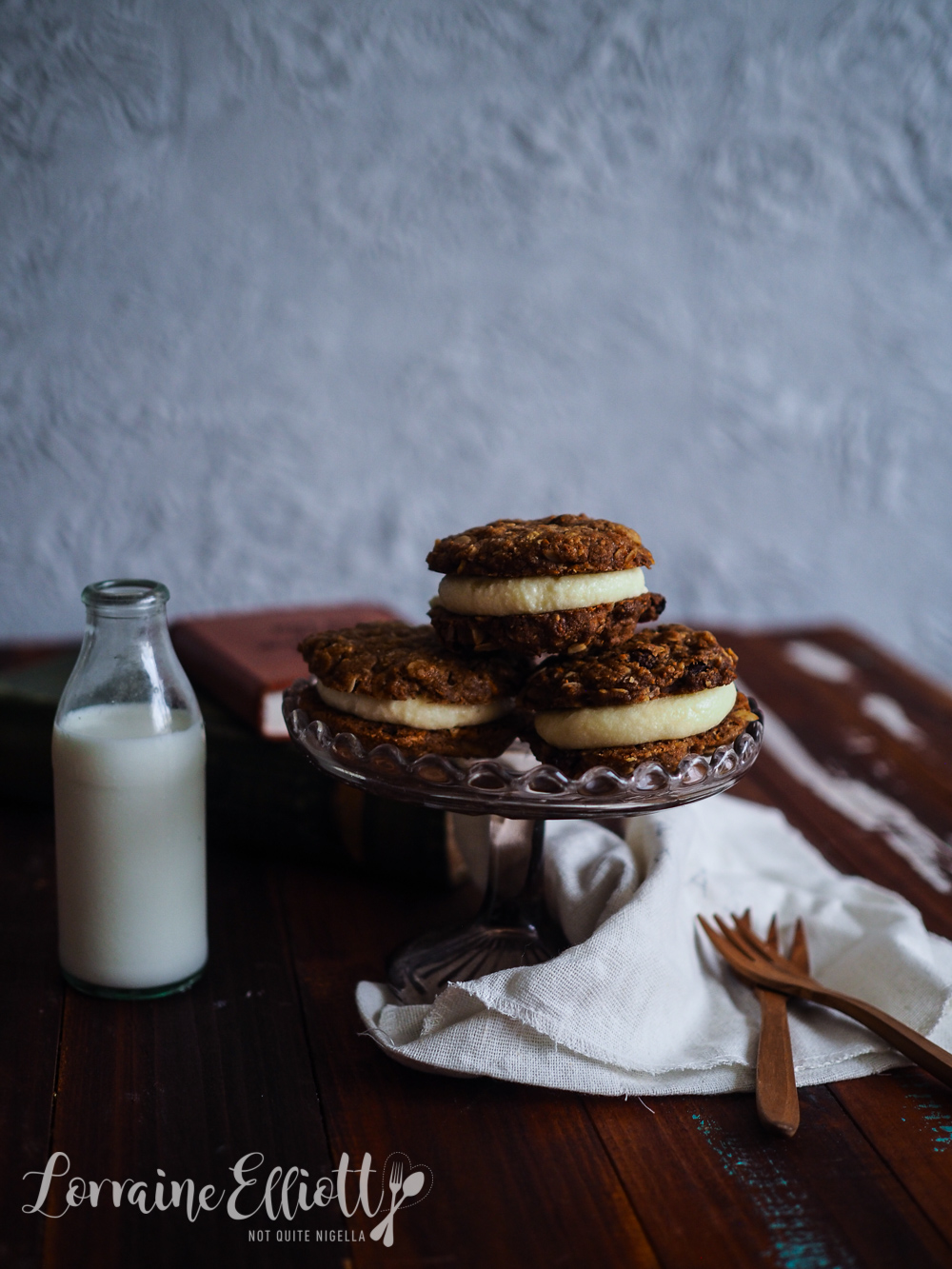 Cut to four days later when he was picking Ivy and I up from the airport. "I didn't realise you made me food so I just made some pasta. I didn't see the potato salad or pizza until yesterday," he said.

"Arrgh! What?" I was unimpressed because I was busy just before the trip and didn't really have time to make food but I did. "I even showed you the shelf with all the food, it was right next to your lunches!" I said to him. "Really? I don't remember," he said. 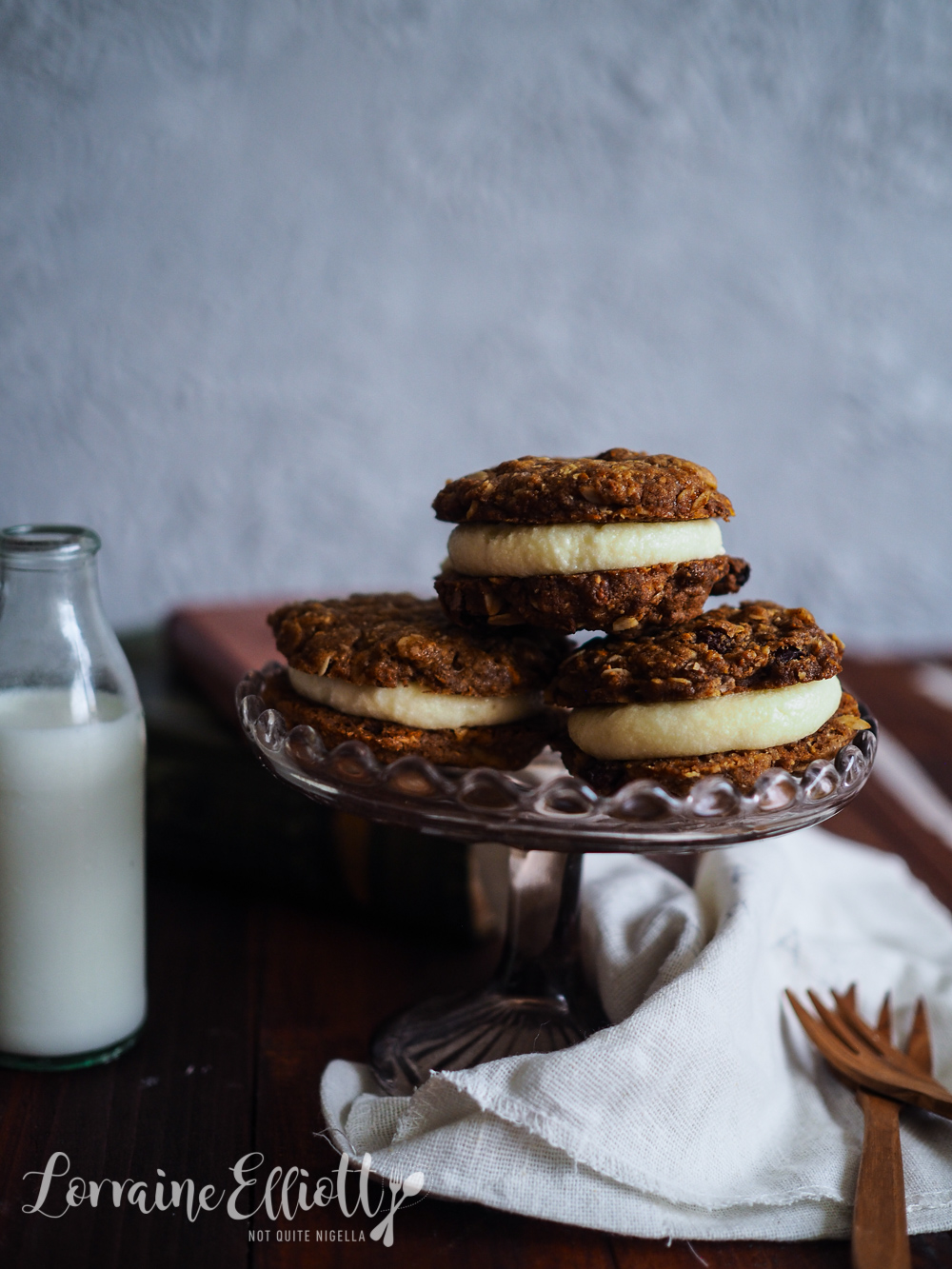 So I've had to start asking him to repeat things back to me so that I know that he has taken it in. When I made these cookies I knew that he would eventually forget what they were so I told him what they were and then quizzed him about it a few minutes later. He didn't remember so I had to get him to repeat it after me. "What did I make?" I asked him.

Hopefully one day we'll get there. I'll say something and he'll just remember it!

So tell me Dear Reader, do you often have to repeat yourself? Any tips to get someone to listen? 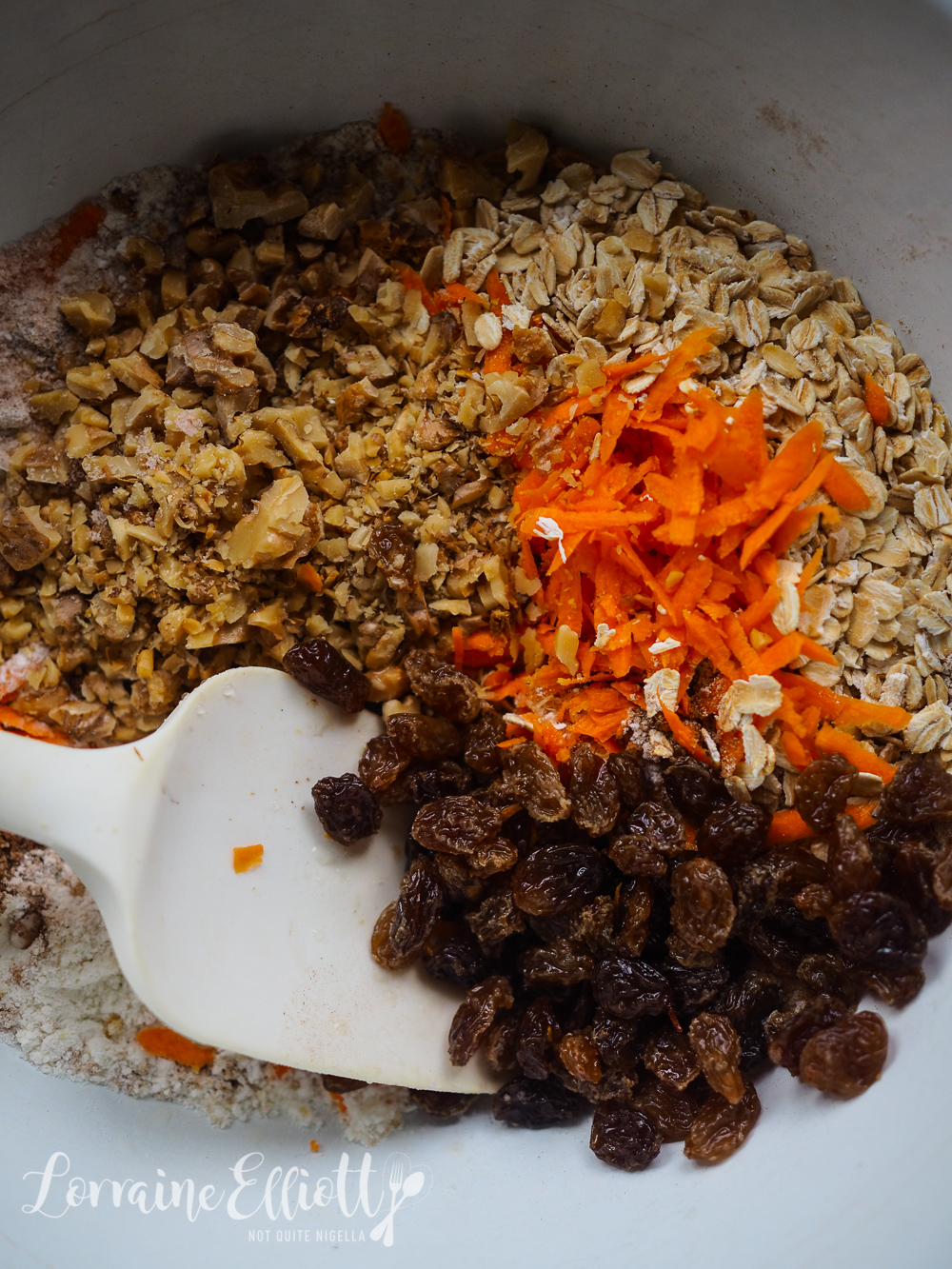 Step 1 - Preheat oven to 175C/350F and line 3 -4 trays with parchment. Mix the flour, oats, brown sugar, carrot, chopped walnuts, sultanas, coconut, cinnamon, vanilla, nutmeg and salt in a bowl until combined. Mix the melted butter and the bicarb water together. Mix with the dry ingredients to form a cookie dough. 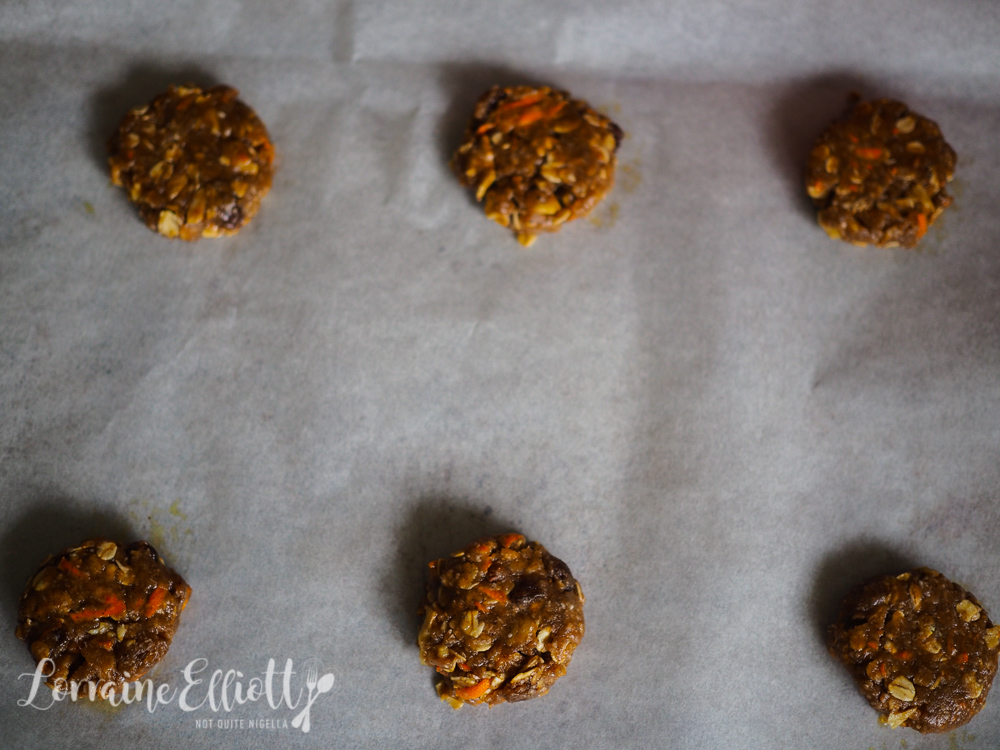 Step 2 - Portion out into walnut sized balls (I used a small ice cream scoop) and press down with a spatula to flatten. These spread a bit so put 6 on a tray. Bake for 15 minutes. Match halves for size.

Step 3 - To make the cream cheese frosting, beat the butter and cream cheese together until smooth in texture. On slow speed add in the sifted icing sugar and vanilla and beat until combined. Then increase the speed and beat until fluffy. Spread some of the frosting and sandwich cookies together. 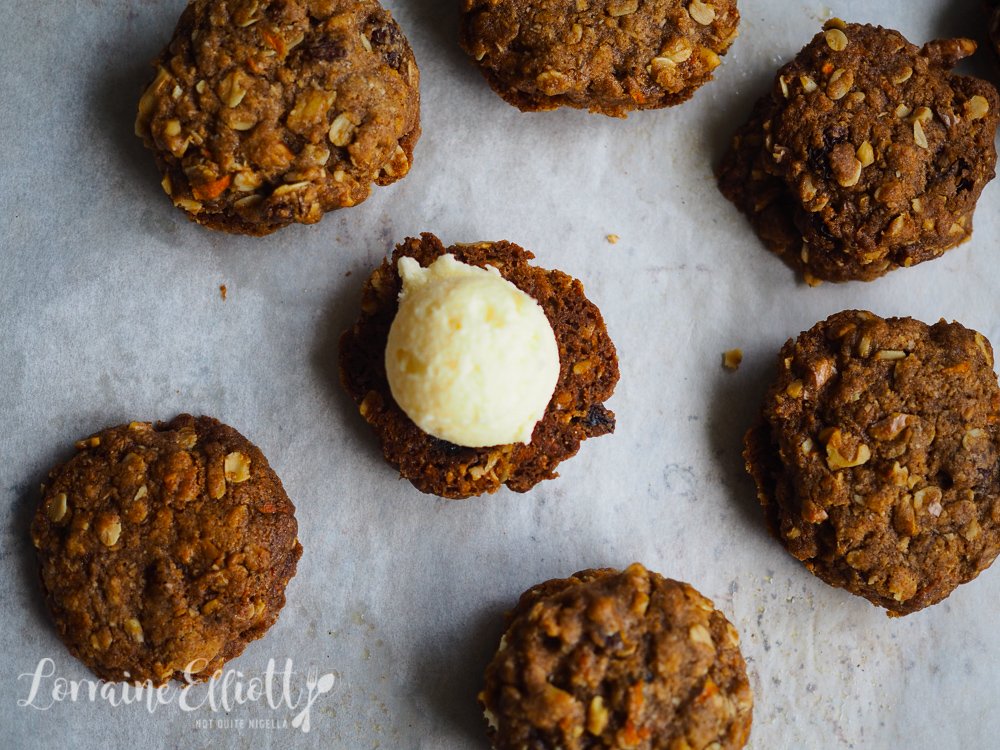 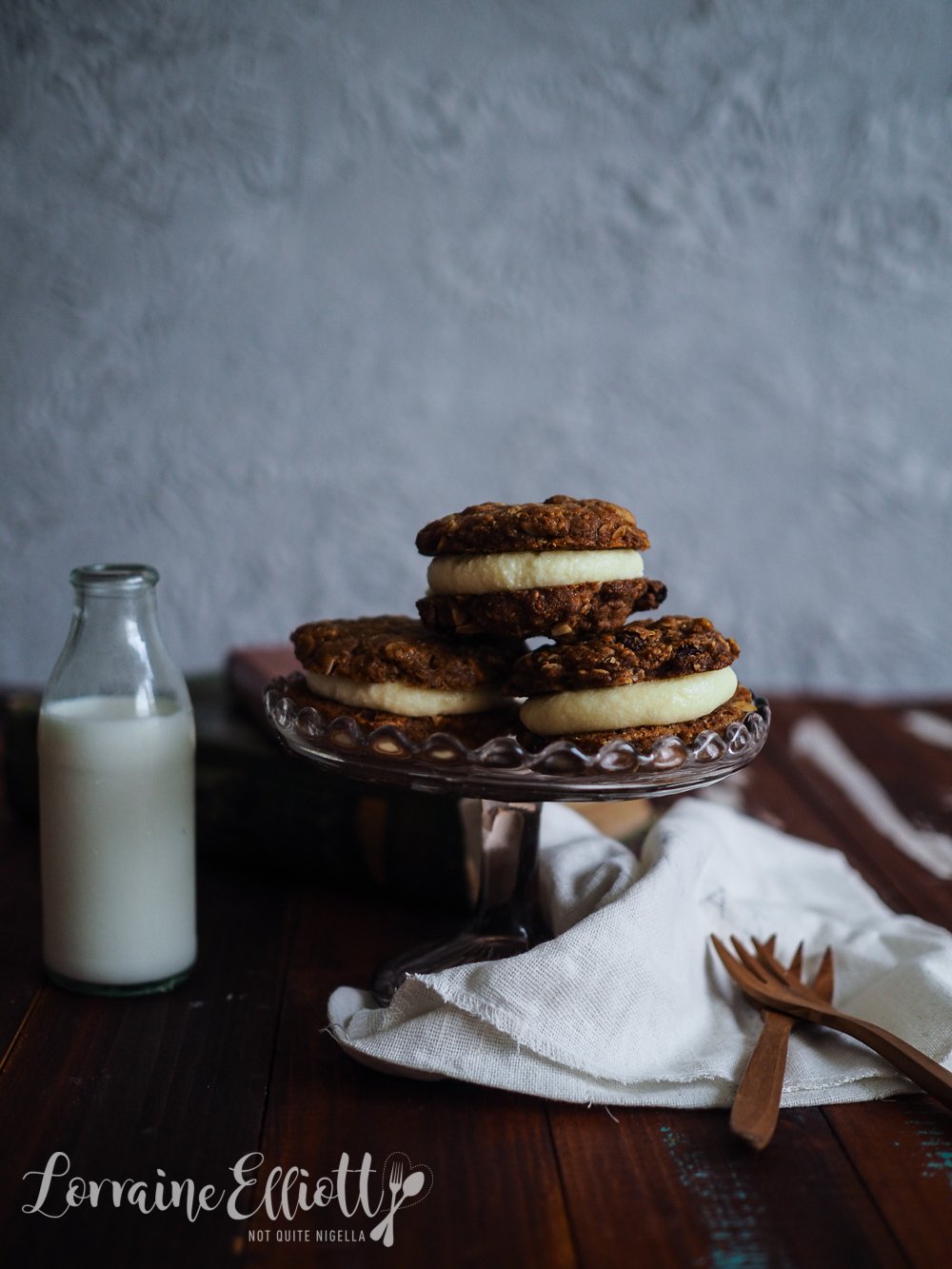