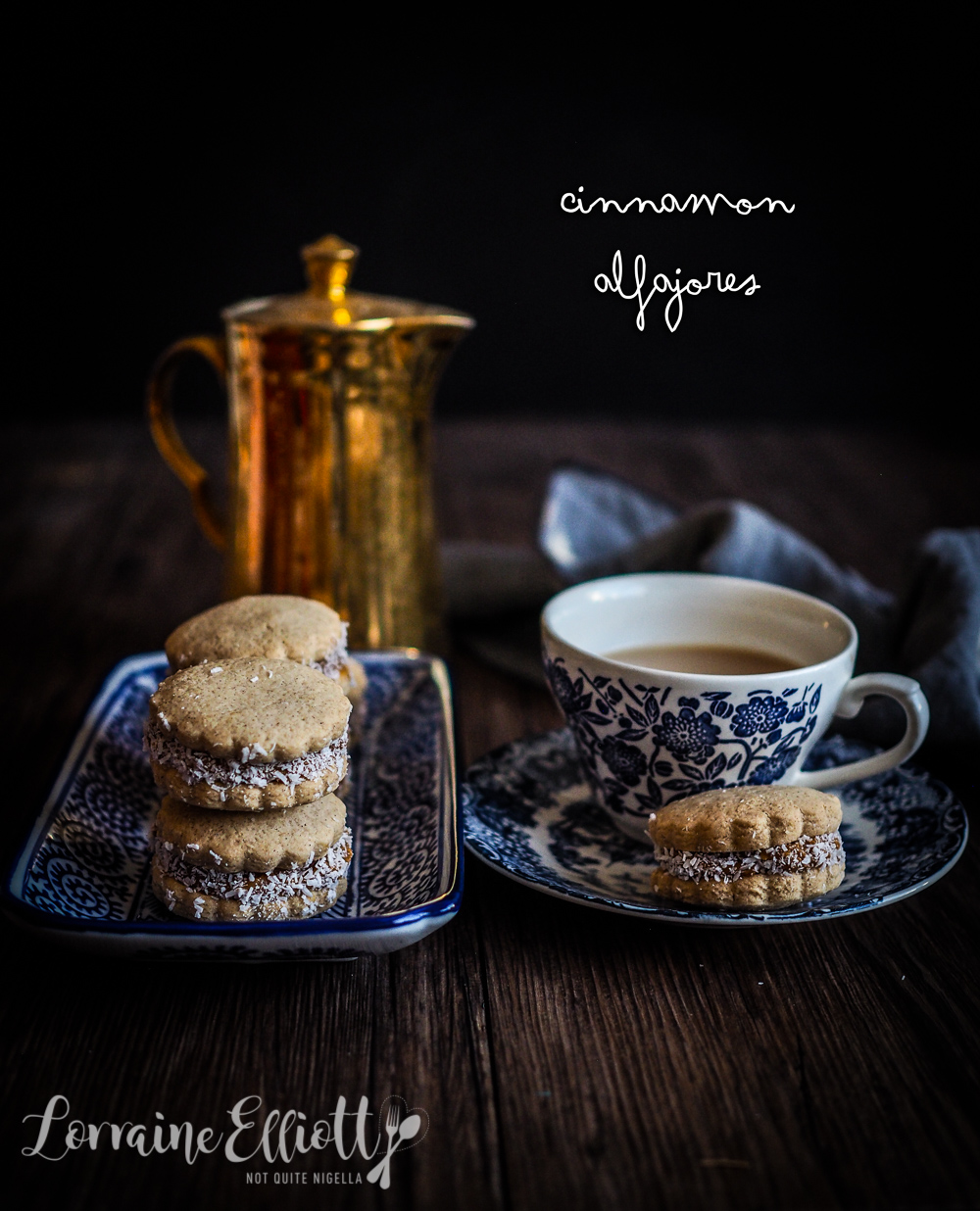 Alfajores are delicious little coconut laced cookie treats. They are a dainty short biscuit sandwiched together with dulce de leche caramel. My version is a riff on the classic South American alfajore cookie with extra spice from warming cinnamon. Have a cup of tea or coffee ready for these!

Speaking of tips, I had a lot of you messaging me about our recent adoption of our puppy Teddy. A lot of you want to adopt rescues but were disheartened by the whole process so I thought I'd share a bit more about Teddy's adoption.

One look at most shelters and you'll see all sorts of sweet faced staffies and pitbulls but they may not be for you for whatever reason. Dogs like Teddy who is a spoodle or a cockapoo do come along. They're not as common but if you're willing to wait a couple of months, they will come along. I've seen all sorts of dogs from pugs to French bulldogs, groodles etc. and while many are seniors, there are puppies too. 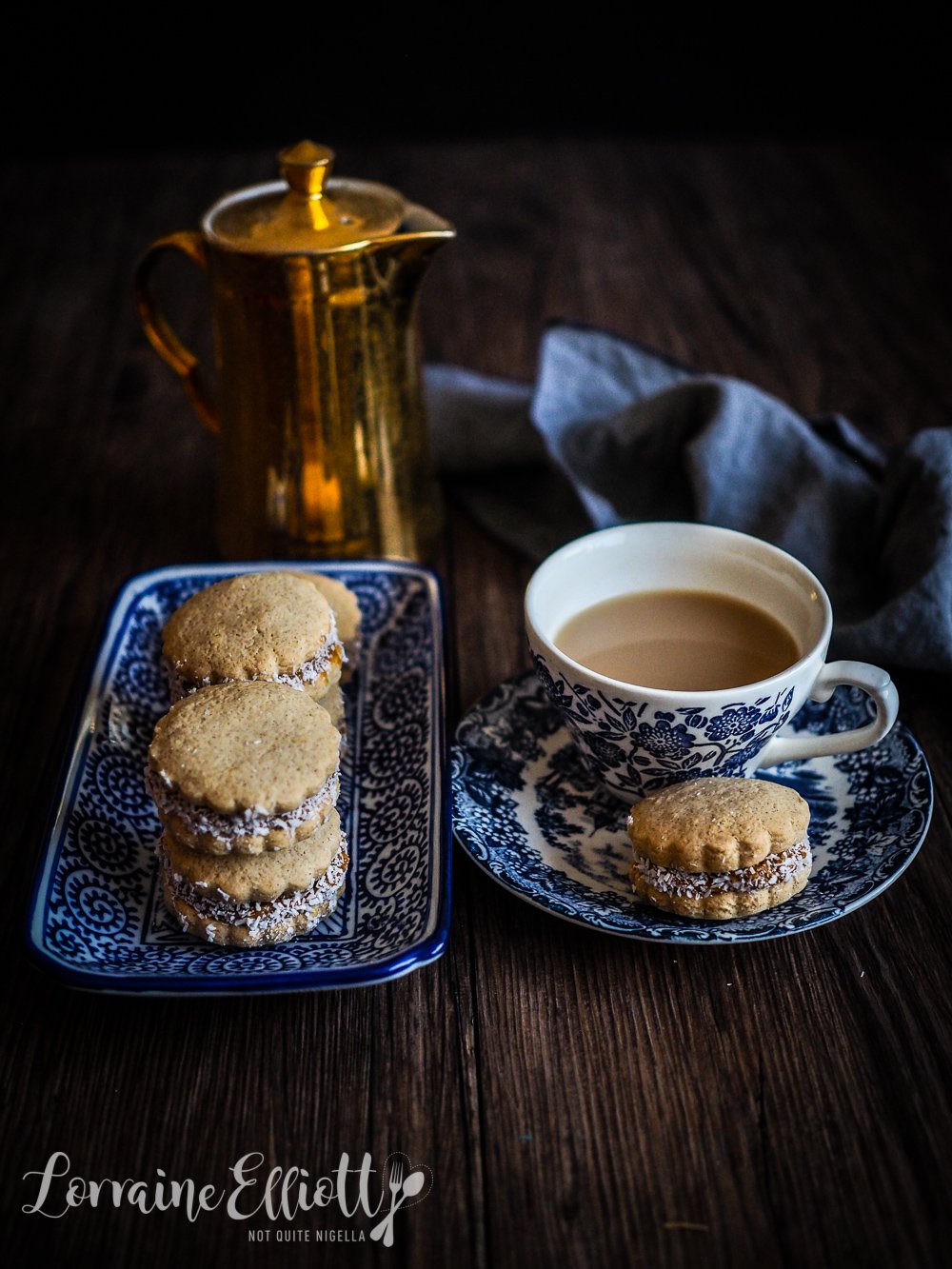 We were fast to answer to the ad for Teddy and sent them a complete description of us and our house. Many rescues are run by volunteers so they're short in time and they often just receive one line replies saying "I want to adopt the dog."

Having said that, we had so many rejections. One woman really wanted us to adopt her dogs but then changed her mind at the very last minute and we were all ready for them. That was quite a blow to us. We didn't think we stood a chance with Teddy and we were told that they were inundated with requests for him.

15 week old Teddy came to the rescue group Claws and Paws on the Central Coast from a breeder. There weren't any papers, nor any information about his breed, age or any shots he had. We guess he hadn't sold from his litter because he was a bit shy and he had gotten too old to sell at 16 weeks (people want really young puppies at 7-9 weeks to shape their development). Sadly other times puppies aren't sellable because they have the wrong coloured nose or aren't show worthy and breeders pass them onto rescue groups. 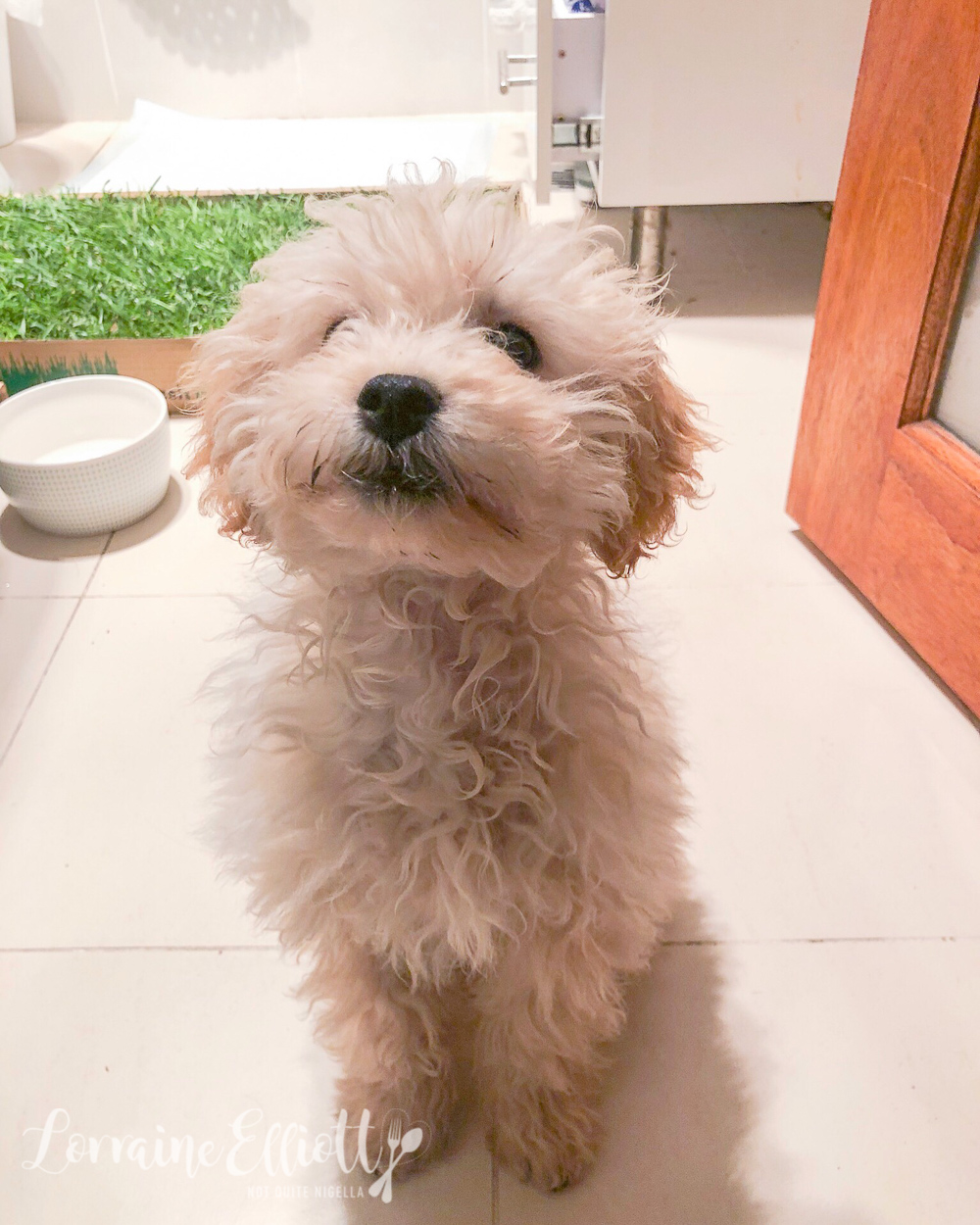 Teddy trying his best to be a good boy

The truth is young dogs subsidise the older dogs at rescue organisations. Puppies are more expensive and can cost around $1,500-$1,900 while seniors are around $400 and adults $700 (approximately) but dogs usually come with vet checks, certain shots and usually are desexed. Teddy was $1,500 and the rescue uses the money towards vet bills often for the older dogs that need more work and often don't get adopted out.

So if you are looking to rescue or just curious about it, don't give up. It just takes time. And if you are tossing up between a breeder dog or rescue, I recommend watching the amazing Life in The Doghouse on Netflix. And watch it with a cup of tea or coffee and a batch of these cinnamon alfajores!

So tell me Dear Reader, have you seen this movie? Have you ever adopted a rescue? How was the process for you?

Step 1 - Whisk the two flours, salt, baking powder and baking soda together. In the bowl of a mixer beat the butter and sugar with a paddle attachment until light and fluffy. Add egg yolks and cinnamon and beat again. On the lowest speed add the flour mixture and beat until incorporated. Wrap in cling film and rest for 1 hour. 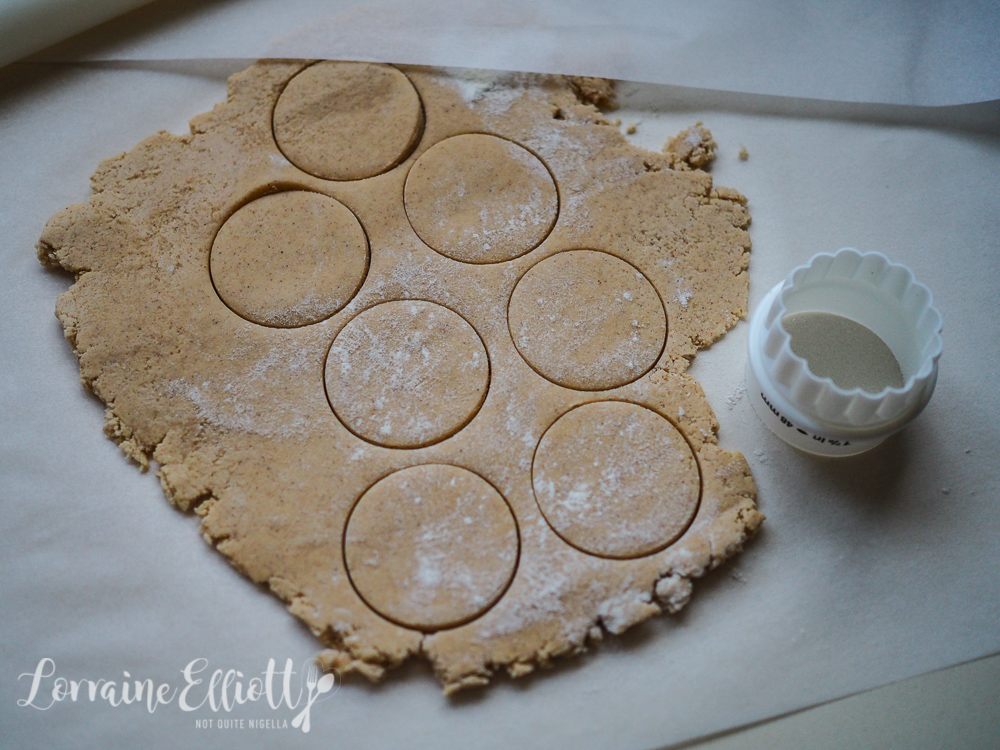 Step 2 - Line 3 trays with parchment. Roll out between two sheets of parchment. Cut into 3-4cm fluted rounds and place 1/2 an inch apart on the baking trays. Place in the fridge for 20 minutes. 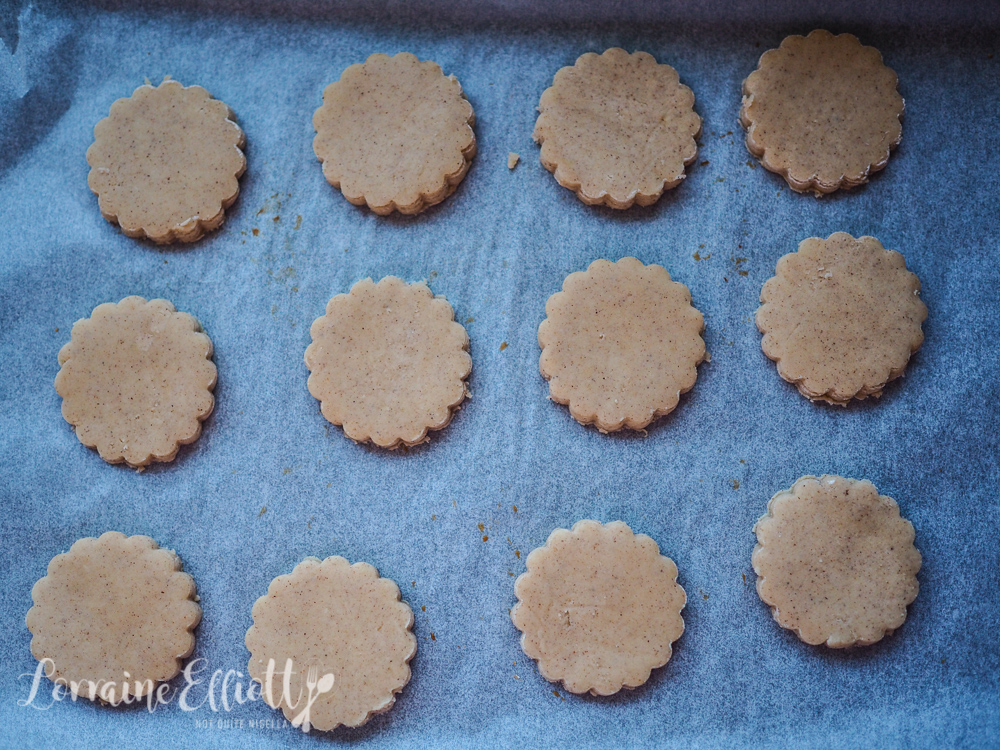 Before baking, after resting 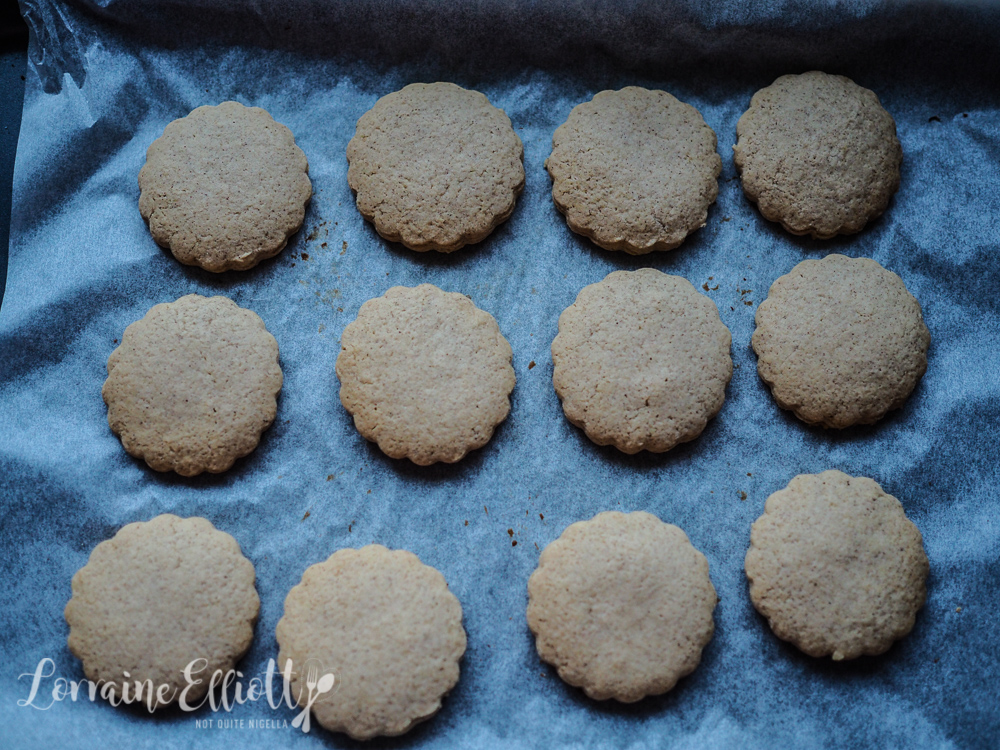 Step 3 - Preheat oven to 180C/350F. I do this one sheet at a time because when I put in one tray at the top of the oven the cookies cracked on the top. Place in the middle rack of the oven and bake for 13 minutes or until set in the centre. Cool completely. Mix the dulce de leche with cinnamon and spread onto cookies and sandwich together. 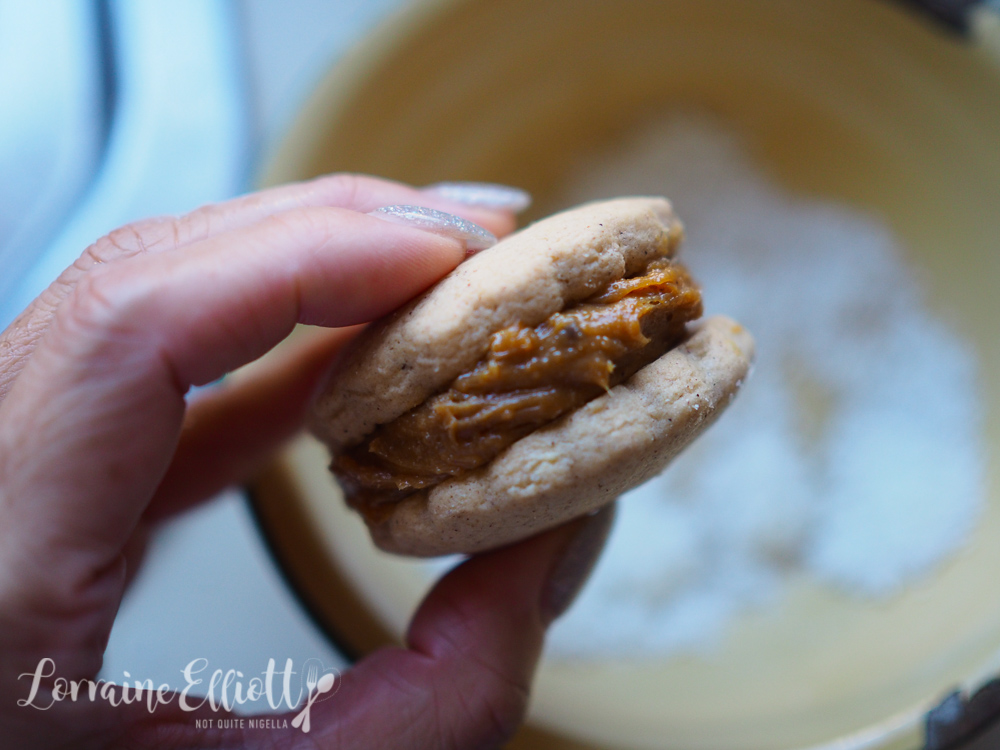 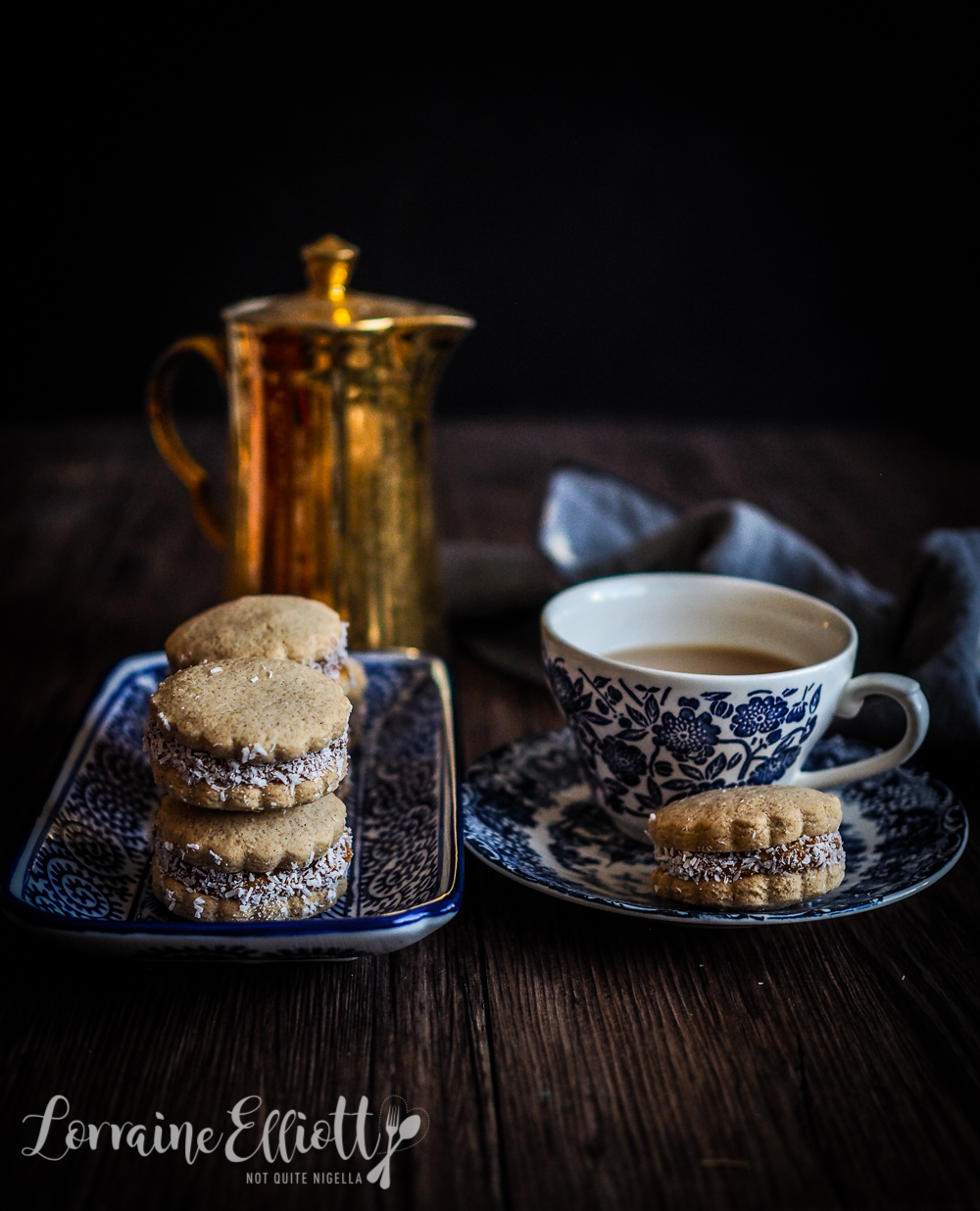