Bucks Fizz: How To Make Kombucha with Instructional Video! 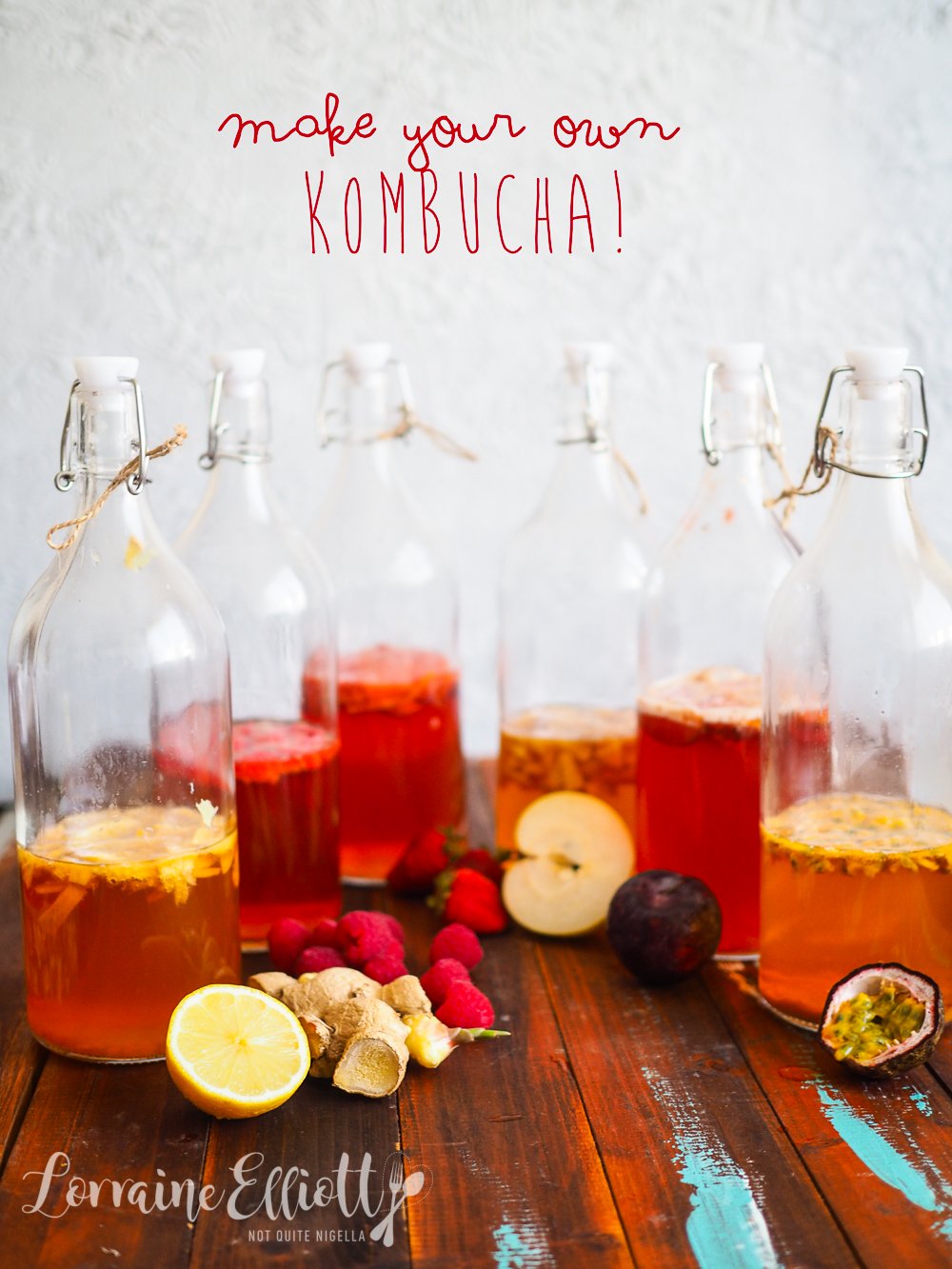 Dear Reader I am so excited to share this recipe with you! You see my obsession for the past year has been kombucha. I used to buy several bottles of this each week and at $6-$7 a bottle it isn't exactly a cheap habit. But then my friend JY showed me how to make my own kombucha and I haven't looked back! Make litres of your very own kombucha in a range of delightful flavours or flavour combinations that taste so much better than commercial kombucha!

A little back track here if you're unfamiliar with kombucha. It's a carbonated brewed tea drink that some say originated in China thousands of years ago. It's fermented and is based on a SCOBY (Symbiotic Culture Of Bacteria and Yeast) mother much in the same way that sourdough has a starter or mother. It is said to have a number of health benefits to it. eg. it aids in gut health as a source of probiotics and antioxidants. 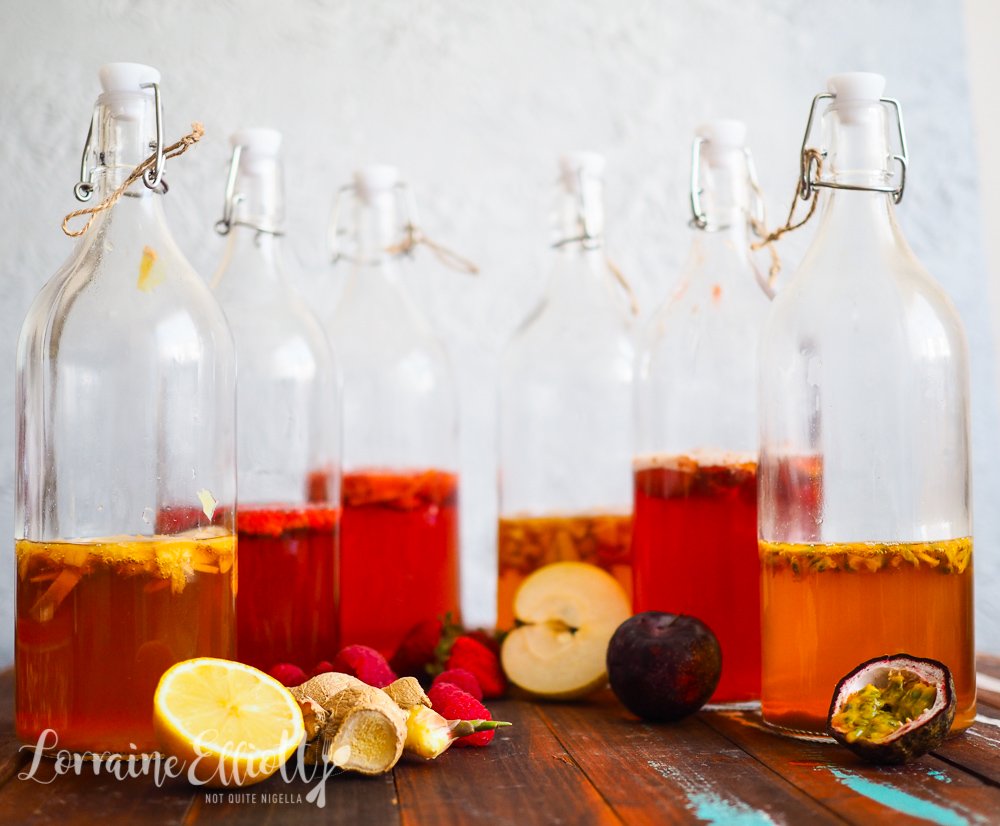 But for me, I just love the taste. If you've drunk a vinegar based shrub it is similar in flavour. But because it is a fashionable drink having made its way to supermarkets, cafes and even cocktail menus it isn't cheap.

A 1 litre bottle only needs a little bit of fruit added to it so it's inexpensive to make and it's also fun seeing which fruit you can add. I even get Mr NQN involved in it. Every Sunday we make our next week's batch. And I can't bring myself to buy any if we run out because none of the commercial ones come close. Some use sweeteners which I loathe and all of them get flat too quickly. Home made kombucha stays fizzy til the very last drop. 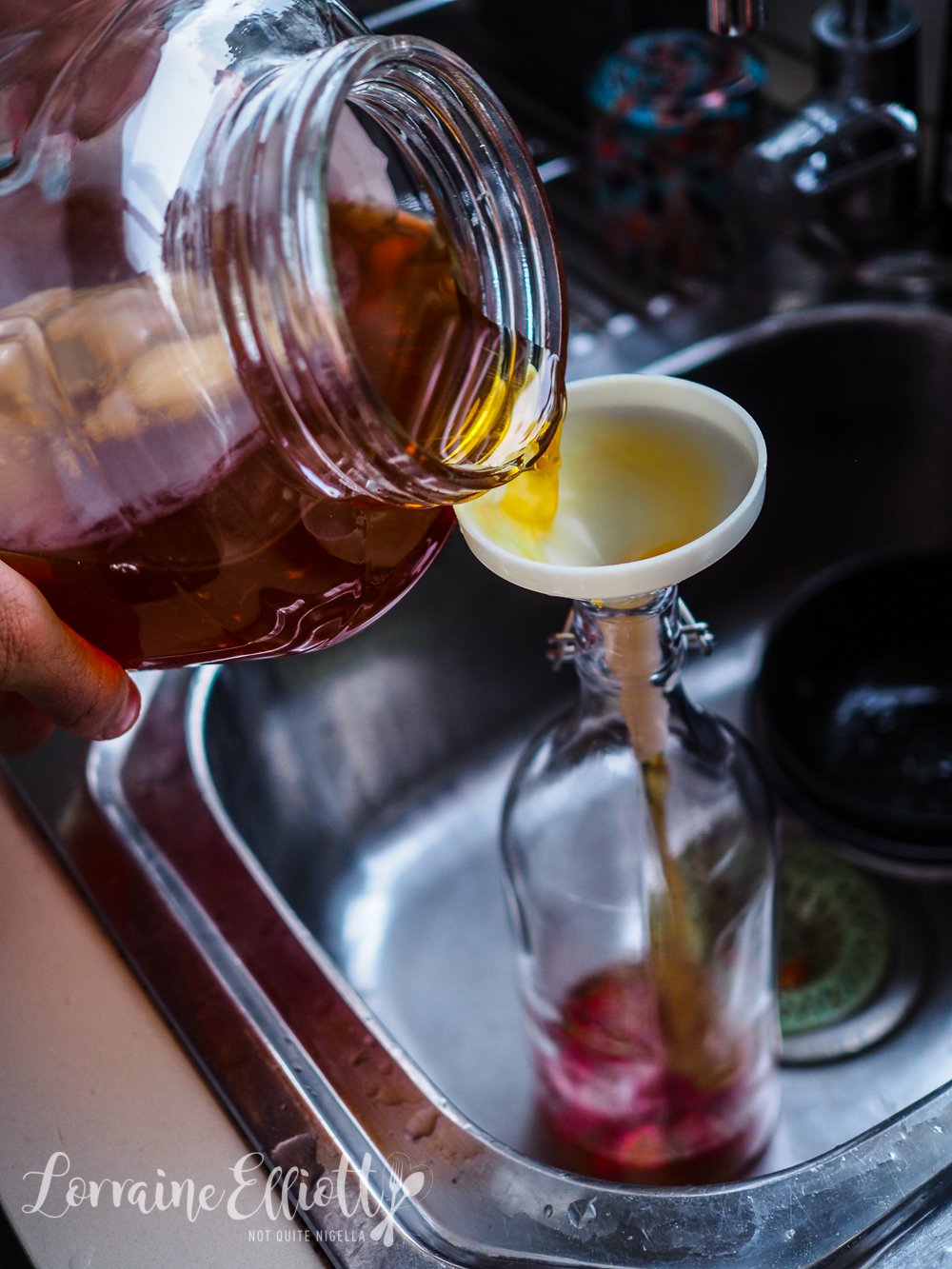 I am going to put this out there: no commercial kombucha tastes as good as this home made kombucha. And with this tutorial you can make your own as well as save on those bottles. The flavour combinations are endless (there's literally no bad flavour and all fruit works although truthfully there are a couple that I wouldn't rush to make again). And it just starts with nothing more than a SCOBY which you can easily buy online (or get it from a friend that makes kombucha, they'll have plenty), tea bags, water, sugar and fruit.

On the topic of sugar, Kombucha has a small amount of sugar in it. Although it starts off with 1/2 cup of sugar per litre of brewed tea, the SCOBY eats much of it up. I also actually miss the stuff when I go away I love it that much (Kombucha Anonymous group anyone?). 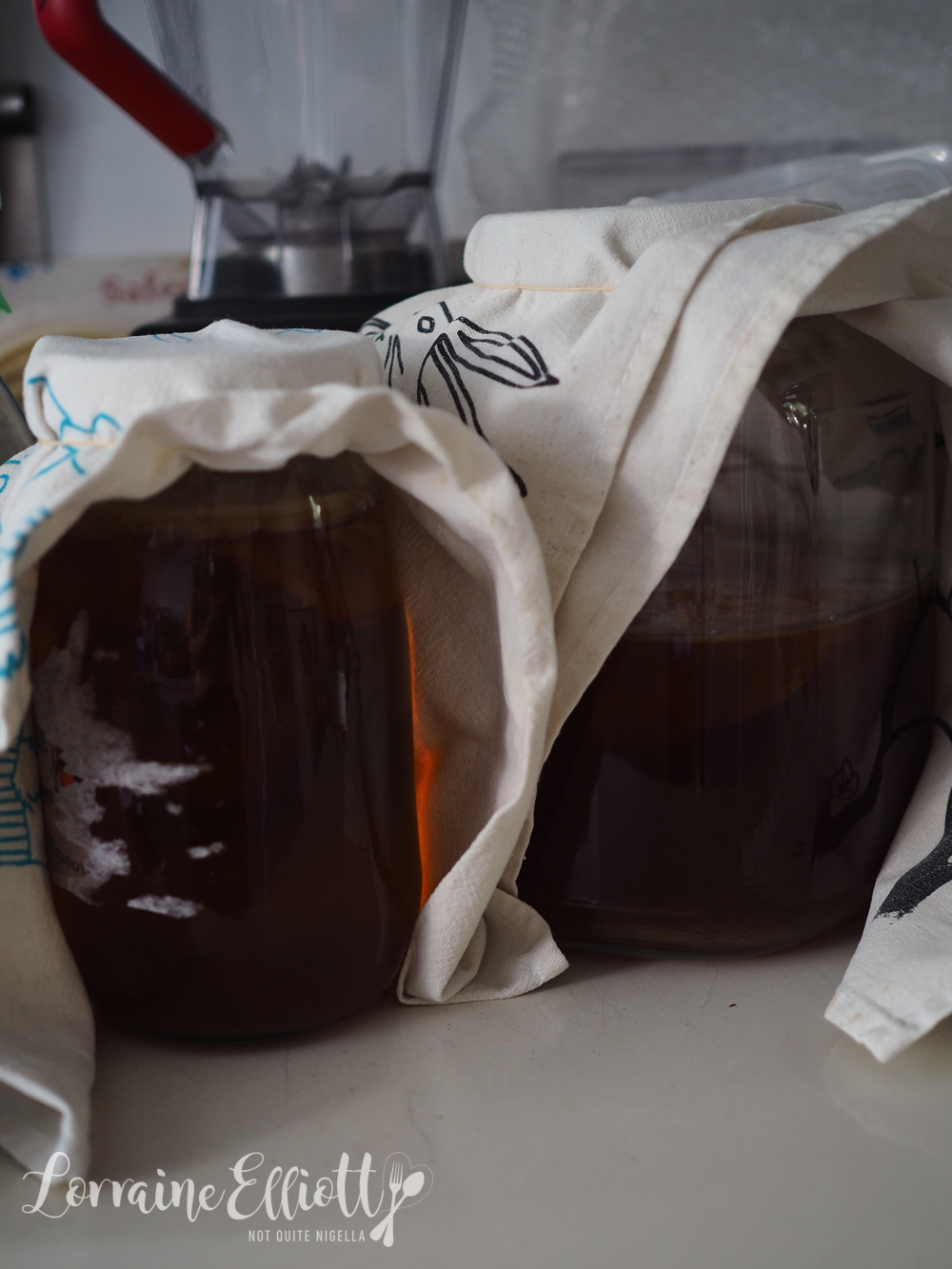 In the first batch we made 6 flavours including raspberry, strawberry (that tasted just like strawberry jam), roasted plum, nashi pear, lemon and ginger and my favourite ever by far was passionfruit. Since then we've made pretty much every fruit we could get our hands on and we still aren't bored and make 3 litres every week. We have also made kombucha with watermelon, persimmon, custard apple, crystallised ginger, grape, pomegranate, mangosteen, quince and apple. You can also add in flavours like vanilla or spices like cinnamon or herbs like rosemary or thyme.

The only flavours I didn't overly love were banana and fig. Banana as expected was a bit odd (but still totally drinkable) and fig tastes like fig leaves rather than fig itself. 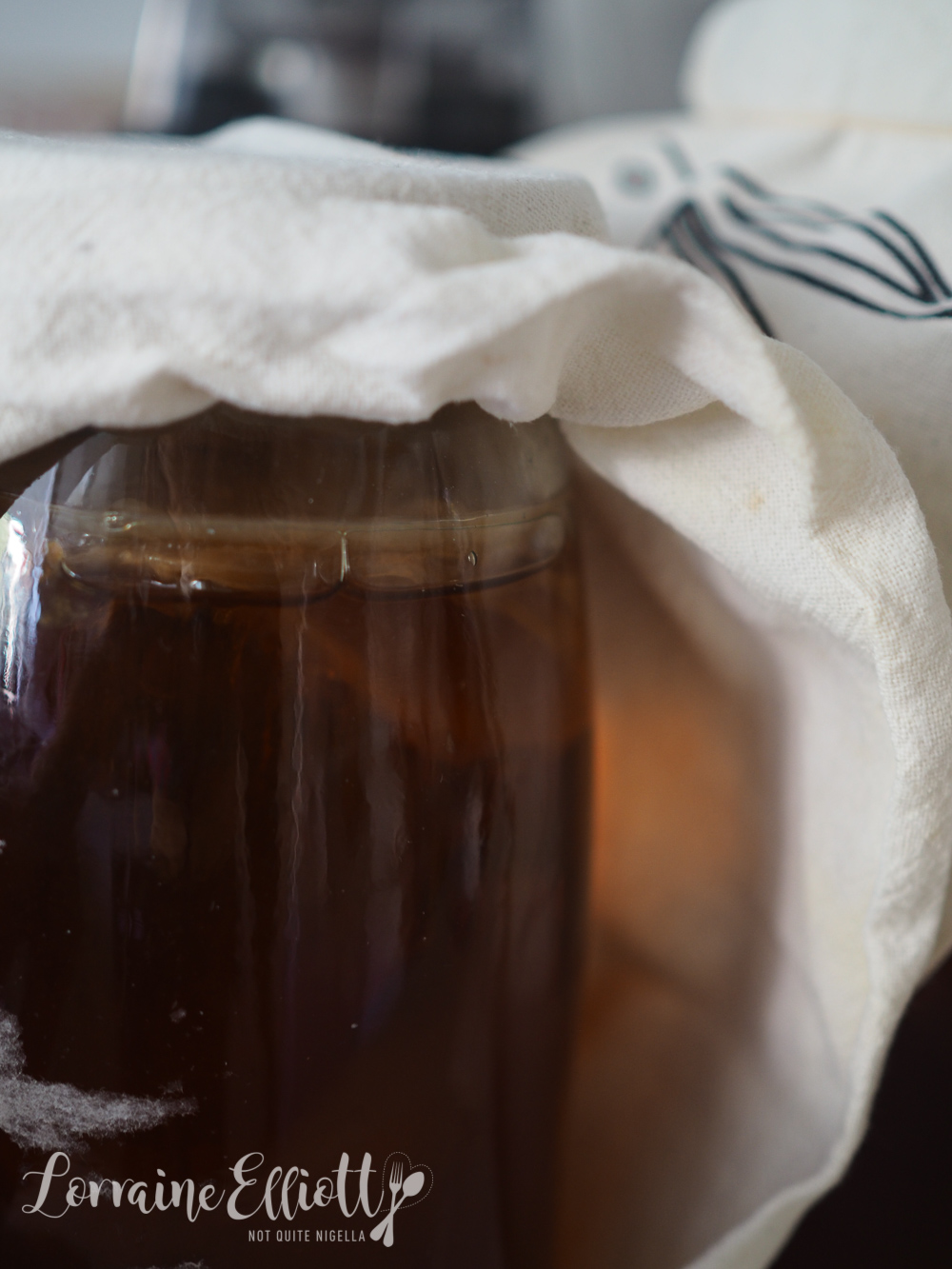 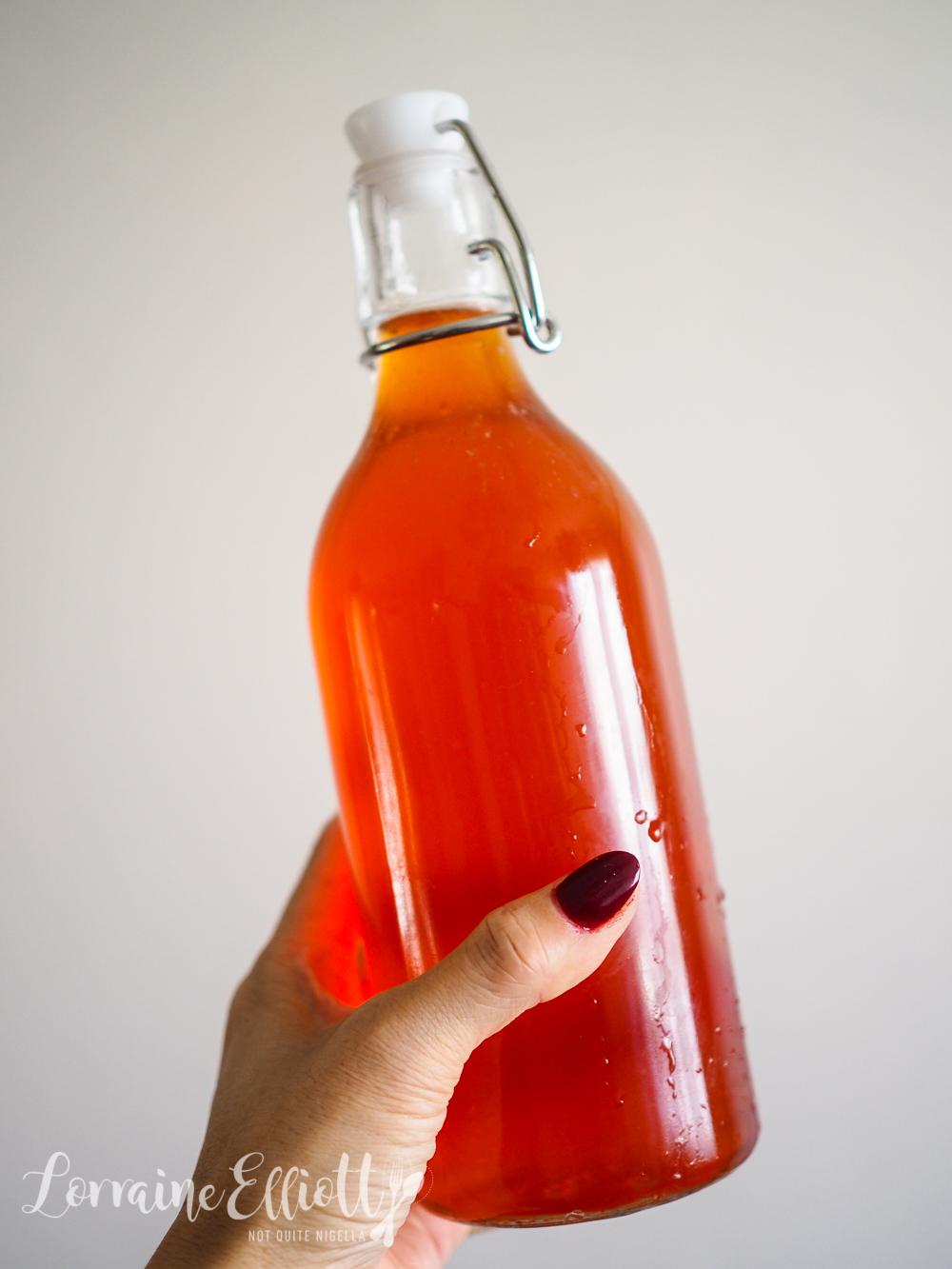 So tell me Dear Reader, are you a kombucha fan? Have you got a favourite flavour? 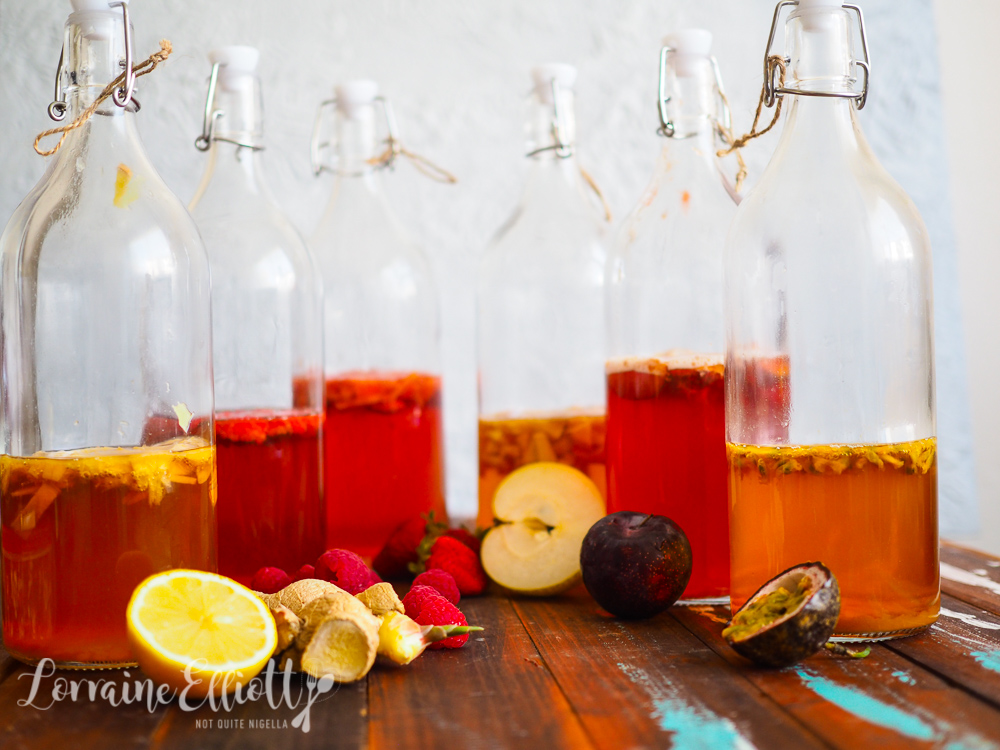 Buy SCOBY from health food stores or online or get it from a friend that makes kombucha. 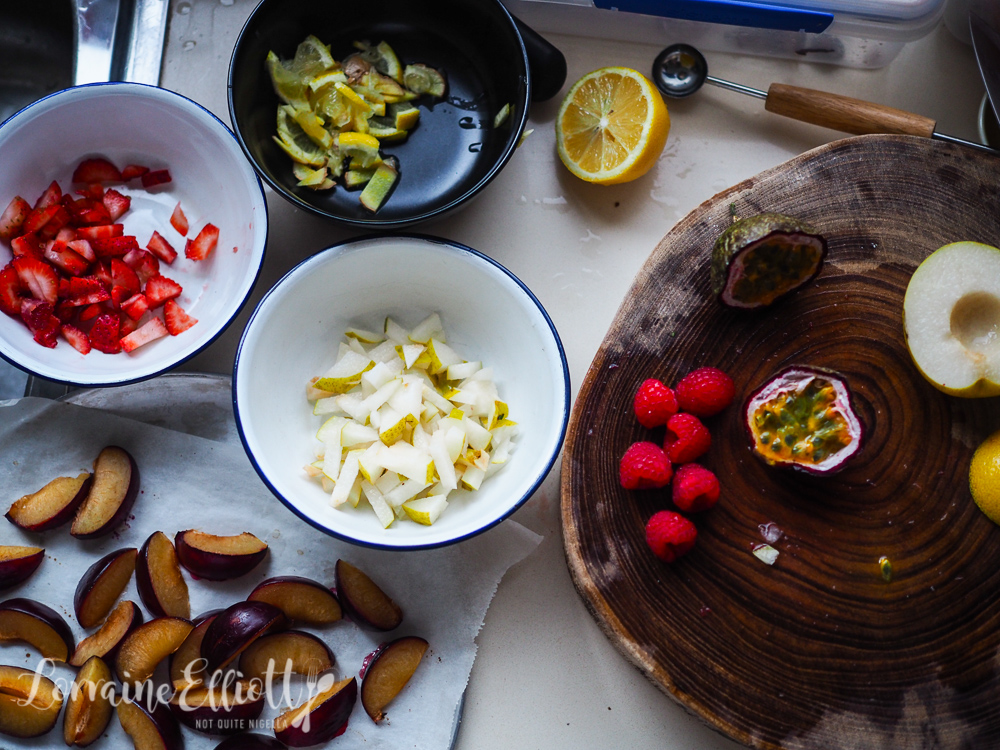 Kombucha is made in two steps. The first one takes 7 days and the second step takes 1-2 days.

Step 1 - Dissolve the sugar in the water and steep tea bags for 10-15 minutes to make a strong brew. Cool completely. Add to a large clean glass jar along with your 1/2 cup of SCOBY liquid and pellicle membrane. Cover with a tea towel and secure with an elastic band or string. Allow to rest in a dark, warm area of your kitchen for 7 days and try not to move it during that time (on top of a fridge is a good place). 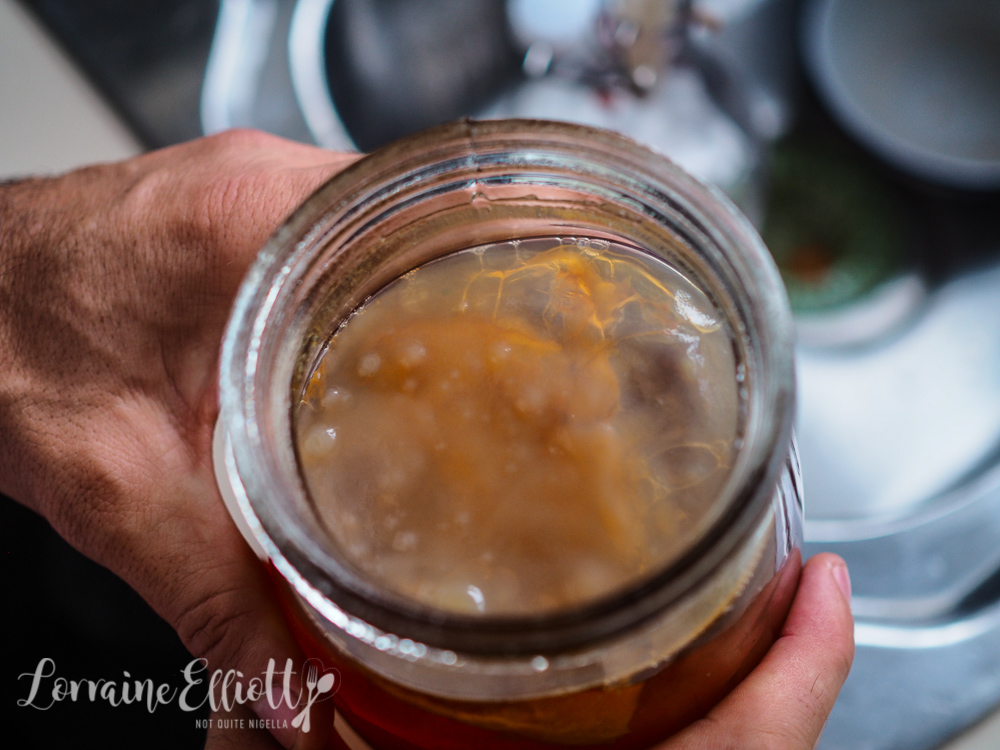 Step 2 - After 7 days, place around 3 tablespoons of fruit in an airtight glass bottle. Add some kombucha brew to it (don't add the pellicle) and close it securely. Let it sit at room temperature for 1-2 days. If it looks very fizzy "burp" (aka open it) after 1 day and do this over the sink in case if fizzes. Ours never over fizzed or exploded by JY did have one that fizzed everywhere.