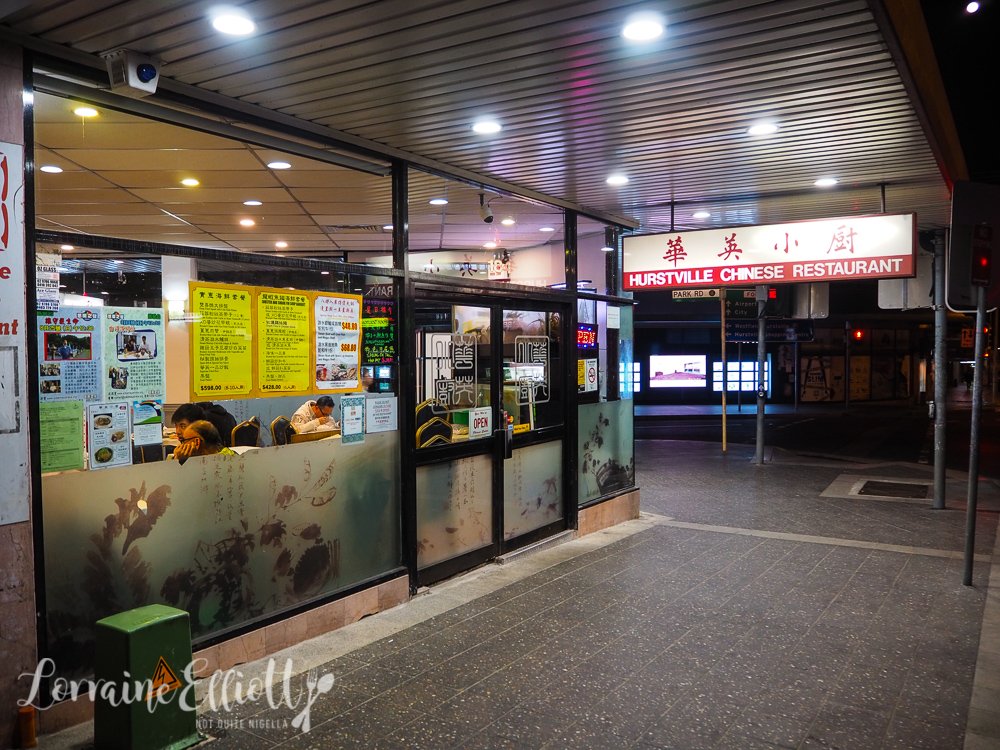 Hurstville Chinese restaurant is located on Forest Road and serves up Cantonese Chinese seafood. It would also be the location of Mr NQN's birthday dinner with my family as well as a new "adopted" member of the family.

It started with a conversation about seafood between Laura and I. She declared that crab was the fairest of all seafoods. I asked if she had ever tried a Chinese style crab with XO sauce and noodles. It's one of those treats you tend to get on special occasions or on birthdays if you're part of a Chinese family. "You should come with us one day," I suggested. "When are you going next?" she asked. "This Saturday," I replied. Saturday it was! 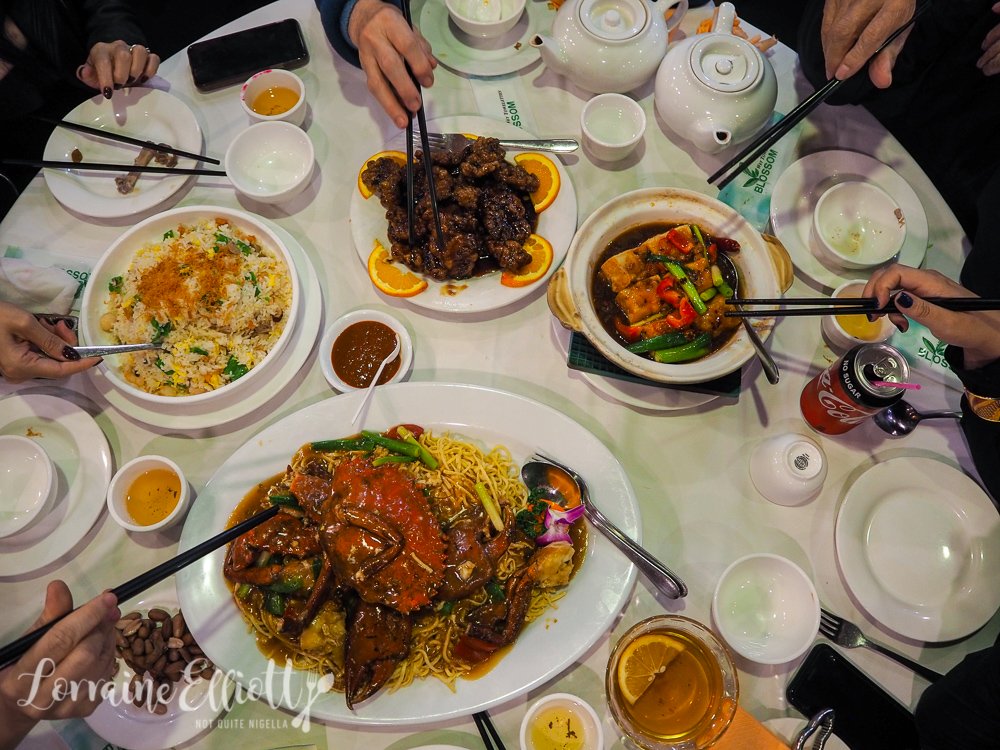 Laura would be our first non-family guest at a Chinese seafood dinner. My family are introverts, my father is quite deaf and my mother isn't great at small talk nor is my sister Blythe who was home from London (they'll answer questions but will never enquire about you). How would they all react to extroverted Laura?

Mr NQN picks up my parents and sister in our car while Laura and I drive to Hurstville together. She wanted to make a good impression so I told her, "Make sure you're on time, my family are sticklers for being on time." We arrive and we're the first there. Phew! 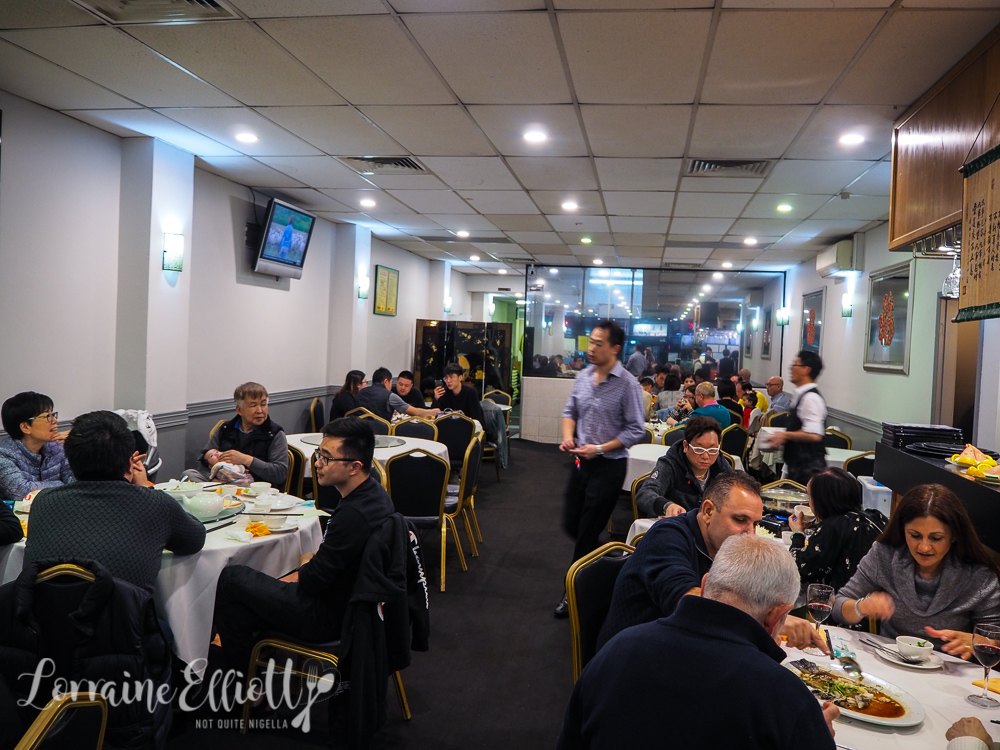 "I'm the only white person here," Laura says looking around. "Even you're too white for this place!" she whispers. What she means is that Hurstville Chinese restaurant is a very low key restaurant with mostly Chinese clientele (a non Asian group enters later). 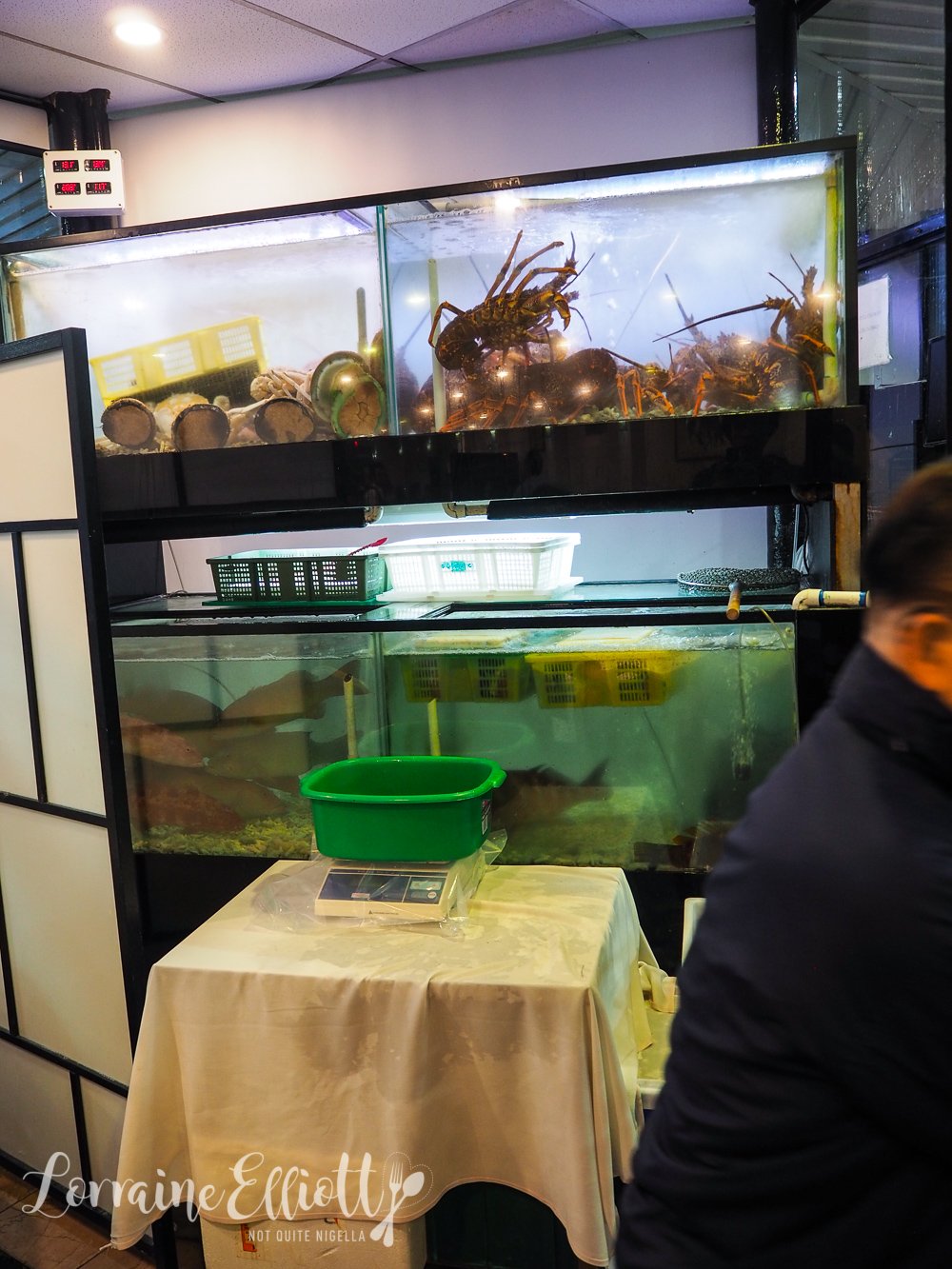 There's a grown man having dinner with his family while wearing headphones and watching something on his phone and they're vaccuming and dragging chairs along the carpet back and forth mid-service. There's also a lobster tank that is packed with lobsters (a "lobster share house" according to Laura). It's very down to earth and not for the fancy types. 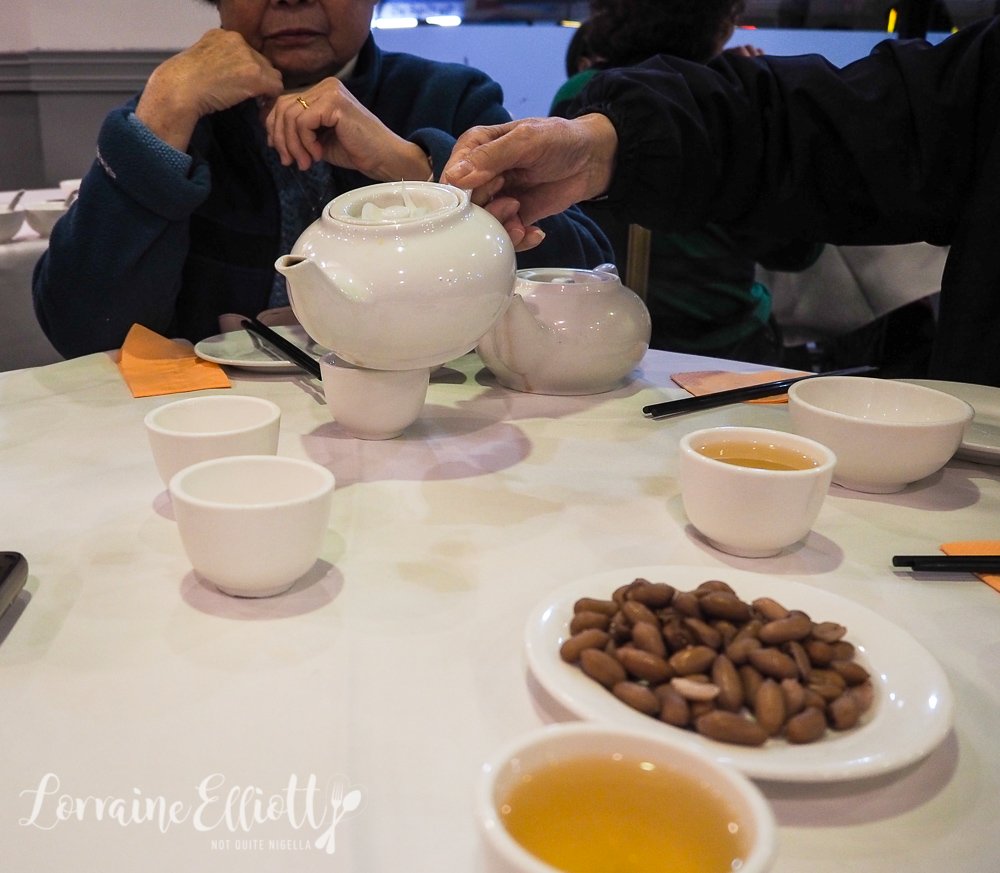 My family and Mr NQN arrive about 5 minutes later. I explain how crab is Laura's favourite food and how much she is looking forward to it. Laura is a vegetarian that does actually dabble in meat on occasion. She will eat duck and chicken skin but not the meat as it is the flavour and texture of meat that she dislikes. The only thing that is a hard no for her is capsicum which she is deathly allergic to (and she carries an epi pen for). "Do you want Coke?" my sister asks Laura and Mr NQN pointedly before ordering one herself.

We are given the English menu but this is a briefer version of the Chinese menu. There's no vegetable section and when we ask for a recommendation for a hot pot our waiter cites one with tofu but realises that it isn't actually on the English menu, it's a Chinese menu item only. 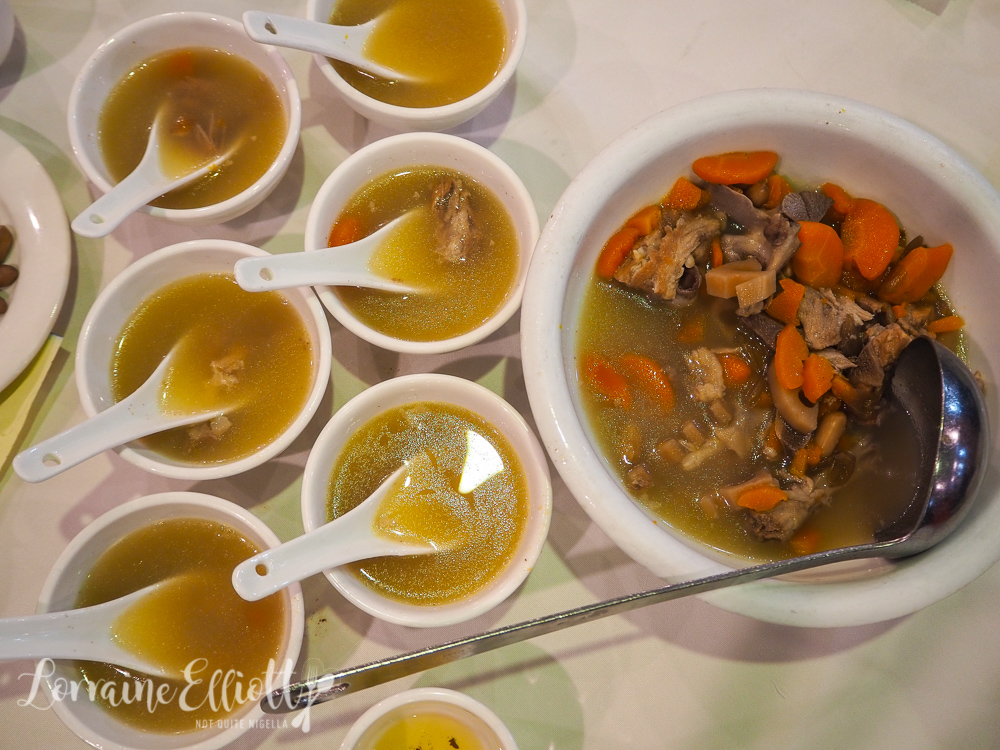 He brings us boiled peanuts that are soft and taste like they have been poached in a spiced stock with star anise and other Asian spices. My father pours the tea because that's what he always does and we teach Laura how to say thank you for the tea (tap your forefinger and middle finger on the table twice). The food takes a while to arrive-the restaurant is packed and I can see that they're busy but it's an unusually long wait.

Usually you get a tureen of complimentary broth to tide you over until the crab arrives. There is no soup and we have to ask for it. "We cursed you because we threw them off because we're white," says Laura. They bring it over shortly and it is a broth made of pork bones, lotus root and carrots and it takes the edge off the hunger. 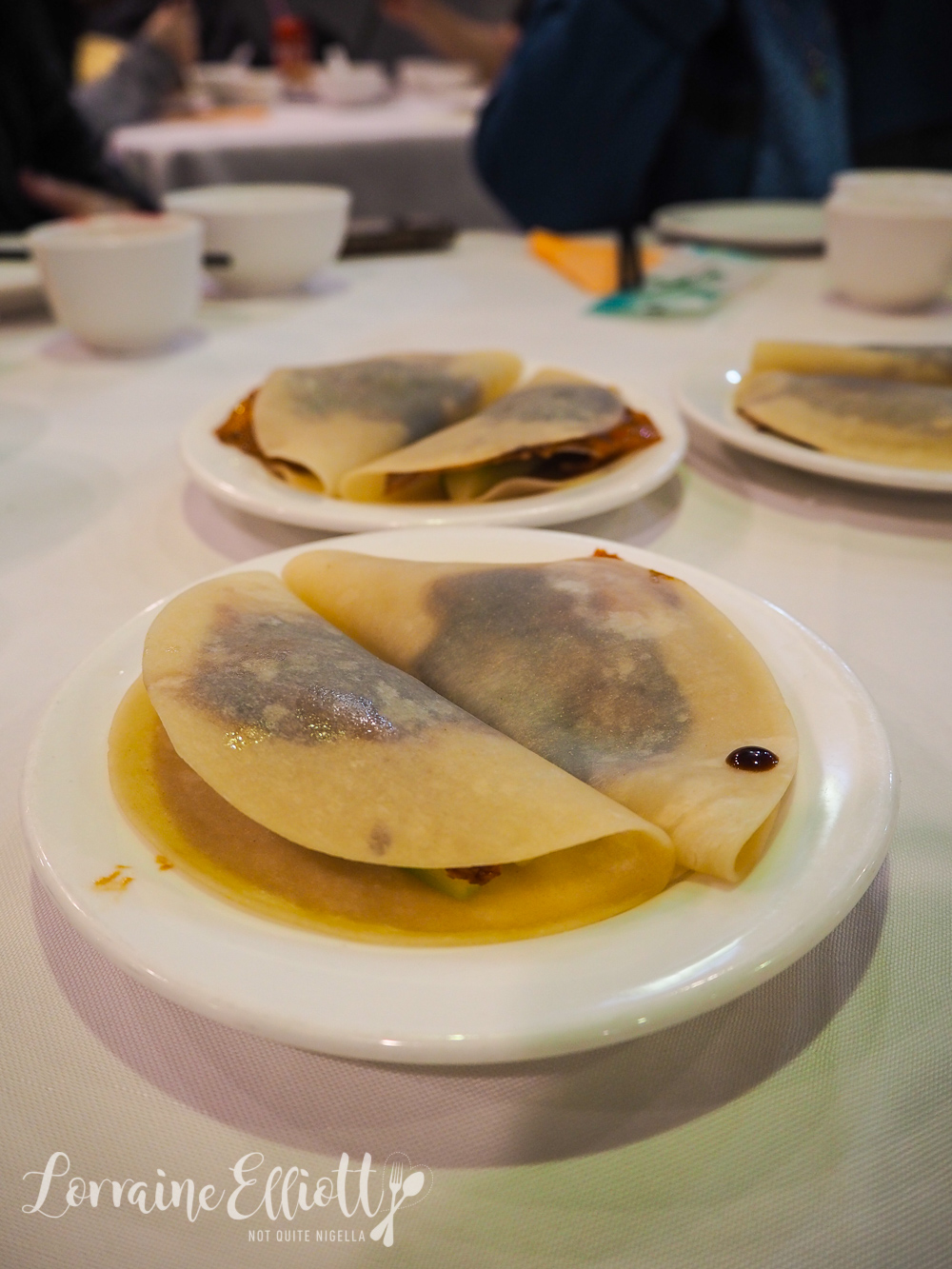 The first course is the duck pancake and they bring out 6 plates with 2 pancakes each. We tuck in hungrily. It's mostly skin which I love with a minimal amount of meat, some spring onion and hoi sin sauce. 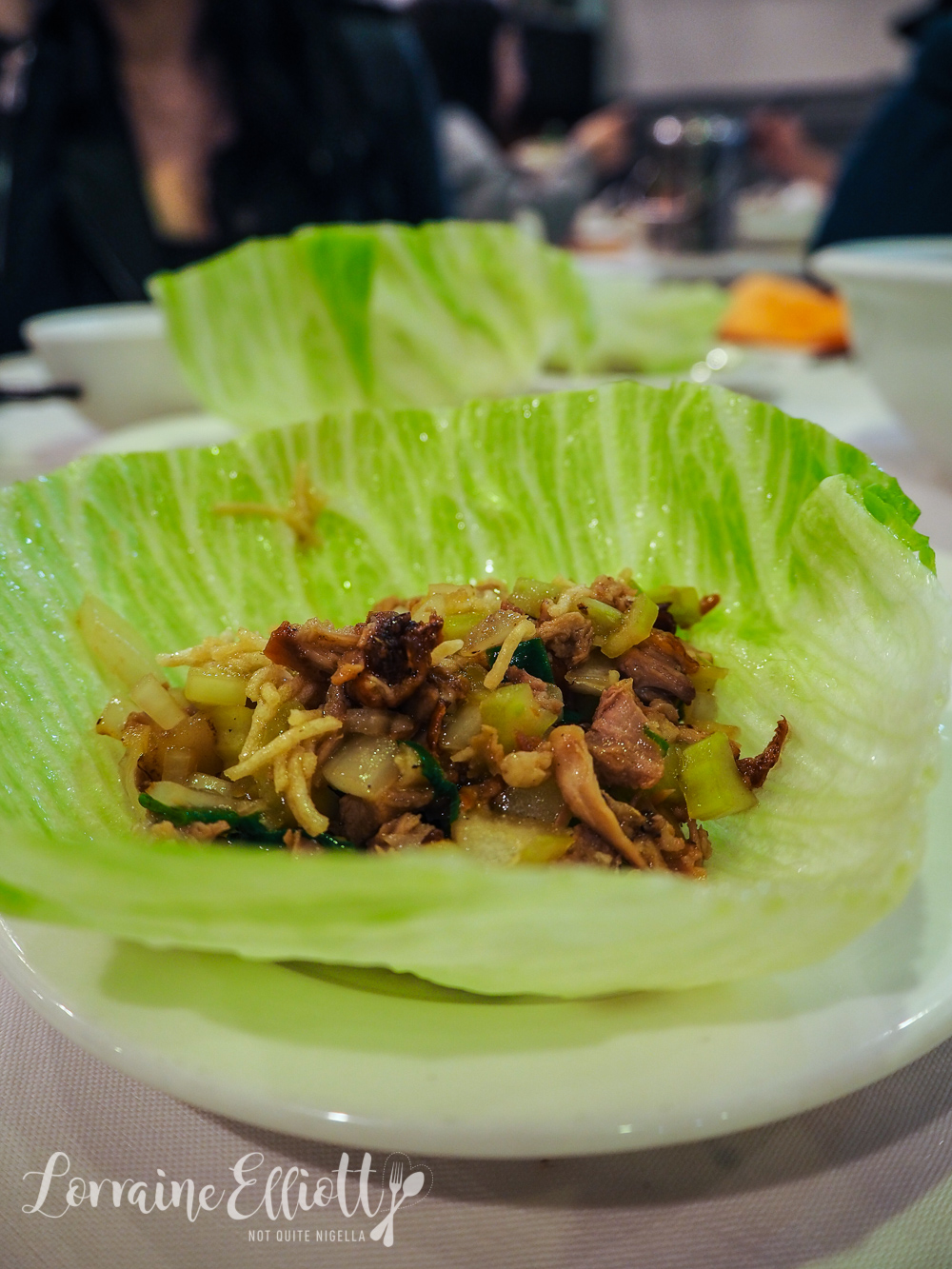 The lettuce cups course arrives with one lettuce bowl per person. I like mine with a bit more crunch and flavour to it and it's a bit on the mild side so I give mine to Mr NQN (no need to waste calories or stomach space!).

There's another big gap before the next dishes arrive and we swear that they've forgotten about us. Other tables around us get their dishes. I know that they've put the order for the crab in because they showed us the crab but it hasn't materialised. We pick at the pork bones, sip the soup and eat the vegetables. "I'm SOOO ready for this crab," Laura says excitedly. 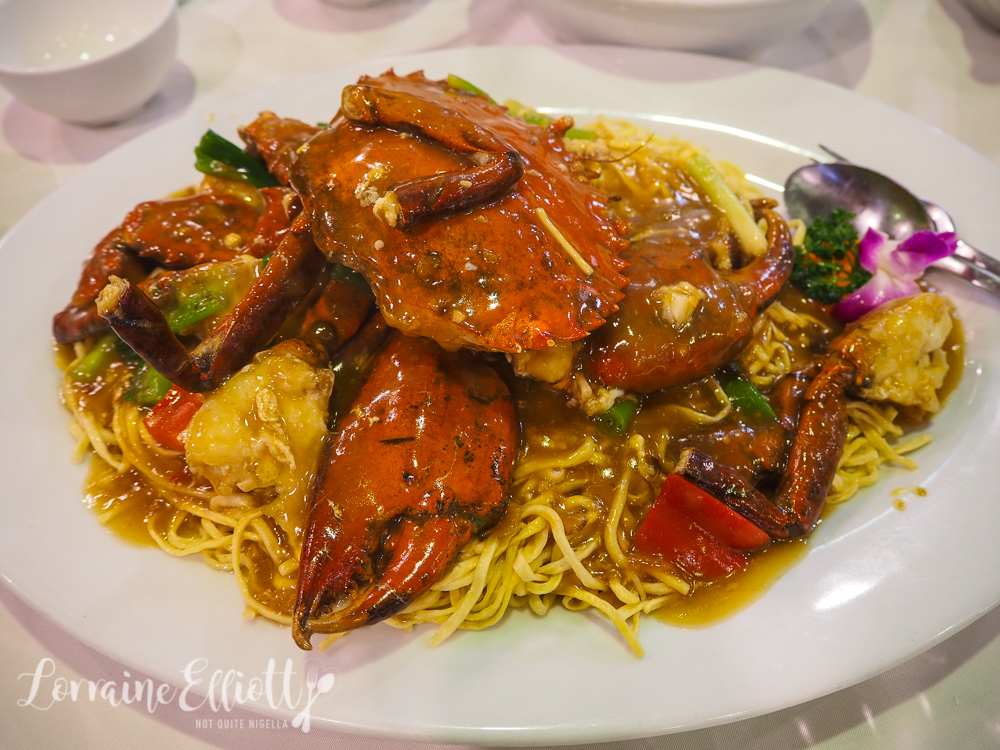 And then the crab arrives with a double serve of noodles. "OMG..." Laura says and she points at the crab. On it are large chunks of capsicum. "Um whaaat?" I say peering closer. In the 50 or so times we've ordered this dish there has never been capsicum. Even the waiter stares at it saying "There's usually no capsicum on this." My heart sinks for poor Laura who has been waiting to eat this dish all week and has posted about it on social media and told friends. All to be undone by one addition. 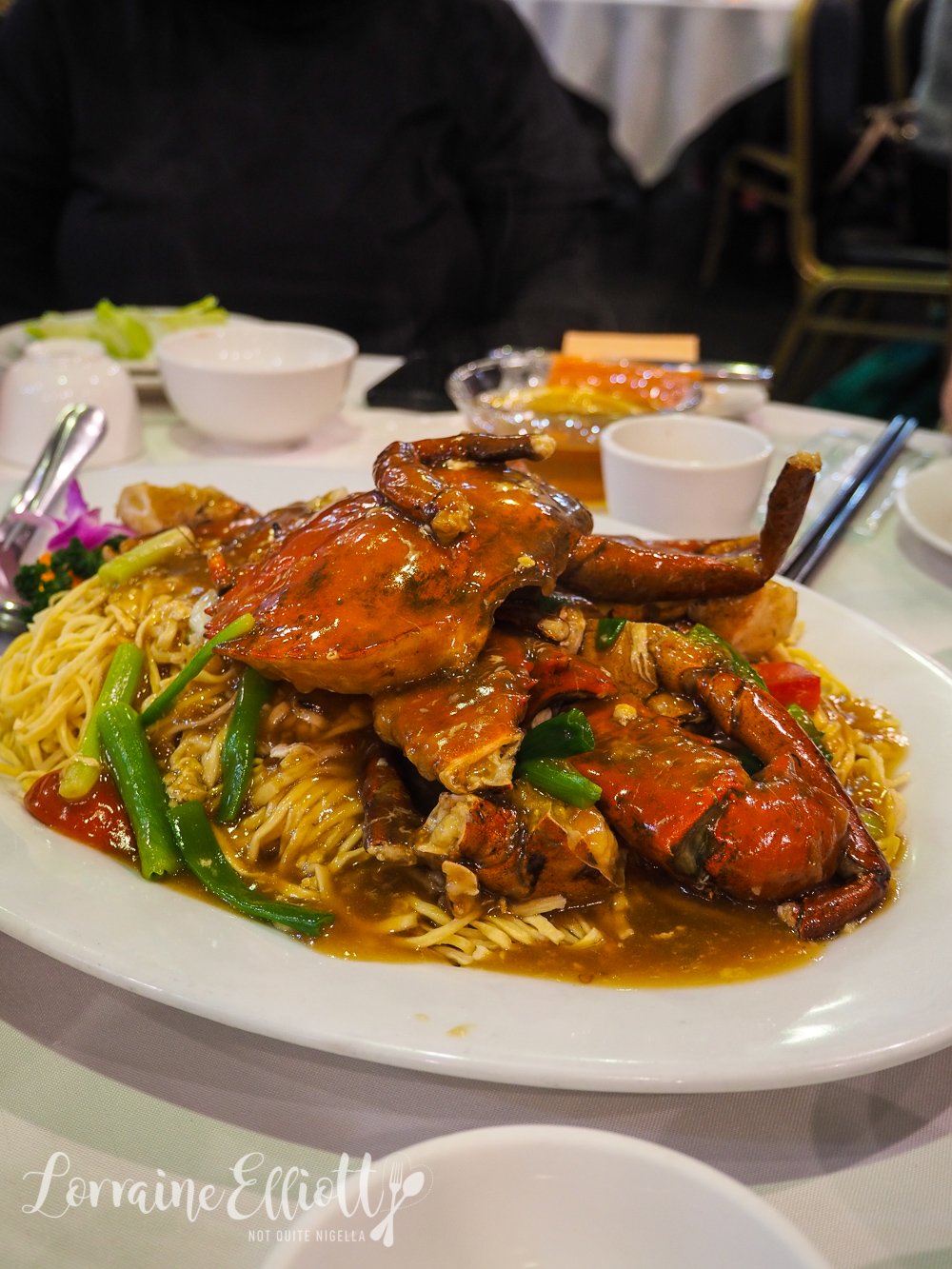 She is pragmatic about it, "I should have told them," she says staring at the glistening crab dejectedly. In a moment of madness she contemplates eating a piece and epi-penning herself such is her disappointment but thinks better of it because allergies are not to be trifled with. 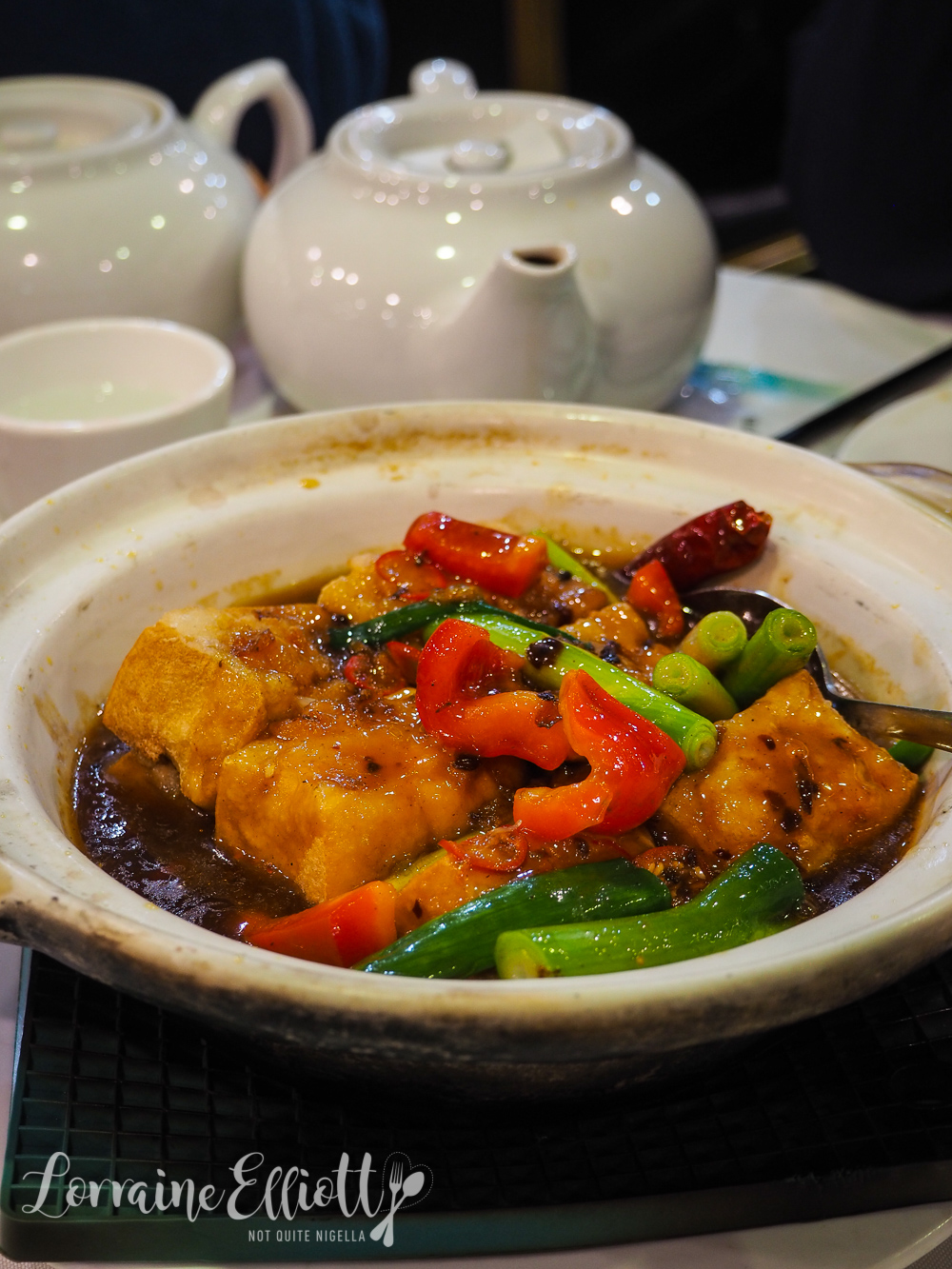 Then the next dish arrives, a hot pot that wasn't on the English menu of tofu puffs and numbing chilli and it's also covered in capsicum. At this arrival the whole table moans on behalf of Laura (except my dad who couldn't hear much of anything) and we quickly try and rectify the situation by ordering a whole steamed fish with ginger, shallots and "NO CAPSICUM PLEASE". And really the crab wasn't as amazing as we wanted it to be. It was pleasant but wasn't gutsy or packed a punch and the noodles were really, really soft. We would have loved more sauce on these. 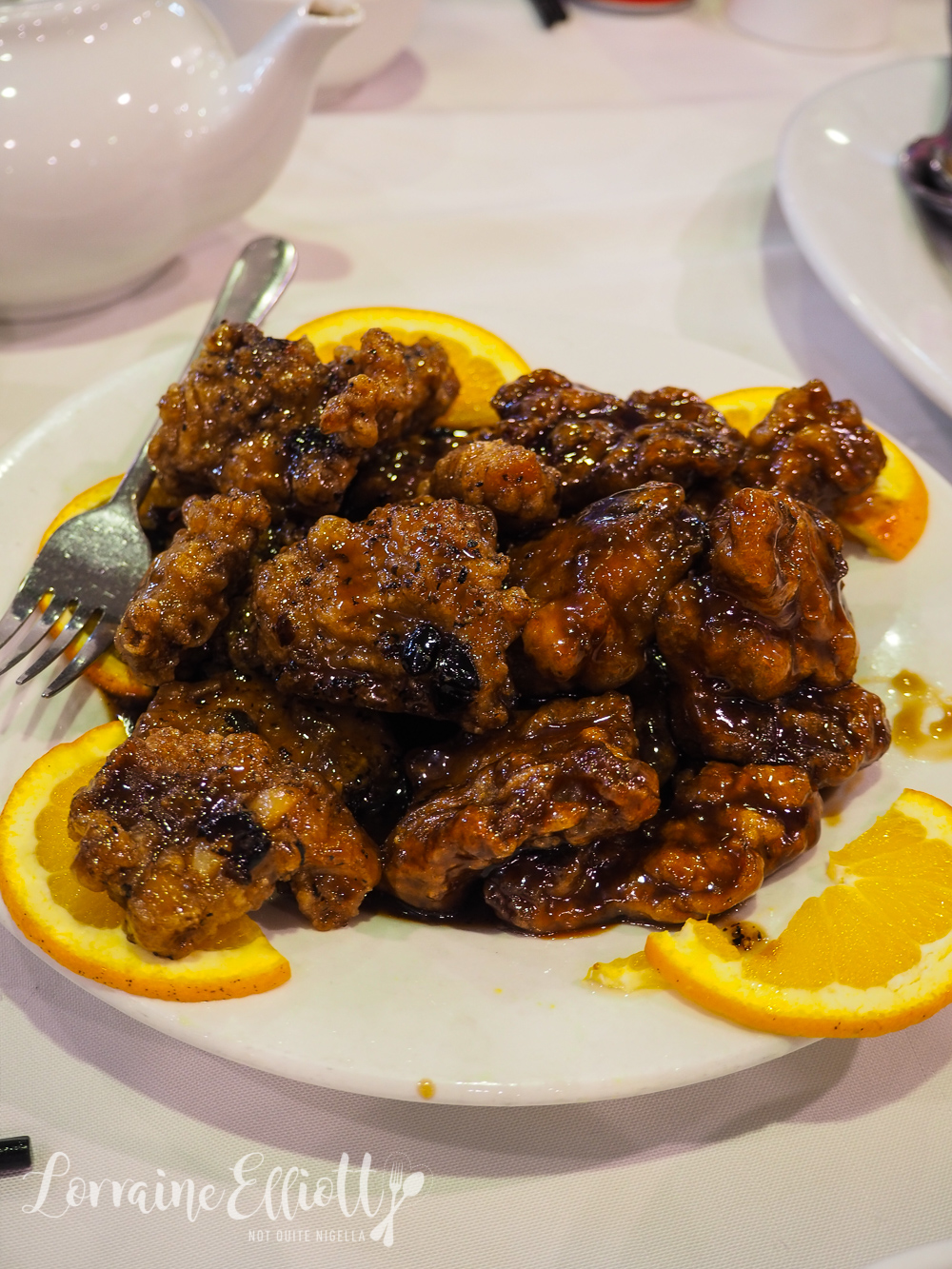 The standout dish is an unexpected one that we ordered last minute because I adore black pepper (yes, odd I know). The pork spare ribs with vinegar and black pepper are a perfect balance of rich and fatty pork, tangy vinegar and spicy black pepper. We give Laura lots of pieces of these even though she is a sometime vegetarian she actually really likes them as they're not too meaty in flavour, it's more about the crust and the sauce. 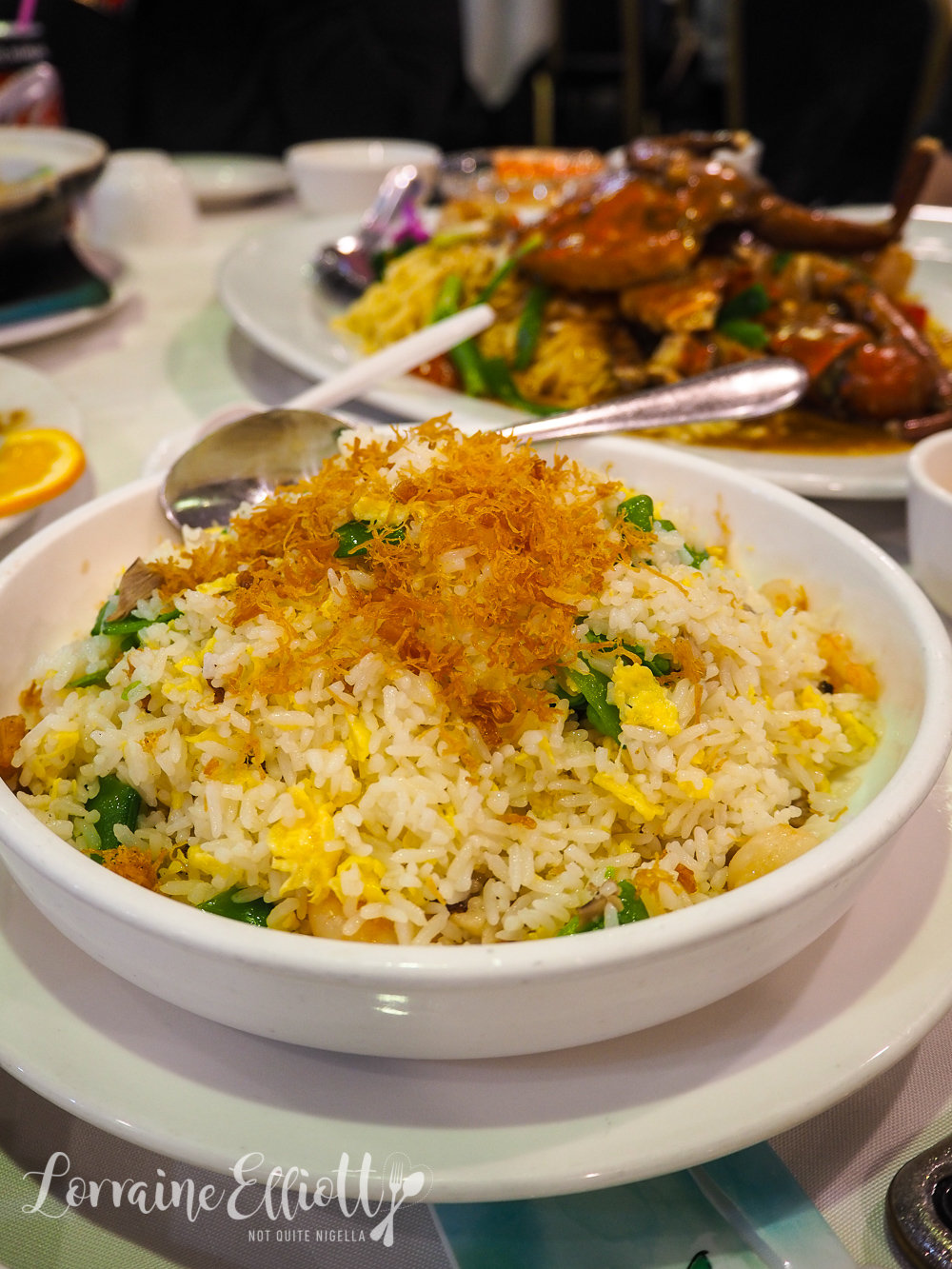 Sometimes we are the people that order something for the name. And the "Famous Supreme Fried Rice" was one of them. I think the name built this up a lot because it is actually just like a regular tasting fried rice with some shredded dried scallops on top; if anything it's really, really mild in flavour. I'm not sure how famous it is or why and when Laura asks me what it's like I call it "Gwyneth Paltrow interesting". She responds "It's the Gwyneth Paltrow of rice. It's famous but nobody knows why". 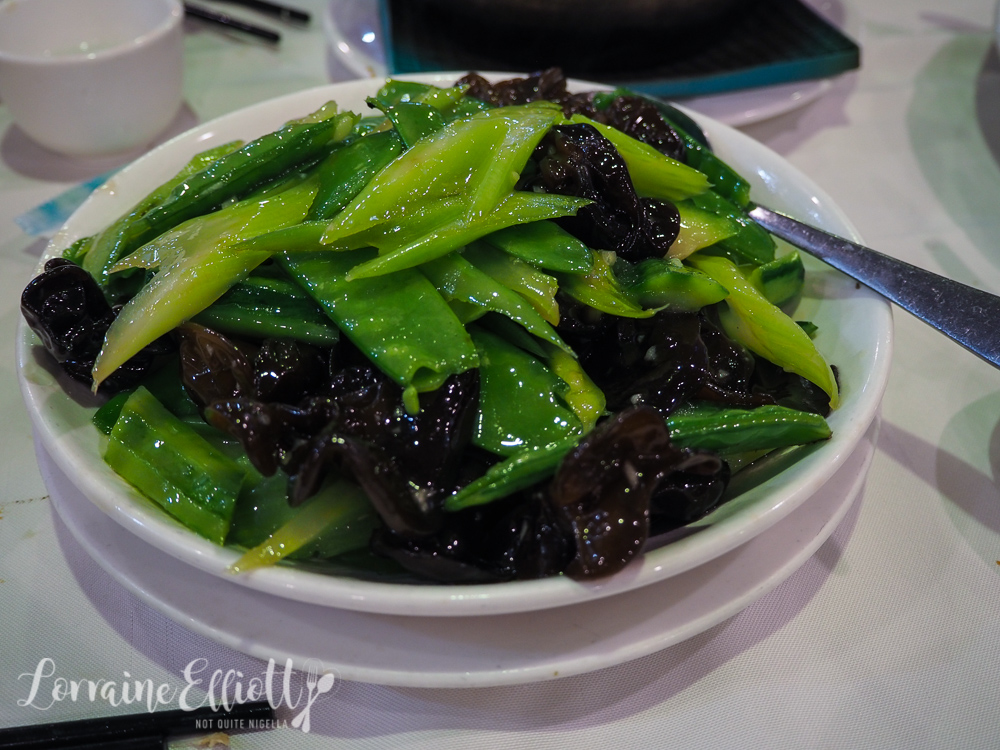 The vegetables arrive some time later too. I think the kitchen has some sort of issue with timing. However they're actually really good with a nice crunch to them. There's snow peas, black fungus mushrooms, celery and zucchini. 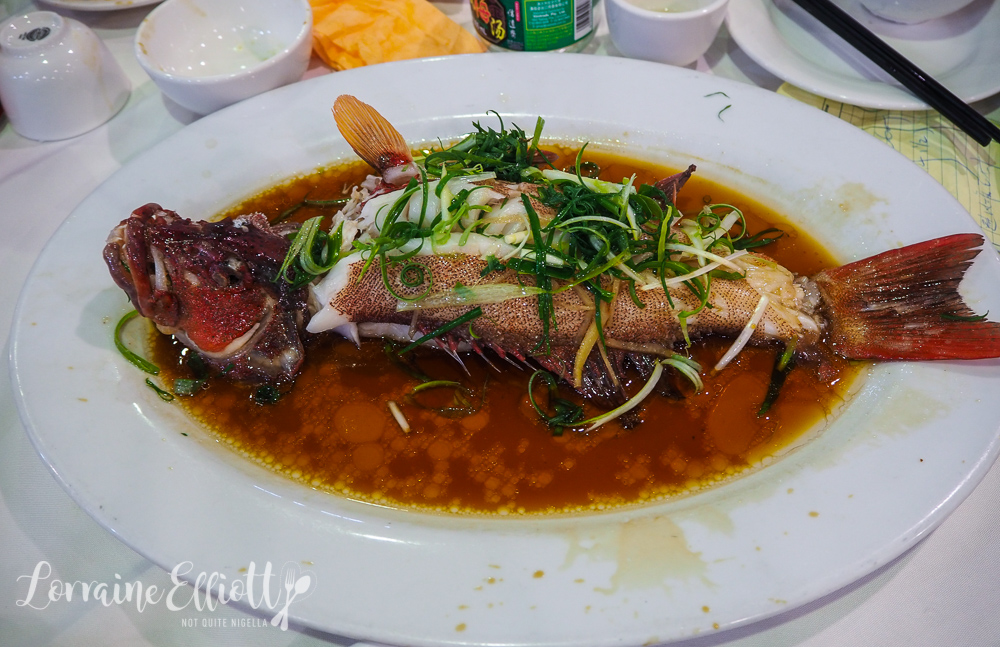 There's another huge gap for the fish. "Where did the fish go?" asks Laura. I mean we last saw him an hour ago and he was on his way to the kitchen flipping in the plastic bag. Comically, the waiter walks past us, sees our fish-less table and does a double take and then rushes back to the kitchen before coming out and saying "10 minutes!". 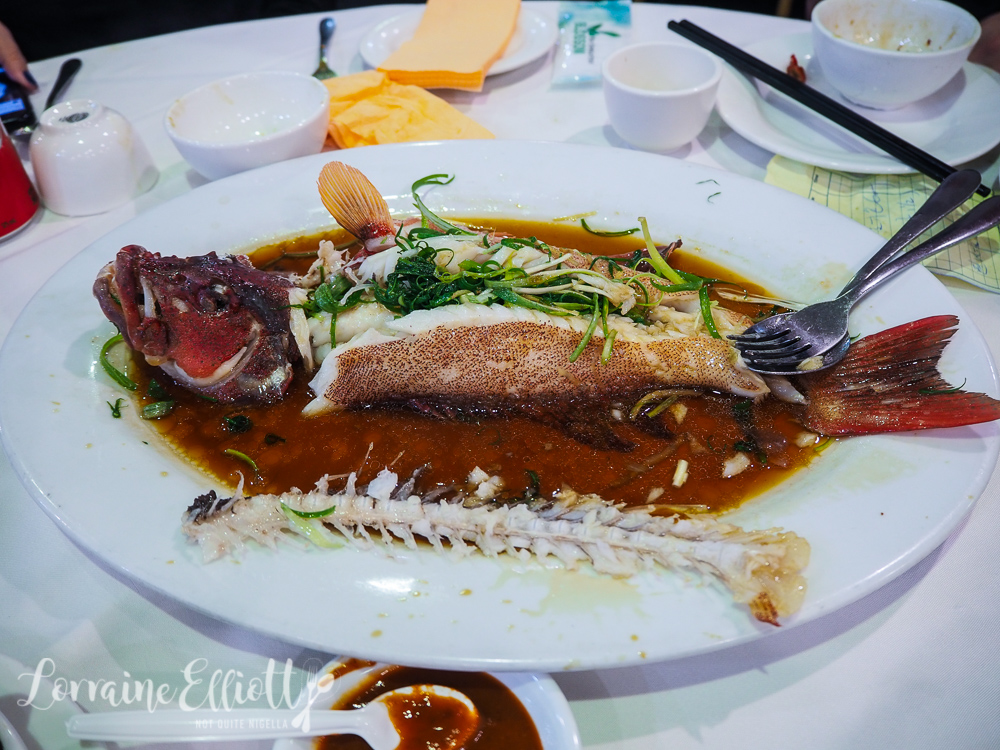 20 minutes later the fish arrives. They fillet it up in front of us and then put it back together on the platter. We tuck in. Oh it's delicious, just so delicious. It's much better than the crab and it's juicy and moist with an excellent flavour to it and perfectly seasoned. 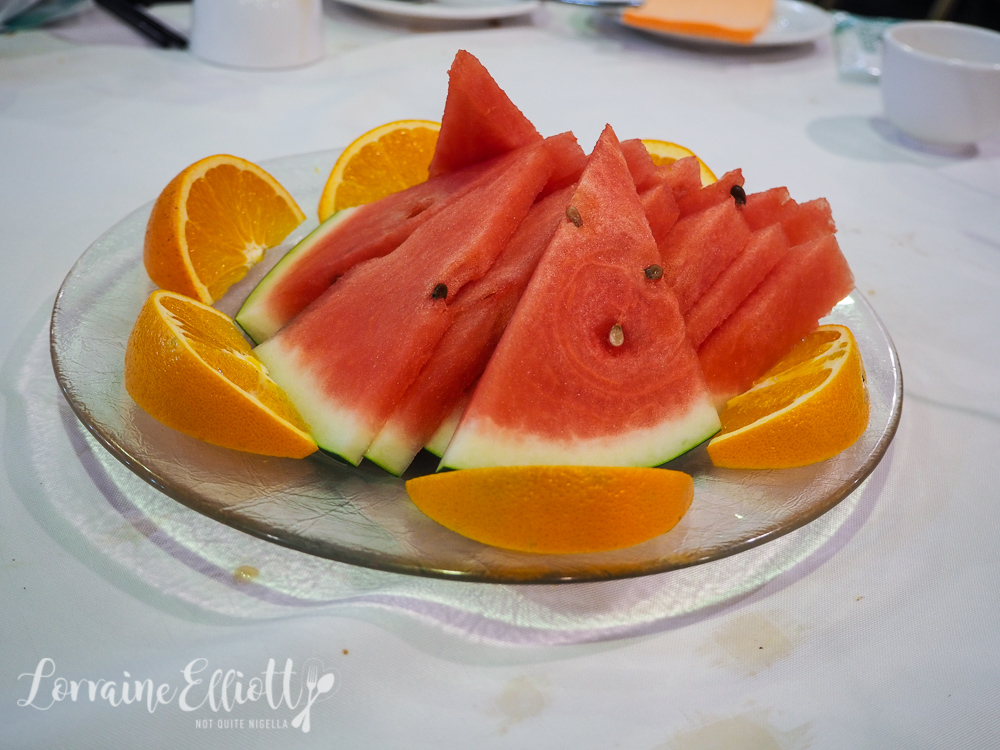 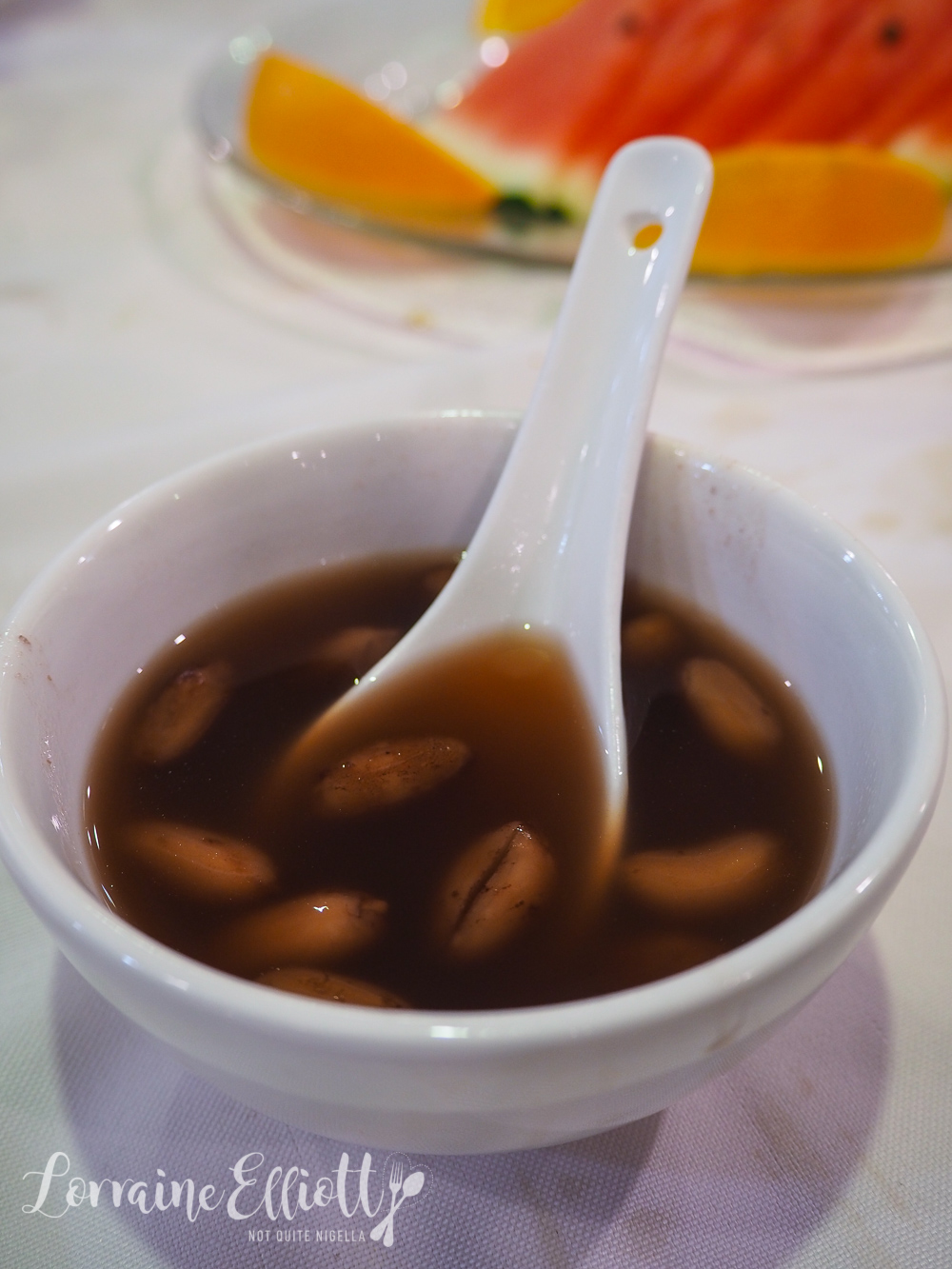 We finish off with sweet peanut soup and slices of fruit. The restaurant manager is lovely and tell us that the drinks have been taken off the bill as were the noodles. And if anything, it's an excuse so Laura can come to the next dinner!

So tell me Dear Reader, are you aware of calorie wastage? Have you had any situations with allergies? Have they ever forgotten your order?