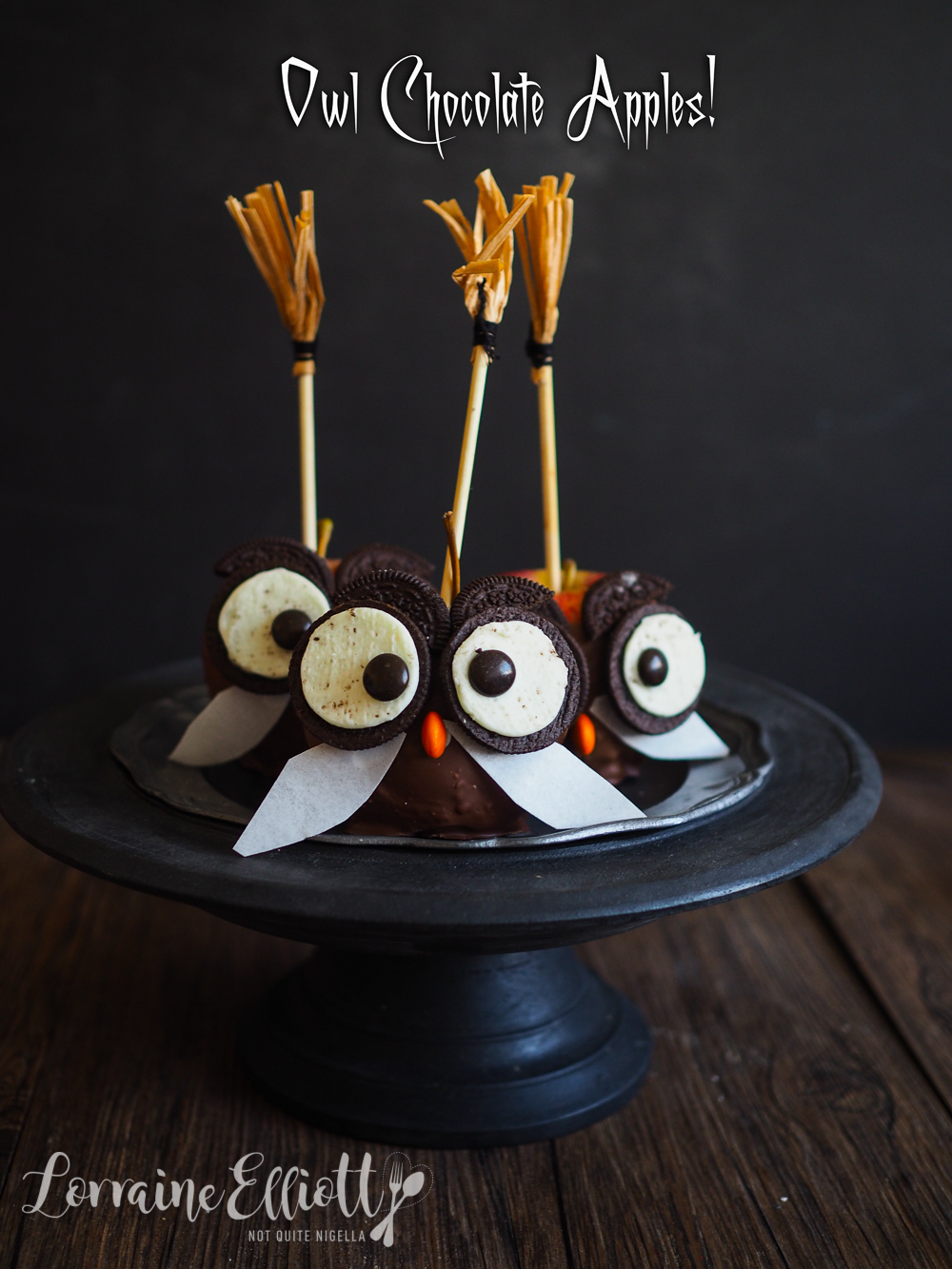 Happy Hallowe'en everyone! Do you need a quick Hallowe'en recipe idea? This is barely a recipe yet it's so effectively cute and perfect for Halloween! Crisp apples are dipped in melted chocolate and then decorated with Oreos for owl eyes and m&ms for a nose with rice paper wings! Say hoot!!

These were originally intended to be caramel apples because I happen to love them but I had a massive fail with a Seriouseats/Bravetart recipe for them. Luckily I had bought quite a few apples for this so I had some leftovers.

This chocolate version came together really quickly. I love recipes that pay off with effort vs effect and these really were darling little Halloween treats. If anything they're too cute to eat! 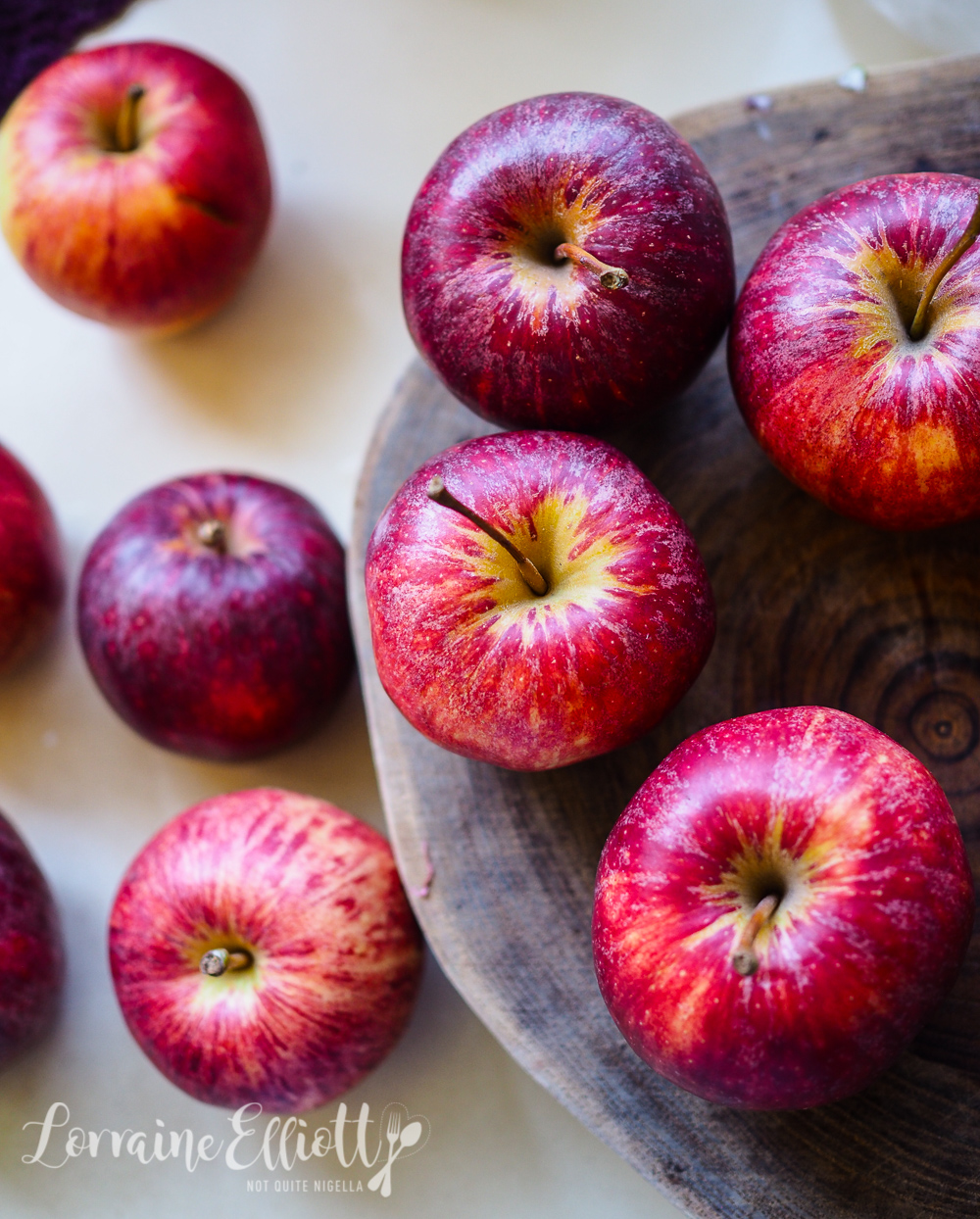 Speaking of Halloween, Henry the horrible ogre head of our strata committee met Teddy for the first time the other day. You may remember that he refused to allow us permission to have Mochi. We didn't care as she wasn't a bother to anyone and neither is Teddy so we ignored it and kept adopting dogs because Henry is someone that likes saying no to everyone and having power over others. He is also retired so he has plenty of time to write essay length emails to the strata committee.

One day we were coming back from walking Teddy and Henry appeared. The sky darkened and black clouds emerged (okay that last bit was made up). I hate bumping into Henry and we knew that he hadn't seen Teddy before.

"Here doggy doggy," he said and he started moving towards Teddy. It wasn't a normal interaction with a dog where you might hold out your hand for them to sniff and then pet them. He was trying to shove his hands into Teddy's mouth and flicking his fingers around his face as if he were trying to get Teddy to bite him. Henry is truly a horrible individual who would no doubt complain if he was bitten to get a dog put down. He also put a dog poo in our letterbox one day after I ignored him but that's another story.

However Henry didn't count on Teddy being the most amiable dog ever. Teddy simply said hello and remained calm the whole time, even when Henry's fingers were flicking him in his face. Unfortunately for Henry, Teddy is very happy and friendly and when he goes to the dog park he will say hello to every single person and dog. All I could think was that it was lucky it wasn't Mochi because that sweet little girl had some really good creep instincts about her and would have not tolerated it and would have growled at him!

So tell me Dear Reader, do you have any toxic individuals that you have to deal with in your life? How do you deal with them? Are you celebrating Halloween today? 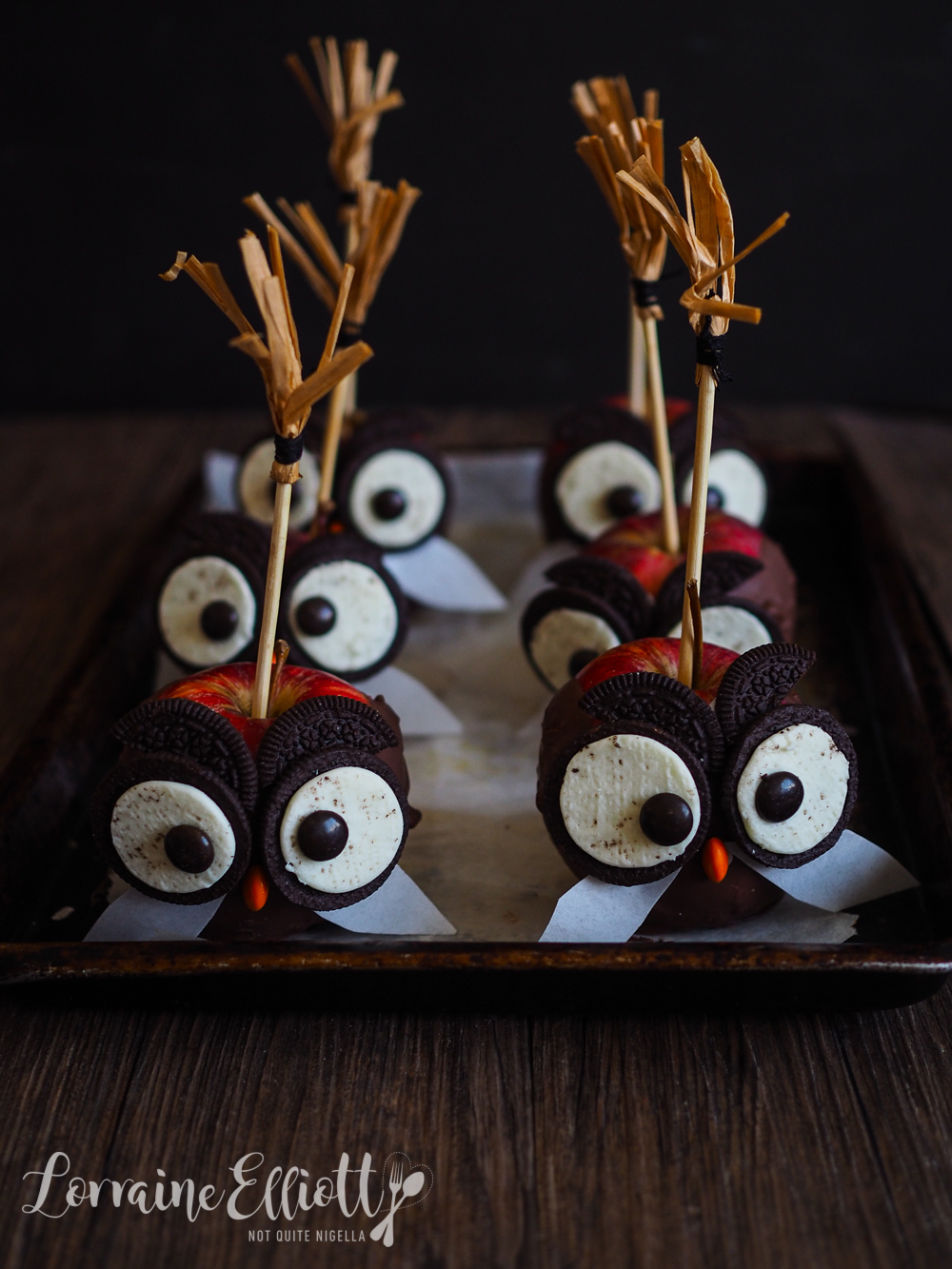 Step 1 - Have a large tray lined with parchment ready. Melt the chocolate in a microwave or a double boiler. Stick a chopstick or a wooden stick in the top of each apple and dip the apples in the chocolate allowing excess to drip off and place on the parchment. 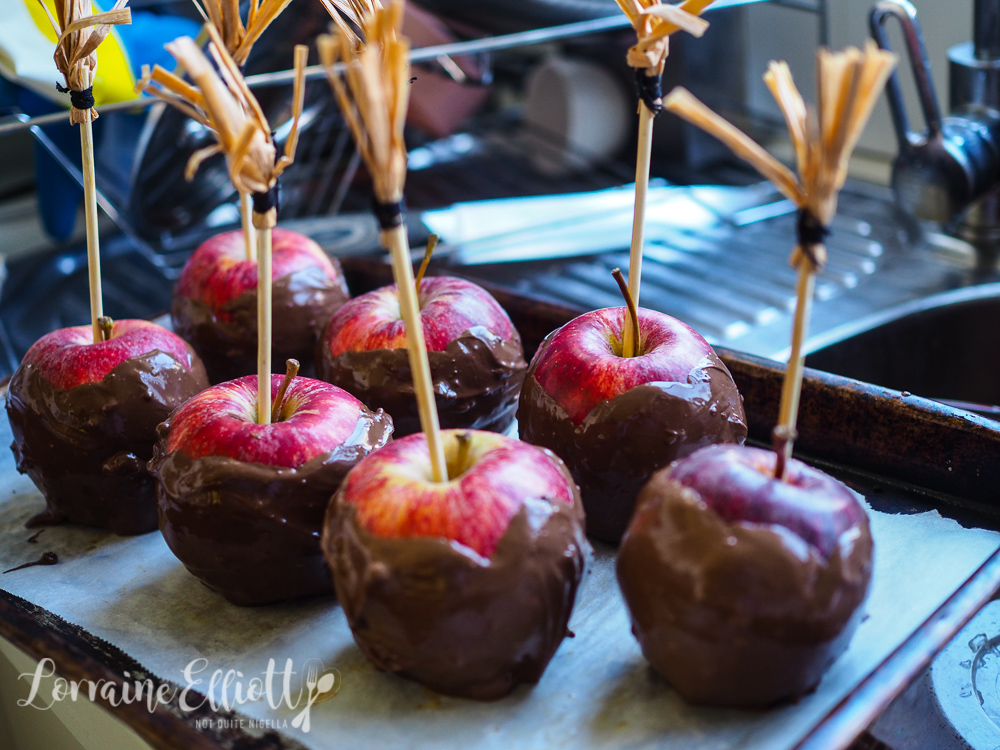 Step 2 - While they are setting prep the eyes, nose and wings. Take the Oreos and gently pry them apart. Place one brown m&m on each eye until you have 12 pairs of eyes. Cut each remaining cookie without the icing in half to make eyebrows. Then cut the orange m&m's in half. Cut out the rice paper into small leaf shapes like wings making 12 pairs. 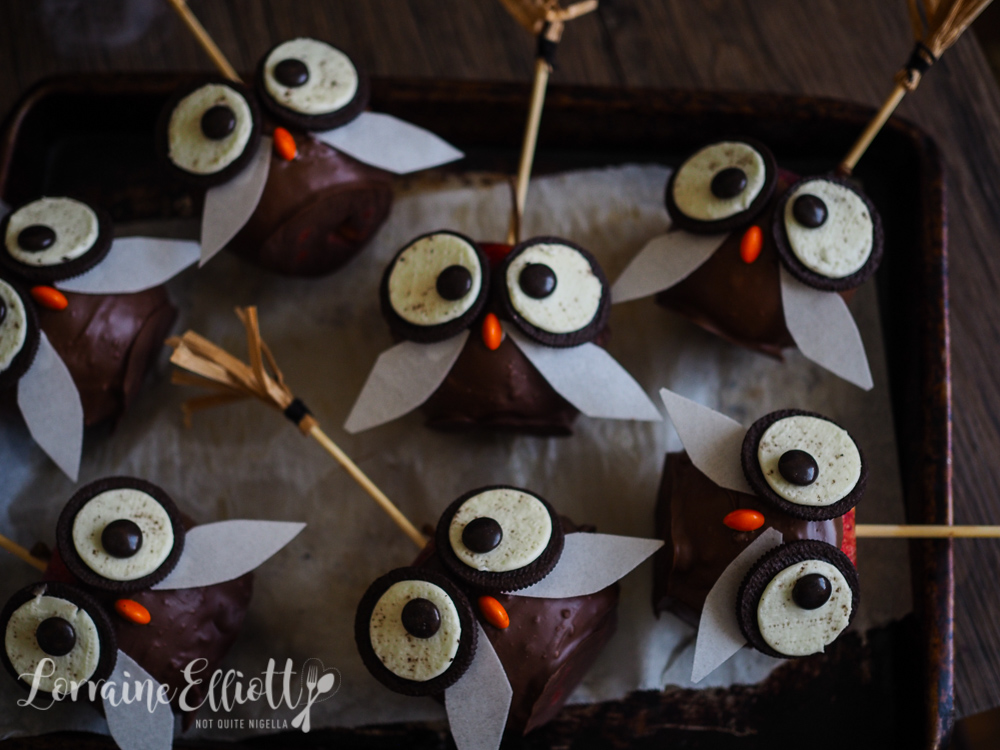 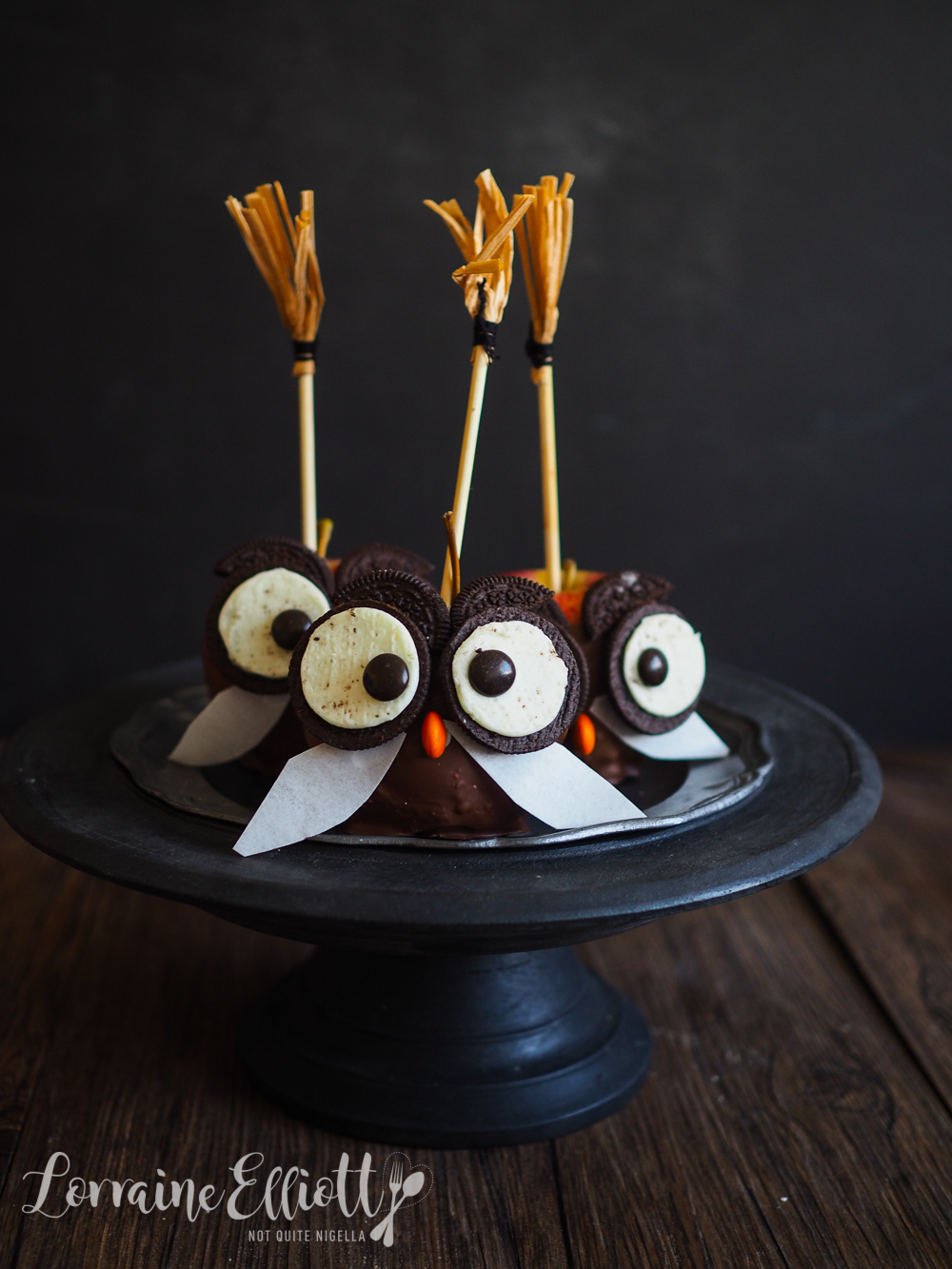