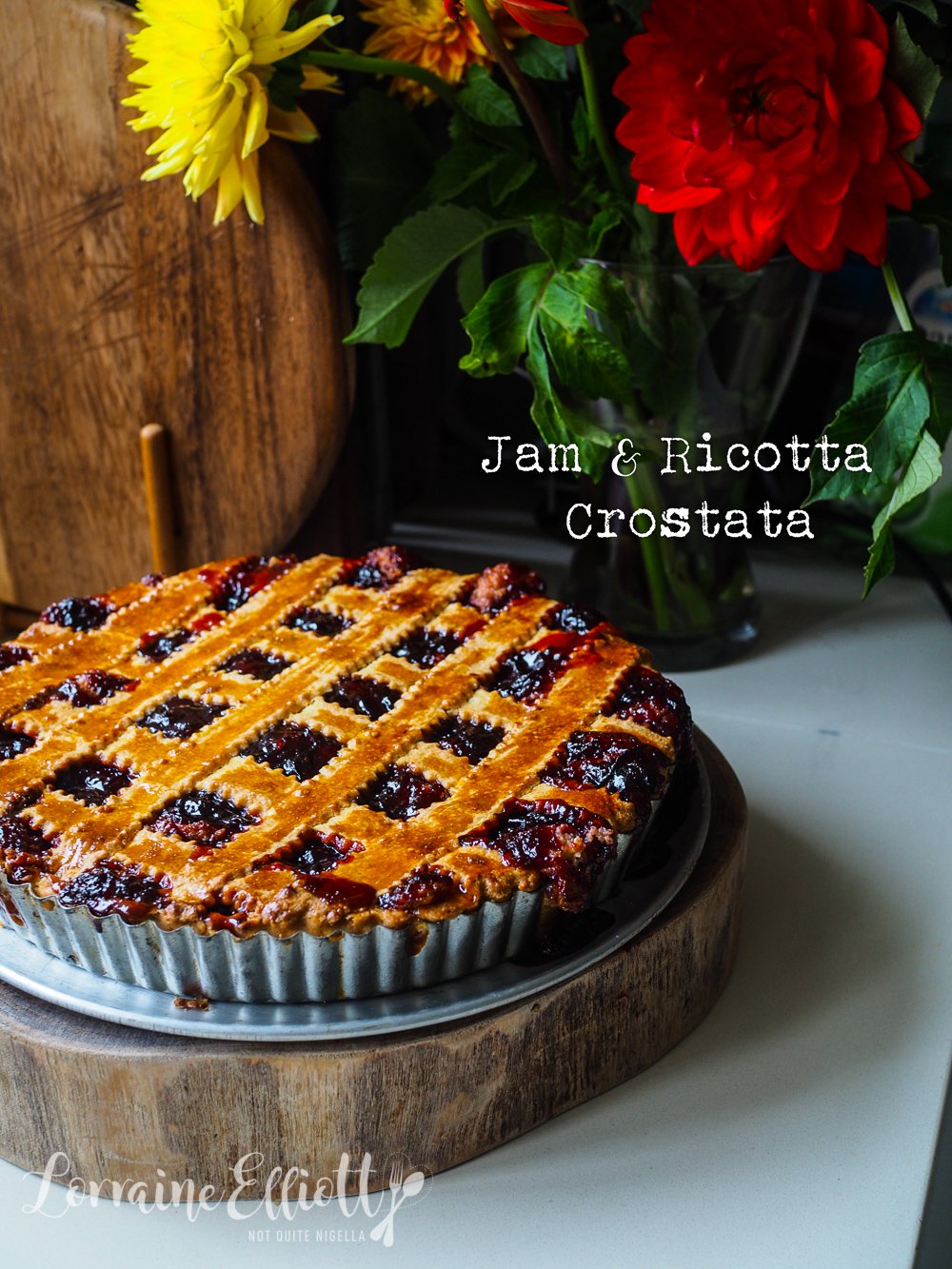 Got some delicious jam you want to use up? This jam and ricotta crostata is Italy in a slice. With a buttery base, ricotta cheesecake filling (inspired by the famous one by Papa's Pasticceria) and a homemade plum jam topping, this criss cross beauty is perfect for a morning or afternoon tea yet is pretty enough for a special occasion.

Crostata is an Italian tart made with pastafrolla which is a sweet, rich butter and egg dough. The best crostata dough I've found doesn't roll that well and softens in less than 5 minutes (shorter if the weather is very warm). 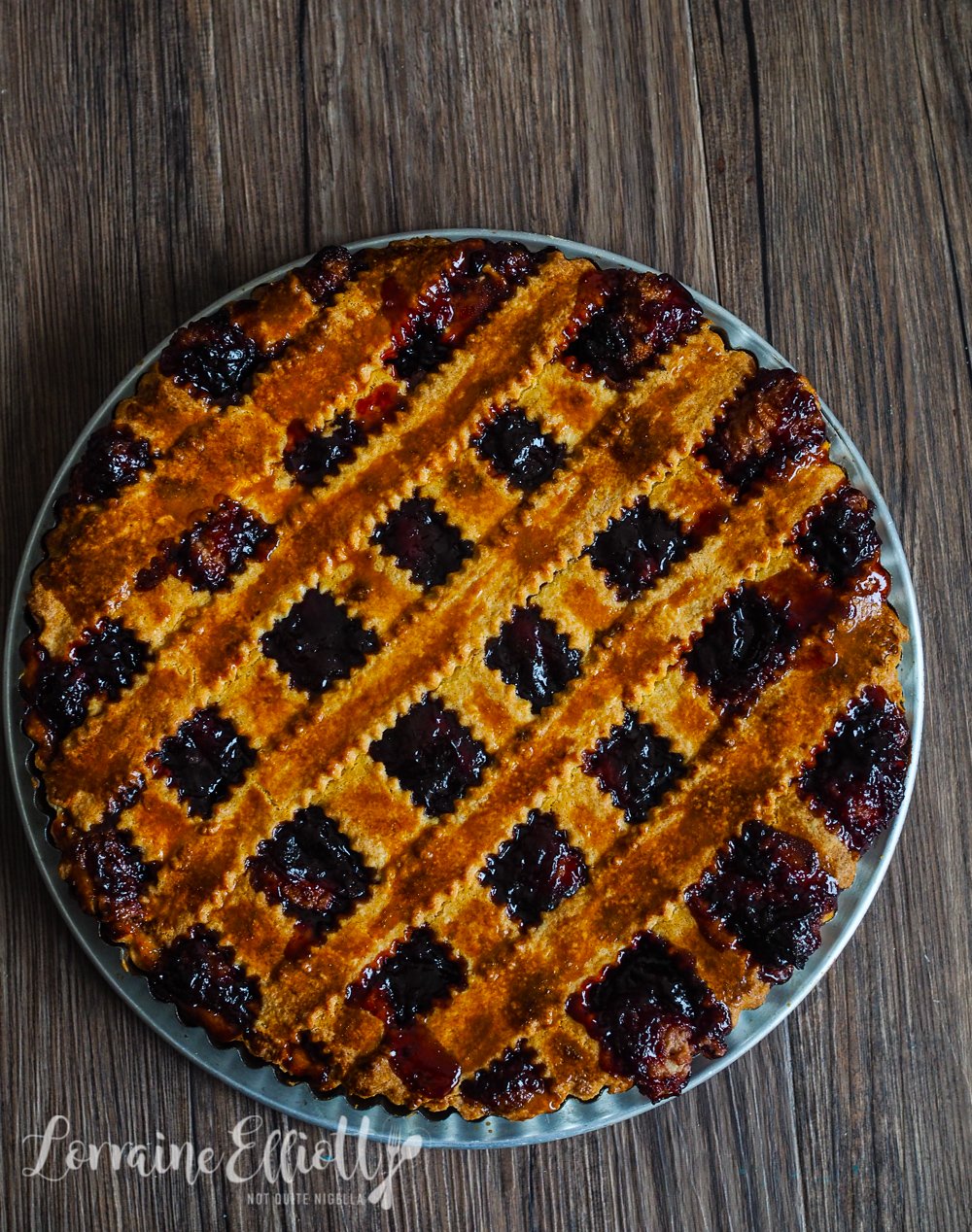 It was a 23°C/73.4°F day when I made the pastry and it was soft within 5 minutes. It's best pressed into a tart tin. it's commonly made with jam as a filling but can also be savoury. I love the classic crostata look with the ravioli cutter trimmed cross top. I remember buying a slice in Testaccio in Rome for the flight home and savouring the blackberry jam. 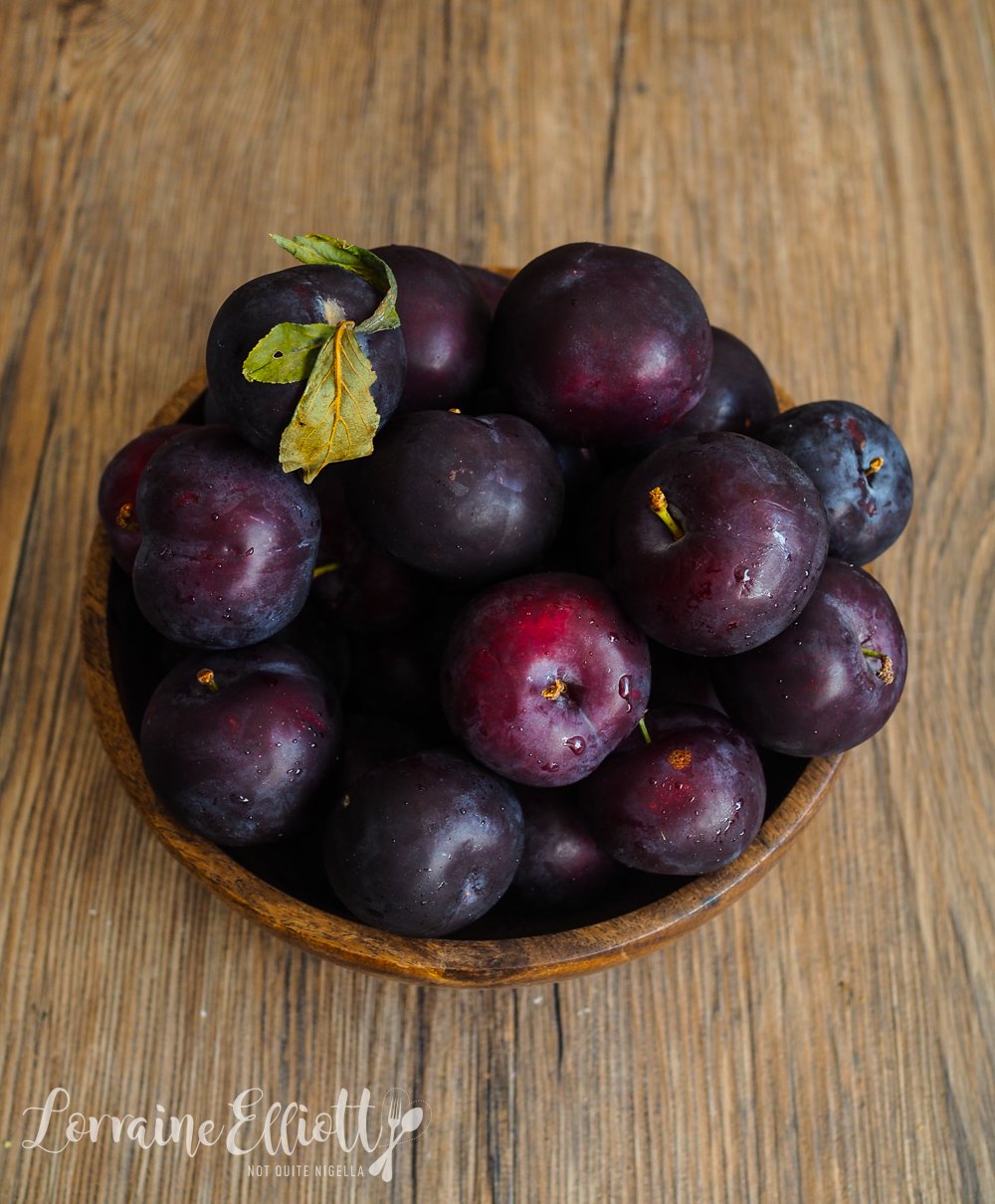 Plum jam is one of the best things to make if you're new to jamming. You don't need any pectin or lemon zest or seeds. It's mostly time and patience.

This story has taken me a long time to share because this year I've been going through some things that made me question my own toughness and resilience. This jam crostata was made back in February this year when plums were aplenty and it took me 4 days to make as it fell in the period of my darling sweetheart Mochi's passing. I made the jam for the filling on Monday and that evening at 11pm we rushed her to the vet hospital where she passed away at 2:52am. 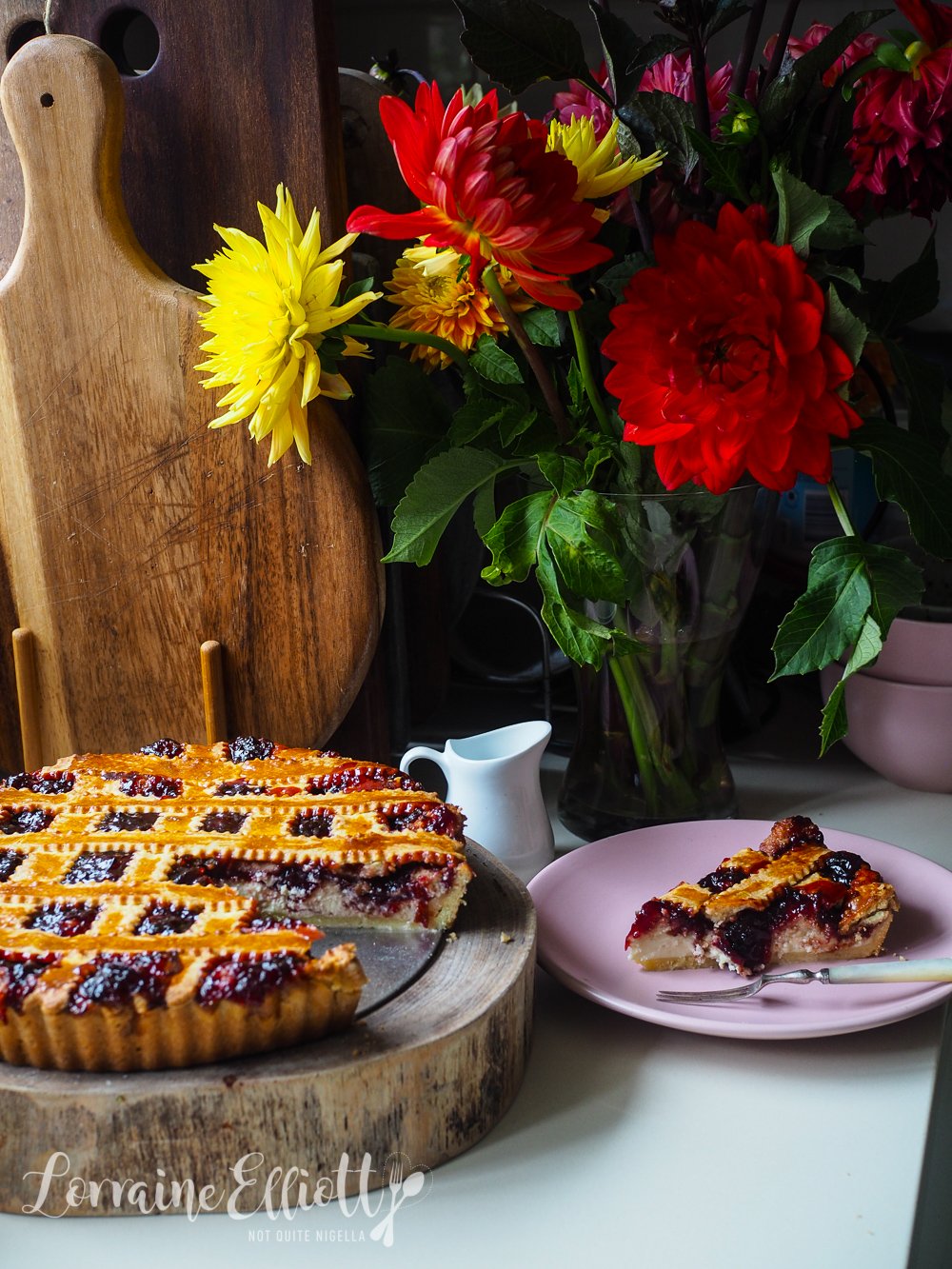 That evening something happened to me that I had never experienced before. My left eye was bloodshot and swollen and I had trouble brushing my teeth. I assumed it was from crying so much but the next day I noticed that I had less movement in the left hand side of my face. By the next time it hadn't subsided and I took myself to the GP. He thought I may either have had a stroke or Bell's Palsy. He told me to go to the emergency department and get it checked right away.

The timing was fortuitous. At 4pm there isn't much of a crowd and the nurse saw me straight away. I spent the next four hours there, seeing nurses, doctors and waiting. I sat on a hard plastic chair and watched the colourful crowd of people. An elderly woman was wheeled in who constantly screamed "Help!" and "I'm in agony!!" for about 2 hours.

Another woman came in her pyjamas clutching a toy Pikachu while an obese man was wheeled in wearing nothing but underpants and a blanket from the EMTs. And during the madness I swear on my deathbed that I smelled Mochi there. A whiff of Mochi's distinct aroma came to me while I was waiting there. I called to her quietly and took my bag off my lap so she could jump into it if she wanted. 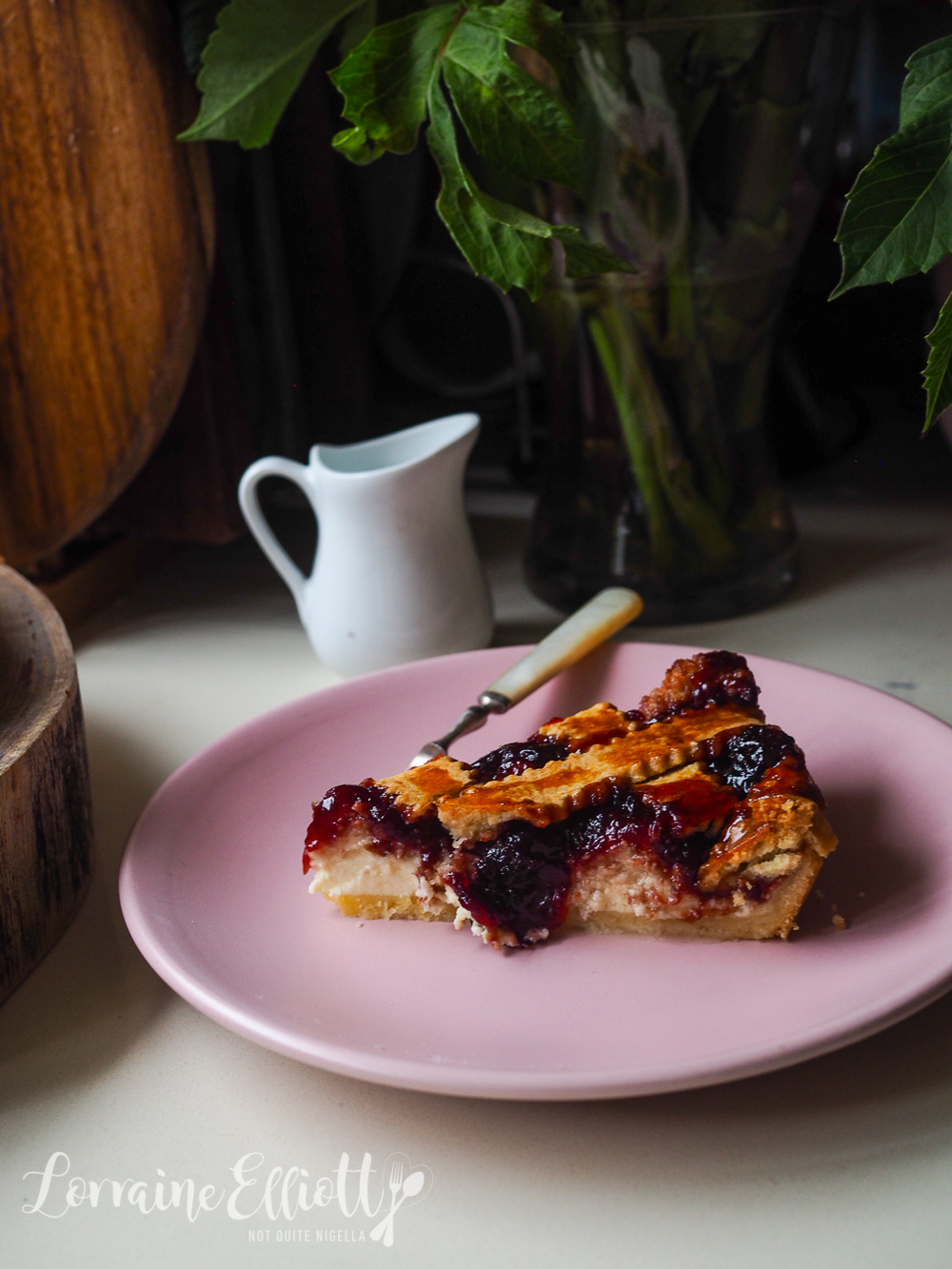 I didn't mind waiting because once they established that I hadn't had a stroke I wasn't in a lot of danger and besides I had Mochi for company. It turns out that I had Bell's Palsy. Not much is known about it except that it can be brought on by a virus or trauma (Angelina Jolie had it after she and Brad Pitt got divorced). I'm assuming it was the latter because it happened just after Mochi's death. They gave me steroids to try and relieve it and a follow up appointment within a few days. I hated February - I had lost my little Moo baby, I now had this to deal with and there was a third piece of news that I received a few days later that felt like a sledgehammer to my stomach.

So things were a little slow with this jam crostata. It doesn't have to take 4 days as I did and if you use a bought jam it will just take a short amount of time. I was wobbly at first in the kitchen, as if I weren't sure of what I was doing. Once I got to making the crostata dough and the easy filling and once I lay the lattice strips I felt like I was approaching normality. I just had seven more long months to go before I would get better. 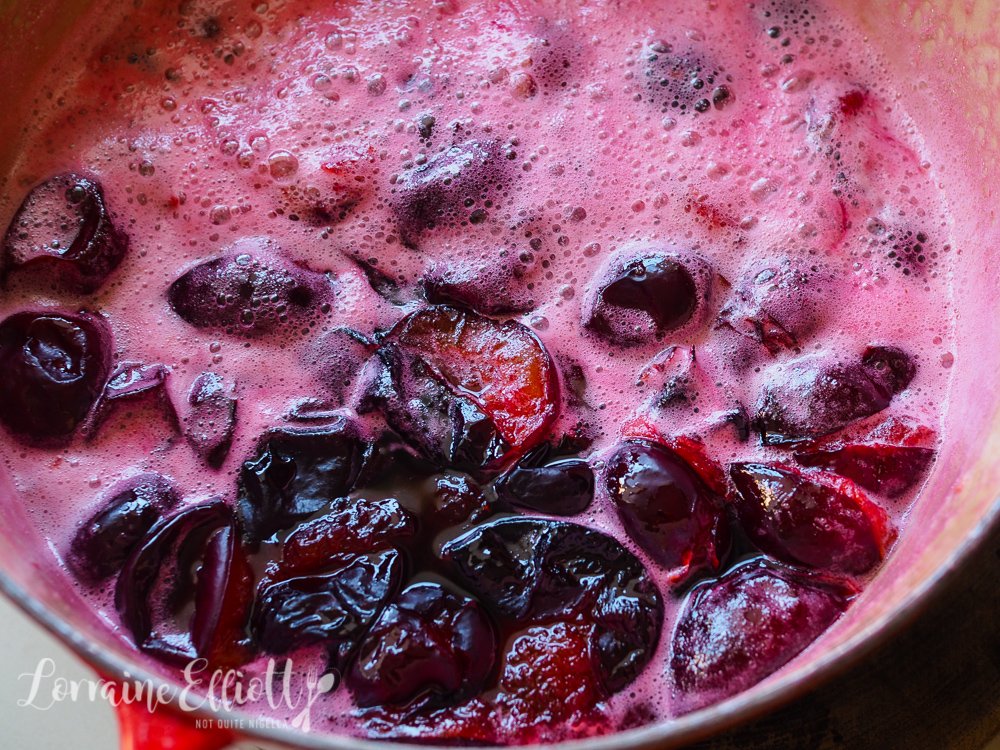 Step 1 - First make the pastry. Place the flour and sugar in a bowl and mix together. Add the eggs and butter and mix with the fingers to create a dough. You may have to add a bit more flour or butter to get it a good consistency. Mix in the bowl and then turn out onto a lightly floured surface. 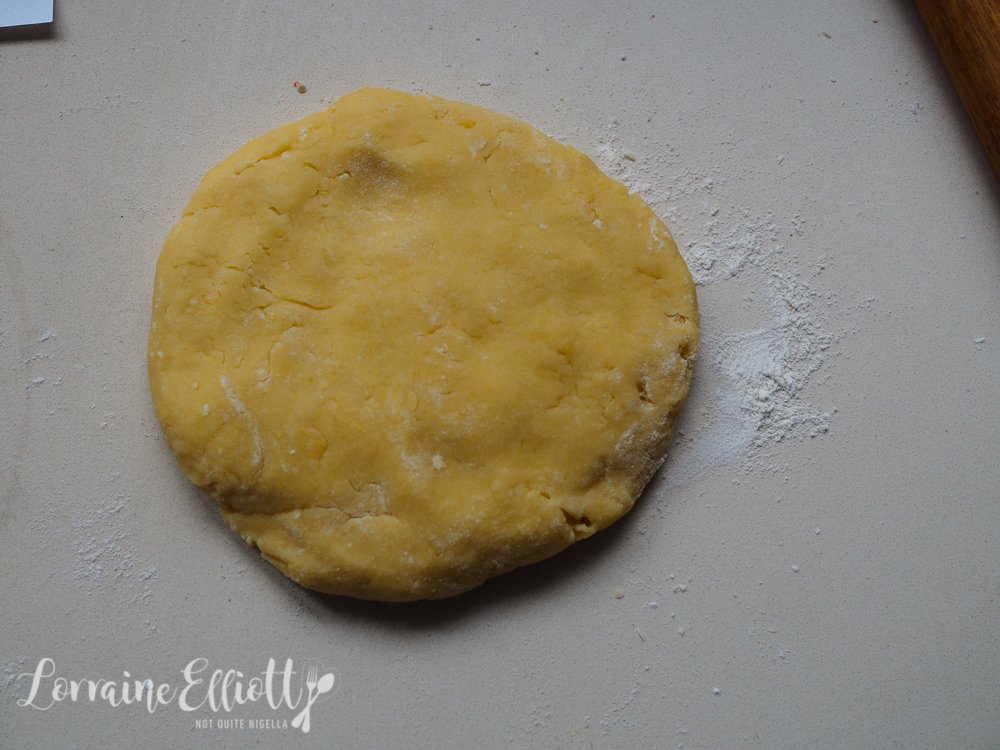 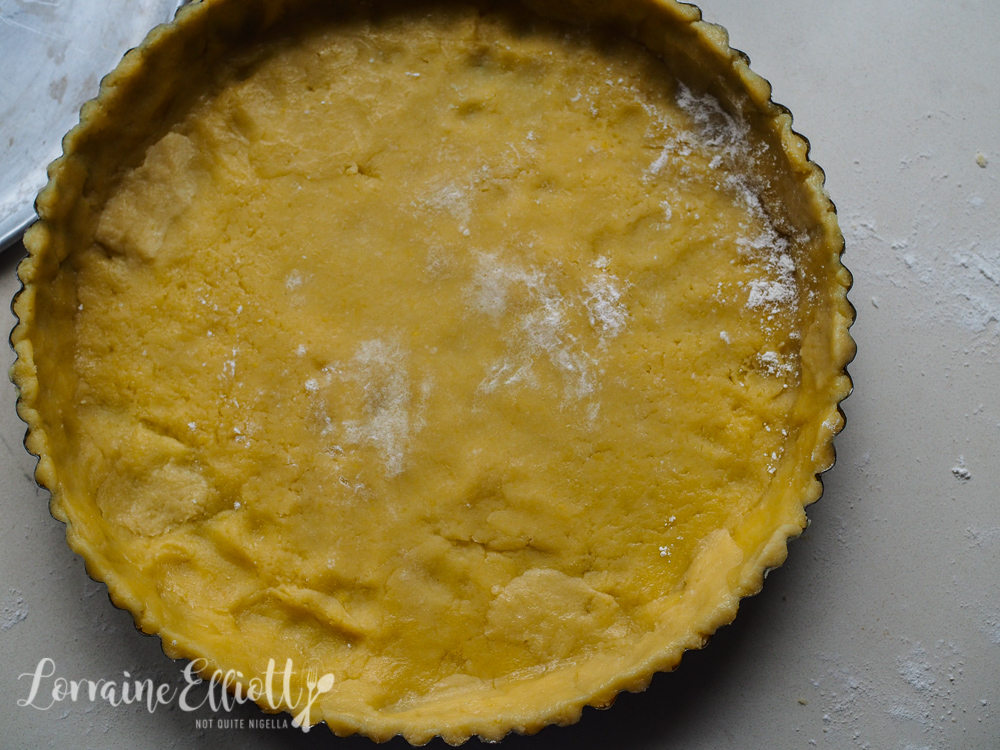 Pastry pressed into the base and sides

Step 2 - Divide into two parts, one slightly larger than the other (2/3 and 1/3). Roll out the smaller disc between two sheets of parchment and then cut lines with a ravioli cutter. Place in the fridge for 30 minutes. 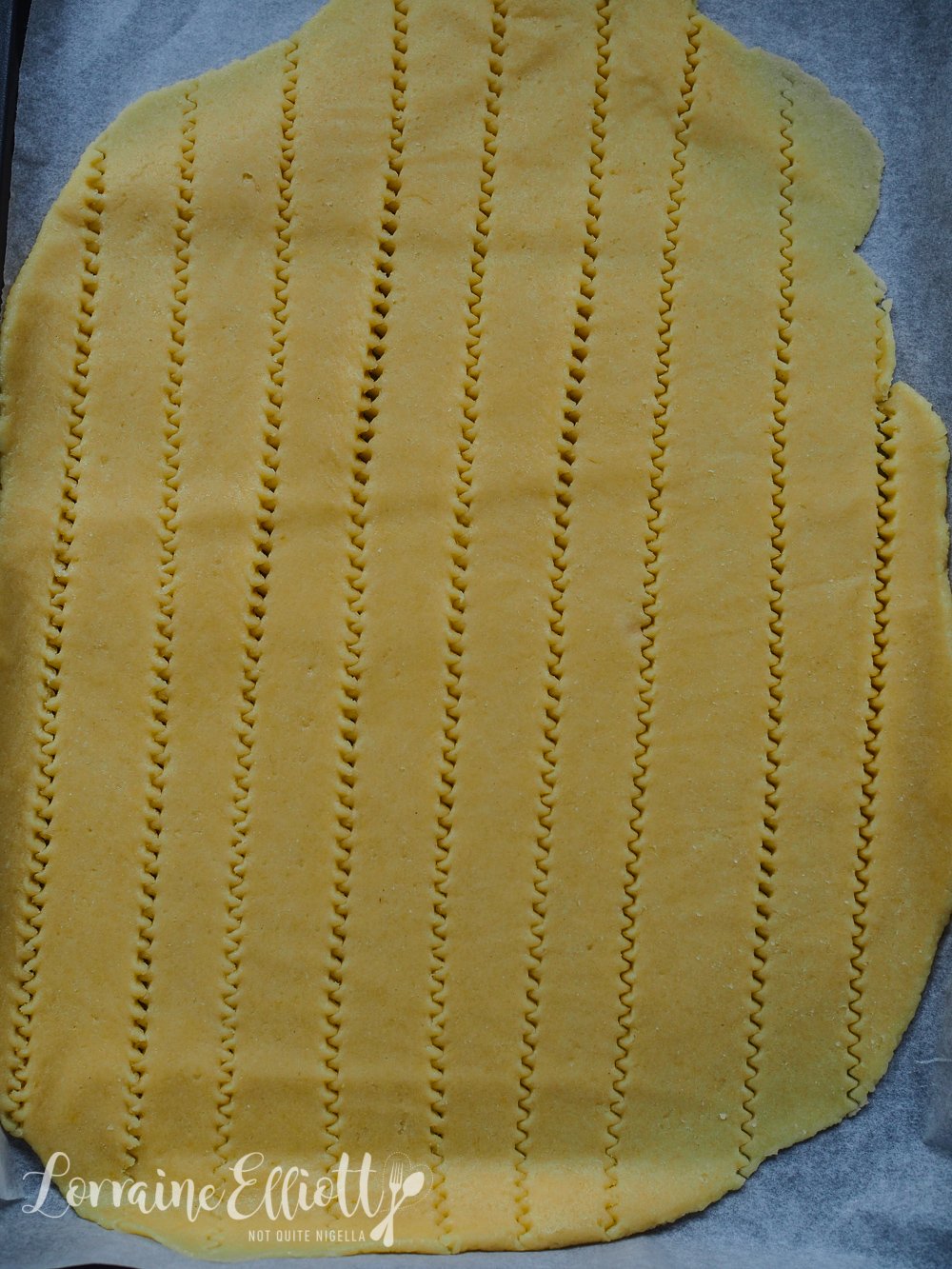 Cutting the pastry strips for the top using a ravioli cutter

Step 3 - Meanwhile take the larger round and press into the base of a 23cm/9.2inch loose bottomed tart tin making sure to smooth out the base so that there are no gaps and press evenly up the sides. Place in the freezer for 15 minutes. 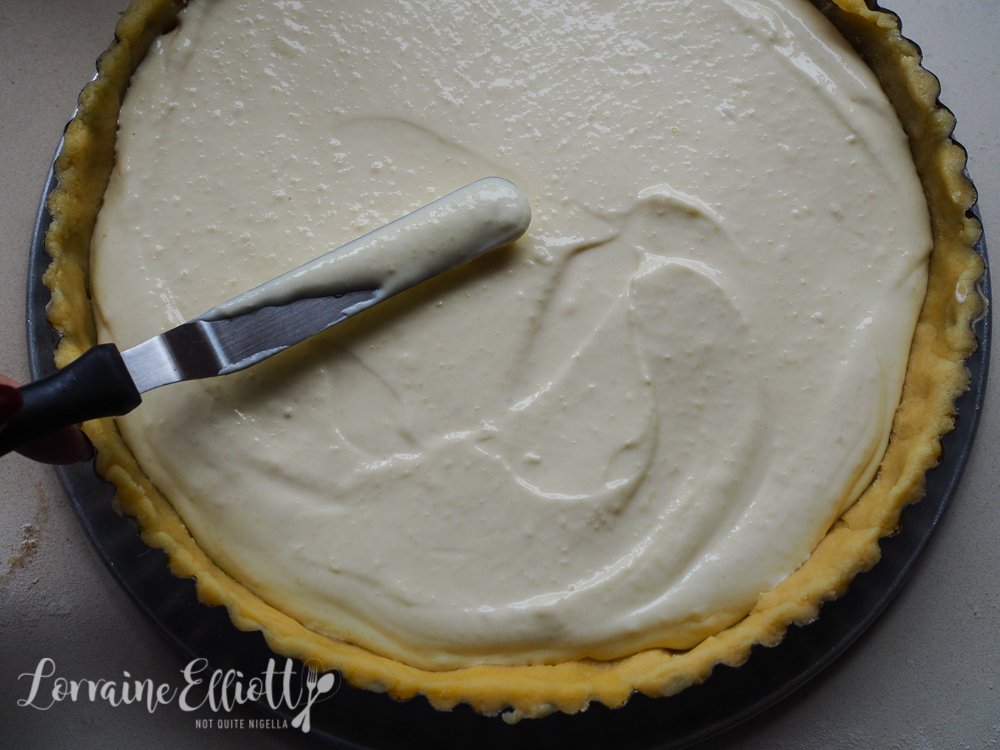 Step 5 - When the pastry has had its time in the freezer, spoon the ricotta filling into the base and smooth with a palette knife. Then gently spread the jam over the top of the ricotta (don't worry, it won't sink). If the jam is stiff, just give it a vigorous stir or even heat it in the microwave for 10-20 seconds to loosen it. 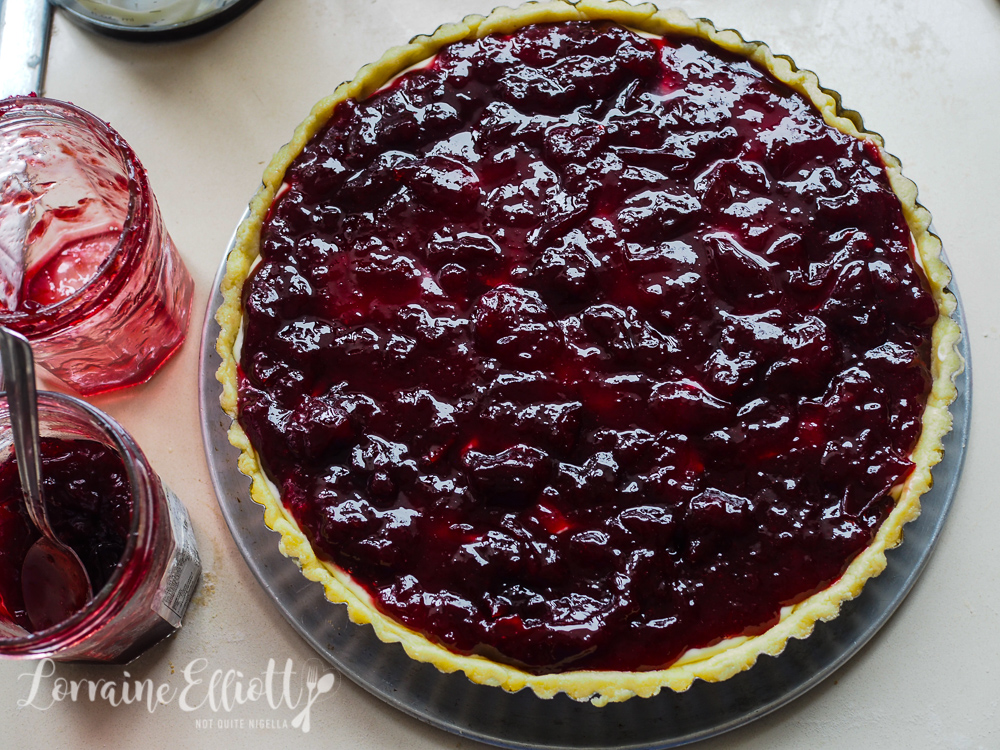 Step 6 - Take out the strips for the topping and gently lay them on top. The pastry is too delicate to do the traditional over and under lattice pattern so don't worry about that. Brush with egg wash and then bake for 55 minutes or until golden. Allow to rest for 1.5 hours before cutting. 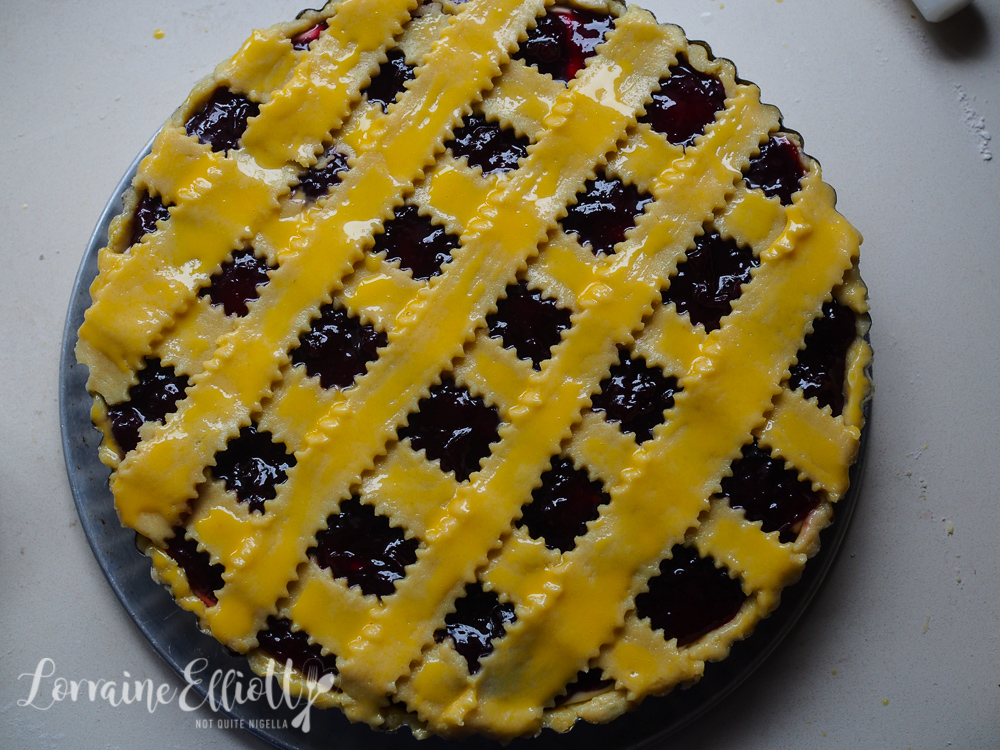 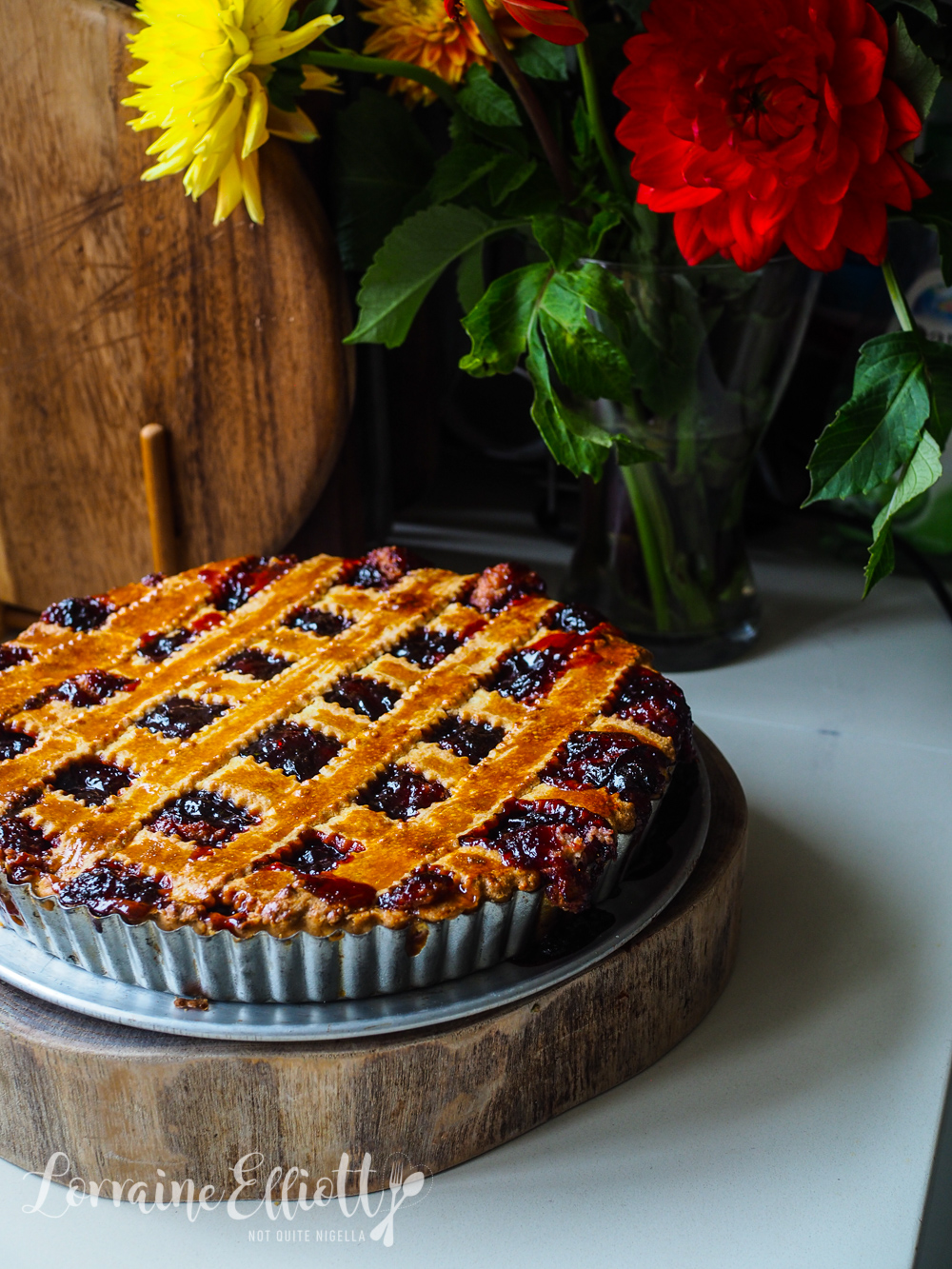