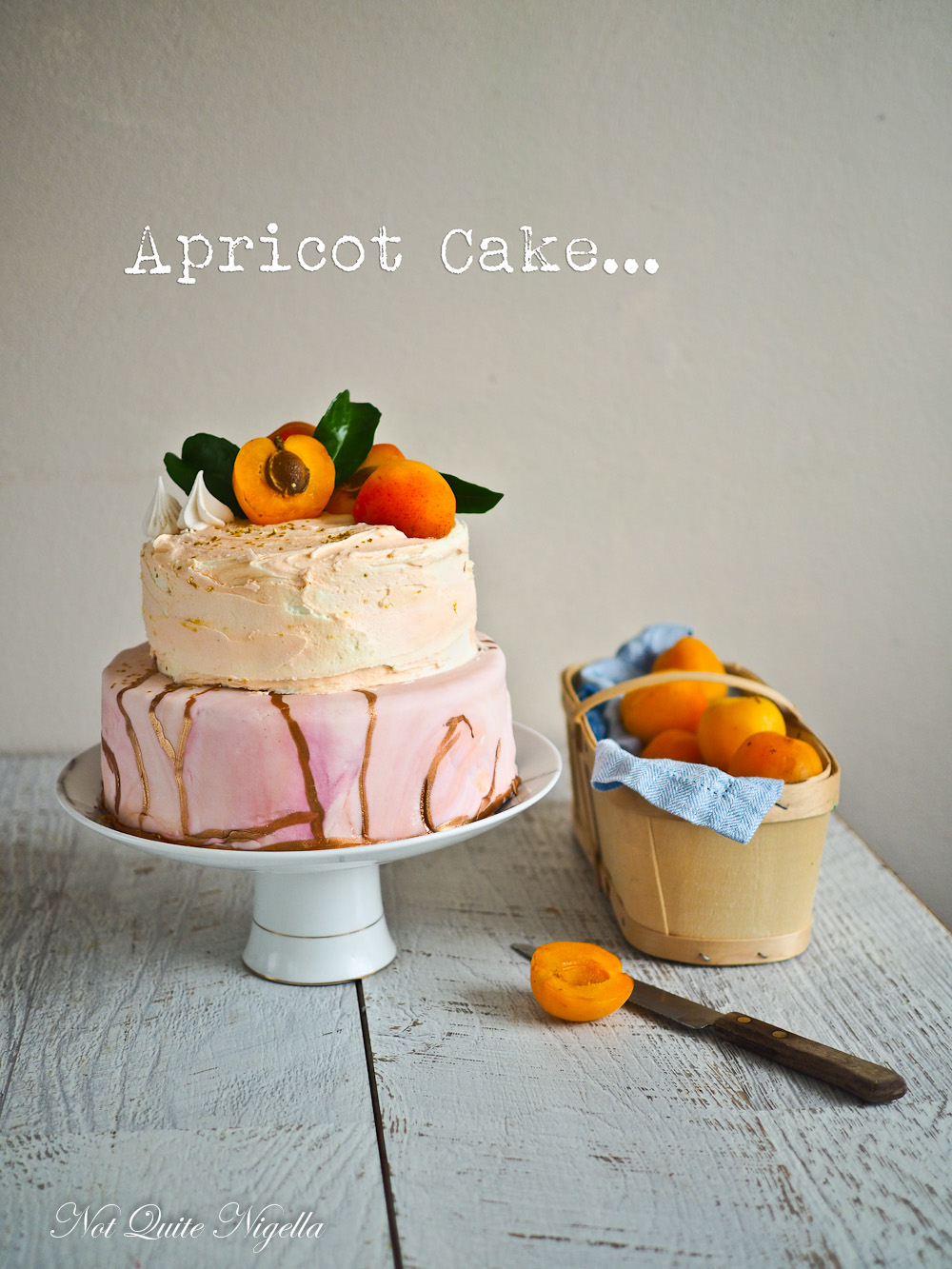 Although apricots are a summer fruit they always seem to appear and then disappear quickly here in Australia so I always make sure to grab them when I can. I bought a large amount of them recently and of course what better thing to make with them but a cake with a surprise inside! I called her Aurora the Apricot Cake.

Most of the time I find buying apricots a bit of a lottery. Much of the time they're tart and hard. But sometimes you'll get a lot of velvety soft apricots that are sweet and sun kissed and taste as sweet as those luscious Turkish apricots. 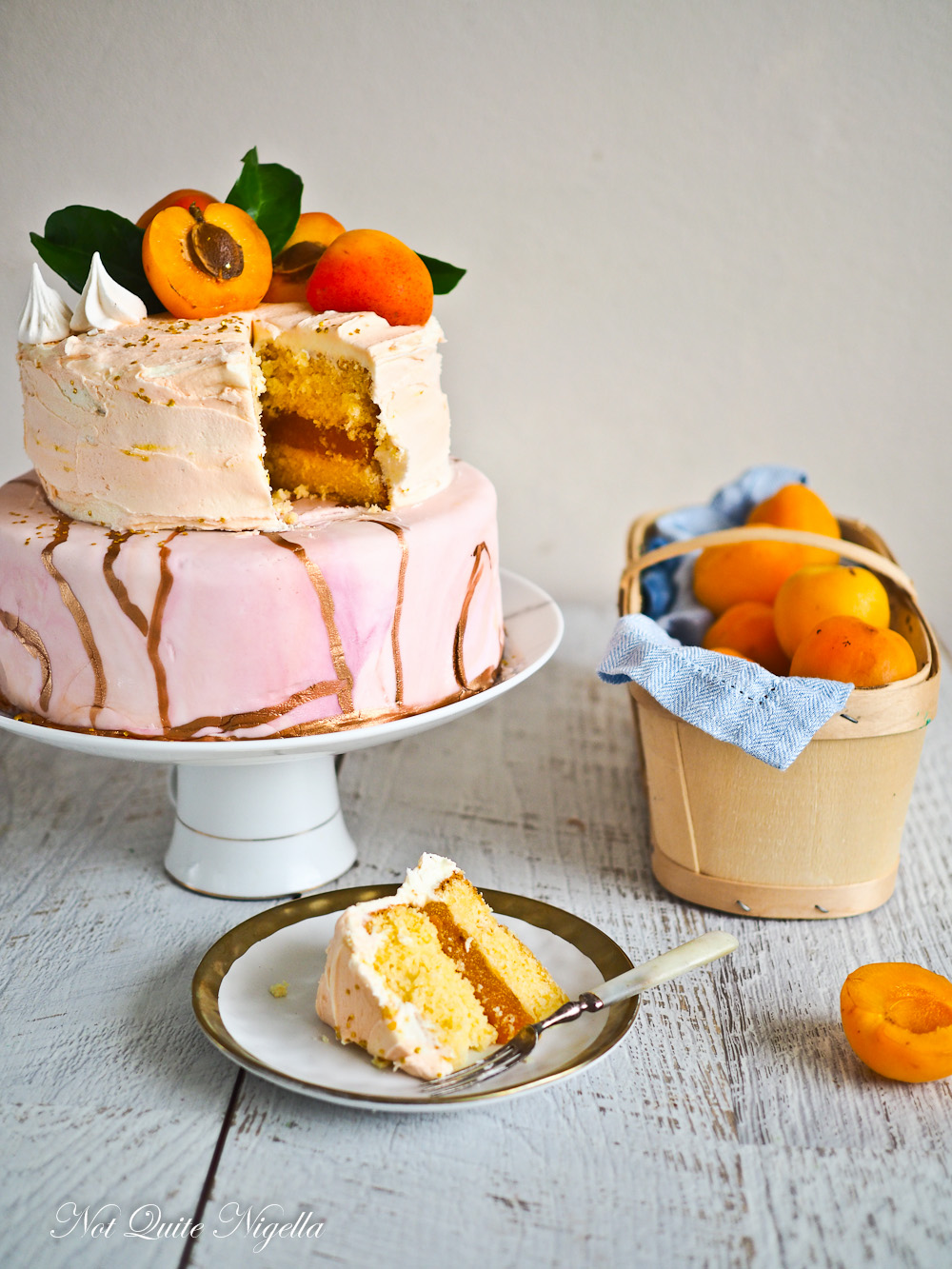 These apricots fell into the former category. I wanted to eat them fresh but my face would pucker up whenever I'd take a bite. But an apricot cake? Yes that would do nicely!

The cake has two layers-one vanilla layer covered in apricot marbled fondant while the top just had a layer of buttercream. Hiding inside both was my favourite part-an apricot jelly layer. While making apricot jam is perfectly delicious, I wanted to experiment with apricot jelly as a cake layer like they do in the buche de noels. The buttercream too is fruity and tangy with apricot nectar and citric acid. It's such a big cake that I ended up giving one layer to Nina and keeping the other one.

Speaking of Nina, the other day she asked me to be her wingman at a family concert. I decline her invitation but she begged and pleaded and I agreed if she would agree to be my wingman at an unspecified event when Mr NQN wasn't able to come with me. She also promised we could eat first which is always a lure for me if you wrap an event around food. 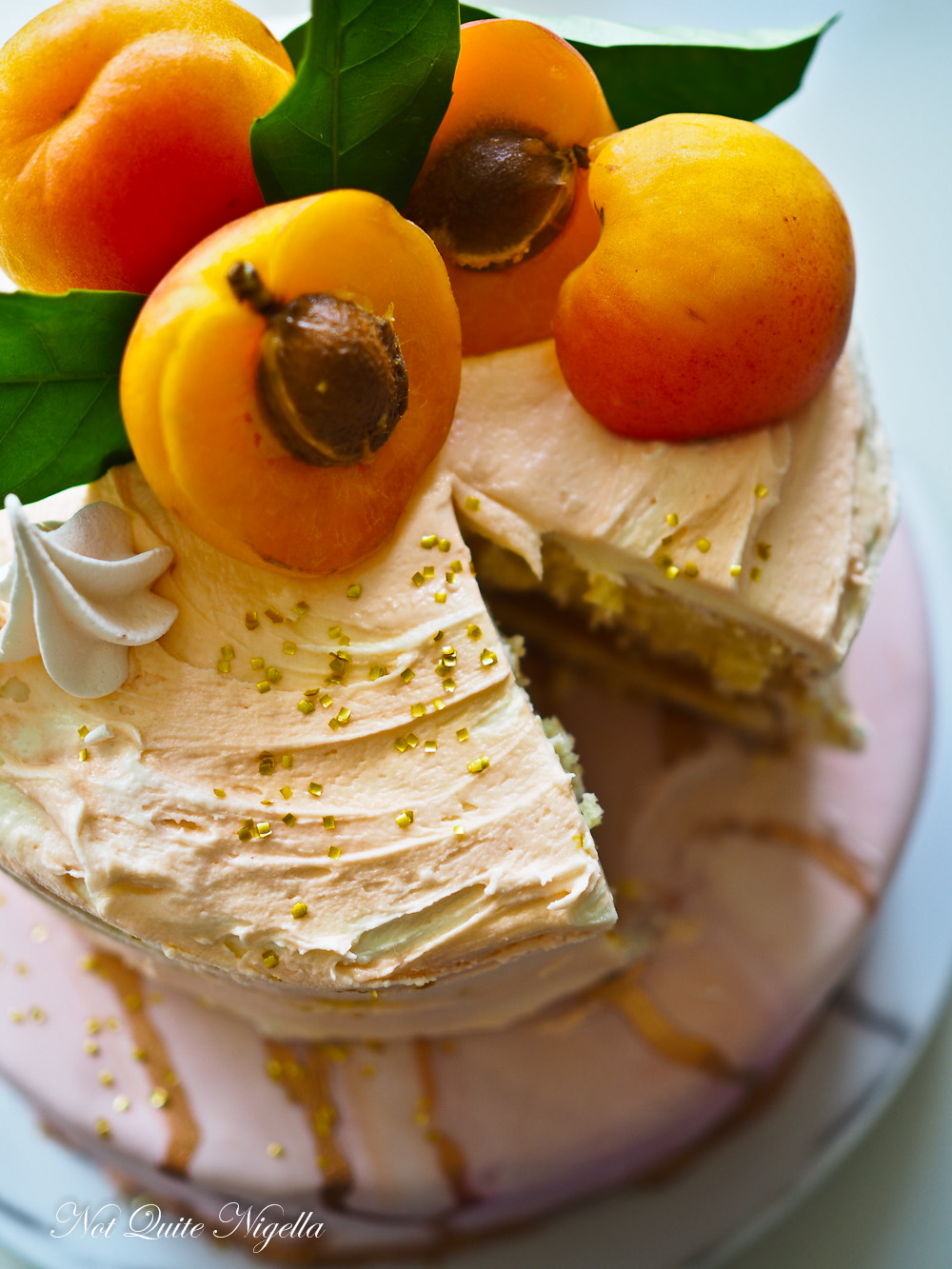 The day came and we had a lovely lunch and went to the concert. It was a double bill and her cousin in law would be playing in the first billed concert so she planned for us to leave after her performance. We also saw her fiance Garth's father at the concert and he joined us. The acoustics for the concert weren't great and it was a sombre number featuring nuns. My back was also aching from several nights' bad sleep and the thin cushions on the fold up chairs didn't do much for it. I didn't know Nina's relative but I figured she was one of the nuns onstage.

Then Garth's father fiddled with his phone and suddenly there was a booming voice saying "The ASX has fallen today....". We could not stop giggling as Garth's dad tried to turn off his phone but the voice kept going as he was shushed by everyone around him. However, what he was doing was looking up the performance as he realised that they had switched around the concerts and we were sitting through the second performance. He just wanted to look up how long it went for. "I think she's on the next one," whispered Nina to me eyes wide, her face grimacing. 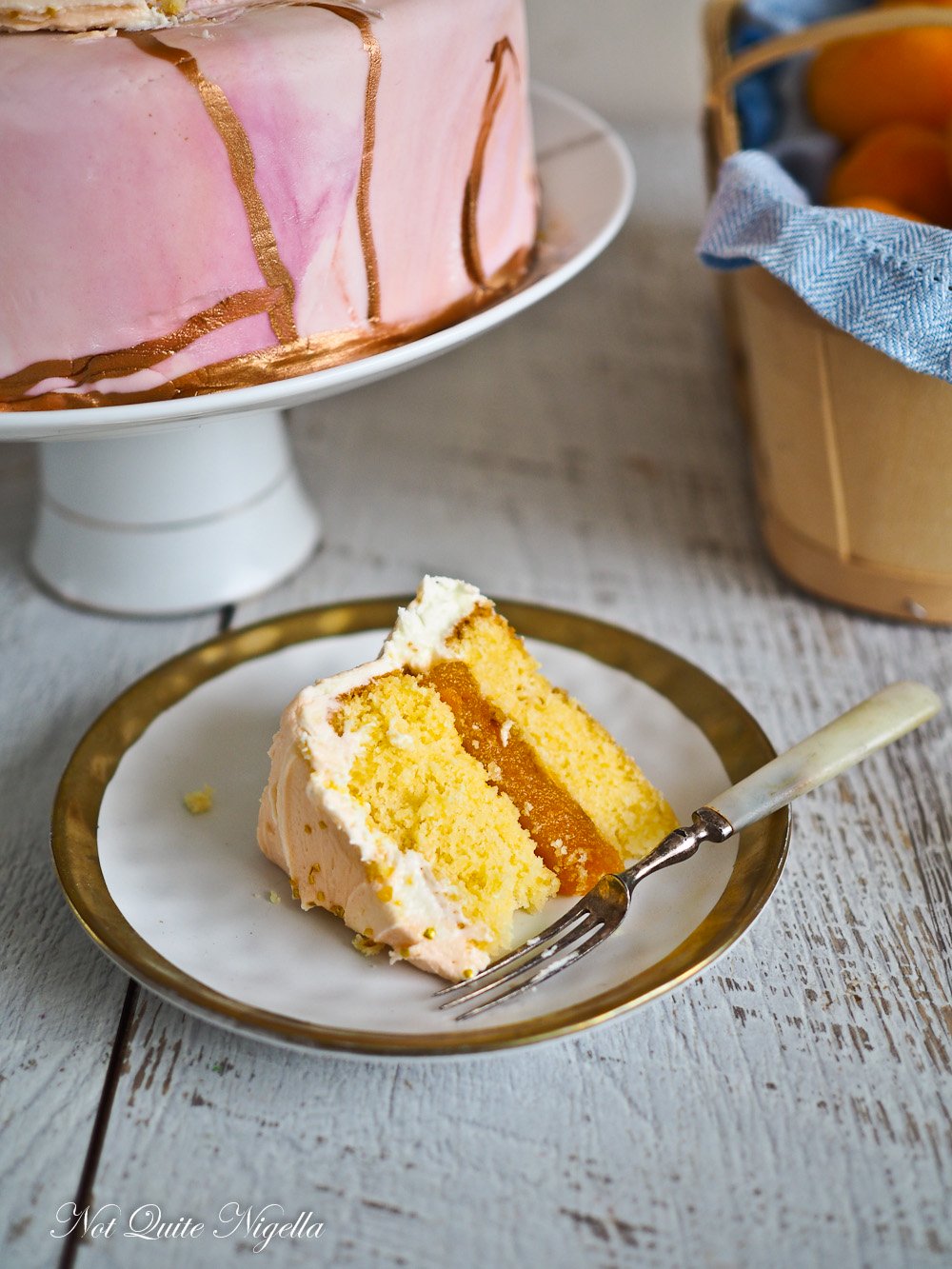 "You owe me two events!" I whispered to her when I realised that we were in for the long haul. With the acoustics I couldn't really understand what was happening in the second performance either. I think it started off as a love triangle and then it turned into a gay encounter in a bedroom but I am not sure. All I know is that now Nina is going to be my wingman for two events! I did cushion the blow with cake but still...

So tell me Dear Reader, are you often a wingman? Do you ever make deals like this? And do you have any secrets to picking great apricots? Do you like apricots? 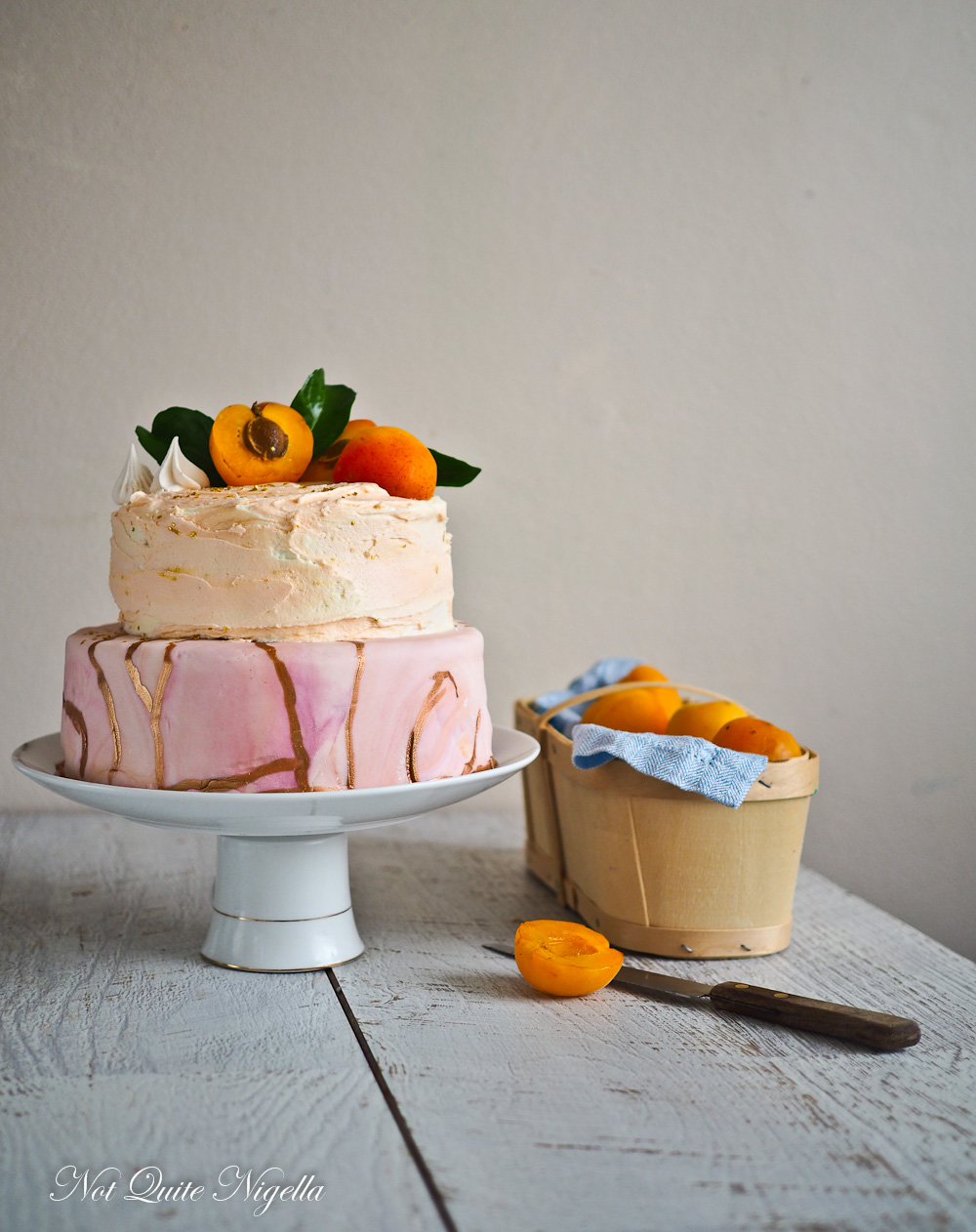 Step 1 - First bake the cakes. Line a 20cm and a 15cm springform tin and preheat oven to 160C/320F. Beat the butter and sugar together on medium speed for 10 minutes. Beat in the eggs, one at a time and then fold in the flour, baking powder, buttermilk and apricot essence until just combined.

Step 2 - Scoop into the prepared tins and bake for 40 minutes (for the 15cm one) and 50-55 minutes for the 20cm one. Allow to cool in the tin for 5 minutes, then release and allow to cool completely.

Step 3 - While it is baking, make the apricot jelly insert. Place the halved apricots in a saucepan and add 1/4 cup water. Bring to a boil and then cook until the apricots are soft and jammy and resemble a puree (add a little more water if you need it). Add the sugar and vanilla and stir and dissolve and then cook off any liquid. Taste, if your apricots are tart you may need some more sugar.

Step 4 - Then soak the gelatine leaves in cold water for 3 minutes. Squeeze well and stir in with the apricot puree. Divide the puree in a greased 15cm and a 20cm tin and allow to set in the fridge.

Step 5 - Make the buttercream by whisking the butter, icing sugar, juice and citric acid on low speed at first (to avoid the icing sugar going everywhere) and then increasing to high speed. Whisk for 8 minutes or until fluffy. Remove 1/2 cup of the icing and tint it with the copper food colouring.

Step 6 - Slice the cakes in half horizontally. Place the jelly insert in the centres and place the other half on top. Pipe some buttercream around the cakes. Refrigerate both of them for 30 minutes.

Step 7 - Take the larger one and smooth the buttercream with a cake scraper on the base and sides. Place back in the fridge.

Step 8 - Sprinkle cornflour/fine cornstarch on a clean surface and divide the fondant into four roughly even portions. Leave one white, tint the other ones fuchsia, copper and dusty rose (just one drop will do). Twist them together twice and then roll out the fondant into a large circle. Cover the large cake with the fondant smoothing it out and trimming it with a sharp paring knife. Mix some vodka with edible copper lustre dust and paint patterns on the outside of the cake.

Step 9 - Then take the smaller cake and dab the copper coloured buttercream on the sides. Smooth the sides with a cake scraper. Place this cake on top of the larger cake. Decorate with fresh apricots, leaves and edible gold glitter.