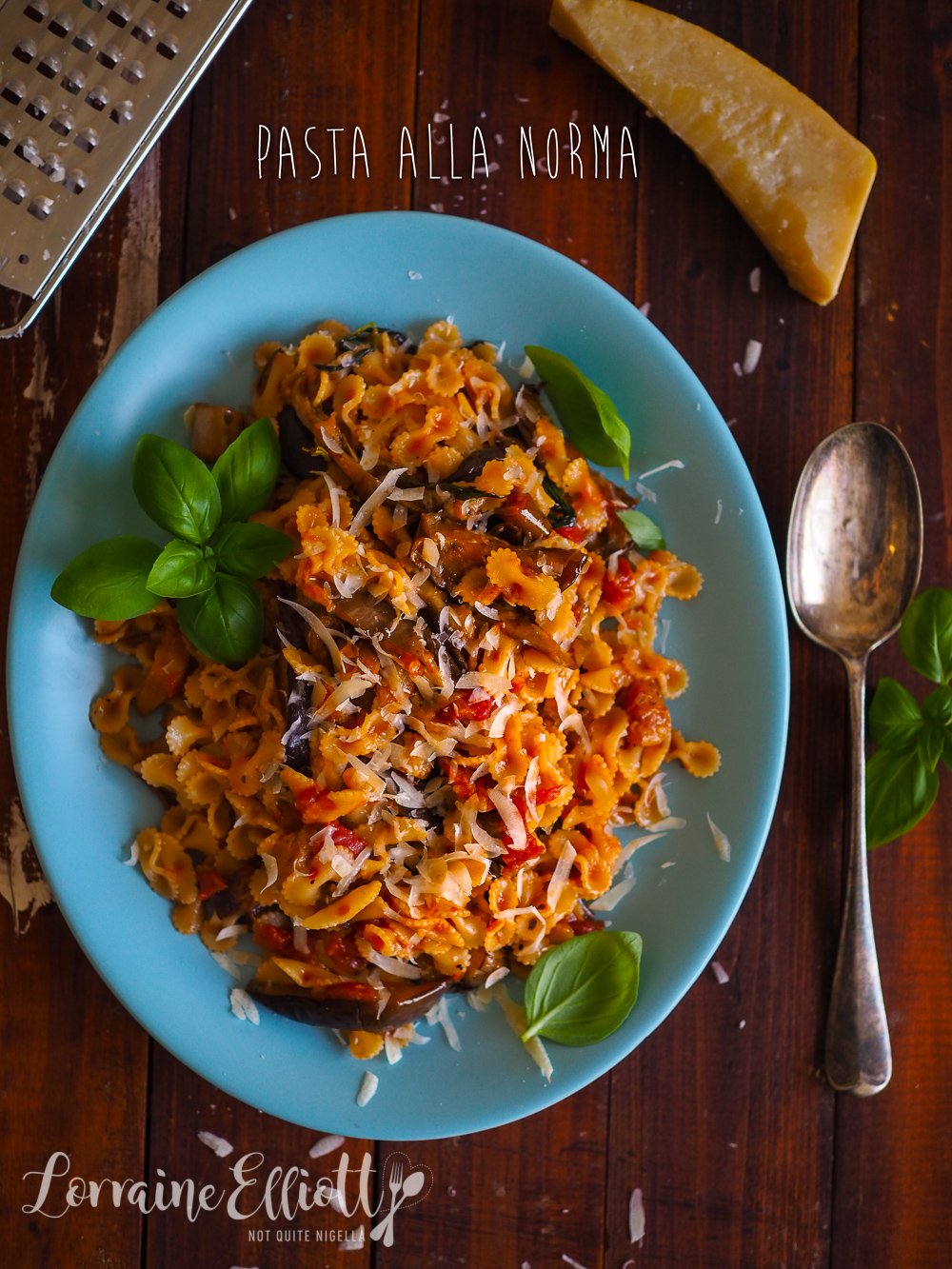 With eggplants or aubergines in season right now try this comforting eggplant Pasta Alla Norma. This Sicilian pasta dish comes from Catania. It's easy, tasty and vegetarian and I promise you don't have to stand in front of your stovetop for long!

Who is Norma? The Norma from the name is from the Vincenzo Bellini opera "Norma". After tasting it Italian writer Nino Martoglioh exclaimed, "This is a real 'Norma'! or the word they used to exemplify excellent. 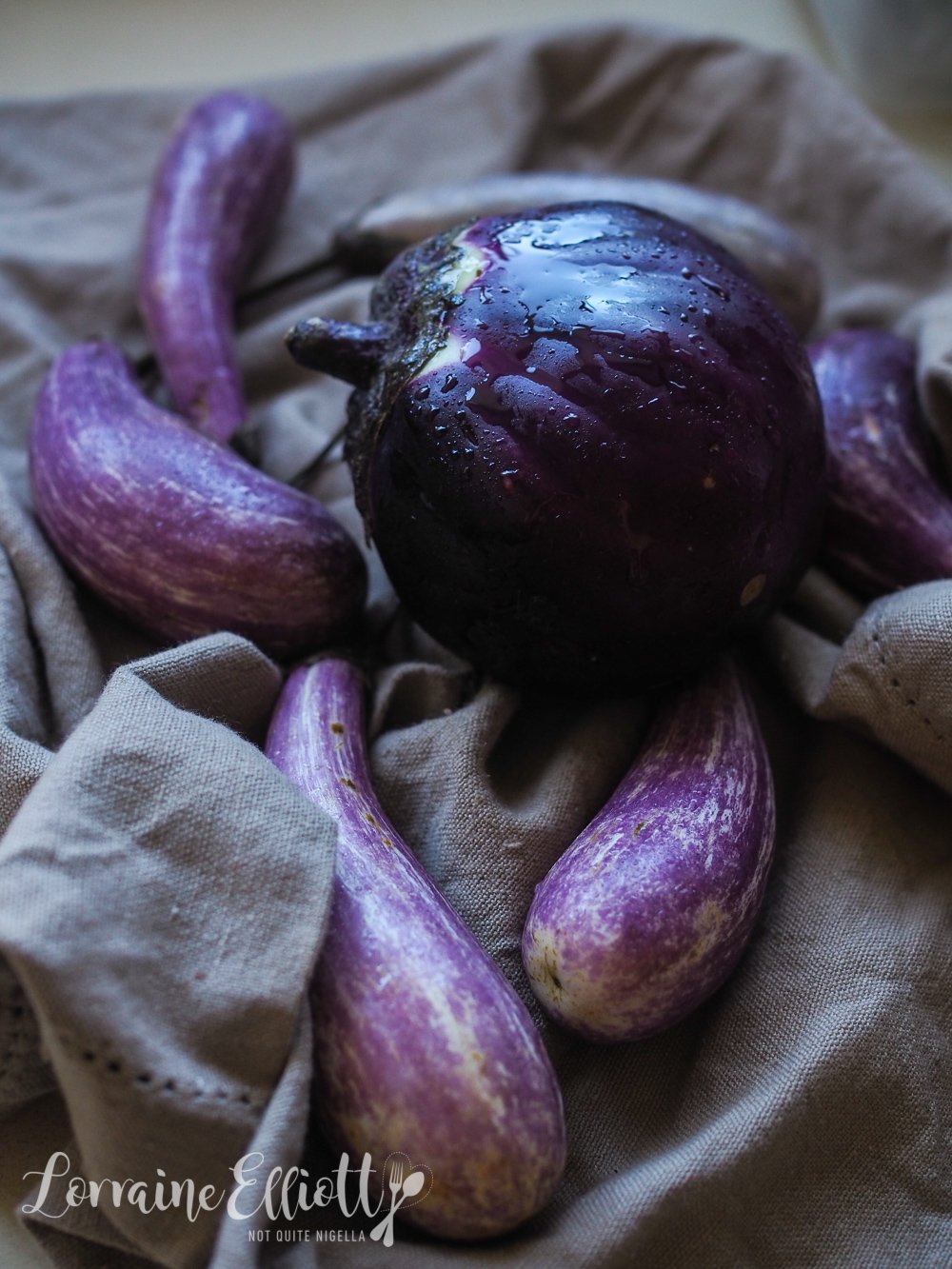 To salt or not to salt eggplants? You generally salt eggplants to remove bitterness but I've only made one dish where the eggplant needed salting. If you have a large eggplant with lots of seeds inside, cut it up, salt generously and sit in a colander for 30 minutes. Rinse the salt from the eggplant afterwards. If you don't have the time or want to salt just use slender Japanese eggplants.

My Pasta Alla Norma recipe hack: Usually you would stand at the stove frying eggplant but I like to avoid this as the eggplant pieces spit out oil especially towards the end. My method is to toss the eggplant pieces in the oil so that they soak up oil then bake them for 20 mins. Afterwards you just need to fry the pieces for a couple of minutes to get that browning on the outside and sticky texture. 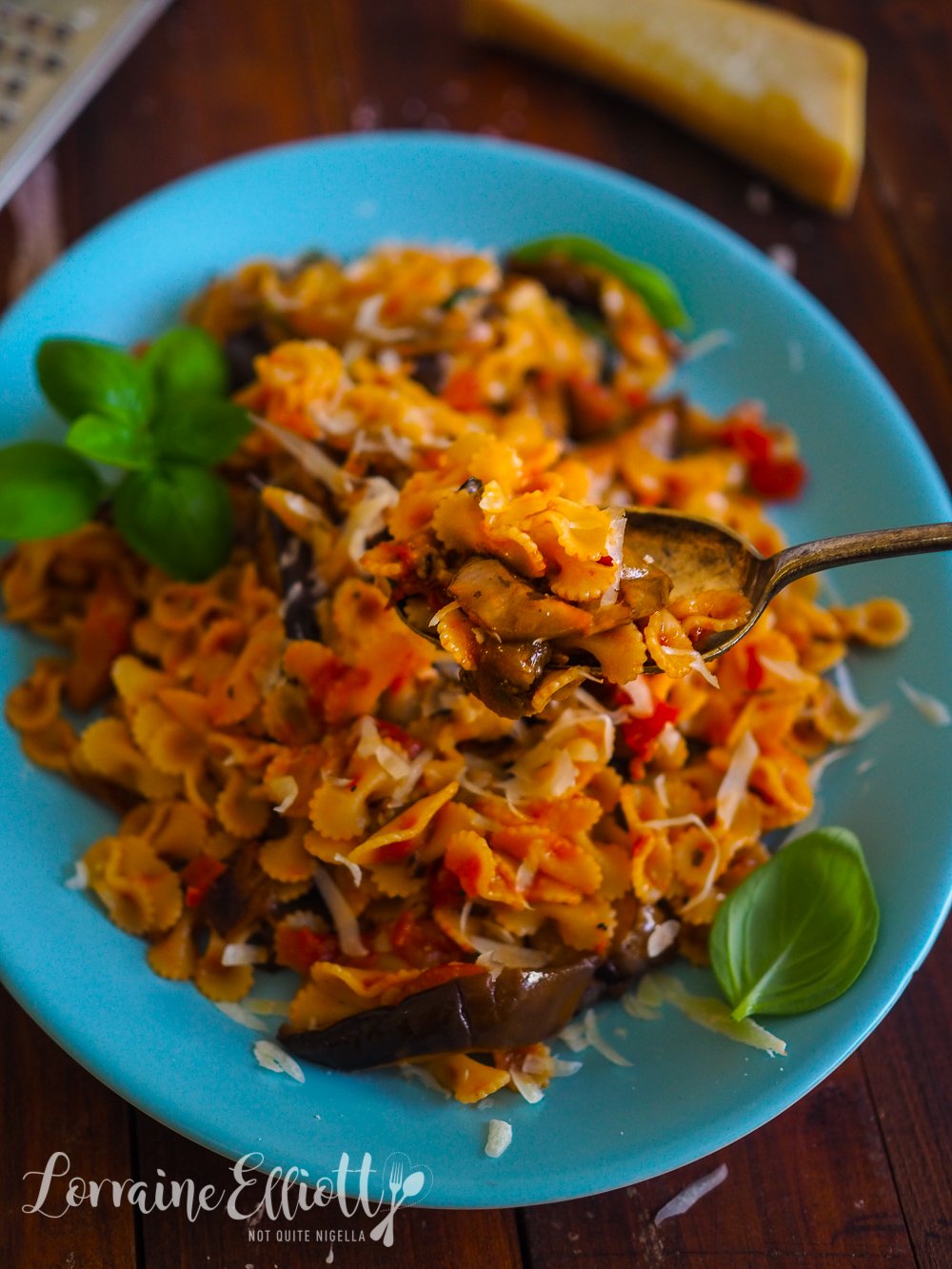 Skin on or off eggplant? I like keeping skins on vegetables as much as possible. In this pasta I don't think you really need to peel them.

Can we reduce the amount of oil? Sure, try parboiling the eggplant for a few minutes and then briefly frying it to brown the eggplant.

Pasta shapes: I know that pasta is a hot commodity so please understand that my unusual choice of Tripoline #68 was not from a recent purchase. Rather it was a bag of pasta I bought last year sometime (which feels SO LONG AGO) when pasta was found in abundance and not like it is today where pasta spotting is like rare bird spotting. Long pastas or most short pastas work well which makes this a super versatile recipe. I like shorter shapes that have cavities to hold the sauce like shells or rigatoni.

Want to upp the flavour? This is a fairly subtle pasta dish that I wanted to add more flavour to. Some suggestions are capers, black olives or 300g/10.6ozs diced pancetta (add these after the garlic and cook pancetta well). None of these suggestions are traditional and I suspect I might be in a lot of trouble for suggesting this but the heart wants what the heart wants... 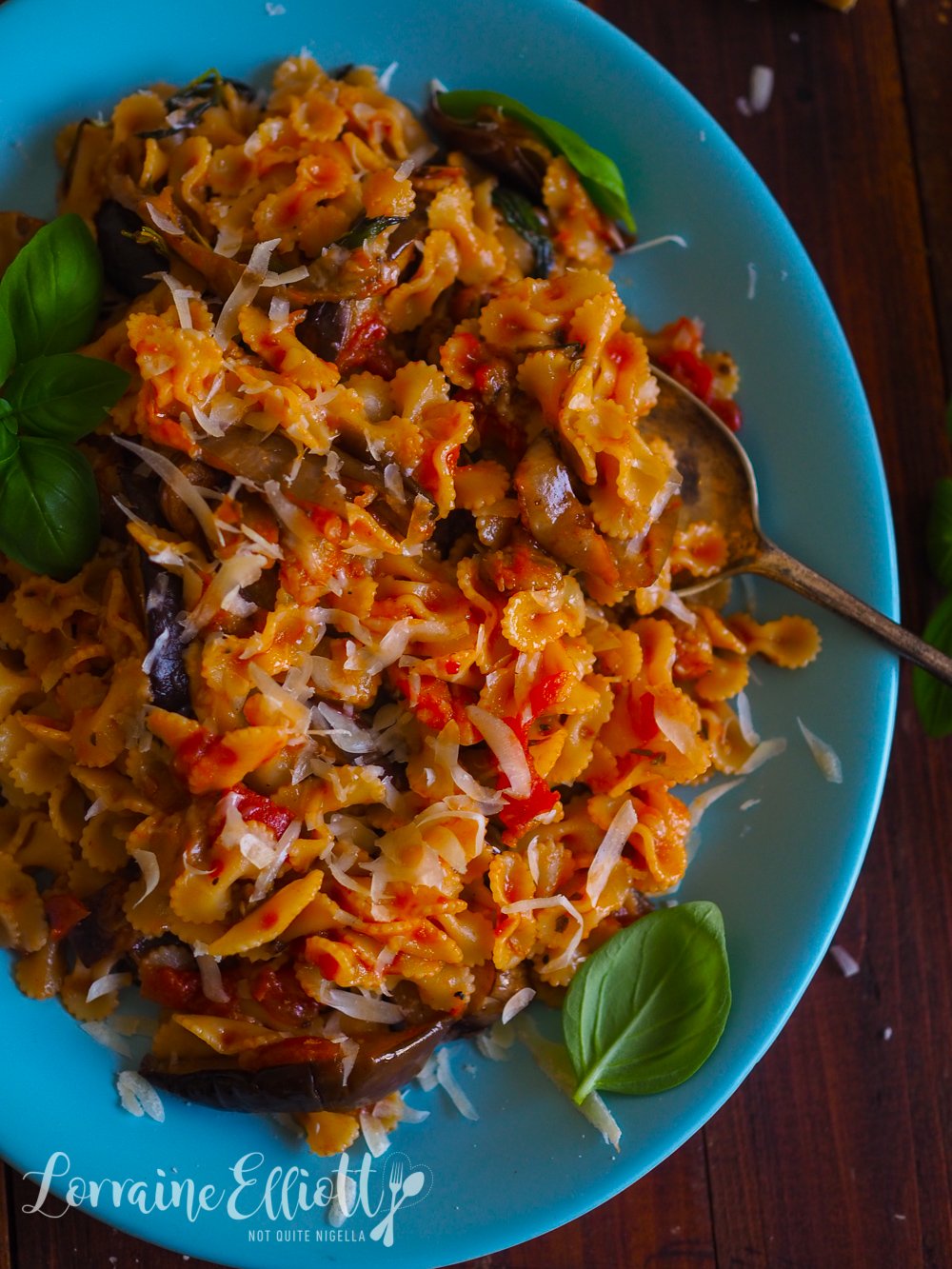 I love eggplant and will gravitate towards any dish with eggplant but one of my dear friends isn't such a fan of eggplant and sometimes I forget that and try to order it (well when we were eating out pre COVID!).

Ivy told me the other day that she keeps a list on her phone about her friends and family's preferences.

"What does it say?" I asked, curious to see what she had written about me. In true Ivy fashion she sent my list over and had me spot on. Every single thing she had written about me was true (I LOVE flossing my teeth and LOATHE all sort of no 2 conversation!) and it was a clear, concise list of my likes and dislikes. It prompted me to start a list on my nearest and dearest just so I don't forget what matters to them.

So tell me Dear Reader, do you have a list of your friends or families likes or dislikes? And tell me some things that you like and dislike! 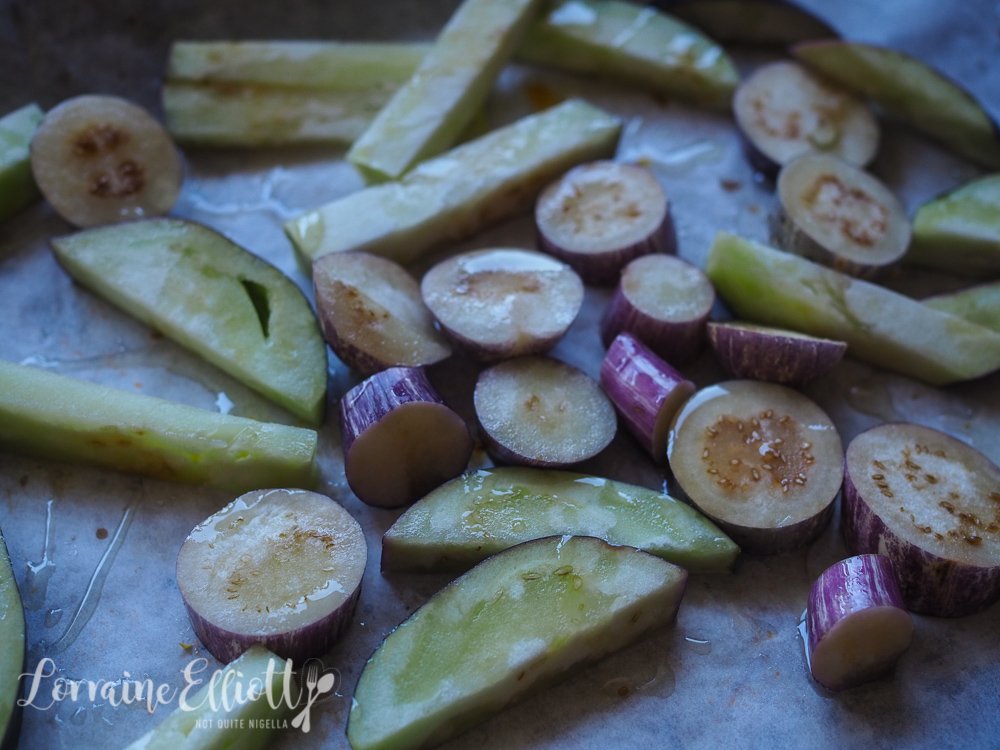 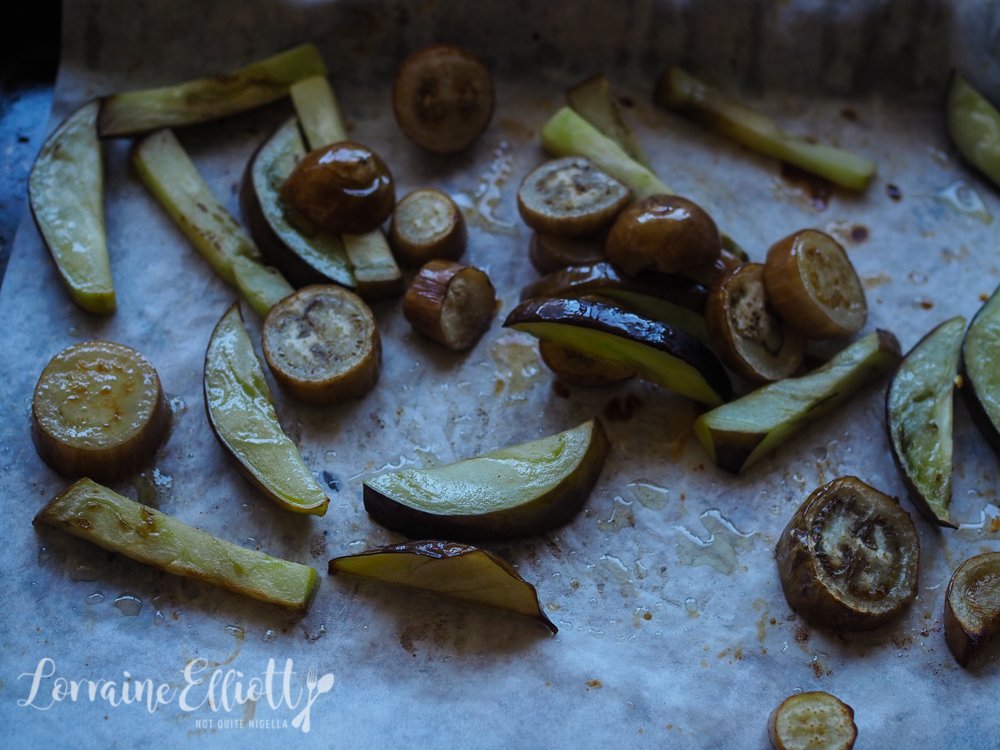 After softening in the oven

Step 1 - Preheat oven to 200C/400F and line 2 trays with parchment. First slice the eggplant into strips or coins (depending on what type of eggplant you use). I toss the eggplant in the oil and then spread it on two trays and bake for 25 minutes turning over halfway. Place one batch (you'll do 2 batches) in a frypan on high heat and then brown the eggplant and finish off cooking (it will only take a minute for each batch). 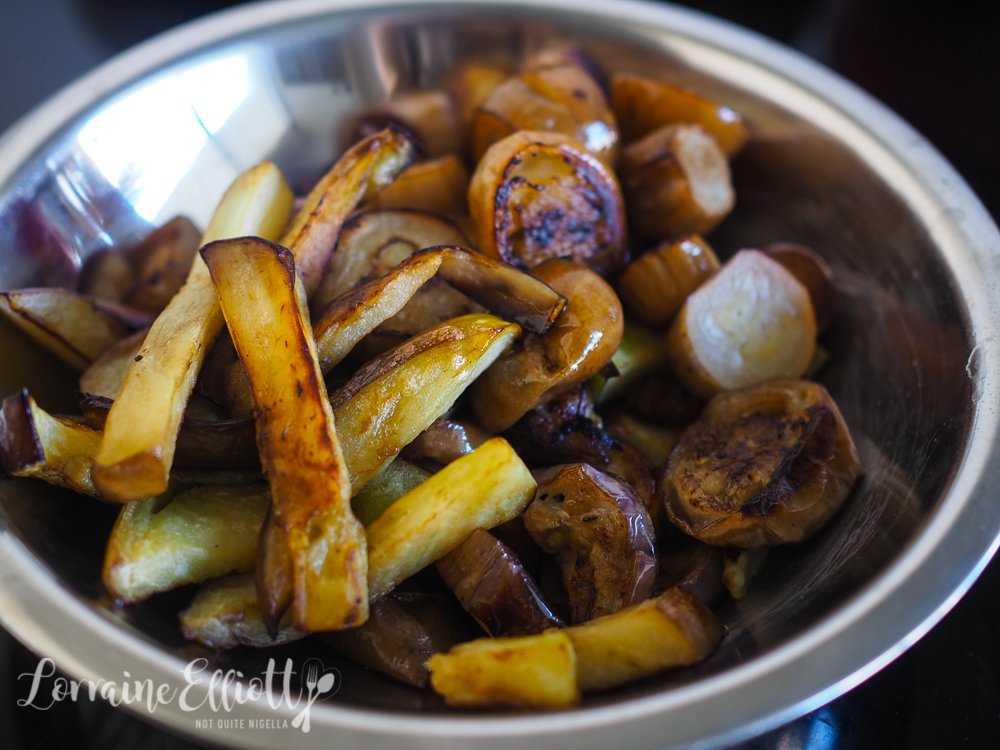 Getting a final pan fry to brown

Step 2 - Add the garlic and saute for a minute. Add the pancetta cubes (if using) and fry for 3-4 minutes until browned at the edges and softened. Then add the tomatoes, chilli flakes, chopped basil leaves, mint and parsley. Allow to simmer until rich in colour (around 10 minutes). 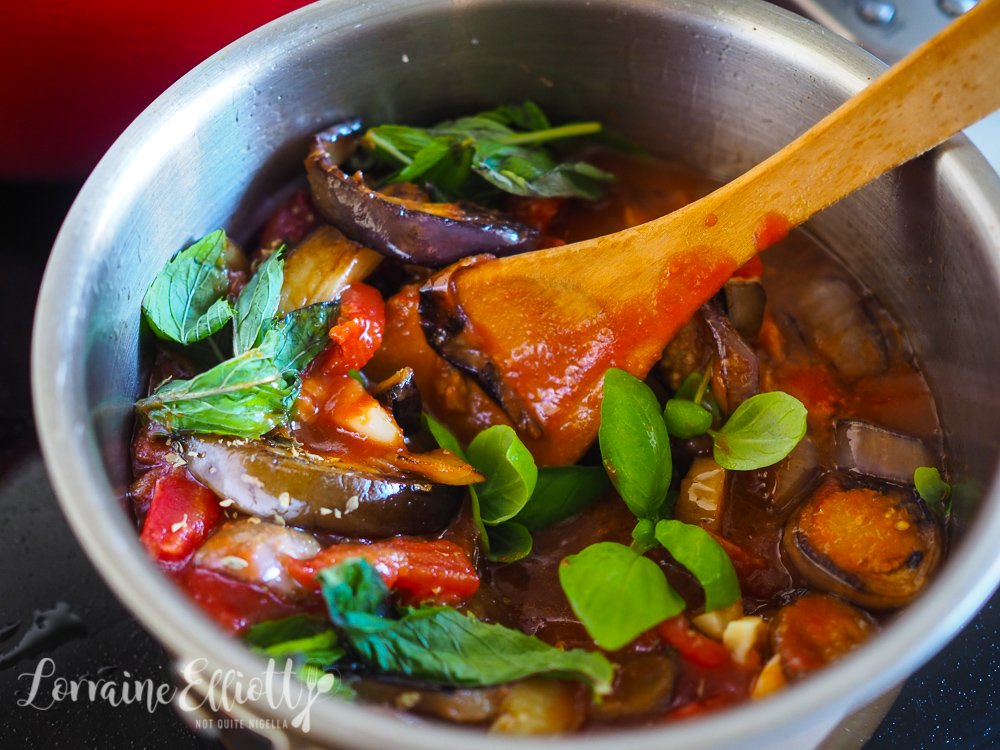 Step 3 - While the sauce is cooking, cook the pasta in plenty of salted, boiling water. Drain and then toss in the sauce. Season well. Top with grated cheese and basil. 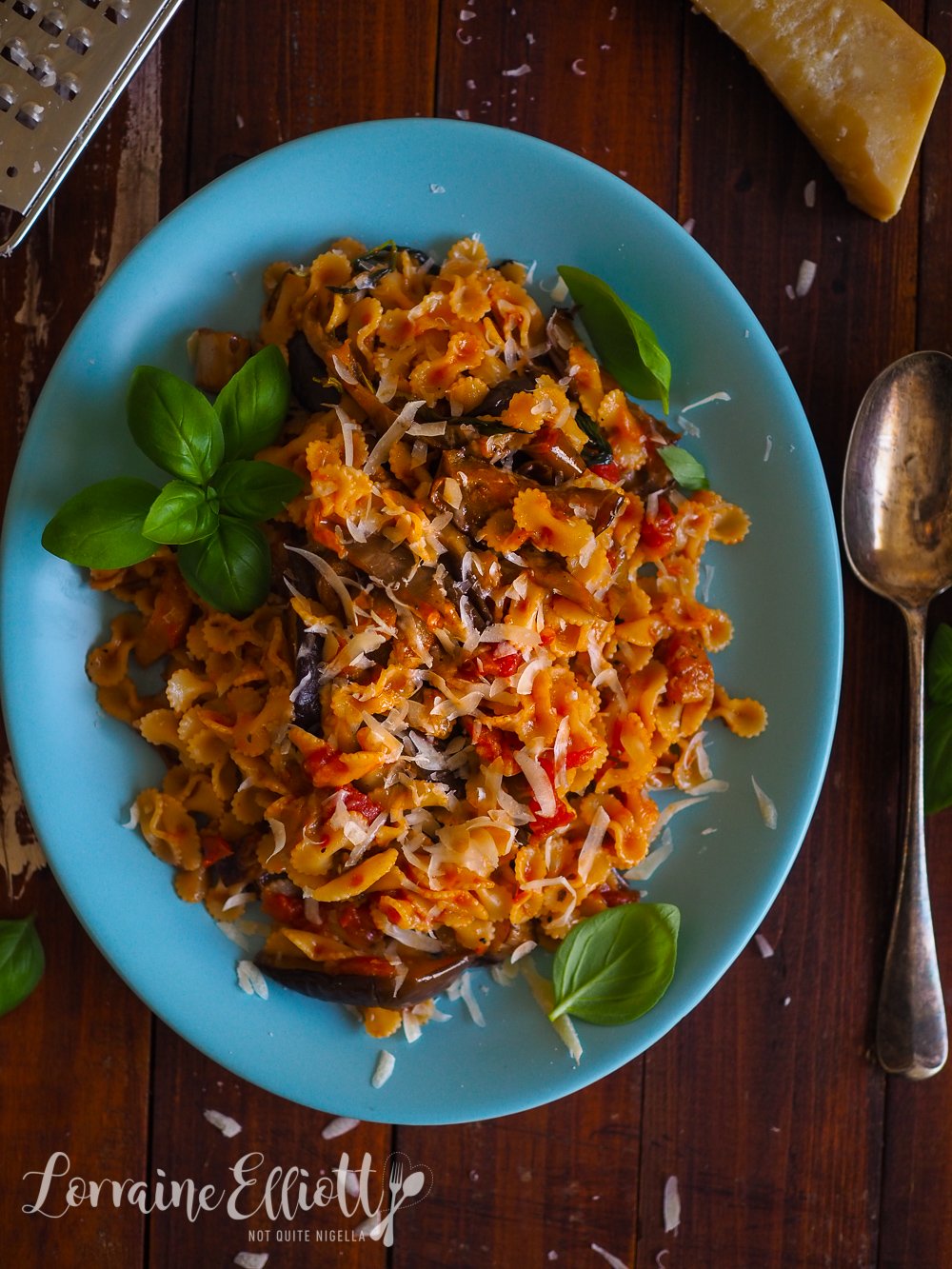