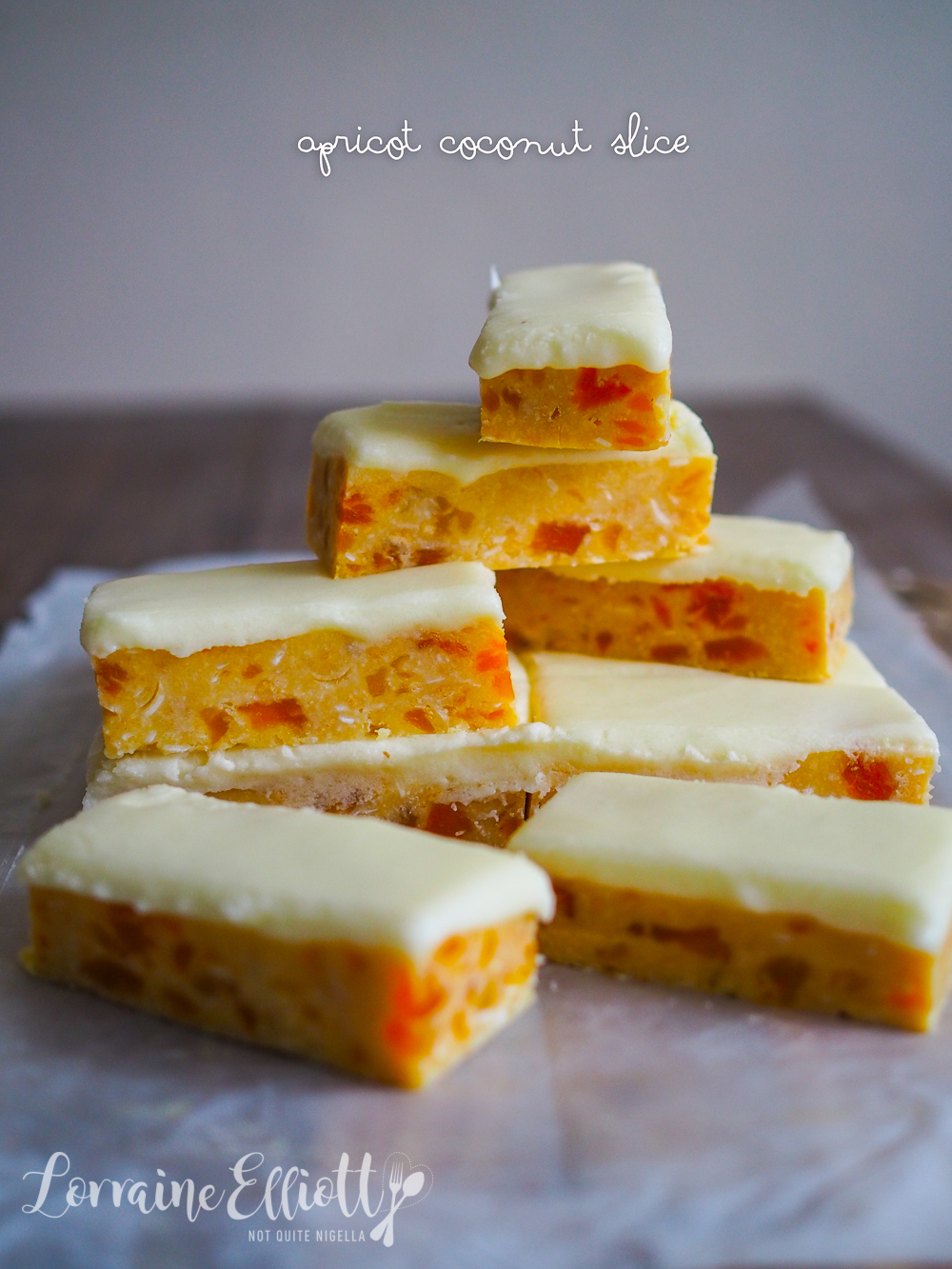 Apricot and coconut slice is a fantastic classic Australian slice that is easy to make and feeds a crowd. Made from simple, pantry friendly ingredients it is studded with apricots and coconut in a cookie base!

This is another recipe from my friend Nic's mother, the queen of slices. It is a classic Australian recipe that Nic passed on to me and it was so old that the measurements were still in imperial measures! 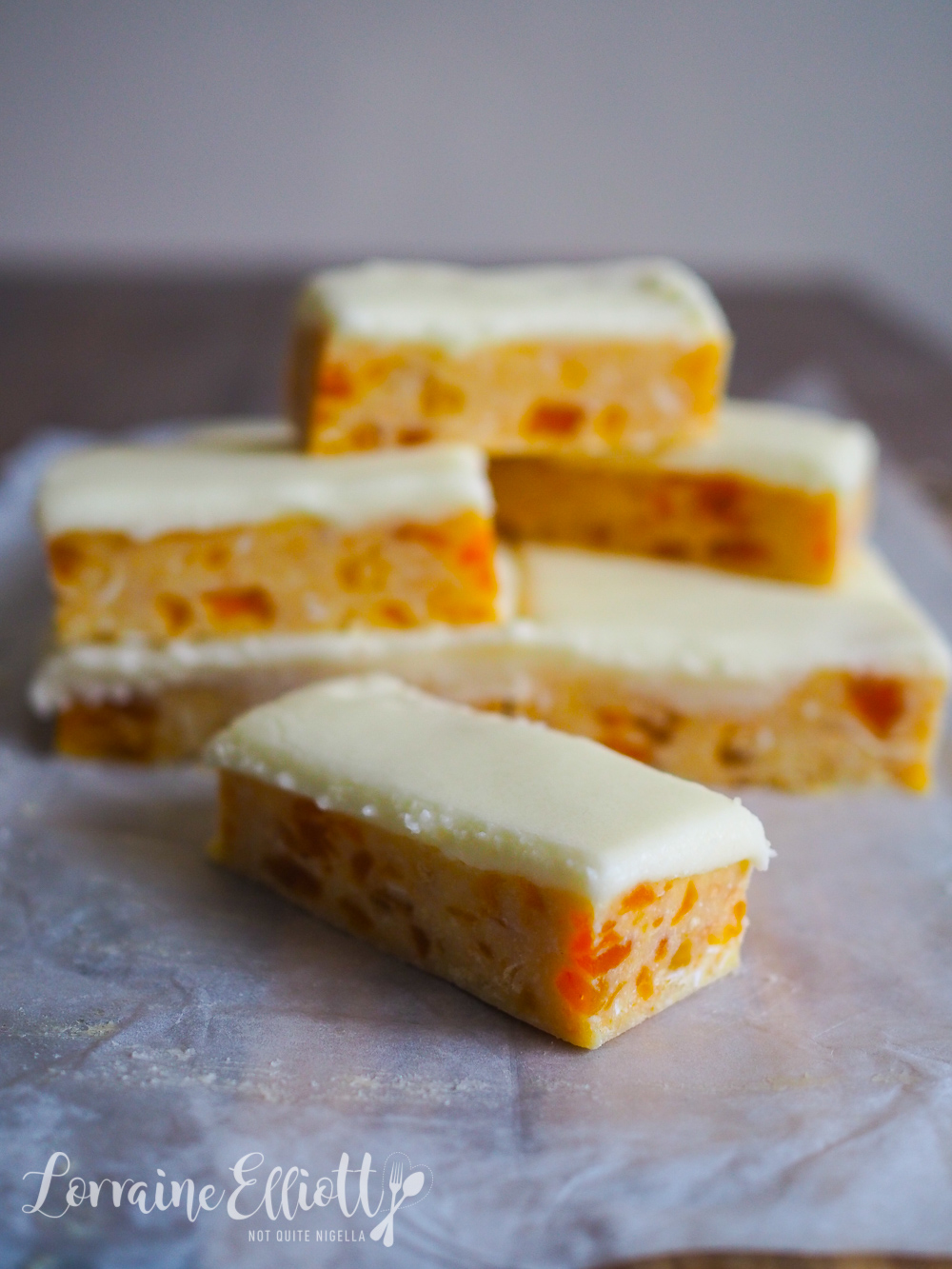 Slices were invented to feed crowds: Many say that slices were popularised because people needed to make something easy and could feed a lot of people. You could conceivably cut this into small inch squares and that can feed 24 people.

Many slices use shelf stable pantry ingredients: The pantry is your best friend when it comes to making slices. Slices use a lot of tinned condensed milk, pre-made biscuits, coconut and chocolate. 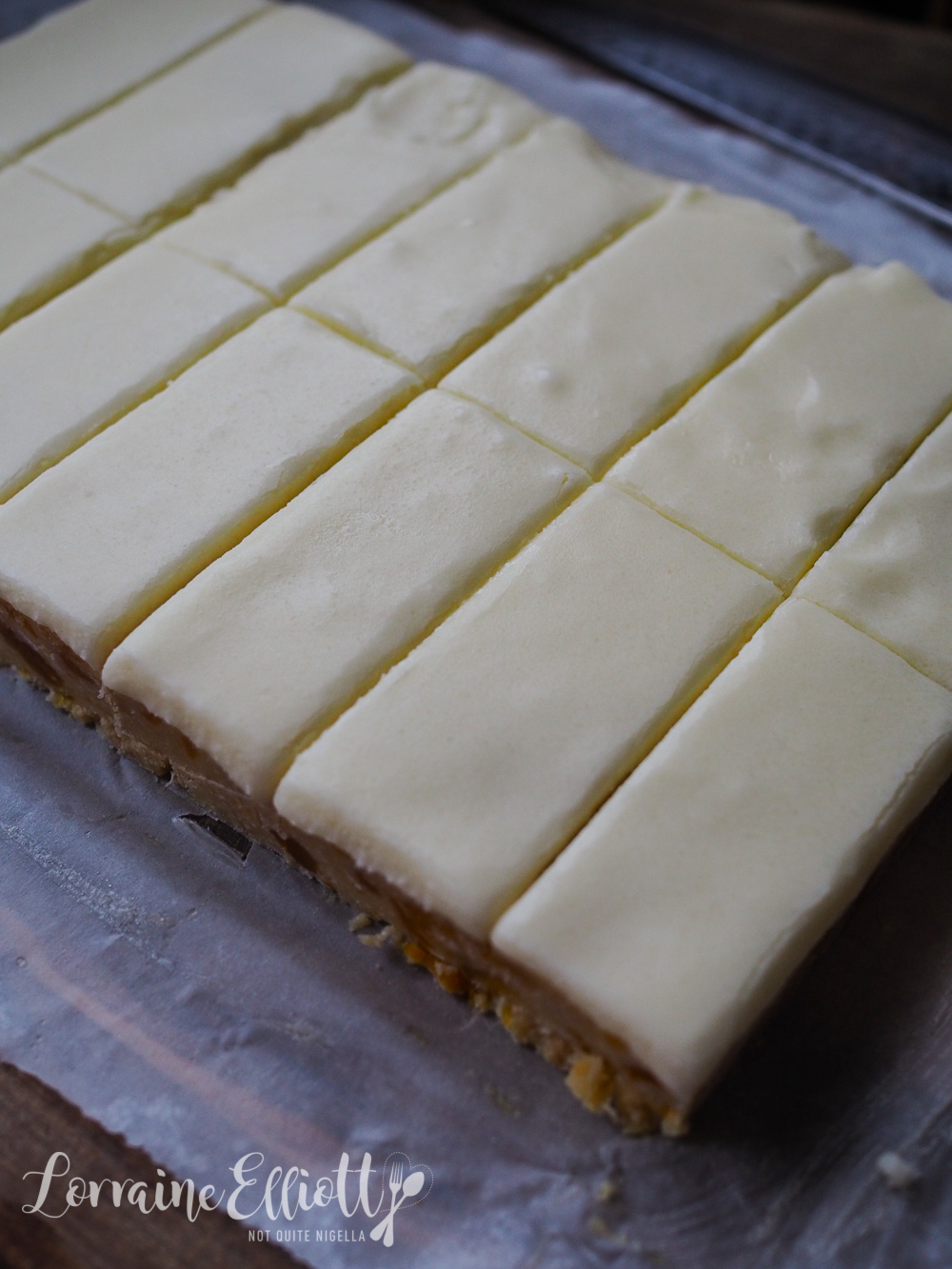 To Ice Or Not To Ice? You can leave this apricot slice un-iced with just a sprinkling of desiccated coconut which is best for those that don't want a lot of added sugar, or you can ice it. It's nice both ways and I think if anything the icing question is determined by how sweet you want it. Nic's mum's recipe suggested a coating of vanilla icing or you can also use dark or white chocolate.

Use a hot knife when cutting up slices. Before cutting cakes, I run a large chef's knife under hot water and then wipe it dry with a tea towel and then use it. This helps to cut chocolate and makes slicing easier.

Slices do tend to be on the sweet side. I love slices but can only eat a square of them. Mr NQN on the other hand can wolf down slices like his life depended on it. Honestly, you couldn't find two people more opposite in taste.

It can be a challenge when your partner is the polar opposite of you (for any Myers Briggs followers out there I'm an ENFJ and he's an INTP). You can look at it like you're complementary but sometimes it really clashes. We had an enormous fight one day after I put out things for charity. I love to clean things out because I hate clutter as it clutters my mind and I always think that objects can be put to better use. But he comes from a long line of hoarders and he loves to build up a big stockpile of things be it junk mail or clothes. 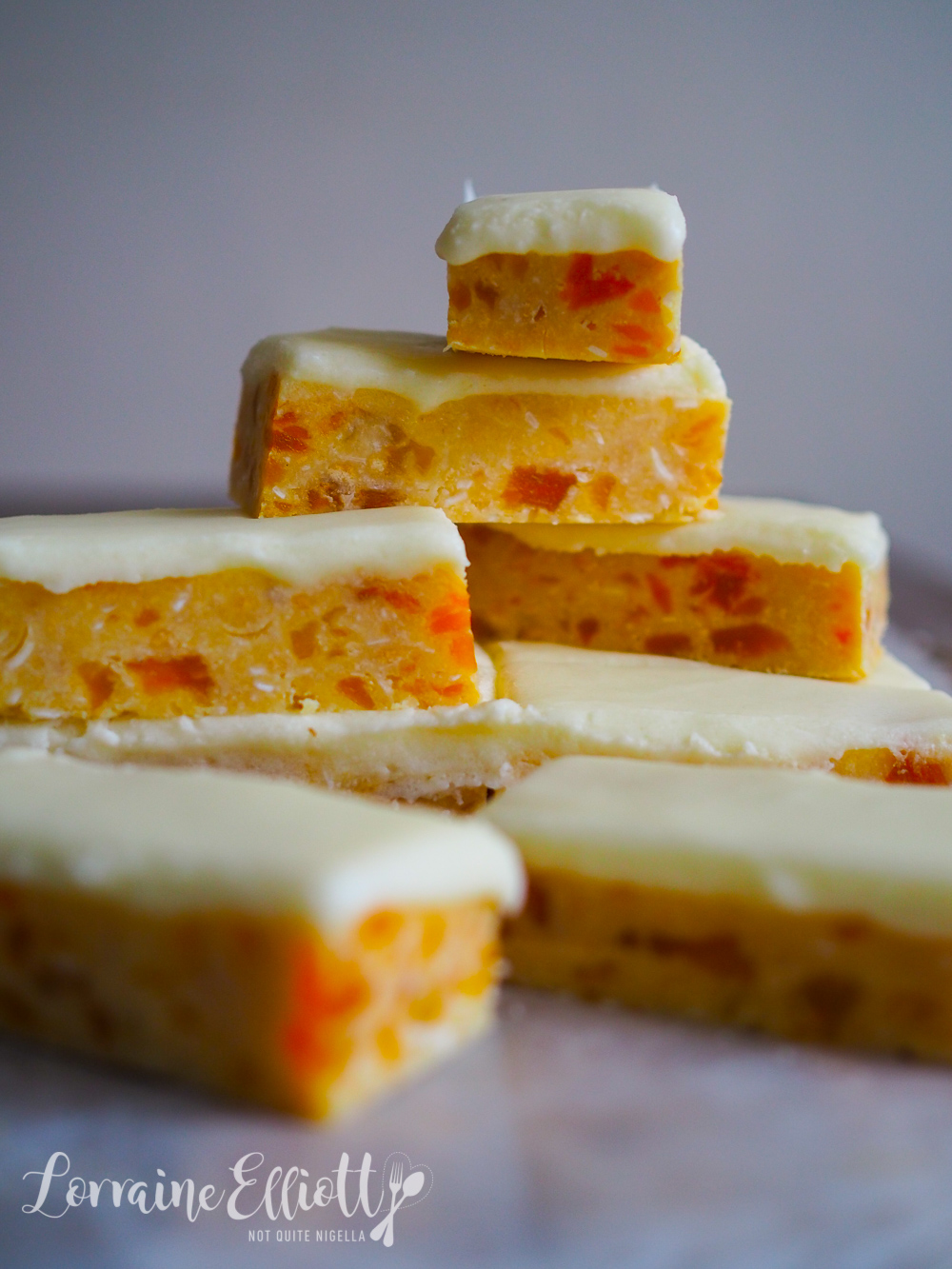 I asked him to drop off some plates at the charity store and he came back fuming. "Did you know that I've been looking for this plate for the past few days?" he said brandishing a small plate. We use it to cover Teddy's bowl of food in the fridge when he doesn't finish what he's eating.

I was cooking and thought he was joking at first. But then I saw how mad he was. "Are you actually kidding?" I said confused. It prompted a full on screaming match over a little plate. Divorce lawyers and marriage counsellors were almost called. We didn't speak for the rest of the night and I rued the day that we got married.

The next morning he made amends and we agreed that if I wanted to throw things out I'd run them past him. He obviously has some sort of emotional attachment to objects and I wasn't seeing it. I think he was also a bit embarrassed about his reaction. Especially as we found the other plate, the one he was referring to, in the bottom drawer of the dishwasher waiting to be washed!

So tell me Dear Reader, are you a hoarder or a cleaner? Do you have a favourite type of slice? 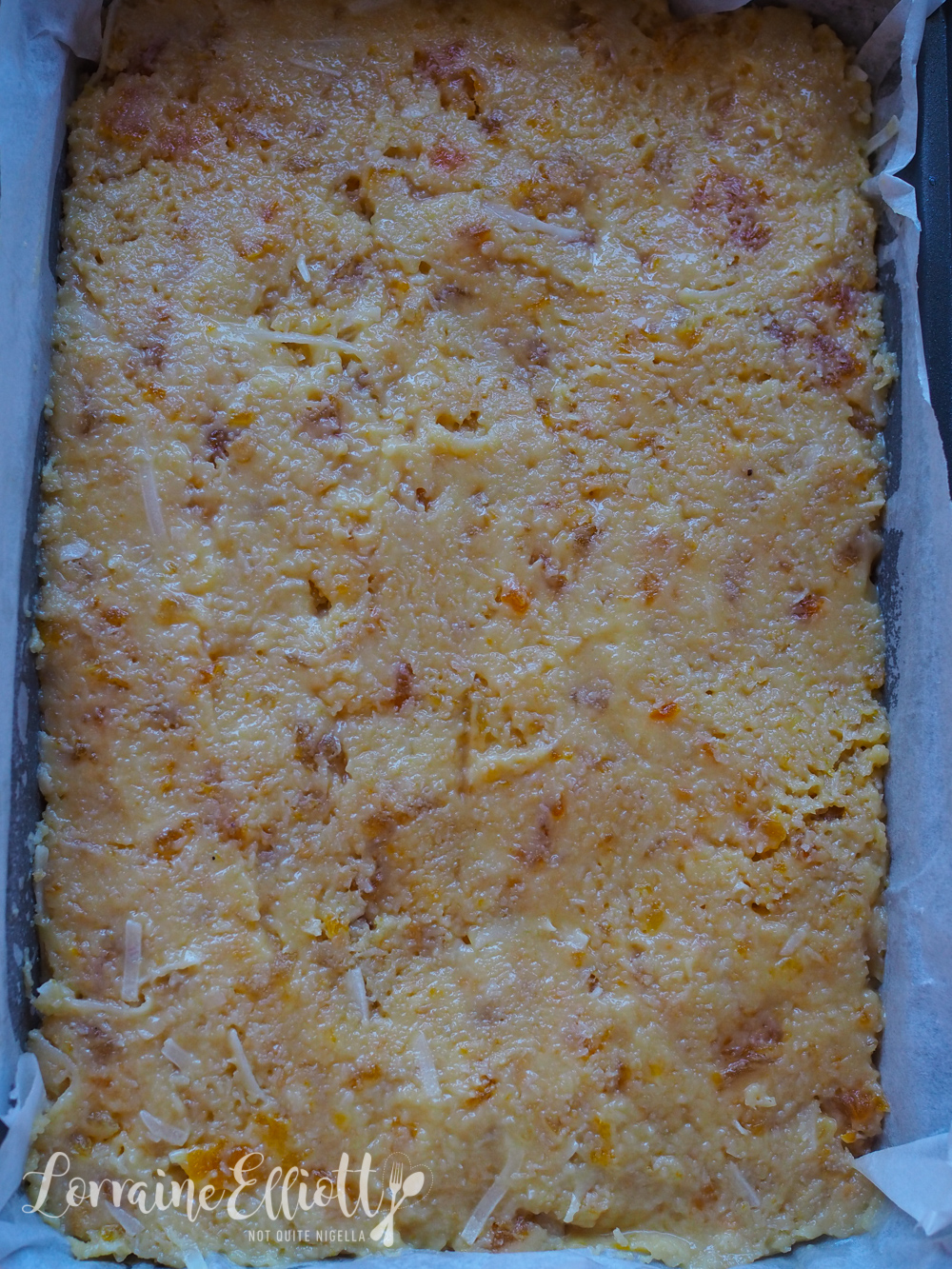 Step 1 - Line a 26x16.5 cm/10.4x6.4inch baking tray with at least 1 inch sides with parchment. Process the biscuits until fine in texture and place in a large mixing bowl. Add the apricots, coconut, condensed milk, melted butter, vanilla and salt. Press into the prepared tray and chill. 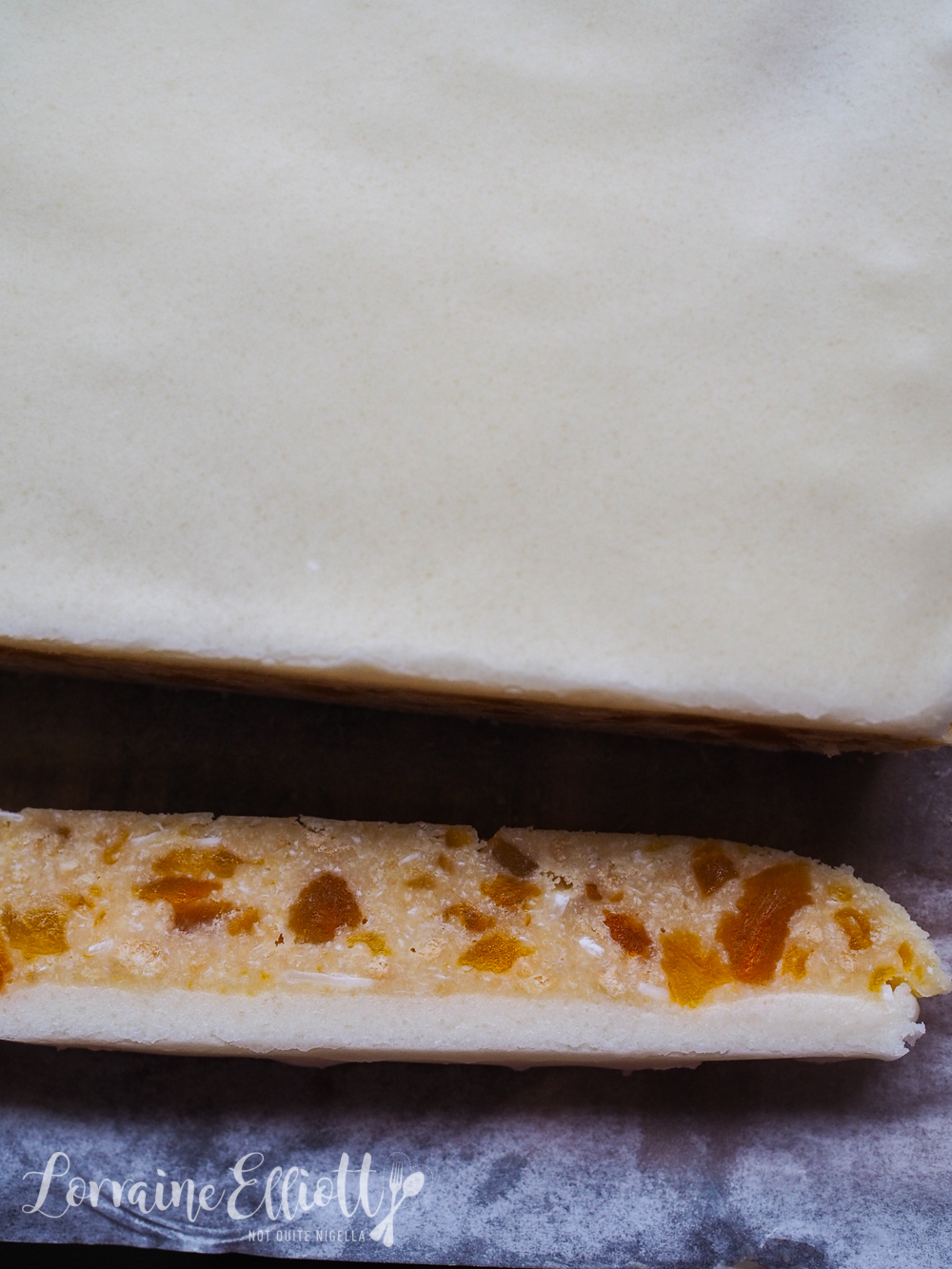 Step 2 - Melt the chocolate and coconut oil together and then spread over the slice. Refrigerate to set and then slice up into logs or squares. 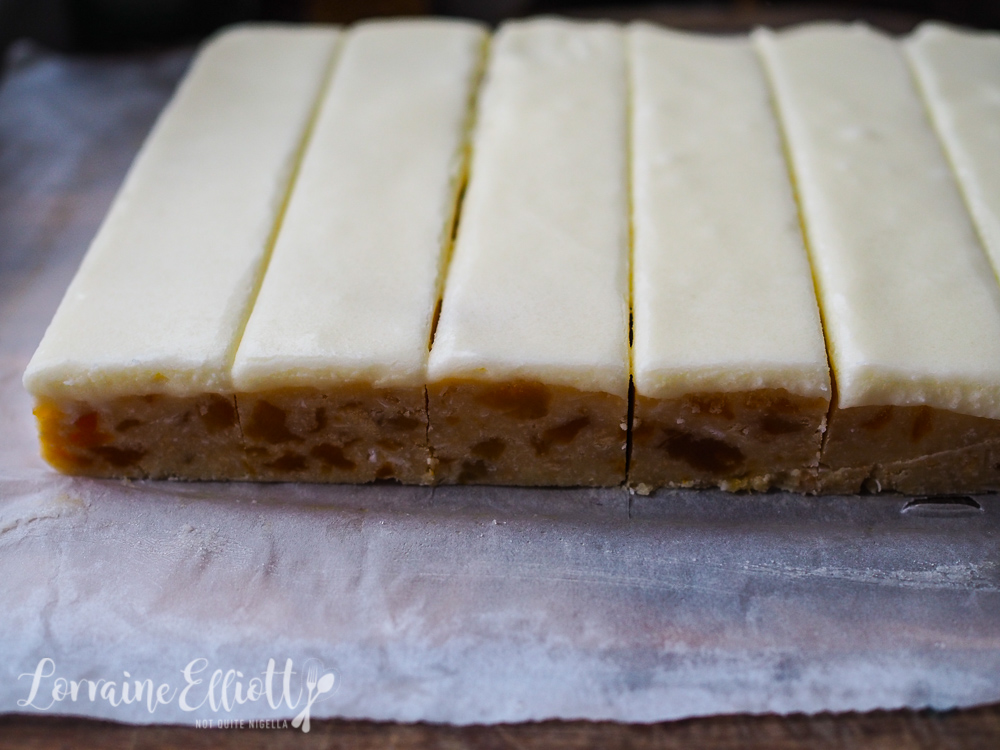 Note: I used a little bit of shredded coconut because I didn't have quite enough desiccated coconut. I also used a different icing in the picture but I feel like the white chocolate icing suited it better.