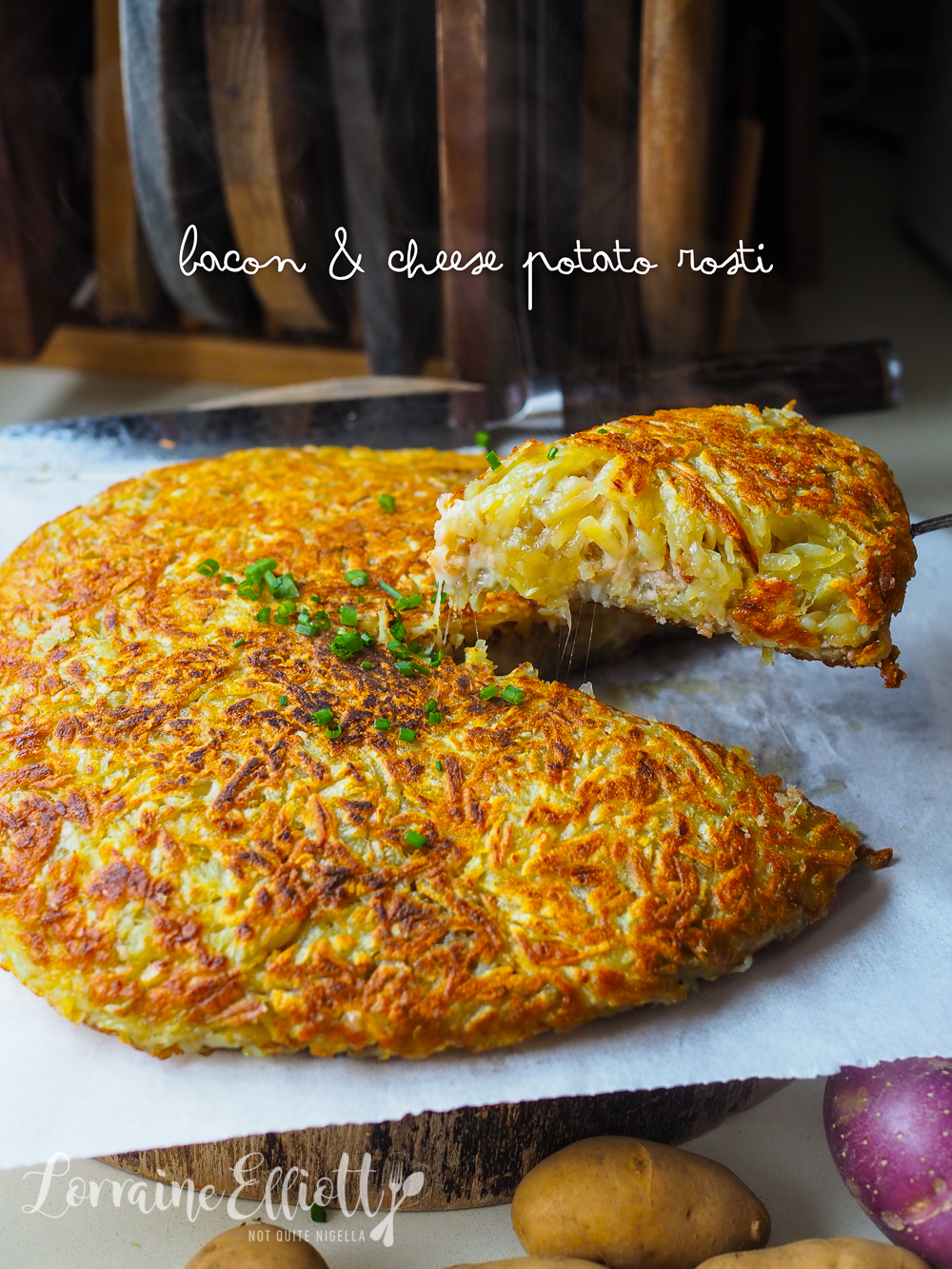 This crispy edged potato rösti has a gooey bacon and cheesy centre! Rösti is the perfect comfort food and it's only got a few ingredients! Fill your potato rösti with bacon, halloumi and mozzarella for a wonderful melty centre. It's much easier than you think and makes for a wonderful meal in itself. Dear Reader this is definitely a pushy recipe and I hope that you'll make this for yourself!

I have to admit that I found the idea of making potato rösti intimidating. I always thought that you'd need a special pan or a lot of butter or oil to make it delicious. But at its simplest did you know that it just has three ingredients: potatoes, butter and salt? I added the bacon and cheese layer as I had some cheese and a block of halloumi and some mozzarella that needed using and do you know what? It was AMAZING. I loved that it was delicious but not greasy at all-you can probably see that it isn't oily from the pics. 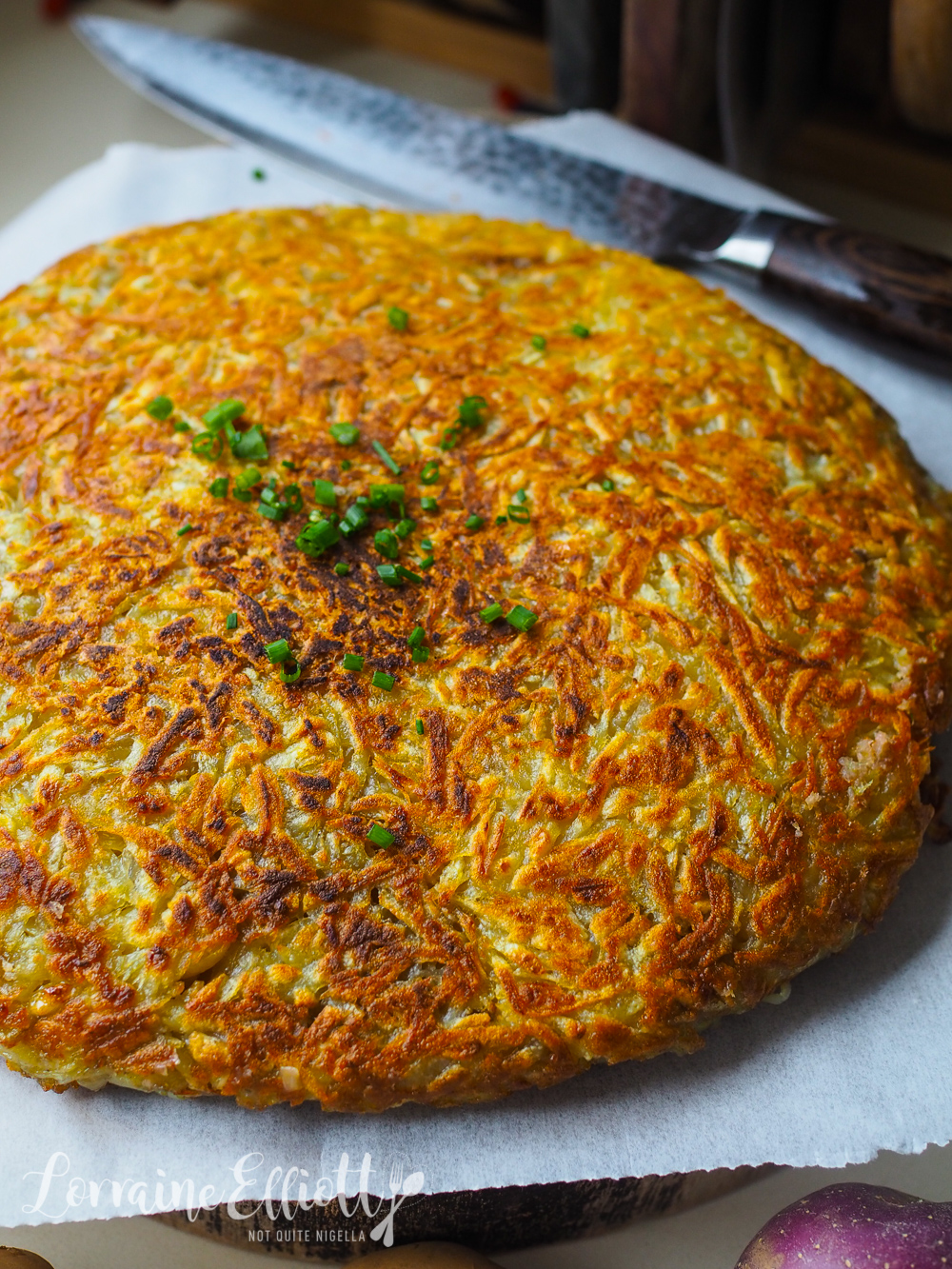 Rösti or Röschti is a Swiss dish that hails from Bern although it is eaten all over Switzerland nowadays. Farmers needing fuel for a day's work would to eat it at breakfast and it can be eaten as is or served with Leberkäse, smoked ham or sausages. Rösti is like a cousin of the hash brown although hash browns are crispier and shaped individually whereas rosti is usually prepared in a large skillet. 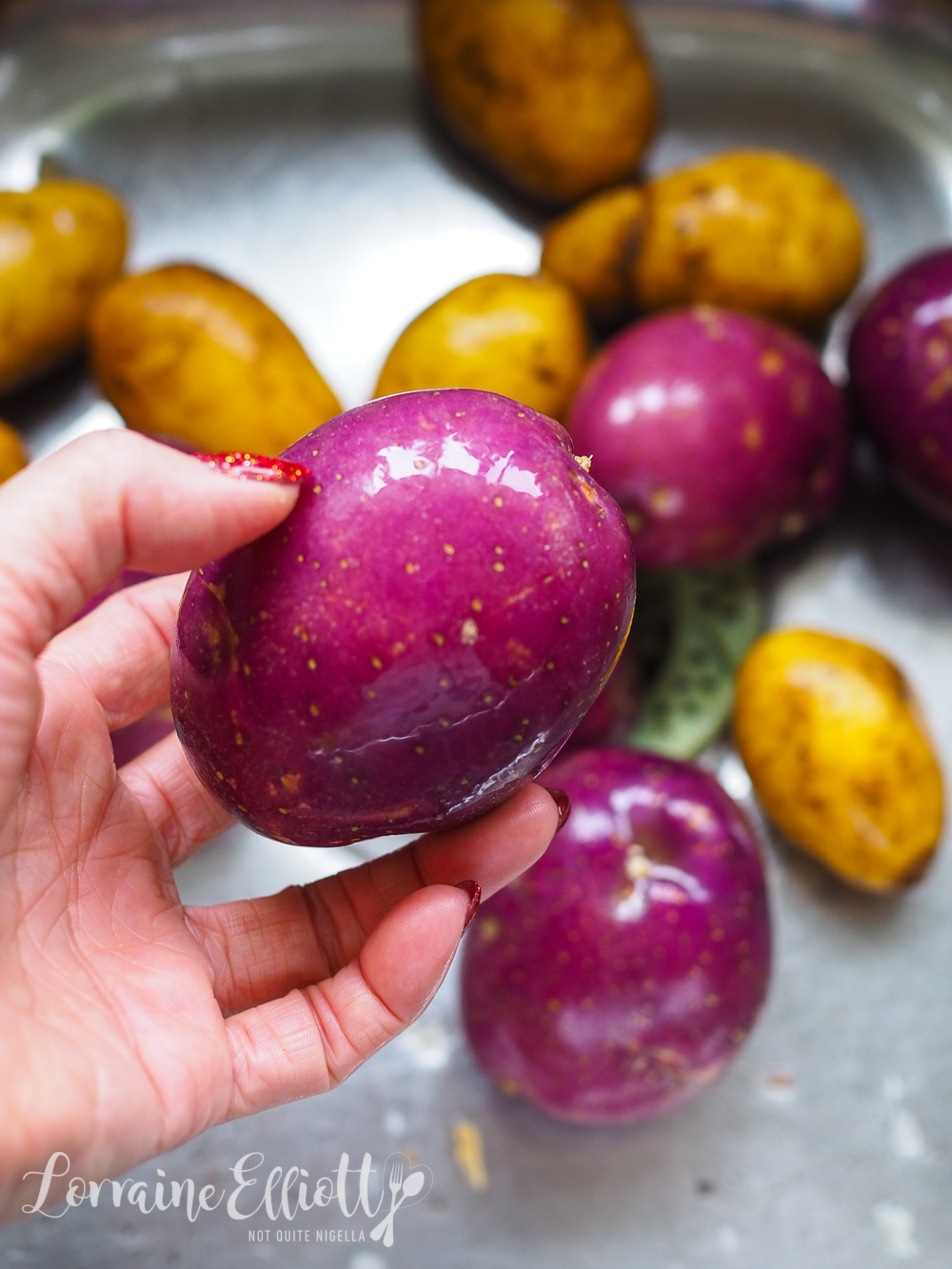 Which potatoes make the best rosti? I have made this six times over the last two months and used Dutch cream, Sebago, Russett and Royal Blue potatoes to make this and they were all fantastic. A lot of people talk about waxy vs floury potatoes but I find that most varieties that you find at Australian supermarkets or fruit markets are mostly good all rounder potatoes. They also aren't usually marked with the variety name. I just know the specific names of mine because I get organic potatoes from my vege box guy and he lists the varieties.

Twice Cooking the potatoes: This isn't to make things difficult I promise. Rösti recipes sometimes call for the boiling of potatoes, grating them and then the frying or use raw potatoes. Over the six times that I've made this, I feel like this method frying both times produces the best rosti.

I also prefer this method because you don't have to wait until the potatoes are cool to grate them and you can just use the one frypan. The first frying is just to cook the potatoes. The second fry is to shape and crisp the potatoes to form a cake and that step makes it utterly delicious. Don't worry if the potatoes turn pink after grating them. Once they cook they'll turn yellow or white again. 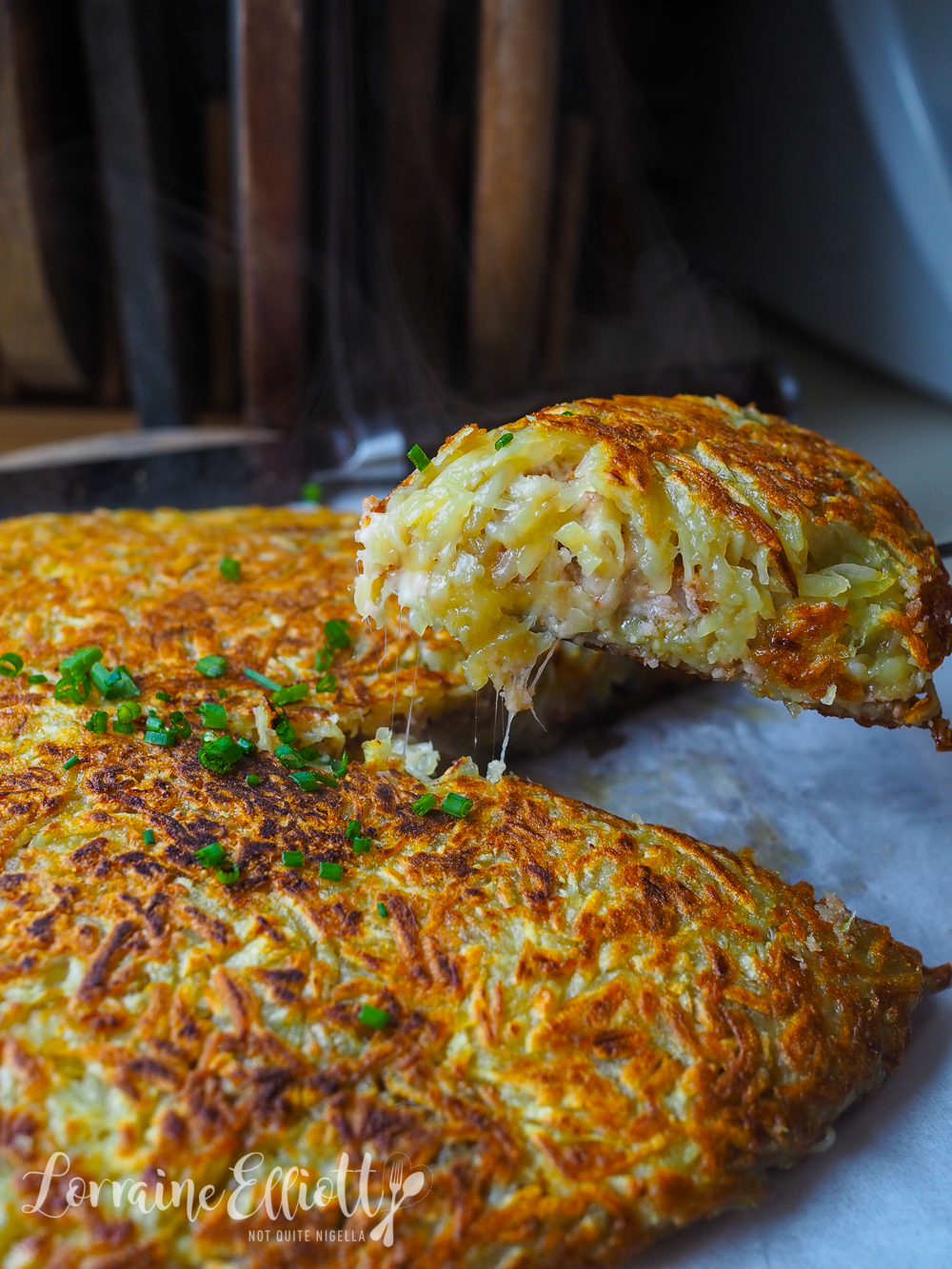 Seasoning I used a Fondor seasoning salt but you can also use chicken salt too or regular salt. Potatoes do need quite a bit of seasoning so I use 3 teaspoons seasoning for the whole rosti.

Flat round metal tray (I used a metal pizza tray). You can also use a large platter.

Tips to make the best rosti: 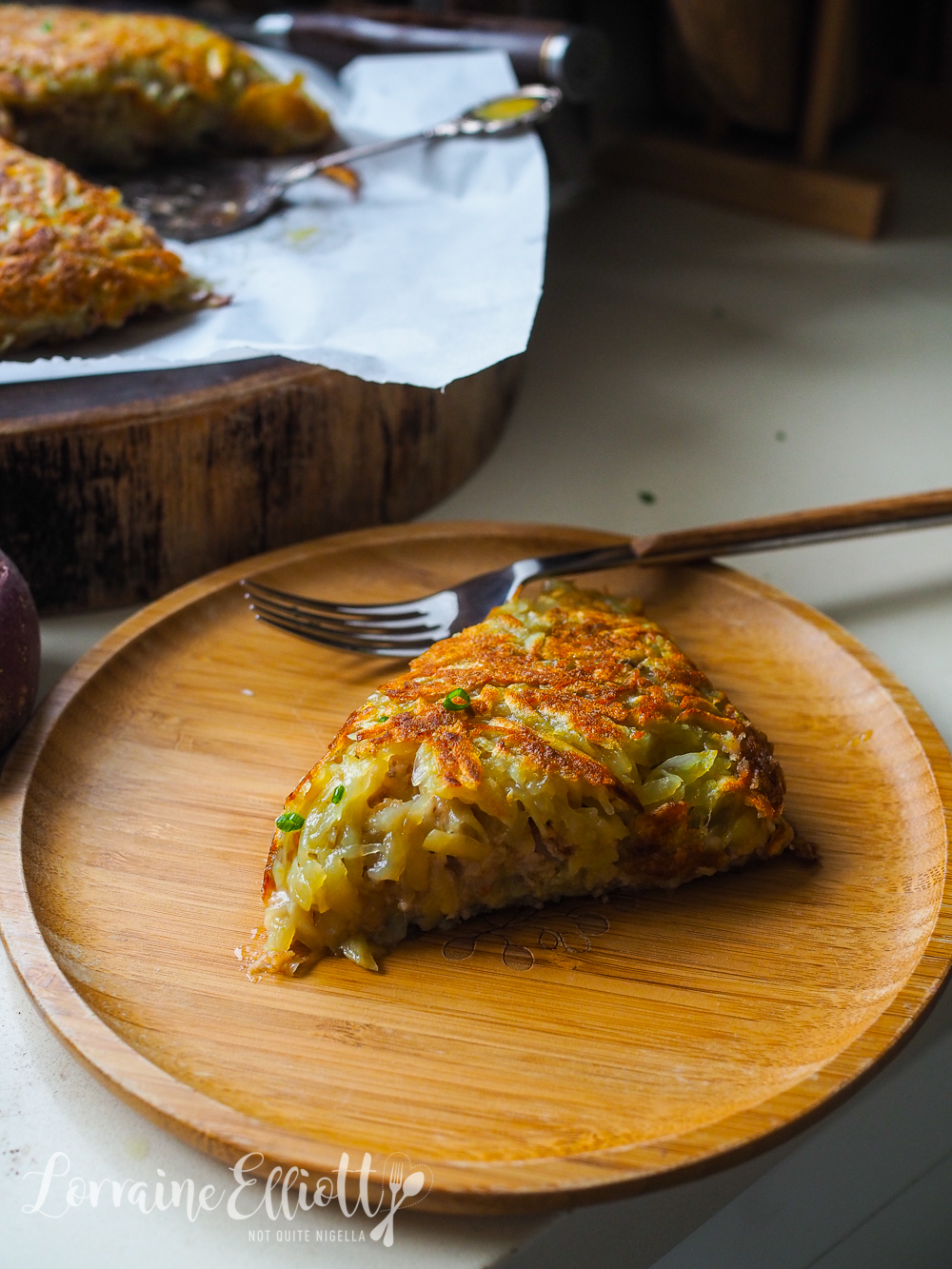 I don't know about your Dear Reader but I have no idea about what's happening with COVID-19. I think a lot of us thought that we might be on the way to being in the clear. In the last few weeks since things have started to open up I've done a few things that go on my first overnight trip as well as do things like doctors appointments for things like skin cancer checks.

I was waiting for my doctor and I got to chatting to the receptionist. We talked about what we had been doing during the voluntary lockdown and she said that she had to move apartments and that made things even more stressful.

She and her boyfriend asked her landlord for a bit of a break in the rent in exchange for the improvements that they had made. They figured that with only one income and the fact that the landlord had never made any improvements himself might mean he was amenable to it. However the landlord decided that he was going to instead increase the rent. This put the apartment out of reach for them so he evicted them. This seemed very illegal, or at the least immoral but the story has a twist.

It turns out that this landlord has quite a history with tenants. After they first moved in, a former tenant slipped a note under their door warning them of the terrible landlord and his predatory behaviour. They had actually gotten this idea from the previous tenant before them and it turns out that there is a long list of tenants who have left similar warning notes after being evicted. 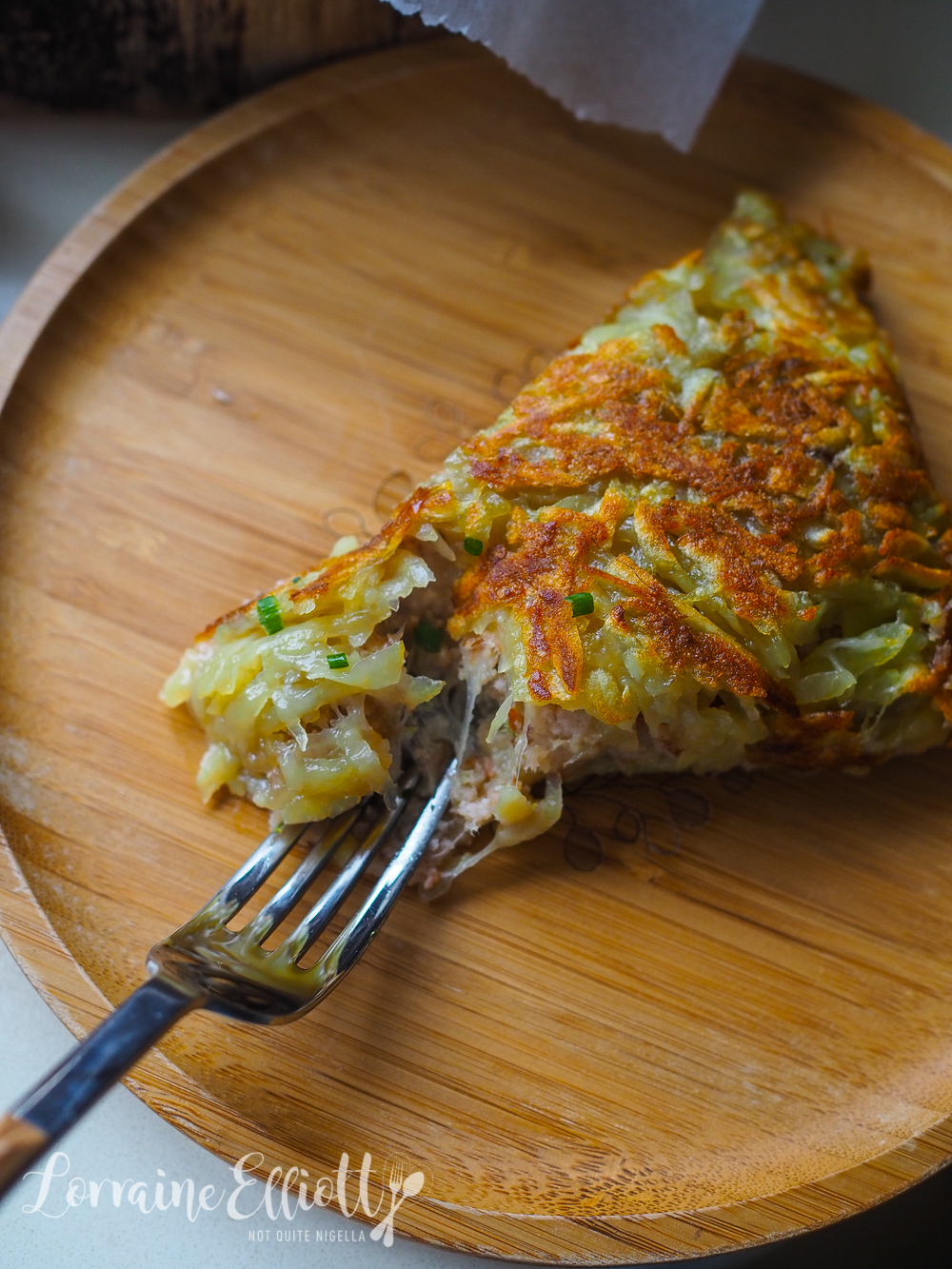 I asked her why people rented from him and she explained that it was a bit cheaper than similar properties in Bondi Beach. Although it was rather decrepit, it was also pet friendly. Ironically, she saw that the property is listed for rent again, but at the original price before the new price increase! For now she is waiting for the new tenants to move in so that she can slip a note under their door...

So tell me Dear Reader, do you like rosti? Have you ever tried a version stuffed with potato and cheese? 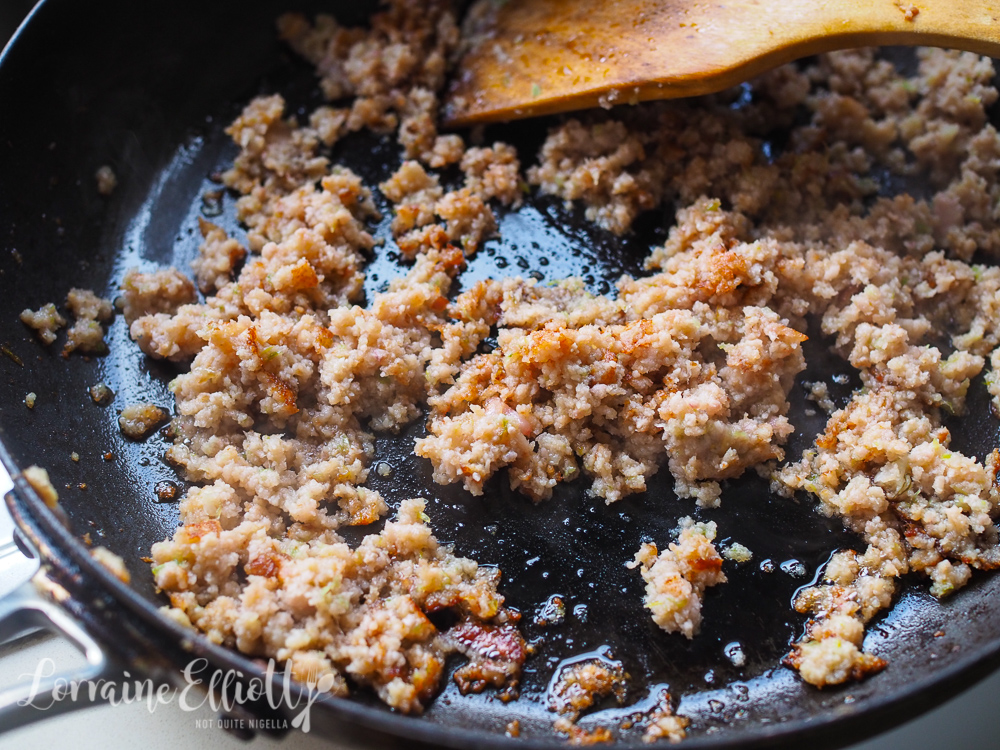 Step 1 - I use a 28cm/11inch frypan or skillet for this. First fry the bacon and onion in a little oil until crispy and aromatic. Set aside and clean the frypan. Toss the bacon with the grated cheese.

Step 2 - Peel potatoes, cut out the eyes and then grate into a bowl lined with 4 paper towels to soak up the liquid or over a fine sieve. Heat up frypan and add a couple of tablespoons of oil and fry the potatoes in three batches on medium heat. They will turn from pink to yellow-you want them cooked but not necessarily browned but make sure that they are cooked through by tasting a little of the cooked potatoes for doneness. Add oil when necessary. Place each batch of the cooked potatoes in a bowl and season each batch with chicken bouillion or Fondor. 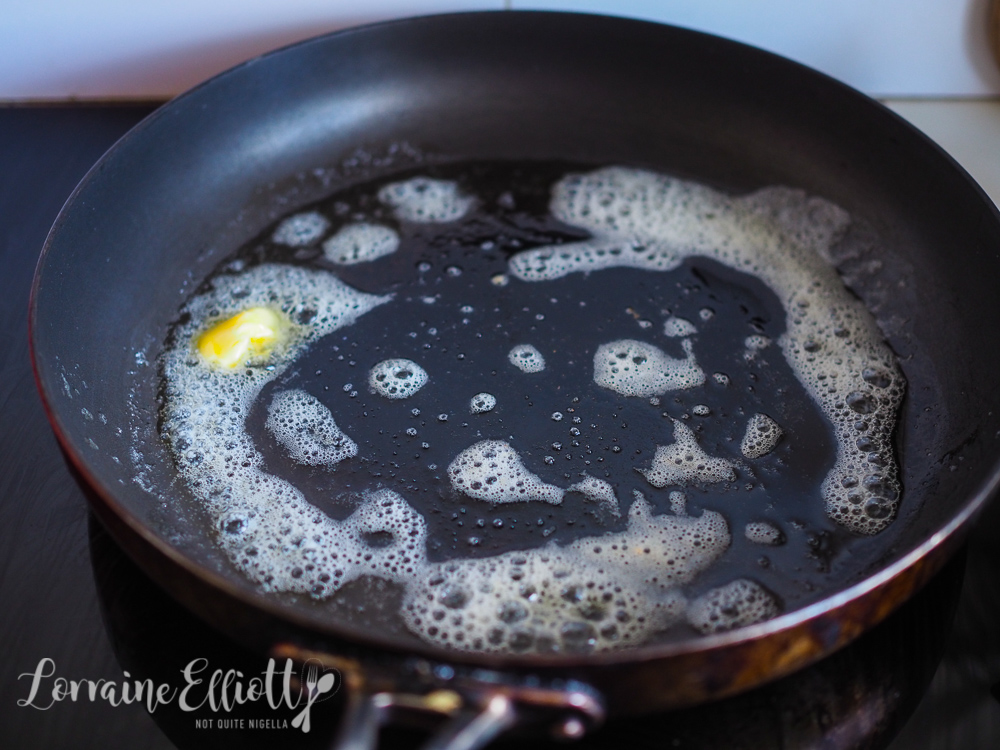 Step 3 - Wash and dry the frypan and then heat on medium high (6 or 7 out of 10) and add half of the butter and 3 tablespoons of oil to the pan. Add two thirds of the potato mixture and press down gently so that it forms a tightly packed cake but add more potato on the sides. Add the cheese and bacon mixture in the centre and then top with the remaining potato sealing up the cheese. Tidy up the sides with your turner so that you get a nice round shape on the edges and press down on the potatoes with an angled spatula so that it is tightly bound. Set the timer for 10 minutes and when it is looking nice and golden place a plate on top of the rosti and then gently flip it over. It should be nice and golden on the upturned side. 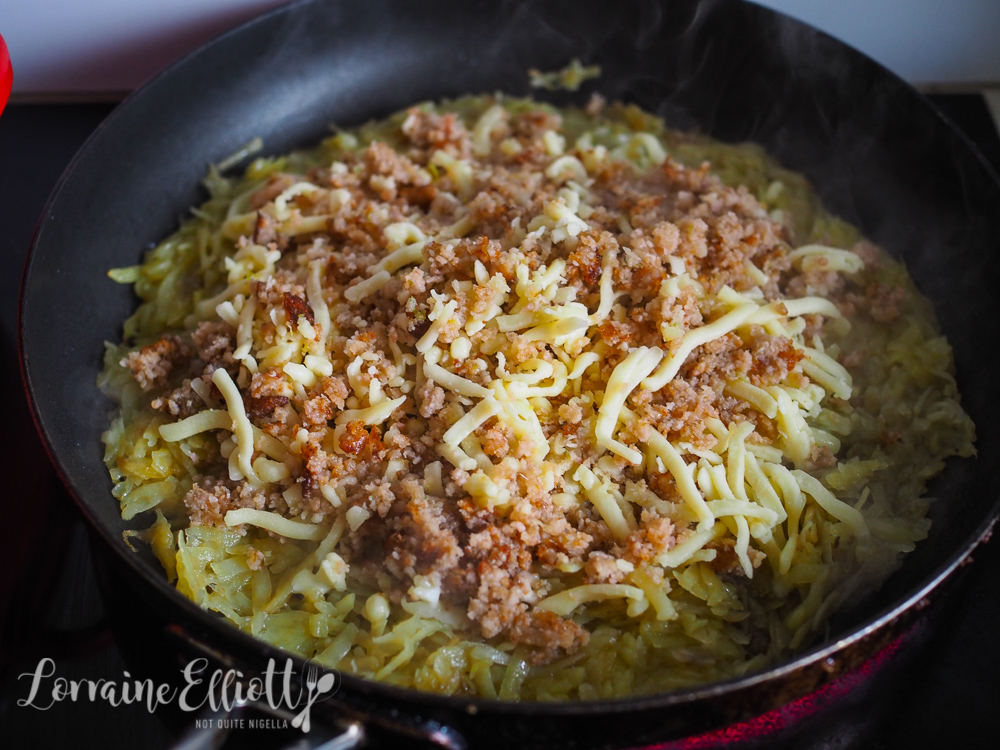 Place two thirds of the potato mixture into the pan and the top with bacon, grated halloumi and mozzarella 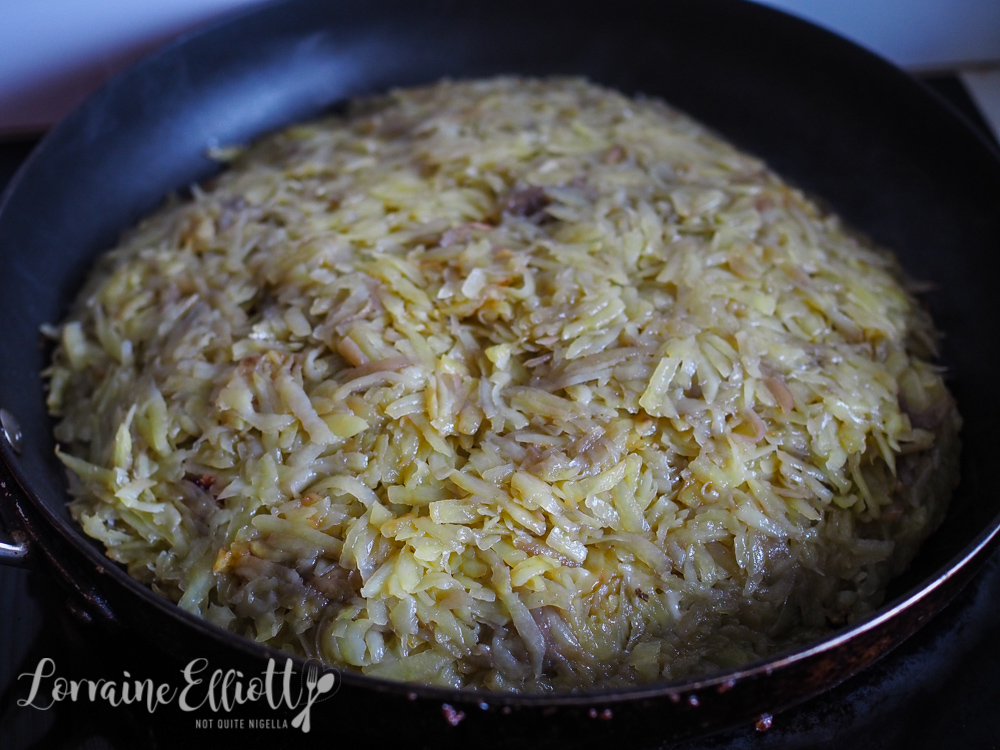 Step 4 - Add the remaining butter and some oil to the pan to coat the surface and slide the rosti onto the pan so that the uncooked side hits the pan. Cook for 10 minutes until crispy and golden. To remove from the pan, use the metal tray again and gently upturn. Serve with chives and eat while hot so that the cheese is gooey. 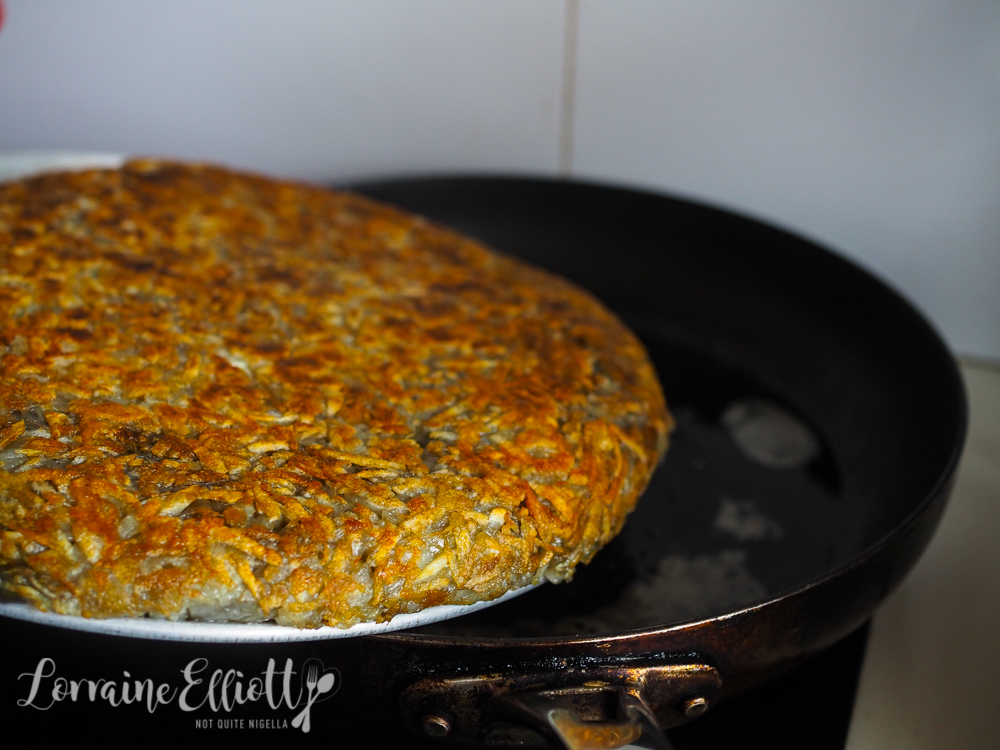 Sliding back into the pan but with the uncooked side down 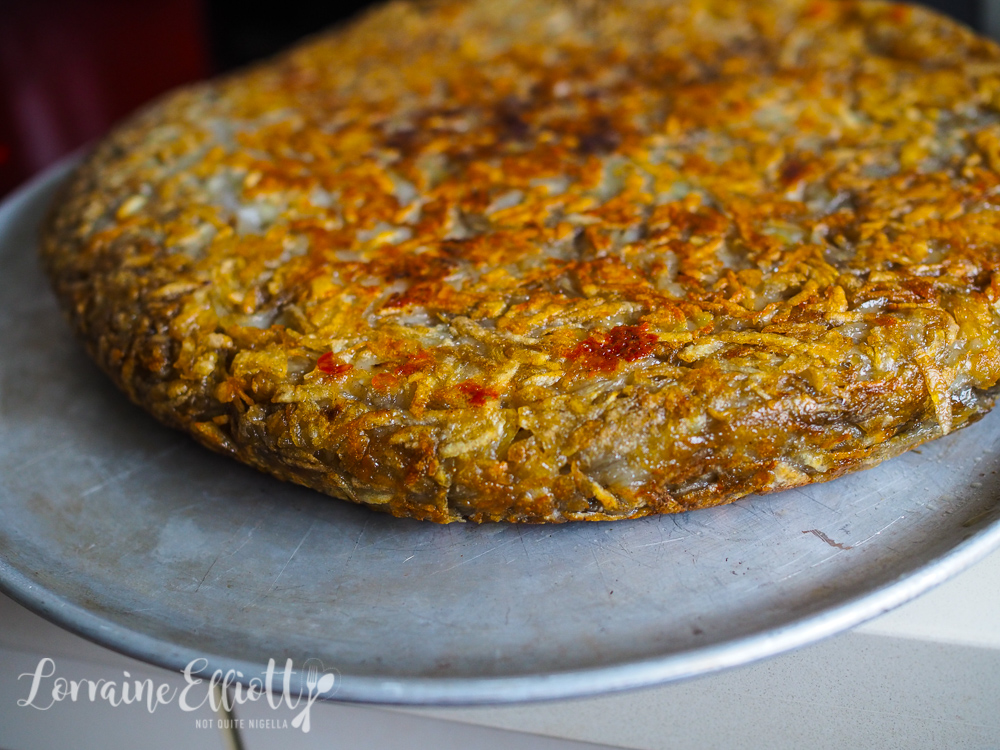 Crispy on all sides!