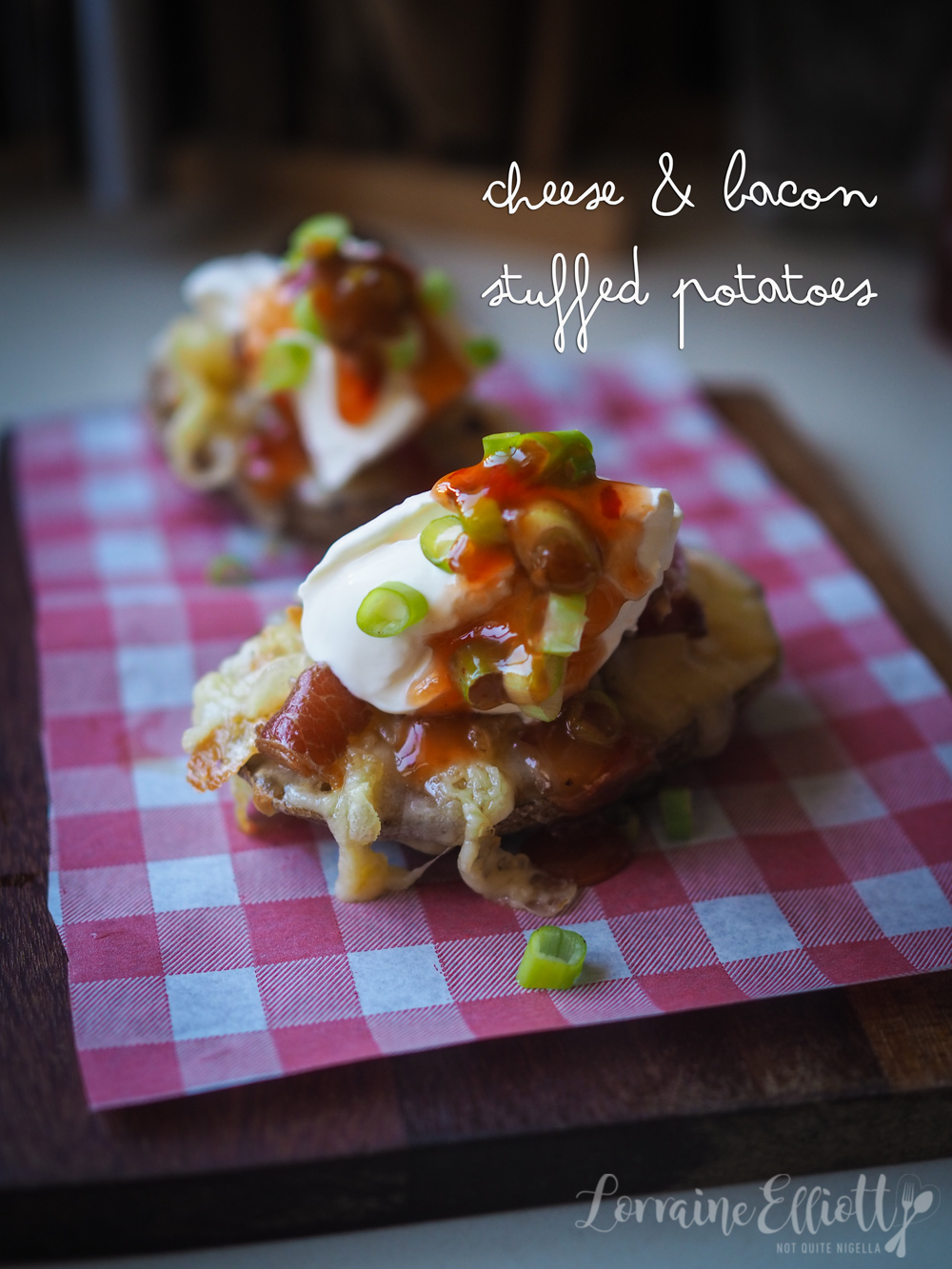 These Cheese and Bacon Stuffed Baked Potatoes is a simple but absolutely delicious way to serve up potatoes! Baked potatoes are hollowed out and mashed with crispy bacon and cheese and then topped with more bacon and melted cheese before a topping of sour cream mayo, spring onion and a drizzle of Thai sweet chilli sauce!

These are a version of stuffed potato skins and are simple to make and require no special equipment. They're really tasty and I'd count on serving two stuffed potatoes per person as the potatoes can be quite large.

Why par boil the potatoes? Potatoes that have been roasted or baked without parboiling have a drier texture whereas parboiling them gives them a slightly less dry texture. You can skip this step and just bake them but I much prefer the texture when they have been par boiled.

Other options: Add Mexican beans or chilli to make it vegetarian or replace the bacon with chorizo or pulled pork! 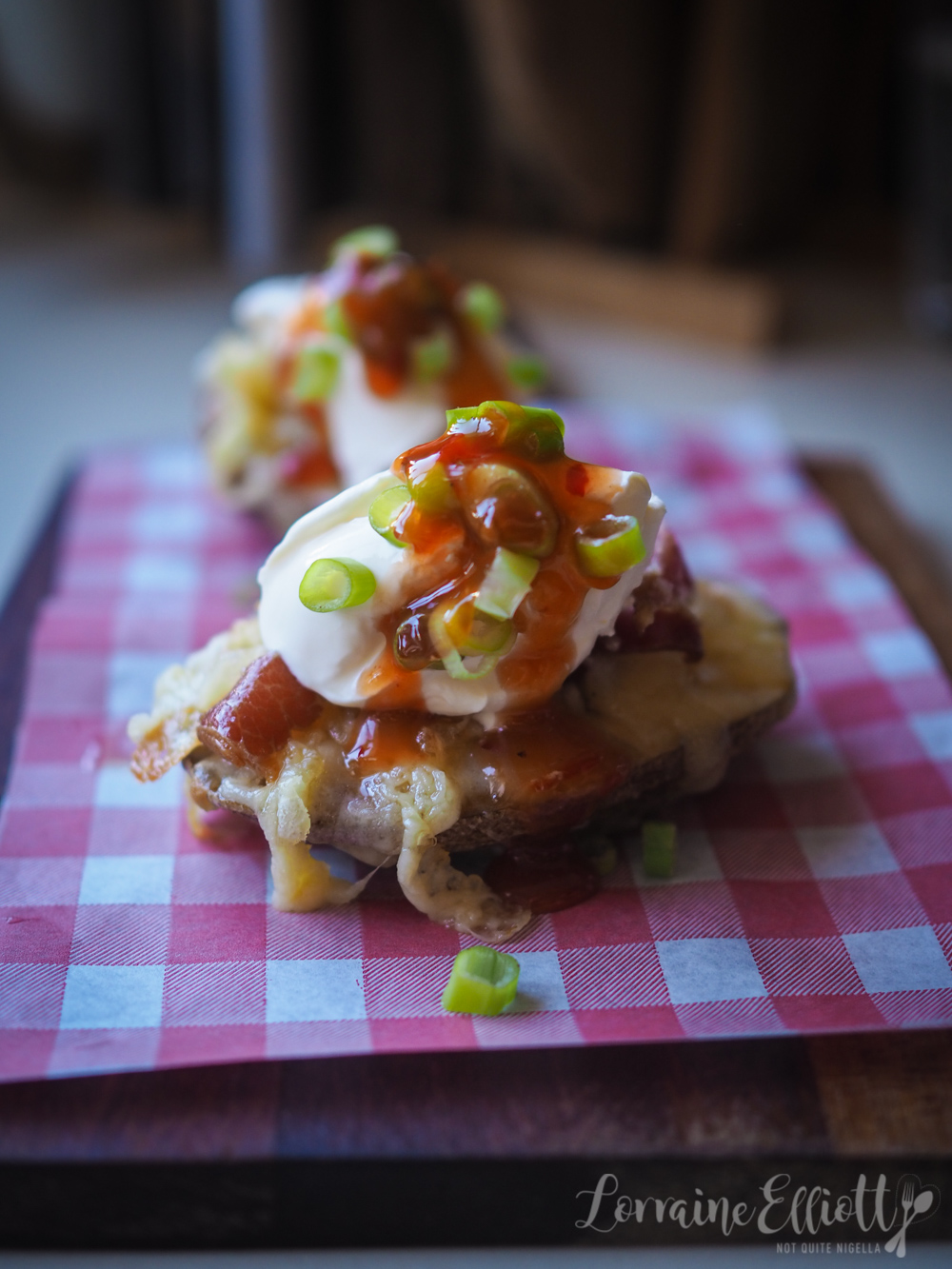 This is a simple recipe and an easy sell. When all of the ingredients are good by themselves (potatoes, bacon, cheese) you know that the whole dish will be good! One day I had made a batch of these bacon and cheese stuffed potatoes and left them on the kitchen counter to cool. You know how they say that the smell of bacon is irresistible? It sure is especially to a little boy called Teddy Elliott. I had left the house for appointments and Mr NQN was in the other room on zoom calls.

He heard a strange noise from the kitchen. Teddy was crooning at the potatoes in the most plaintive way possible. It was as if he were serenading them, trying to get them to come to him. Several times Mr NQN picked him up, carried him like a baby (the submissive pose to deter undesirable dog behaviour) and that usually does the trick but every time Teddy went back to loudly serenading the potatoes until Mr NQN had to put them away in the fridge. I mean Teddy has never eaten bacon but I think his instincts just tell him it will be tasty and he's right!

So tell me Dear Reader, is there one food whose smell you cannot resist? Do you 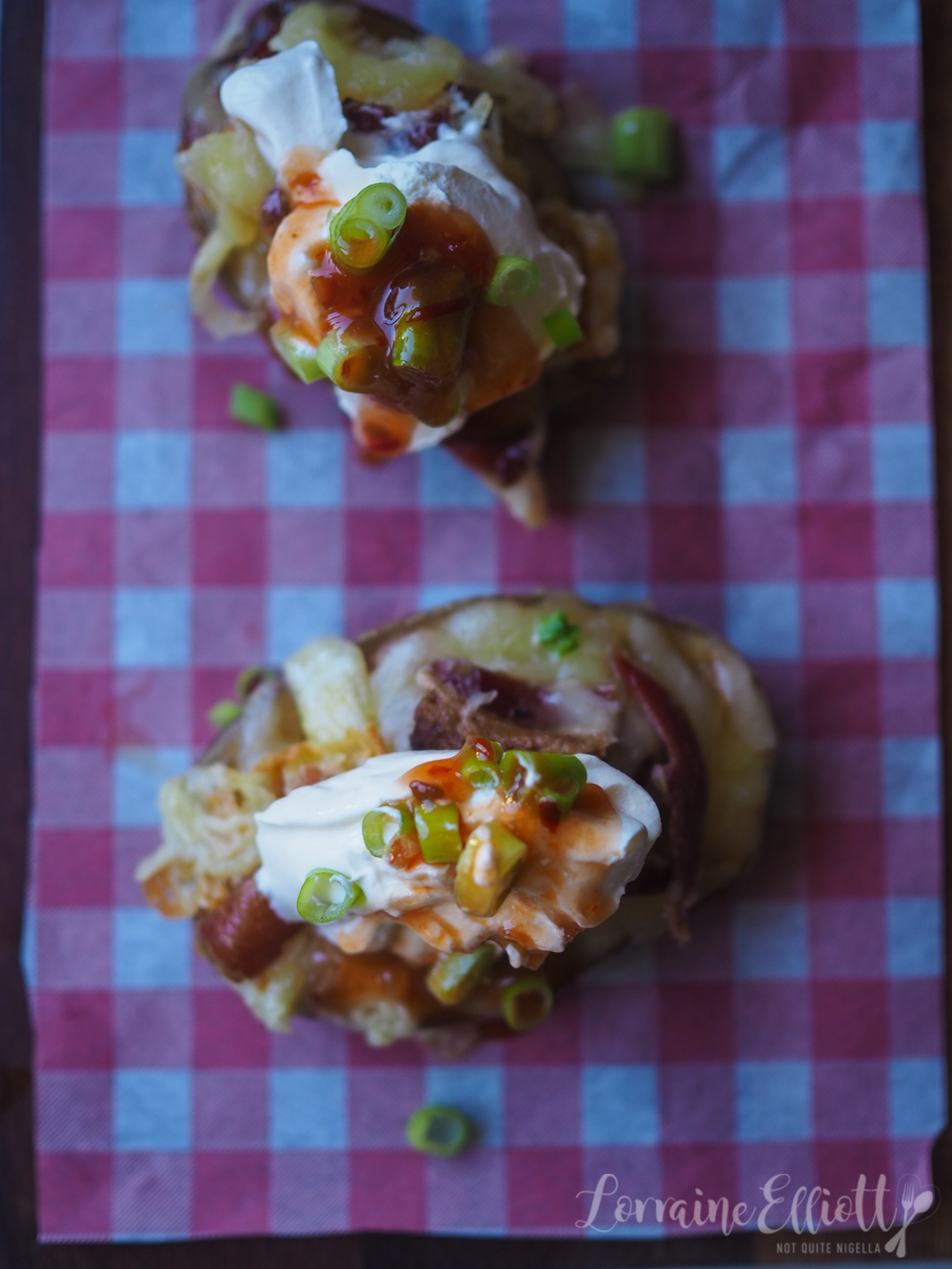 Step 1 - Preheat oven to 190C/374F. Wash the potatoes but do not peel and then cut in half. Par boil the potatoes for 5 minutes just to take the crisp edge off them. Then brush with oil and roast cut side up until cooked through and browned at the edges (around 30-40 minutes).

Step 2 - Place the bacon on a baking tray and add to the oven and bake for 20 minutes or until crisp. Once cooked, cool and crumble into pieces reserving the bacon fat. 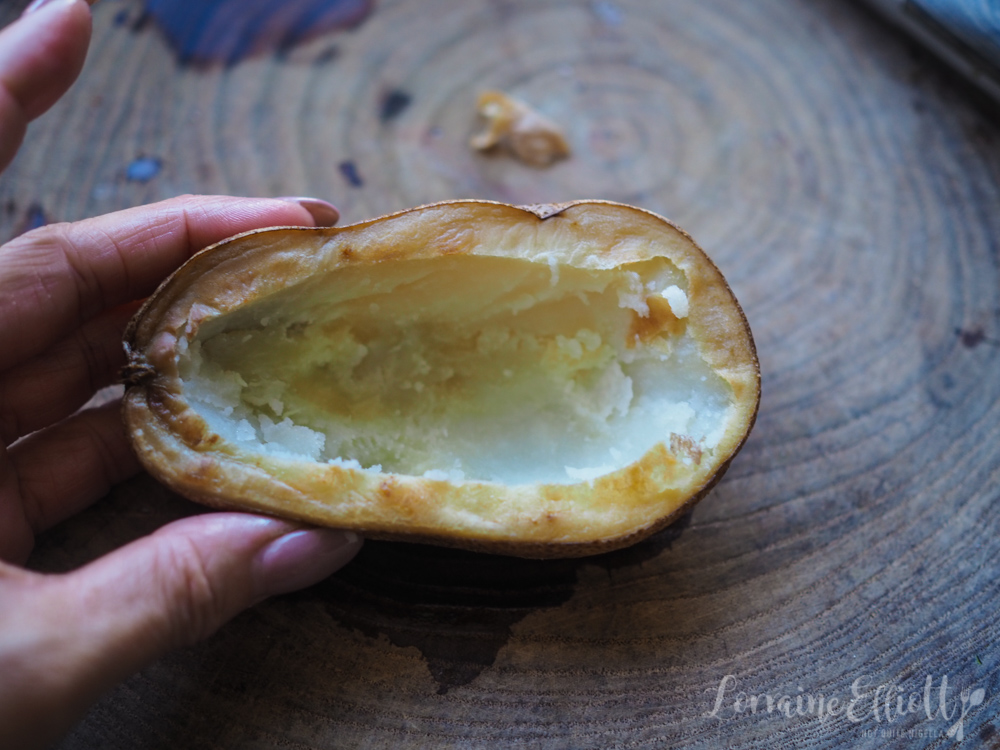 Step 3 - When the potatoes are done take a sharp knife and cut around the potato leaving a small border. You want to remove as much of the filling as possible within reason, without cutting through the skin or scraping the bottom. Take the potato flesh and mash in a bowl along with the bacon grease, 1/3 cup of mayonnaise, half of the bacon pieces and 1/2 cup of cheese. 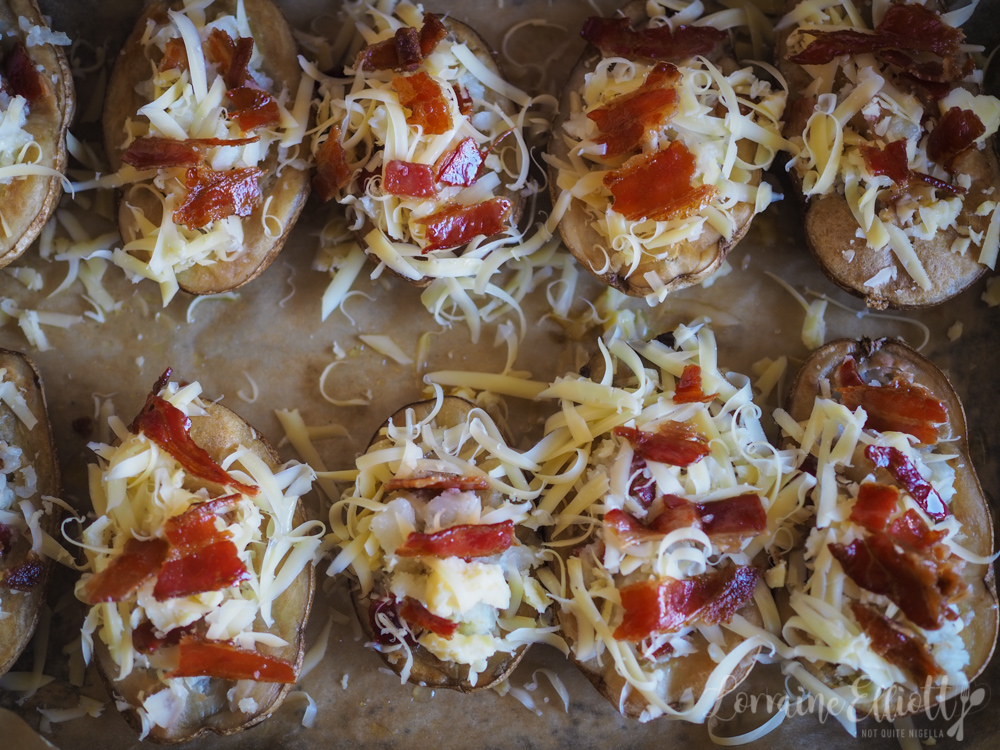 Step 4 - Stuff this back into the potatoes and top with the remaining cheese and bacon and bake for another 5-6 minutes or until the cheese has melted. Dollop sour cream mayonnaise mixture on top and sprinkle with green onions and drizzle with sweet chilli sauce. Season with salt and pepper. 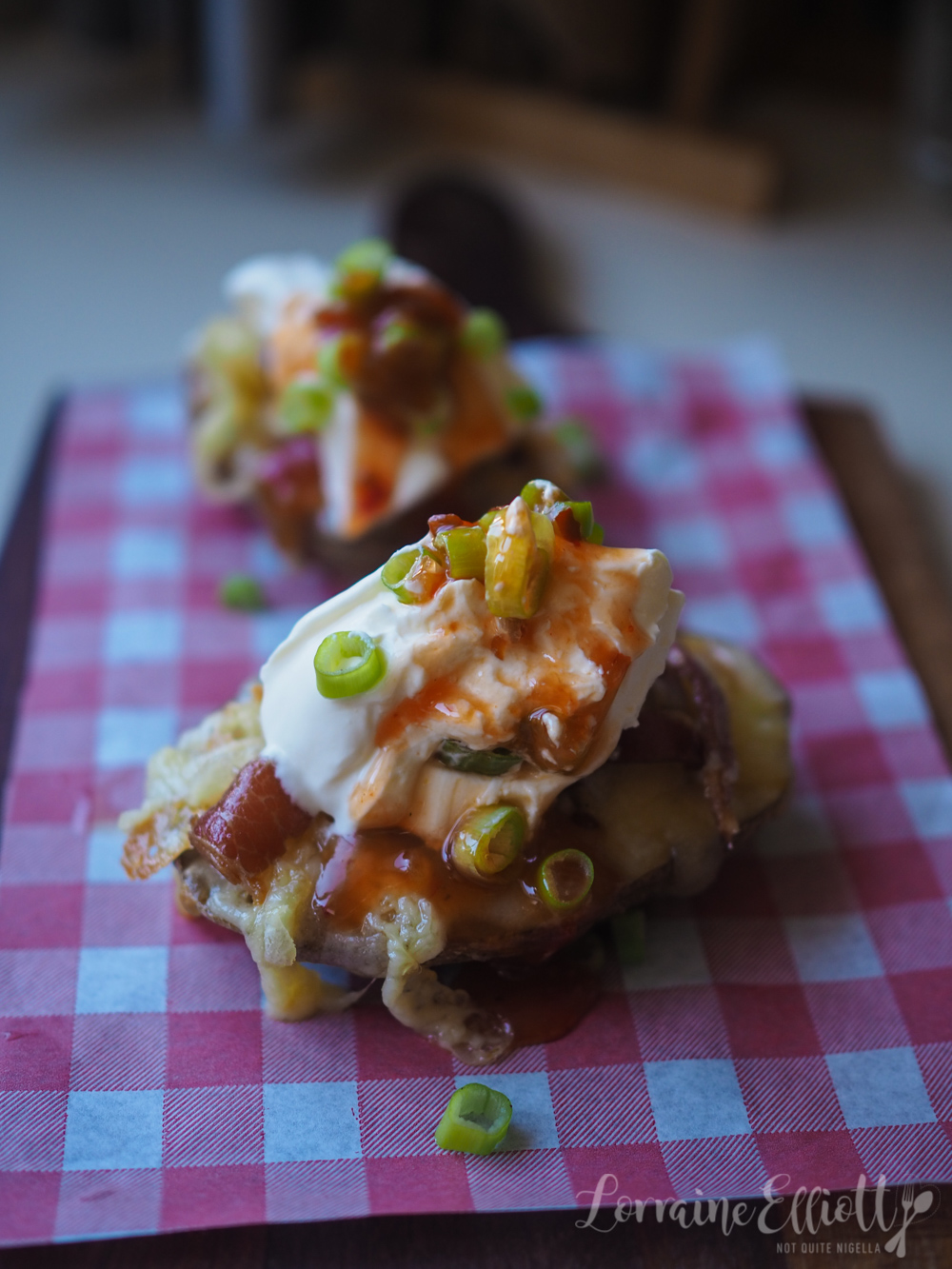