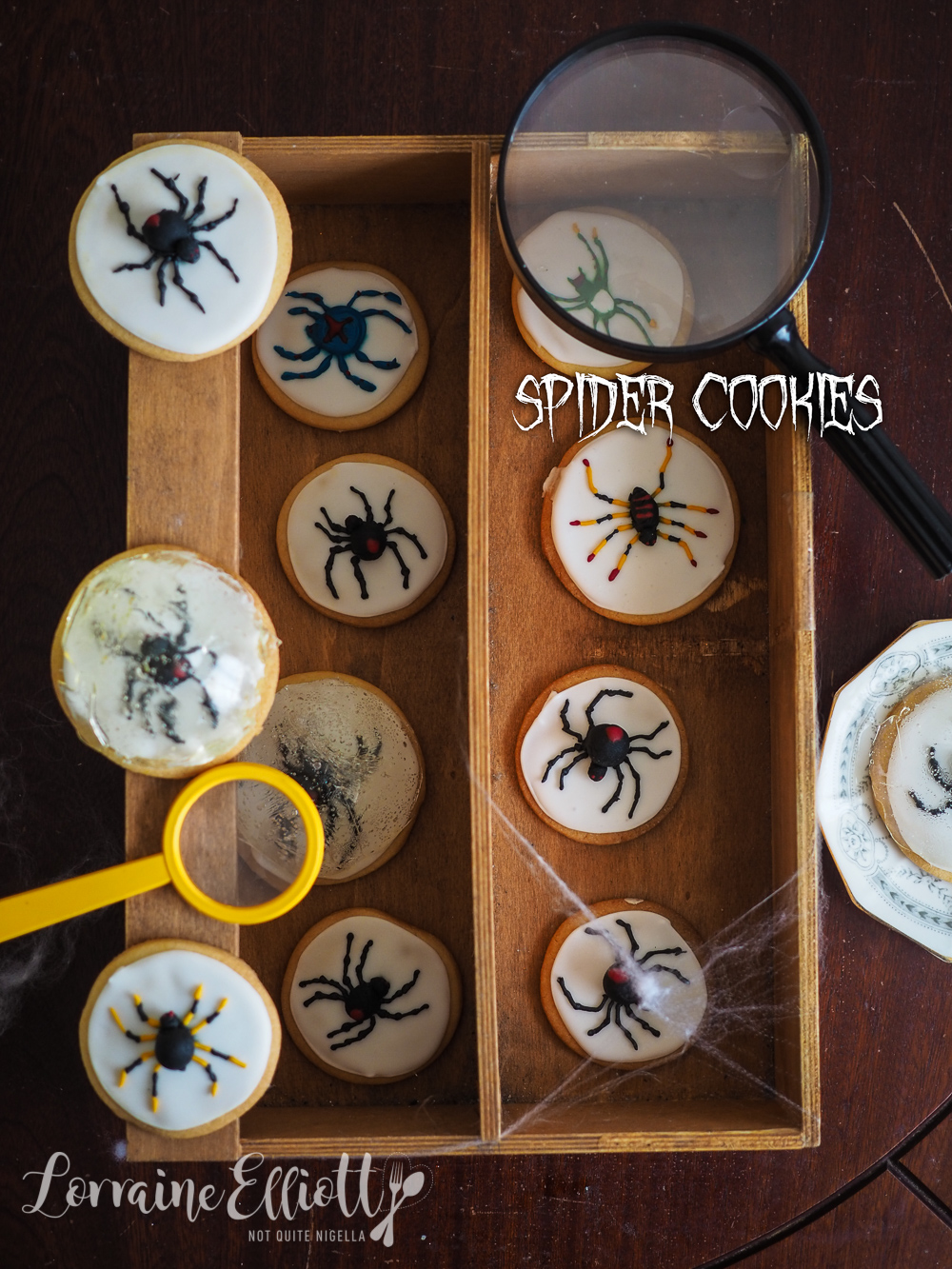 What's that creeping up your leg this Halloween? It's a spider cookie! Your favourite arachnid specimen is featured on these orange and cinnamon butter cookies. Top these with red back spiders or a fantasy spider. I also made sugar glass domes to mimic the look of a spider specimen paperweight!

I love making creepy sugar cookies and I was inspired to make these by a Sydney cookie maker Anikookie and her beautiful red back spider cookies. They were so realistic that it inspired this whole story. These cookies are a tasty orange and cinnamon butter cookie with decorative royal icing and fondant spiders on top. 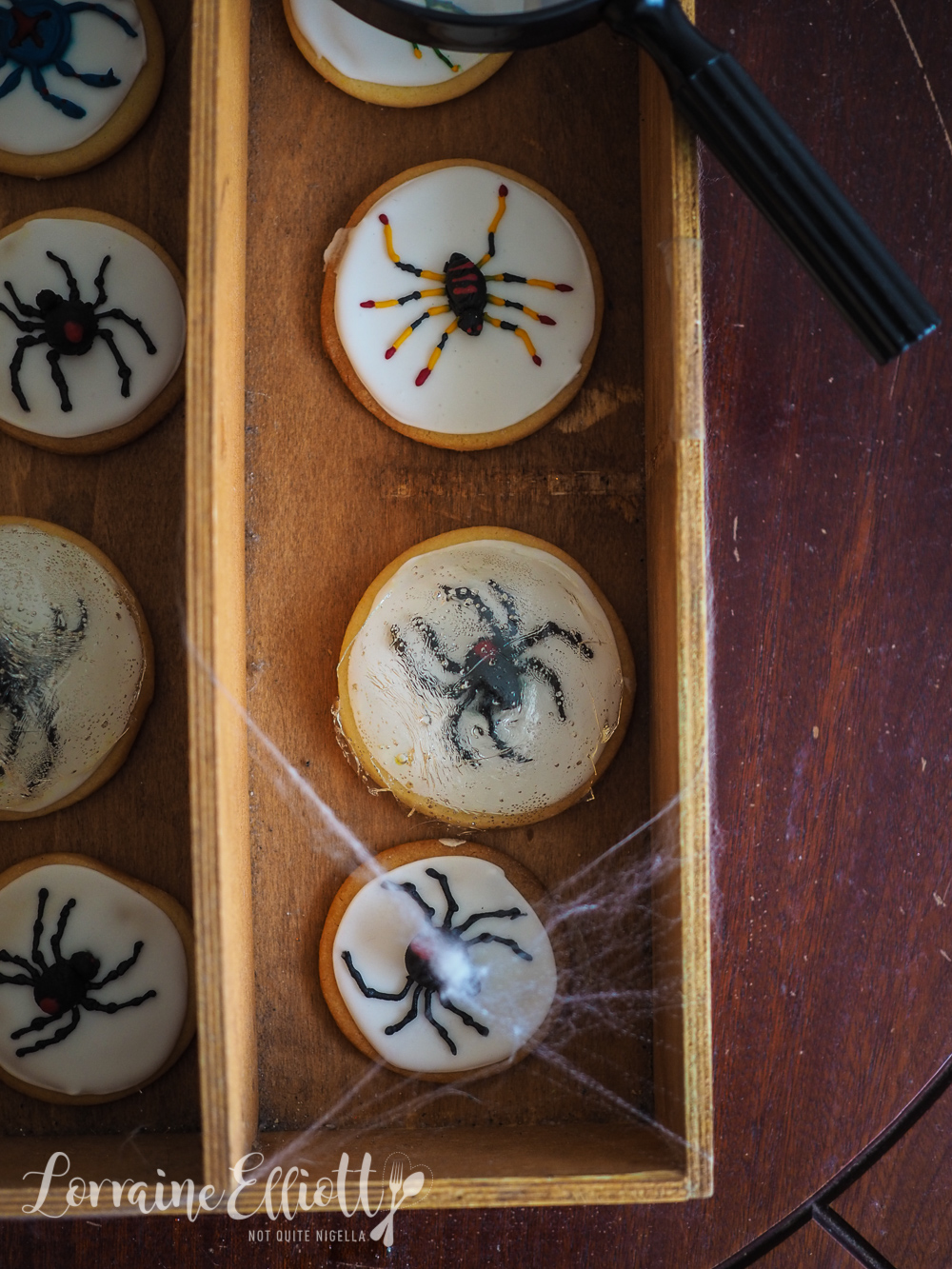 All about royal icing! Royal icing is a very simple icing made of egg white and icing sugar with a little lemon juice. It's a cake and cookie maker's dream because it sets hard and stays that way throughout all temperatures (unlike say chocolate that melts in the heat). I think of it like baking "cement" or glue as it sets so hard. It can also be piped in beautiful patterns. Because it sets hard so quickly, it is best used on the day you make it or within 1-2 days. Store it in an airtight container.

How do you make royal icing from scratch? instead of sieving icing sugar (which I hate - boring!) I put the icing sugar in a food processor or Thermomix and then blitz out the lumps and then add the egg white and lemon juice. You need pure icing sugar for this, NOT icing sugar mixture.

Is Royal Icing safe to eat? Yes, salmonella is more often found in egg yolks and the white does not readily support bacterial growth. You can also use meringue powder in place of egg if you are concerned.

Does royal icing taste good? It tastes just like sugar! 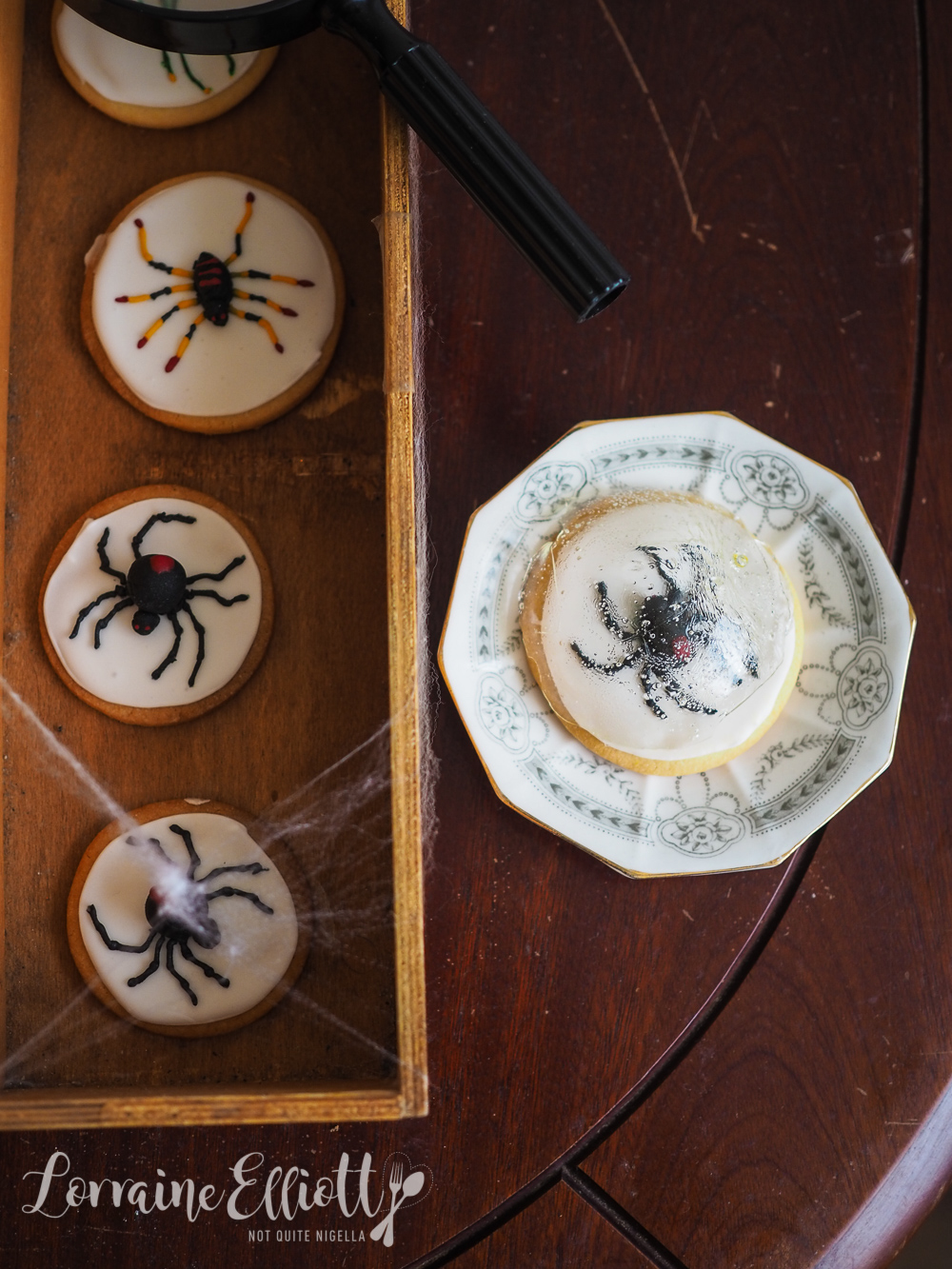 How to make a little parchment piping bag? Take a look at this youtube video I did with the very clever Jessica Pedemont of Chocolate Artisan. It's so quick and easy! 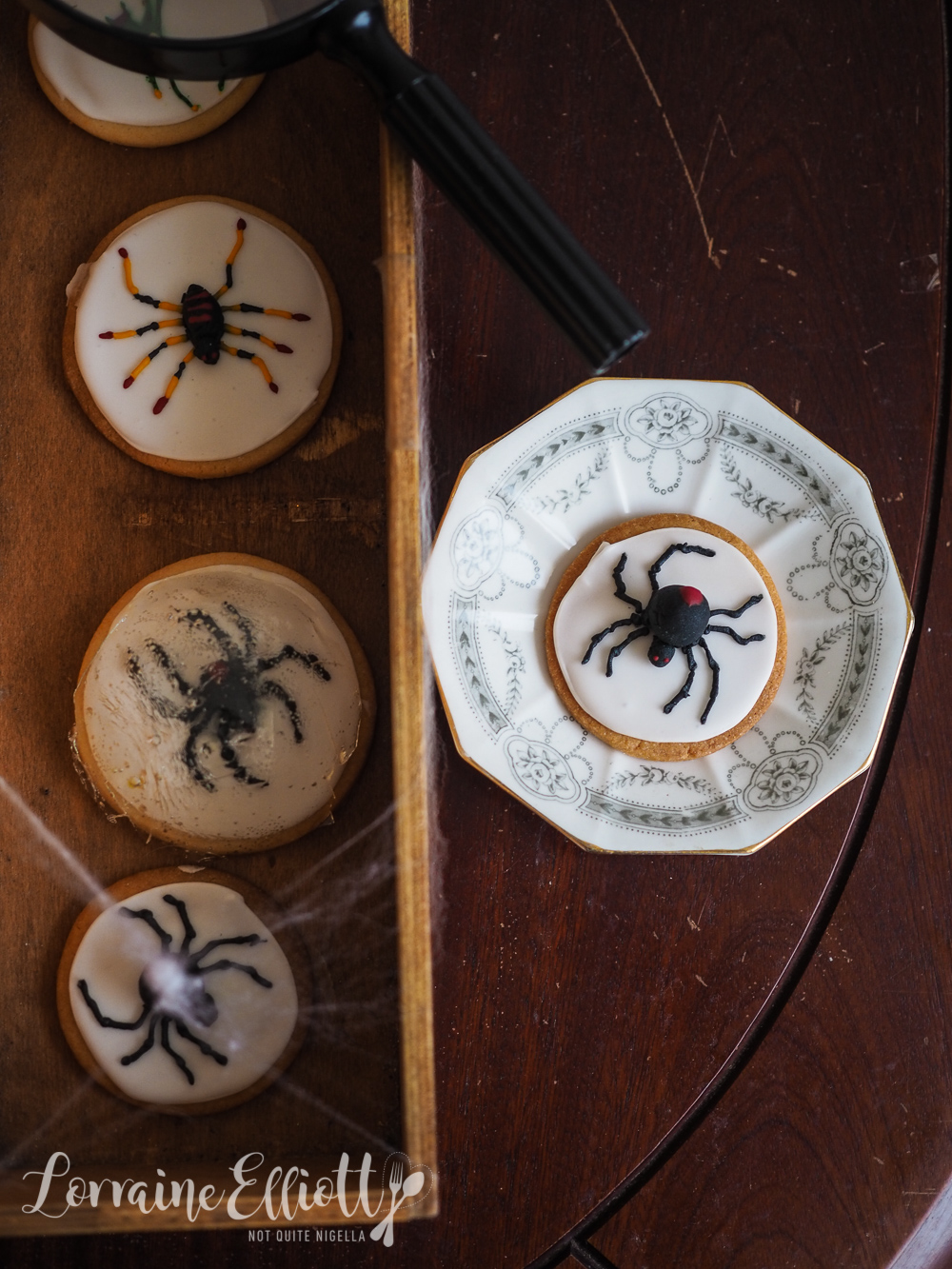 Sugar glass domes: please don't get me started on the domes. They were the hardest part and a pretty big fail! I have to say that none of the youtube videos I watched actually worked well so I won't be recommending them. Also if anyone suggests doing it on layers of cling wrap as per a viral video, it doesn't work on the cling wrap you get from the supermarket and the hot sugar syrup goes straight through. FAIL. I learned the hard way. 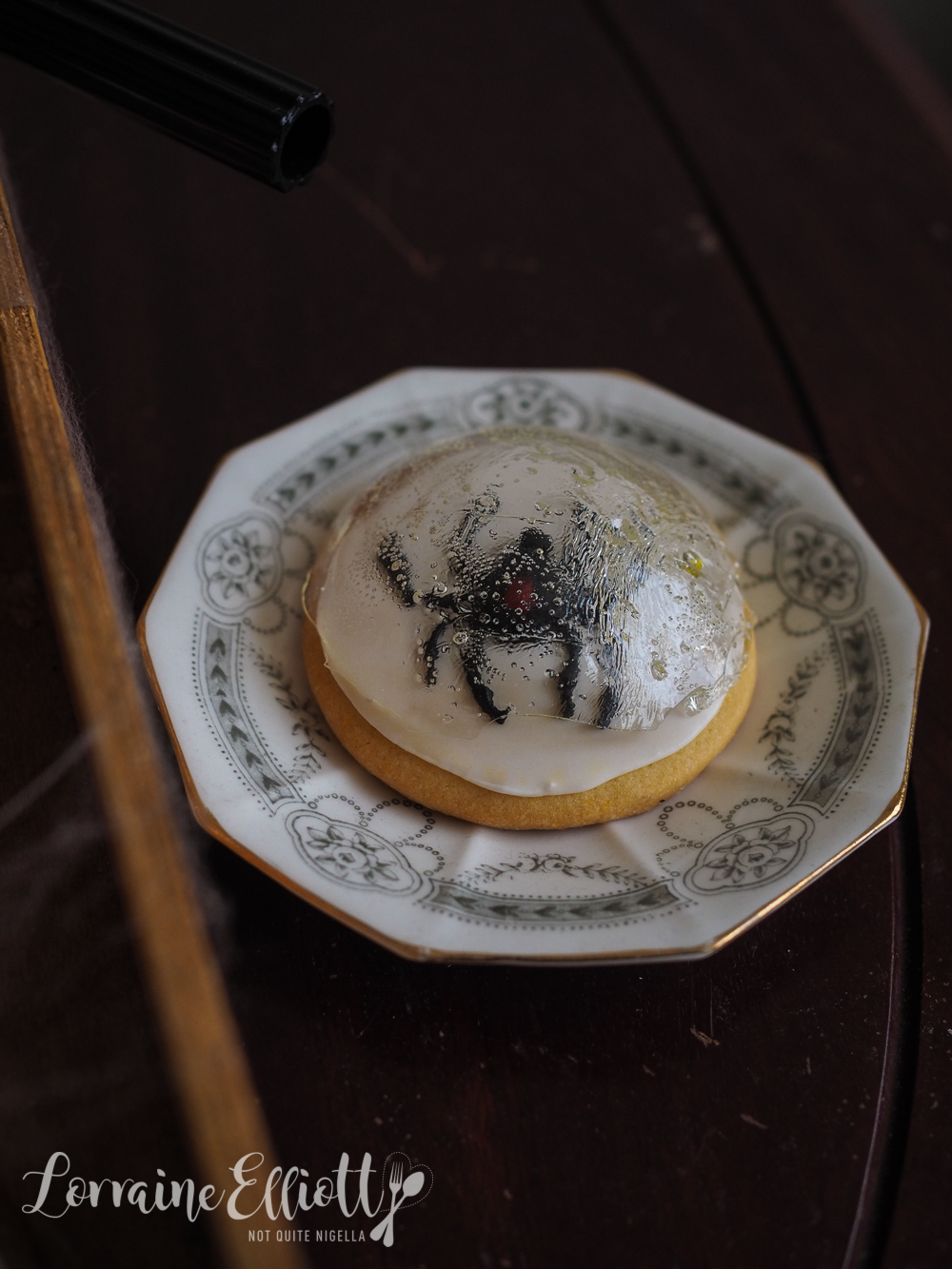 Speaking of creepy crawlies, a friend was telling me about a friend of hers Phoebe who had a nerve wracking experience. Not with spiders, but with a human. Phoebe lived alone in a house and travelled a lot for work. She would occasionally hear noises but assumed they were critters but then one day she decided to investigate to ascertain the source of the noise.

Her house had a crawl space underneath it and when she shone a torch she saw a pair of shoes, books and bedding! Someone was living in her crawl space or at least sleeping there. At first she was startled and frightened but then she realised that someone would have to have been quite desperate to live there. 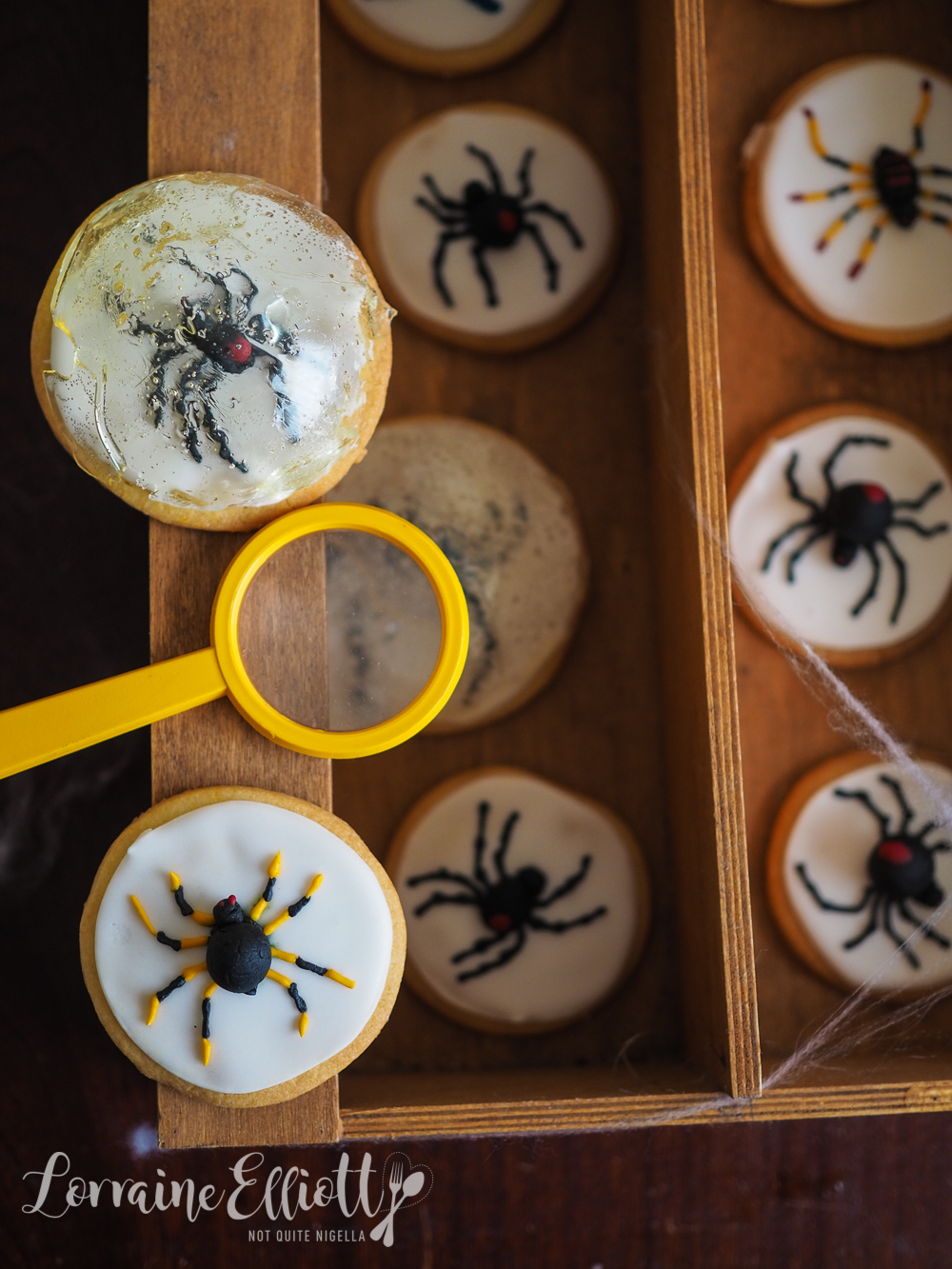 Her friend is a kind soul but as a woman living alone she didn't feel safe. She left him a note and some money and said that she was going away for a few days and that he needed to move out by the time she came back. And with that, her surprise guest disappeared...

So tell me Dear Reader, what would you have done in the situation? Are you arachnophobic? 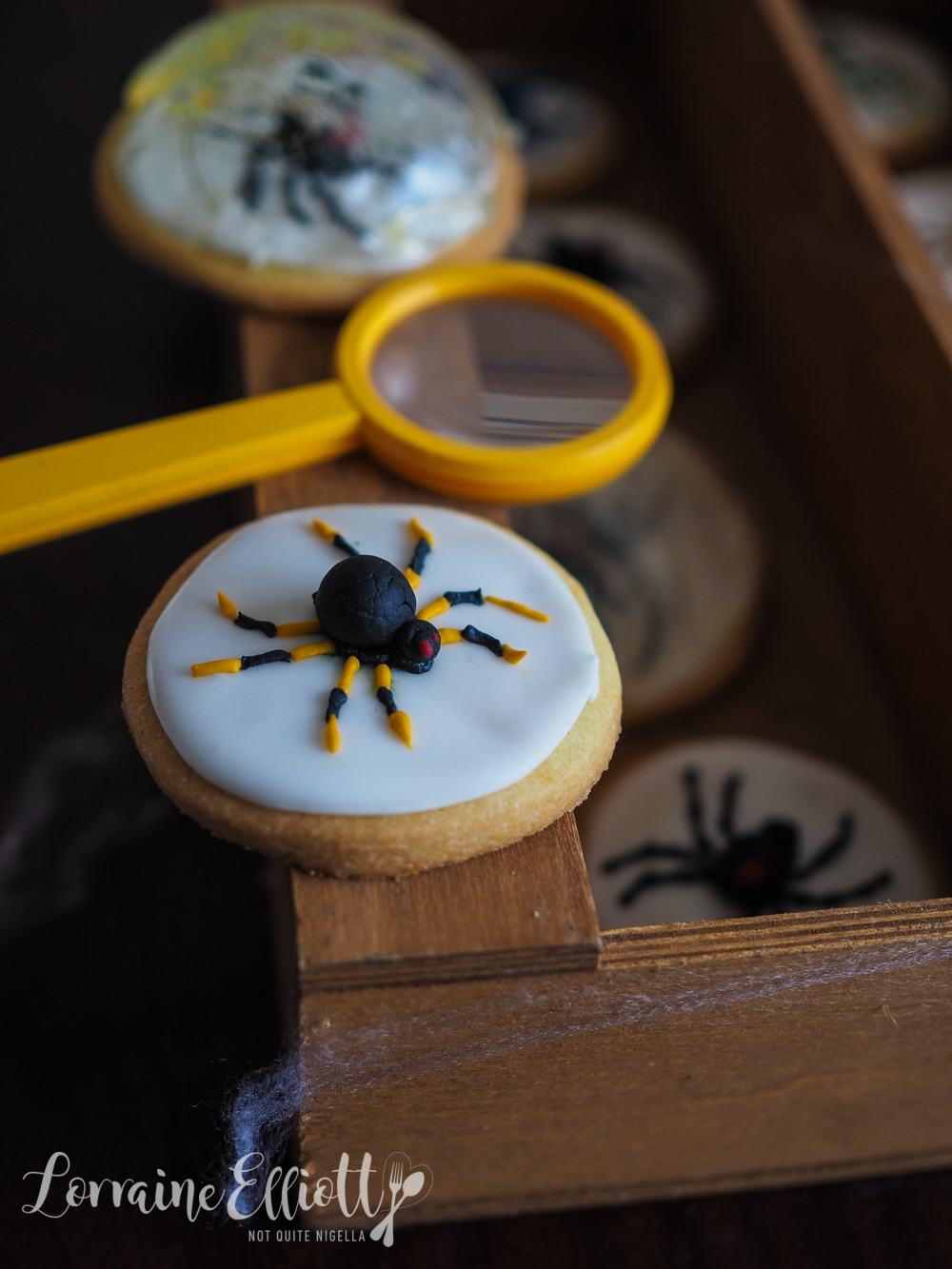 These cookies are best done over a 2 day period

Step 1 - Using a beater attachment, beat the butter and sugar until pale. Add the egg, cinnamon and orange zest and beat until combined. Then on the lowest speed, add the flour until it becomes a pliable dough. If it is too sticky, gradually add some more flour (if it too sticky, the dough will spread). Shape into a flat disc and wrap in cling film. Rest in fridge for 1-2 hours or overnight (I actually did mine 3 days in advance).

Step 2 - Preheat oven to 180C/350F. Line two baking trays with parchment. Roll out the dough between two sheets of parchment. This dough can roll and re-roll again easily but needs to be rolled between paper. Dip an 8cm/3.1inch cutter into some flour and cut out circles. I usually peel away the excess dough and use a brownie lifter to gently place them on the prepared trays about 1/2 an inch apart. Place in the fridge for 30 minutes. Bake for 15 minutes. Cool for 10 minutes on the tray and transfer to a cooling rack to cool completely. 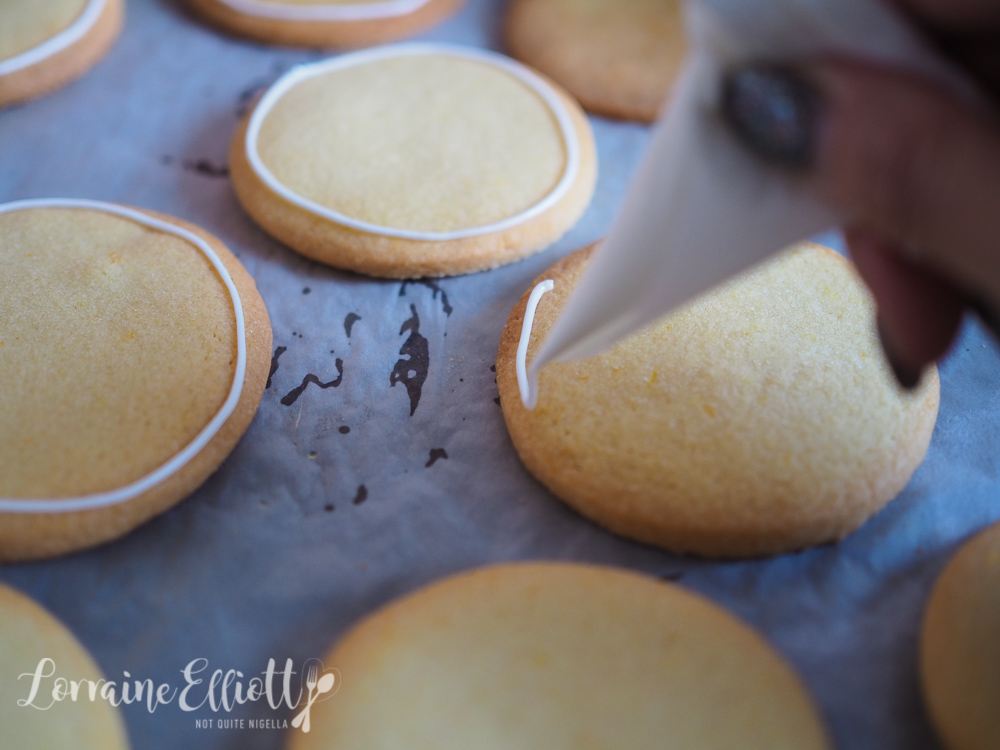 Step 3 - Make the royal icing. Mix the icing sugar and the egg white together. I do this in a food processor because I'm lazy and hate sifting icing sugar. But just a lil' warning, it does create lots of tiny little bubbles so it's best if you rest this covered for about 15 minutes before using it to let the bubbles dissipate. First I whizz the icing sugar so that the lumps disappear and then add the egg white. You want to be able to draw a line and have it hold so add more icing sugar if necessary. 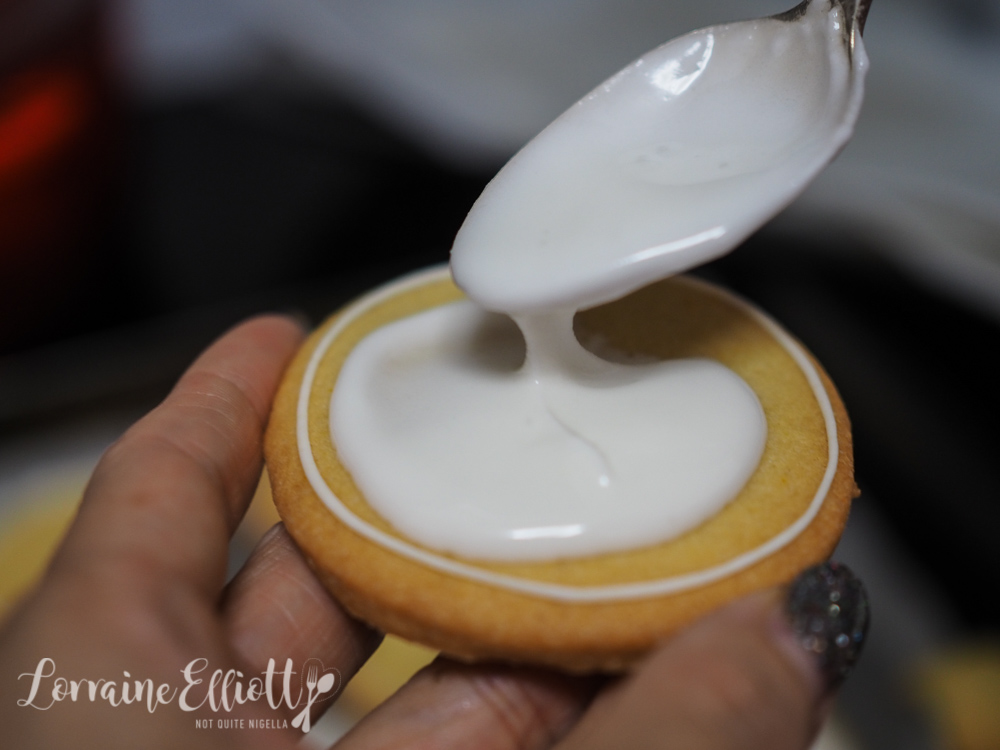 Step 4 - Take 2 tablespoons of white royal icing out and place in a small piping bag. Pipe a white outline around each cookie and let it set hard (around 15-20 minutes). Then take 3 tablespoons of white icing and add a few drops of water so that it becomes runnier in texture (be careful to not add too much water or the white background will not be a solid white colour). Spoon into the centre of the cookie spreading it out to the borders with the back of the spoon. Poke any air holes with a toothpick and allow to set completely, ideally overnight. 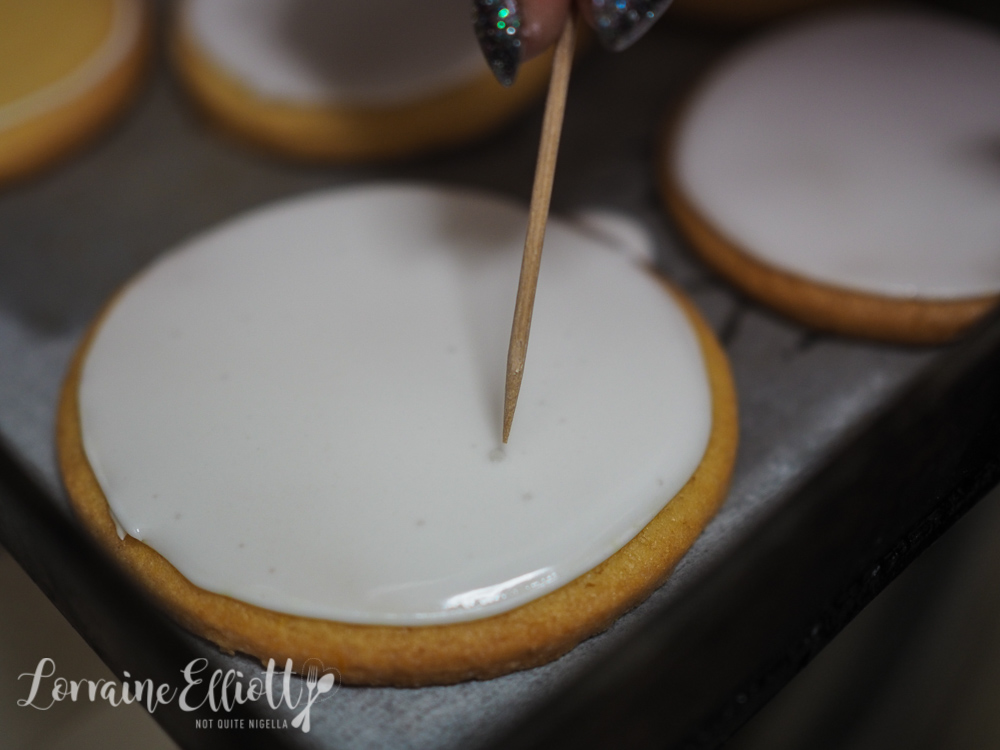 Step 5 - Roll out some small balls for the body and head of the spiders in black fondant and set aside. 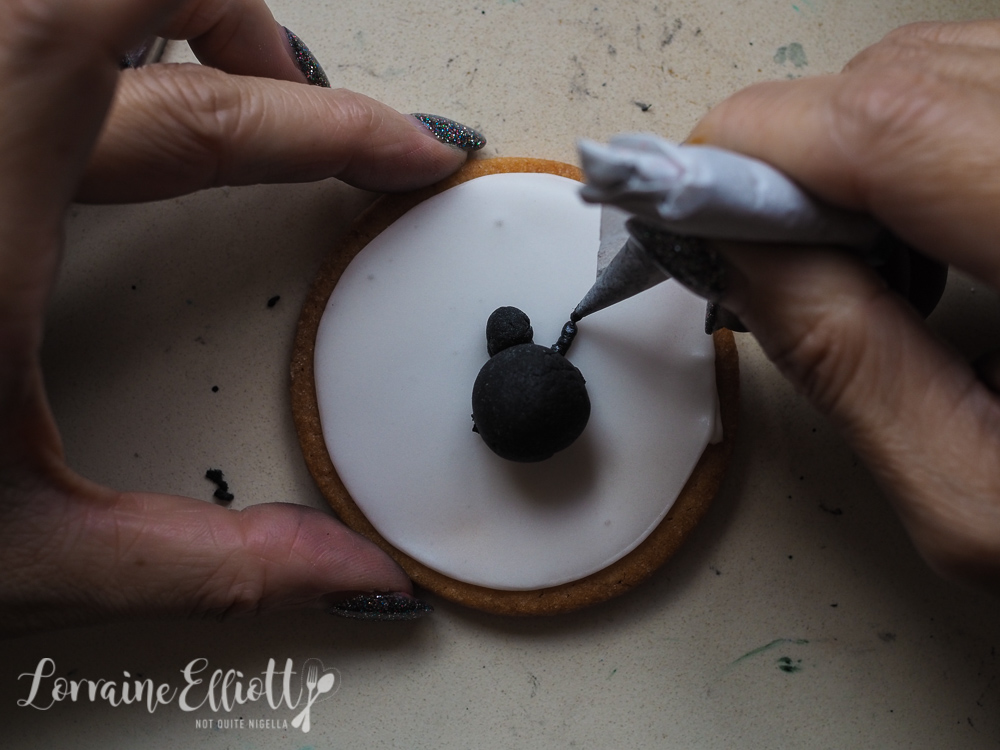 Step 6 - Add some black edible colouring to 2 tablespoons of the remaining royal icing and place in a small piping bag. Place the body and head of the spider in the centre of the cookie and affix with royal icing. Draw eight legs around the body. 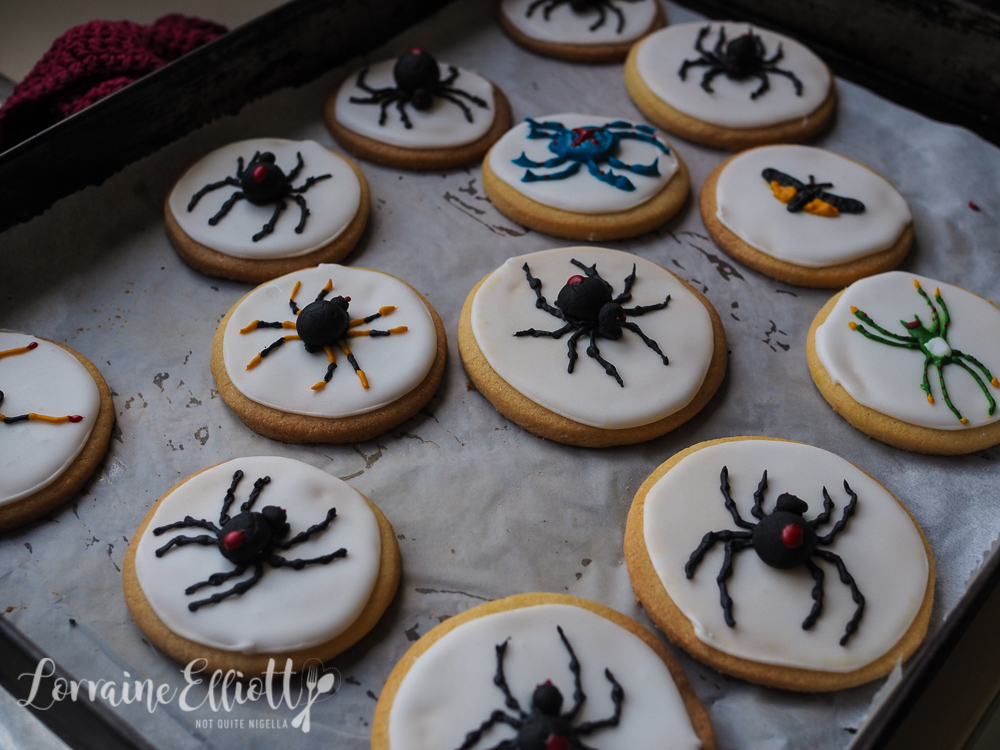 Step 7 - Add some red colouring to 1 tablespoon of royal icing and place in a piping bag. Pipe a red dot on the body of the spider and red eyes. Allow to set completely. 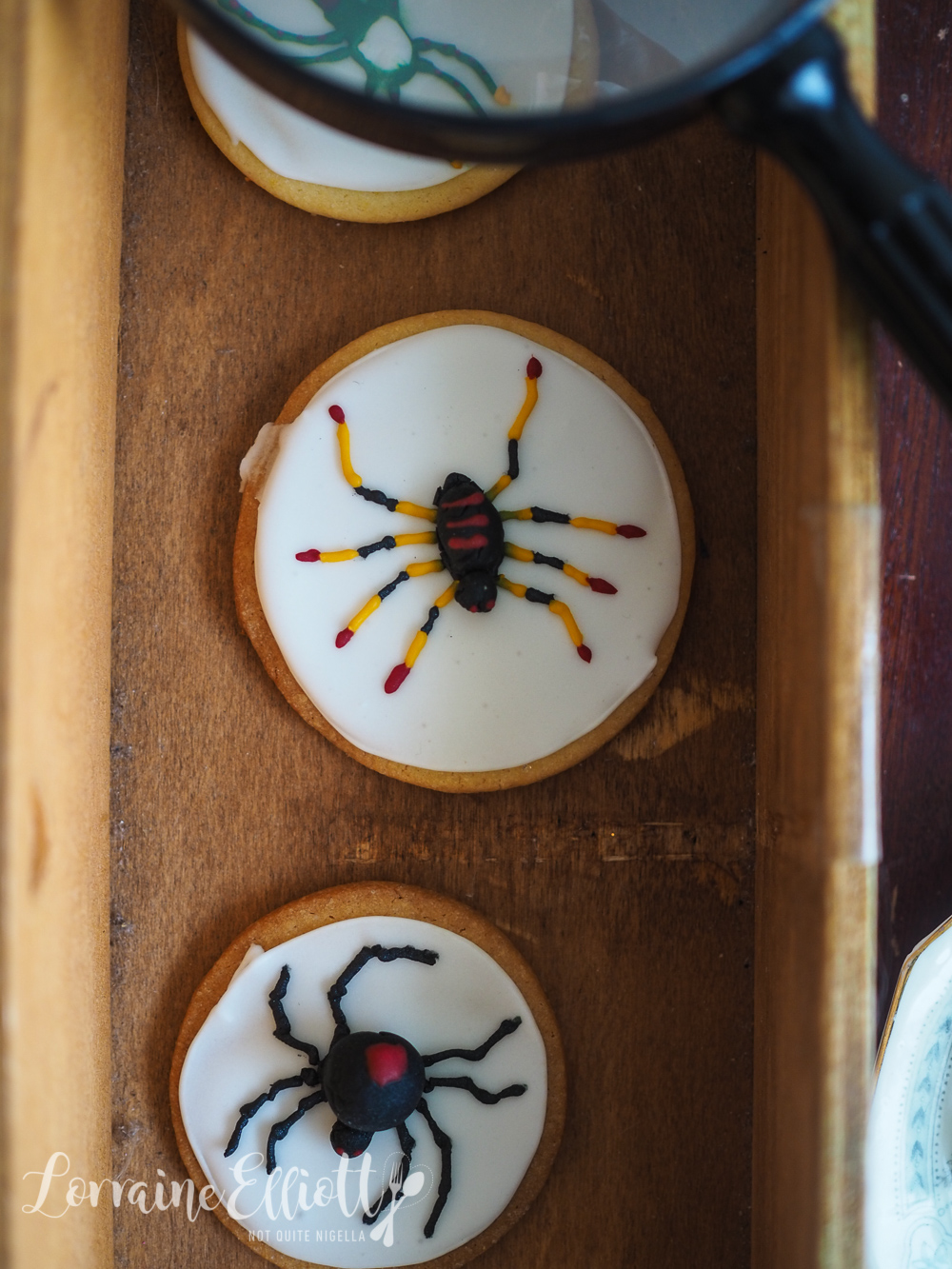 Note: you can also make yellow royal icing and make the alternate spiders I created too.