Making Hogwarts Castle Out Of Gingerbread! 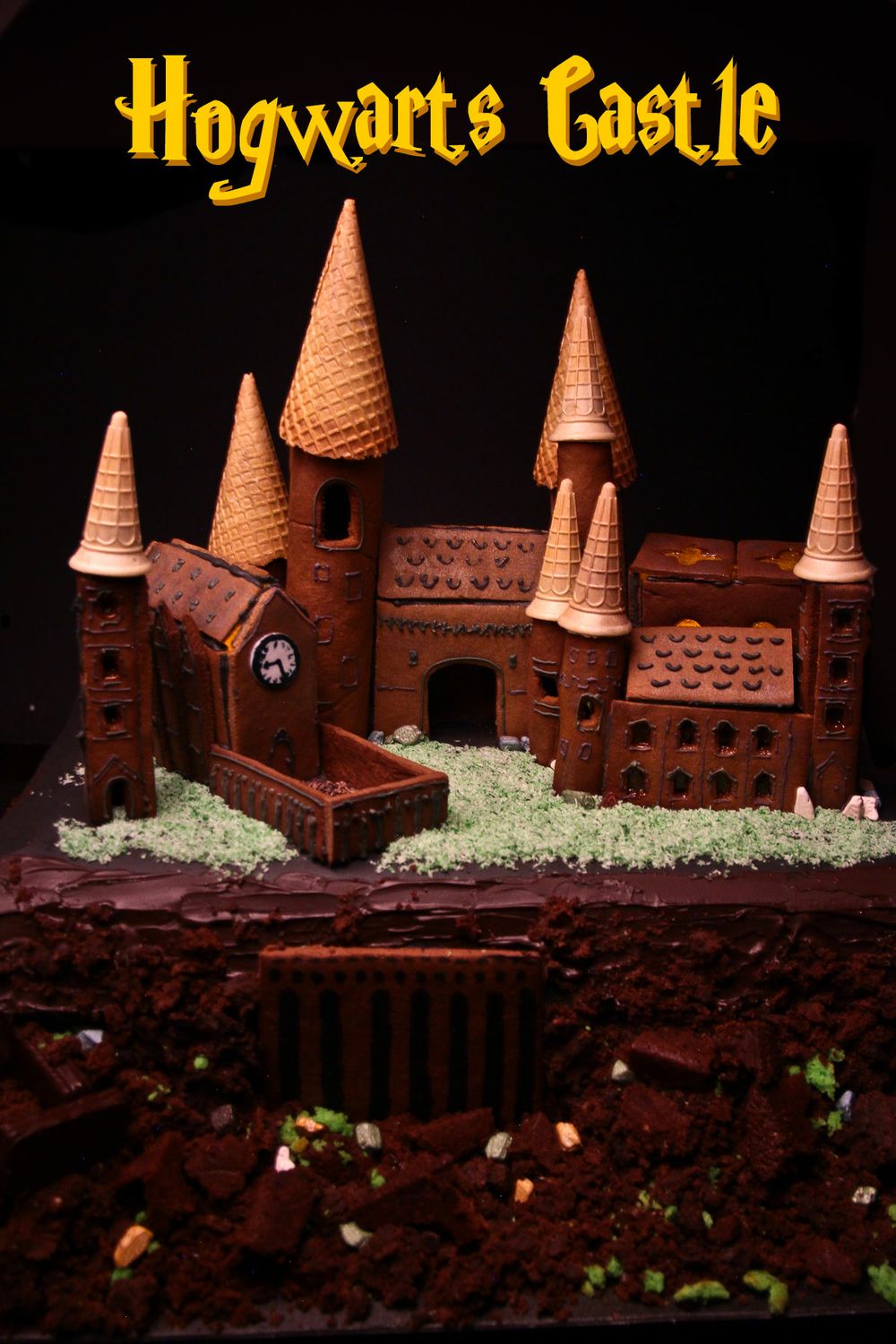 When I walked into our apartment after a weekend away, I entered the kitchen. Out of the corner of my eye, I saw it.

The freezer door was ajar and there was thick, dark blood oozing out of it. I gasped and immediately thought of Mr NQN's younger brother Manu who stays at our place when we are away. Had the poor, innocent boy met himself a bunny boiler or a lunatic who had lopped off his head and put it in our freezer? Do I watch too many crime shows? I watched in horror as a maroon red drop fell to the floor and gingerly opened the freezer door further. 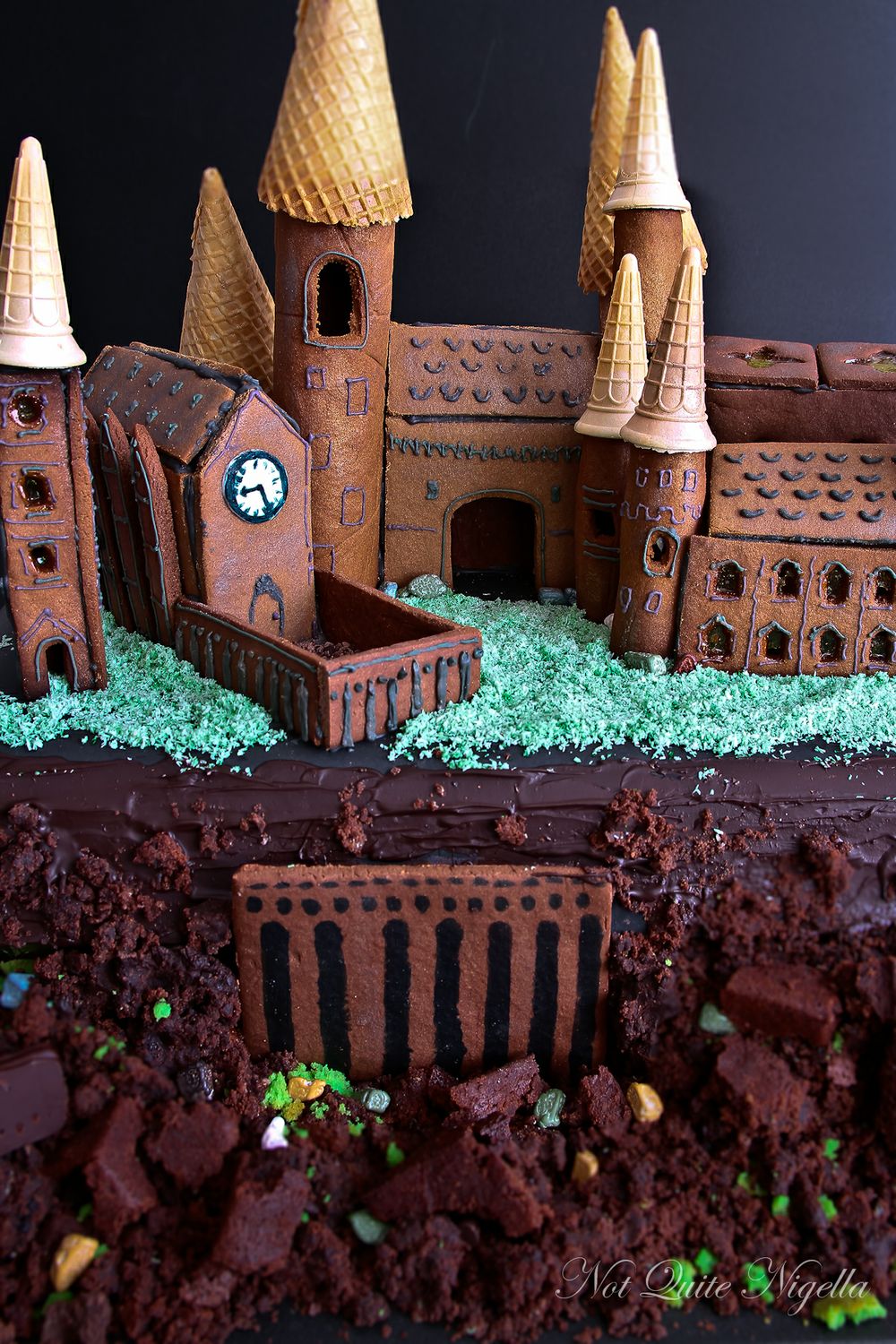 To my relief, it wasn't Manu's head. I thought back to what had happened on the Friday when we had left. I had taken something out of the freezer to give to my parents just before going away and I mustn't have closed it properly. And a zip lock bag of pig's blood that I had stashed in the freezer from last year's Hallowe'en party hadn't obviously been zipped properly and sprang a leak and over the last three days, the blood had thawed and seeped out in thick clots and liquid. I spent the next 15 minutes cleaning up the bloody mess, inhaling the metallic smell of blood, feeling like I was starring in a remake of Carrie. And the thing that I thought about once I was done? How I should have taken a picture of it. All I got were these Dexter like drops from when I went back and forth from the sink. 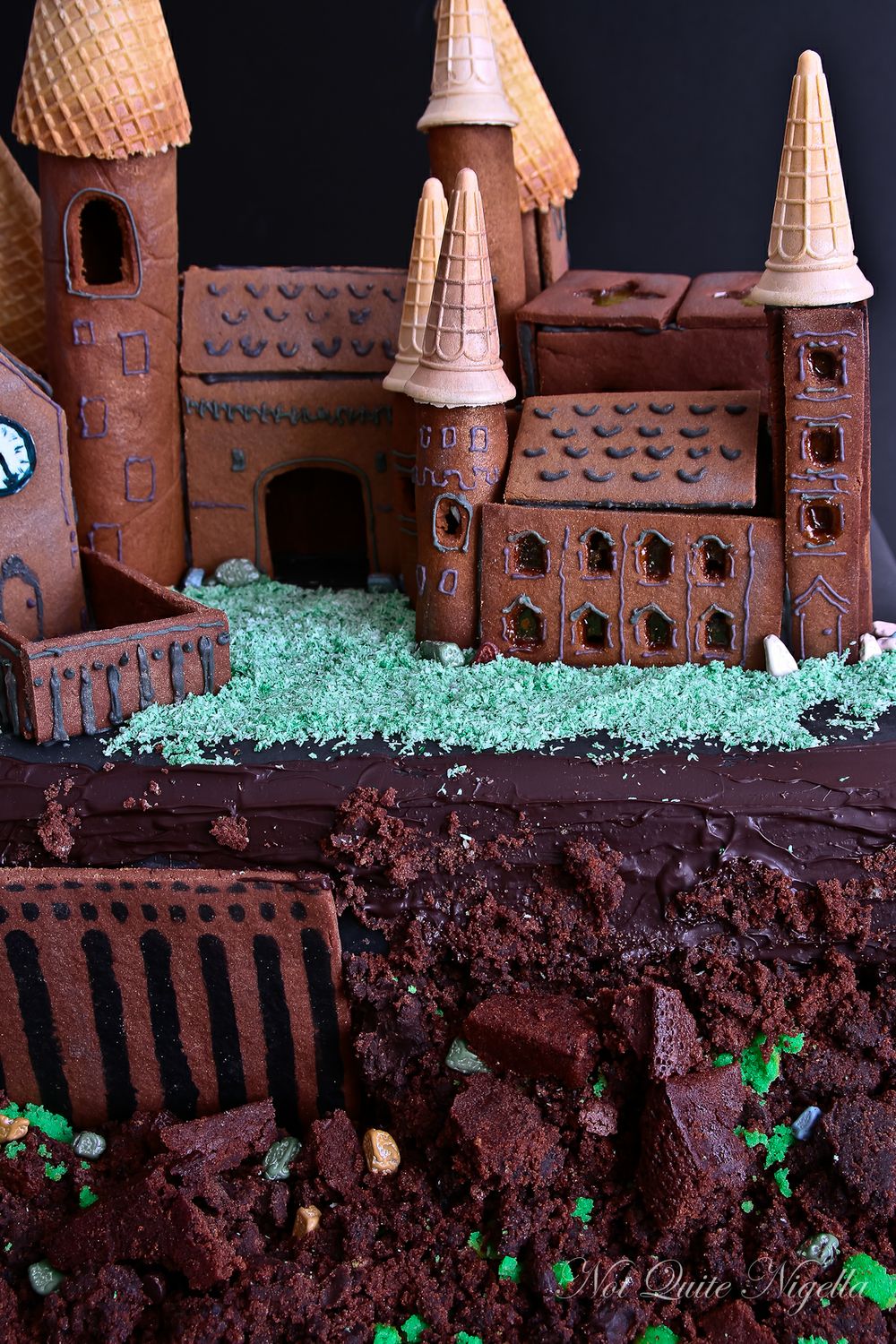 My day didn't get better. I went to a function where a woman asked if I was pregnant (I'm not) and instead of apologising for the error and moving on, she proceeded to blame me and my posture coming back three times like an annoying mosquito to tell me to stand up straight. I was thinking dark thoughts at that stage and if I had telekenesis, it would have sent her as far away from me as humanly possible. 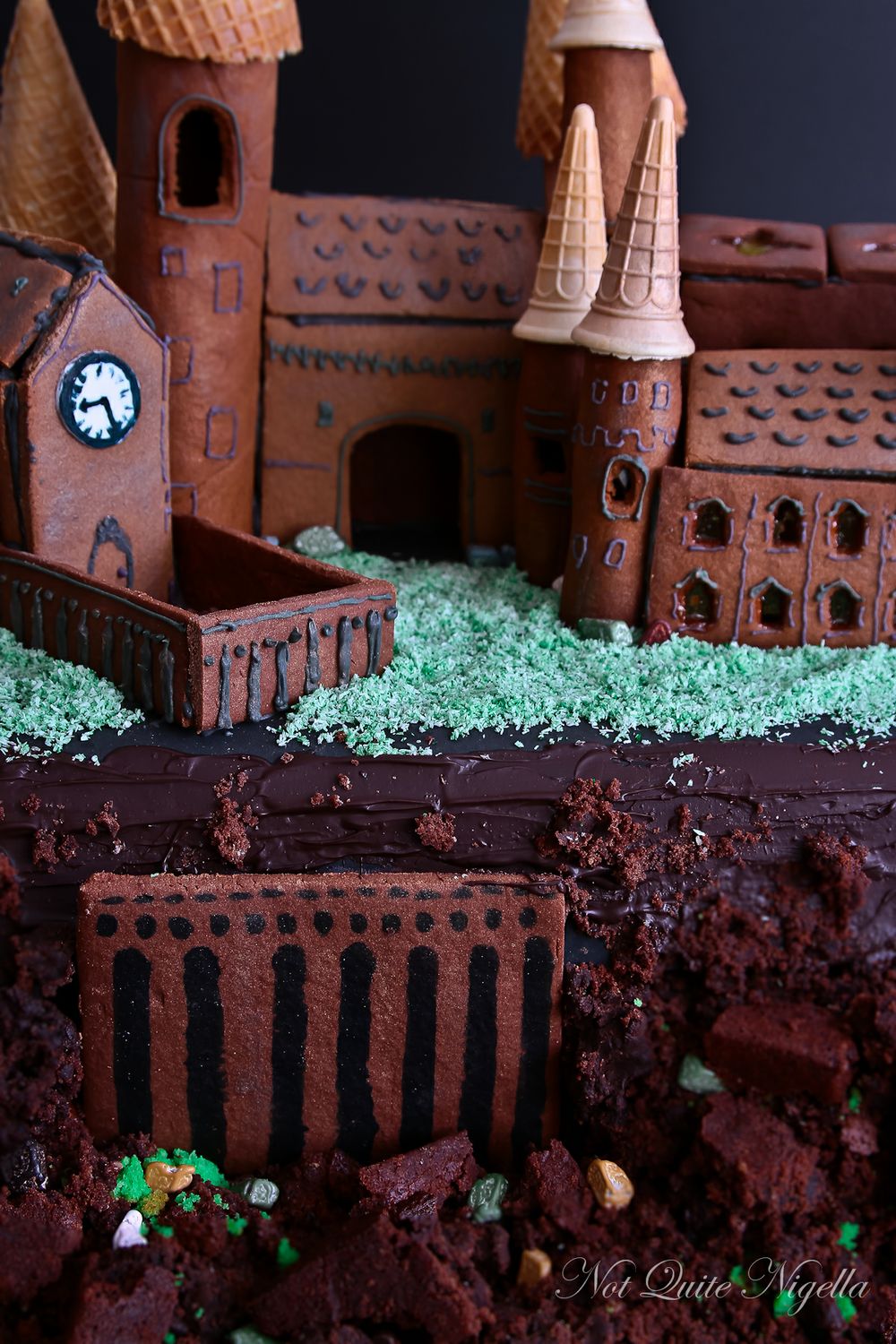 Then I went to the supermarket where there was a full car park and when I was loading my groceries, a car indicated that it was waiting for me. Now, I'm a special needs driver, in that I'm a P driver and not very confident, but it didn't stop everyone from beeping me when I couldn't get out. Flustered, I kept reversing and looking in the rear view camera wondering how  I could get in but not get out. I kept telling the driver "please go on, don't wait for me, I can't get out" as I could see other free parks in the facing row but no, he was waiting for my spot. In my panic, I ended up backing the car into the trolley collector vehicle who eventually returned to move it away while I was wringing my hands and cursing at myself. Then the list goes on and the day was hideously full of more first world problems that I won't bore you with. 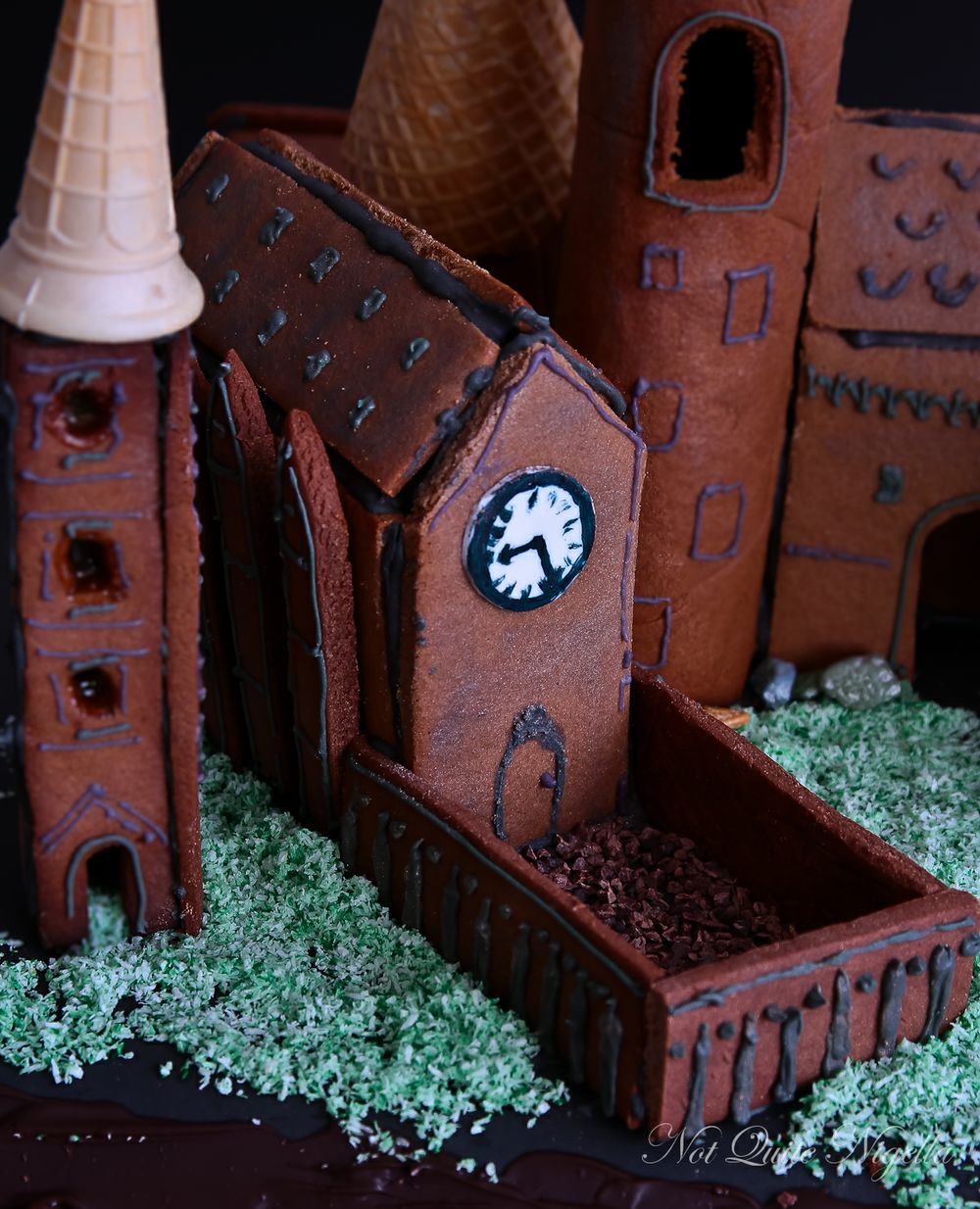 And I had to put together a gingerbread version of Hogwarts. I didn't actually know if I could do it. The last gingerbread house I did was a Haunted House but Hogwarts from Harry Potter seemed like a bit of a challenge, at times totally out of my reach depending on my confidence level. And that night, I didn't do it. I sat in bed and watched an episode of Dexter while eating some of the Ben & Jerry's Clusterfluff ice cream that I was sent. 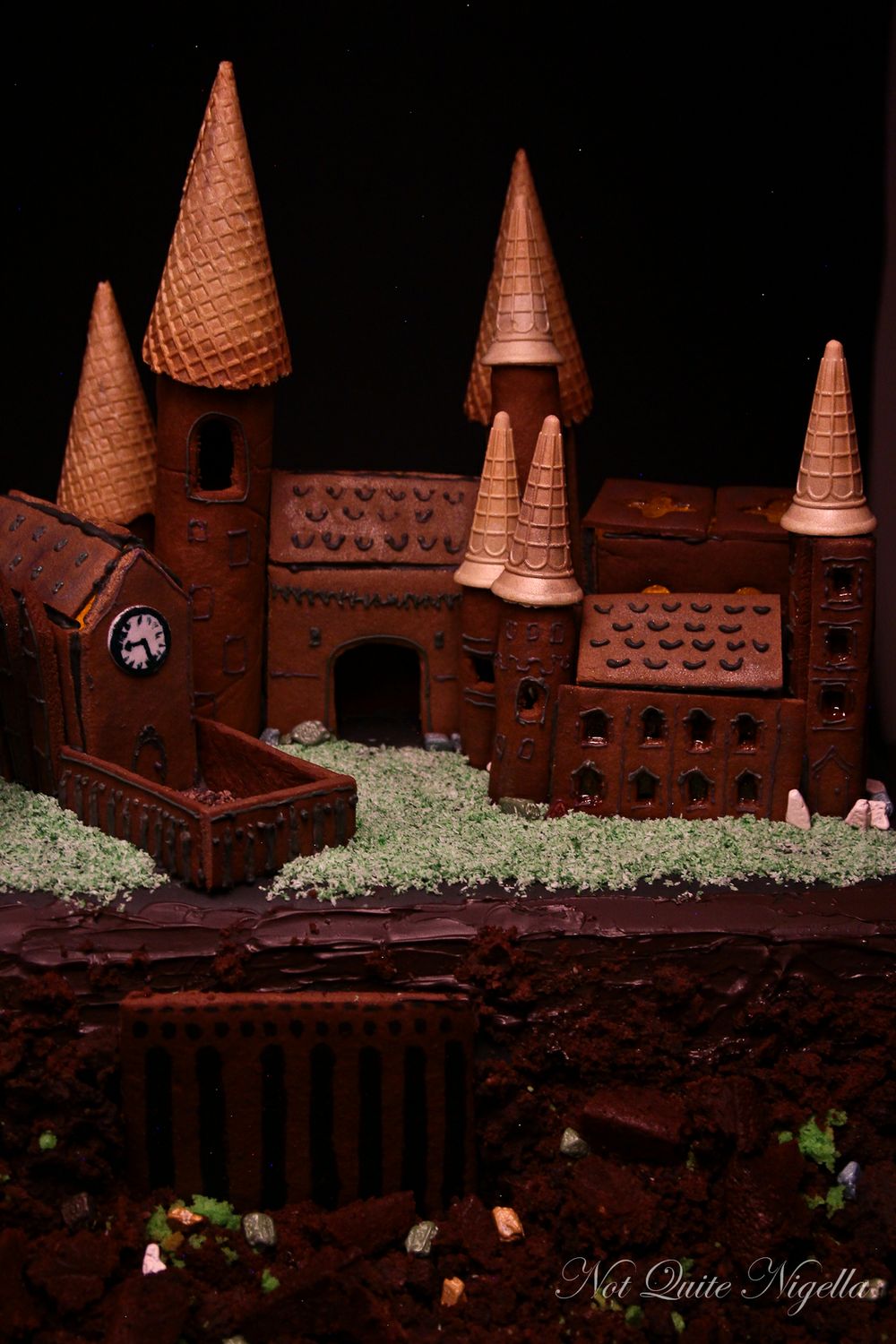 The next day I rose early, somewhat rejuvenated and set about constructing Hogwarts. I had already baked the pieces before I went away knowing that I didn't have a lot of time until Hallowe'en. This is a big job, I won't lie. And some of you might not even think that this looks like Hogwarts if you compare it to a model version of it but really, I have definite limits with gingerbread. I took some cues from this site who posted step by step photos which were enormously helpful but used my own chocolate gingerbread recipe. 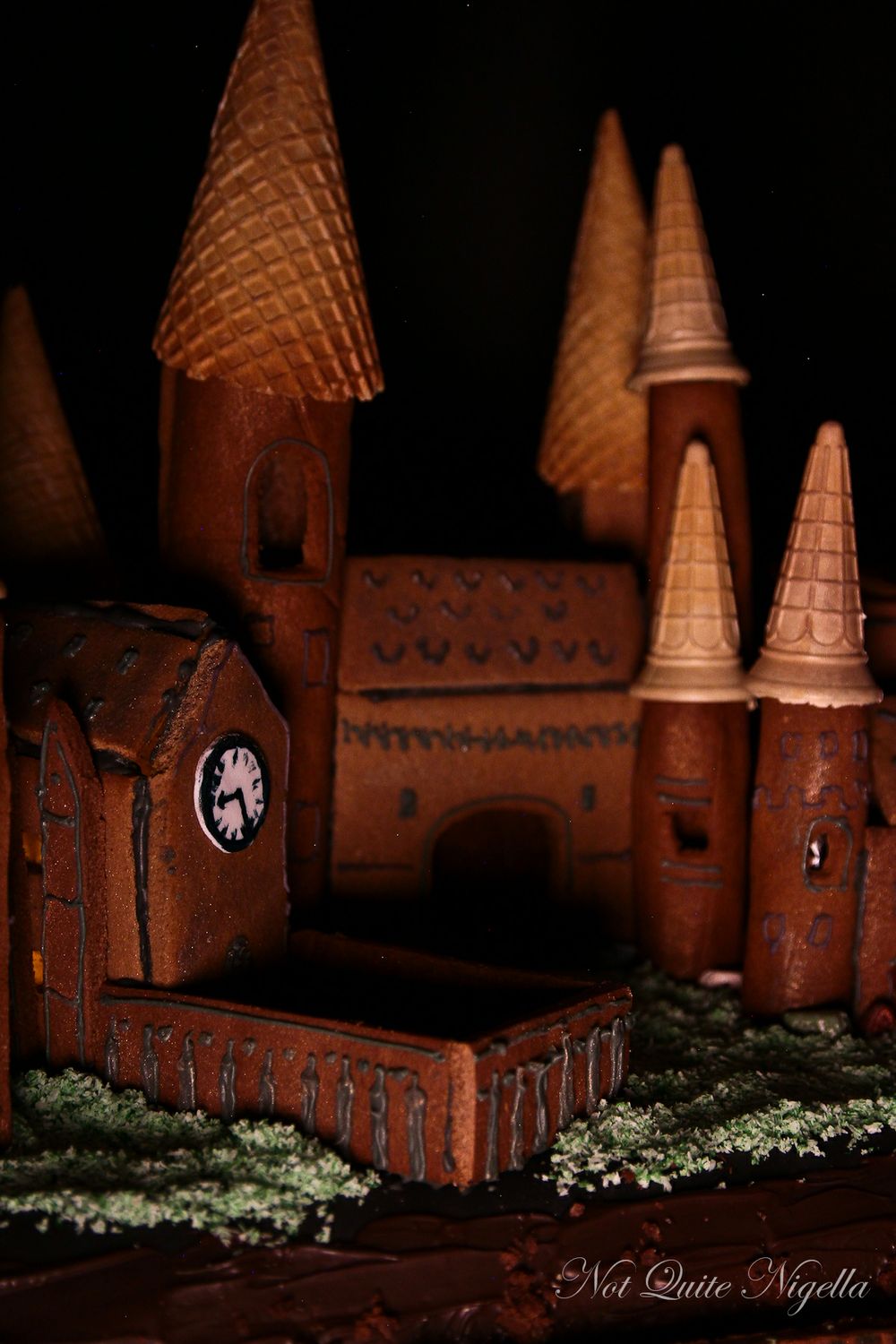 So, if you've lost your mind ever so slightly, here is the recipe. When I have the strength, I'll scan the stencils to cut out. As for me, I think I'm going back to bed for a little while...

So tell me Dear Reader, do you ever feel driving or parking anxiety? Would you think twice before asking someone if they are pregnant or is that a normal question? And are you a Harry Potter fan? 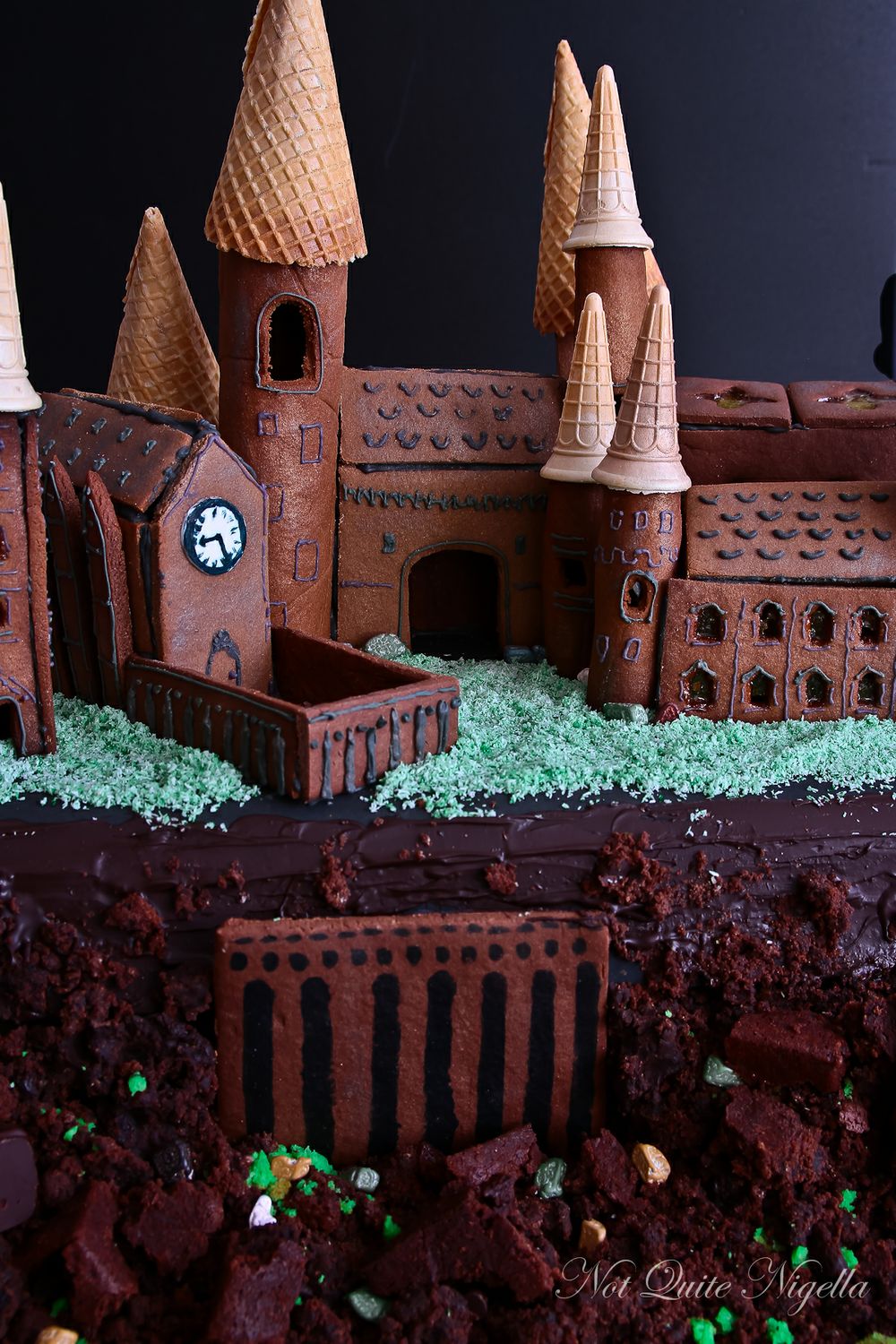 You will also need the following:

Step 1 - In the bowl of an electric mixer fitted with a beater attachment (you may need to do this in two lots as it's very large), beat butter and sugar together until pale, add golden syrup and egg yolks. Turn speed down to the lowest and add in flour, ginger, cocoa and bicarb and mix together. Knead on a clean benchtop until it comes together and form a circle and wrap in cling film and refrigerate for 30 minutes. 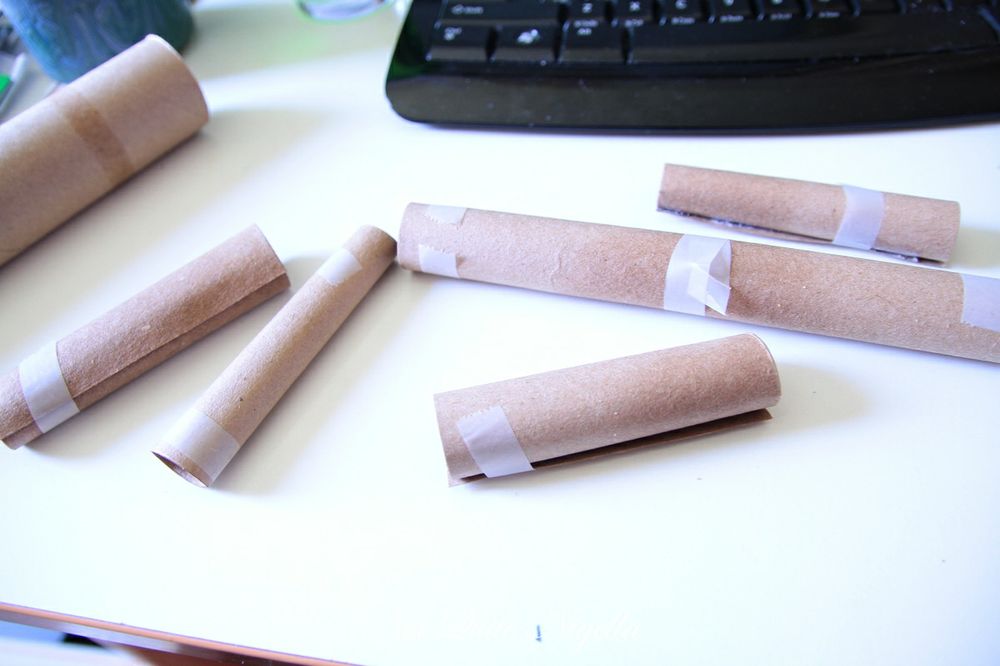 Rolling the cardboard, securing it and allowing it to dry 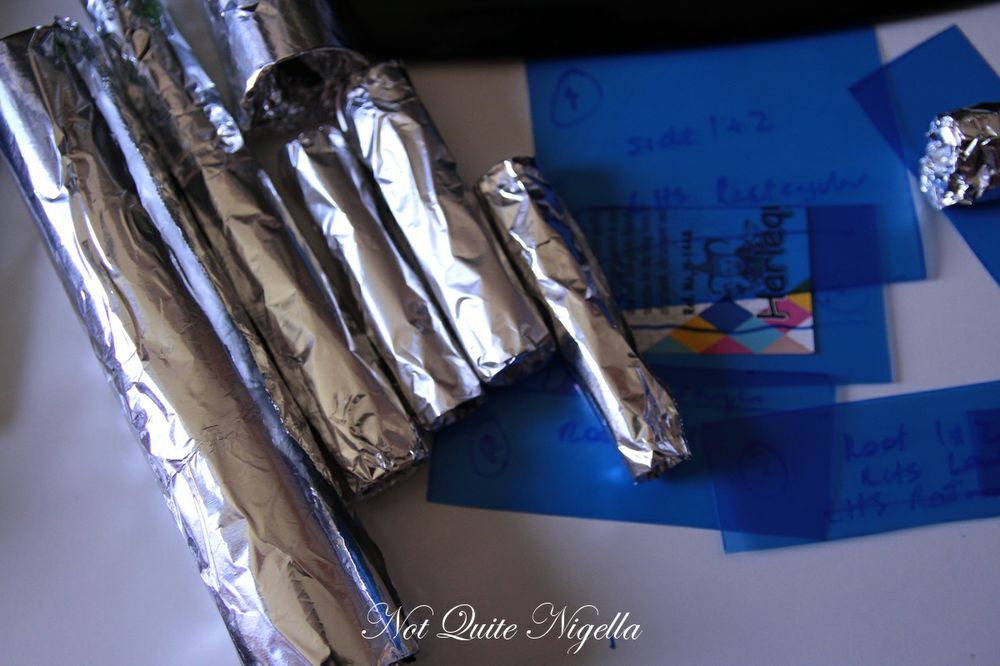 Step 2 - Cut out the shapes in overhead plastic. For the round towers, wrap the paper towel core in foil. To make smaller ones, spray the soft cardboard with a little water and then roll up into the desired size. Staple this secure and allow to dry and then wrap in foil. And yes at this point, I think I was still sane but starting to lose it... 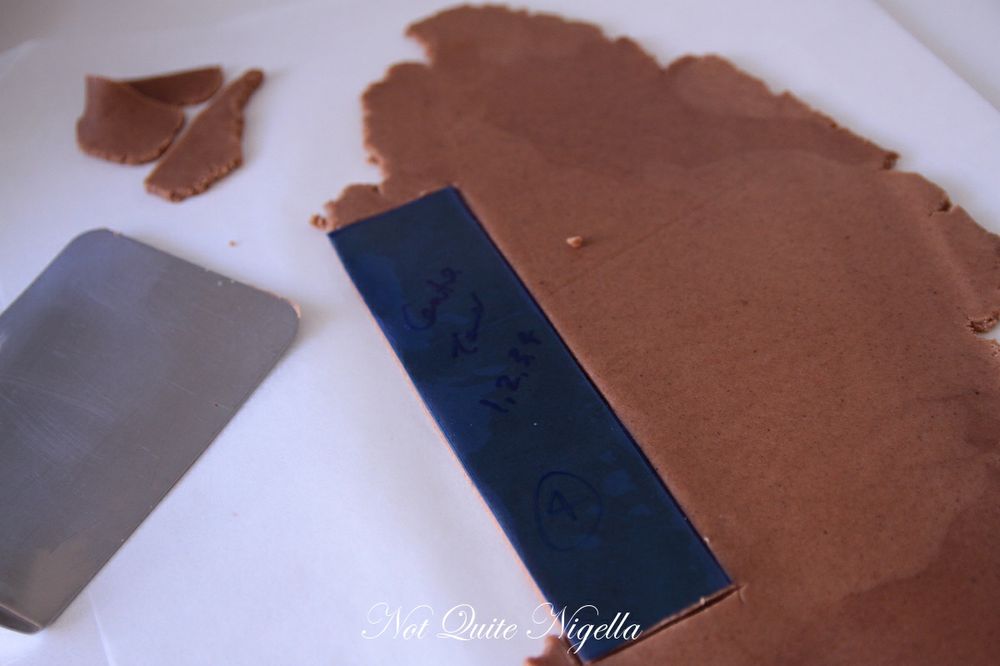 Step 3 - Line three trays with baking parchment and preheat oven to 170C/340F. This dough is very easy to reroll and tastes absolutely great but there are some rules.  Take two pieces of baking parchment and a rolling pin and roll out the dough between the parchment. Then place the piece of overhead stencil on top and using a paring knife, cut around it and do not remove the plastic from the top. Using a spatula gently lift the dough-the plastic stencil helps hold it together and place on the parchment lined tray. 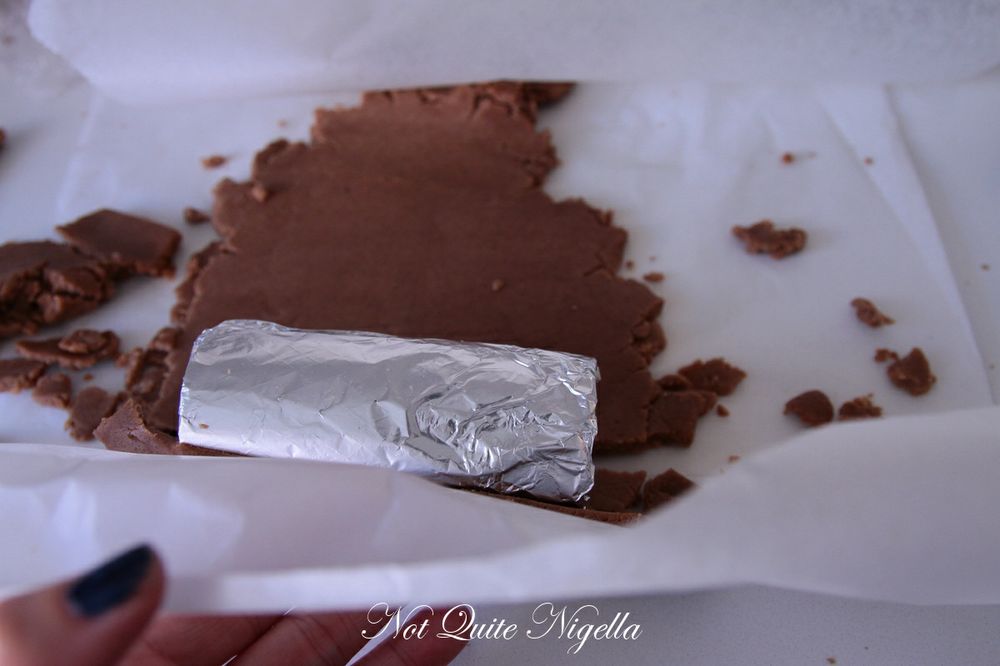 Rolling gingerbread around the core to make a tower

Step 4 - To make the round towers, roll out the dough and using the parchment, roll the dough onto the foil wrapped core. This is hard at first so this may take a few goes and start with the smallest as the largest one is really hard. 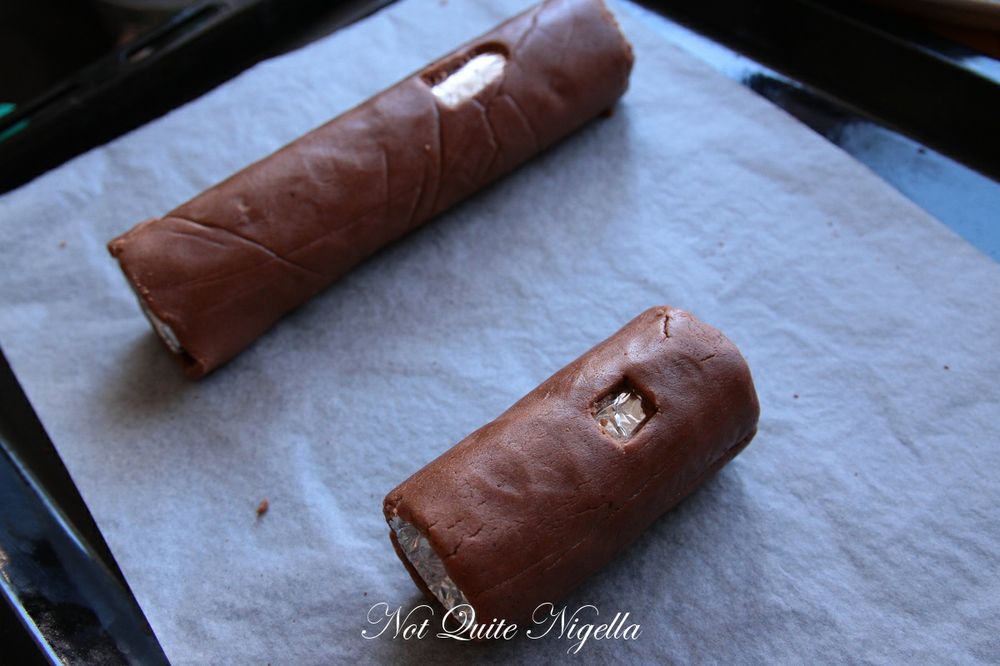 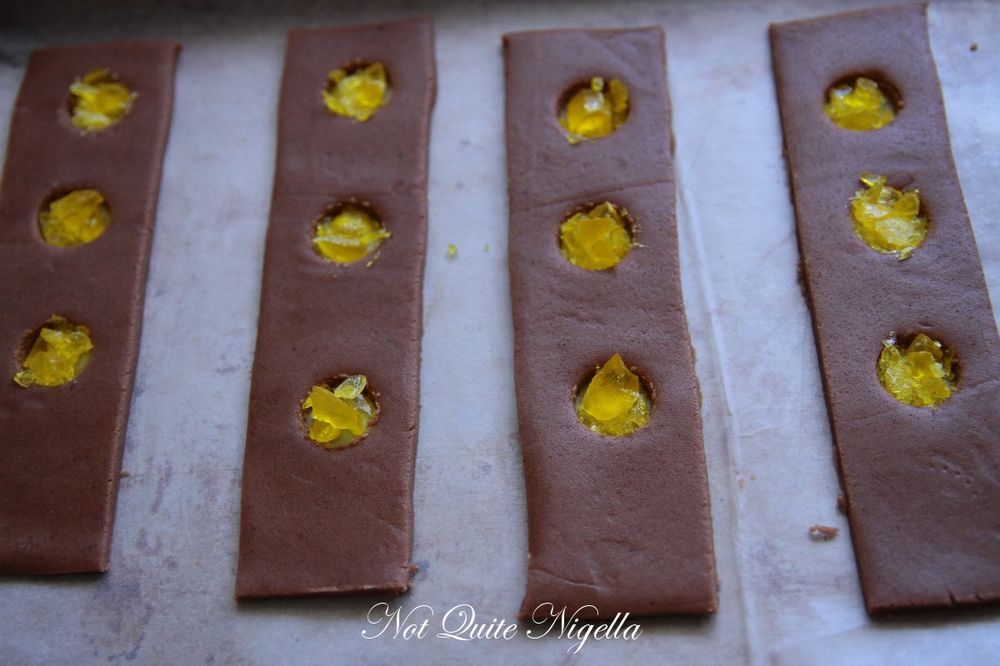 Step 5 - If you want that stained glass look, cut out windows using a knife or a cutter and crush the boiled lollies in a mortar and pestle and spoon them carefully into the cavities. Bake the gingerbread for 10 minutes or so until baked through and no longer soft. Cool for 5 minutes and then place on a rack.

Step 6 - Make royal icing by beat egg whites with lemon juice until foamy on low speed increasing to medium speed. Add sifted sugar and colouring while beating until desired consistency is reached. You want it a little stiff in order to pipe the outline however, if it is too stiff, add a little warm water. Fill a small piping bag with the icing-I usually make them out of baking parchment, and pipe patterns on the pieces once cooled. Then using a dry brush, add lustre powder to give it a little depth. Once the royal icing is dry, cover with cling wrap until needed. Reserve the rest of the royal icing for constructing Hogwarts.

Step 7 - Make the clock face by rolling out the white fondant very thinly and cutting out a circle. Adhere this to the front of the clock tower piece with a little water. Once dry and hard, draw hands and a face on it.

Step 1 - Preheat oven to 150C/300F. In a saucepan, melt the butter, chocolate, sugar and water until melted and smooth. Cool for 15 minutes. Line a 21cm square tin with parchment.

Step 2 - Using a whisk, add the flour, cornflour, cocoa, eggs and baking powder and whisk to combine. Pour into the prepared tin and bake for 60 minutes or until a skewer inserted in the centre comes out clean. Cool until needed for use. I wrapped this in foil once cooled and stashed it in the freezer. It survived the Carrie even just fine and tasted so rich and moist.

Step 3 - Make ganache by melting the chocolate and cream together and allowing to firm up a little. If it stiffens too much, microwave it a little on medium heat. 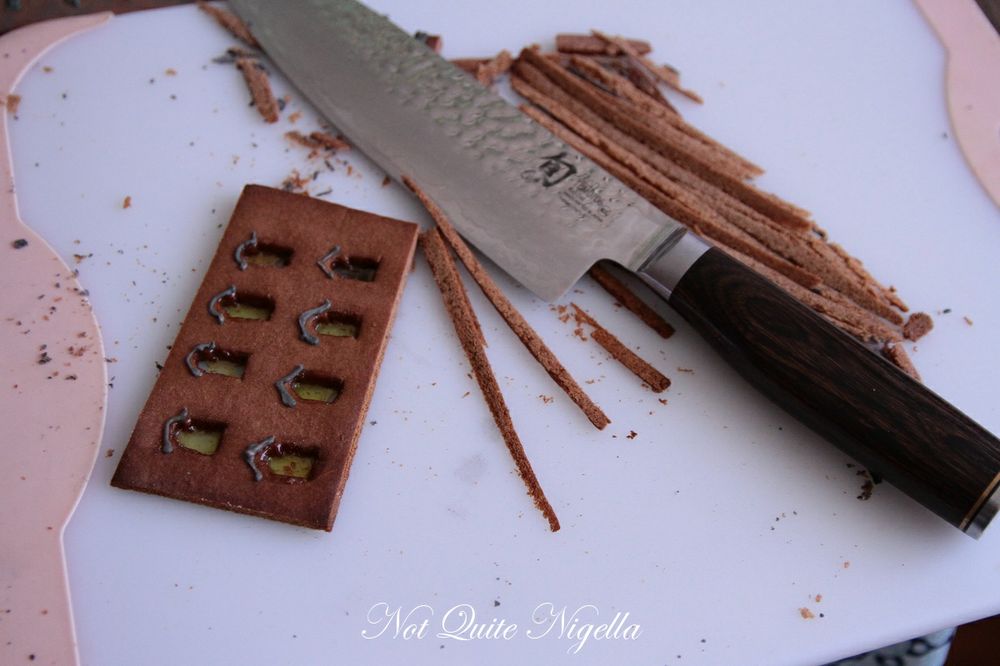 Step 1 - A day or two before when you want to serve it, make the buildings because they may need some time or overnight to dry and set. Basically match up all of your pieces and then trim the sides using a very sharp knife if they are a bit wobbly or misshapen. Then use the royal icing in a small piping bag as glue. Only put the roof on once it is fully set (which can take a few hours depending on your weather) and use straight sided cups to help support the royal icing while it is setting. 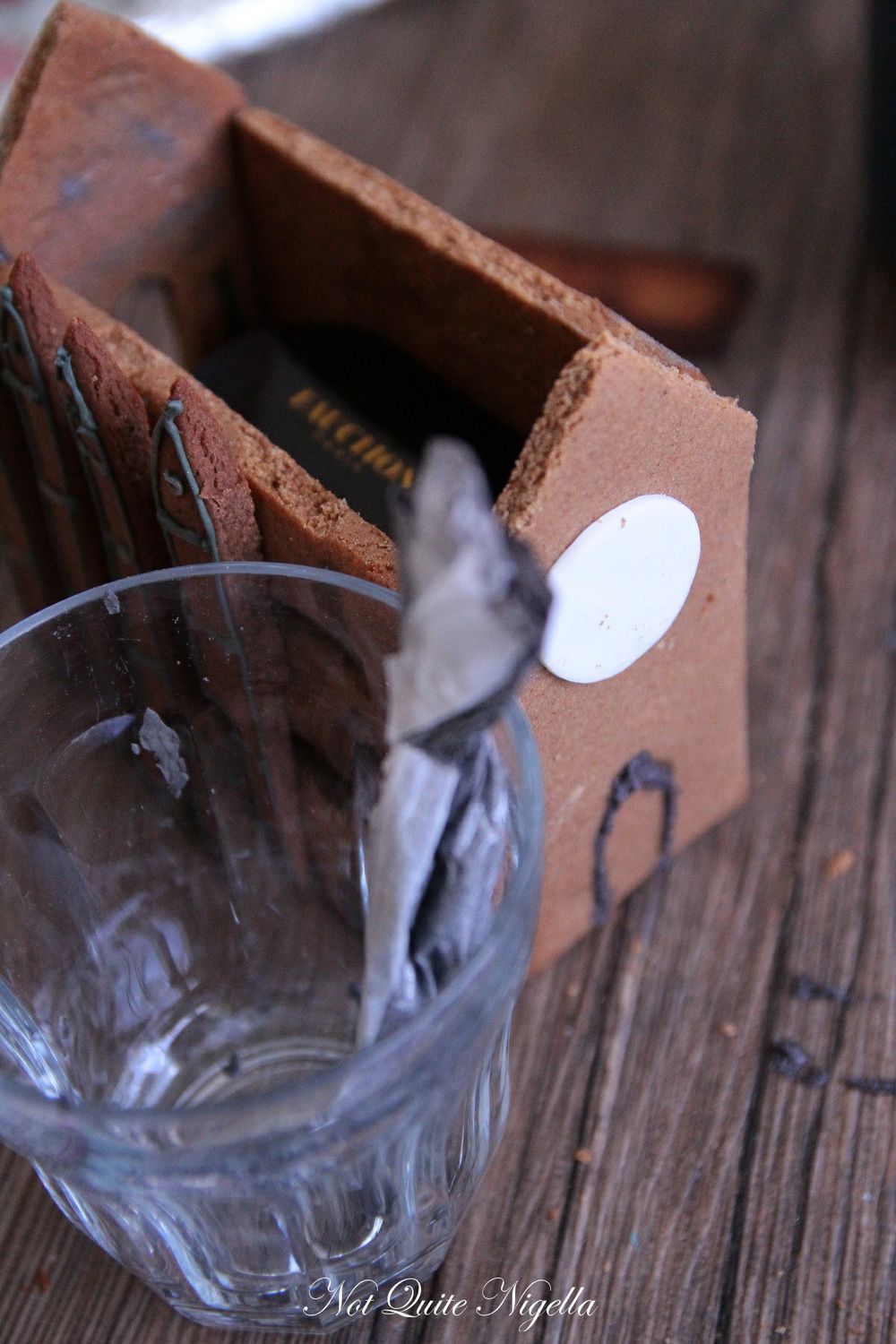 Allowing the royal icing on the clock tower to set 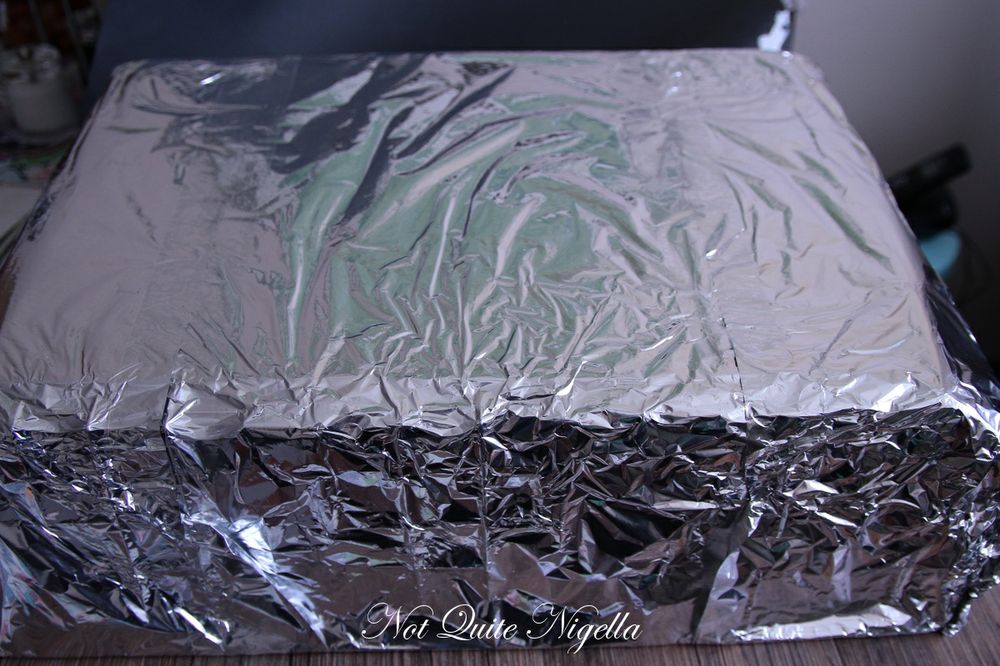 Step 2 - Once the buildings are completed, cover the box with foil and tape it securely. Then cover with the black cardboard and tape this down too-I used double sided thick tape for this. Place the buildings roughly where you want them to sit and once you are happy with their positioning. Using the royal icing on the bottom of them adhere them to the cardboard and allow to dry. 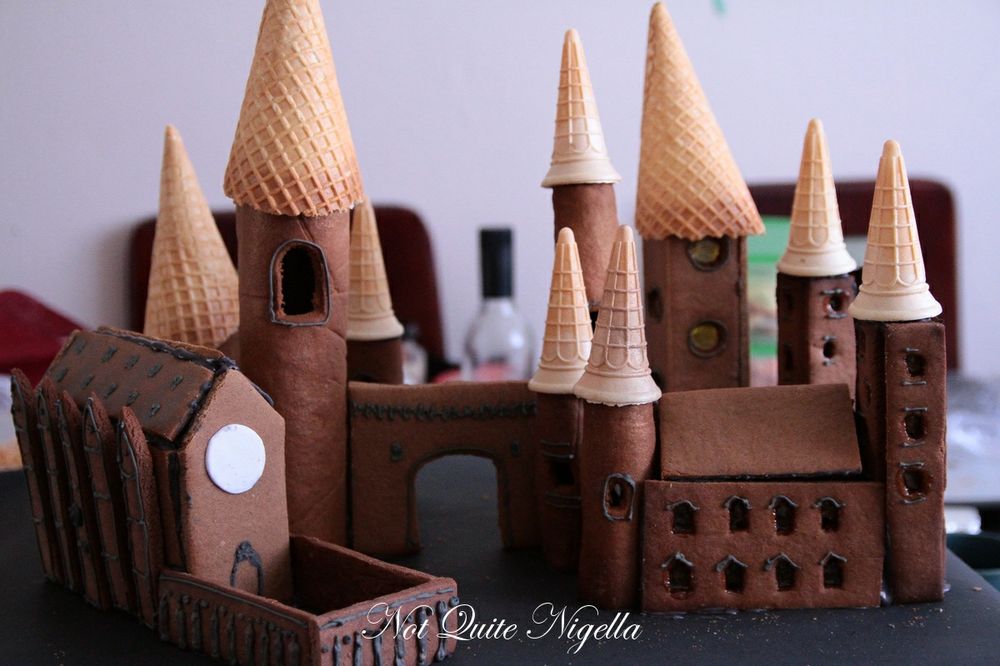 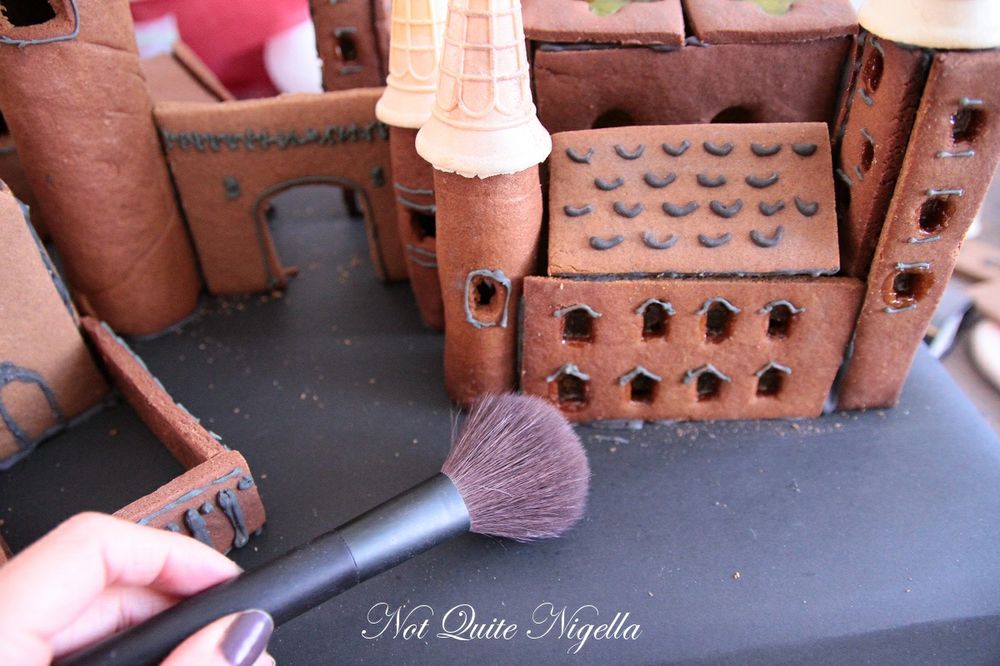 Using a brush, remove the crumbs from the base

Step 3 - In a ziplock bag add the coconut and some drops of green food colouring and shake about until the colour is evenly distributed-add more green if needed. Melt chocolate and using a spatula, spread it across the area of black cardboard which is uncovered. Sprinkle the green coconut over it to resemble grass.

Step 4 - Then mash up half of the chocolate mud cake with the ganache and make crumbs for rocks and cliffs. With the remaining half, break off "boulders" of cake. Sprinkle some of the coconut as moss and add the chocolate rocks. 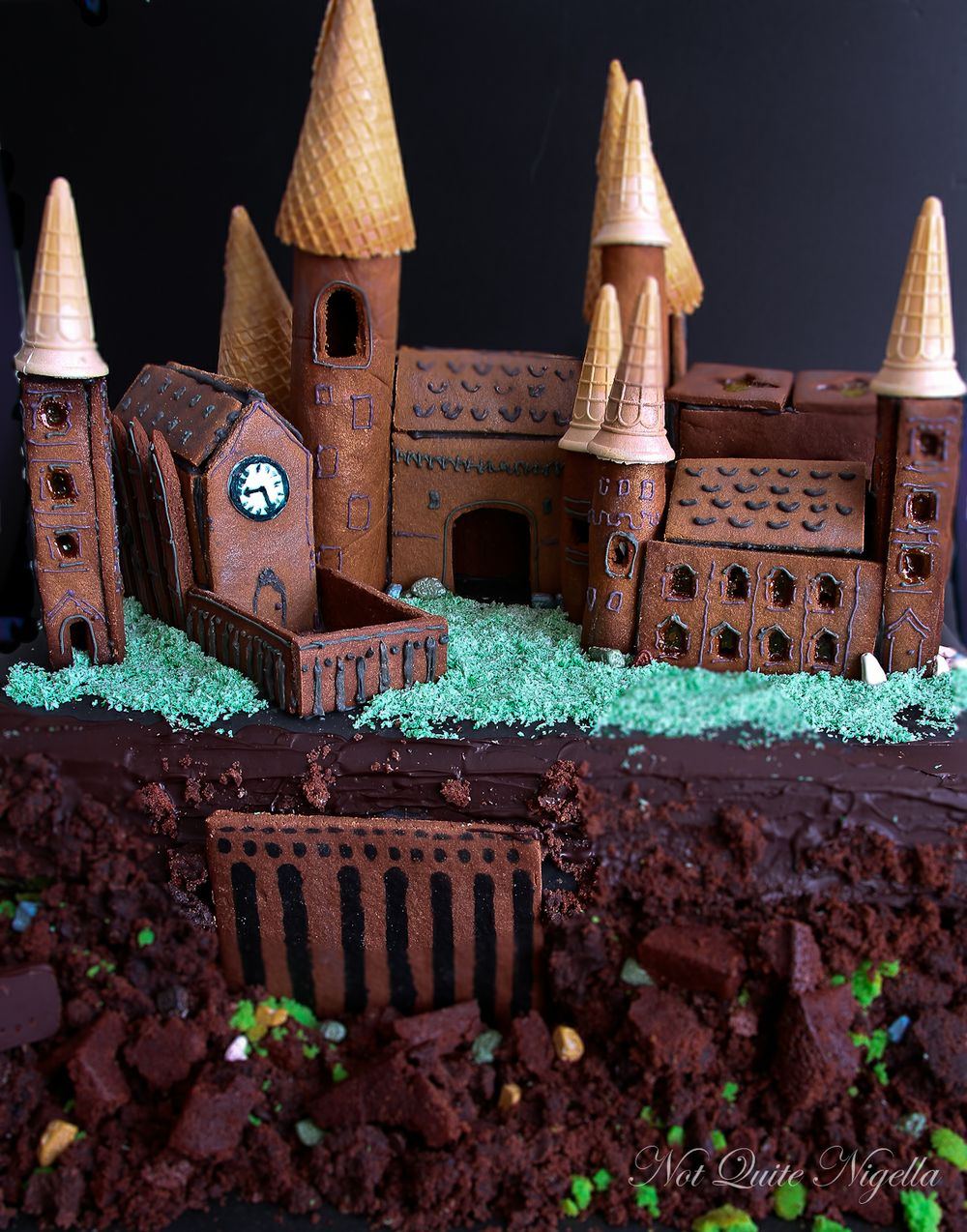