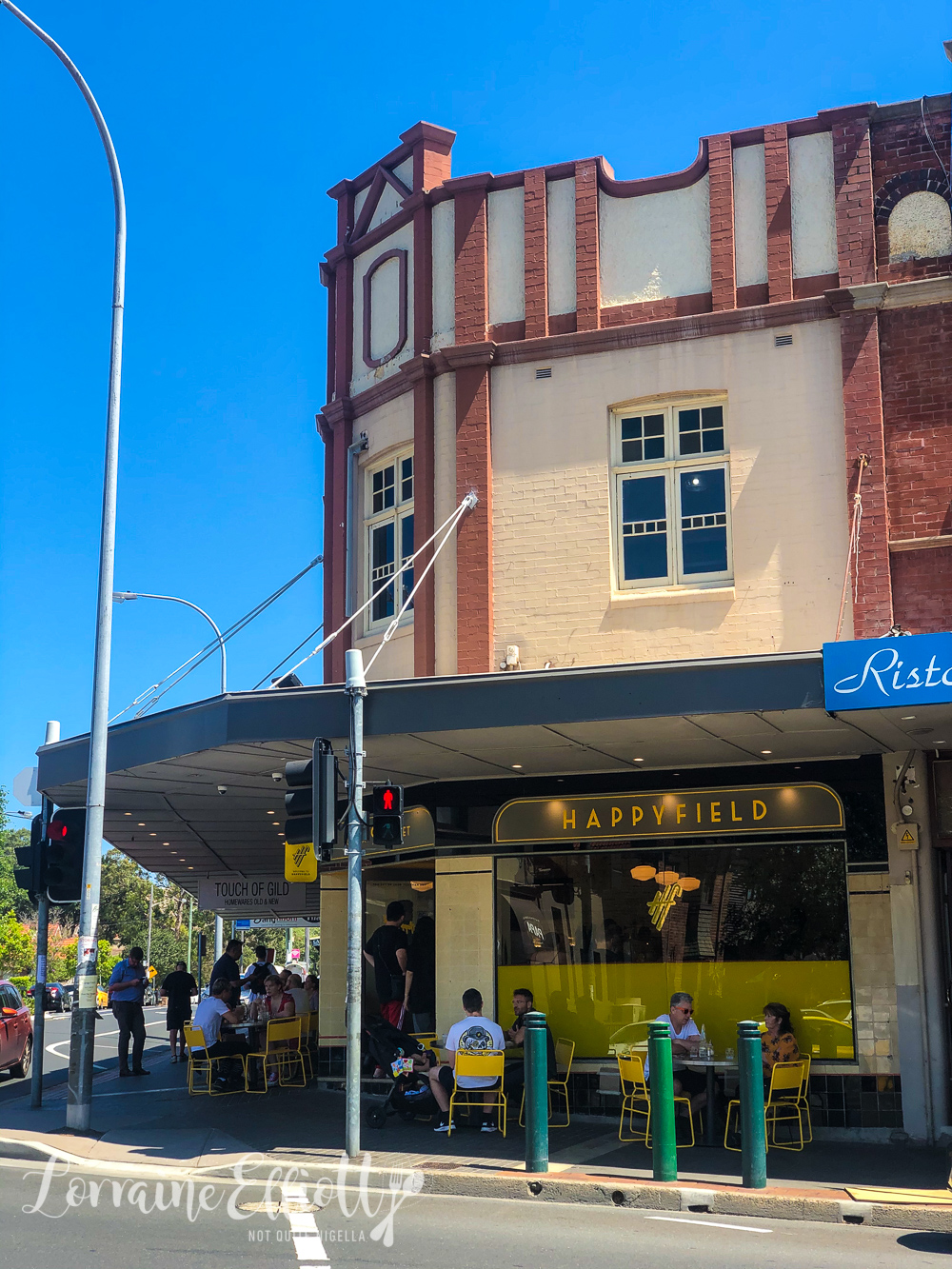 Happyfield is a brand new cafe in Haberfield on the corner of Ramsay and Dalhousie streets. This bright yellow cafe has created an enormous buzz with their breakfast and lunch menu with a sky-high pancake stacks, burgers and McLovin Muffins by Canadian chef Jesse Orleans formerly of The Grounds. 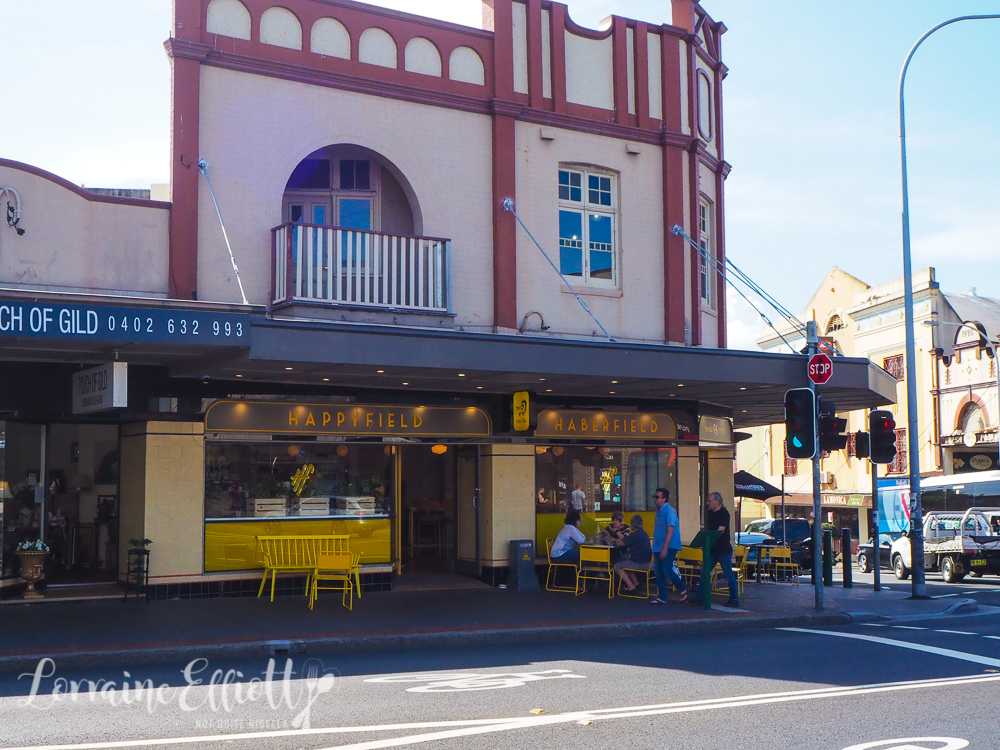 I received a text from my friend Laura S. on Saturday. "FYI new cafe alert. This just opened in Haberfield," she said. Then came the flood on social media of friends that are Haberfield locals visiting Happyfield. 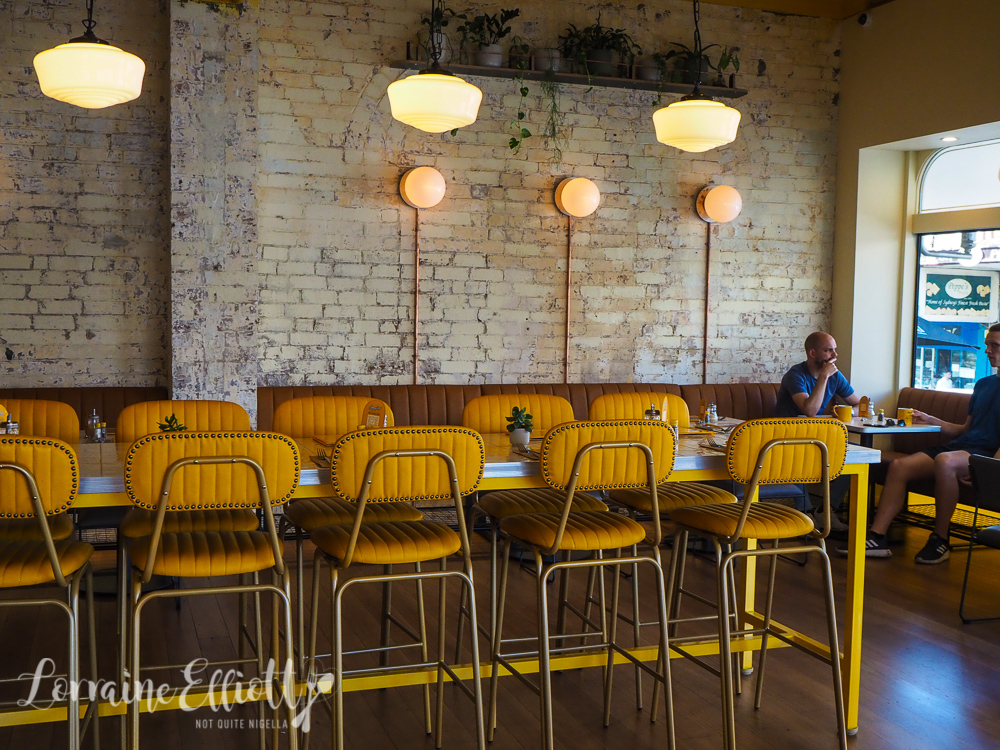 The duo behind Happyfield are Chris Theodosi (front of house) and Jesse Orleans (chef). Jesse is from Toronto in Canada and has worked at The Grounds for four years which is where the pair first met. 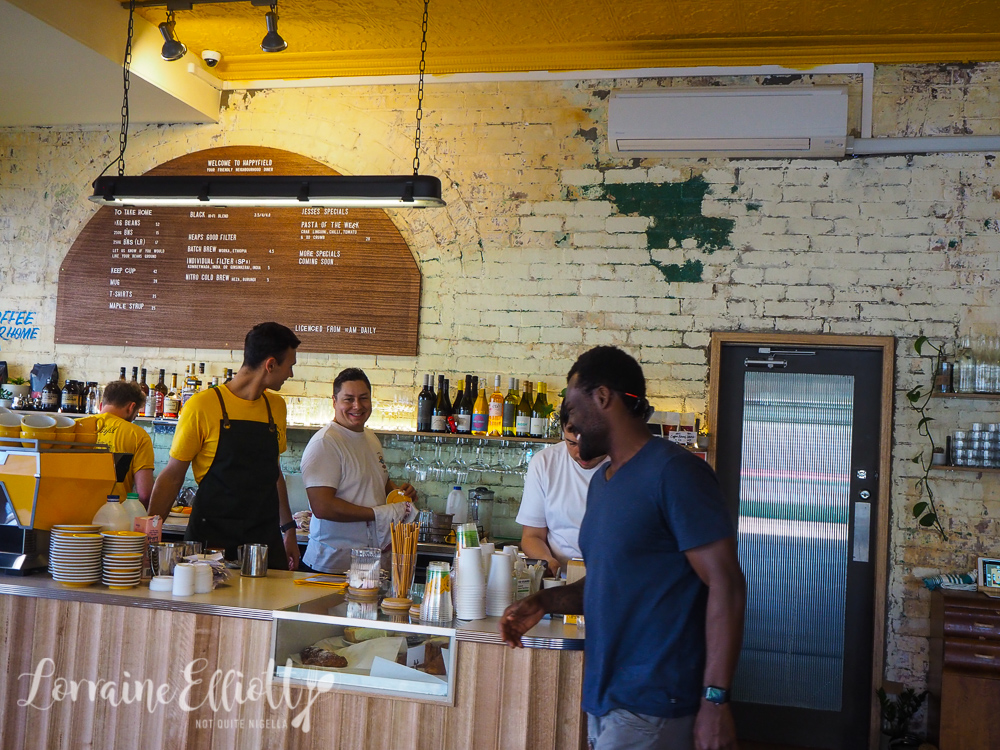 They originally looked in other inner west areas like Balmain before settling on this location in Haberfield. They got the keys at the beginning of March when COVID-19 first hit but officially opened on the 9th of October. 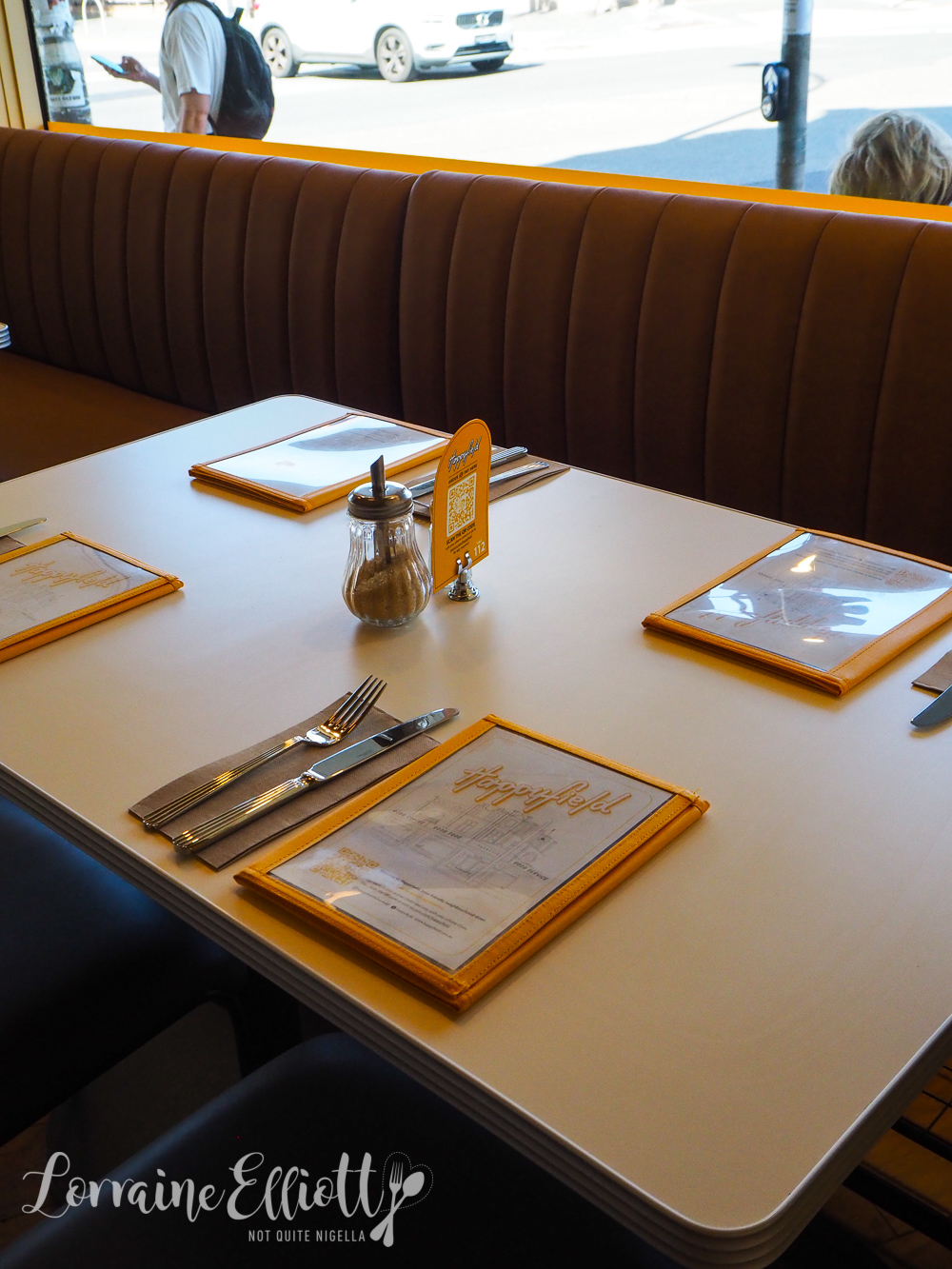 Getting a table can be tricky (and forget weekends unless you are prepared to queue, try for a weekday at least for this first while). As it is so new they're developing systems. Soraya and I both arrive just after 1:30pm and want a table outside and it's a short wait. Inside looks gorgeous with the yellow pressed tin seating, yellow leather booths and a slightly retro happy feel to it which was all done themselves. 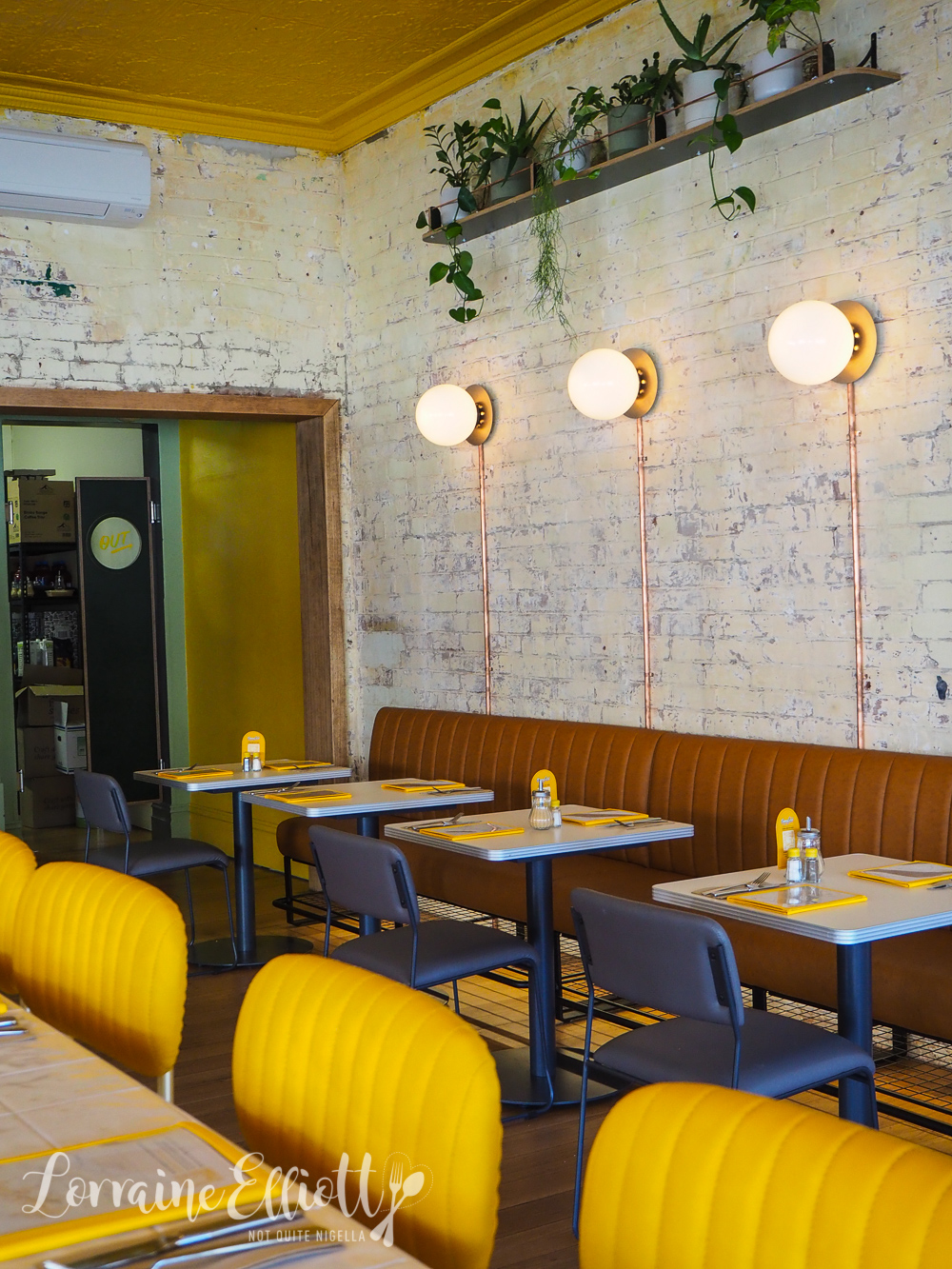 The menu is a fold out menu with breakfast and lunch options, most that go all day. There's a whole bunch of sides that you can add to any main meal as well as a Happy Platter for Two but that is really for elite athletes or people with enormous appetites. 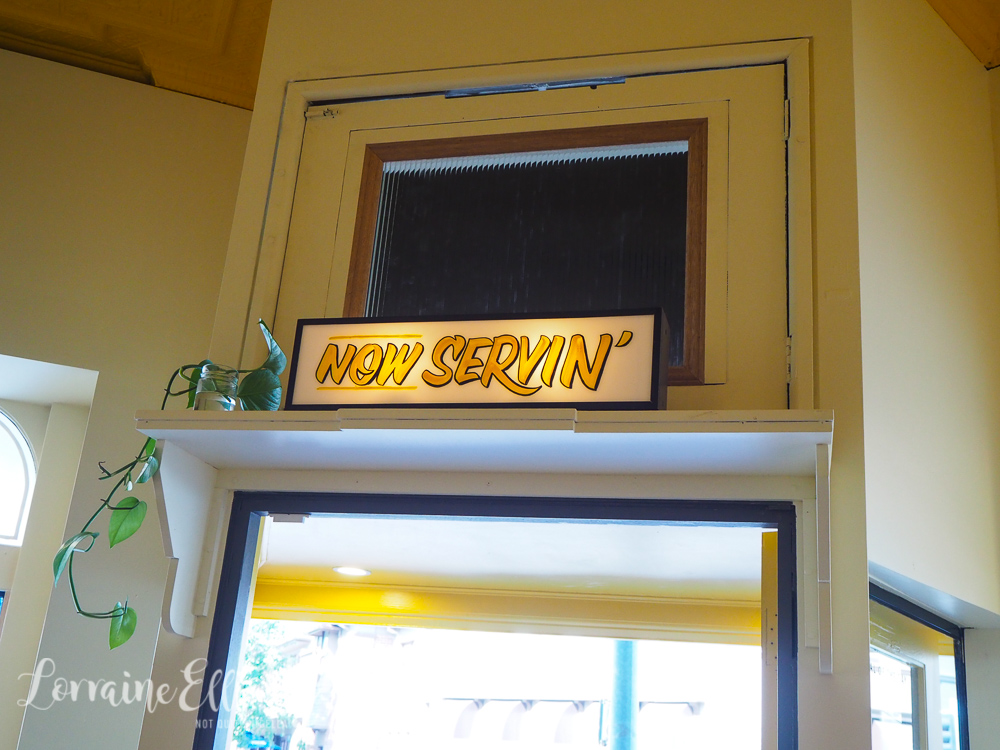 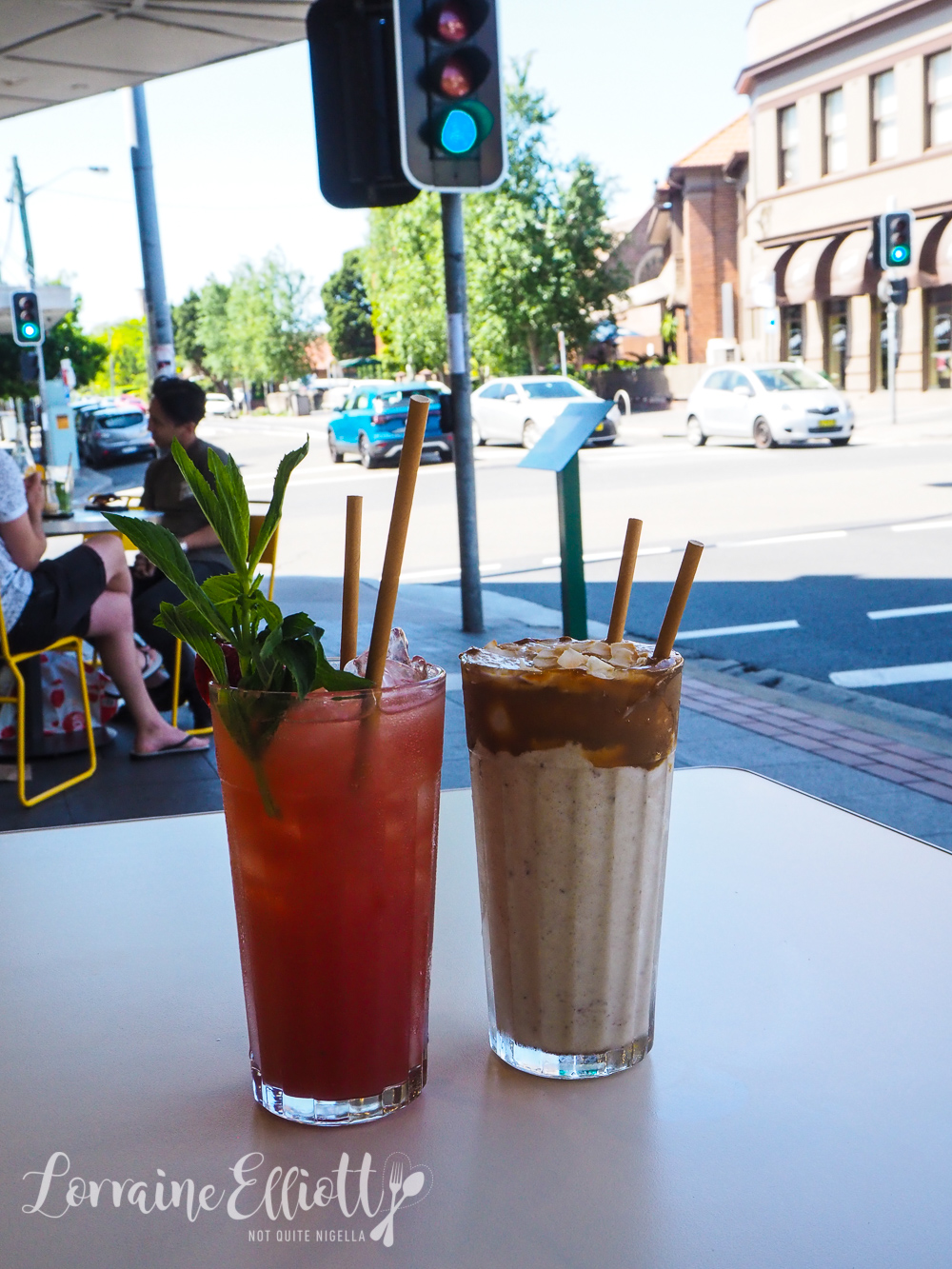 We order two drinks from opposite ends of the spectrum. The pink juice is made with watermelon, strawberry and mint and is delightfully refreshing. We also try the Sticky Date shake which is made with dates, dulce de leche vanilla ice cream and milk and while it sounds like it might be sweet and rich, it's also ridiculously good. 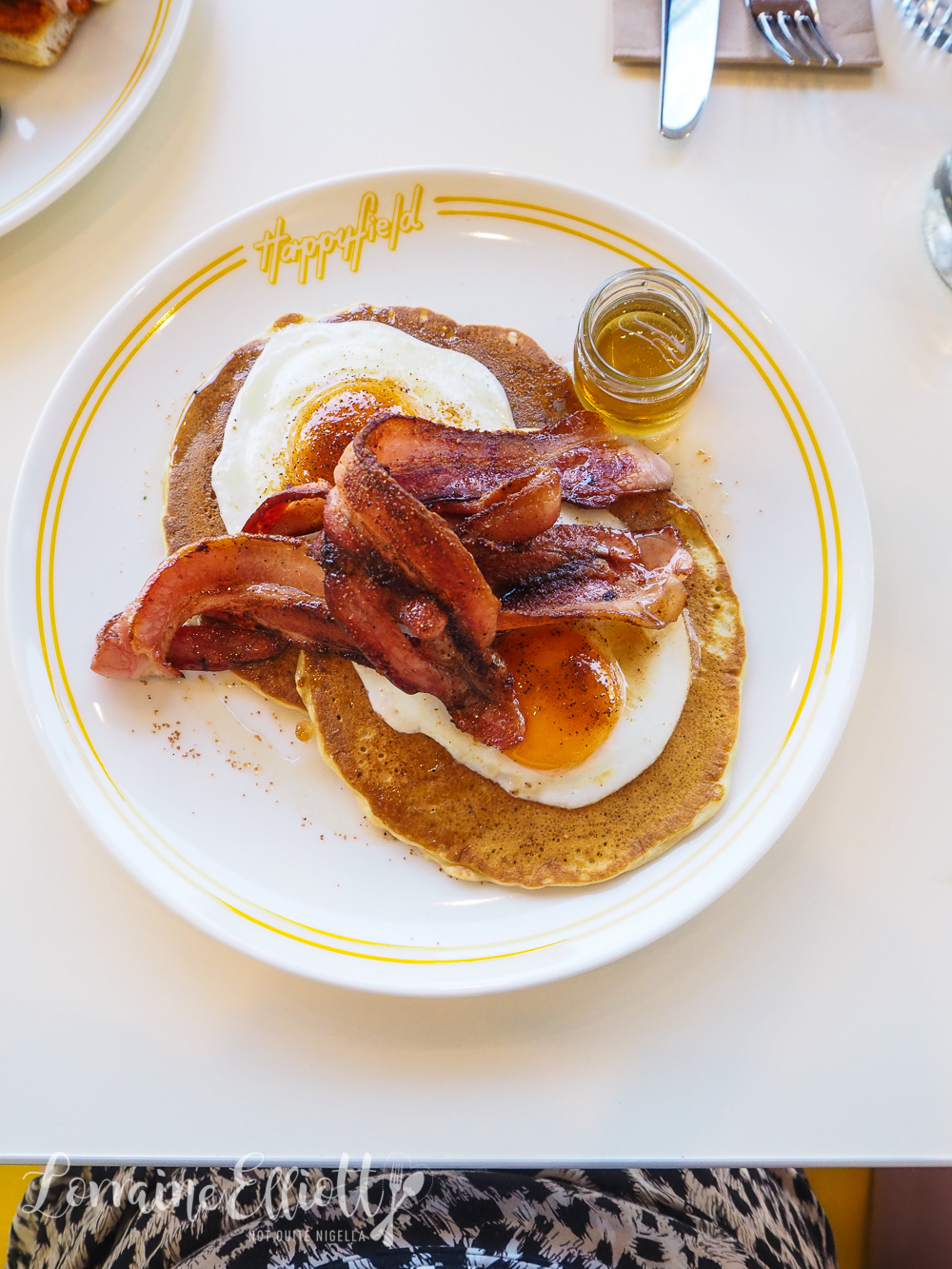 Pancakes are their thing at Happyfield and there are four options including a menu item where you can ordering a stack ranging from 4-15 pancakes in size. We go for their most popular, their savoury stack which is two pancakes, two fried eggs sunny side up, crispy bacon, Pepe Saya butter with 100% Canadian maple syrup. With Jesse's Canadian background the maple was always going to be the real stuff and this Grade A maple syrup is from the first extraction or pressing that makes for a lighter coloured, fruity flavoured maple syrup. The pancakes are fresh, light and fluffy but not thick or dry as I sometimes find them. This whole dish is simple in concept but perfect in execution. 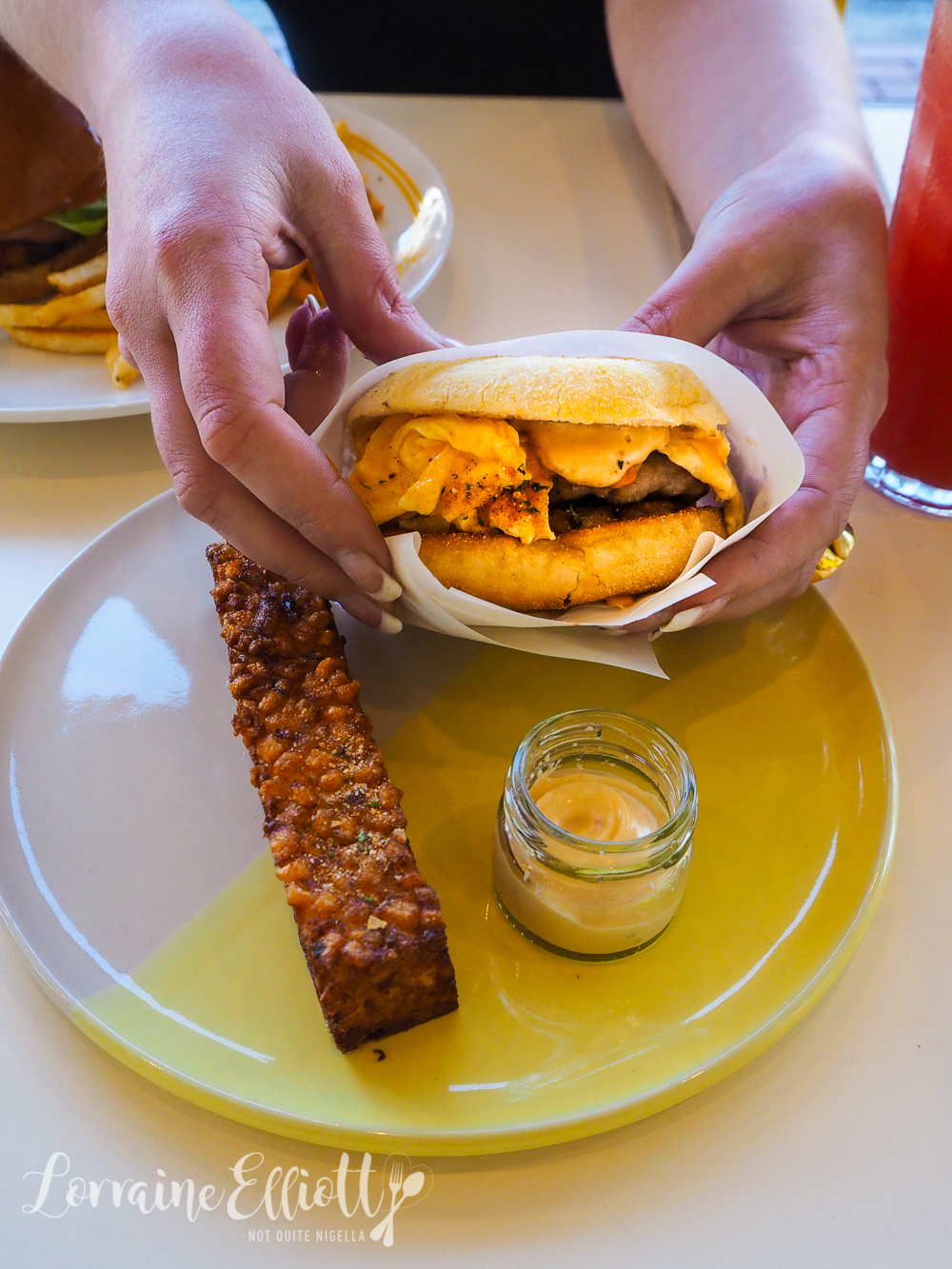 The menu has influences from French cafes, Eggslut and McDonalds and the McLovin is their take on a sausage and egg McMuffin. It's two chicken sausage patties, folded scrambled eggs, cheddar cheese, chipotle mayonnaise and chicken and herb salt. Soraya and I are completely taken by this and the balance of flavours. "This is so good, I'm going to eat my entire half," says Soraya which is a big call because we've got four dishes in front of us. Oh and the potato hash brown on the side is presented as a slender, crispy potato hash brown with a side of chilli mayo and is another must order. Soraya and I can see this pairing being very popular on weekends as a hangover cure. 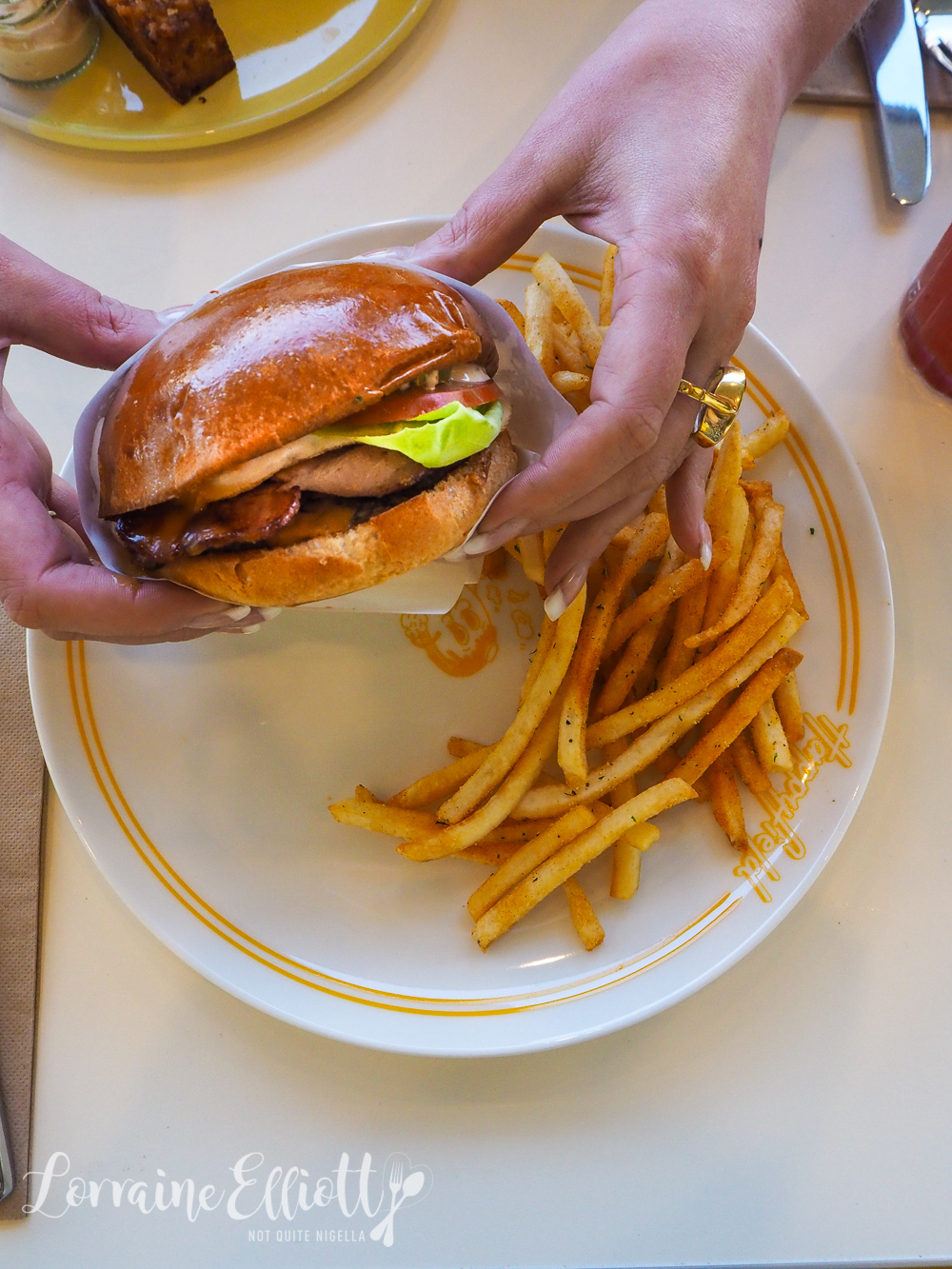 The Good Burger is named after the 1997 movie of the same name and is only available from 12pm. It's a chuck and brisket beef patty with lettuce, tomato, cheddar, pickles, onion and "Happy sauce" with a side of spiced fries. I added on a fried egg and bacon. It's fantastic-juicy, dripping, luscious with so much flavour. 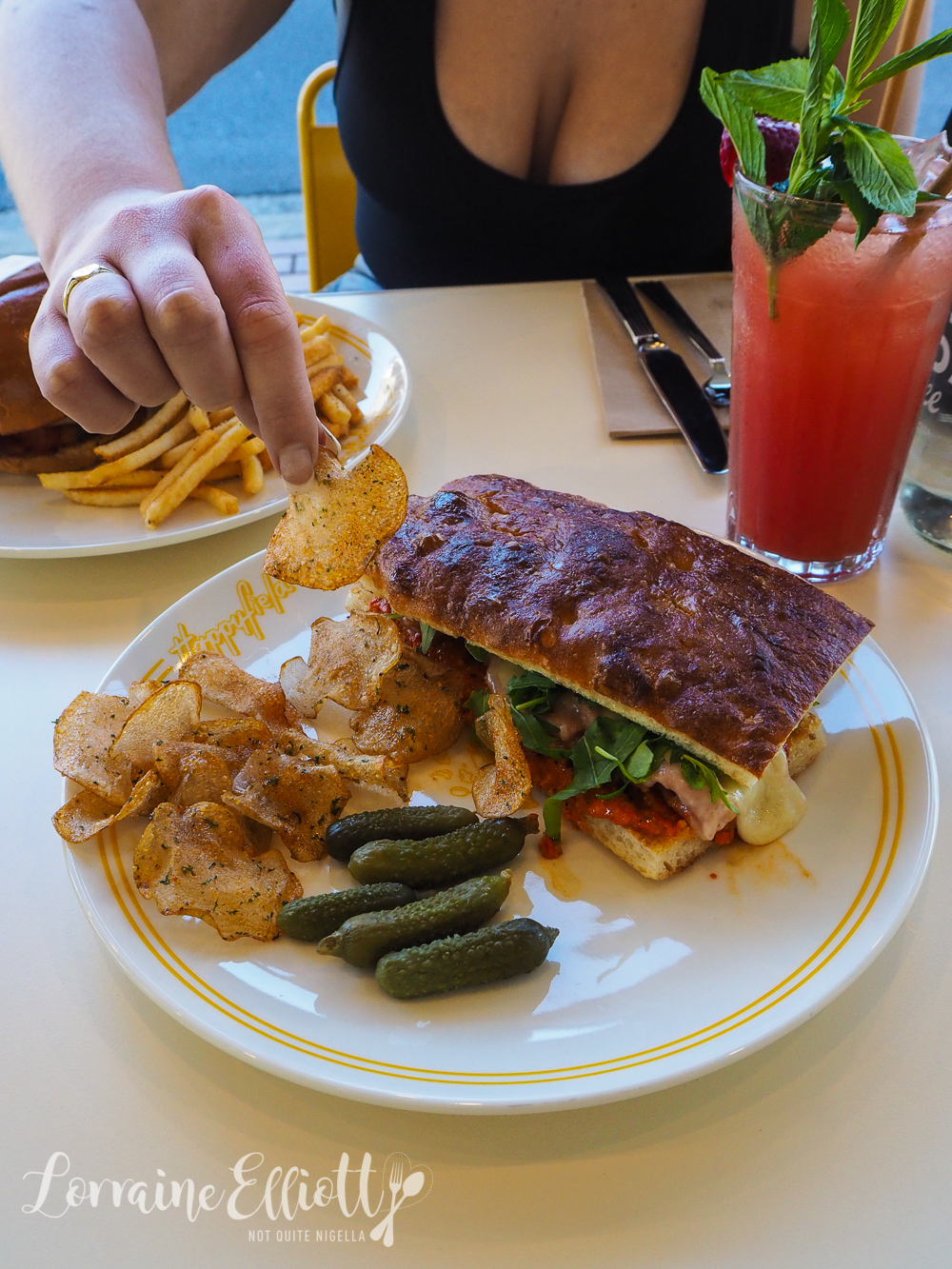 We managed to nab the very last A La Mortadella sandwich because a big table of Italian customers (one of whom is a friend of mine) all ordered this sandwich. It's normally on a salted ciabatta roll but they had run out so our is served on a focaccia with Haberfield mortadella, provolone, romesco sauce and rocket with cornichons on the side and house cut potato chips. The potato fries are crunchy and we love the herbs on it too - Jesse has to make these potato chips fresh every day. "The chips have more spices than KFC," quips Chris. The sandwich is best eaten if you add the cornichons and chips inside and I think I'd prefer more mortadella inside.

The sweets are sourced all from good local bakeries (for the moment at least). There are big plans ahead as they want to be open for dinner soon as they are one of the few restaurants in Haberfield with a liquor license.

So tell me Dear Reader, do you mind queueing for a table or would you rather visit a place during a quieter time? Which dish do you like the look of the best?