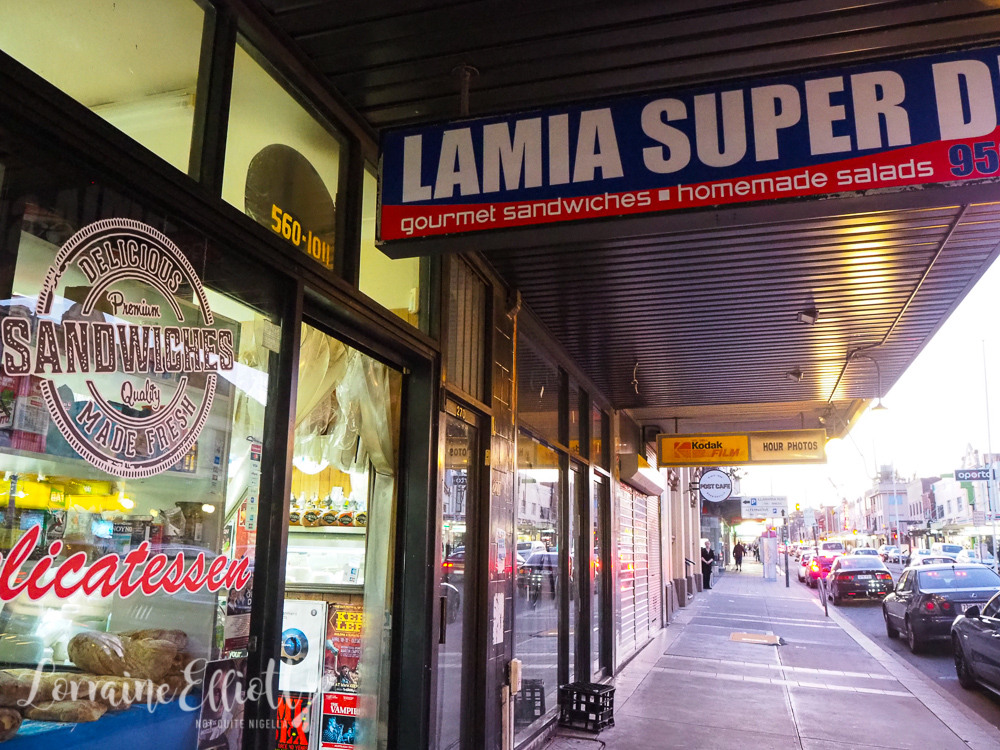 Lamia Super Deli is where to head if you are looking for Greek treats. This small but well stocked Marrickville deli is a treasure trove of goodies from a jaw dropping selection of olives to Greek cheeses, smallgoods, olive oils, honeys - it's all Greek! 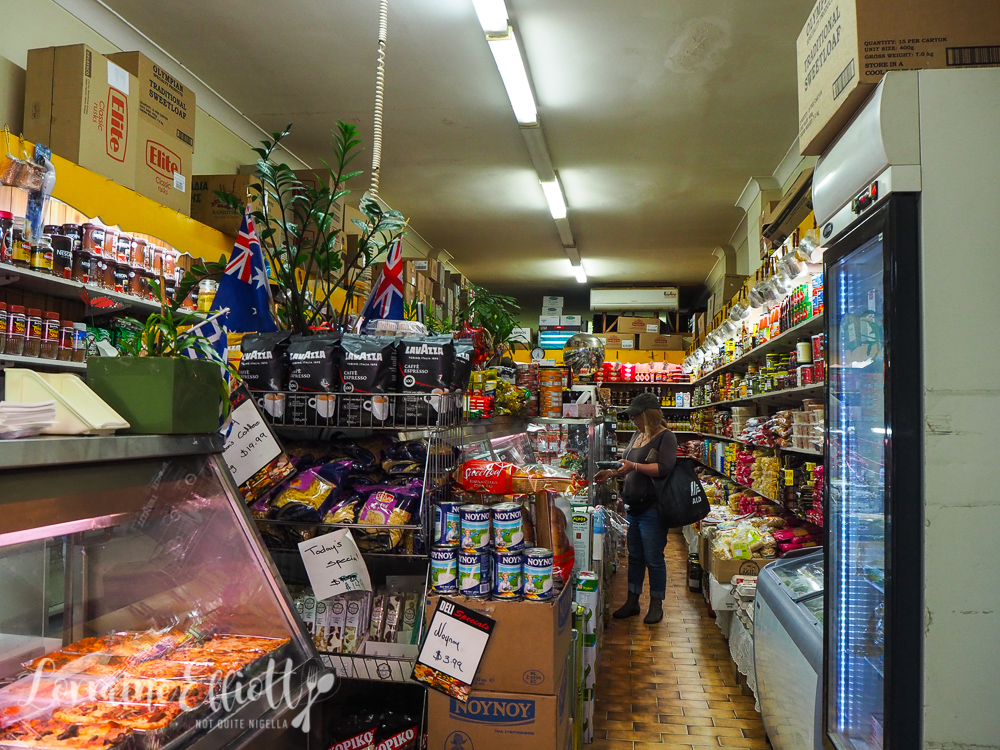 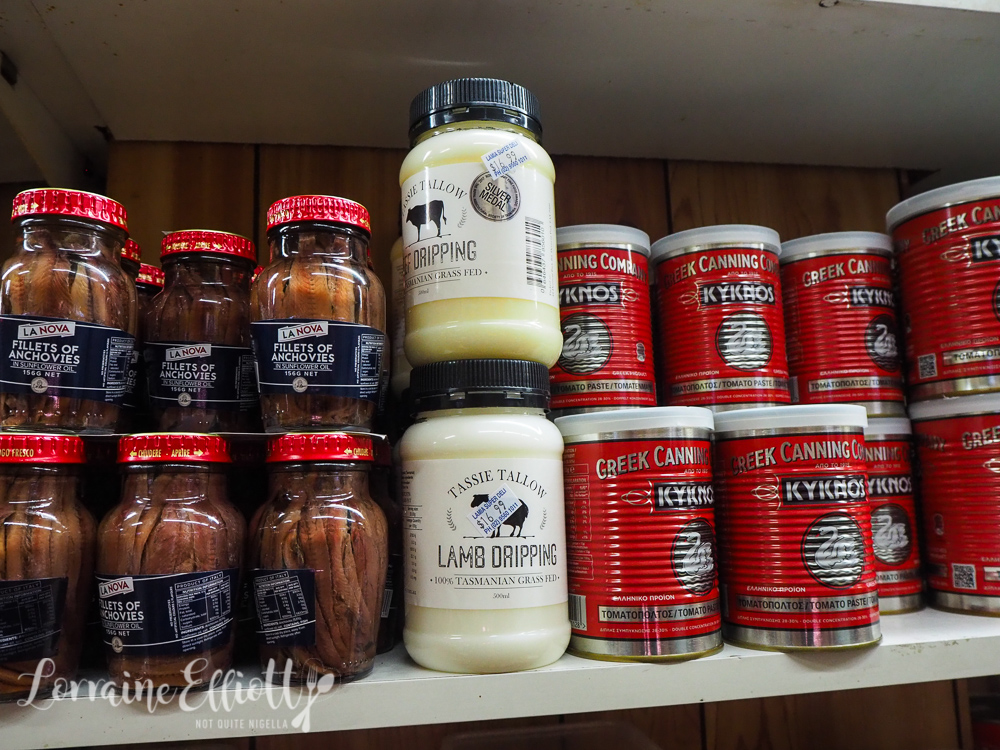 "You want to try some?" says Jim Cotsinis from behind the counter. He and his father Harry Cotsinis and staff member Stella are busy tending to customers in the deli. Harry bought the Lamia Super Deli from the original owner Paul Haralabis after working there himself from the age of 25. It was named after the Greek city Lamia that Paul came from. 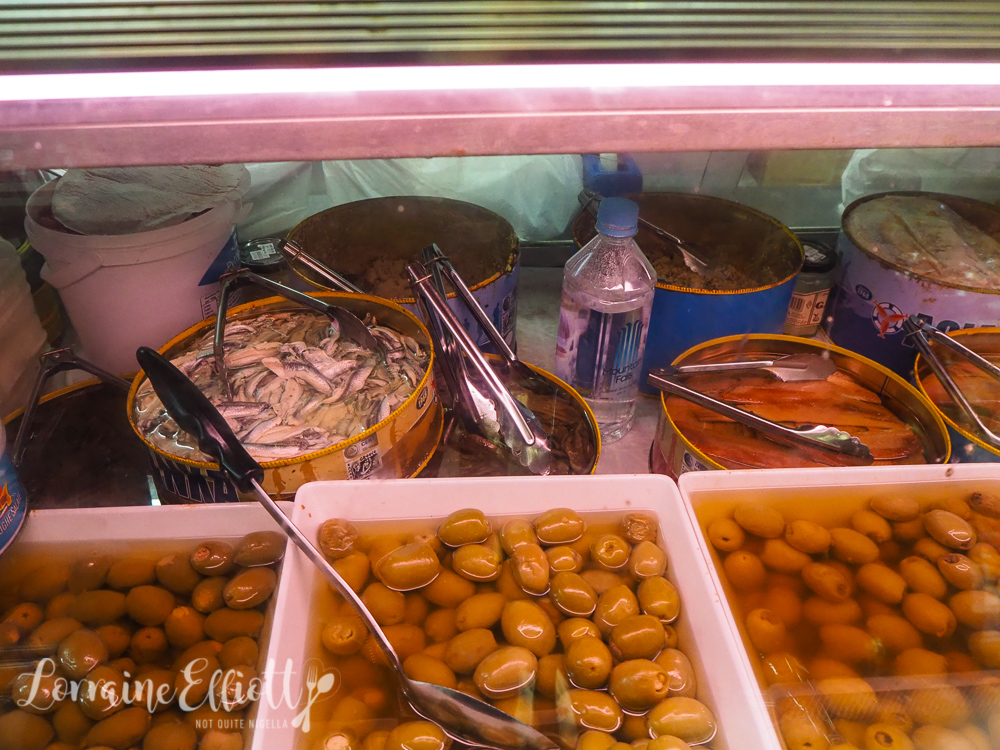 I first visited Lamia Super Deli a couple of months ago. Laura and I were in Marrickville having lunch and she needed to stop by the Greek deli to buy some things for an upcoming trip. 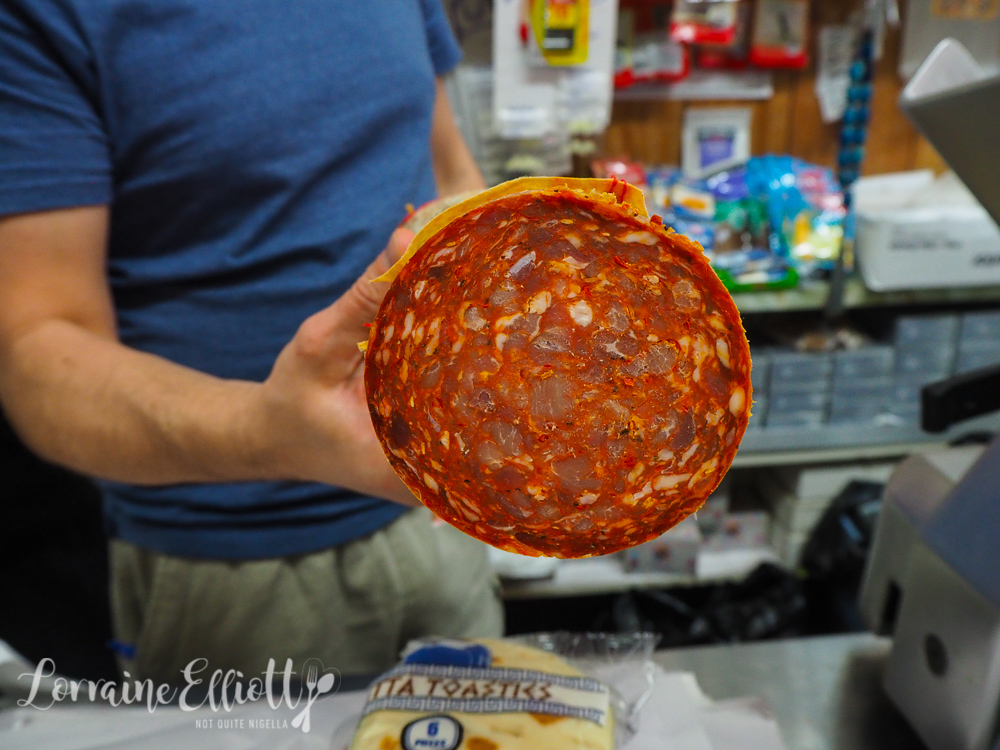 I'm somewhat familiar with Marrickville Road but have never seen this long, strip of a store. The first thing that you see when you enter is a display of cheese, striking in its whiteness and number. 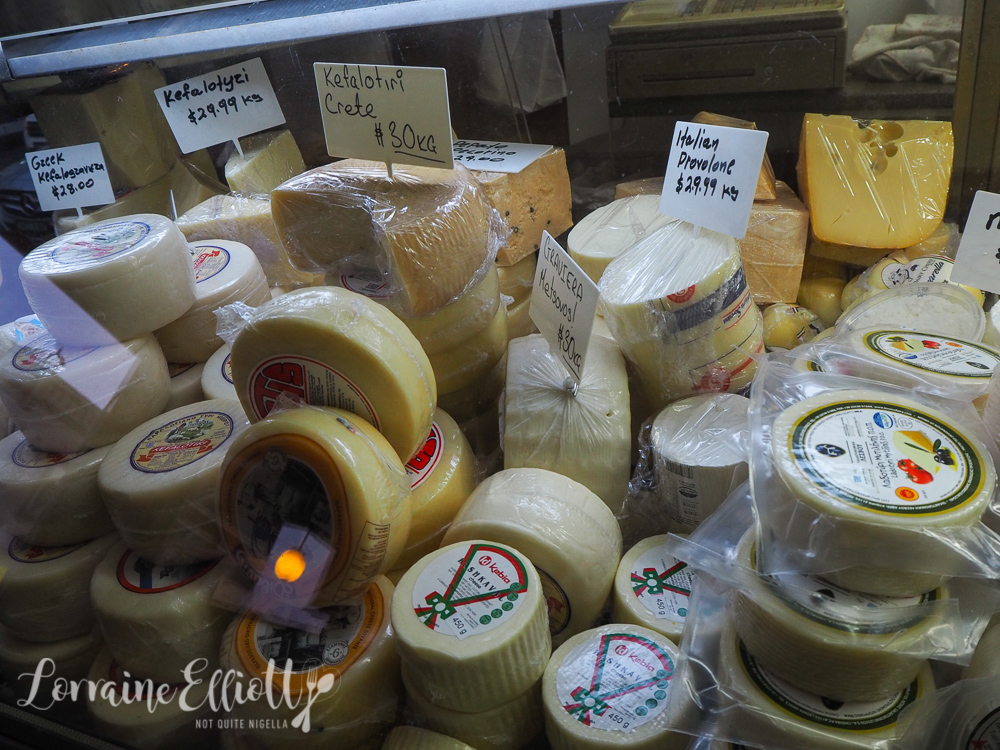 Greek cheese is usually made using sheep's or goat's milk so it doesn't have the yellow colour associated with cow's milk cheese. Then there is the range of salamis and hams and then your eye wanders down the store and you grab and basket and get lost for 20 minutes. 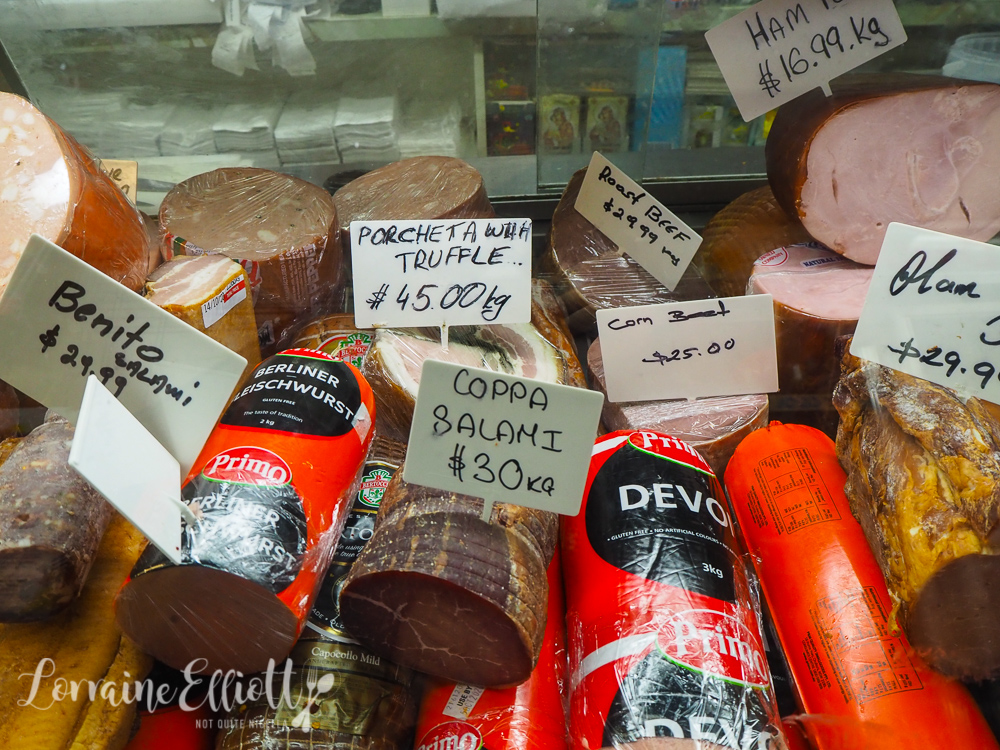 Laura needs some halva for dessert and Jim lifts a glass cloche to reveal a chocolate rippled halva. It's so striking that we both buy a slice but not after Jim offers us a taste first. That's the thing with delis like Lamia Super Deli. It's the service that you wish you got everywhere and they must know that chances are if you try it and like you'll buy it. But it doesn't seem all about sales. 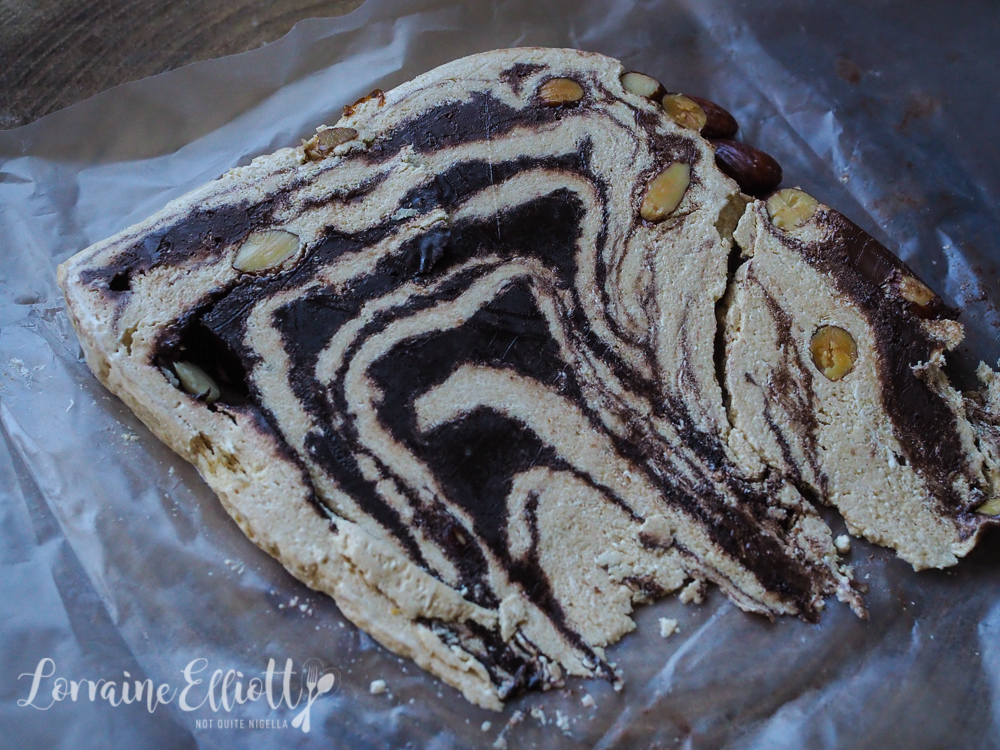 Jim tells me about a barrel aged goats feta cheese but it only comes in 1kg quantities which I tell him is too large for my small household. "Wait a minute," he says and gives us a piece to try even though we don't buy it. And yep it's delicious. 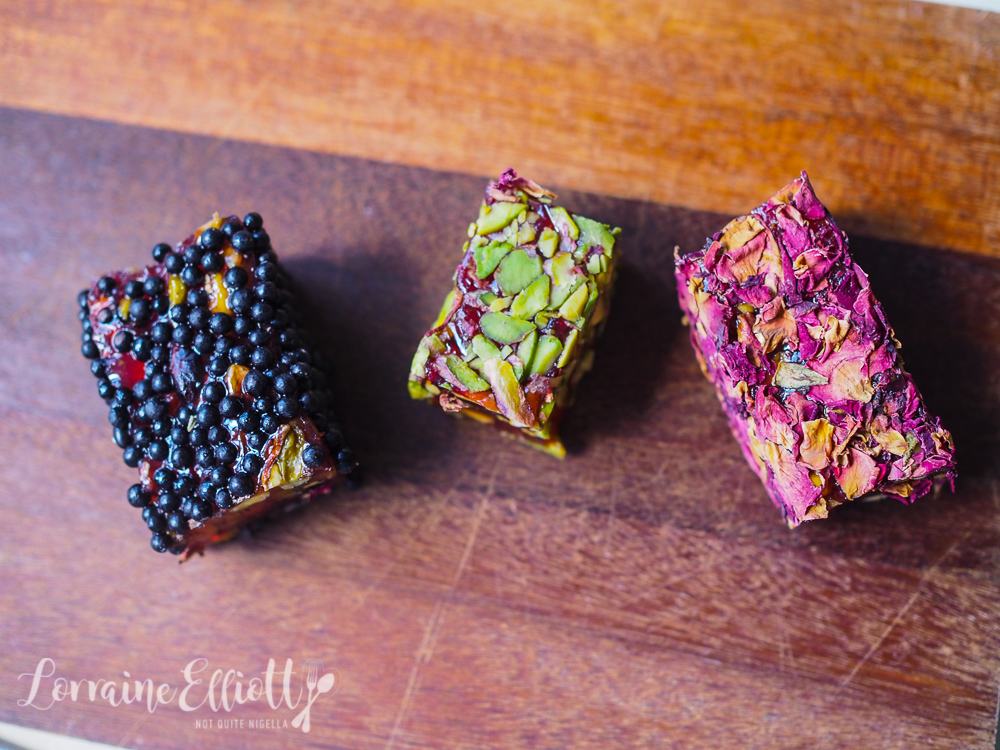 I buy some beautifully striking Turkish delight, one rolled in rose petals, another bright green pistachios and another in chocolate balls. It's a slightly extravagant purchase but worth it. 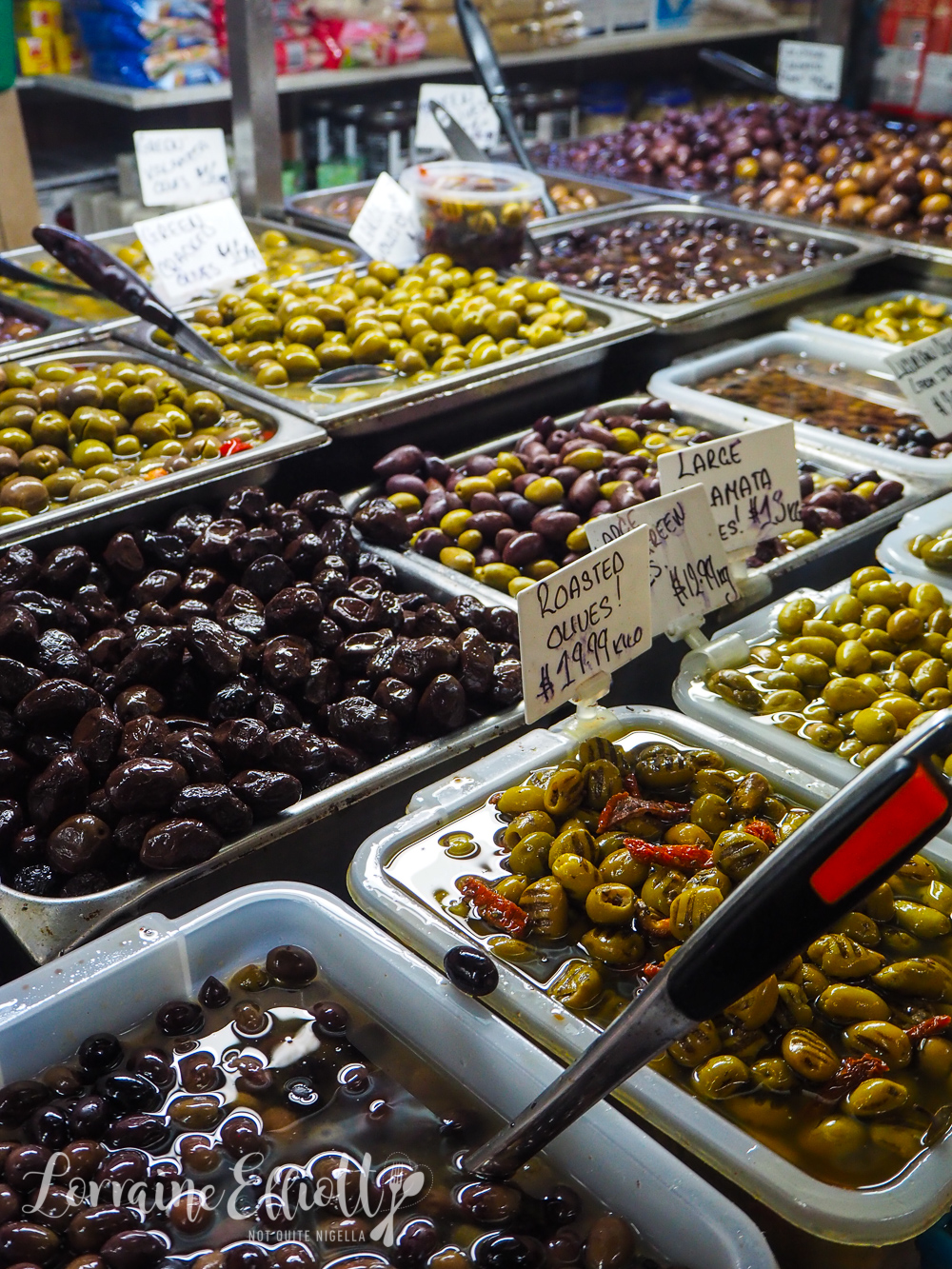 The olive selection is a sight to behold. There are so many varieties in myriad sizes and fillings. When we express an interest in large green olives stuffed with anchovies they give us some to try. They come with a sharp and satisfying punch of saltiness and umami. 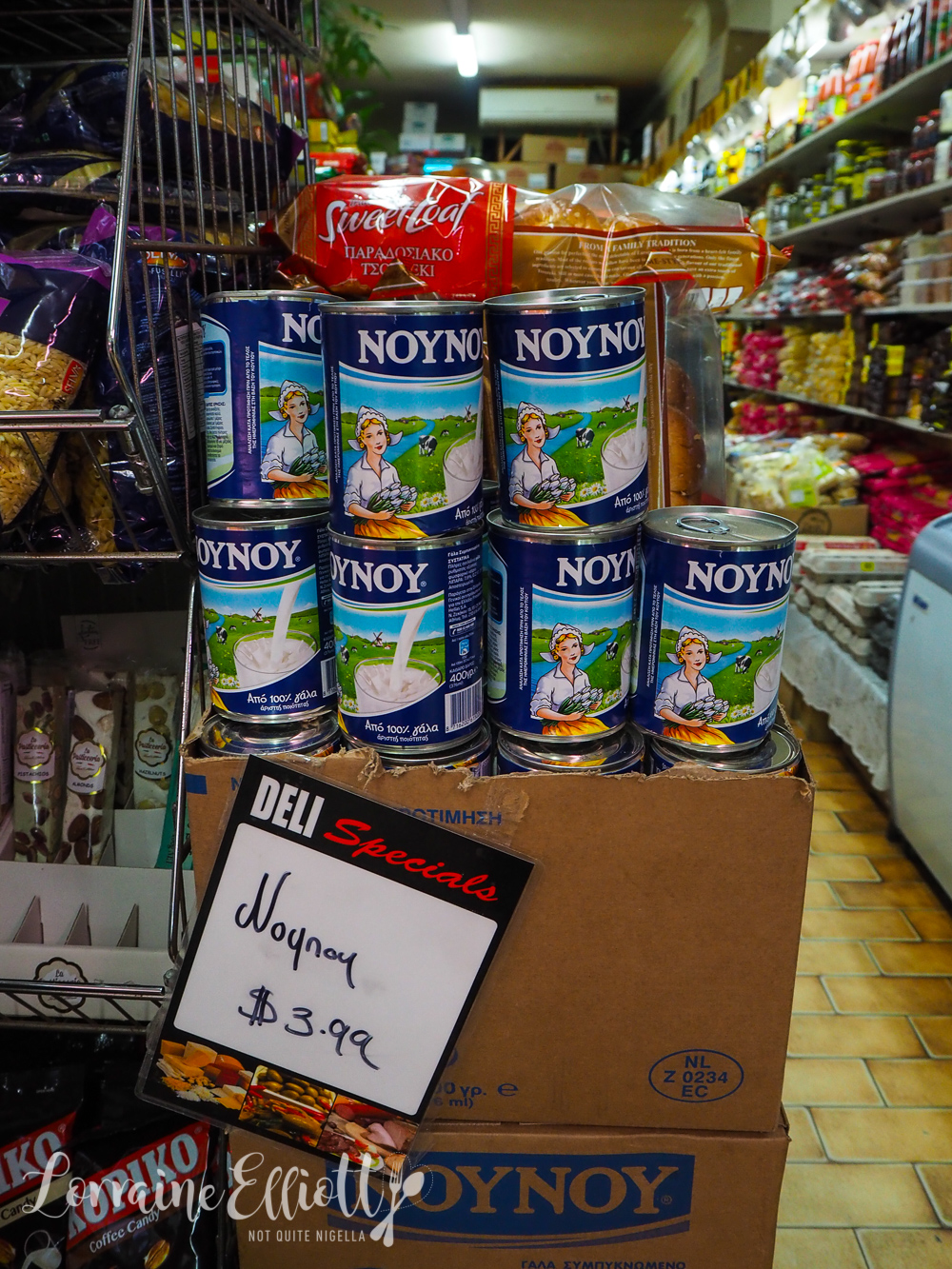 In the freezer there are frozen spanikopitas and plenty of cheeses and dips. I buy some things that catch my eye like a corn pudding mix and a sour cherry spoon sweet, usually served with coffee to guests. Harry and Stella tell us that they spoon sweets are great over vanilla ice cream. 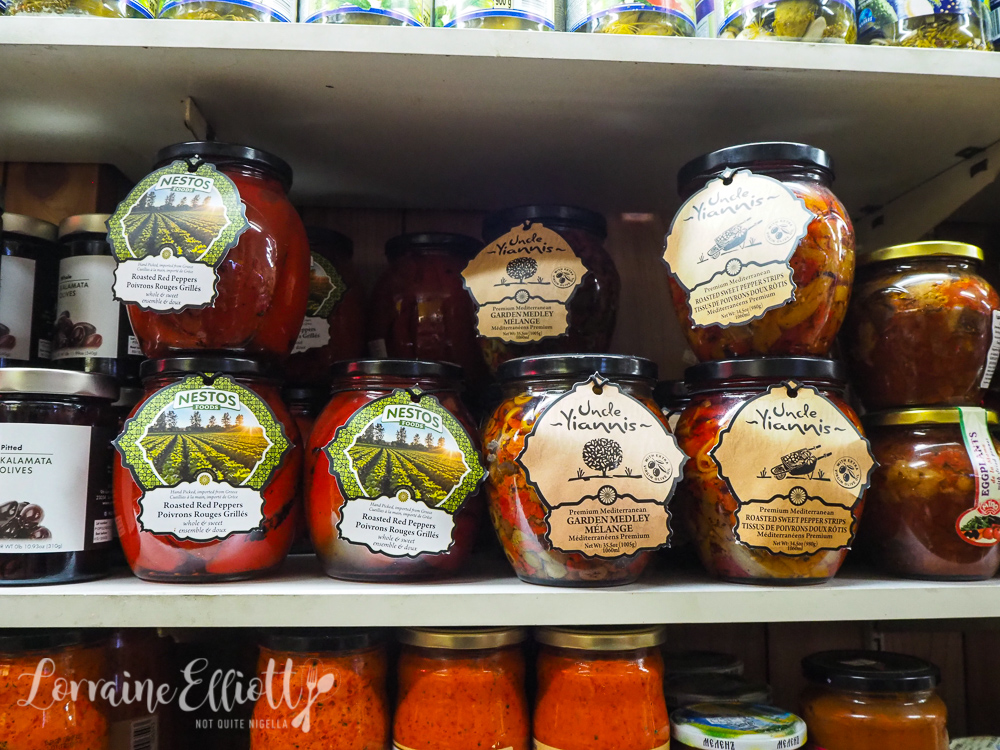 Prices are excellent. A gorgeous buttery extra virgin olive oil from Greece is $8.99 a bottle. And the honey which he warns me is pricey at $18.99 but has properties similar to Manuka honey. 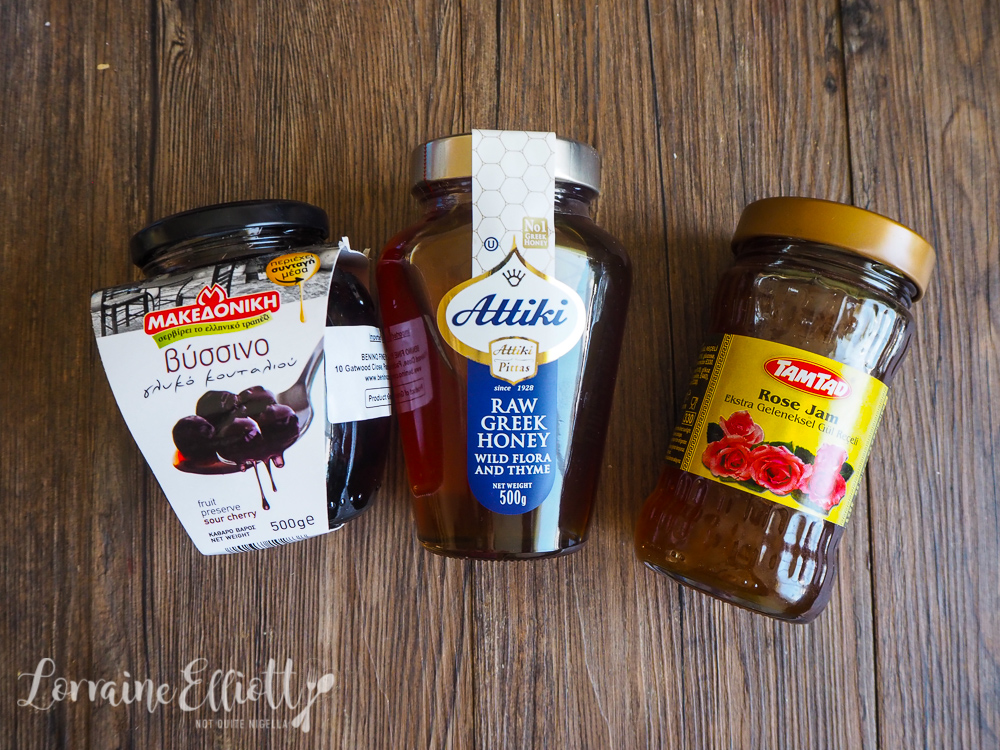 Lunchtimes are the time for sandwiches but as our visits are later in the day there are home style pastitsio, yemistas and moussaka. The eggplant yemista is stuffed with beef and rice and is pure delicious comfort food. 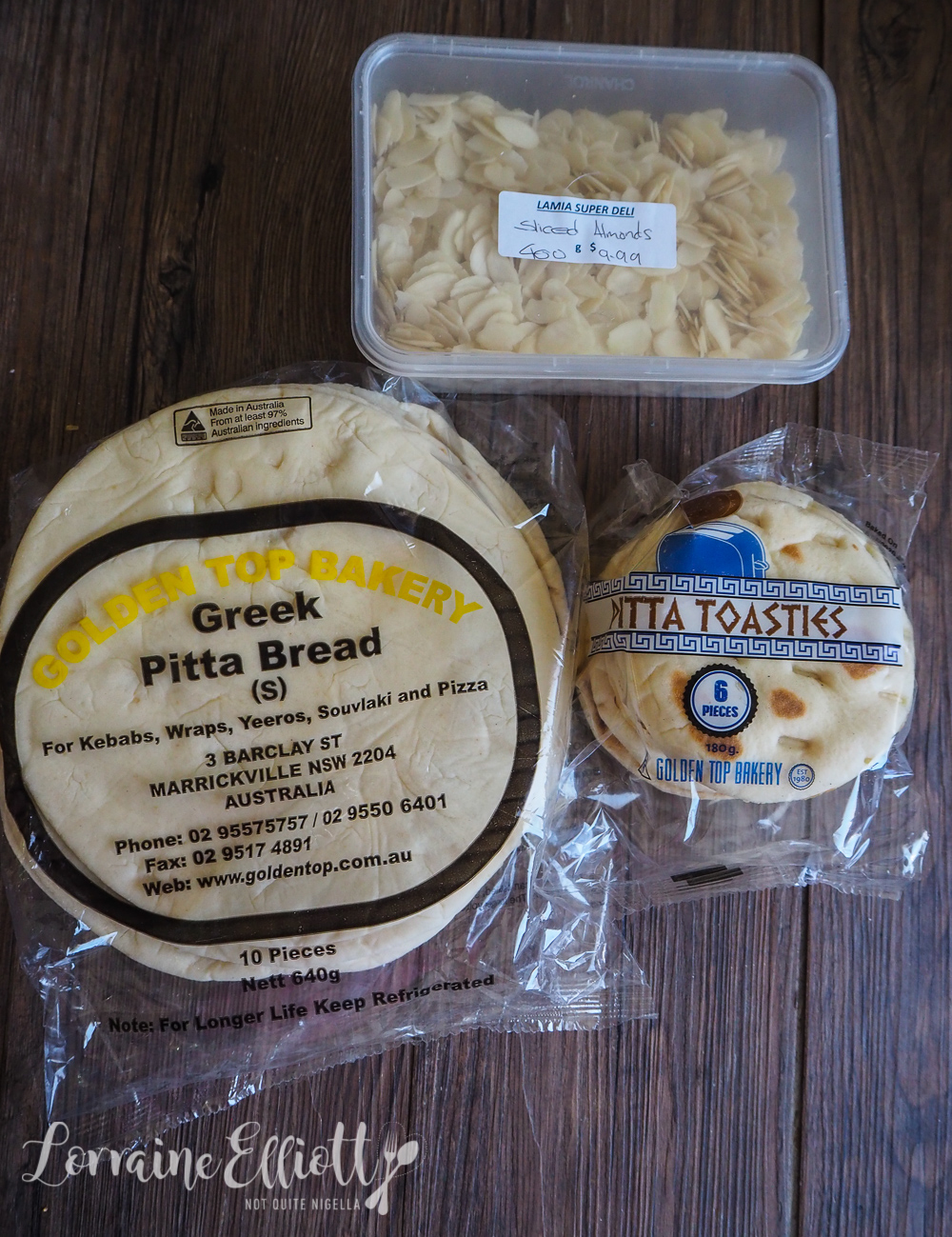 When I ask Jim how long they've been open he tells me and says that the store will be around as long as Harry is. He's reluctant to take over the reins because, "The margins aren't there," before offering to carry our bags to the car.

As we leave Harry is singing.

So tell me Dear Reader, do you buy from small delis like this? Do you often buy after you try something? 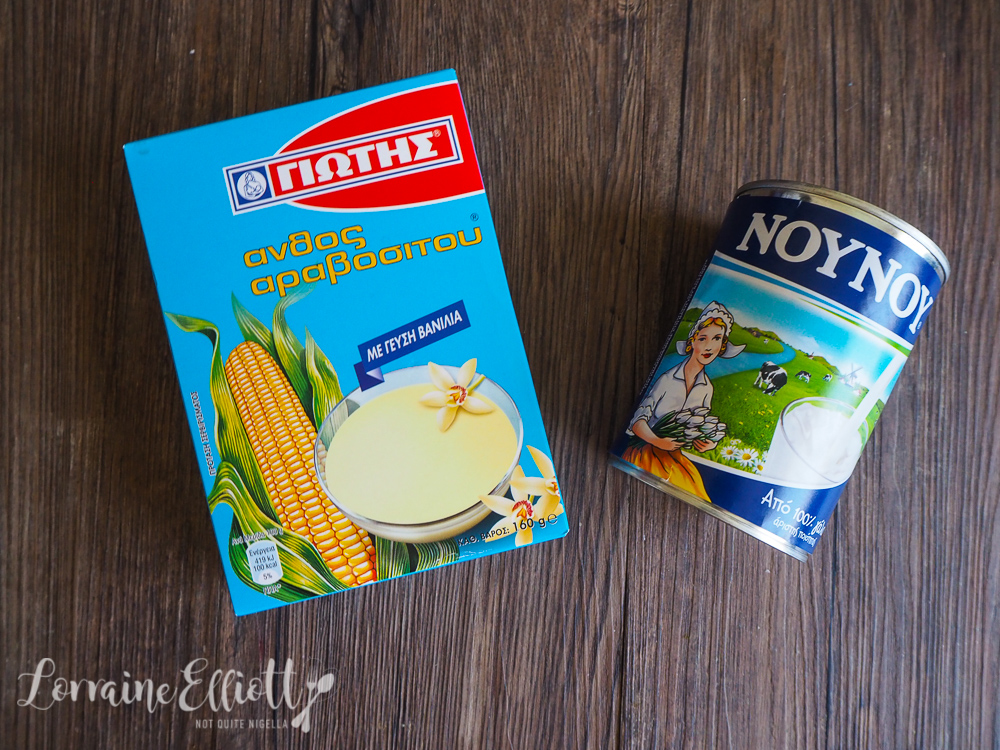