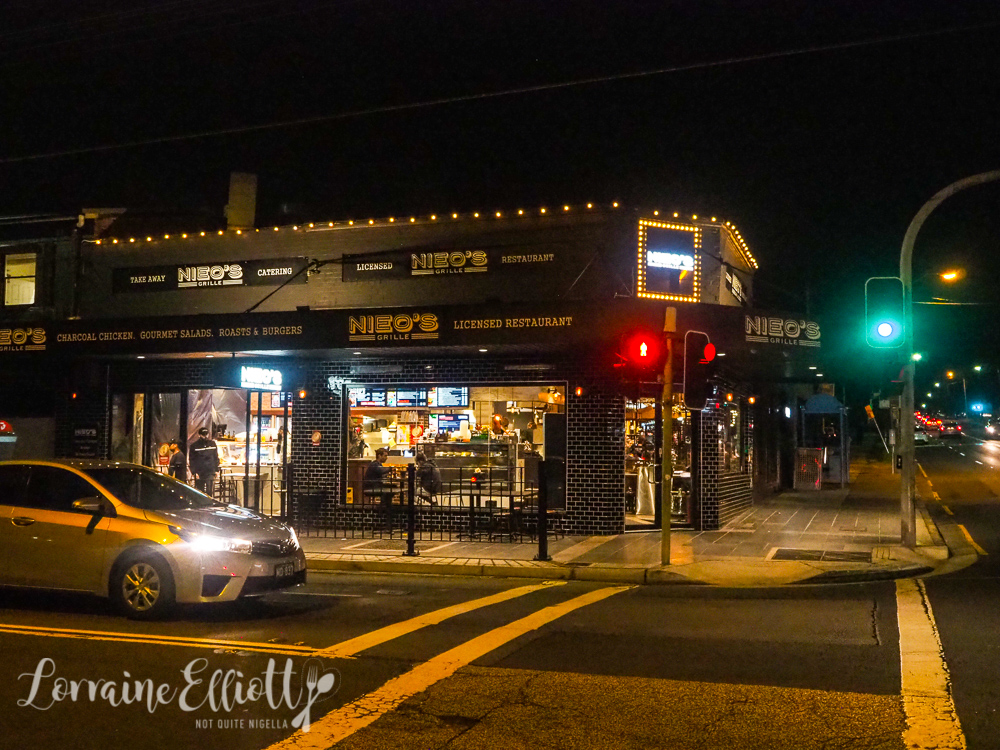 Nieos's Grille is a busy Greek restaurant on the corners of William and Bexley Road. They serve generously portioned Greek dishes from lemony crispy whole chickens to classics like rich and creamy pastitsio and moussakka. 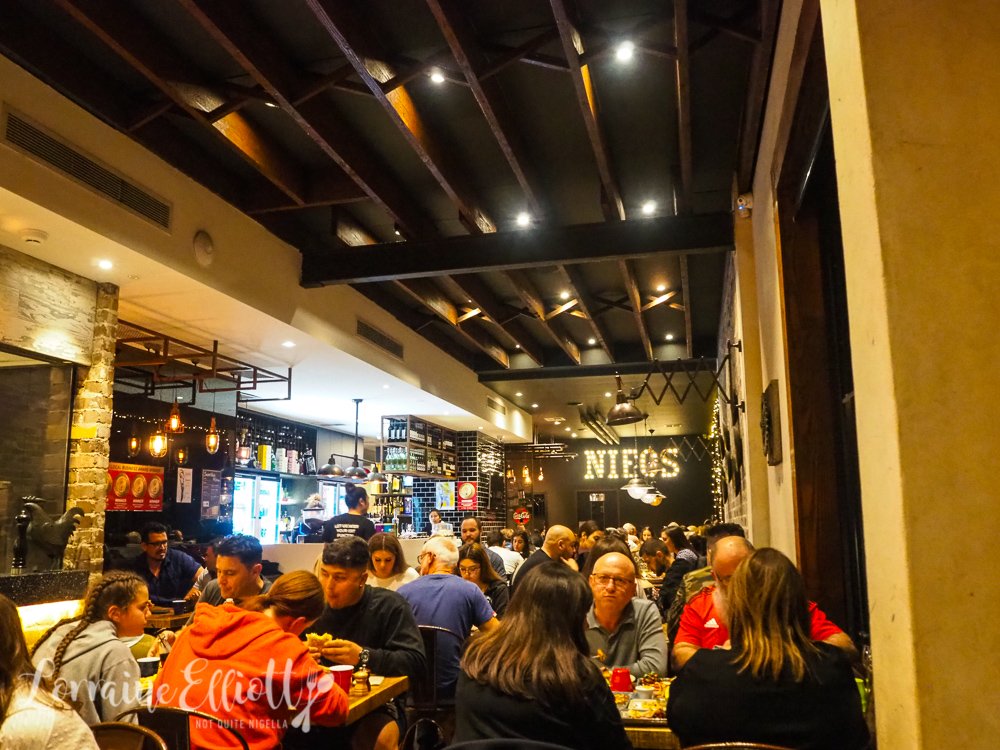 "I don't eat much but I do eat the chicken," says Valentina's husband Pete pausing for a few minutes before bringing up the chicken again. "I just want the chicken," he says emphatically perhaps in case hurricane Lorraine takes over the ordering (again) and forgets to eat the dish that he is rather smitten over at Nieos's in Canterbury. 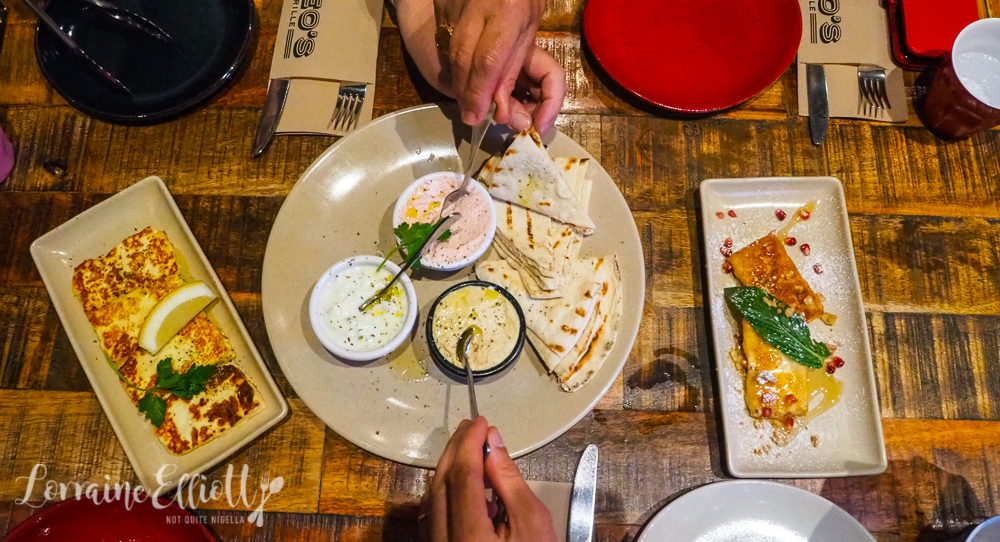 A few weeks ago I had seen Valentina eat here on her Instagram stories and asked her what it was like. We had driven past Nieo's a few times and it was always bustling so I figured who better than to ask about than Valentina who has a Cypriot Greek background and who cooks fabulous Cypriot feasts for her friends and family. We made plans to go and brainstorm our joint Halloween party there. She warned us that we have to be on time because they only hold tables for 15 minutes and when we arrive we see how packed it is. 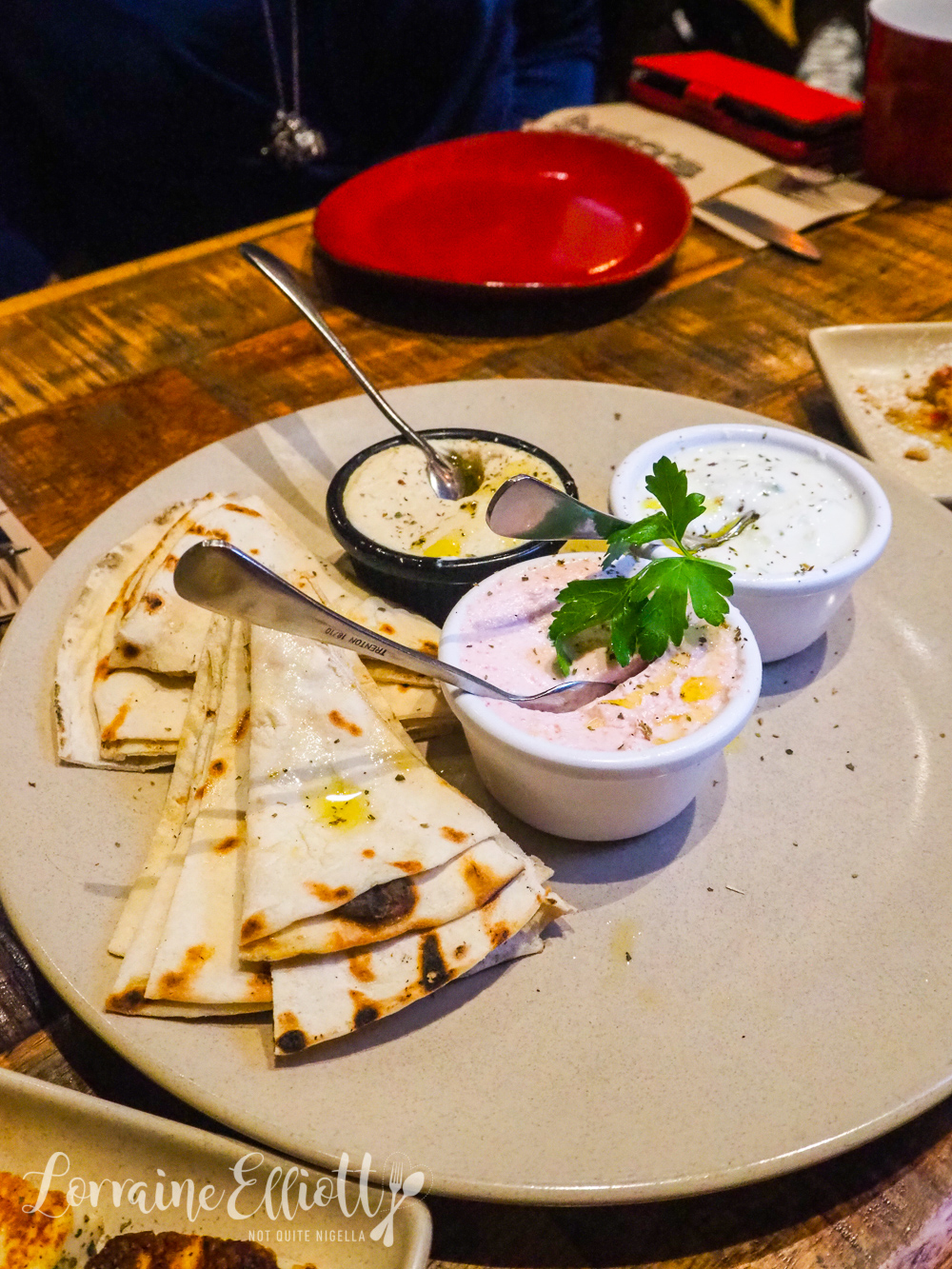 Service is friendly and efficient and they've got things down to an art. It can't be more than 5 minutes after we order that the entrees come out. The first is the mixed dip plate with taramasalata, tzatziki and hummus dip. They're all good although there's no contest: the taramasalata is my favourite. There is a generous amount of warm pita bread triangles with the dips. 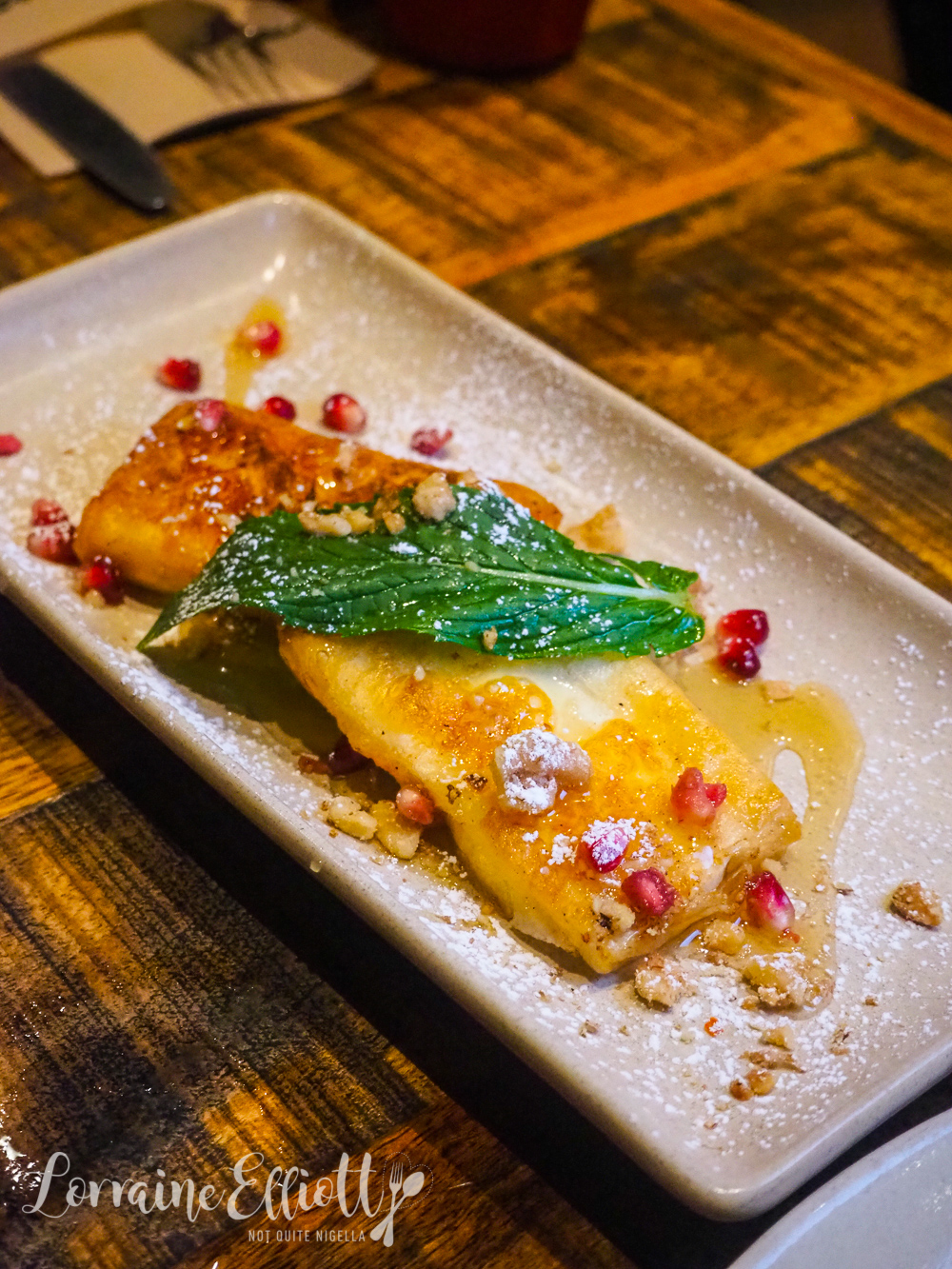 The feta tiganiti caught my and Valentina's eye so we ordered it. It is slices of creamy feta wrapped in filo pastry, shallow fried and drizzled with honey, walnut pieces, pomegranate arils and sprinkled with icing sugar. I though it might be as sweet like the Moroccan b'stilla pigeon pie that is dusted with icing sugar but here it is more subtle and this is definitely more savoury than sweet. It is tasty and the sort of thing that I would try and recreate at home. 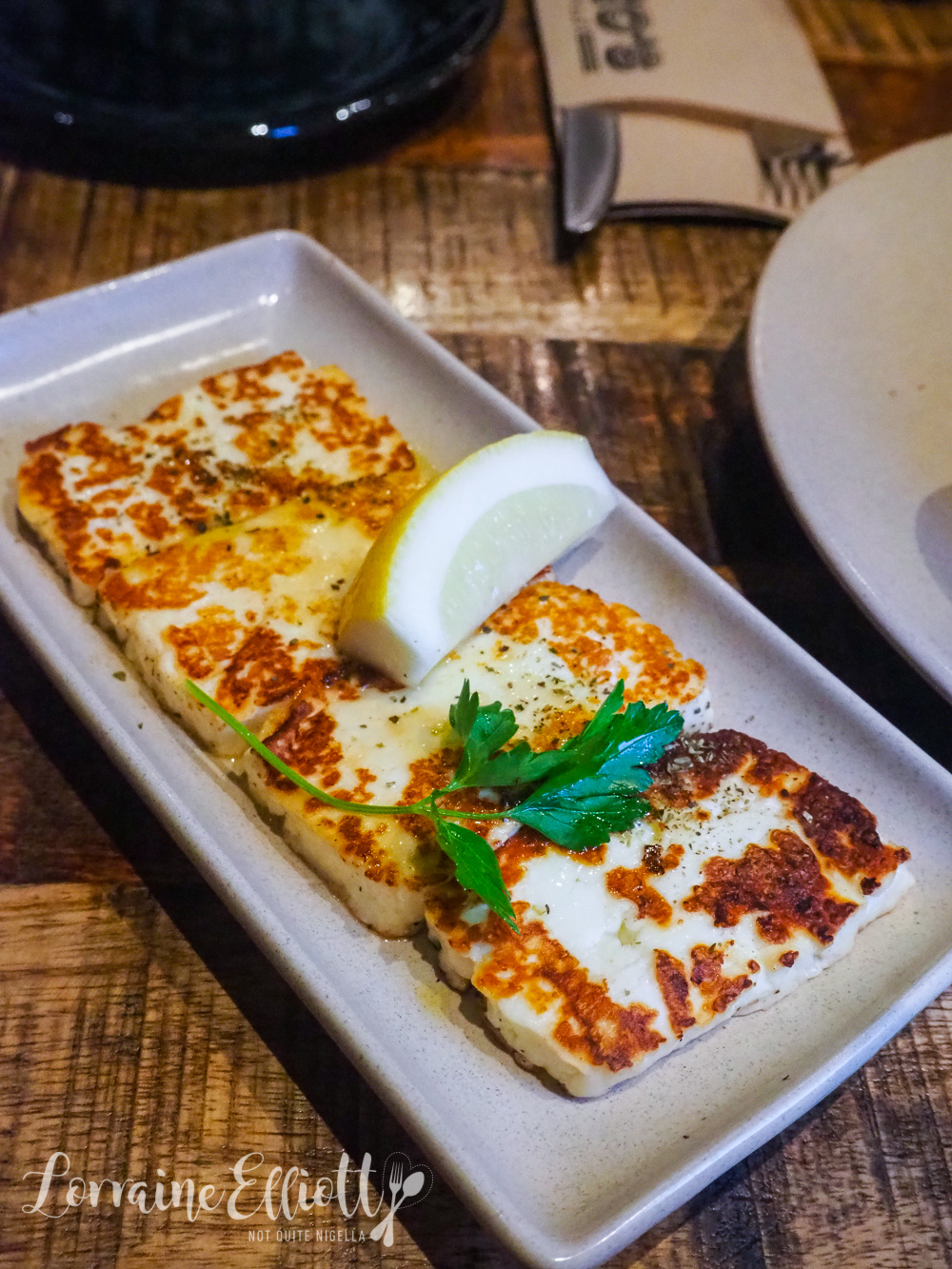 We just had to get halloumi because really what kind of life is it without this delicious Cypriot cheese? Nothing, I tell you NOTHING. 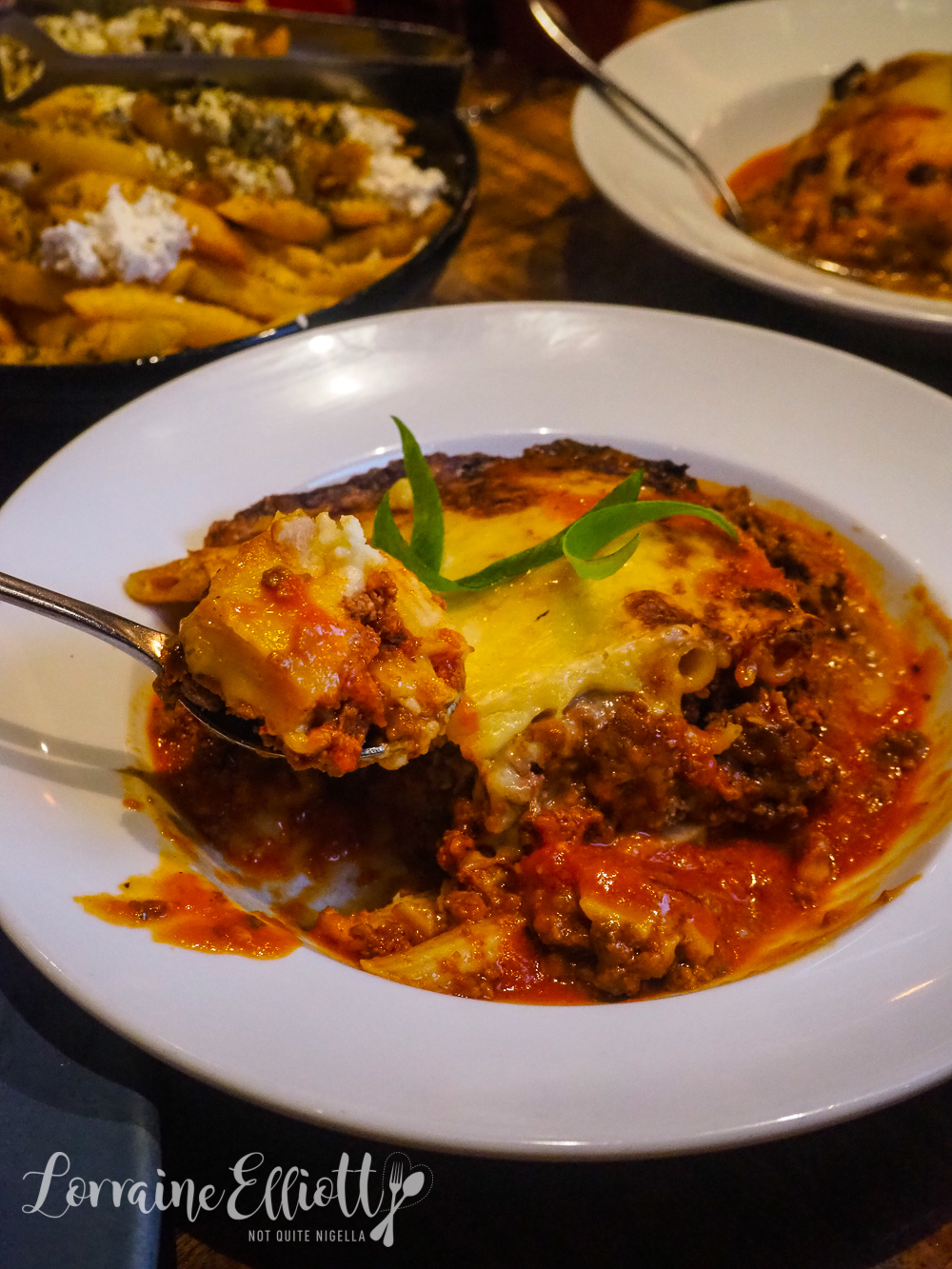 As Valentina has taught me, there is a lot of similarity between pastitsio and moussaka, mainly the beef mince, tomato based sauce and bechamel. The main difference is that pastitsio uses pasta in the dish to make it a slightly more carbolicious delight. 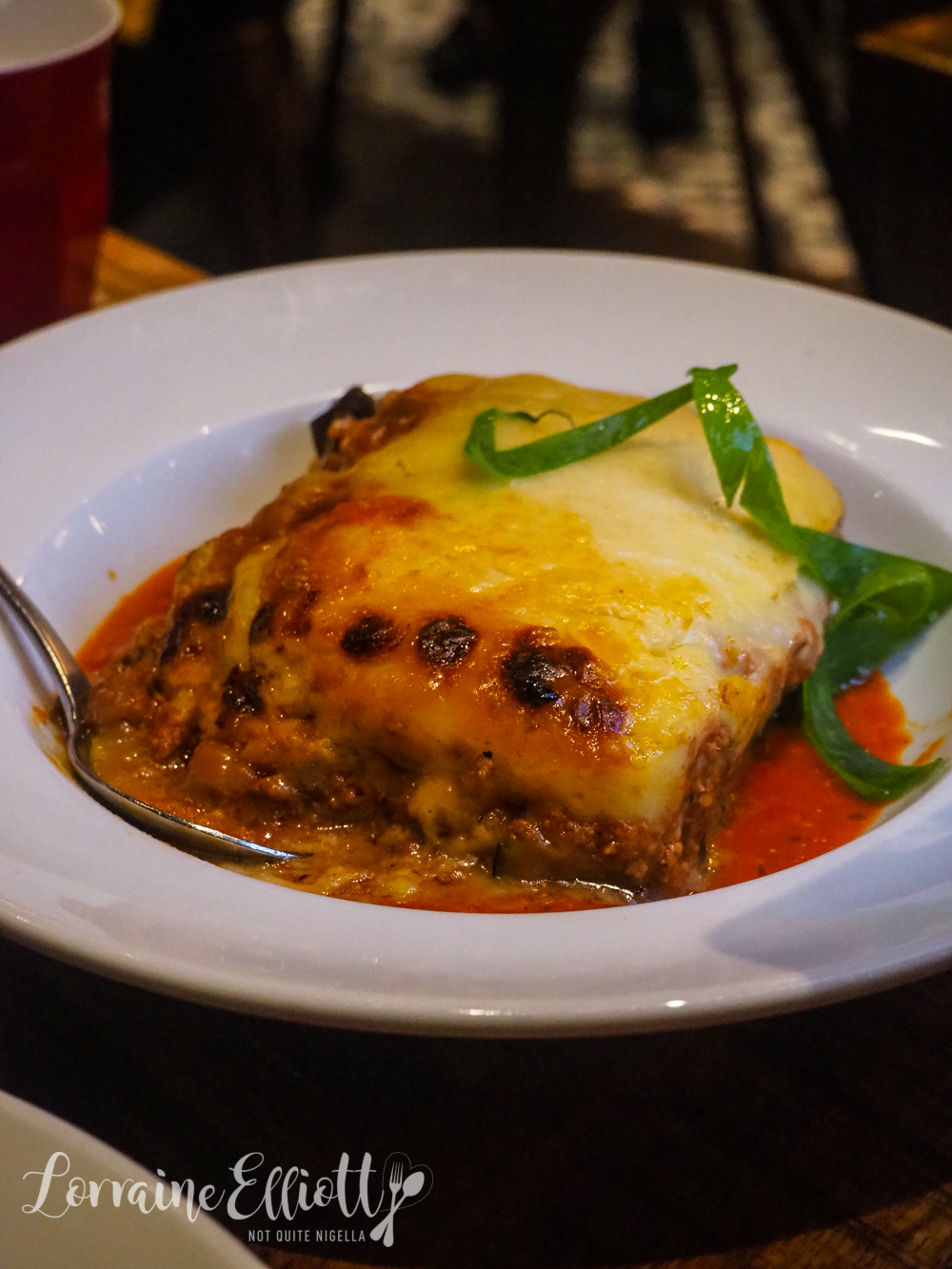 Out of the two, I slightly preferred the moussaka for the extra vegetable layers of potato and soft, melting eggplant. They are quite similar and very tasty in a comforting way. 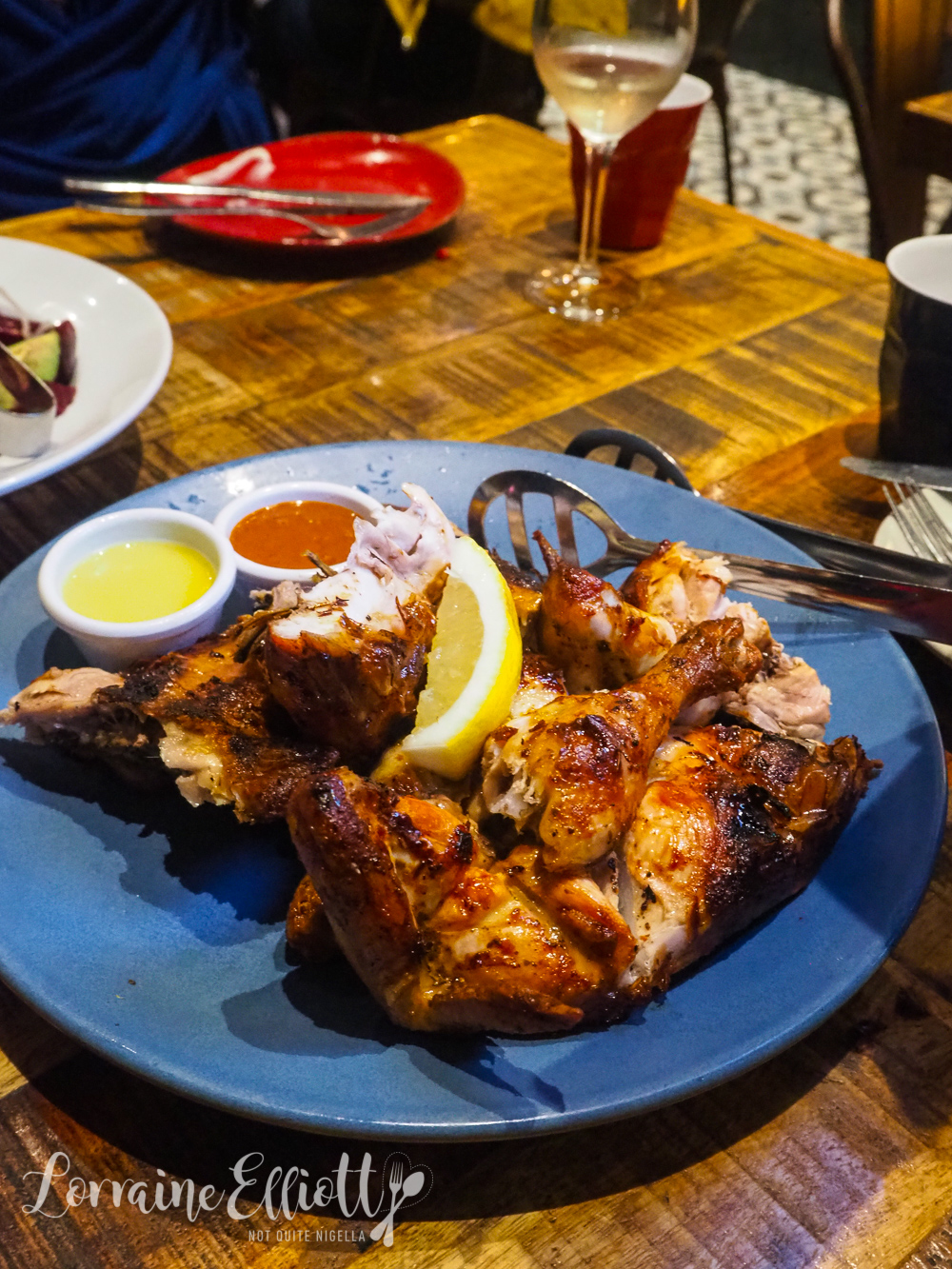 We joked about what would happen if they had run out of chicken and Pete quickly intercepts such crazy talk by pointing out the display of chickens in the distance. I don't know what would have happened if they didn't have the chicken. I try a piece and it's pretty damn fabulous. The marinade and flavour really seeps through the chicken with a lemon herb flavour and the skin is gorgeously crisp. It comes with a lemon and chilli sauce and they're both pretty fabulous with it. Ok Pete, we get it, we love the chicken too. 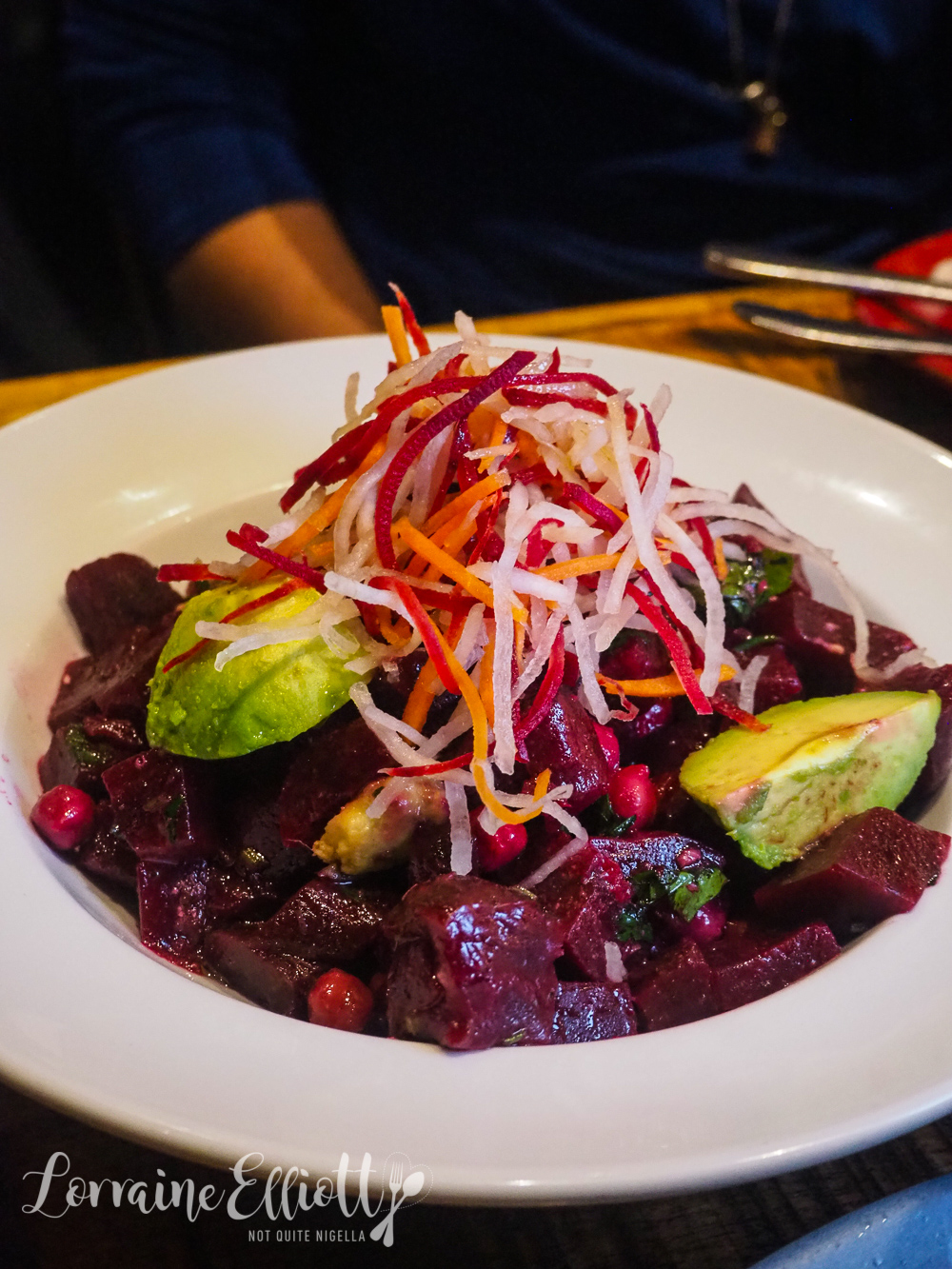 The beetroot salad is from the takeaway salad bar and it's sweet and earthy with avocado chunks, chickpeas, parsley and shredded radish, carrot and beetroot on top. 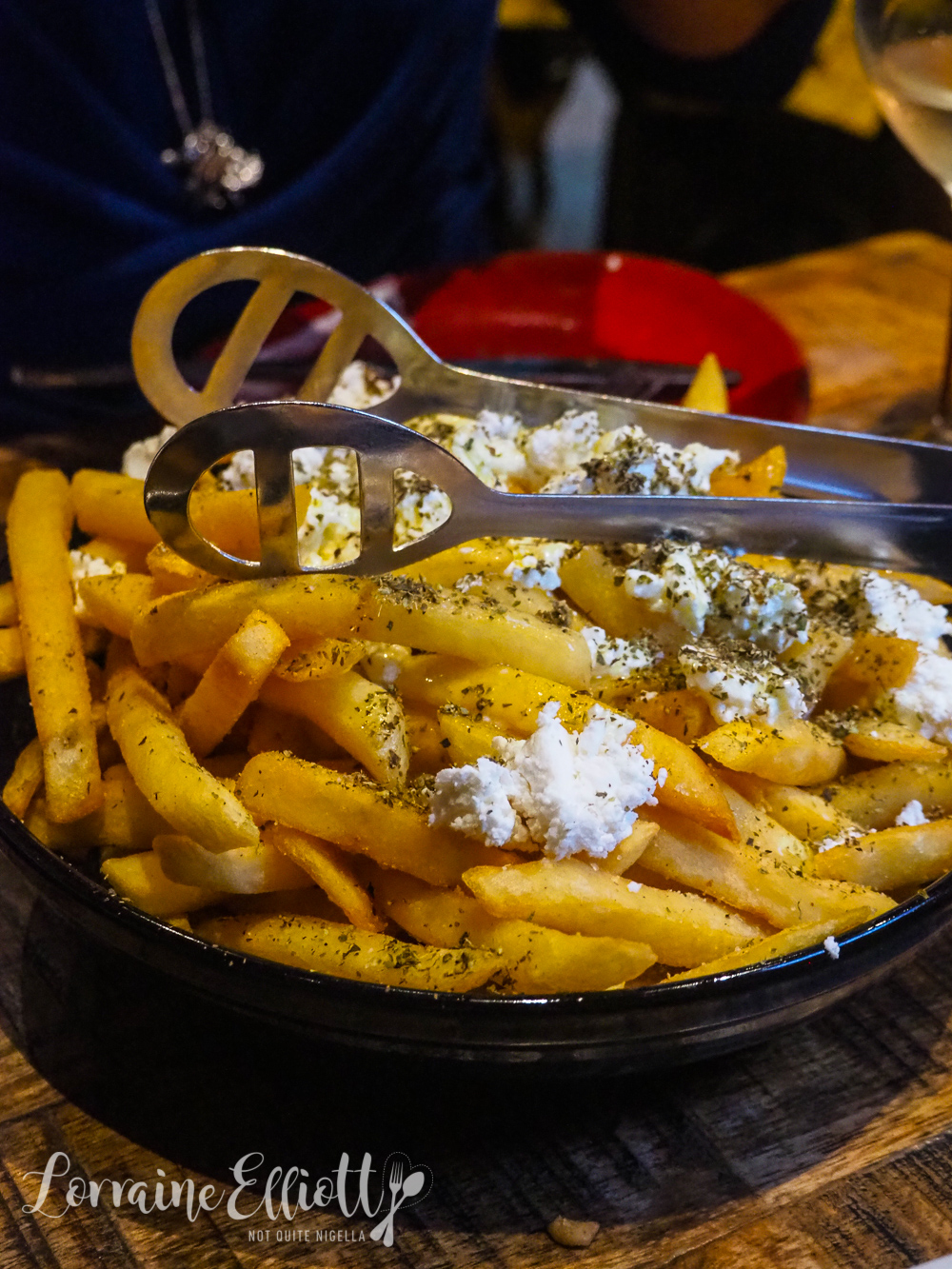 I love the idea of feta chips in theory but I've never really loved them in reality. Like when you meet your idol in real life to find that they never measure up to how you've imagined them to be. They are quite nice dipped in the chicken chilli sauce though and they do come as a massive portion but mostly this is bypassed in favour of other dishes. 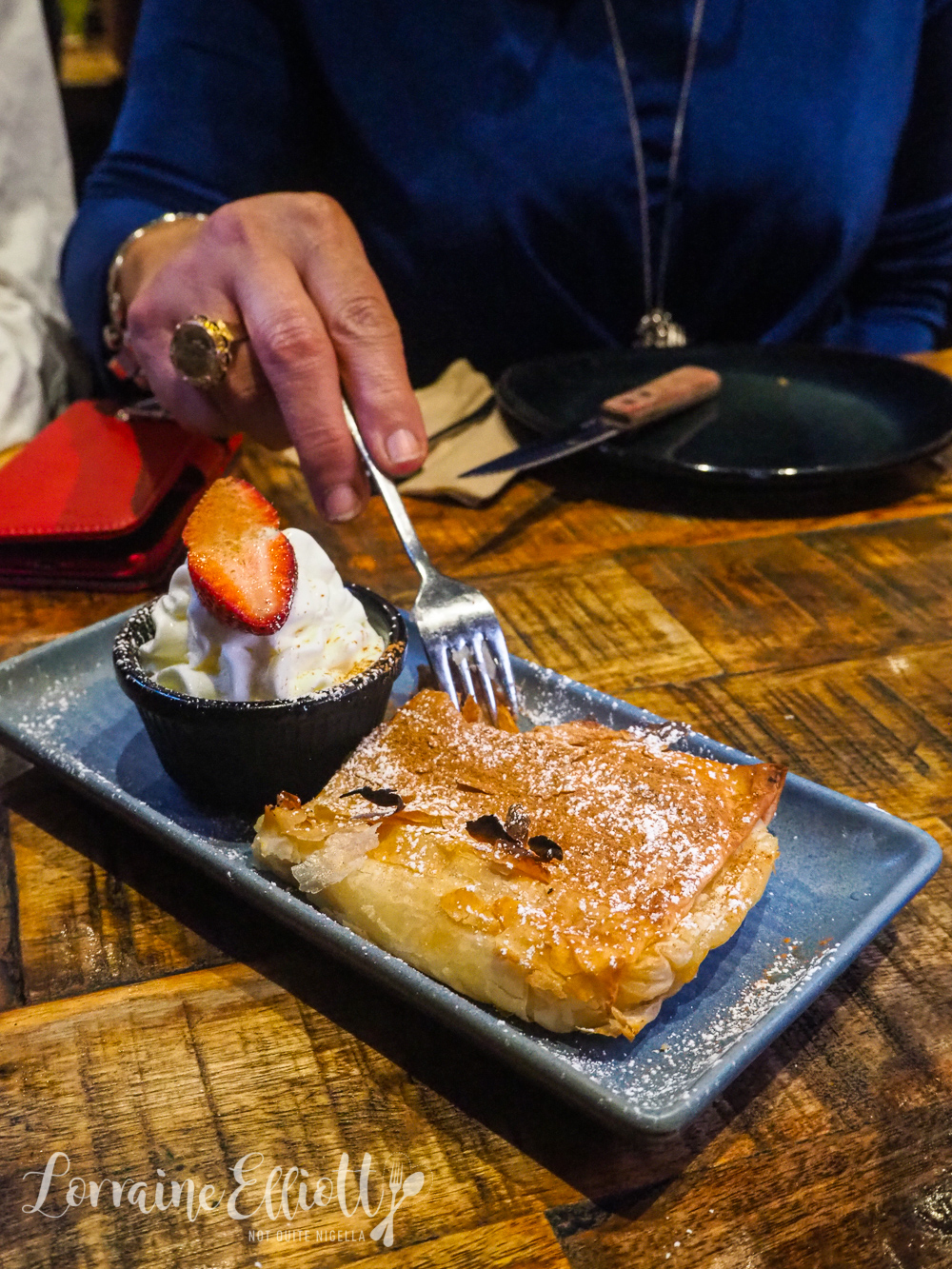 The bougatsa is nice with a creamy semolina based vanilla custard wrapped in filo and sprinkled with cinnamon sugar with a scoop of vanilla ice cream on the side. Not as amazing as the bougatsa at Stix and Pita which is sprinkled in magical fairy dust but nevertheless it's a nice version. 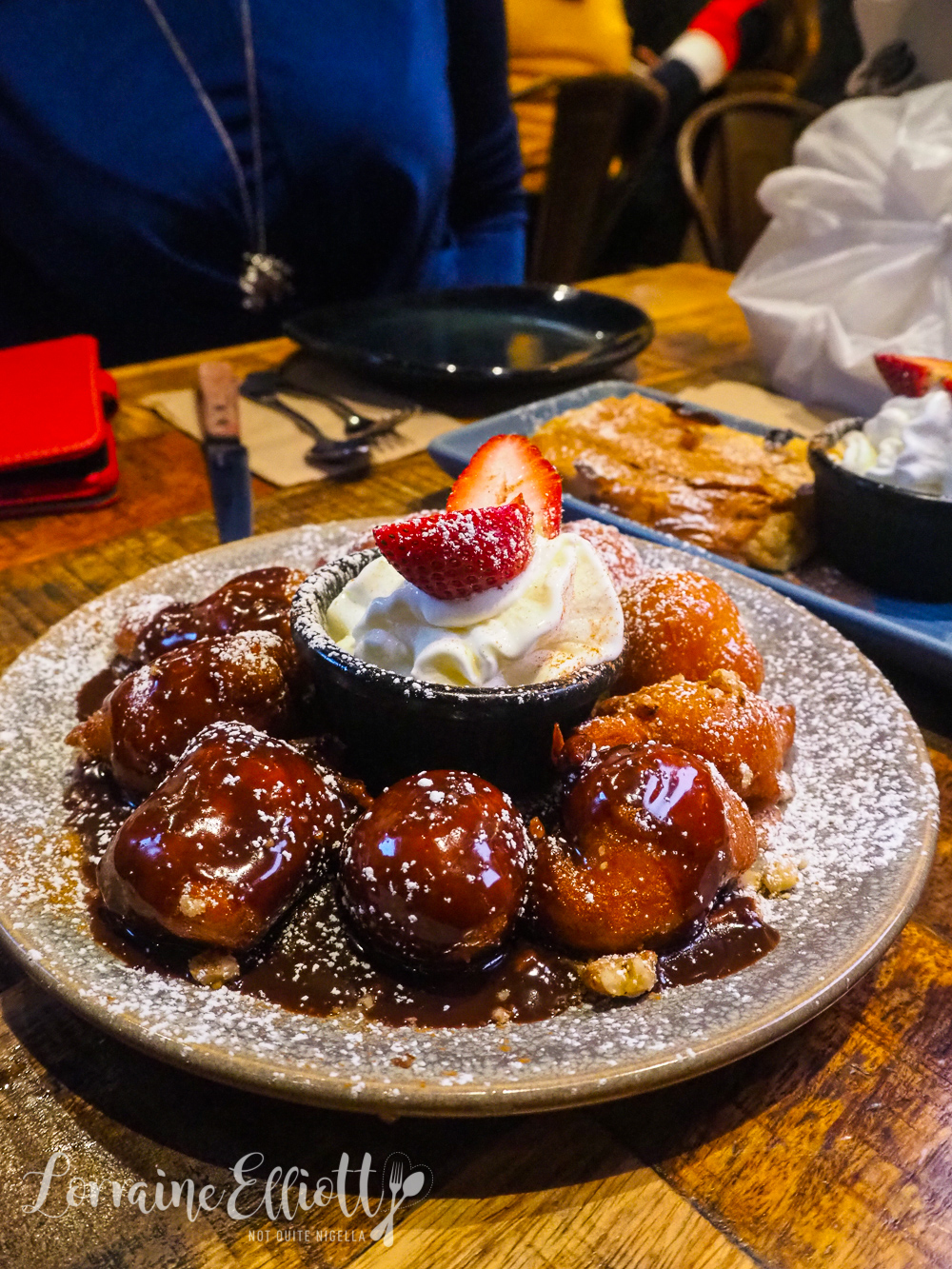 Out of the two desserts I preferred the loukoumades donuts. There is a choice of Nutella sauce or honey and cinnamon syrup and they're nice enough to let us do half and half (it always bugs me when places won't do half and half because I like to try a lot of things). I can't tell which is better-the Nutella is obviously richer but I also love the honey syrup too.

So tell me Dear Reader, would you choose the Nutella sauce or the honey cinnamon sauce (or both?)? And do you prefer pastitsio with pasta or moussakka with eggplant?