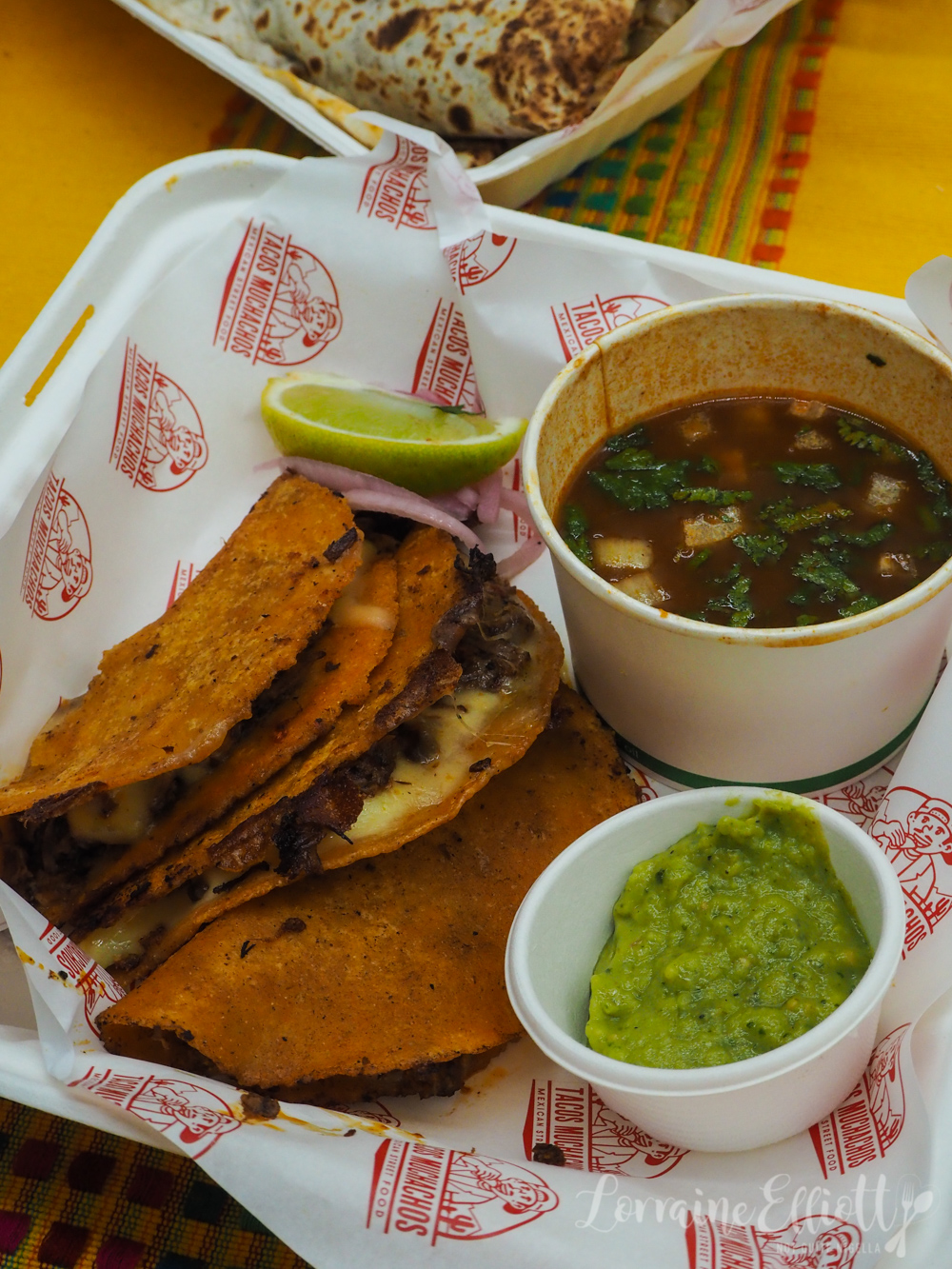 Real Mexican food that tastes just like Mexico? That's the proposition at the new pop up takeaway Tacos Muchachos in Surry Hills. There are the internet's favourite darling: birria tacos that are crisp shelled tacos made with cheese and beef that comes with a consommé to dip it in. There's also some amazingly addictive nachos and meat stuffed burritos. Wash it down with a hibiscus aguafresca spiked with mezcal. And best of all they do takeaway and home delivery.

Muchachos means young man in Spanish and the guy behind Tacos Muchachos is Daniel Hanssen. Australian born with a Armenian and Dutch background he is perhaps not the most likely contender to open up a taqueria. Daniel says, "As a family we moved around a fair bit for my dad’s work. My obsession started when my family and I moved to the U.S. when I was 6 years old. It was here that I was introduced to the cuisine via Tex-Mex. I remember loving everything about the food experience, watching the tortillas being made, the incredible flavours, varying textures and intoxicating smells." After eventually coming back to Australia to study business at Sydney University, he decided to finish his degree in Tucson, Arizona close to the Mexican border. 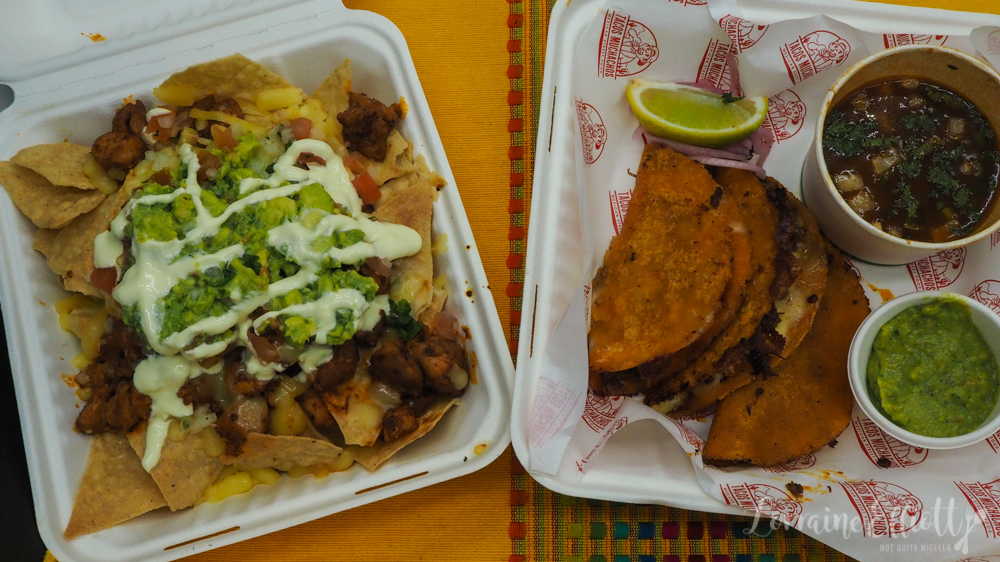 "It was here that I experienced the truly authentic flavours of Mexican street food and fell in love with the cuisine all over again. It was discovering the incredibly fresh ingredients, bold flavours and the vibrant energy of Taquerias that drew me in once again. After returning to Sydney, I noticed a lack of authentic Mexican food. I love Tex-Mex, it's what initially drew me in, however, I think we’re missing out on a lot of traditional Mexican dishes," says Daniel.

In 2020 he juggled his corporate gig while refining the concept and recipes for his dream Taqueria and worked part time in a kitchen at nights and on weekends to develop his commercial cooking experience. He reached out and joined forums and Facebook groups and began reaching out to chefs, cooks and kitchen-hands. He found a sous chef named Tonatiuh (Tona for short). 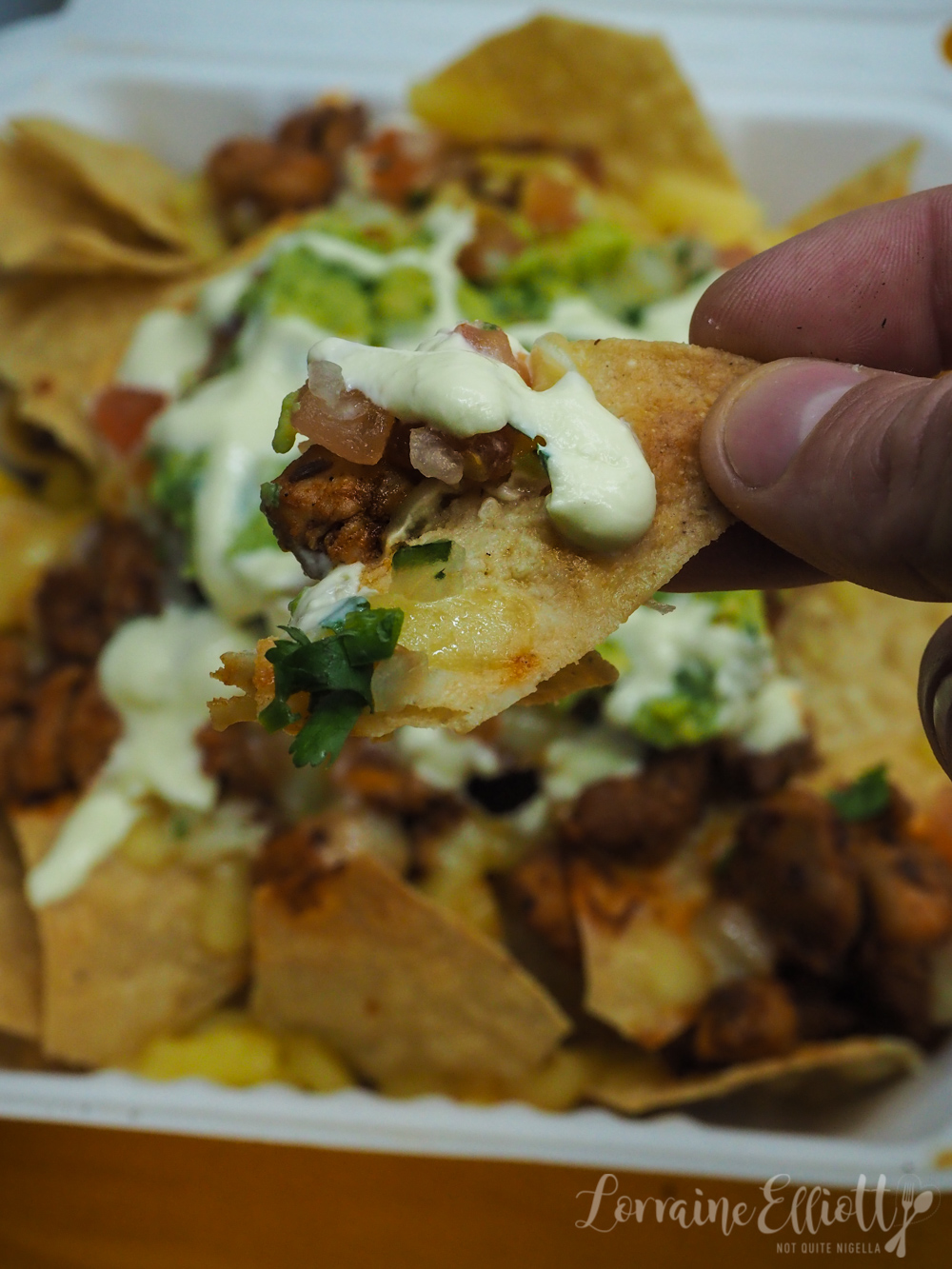 "Tona was a chef who not only shared my passion and vision but also had a number of his own incredible ideas, as well as the ability to execute them to the highest standard." The corn tortillas are hand made every day and they use traditional techniques to replicate flavours from Mexico. "Tona has been trained in fine dining and has worked in everything from Michelin star restaurants in Spain to food stalls in Mexico so he brings with him an incredible amount of knowledge and expertise when it comes to getting the most out of his ingredients," says Daniel. They rent out the space at night at Paddock when the café is closed. The team is made up of Daniel, Tonatiuh (head Taquero), Jazmin (a food technician, Tona’s wife and tortilla and salsa maker) and Diego (one of Daniel's best friends and in charge of guacamole).

I was first put onto Tacos Mucachos by Alejandra from El Chiva who said, "I can truly say it tastes like Mexico" she said. Tacos Muchachos taqueria will pop up from Thursday to Saturday nights at the cafe in Surry Hills during July. The tacos have a choice of beef, chicken or cauliflower and there are tacos, nachos, quesadillas and sides. 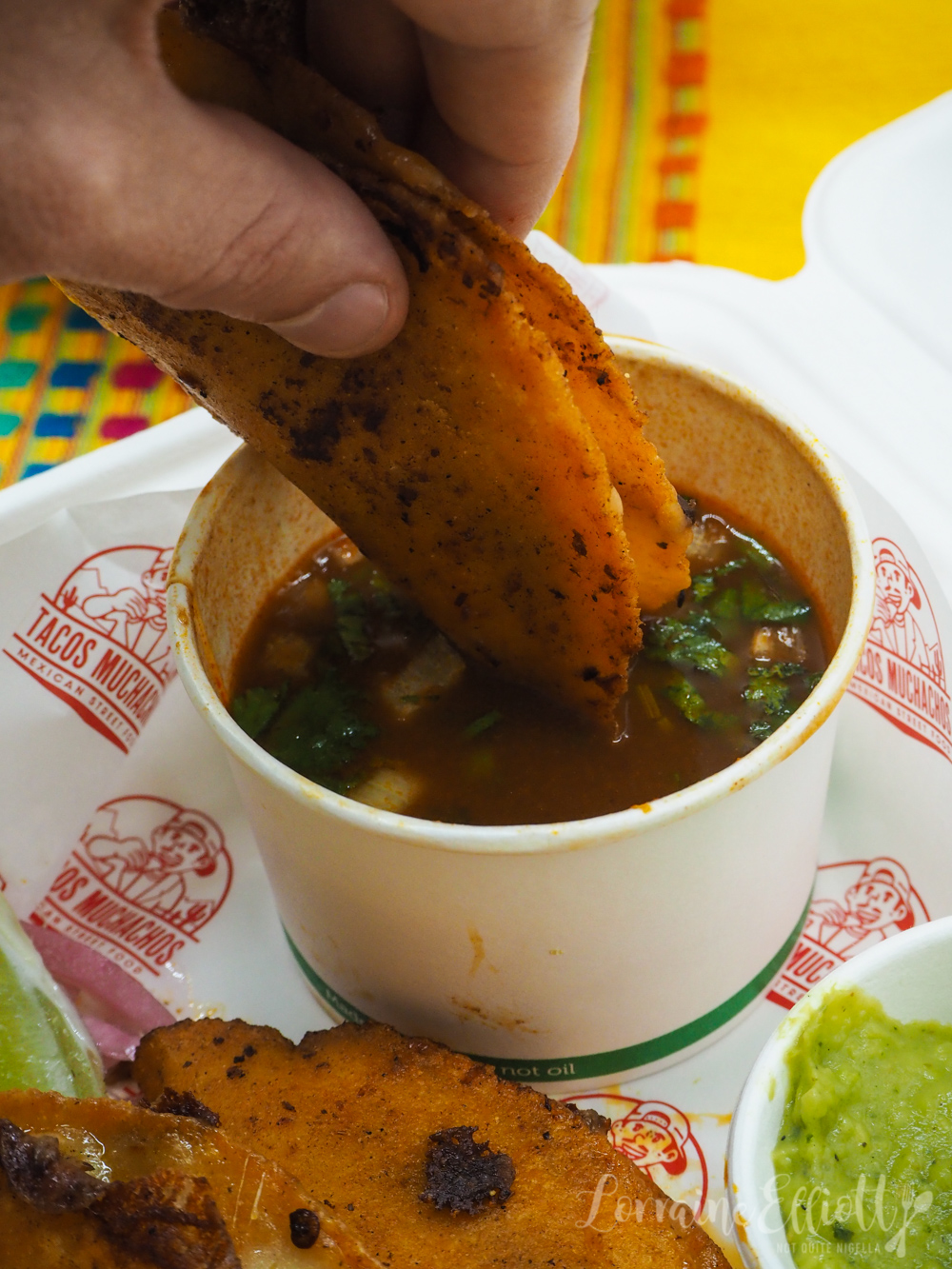 You can pre order your tacos by texting a number so that you don't have to wait for them. I decide to order each of their special items. For $7 extra you can make any tacos a a combo meal with chips, guac and a drink (unfortunately they forgot our chips and guac so make sure to check your bag before you leave). They're also on Ubereats but just started that day. The bag of food smells incredible and I'm glad I live just a few minutes away as the aroma drives me crazy. 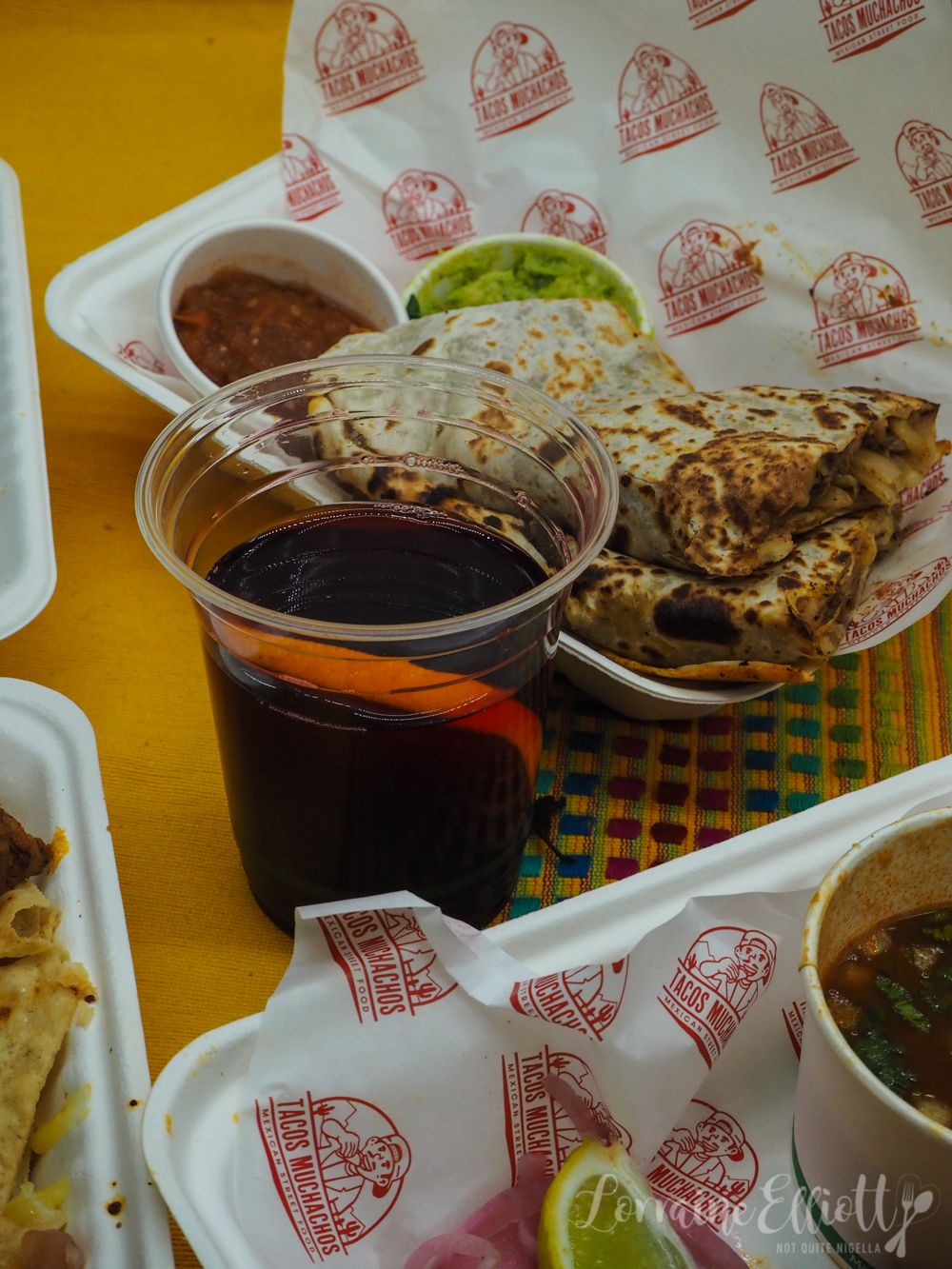 There are Jarritos soft drinks available as well as a hibiscus aguafresca which we upgrade to a spiked version that they spike with mezcal. Mr NQN loves this although I'm not a huge fan of Mezcal so I like it without. 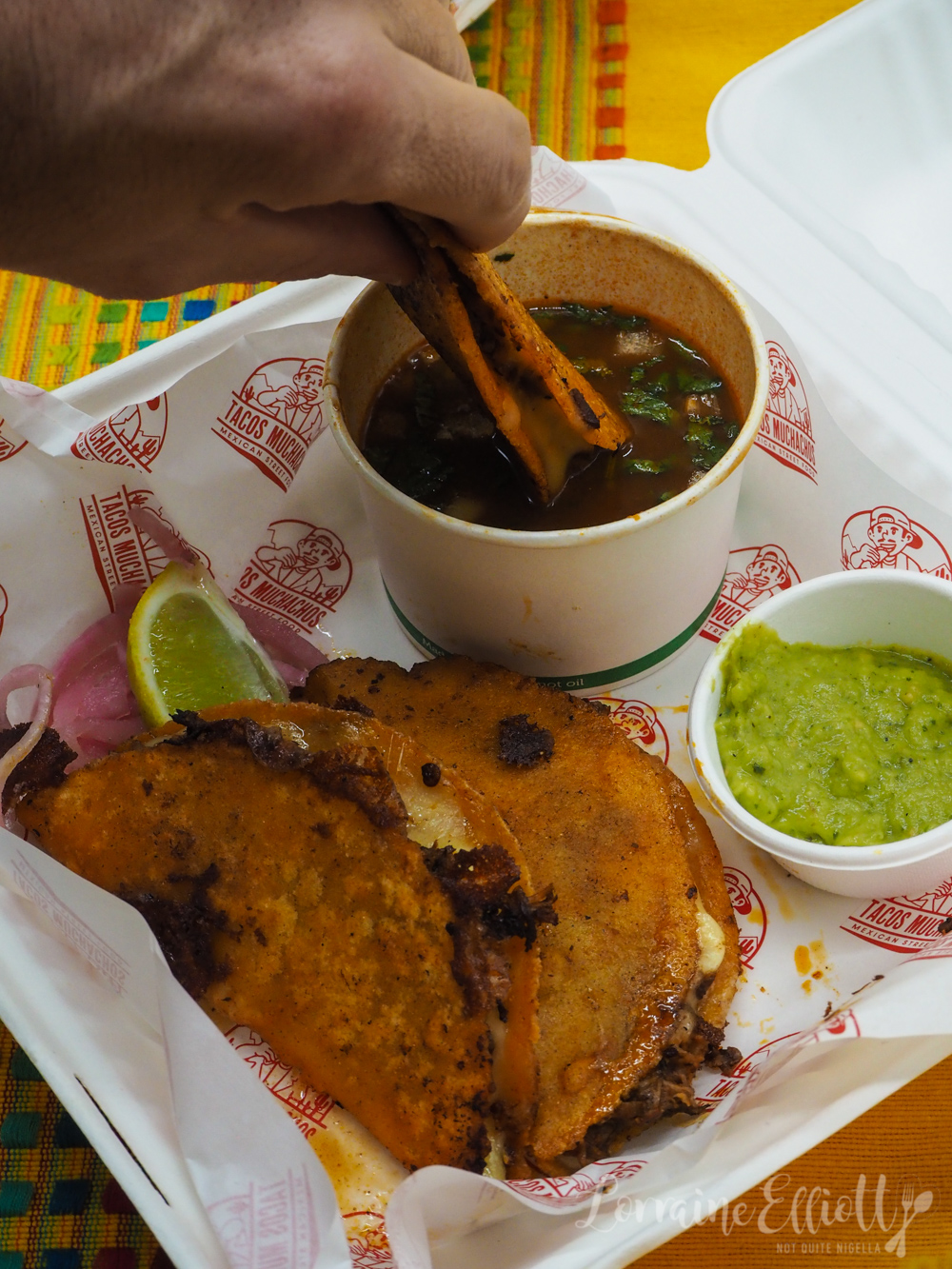 The star of the show is their quesabirria taco. "The quesabirria taco, originally from Tijuana in the North of Mexico, is the perfect combination of salt, fat, acid and texture and is sure to comfort you on a cold winter’s day," says Daniel. The filling is a 24 hour marinated 4 hour slow cooked beef that they use to fill their house-made corn tortillas with a cheese blend before then crisping them up in beef fat and serving them alongside pickled onions, a wedge of lime and consommé. We love the taco shell that is crisp on the outside and gooey and meaty inside and enjoy dipping them in the beef consommé. Mr NQN is eyeing off the tacos so hungrily although I've only taken two bites of one. I pass him the box of tacos and consommé. He devours all of them without leaving me any. "OH MY GOD did you just finish all of those?" I say, outraged. He looks chagrined. Yup he sure did.

"I'm just going to drink my drink for a while," he says sheepishly. 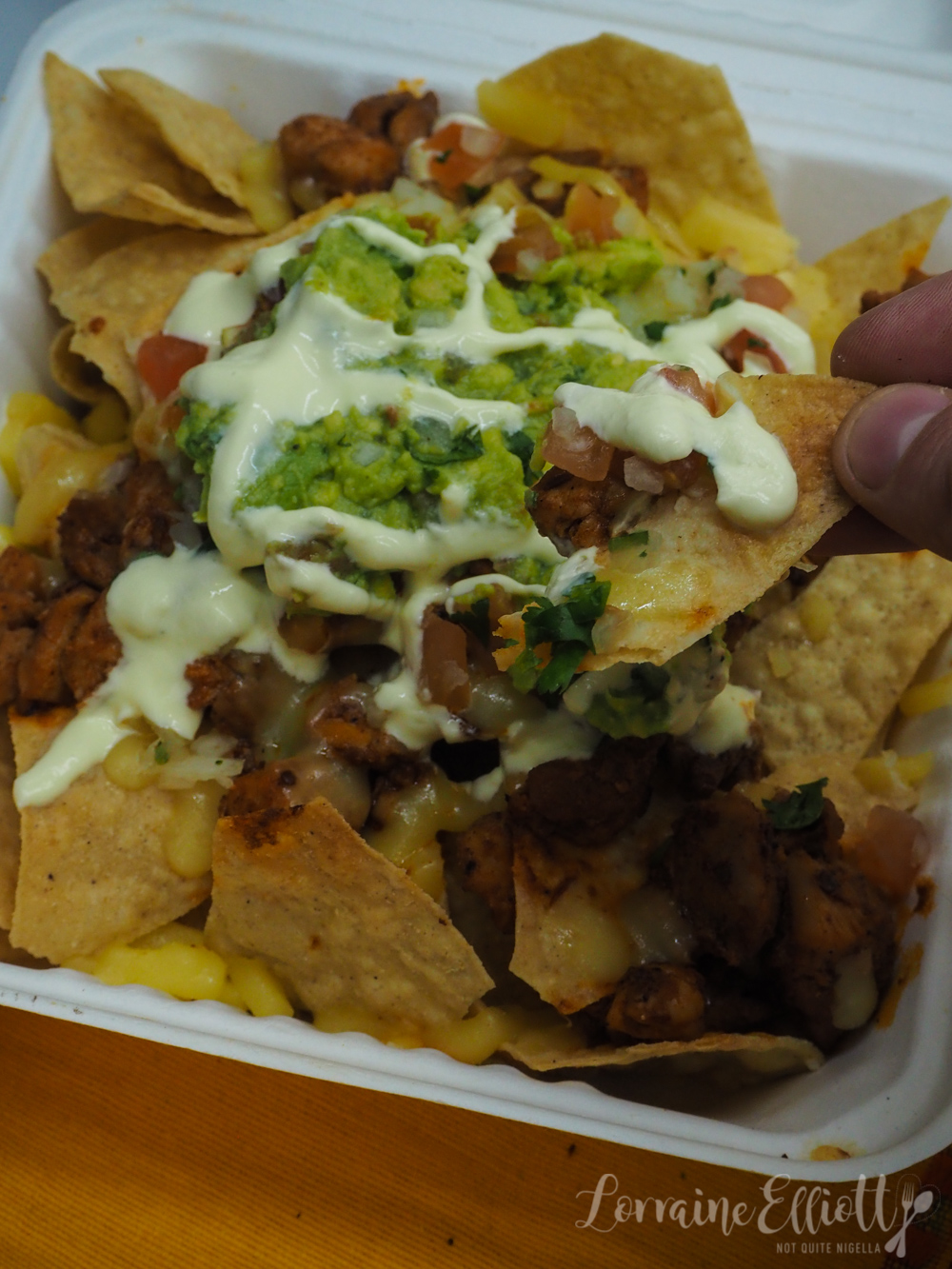 That leaves me time to sample everything else without feeling like a hawk is watching me. You can add any meat to the nachos and I went with their recommendation of chicken. It's generously topped with juicy, flavoursome chicken spiced made with a smokey chipotle adobo marinade and thin white corn tortilla chips, smashed guacamole, pico de gallo and lime crema.

There are actually two types of guacamole served at Tacos Muchachos: taqueria guac and smashed guac. "Most guac we get here is simply smashed guac but we have a second type of guac that is the more common type in Mexico called Taqueria guac. It is more common on tacos as it is less chunky and has other ingredients like tomatillos in it so its perfect for putting onto tacos. It makes a huge difference and livens up the taco a bit," says Daniel. 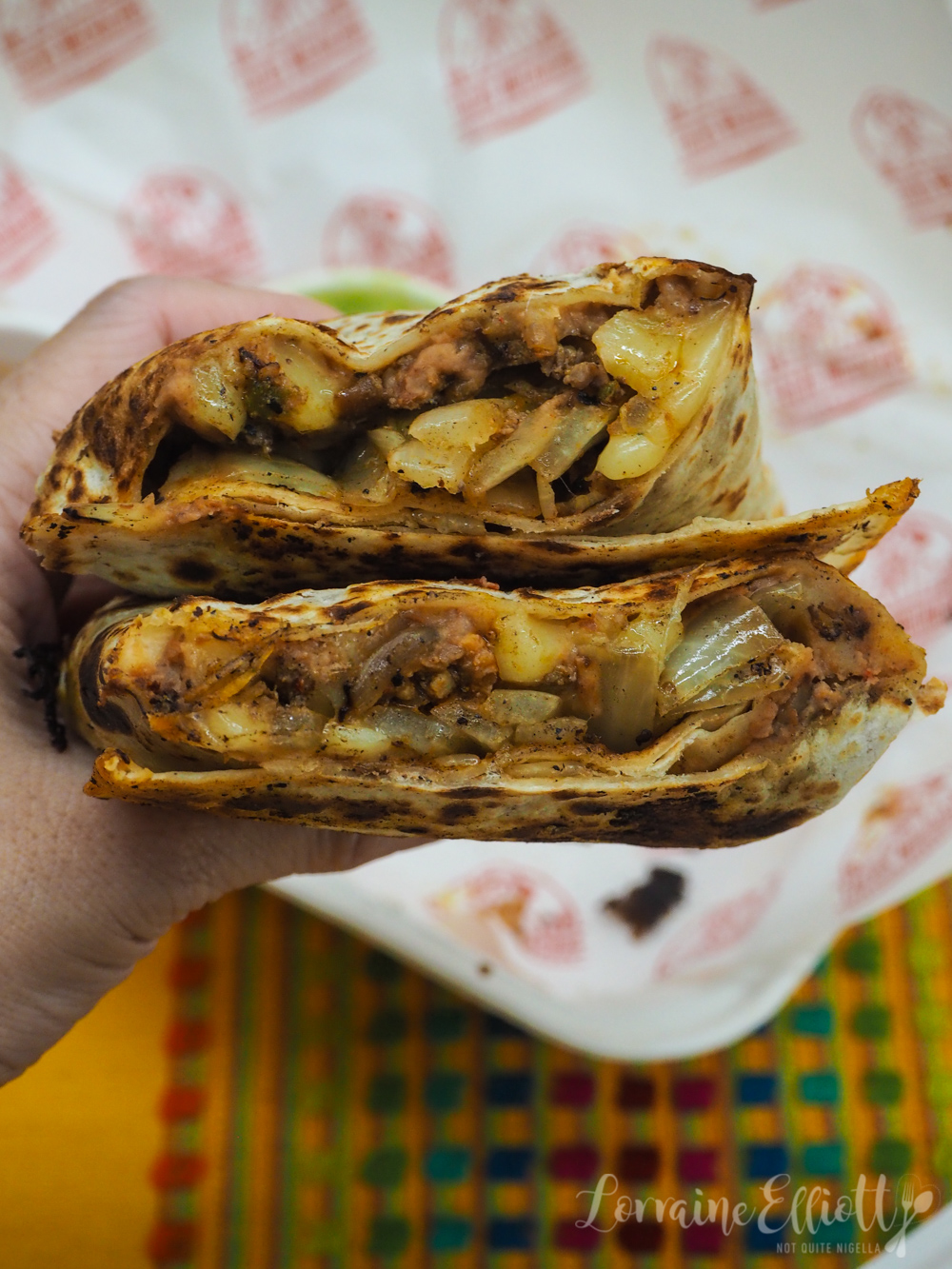 "Our burrito is inspired by the traditional street burrito that Tona used to eat as a child with his family in Mexico," says Daniel. We went with their recommendation of Tona's special campechano or "mixed" filling, a mix of carna asada beef and al pastor sweet adobo marinated pork. This is absolutely packed with melt in the mouth meat that is chopped. It is served with chilli sauce and guacamole on the side. This is substantial and ideal for sharing although if you asked Mr NQN he would eat the whole thing himself. 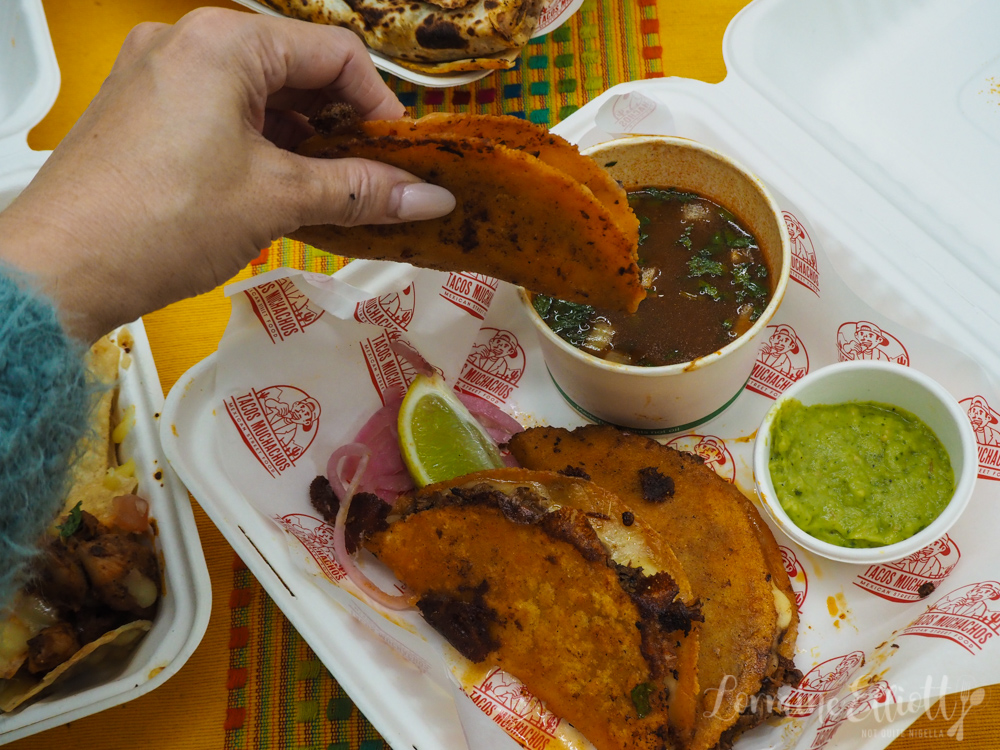 After this they may pull back their hours to search for a more permanent space. "We’re actually in the process of securing our own permanent location that we can call home to truly bring the Mexican Taqueria to life. I’ve always been inspired by the energy and vibrancy of Mexican Taquerias so rest assured, our shop will reflect this energy and passion. Who wouldn’t want a little Mexican getaway right now?".

So tell me Dear Reader, have you tried a quesabirria taco? If you were to open up a restaurant, which cuisine would it be?

Thursday to Saturday July 2021 from 6pm