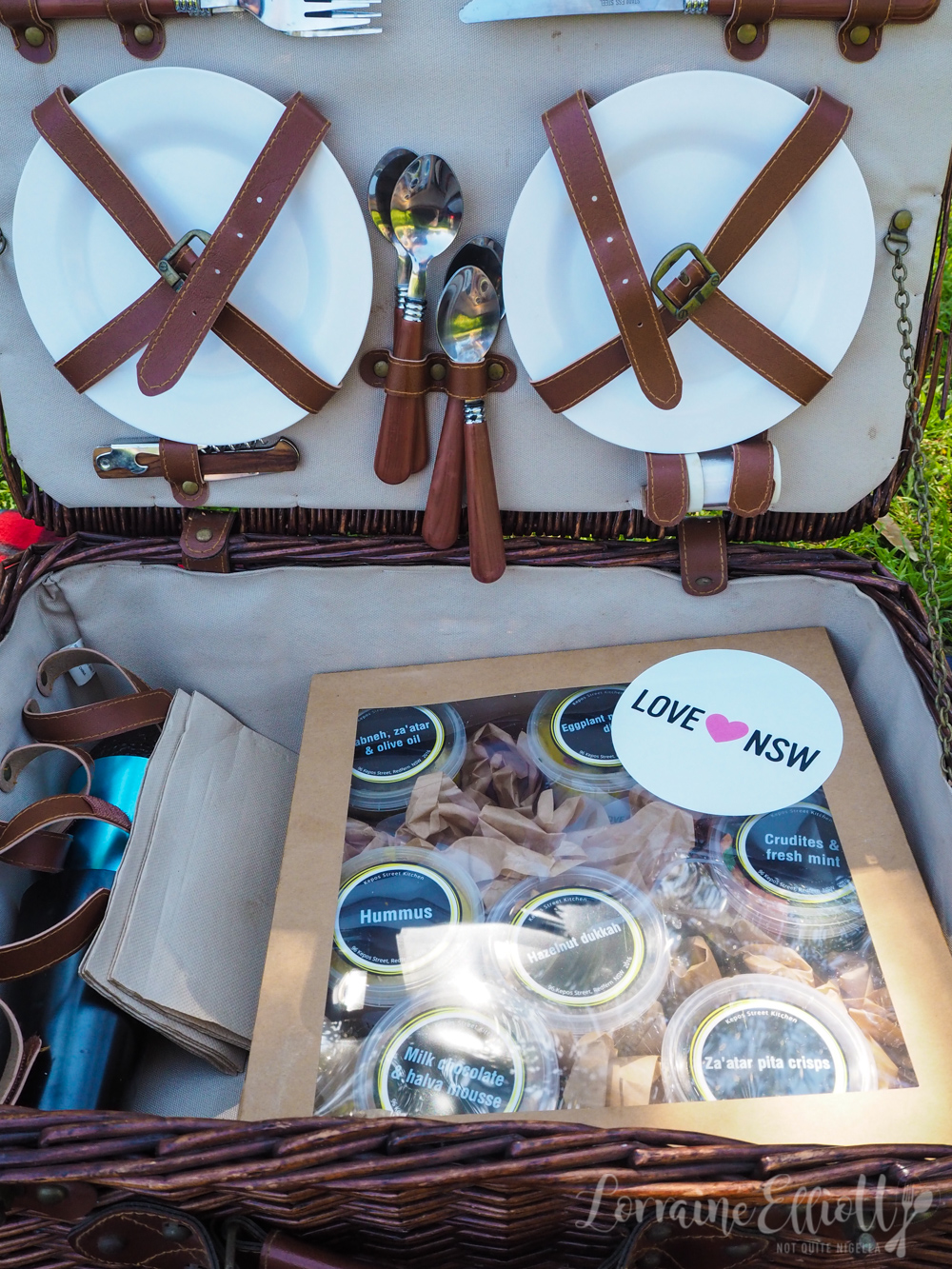 Looking for a fast and tasty picnic solution? Kepos Street Kitchen's deli fridge has everything that you would need to a picnic spread. There's a range of Middle Eastern dips from eggplant moutabal, smooth hummus and herb labne to ready made salads and felafel plus the most divine chocolate and halva mousse. Takeaway or home delivered!

Normally I drive past Kepos Street Kitchen and there's a huge queue of people waiting to get a table at the popular Middle Eastern cafe. This lockdown things are slightly different. They now flock to the deli fridge to buy items to cook at home or already prepared food. 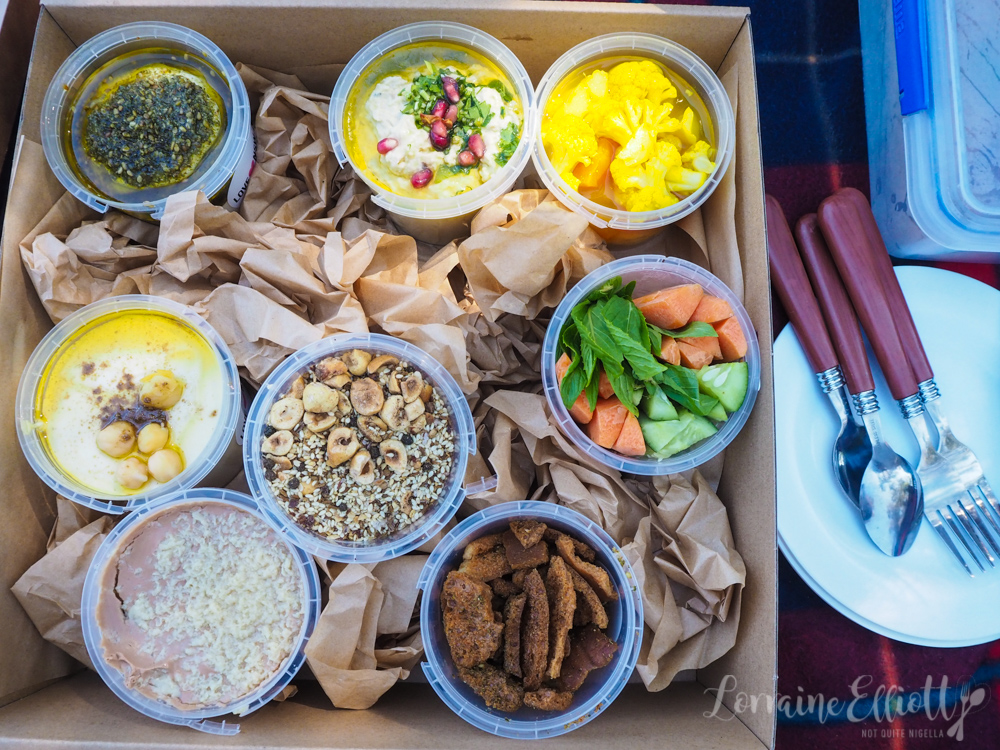 The couple behind Kepos Street Kitchen are chef Michael Rantissi and Kristy Frawley. The 2021 lockdown has been different from the 2020 one for them. Michael says, "I think the 5kms by itself a totally different ballgame. The Delta strain is so much more contagious affecting more people going out." Most of the Kepos Street Kitchen's clientele is from the Eastern Suburbs and North Shore and they were not able to access the offerings at the inner city cafe so they started delivery for up to 15kms from Redfern to the Eastern Suburbs, Inner West and North Shore for $20-$25. For anyone outside of that area, OzHarvest through Harvest Bites sells one type of Kepos Street Kitchen meal delivering up to 30kms from the city.

"We started the deli fridge in the last lockdown. It's been mind blowing we didn't expect a deli missing in the market. How would you know these things? As a chef you always want to put things on a plate not a container," says Michael. The deli fridge started by accident. "People asked do you mind if I have a container of hummus or harissa to take home? I've got a lot of stock in my fridge, beautiful produce and pickling stuff. I asked friend to loan me a standing fridge, packed it with stuff and in the first week everything was gone," says Michael. 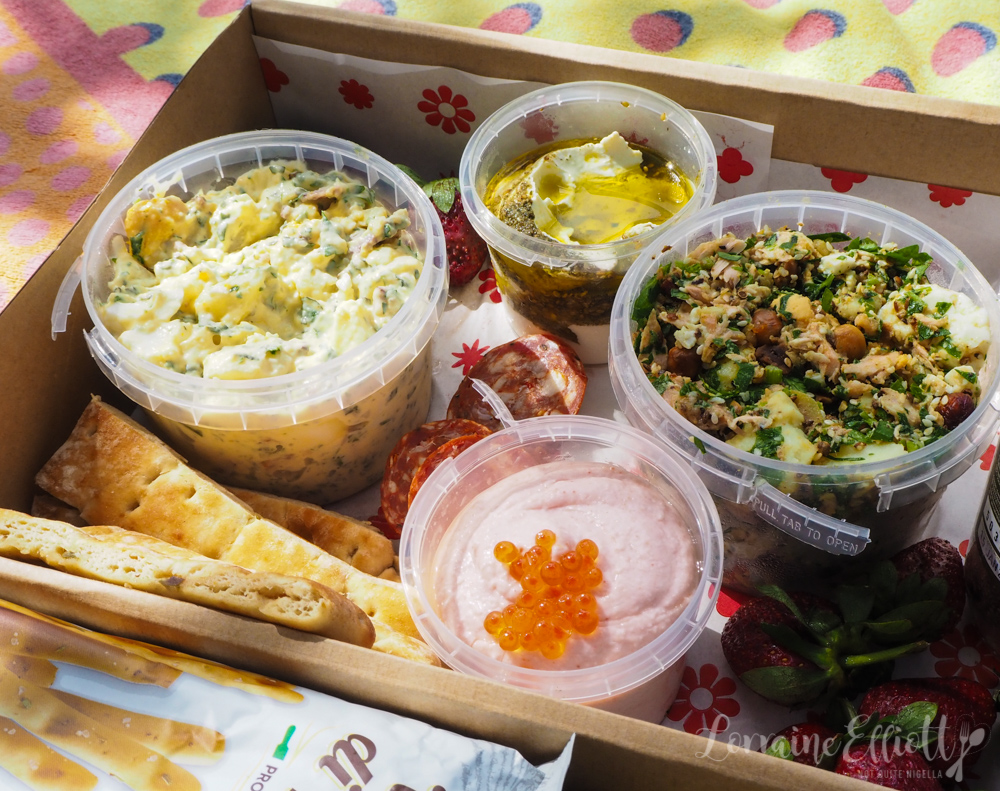 Apart from salads and deli goods they also sell ready to cook items. This was prompted when his poultry supplier had an excess of unsold chickens that he didn't want to sell to the supermarkets as he would lose too much money. Michael butterflied and marinated the chickens in chermoula and lemon & za'atar ready for people to roast at home. His fridge also has meatballs, vegetarian and beef moussaka, shakshuka and a range of filled pitas. 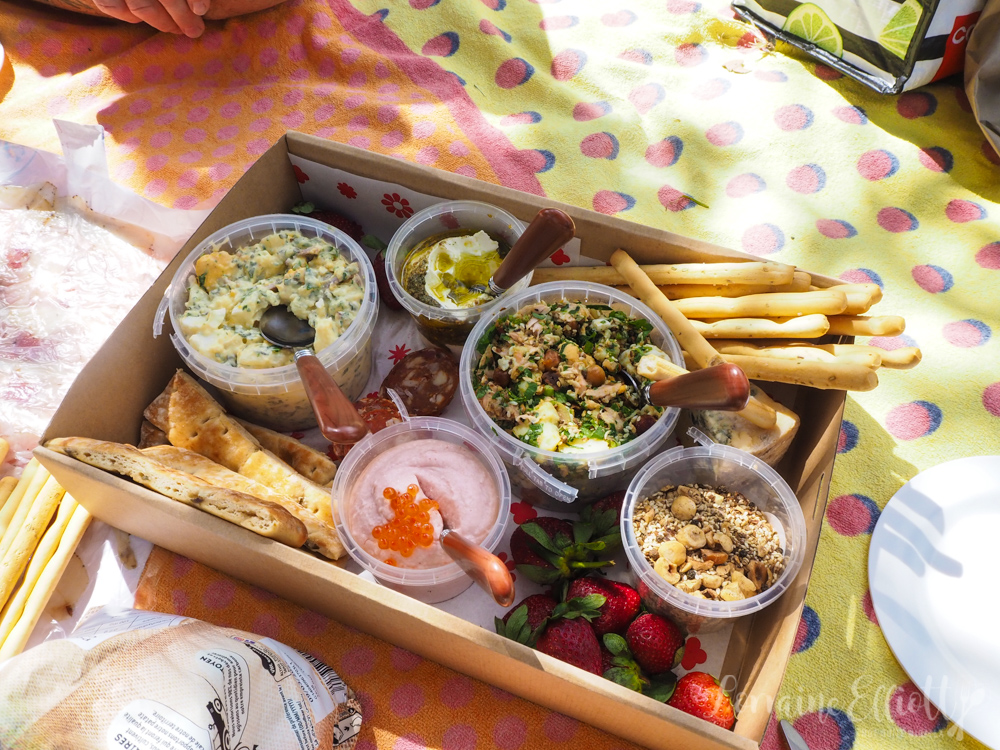 "We looked at who is a small, artisan producer who is going to vanish if they are not going to be supported. We only use Australian produce and everything that is NSW and everyone that is a small producer. You want to feel like you are supporting a bigger picture than supporting for the sake of supporting," says Michael. They also have pops up every week where have a display of a different producer. This allows the brand to have exposure and brings the produce to customers that would normally not be able to access the product due to distance restrictions. These range from Crumpets by Merna to Pepe Saya to Brooklyn Boy Bagels. 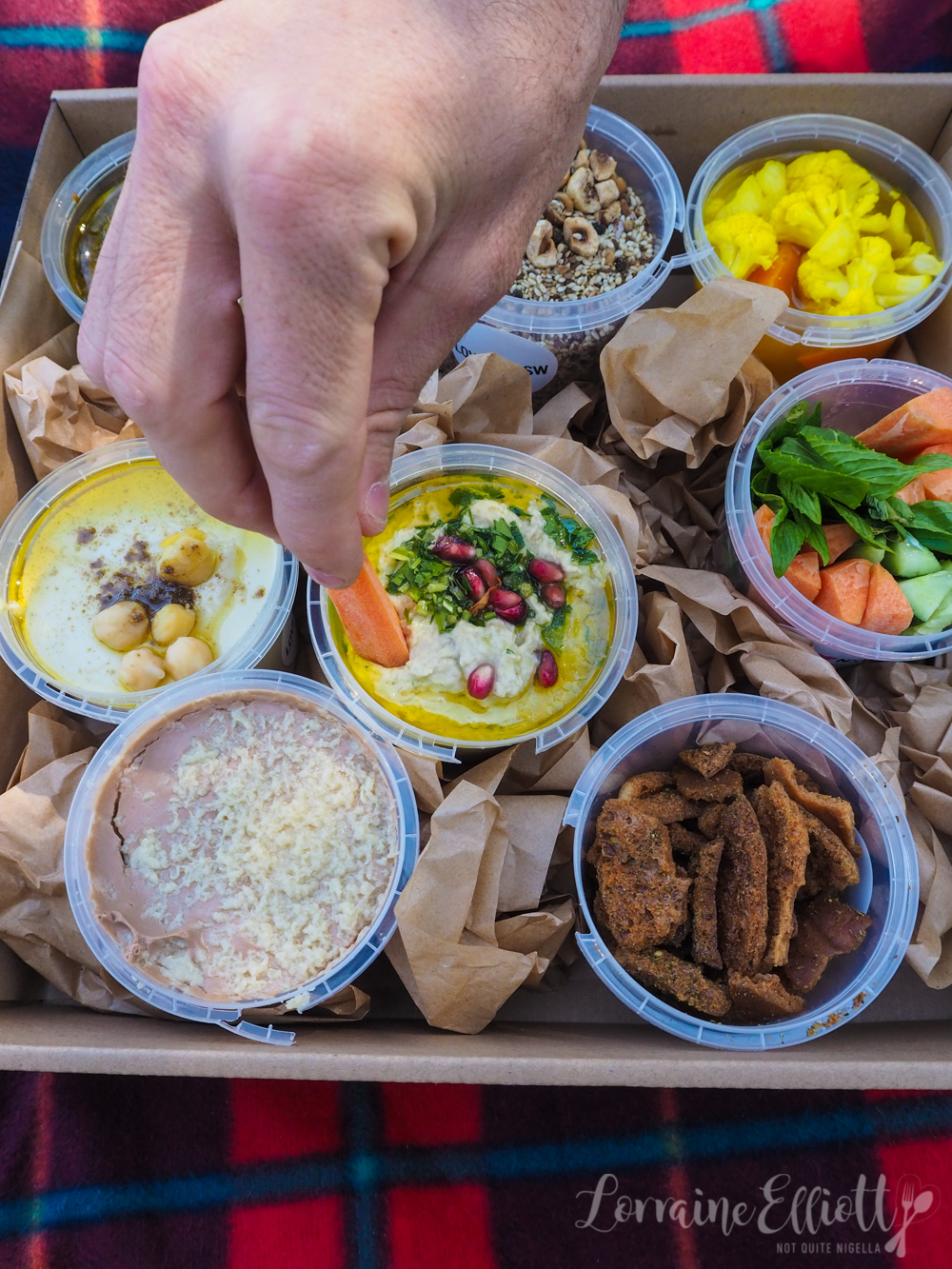 It was picnic time for Monica, Marco, Mr NQN and I. Alexandria Park is halfway between both our houses and yet still within the 5kms zone. I decided to bring along some of the goodies I was sent from LoveNSW from Kepos Street Kitchen as well as some of the salads that I bought from there.

We have a version of the Mezze box that has hummus, eggplant moutabal, zucchini tzatziki, labne za’atar, crispy pita, marinated olives, pickled cauliflower and crudités except ours has a chocolate halva mousse ($12). The dip tubs of dip are 265ml in recyclable plastic containers and are priced at $7 each. The eggplant moutabal topped with pomegranate seeds and dried herbs is everyone's favourite dip and I pair this with some bread from home. There's labne with za'atar and olive oil, chickpea topped smooth hummus and crisp pickled cauliflower and carrots. The crisps are good and great served on a salad. While there are around 35 items available to buy online, there are 65 different items in the deli fridge. The most popular items are the hummus and eggplant dip. "We always runs out no matter how much we do. We are like a factory of hummus," Michael says laughing. 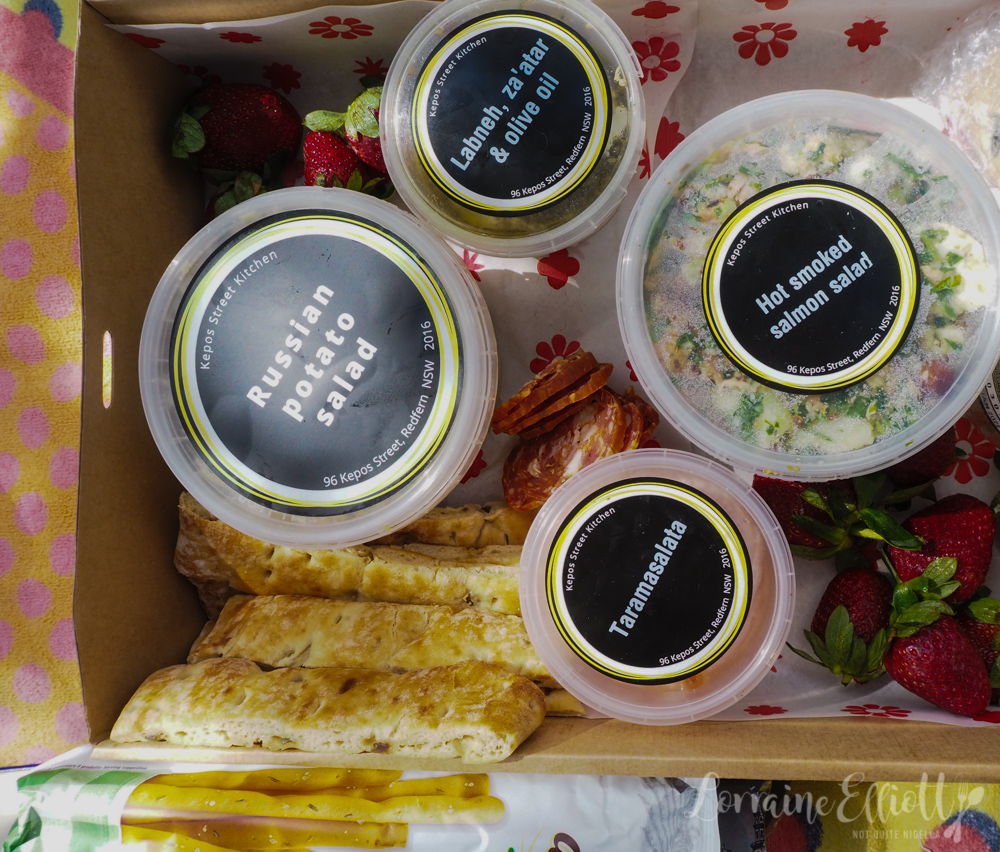 I also bought some salads and dips via click and collect and pick them up on the way to the picnic (count on a bit of extra time as the queue can be long). I ordered the Russian potato salad and the hot smoked salmon salad with dukkah as well as the taramasalata dip. The two salads come in larger 565ml containers and are good for sharing. The wood fired hot-smoked salmon salad, olives, kipflers, hard boiled egg, dukkah is nice although it is a touch dry in texture. However we love the Russian potato salad, bacon, herbs and hard boiled eggs and the taramasalata dip with the perfect level of saltiness and creaminess with salmon roe on top.

The item I am obsessed with is the chocolate mousse. It's a milk chocolate mousse with layers of sweet halva. With desserts I normally take a spoonful and am done with it but Mr NQN doesn't even get a bite of this (he claims he isn't a fan of halva or tahini and now is not the time to change his mind haha). Michael explains how this dessert was inspired by his childhood in a country town outside Tel Aviv. "As a child in Australia the thing you eat in the morning when you feel lazy is Vegemite on toast. For us as kids we would have chocolate spread and halva on hot bread. We wouldn't buy everything from one shop. One child would go pick up pita, another child would buy hummus from another shop. I would get the hot pita bread that was my job. It was still boiling hot and steamy and when you spread chocolate spread and halva it is the most delicious thing." He decided to make it for Kristy but adapted it to be a chocolate mousse with halva. "She became obsessed with it," says Michael. It doesn't appear on the online menu but is available in store. 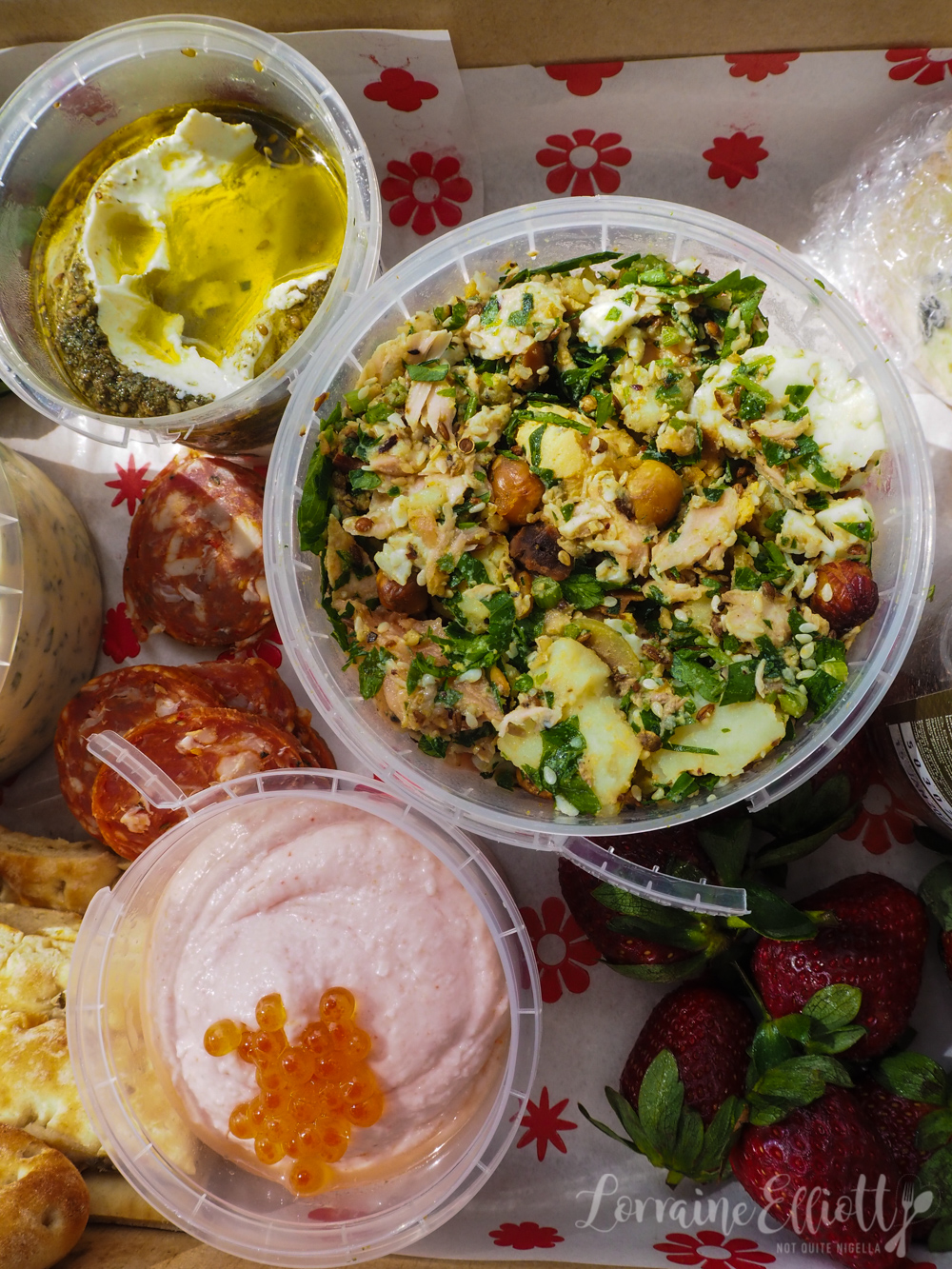 So will the deli fridge continue after lockdown? "The deli fridge is there to stay. It was one of the miracles from lockdown. People come for it specially now," says Michael. As for lockdown life with wife Kristy, "We've learnt so much we learn about each other. I'm a chef I would work almost every night I wouldn't be at home. Its been interesting we've loved it cooking together and being together," says Michael.

So tell me Dear Reader, have you ever tried chocolate and halva together? Have you been buying or making your own picnic provisions?

NQN was sent some food from LoveNSW but also independently paid for some dishes.