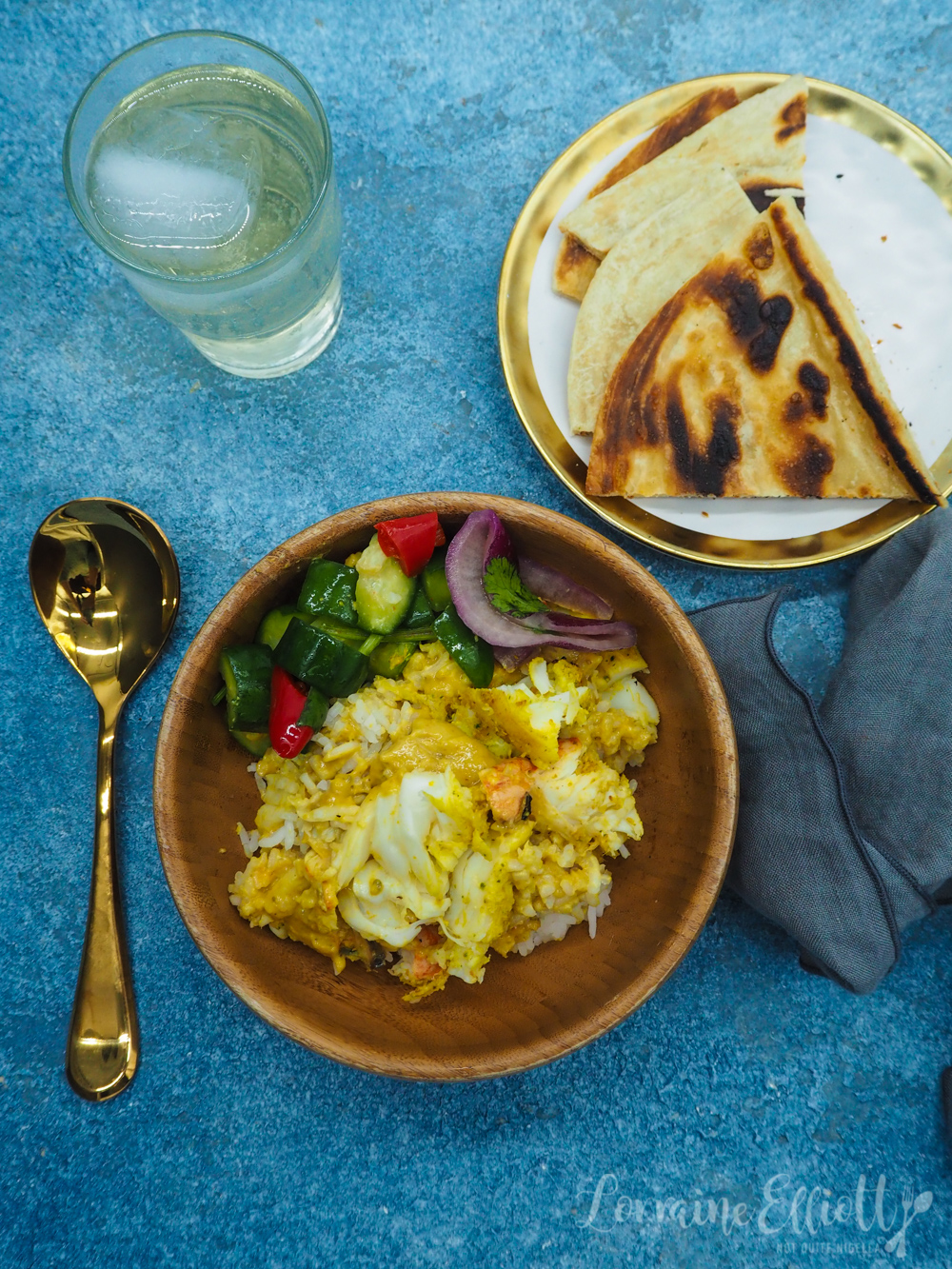 If you and your friends or family are in lockdown in separate households, try doing this mystery dinner swap game! This is where you buy a dinner surprise for the other household. It gives you something to look forward to and something to talk about and you can have dinner over zoom or face time afterwards! Take a look at how our lockdown dinner swap game worked!

Laura first told me of this dinner swap game during Lockdown 2020 when someone did it for her. The idea is to set a dollar amount and order a dinner that you think the other recipient will like and you give it to each other on the same day and then video call each other. If it's someone you know and love then it is pretty easy. It doesn't have to be high end it just should be something that you know that the recipient will enjoy? A 200 pack of chicken nuggets so they can make a tower? Sure, if that floats their boat, why not?

Laura and I know each other very well and know our tastes in food so it was fun rather than stressful (and really, only do this if you're going to enjoy it, there's no point otherwise I mean lockdown life is hard enough). I enjoyed scouring the internet for offerings (I love reading menus!). Initially Laura and I decided to set our limit for $100 but then she said that she found the perfect thing for me for $125 so we upped the limit.

"I've picked something for you," I said to Laura.

"What if we've got each other the same thing?!" I said laughing. 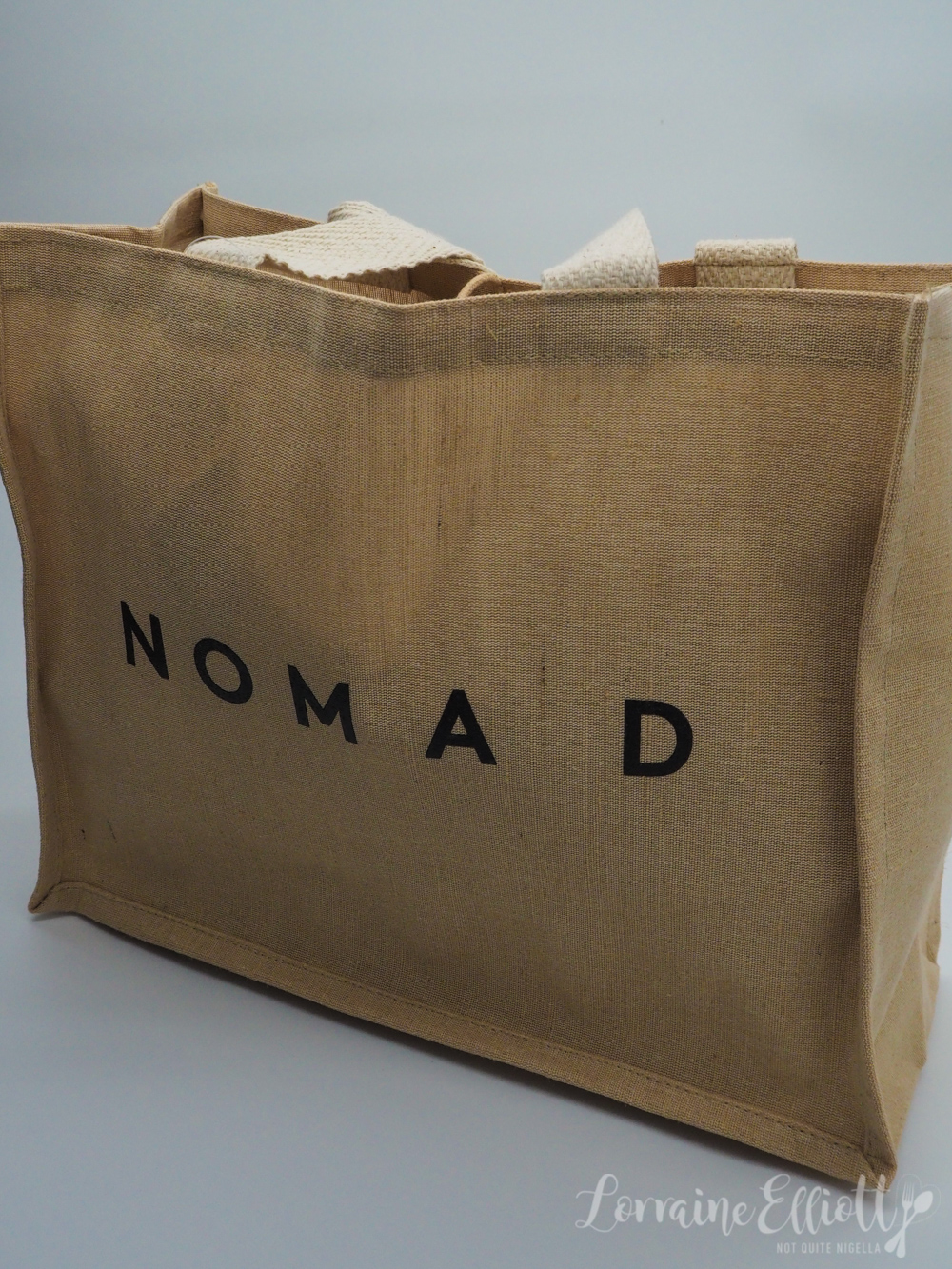 I knew that NOMAD were doing takeaway dinners and and as soon as I saw that there was a Portuguese meal available for $120 I ordered it for Laura. In early 2020 just before COVID had started, Laura had been to Portugal and followed my blog stories eating at the same restaurants. Although I wasn't with her, she said that it felt like I was travelling with her so I decided to order it for sentimental reasons. I also ordered her a bombolini donut (flavour changes daily) to get it over the $125 limit.

The Portuguese meal was also good because it was Peri Peri chicken and Laura doesn't eat red meat or pork. However she is also allergic to capsicum or bell peppers (not chilli) so I emailed them just to double check. They responded the next day confirming that there was absolutely no capsicum. Just to make sure, I sent them an email once I ordered to confirm this. The day that I was supposed to pick it up (which was actually Friday, the day before the swap), I got a phone call from a staff member. It was about the capsicum.

It turned out that that morning the chef had decided to add capsicum into all of the courses of the meal. Not only was it in the Peri Peri chicken (it's not usually an ingredient in authentic piri piri sauce) but in the salad and sauces.

It had gone from no capsicum to a capsicum degustation.

"Ok well I think you'd better cancel my order then," I said sighing. I was already going through my mental list of menus looking for substitutes. 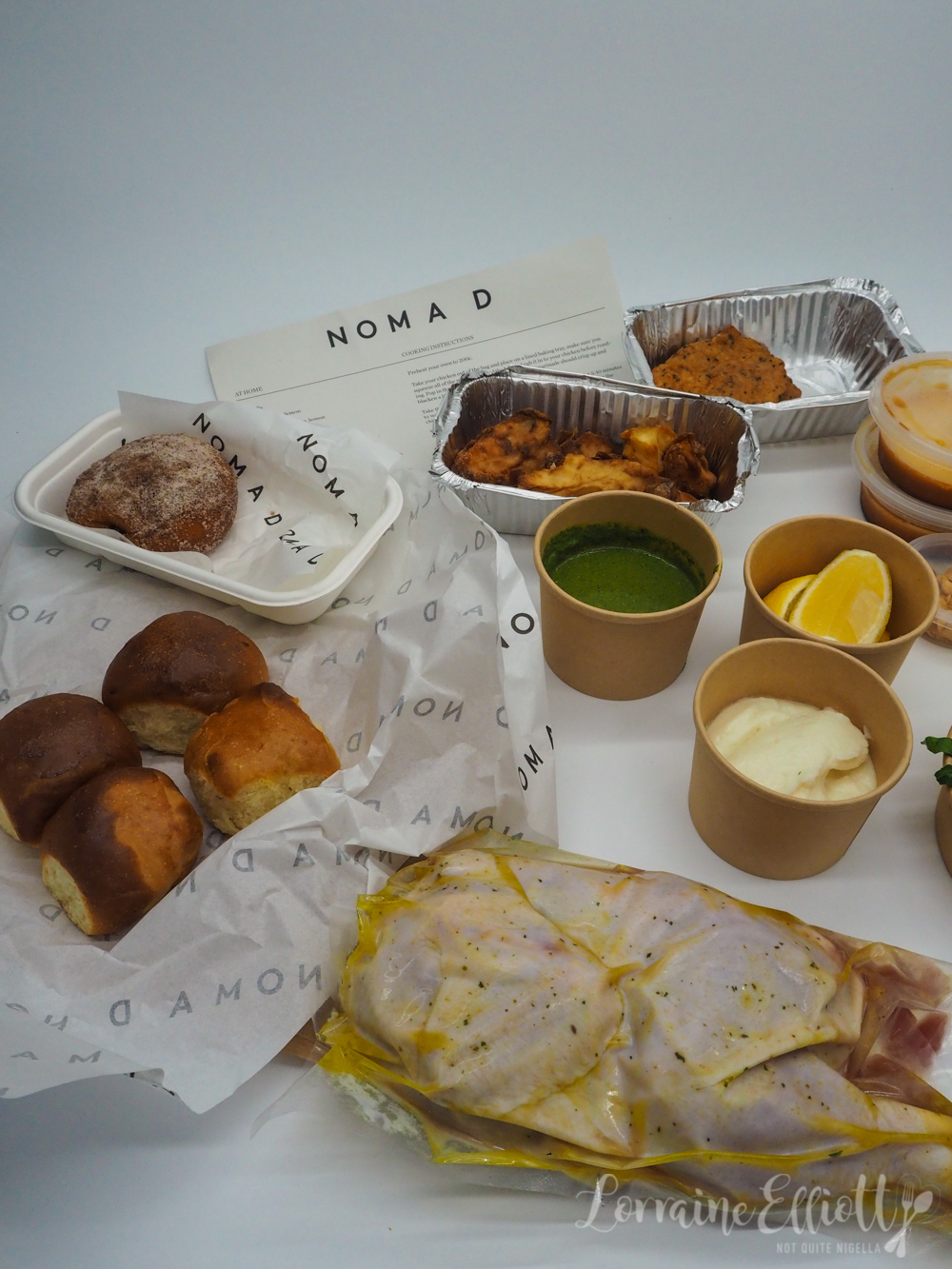 But the lady on the line was undeterred, especially when she heard that it was for tomorrow night's dinner. She offered to chat to the chef and see if there was anything they could do. 30 minutes later she called me back with some flavour substitution ideas and the meal was back on. The bombolini flavour on the Friday was a Portuguese custard tart which she would have loved but Saturday's flavour was apple pie to coincide with their American menu that night. When I went to pick it up I was surprised to see that the chicken was uncooked. One thing that we noticed with all of these restaurant dinners is that while there was a menu, you didn't know a lot about how much preparation is needed. Some places just require heating up, others require you to cook it which would be handy to know. 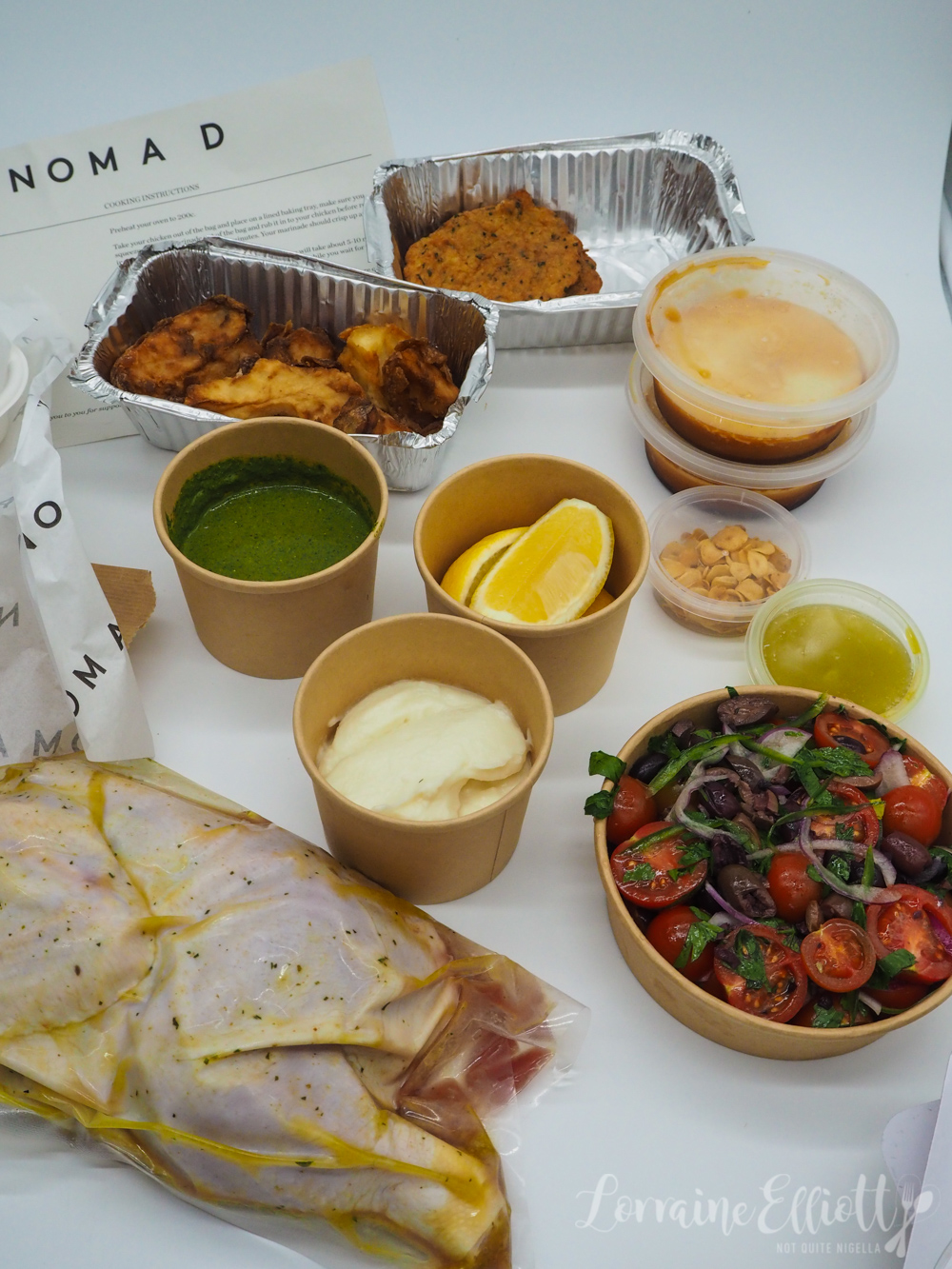 As we waited for the swap to take place I said to Mr NQN, "I hope she likes it! I wonder what she has got us!". It was the highlight of the day, nay the weekend and I had been looking forward to it all week long. The only clues that Laura had given me was that it was lush and that she chose me something that she would have loved to have eaten herself. "Hopefully it’s a big fruit plate," joked Mr NQN. Laura texted me that she was at my house. I left her meal outside my door and she came upstairs to take it and left me mine. I couldn't wait to open the door to see what it was. 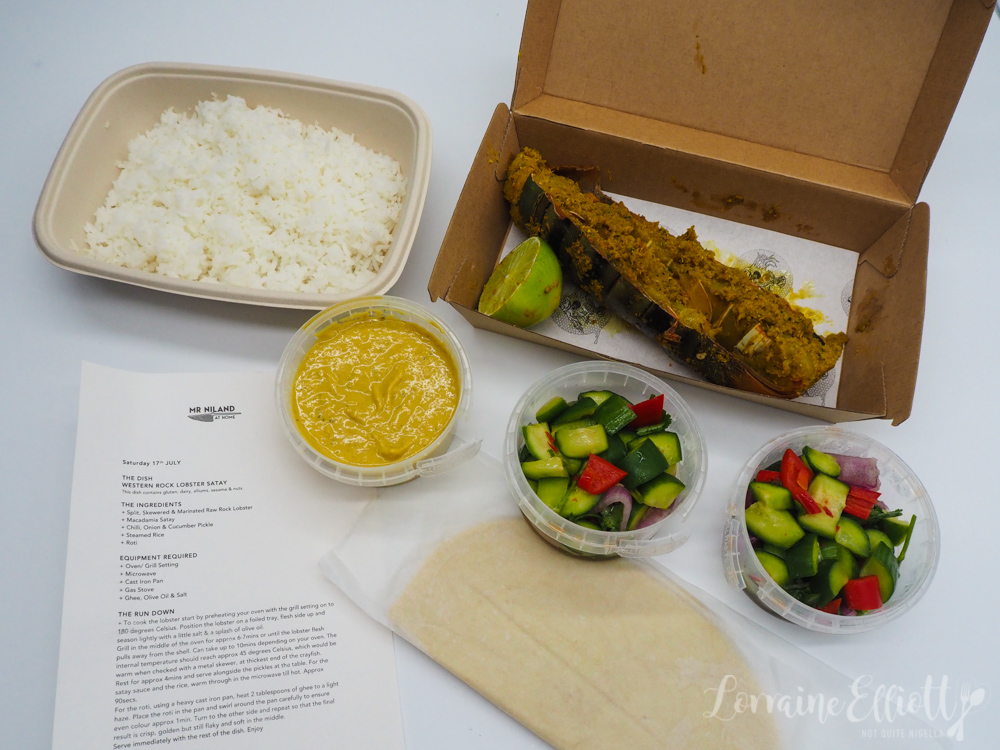 As soon as I saw it I squealed. It was a Western Rock Lobster Satay from Mr Niland At Home, the lockdown takeaway arm of Saint Peter in Paddington! I had actually wanted to get it myself but it was sold out and sometimes you don't want to spend that much money on yourself but spending it on someone else is more natural. 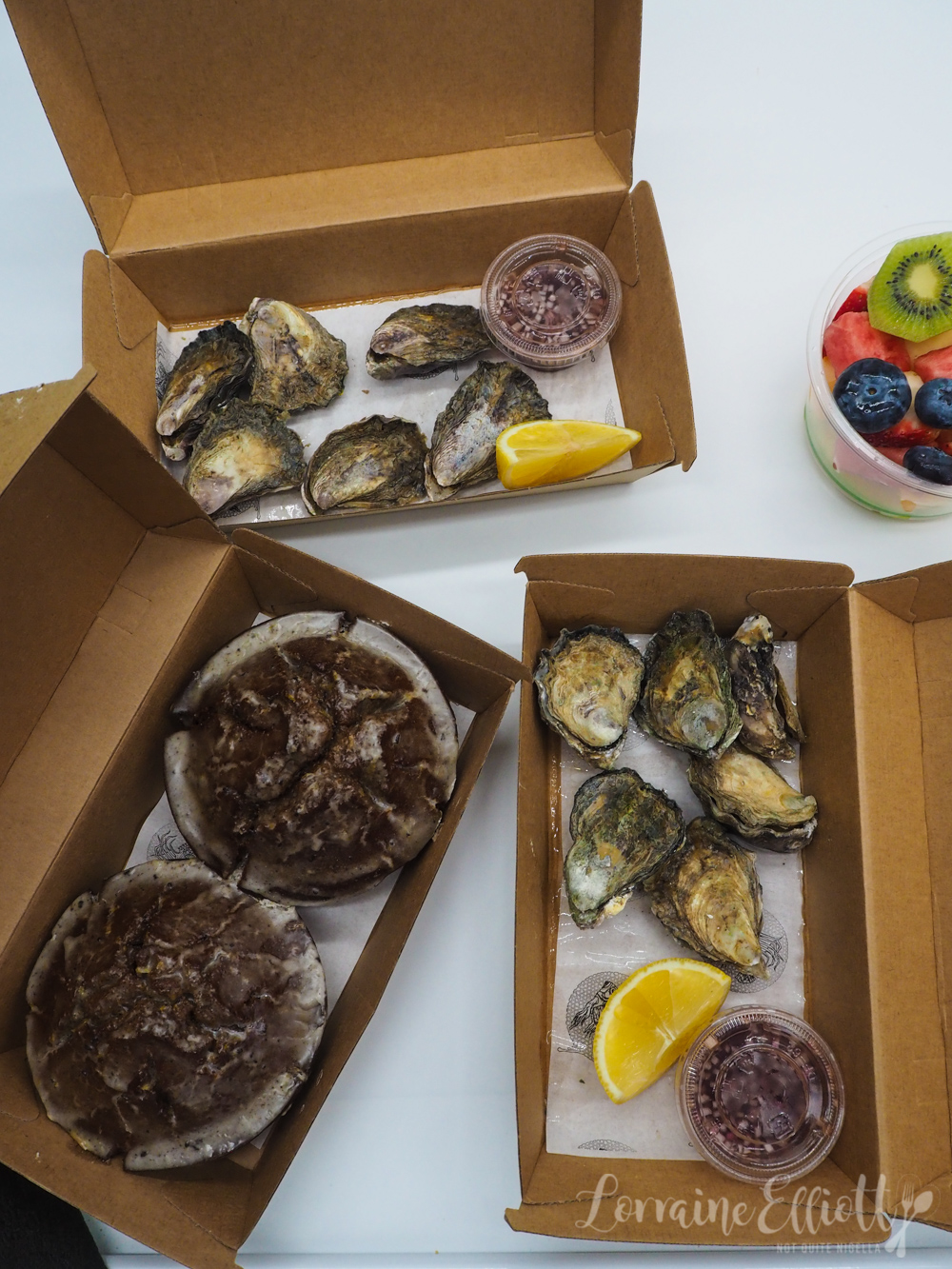 Not only was there the lobster, but a dozen Moonlight Kiss oysters with mignonette dressing, two enormous earl Grey tea cakes and a little bonus for Mr NQN, a fruit salad. Laura had thoroughly spoiled us. 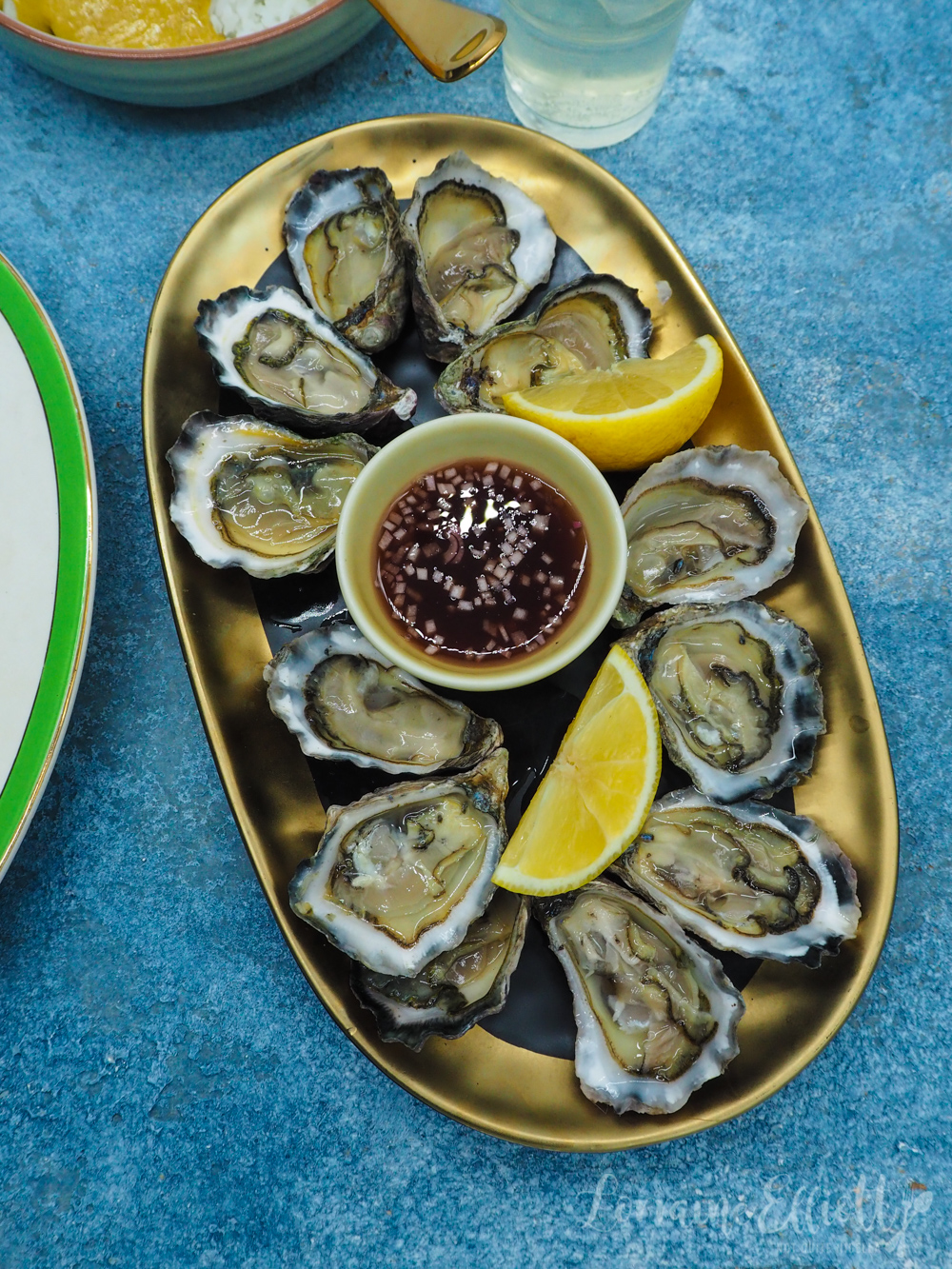 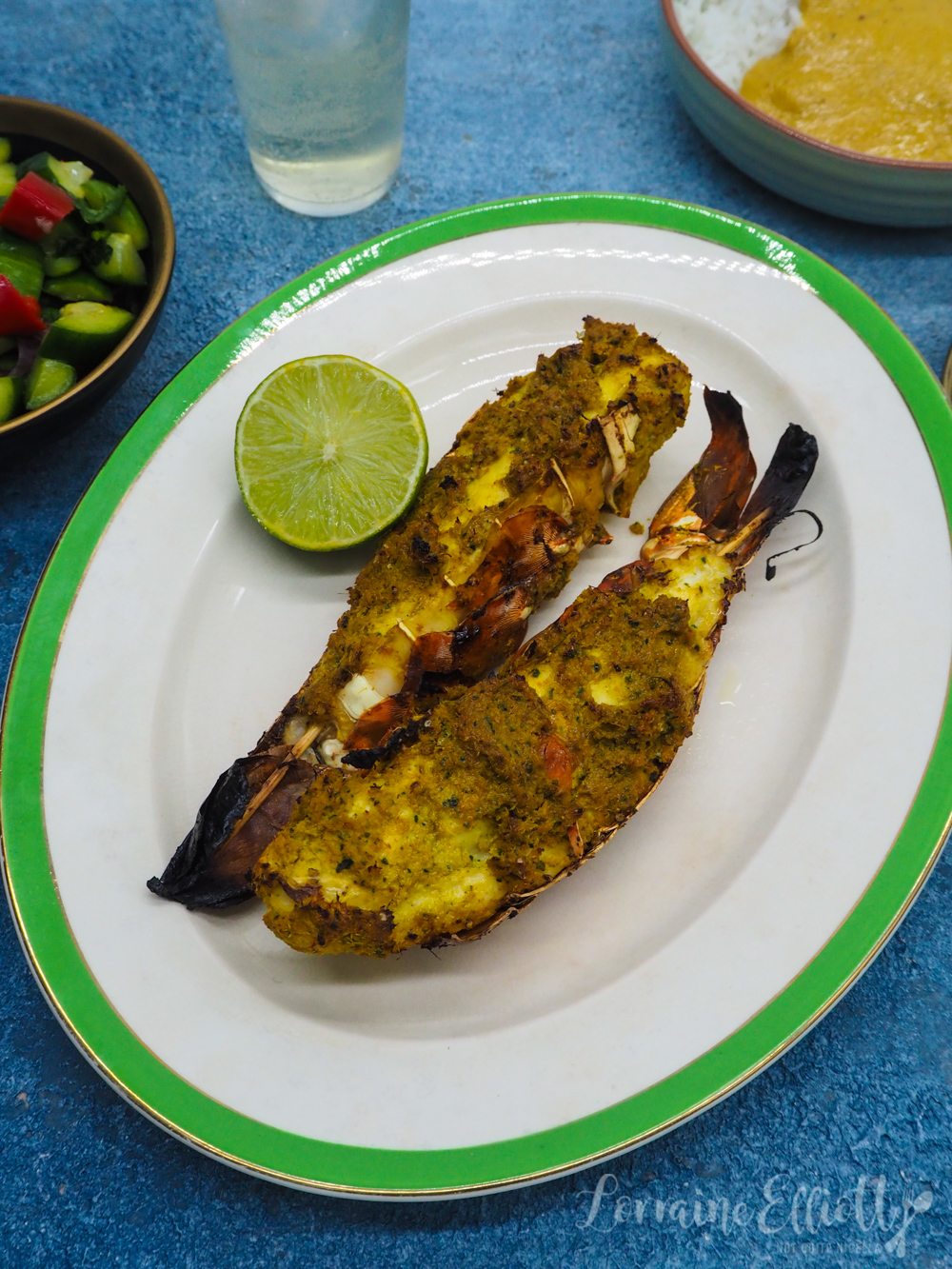 We started with the oysters and mignonette sauce and then went onto the lobster dinner. It was absolutely delicious-the lobster had so much flavour and it was really nice and comforting to eat such a fancy bowl meal. The only part I didn't particularly go for was the roti-I love the buttery, flaky rotis while this was a drier, plain bread. 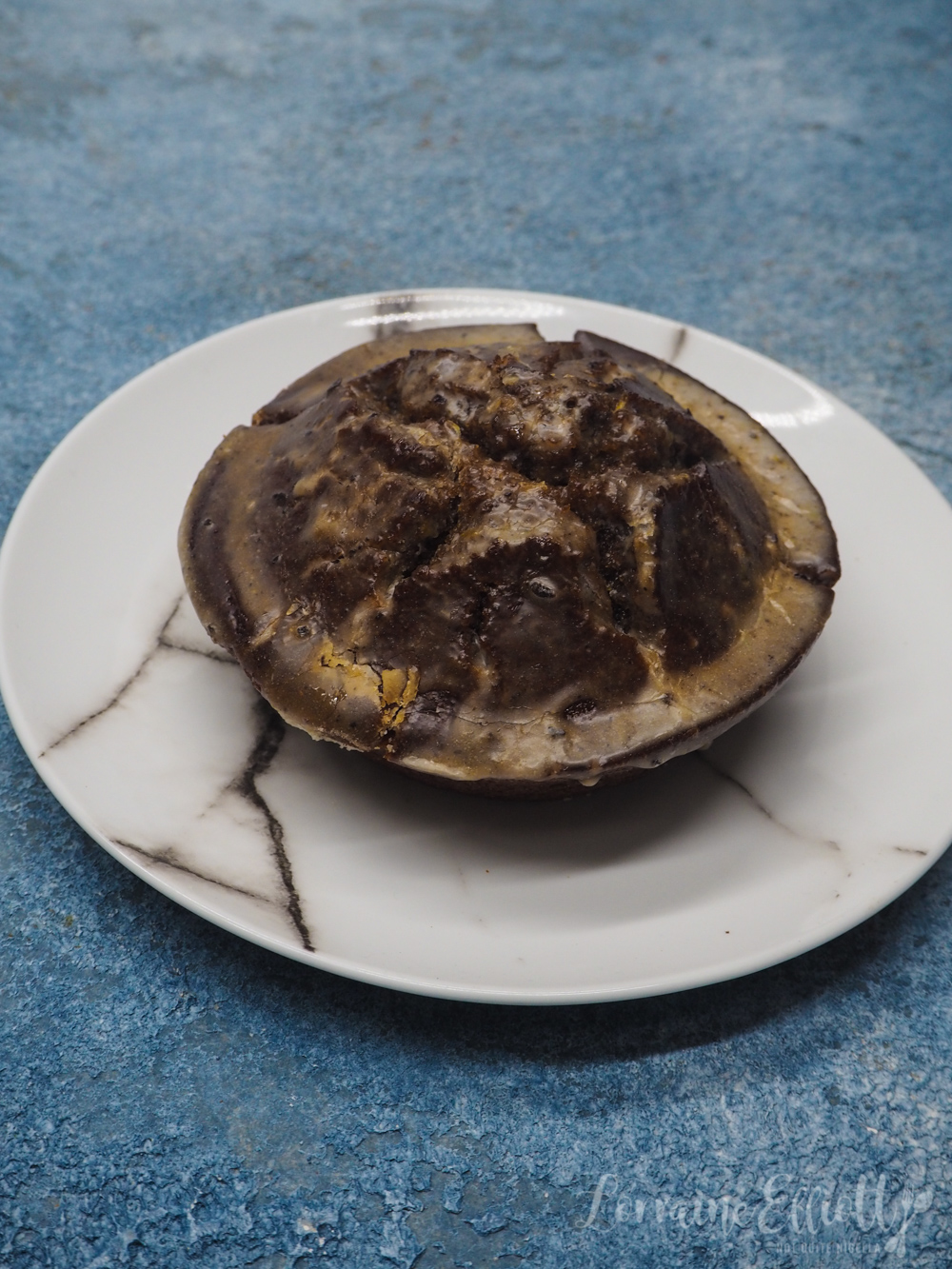 For dessert there were two Earl Grey and Vanilla tea cakes that were enormous and tasty. They were baked fresh so they were very light in texture and had an almost gingerbread sort of aroma to them. Mr NQN enjoyed his fruit salad while I ate cake.

I asked Laura how her NOMAD food was. "Delicious salt cod fritters, soft on the inside and crispy on the outside, which heated up perfectly in the oven. The fritters went really with the punchy green (mystery) sauce. I also added a little mayo from the fridge. The chicken looked simple, but was a taste bomb, with juicy flesh and a crispy lemon skin. I used the dinner rolls to make little chicken sandwiches. The garlic potatoes were ok, but the garlic sauce was silky and was a great addition to my DIY chicken sambo. The meal ended on a sweet note with the caramel flan, with had a luscious milky like jelly consistency and a sauce, that was taken to right side of burnt," she said.

After dinner we face timed with Laura and her mother Sheryl. They loved their dinner although the instructions didn't really make sense, perhaps because there were so many substitutions in the menu. Even Teddy gets in on the action and when he sees Laura and Sheryl on my phone he rushes to the door expecting to see her on the other side! Poor Teddy doesn't really understand Lockdown or COVID rules!

So tell me Dear Reader, would you ever do a dinner swap? What sort of meal would be your ideal meal to receive?

All meals were independently paid for.