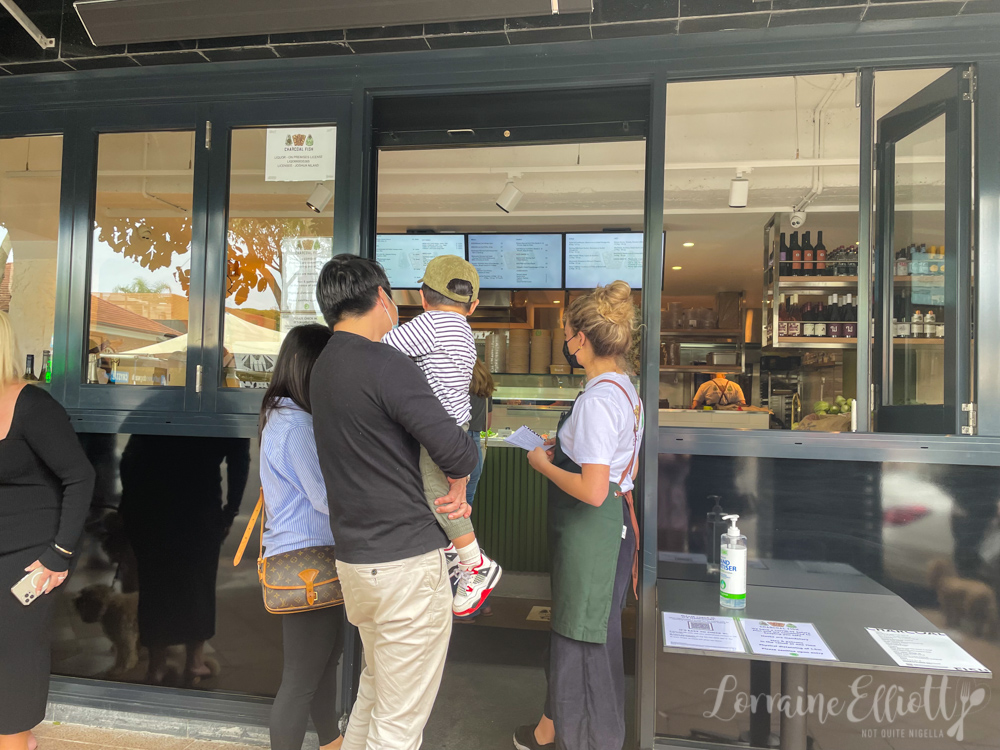 Charcoal Fish is the brand new fish and chips takeaway shop from Josh and Julie Niland of Saint Peter and Fish Butchery. It's a unique proposition where they dedicate their (almost) entire fish selection to one type of fish: the Australian Murray Cod. Be it in classic fish and chips, a fish, skin and stuffing gravy bun or cocktails! 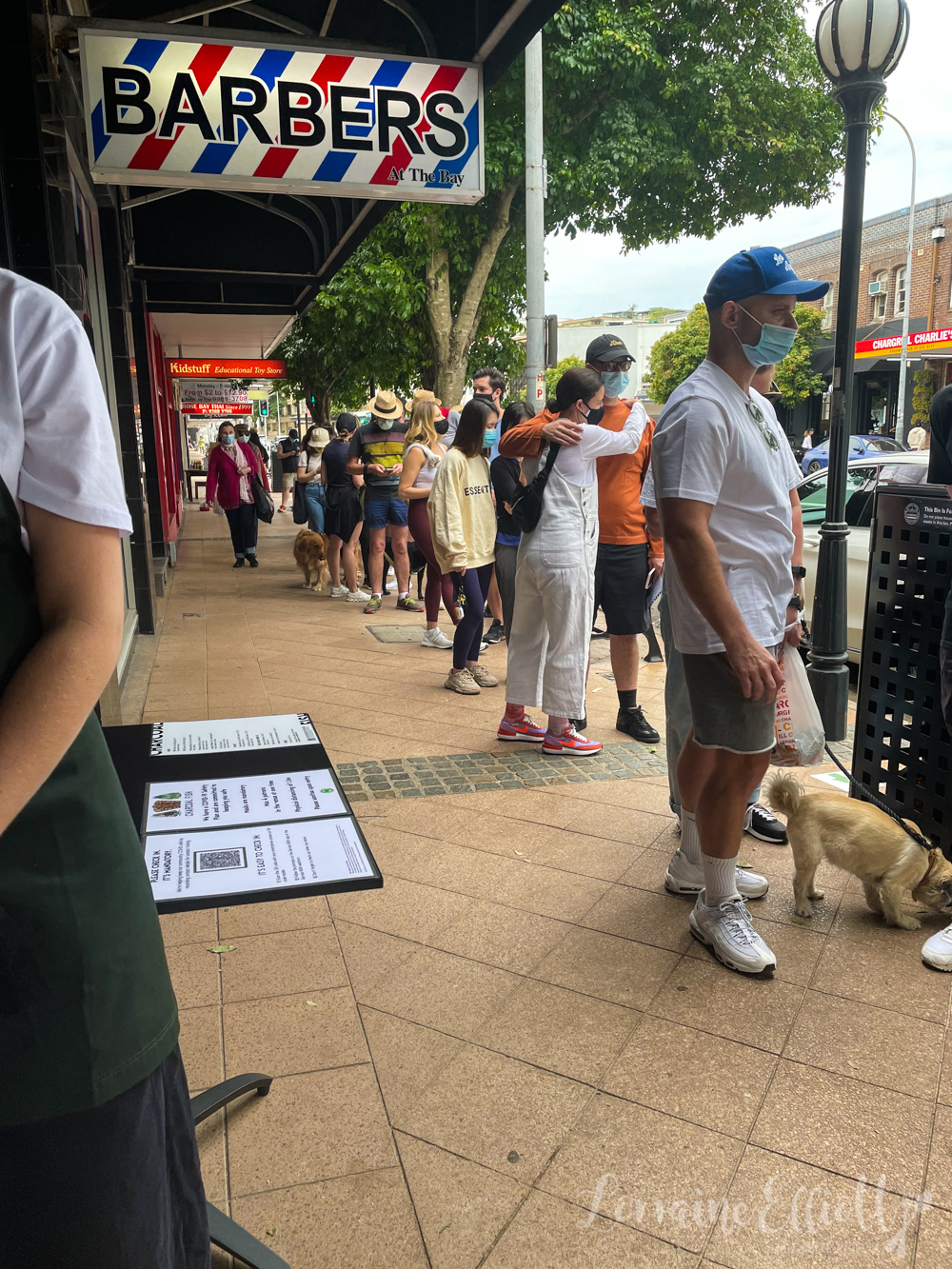 "There's about 100 people," comes the message from Laura, in the queue outside of Charcoal Fish on New South Head Road in Rose Bay. The fish shop opened just three days prior and the plan was to get there 15 minutes before it opened. Surely with 5kms restrictions, the lines wouldn't be so long.

Oh how foolish we were.

"Okay I exaggerated, it's more like 30 people long," adds Laura when I suggest ditching the queue and getting takeaway elsewhere. 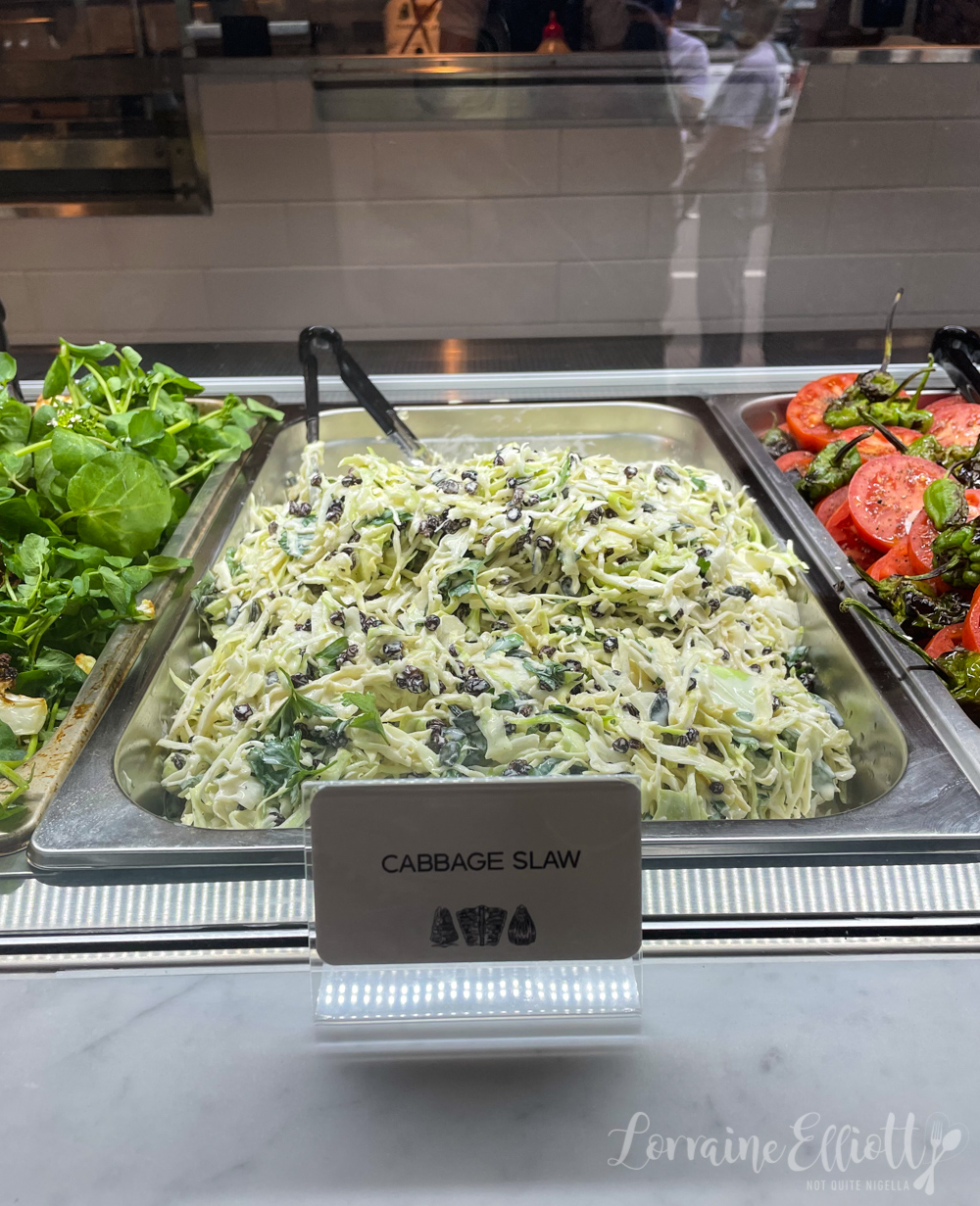 The whole shop bar one item is dedicated to the Murray Cod, a native Australian freshwater fish that can be grow to enormous sizes. It's an interesting idea dedicating your store to one fish species, especially as Australians tend to be obsessed with other fish like salmon. The Murray Cod for Charcoal Fish is sourced from Aquna in Griffith, NSW and is pond grown so it doesn't have a muddy flavour that you can sometimes get with wild Murray Cod. Here the Murray Cod is used in myriad ways from classic fish and chips to fish caramel with 92% of the fish being used. The logic is that like a rotisserie chicken shops only sells one type of chicken, they will do the same with one variety of fish. 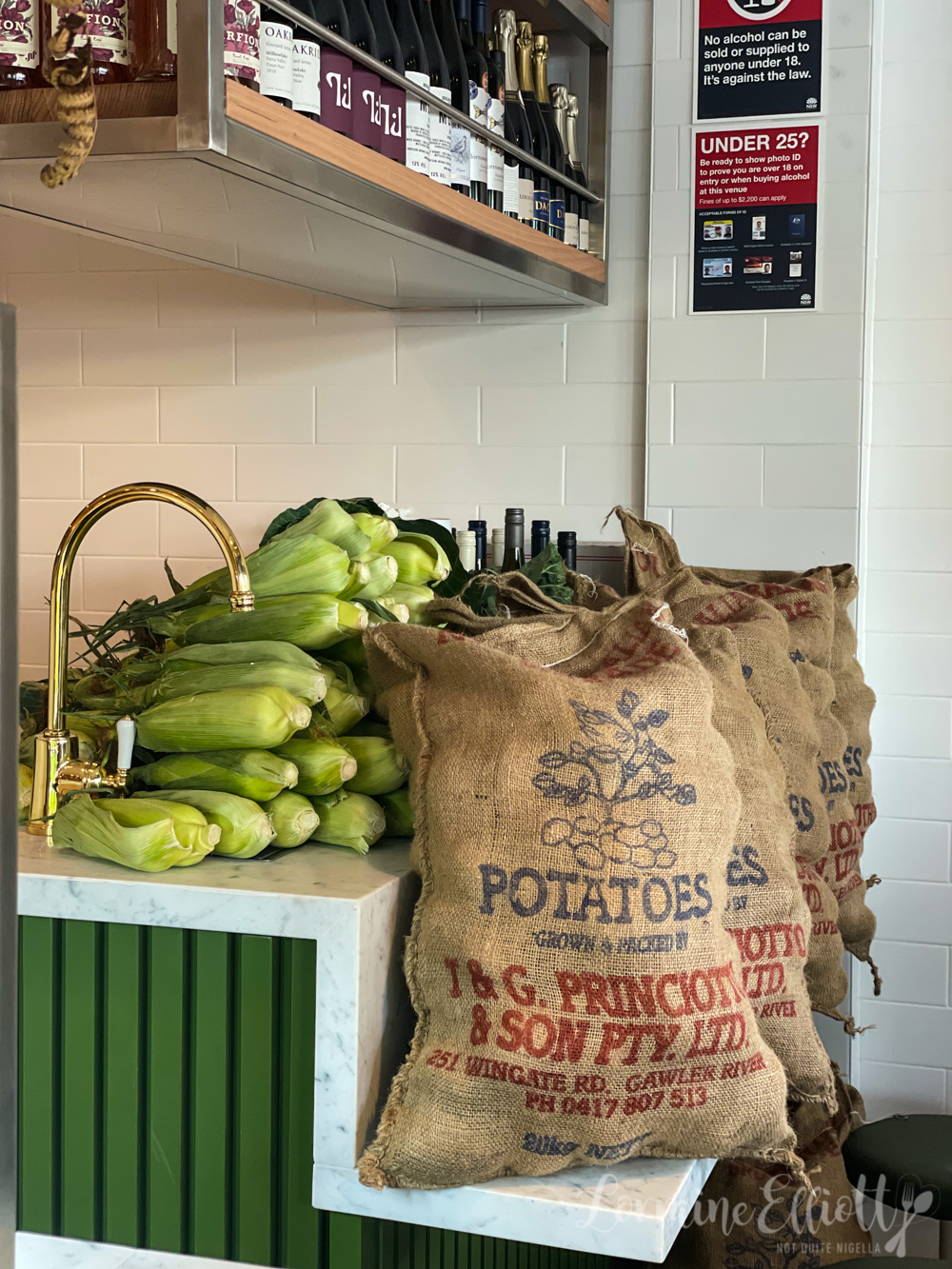 So back to the queue. I'm so used to contactless deliveries it feels odd to be queuing up like old times. The wait in the queue is around 45 minutes and only four customers are allowed in the store at any one time and we already researched what we wanted so it's bang bang bang and 10 minutes later they call our number. All in all we ordered $170 worth of food with 2 cocktails for three people. A few things go missing-the sauces that we'd ordered and paid for weren't in the bag but by the time we noticed we were already in our picnic location at Rose Bay Park and nobody could be bothered going back. 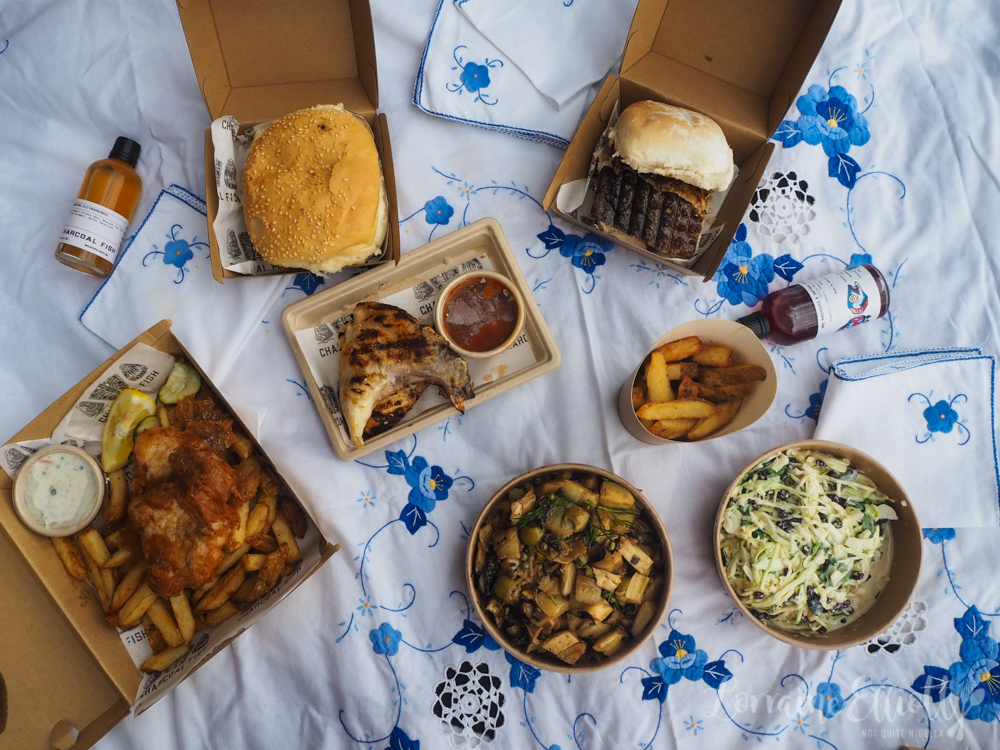 We tried two cocktails-the cocktail menu has a negroni, old fashioned and a martini and we ordered the first two. These are made by the sustainable bar Re at Carriageworks and are $22 each. The Old Fashioned has The Gospel Solera Rye, burnt beetroot and a Murray Cod Fat Salted Caramel which actually doesn't really give it a fishy flavour (which is what most people were asking about) perhaps because of the other strong flavours in the cocktail. The Negroni is made with flavours of BBQ radicchio and Tasmanian Saffron and is nuanced and fantastic. 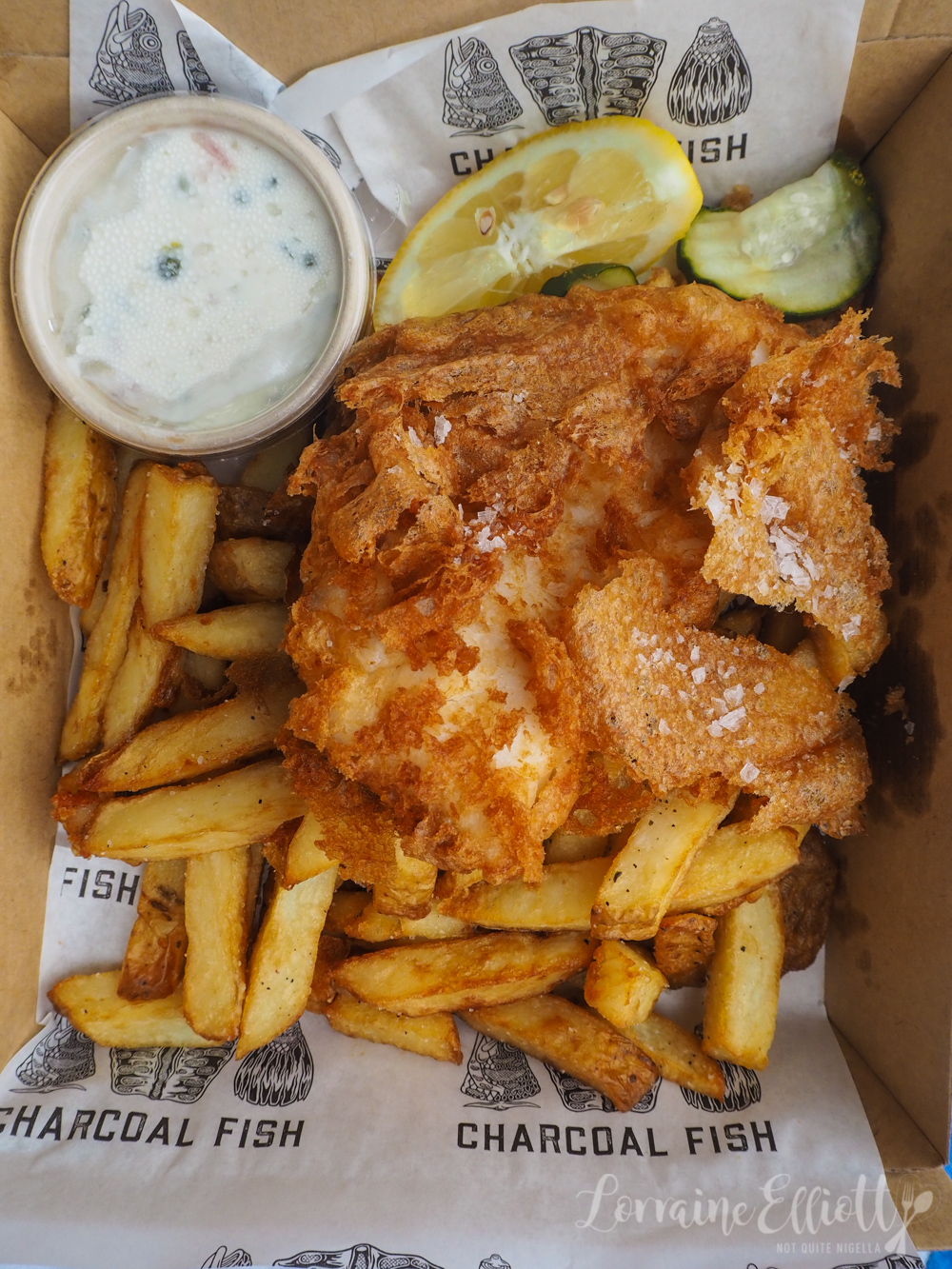 First things first: fish and chips. The Murray cod fish and chips comes with three slices of pickles (not the half pickle shown in their Instagram shot) and a tub of yogurt tartare and wedge of lemon. The chips are good-old fashioned hand cut numbers with the skin on. The fish itself is softer in texture and a touch dry under that crisp, golden shell. Not unpleasantly so although I don't think I'd necessarily come back for this and at $28 a serve it prices it out of a casual takeaway. 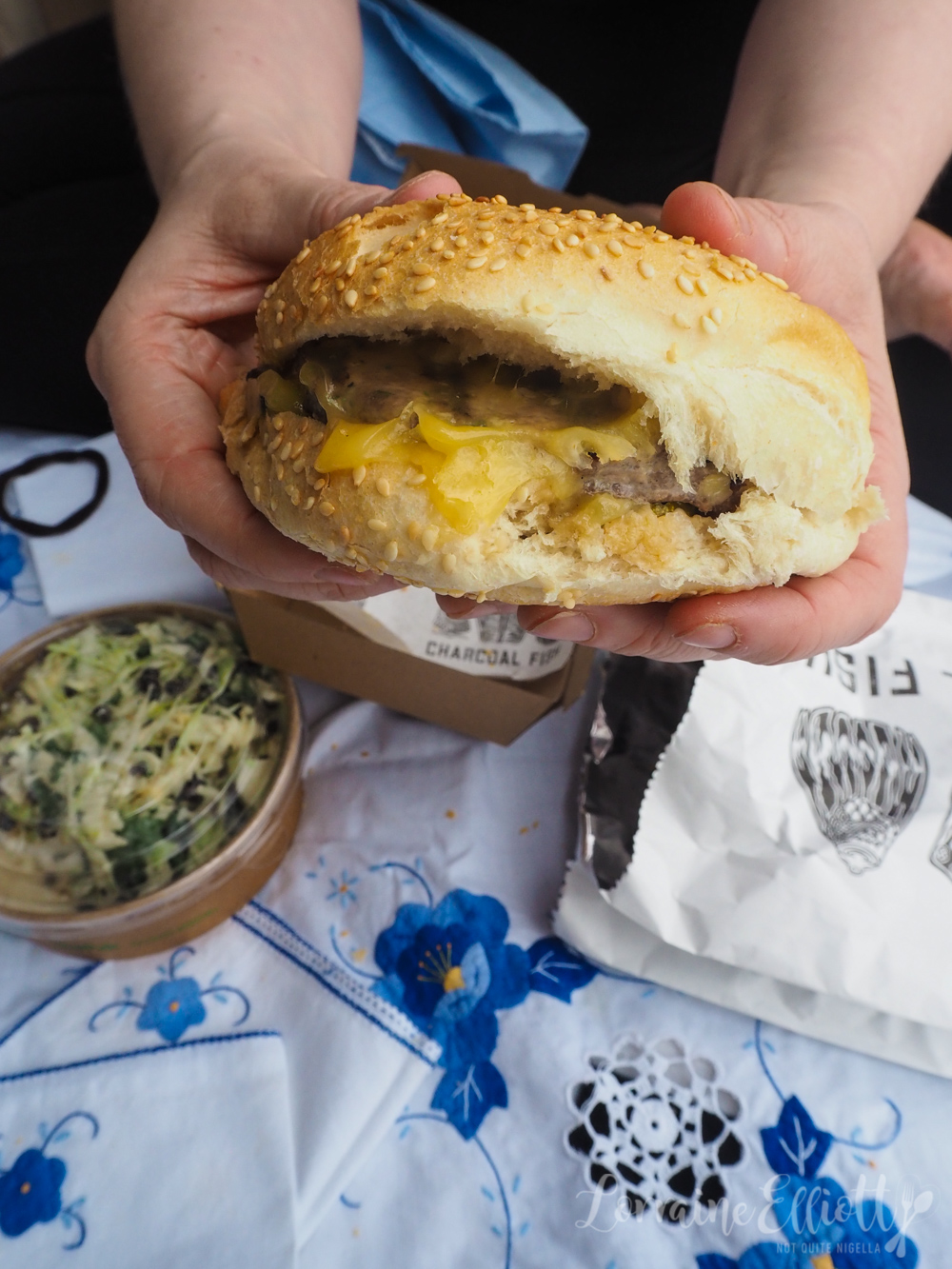 I'm much, much more likely to come back for the yellowfin tuna cheeseburger. This is the only non Murray Cod fish item and it is the unanimous favourite. "Woah," says Laura taking the first bite. "It tastes just like beef or what I remember of it". It's been 19 years since sometime vegetarian Laura ate beef and she isn't quite sure what to think of it-I mean it tastes like beef but it's...tuna? I try a bite and blow me over, if you didn't know that it was tuna you'd absolutely assume that this was an utterly delicious beef burger. The sauce and Cheddar really help in mimicking a beef burger taste. I'd order this again in a flash and after some initial hesitation Laura wants more. 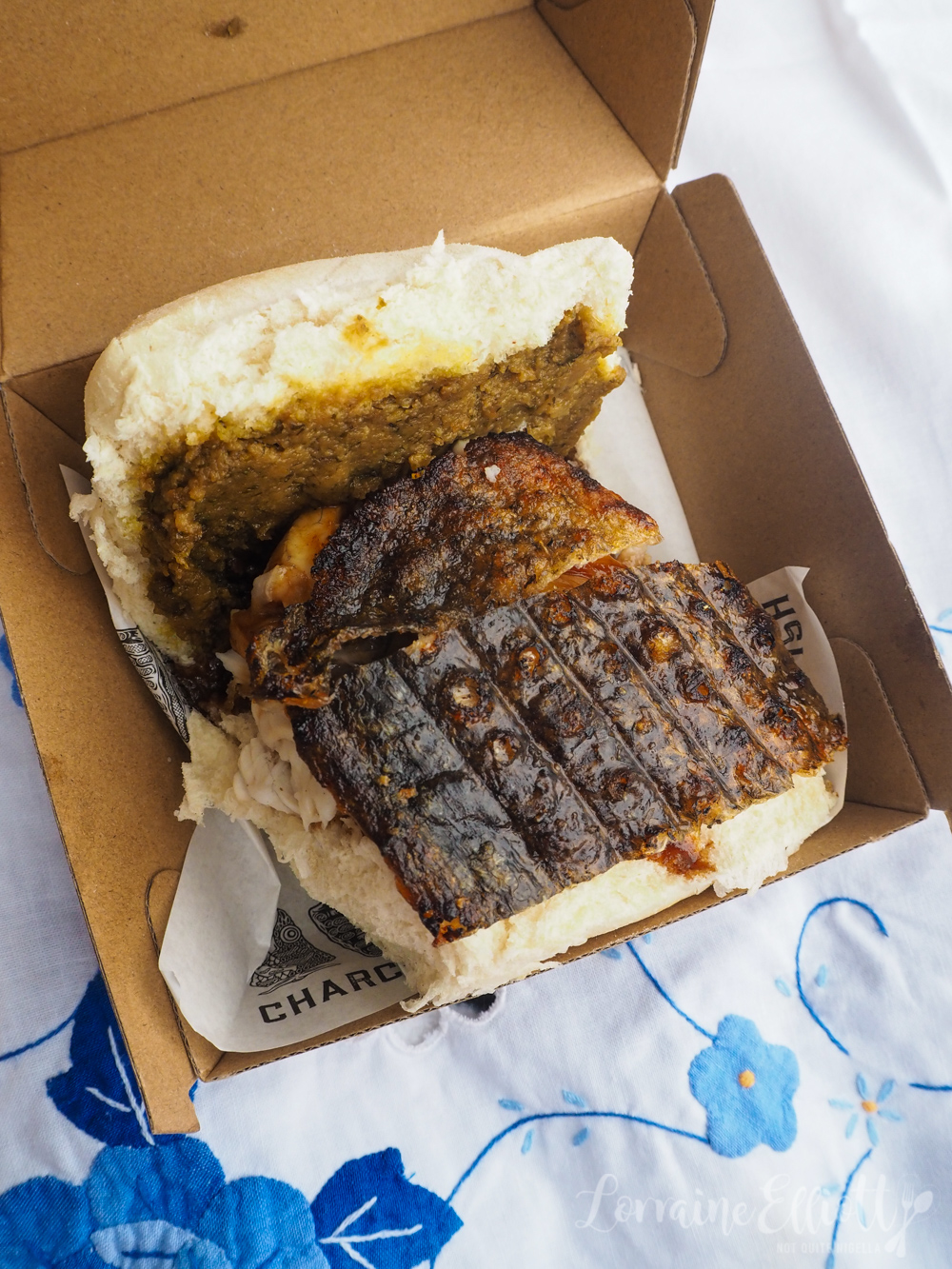 The gravy roll is what some foodies have been rhapsodising over. It's a flour dusted bap roll with a fillet of Murray cod, a thick spread of stuffing with two slices of crispy skin and gravy. It's nice with a comforting familiarity texture-wise with a chicken stuffing roll but it's a hard act to follow the burger. 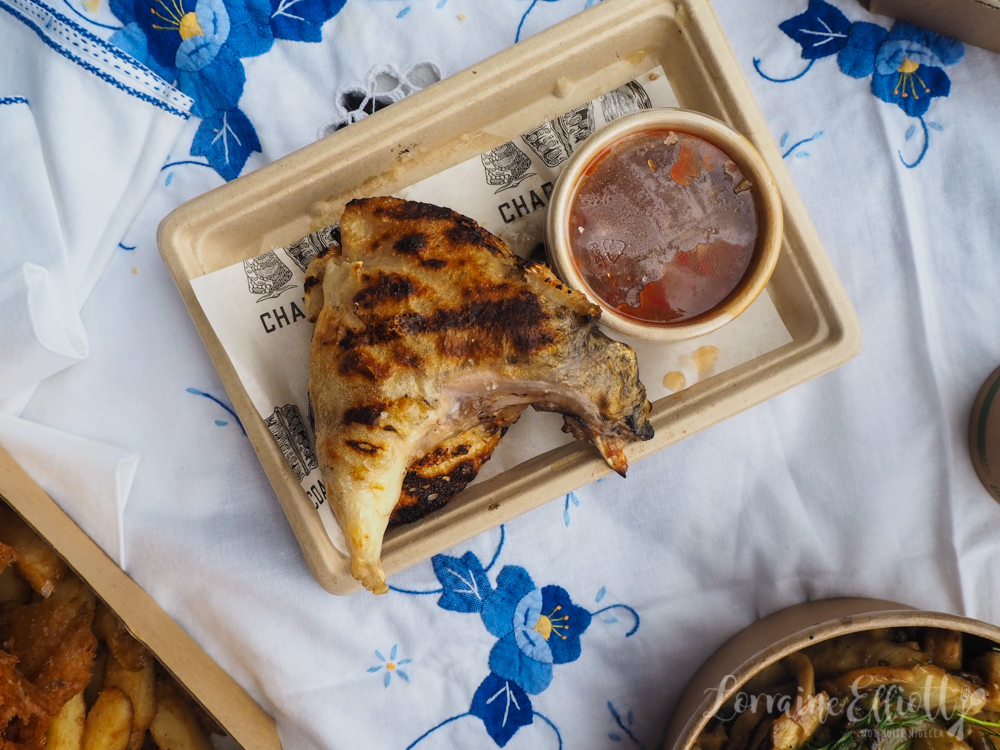 The fish wings come two to a serve and they are simply grilled. There's a morsels of meat in the wings and they come with a tamarind hot sauce on the side that is garlicky and hot. I've had wings other places where they've treated them like chicken wings which is creative whereas this is more something you could do at home. 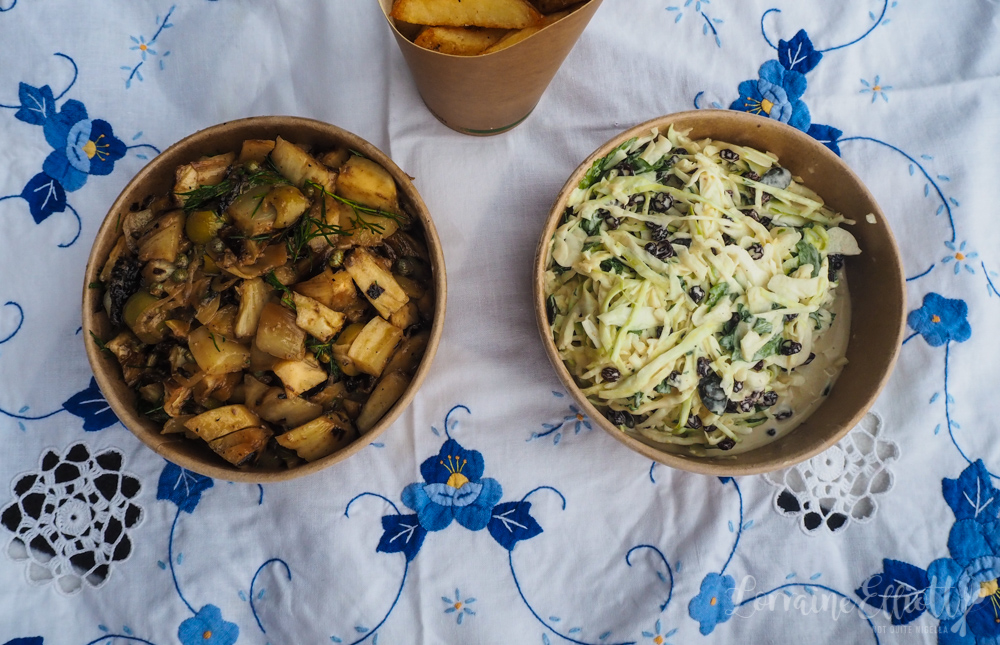 We chose two salads and they're both fantastic. The coleslaw is a classic salad with currants added to it. It is a good accompaniment to the fish (especially for the family packs designed to feed 4 people). The fennel salad is also another favourite with sweet barbecued fennel slices paired with olives, capers and shallots.