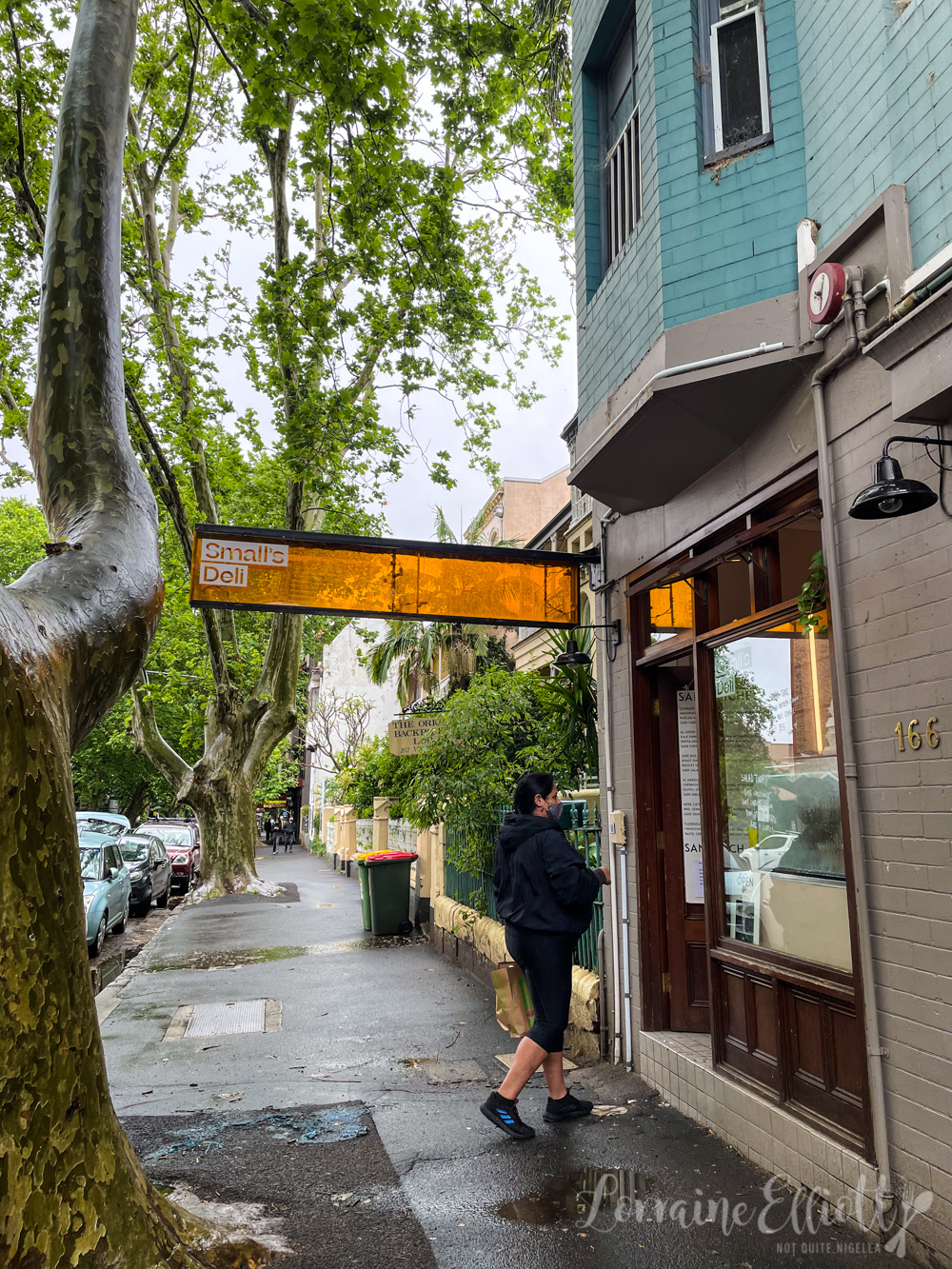 Small's Deli in Potts Point is a popular sandwicherie on Victoria Street in Potts Point. There you'll find original but incredibly tasty sandwiches that showcase the art of sandwich making. The Al Green is a must-try vegetarian sandwich or Florence and the Aubergine is a rich, luscious delight, all served on Iggy's bread.

The couple behind Small's Deli are designer Emily Van Loon and Ben Shemesh, formerly of Dear Saint Eloise. Emily explains, "We wanted to add a European-style sandwich shop to the Sydney food scene. Benni is pretty insistent on sticking to one style of sandwich and doesn't want it to be a 'sandwiches of the world' kind of place. He wants you to know what kind of sandwich you're going to get at Small's and for people to come because we are consistent on that." The shop was crowned Small's because it is a tiny sliver of a shopfront but there's also a tiny nod to the New York jazz club, Small’s. 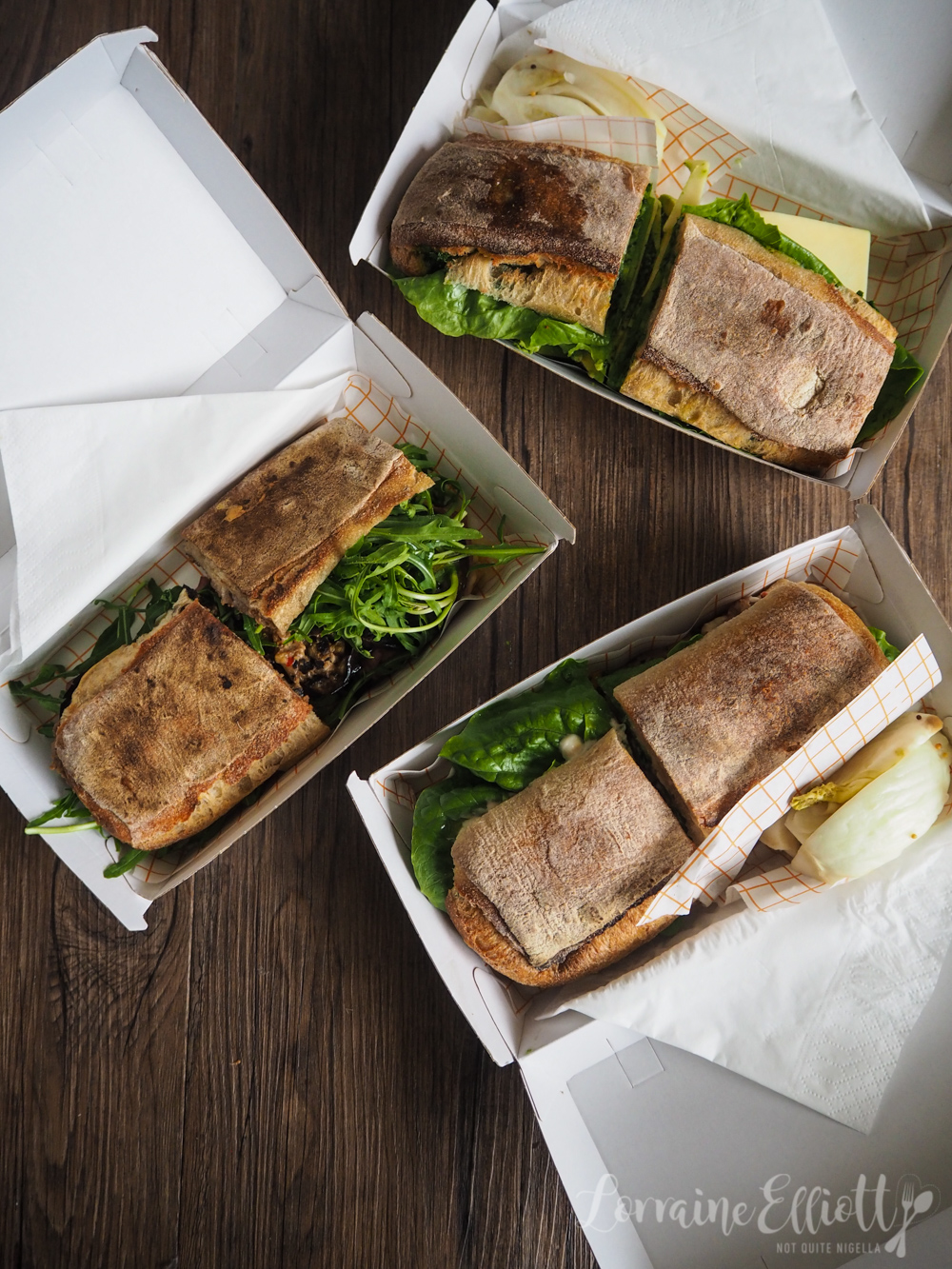 Small's has worked well around lockdowns. "We actually opened the business 2 weeks before the first lockdown when Covid first landed on our shores. If we had’ve known what the next year or so would bring us we may have held off a little with our plans but here we were deep into a big fit-out with no turning back. Turns out, the lockdown was pretty good for us. Being a small space that relies on takeaway we were well set up for the challenges ahead. The first lockdown gave us a great headstart. With everyone home and able to go out for essentials we quickly became a destination for many in the area. This lockdown was much the same," says Emily. 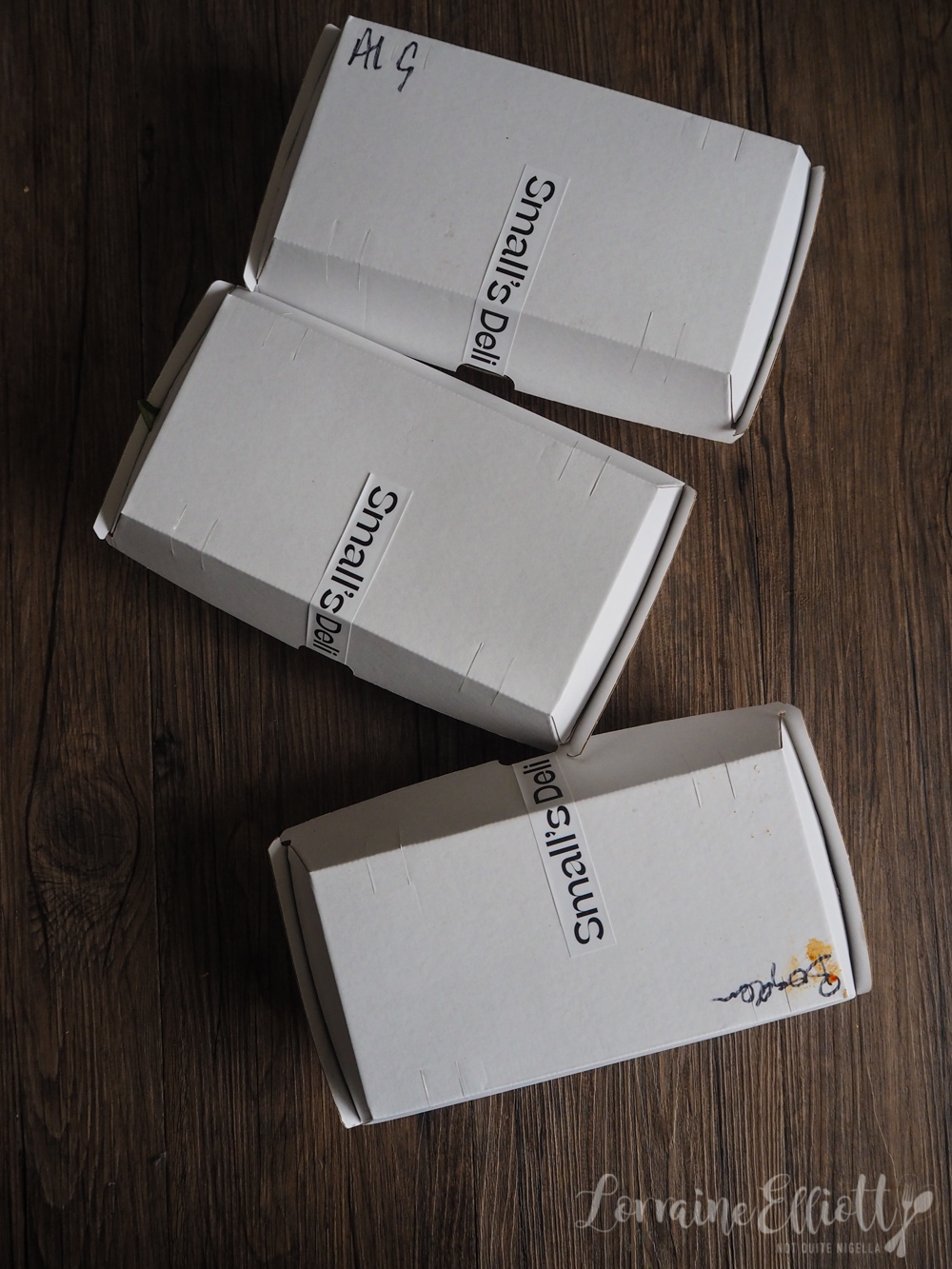 It's a short and sweet menu with six sandwiches and a special or two along with salads and a soup. So how do they come about with creating a sandwich worthy of a place on this short menu? "This process happens in a few different ways. Sometimes we start with a name that has been inspired by someone or something. We'll then start bouncing around ingredients and ideas. Usually a discussion with Shane our veg supplier @vegebox or our meat supplier Marcus @wholebeastbutchery to discuss logistics and what's in season. We're open Tuesday to Sunday so sometimes we'll prep and try things out on a Tuesday so that a new special can be ready on a Wednesday. Other times we just wing it and perfect it as we go," explains Emily.

You can also pre-order sandwiches which I recommend especially on Fridays and the weekend as some sandwiches sell out. Pick up is via Bopple which we had issues with so Monica messaged them to order. As it is still not open for eating in there's an assembly line of four making sandwiches and a cashier. From 7:30am there are breakfast options from opening mostly revolving around egg sandwiches and tartines but 11am is when the sandwiches kick in.

Dipping my toe back into eating out involved going for takeaway sandwiches with Monica and then going back to my apartment to eat them because it was raining. All sandwiches can be added or subtracted with sauces or other toppings. They come on either paninis or baguettes and there's also one called the Mère Catherine named after the charming, eccentric restaurant that lasted for 45 years in that location before closing in 2019. 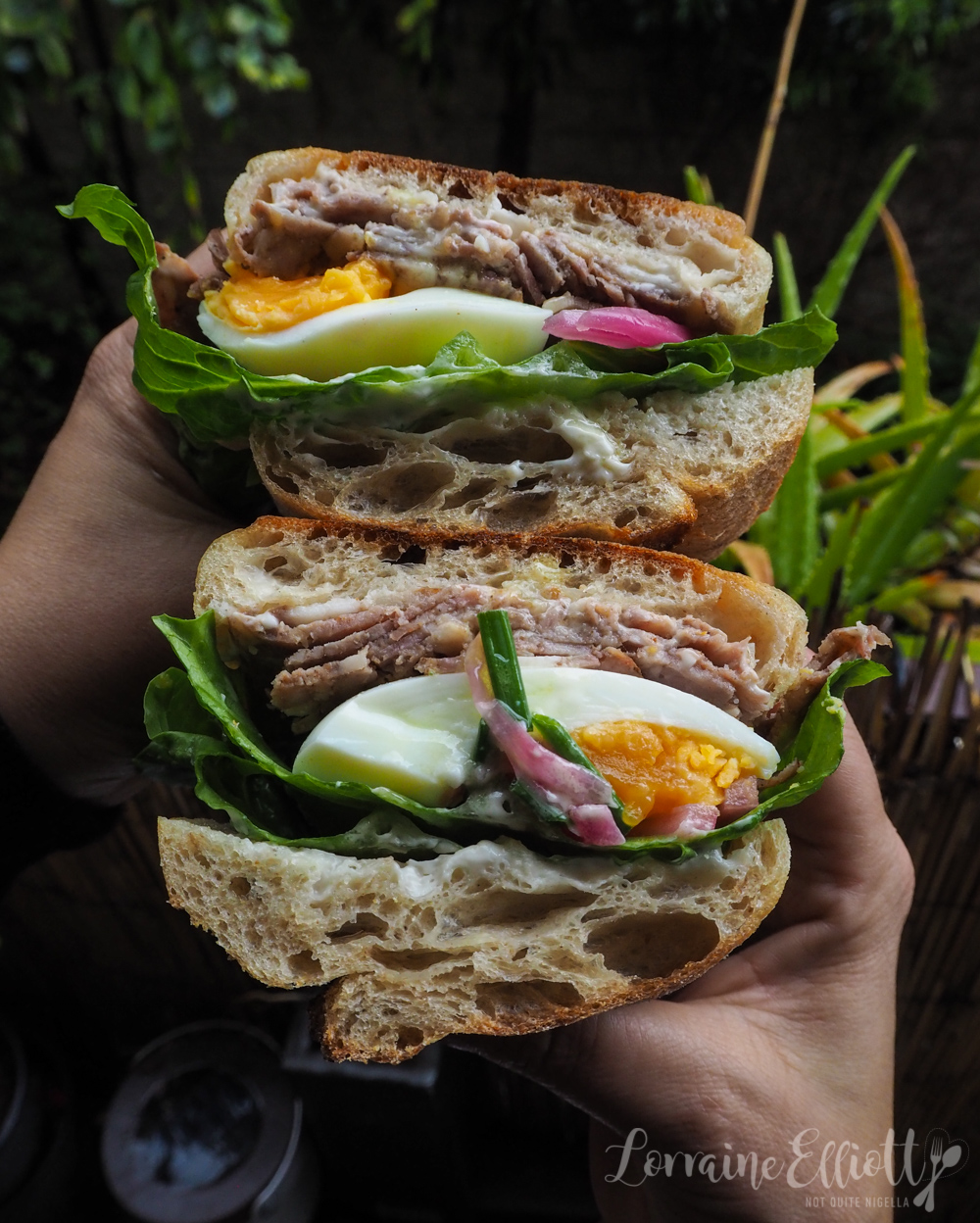 We try the weekly special for last week which is the Bogden with sliced Whole Beast Butchery hot smoked sausage, anchovy mayo, soft boiled egg, cos, chives, pickled red onions on a panini. This photogenic sandwich is filled with smoked sausage is strongly smoked and it's meaty and good although the sausage does tend to dominate over the rest of the sandwich fixing and I only get to taste the anchovy mayonnaise in a bite without the meat. 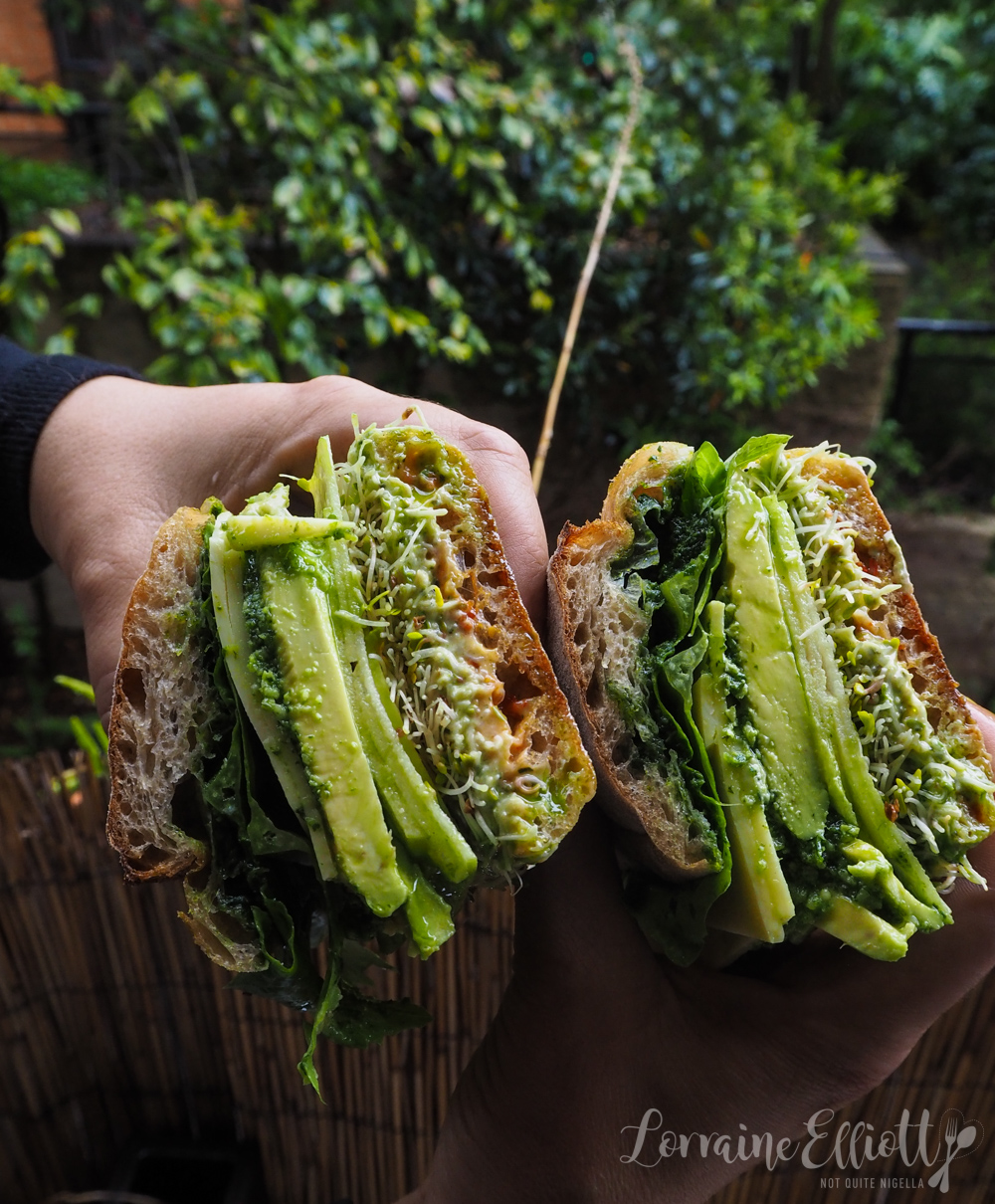 The most popular sandwich is the Al Green, a vegan sandwich that is as bright green as it is delicious. It has kale puree, avocado, iceberg, Granny Smith apple, alfalfa, pepita and vegan green goddess on a panini. The two surprising hits in this sandwich are the alfalfa and the thinly sliced Granny Smith apple Emily's tip is to add chilli sauce and cheddar cheese to the Al Green and I definitely agree. It's crunchy, soft, refreshing and so well balanced it's a pleasure to eat. 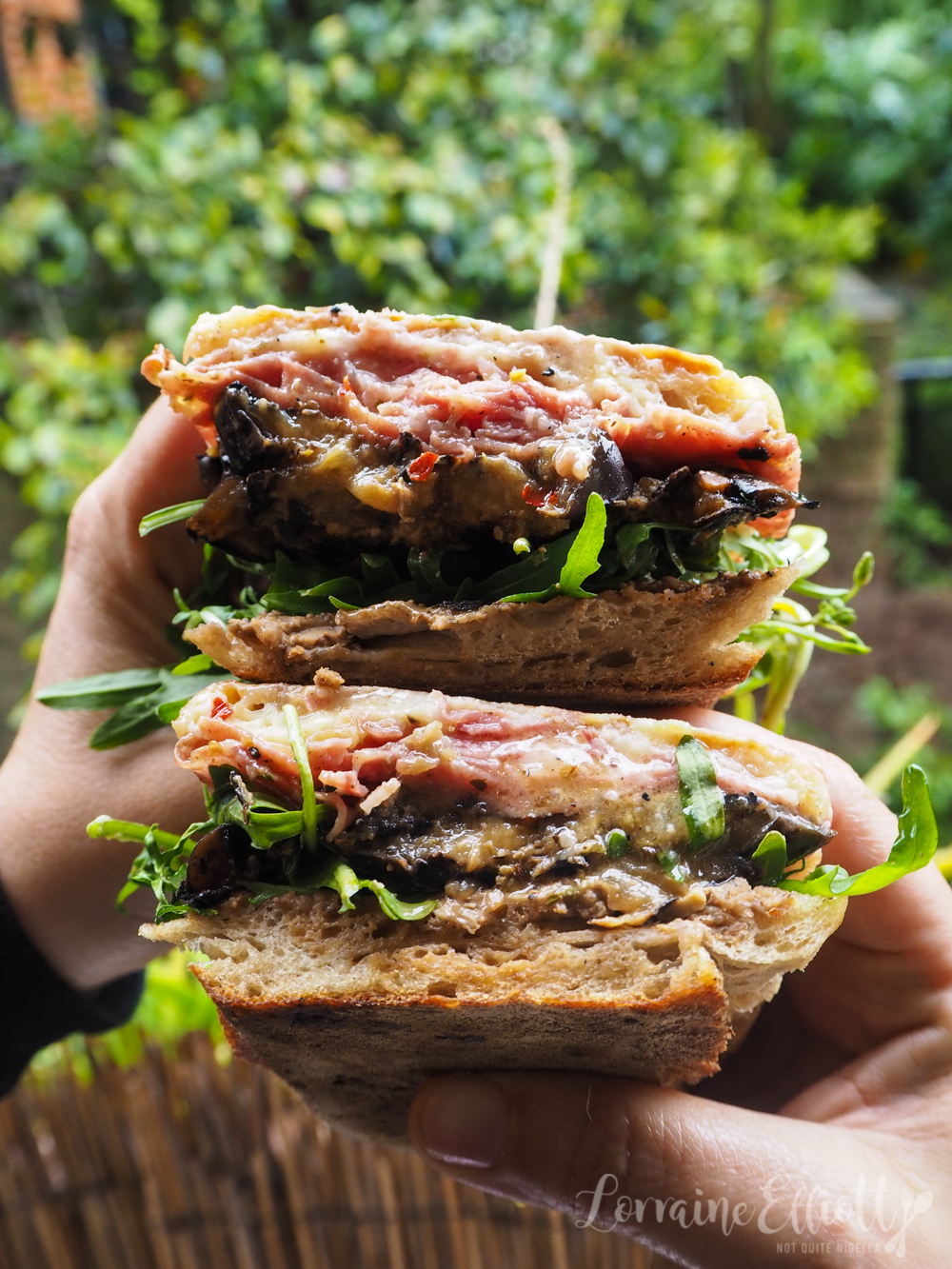 The Florence & the Aubergine panini has Finocchiona (fennel & garlic salami), eggplant, walnut paste, creamed pecorino cheese and rocket on a panini. I recommend getting this one toasted (you can get any toasted). It is luscious and it's hard to decide which I like more, this or the Al Green. I suggest getting both and splitting them with a friend so you get the luscious richness of this and the freshness of the Al Green for the best of both worlds.

So tell me Dear Reader, what is your favourite sandwich combination? Which do you like the sound of the best?