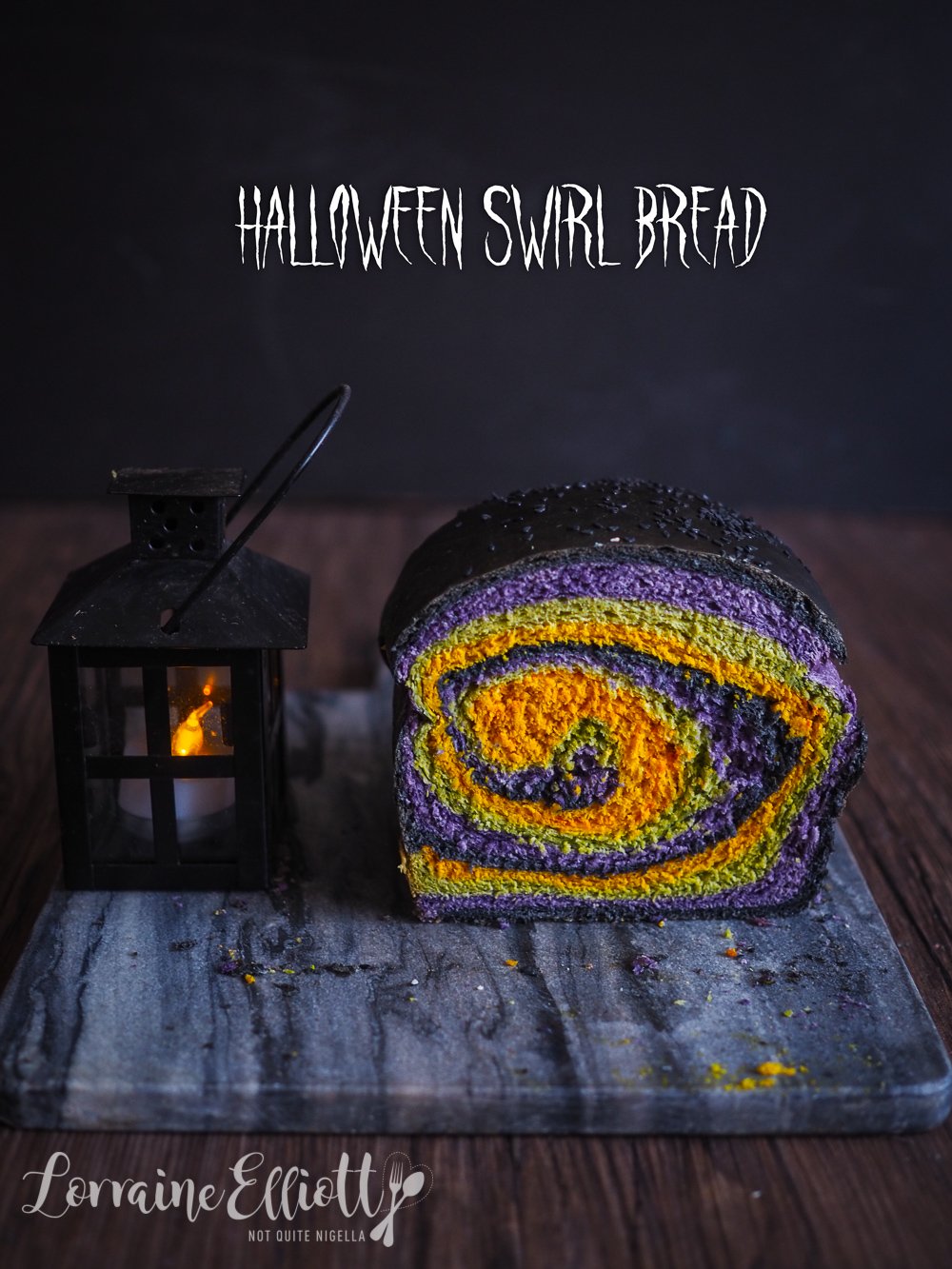 It's almost the season for Halloween and I've been busy baking things up in my cauldron my Dear Pretties! This Halloween swirl milk bread, with it's rather colourful and spooky shades, is made with vegetables, superfoods and natural food colouring!

This year I've gotten started a bit early on Hallowe'en. I really have to stop myself from getting into it mid year as it is always so exciting for me but I realise that talking Hallowe'en so early may peg me as a total weirdo. Not that I really care mind you. 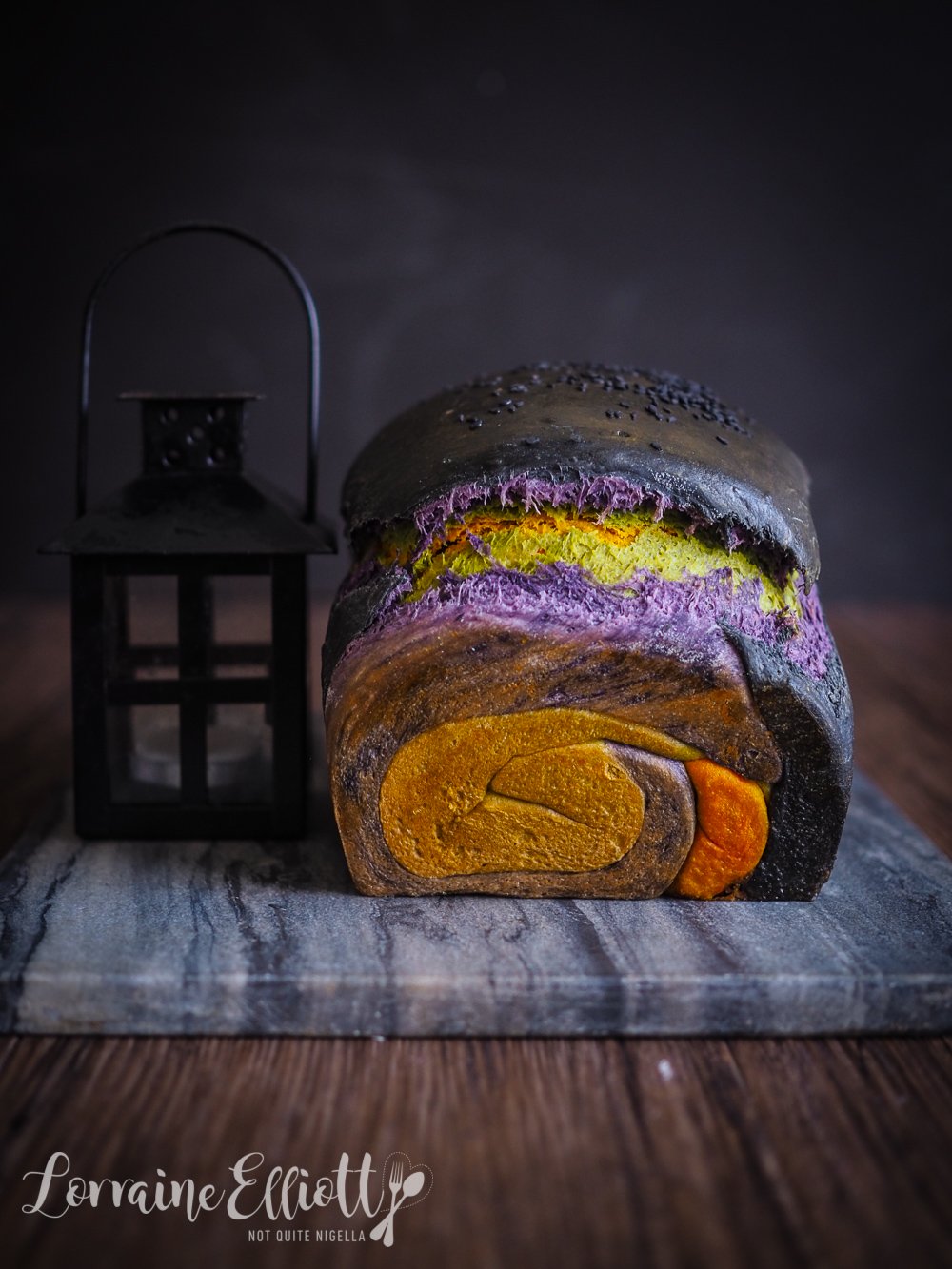 This bread came to me in a dream like many of my Hallowe'en ideas. I wanted to make a colourful bread in vivid Halloween colours but I also wanted to avoid artificial colourings-not that I don't use them in cakes etc but I wanted a challenge. I decided to use activated edible charcoal for black, turmeric for orange, matcha powder for green and pureed steamed ube or purple yam for purple. I divided the dough into four, hand kneaded the colours in and sat back and hoped. 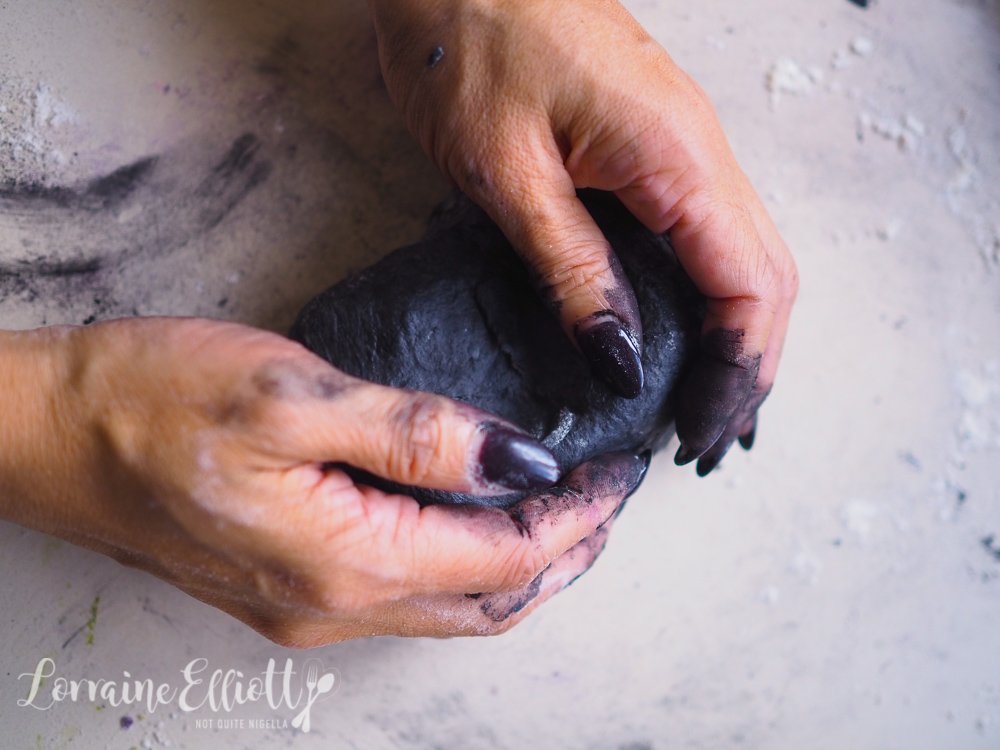 With the leftover charcoal I tried doing something that I had seen all over Instagram which was brushing my teeth with charcoal. I have somewhat of an obsession with having white teeth and I think my love of tea, matcha and red lipstick can often stain my teeth. I had seen lots of people brushing their teeth with charcoal so I decided to give it a go. 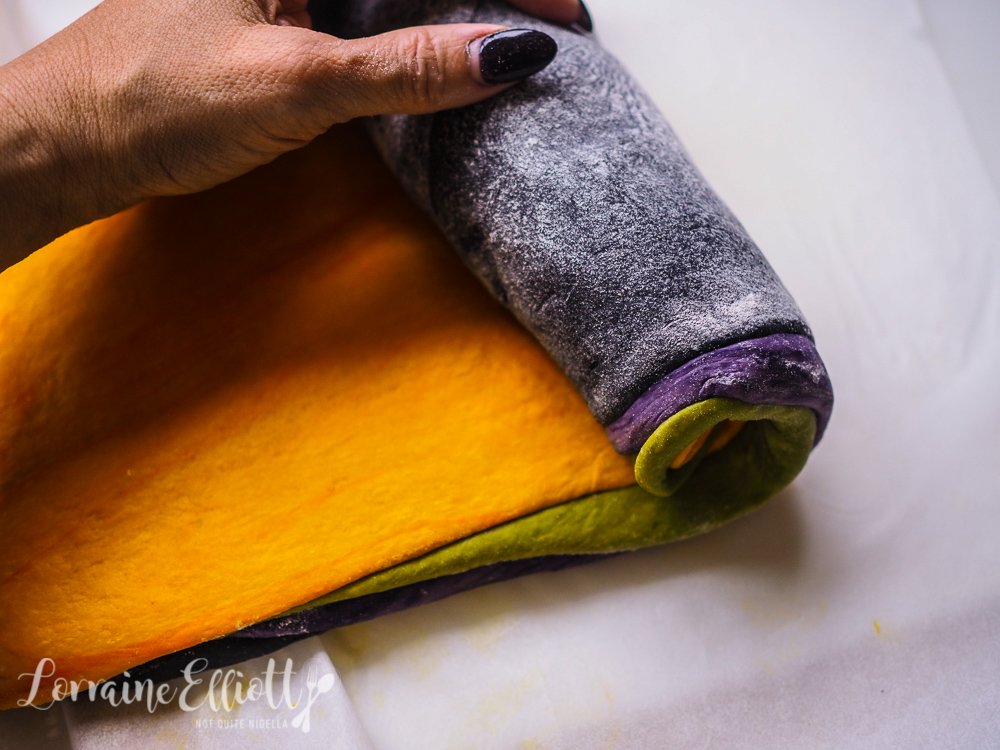 I found that if there are any benefits, they are outweighed by the negatives. Our white bathroom sink was splattered with black as was my top. Throughout the rest of the day I found black splashes down crevices and on my arm and I have to say that even afterwards I felt the need to brush with toothpaste. 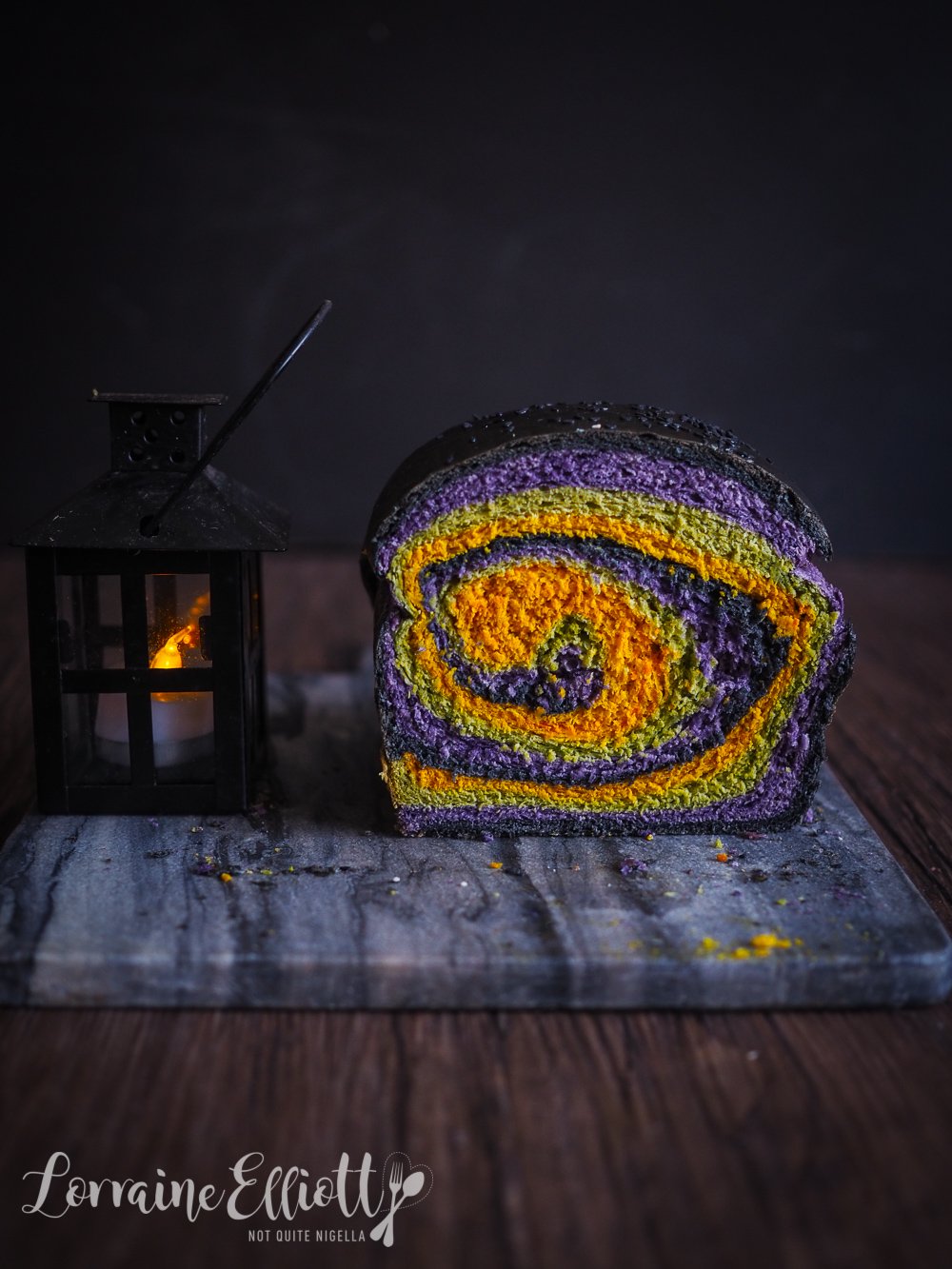 Having wiped down and cleaned the bathroom for a good while the timer went off for my bread and I took it out and cooled it. Then I sliced into the bread. It not only was bright, the flavours came through too. And Mr NQN paid my Halloween bread the ultimate compliment. "It looks like 'The Scream' in a bread form!" he said. Music to my elf ears Dear Reader...

So tell me Dear Reader, have you ever tried brushing your teeth with charcoal and how did you find it? And are you a Halloweenie? 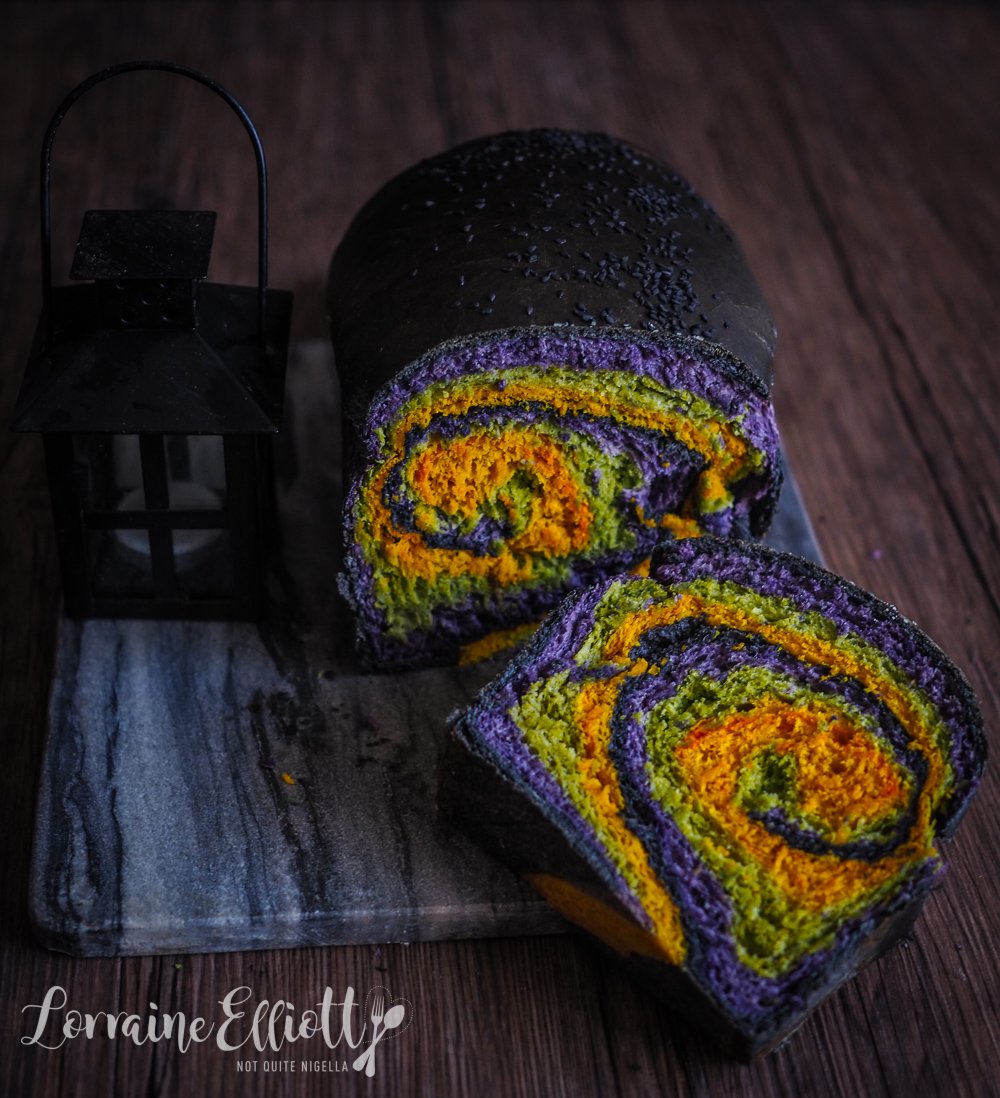 Step 1 - Make the tangzhong roux by heating the 1/6 cup of bread flour and water in a small saucepan on medium heat and whisk until smooth. Heat and when it gets to 65C/149F then whisk in the milk, butter, egg and salt. Set aside. 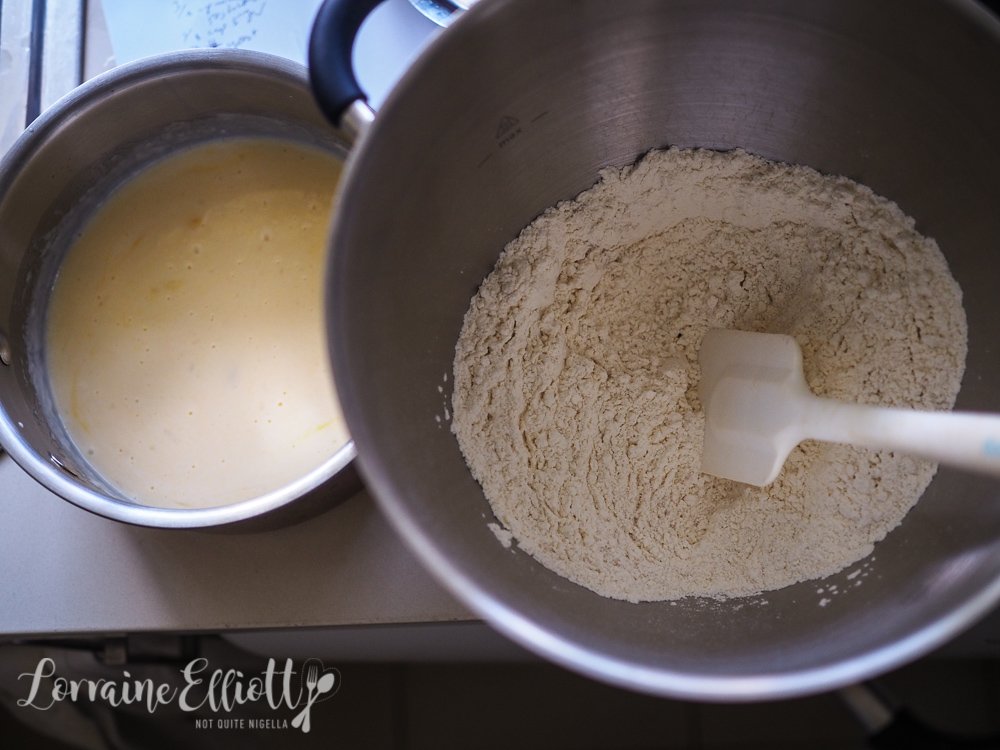 Step 2 - In an electric mixer bowl combine the flour, sugar and yeast with a spatula and then pour in the tangzhong roux and stir until combined. Then fit with a dough hook and knead on the lowest speed until you get a window pan effect-that is you can stretch the dough without it breaking (this should take over 10 minutes). 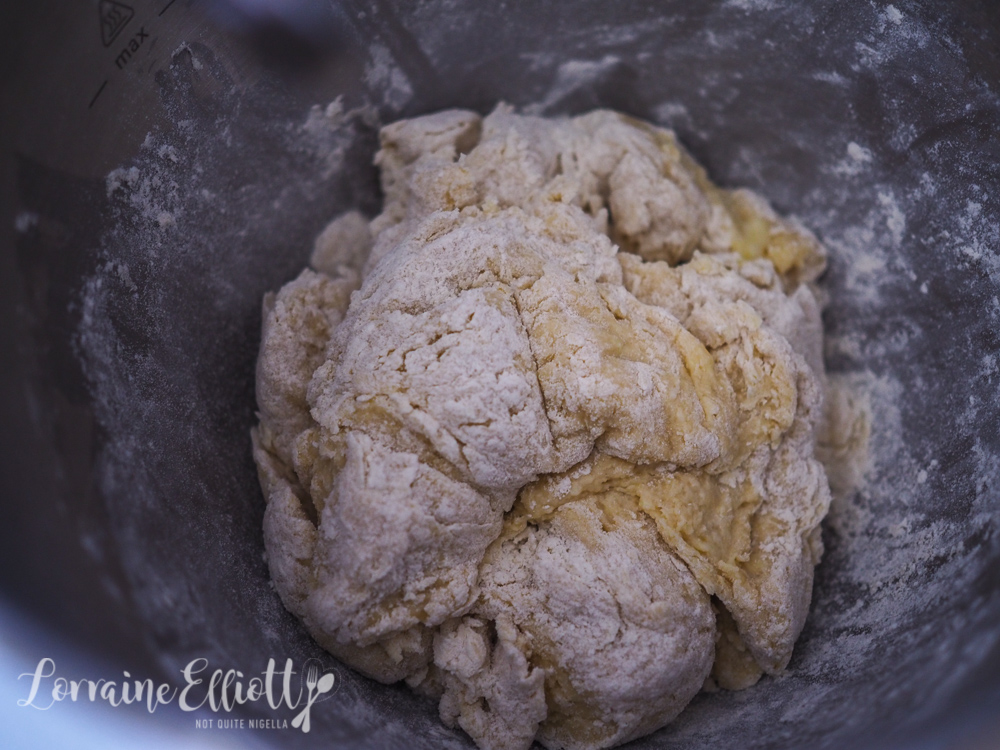 Step 3 - Weigh the dough and then divide it into four equal portions. Flour a surface and hand knead the colours into each dough portion. You shouldn't really need gloves except for the turmeric (I also roll the turmeric on parchment as it stains white surfaces). Roll into four balls and place in separate bowls and cover with cling film and allow to rise in a warm place until doubled in size. 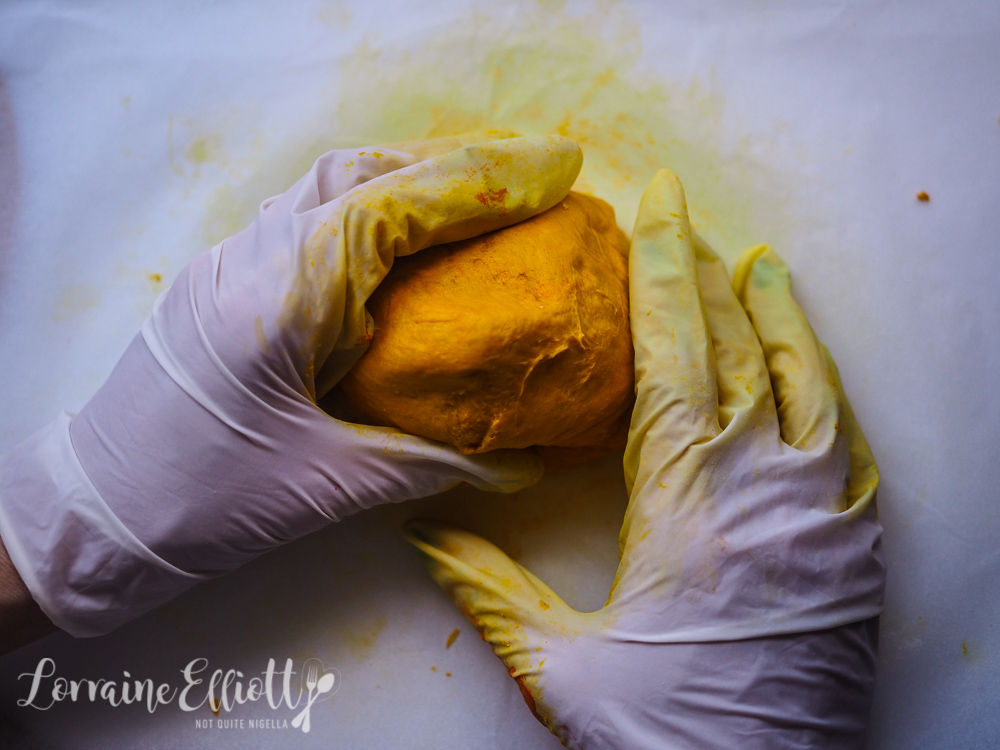 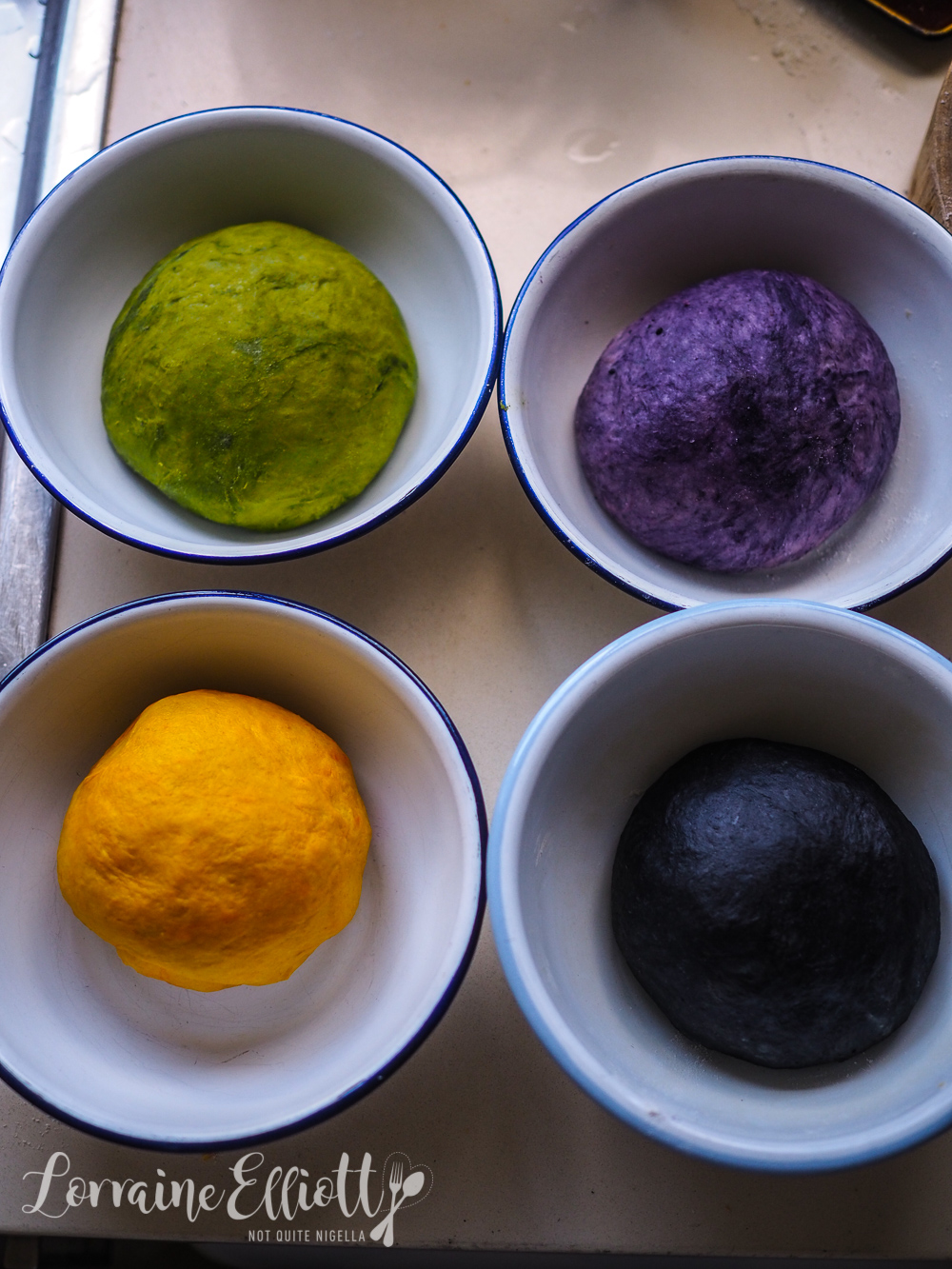 Step 4 - Oil a large loaf tin. Roll out the dough into four large (30x15cm or 12x6inch) rectangles one at a time. Place them on top of each other and roll out the stack of four a bit more to smush them (technical term ;)) against each other. 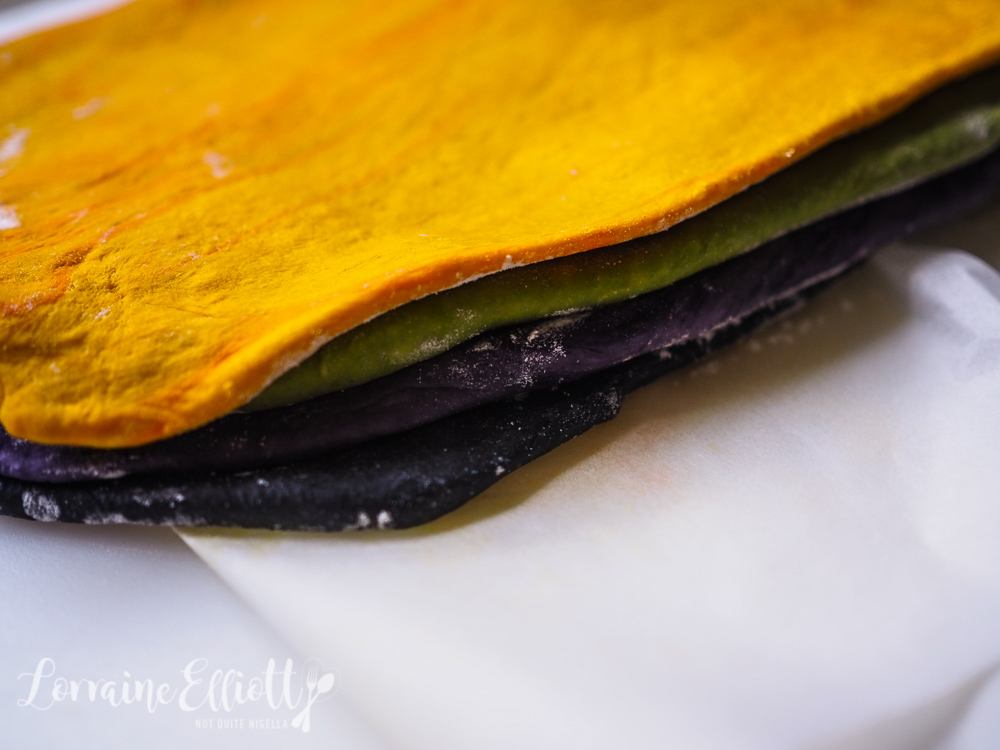 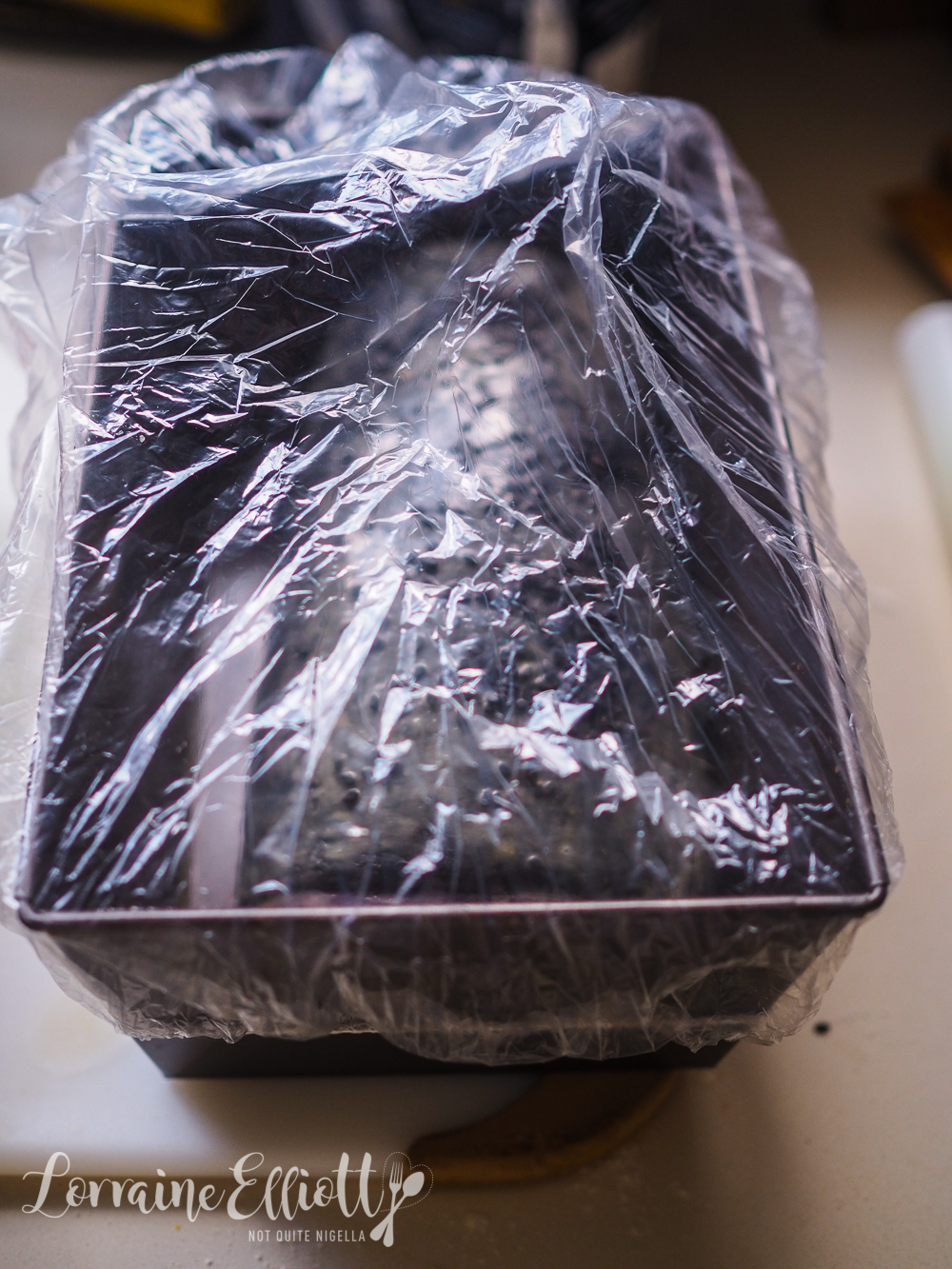 Step 5 - Roll the layered dough up and place in the prepared tin and brush with egg wash and sprinkle sesame seeds over it. Cover - I used a clean shower cap, a tip I picked up from my friend Sally. Allow to rise until doubled in size (around 20 minutes). Bake for 30-35 minutes. Cool in tin for 3-4 minutes, then remove and cool on a wire rack. Do not cut for an hour (it will be hard to resist). 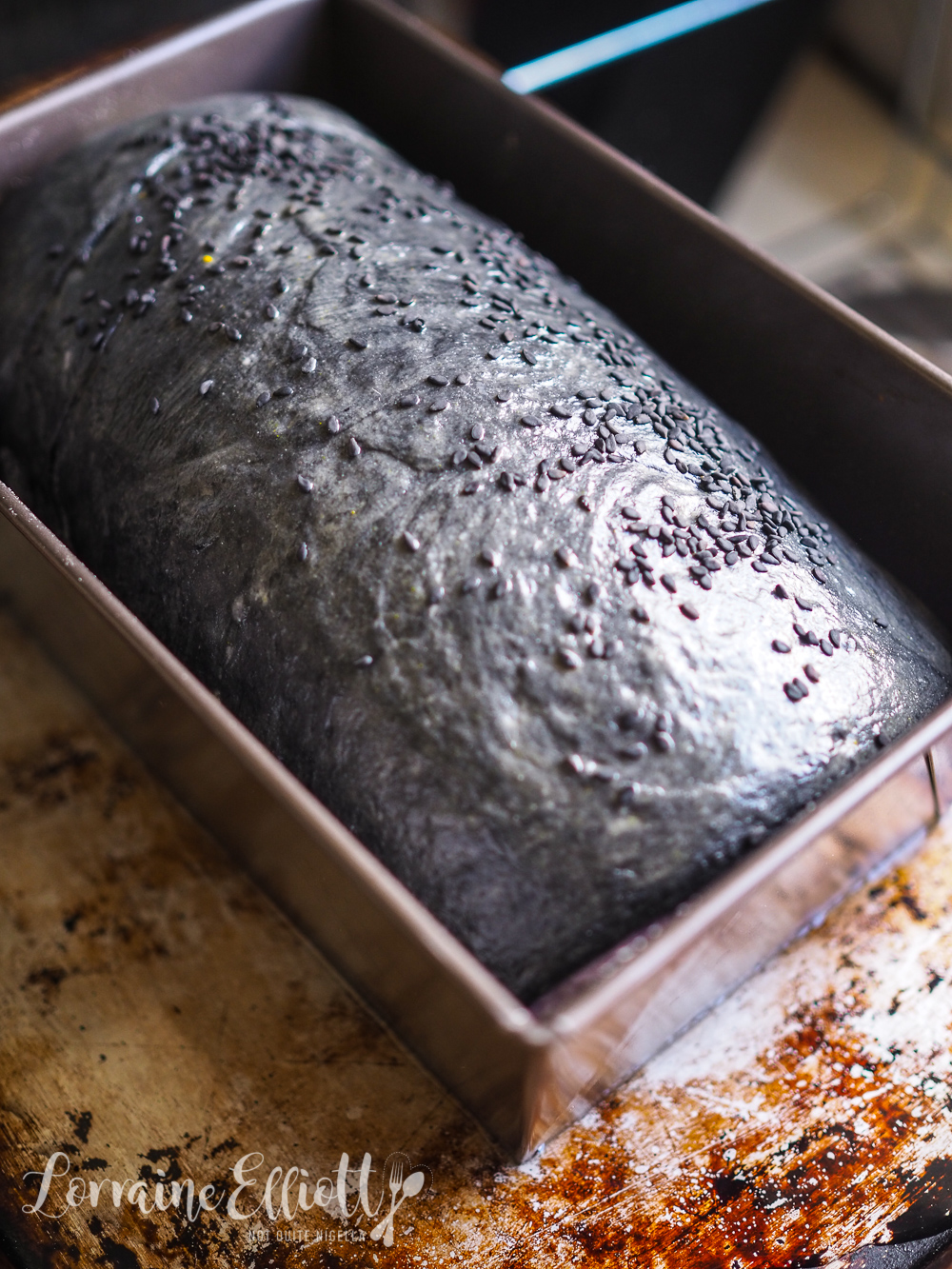 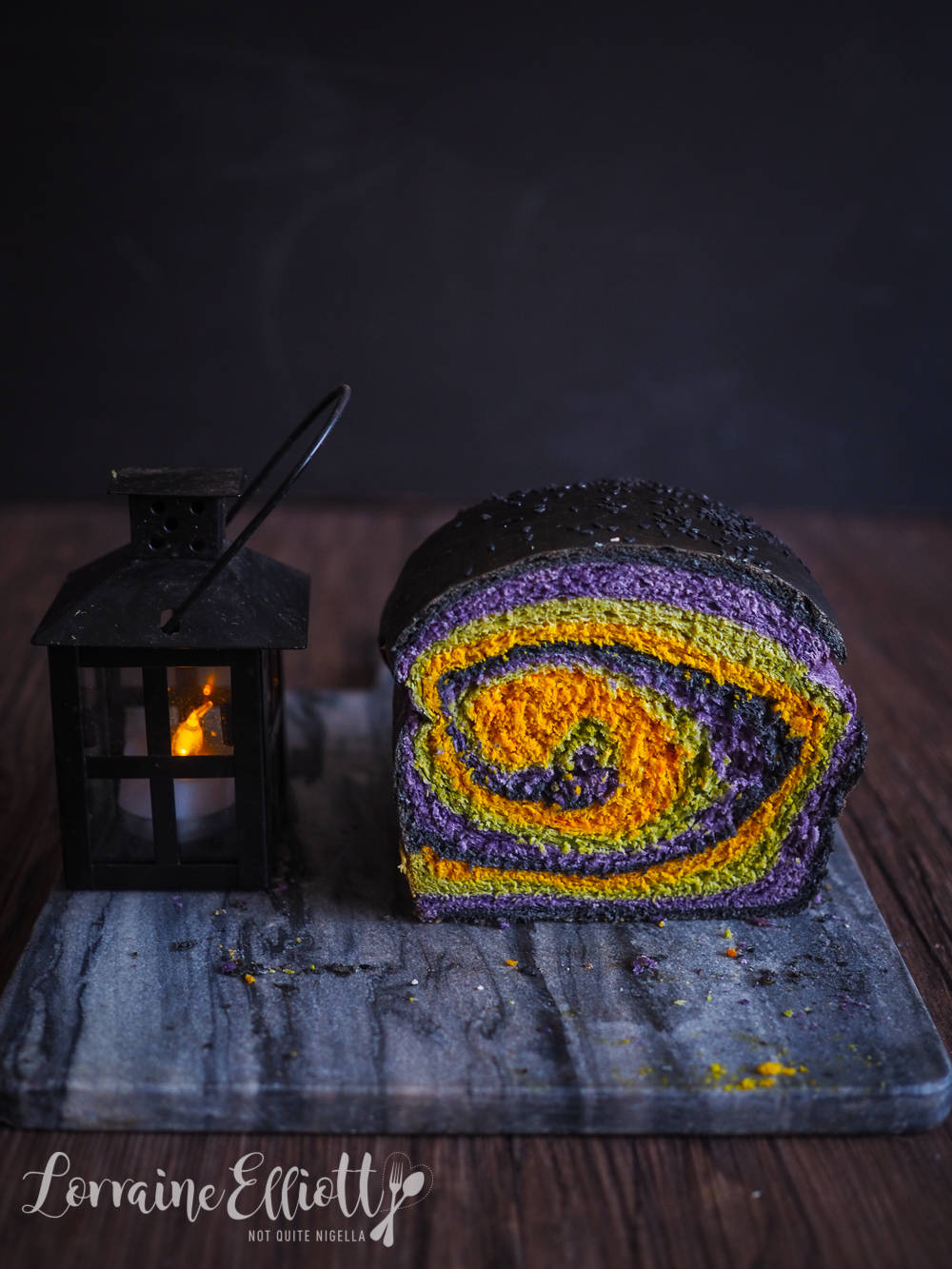