Growing up in Australia at 158cms I've never been tall. I've always sat on the bottom row of the school photos, and always needed to ask for help reaching the top supermarket shelves. I prefer the term petite to short. So it was a surprise to me when I lived in Japan a few years back that I could actually see the tops of people's heads. The heads were usually the oba-sans (middle aged matrons) or salarymen but I finally felt what it was like to be able to feel tall. I mentioned that this was only the middle aged people as the youth of Japan, particularly the men, are getting taller. I assume the wider and more varied and more Western influenced diet is responsible for this. 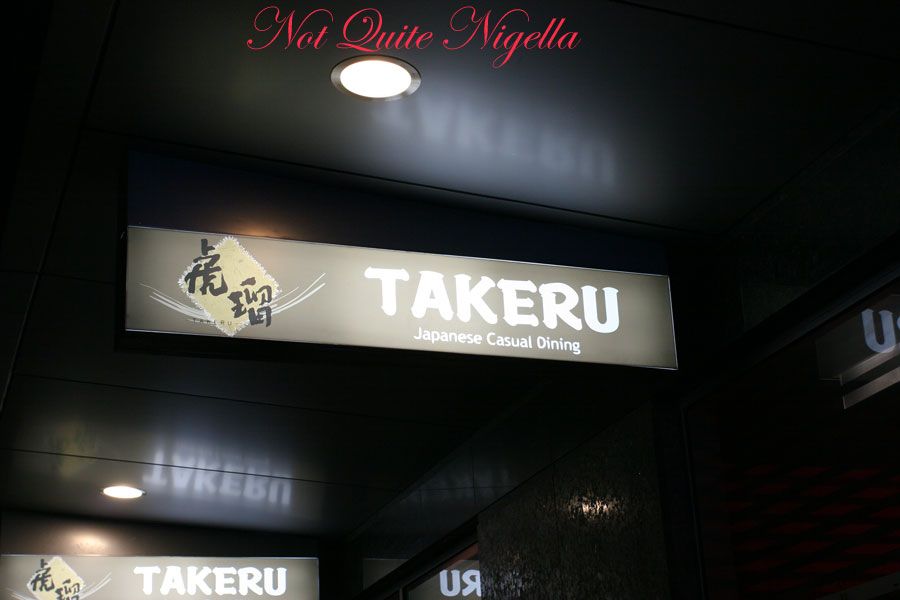 Visiting Takeru, a Japanese eatery that serves food that the younger Japanese eat out -western style pizza and pasta with a Japanese twist, with a lot of cheese just further emphasises the new Japanese diet. We're preparing for our holiday to Tokyo in June this year and this helps get us excited about it. And before you ask, this place has nothing to do with the Japanese world champion of hot dog eating, competitive eater Takeru Kobayashi ;) 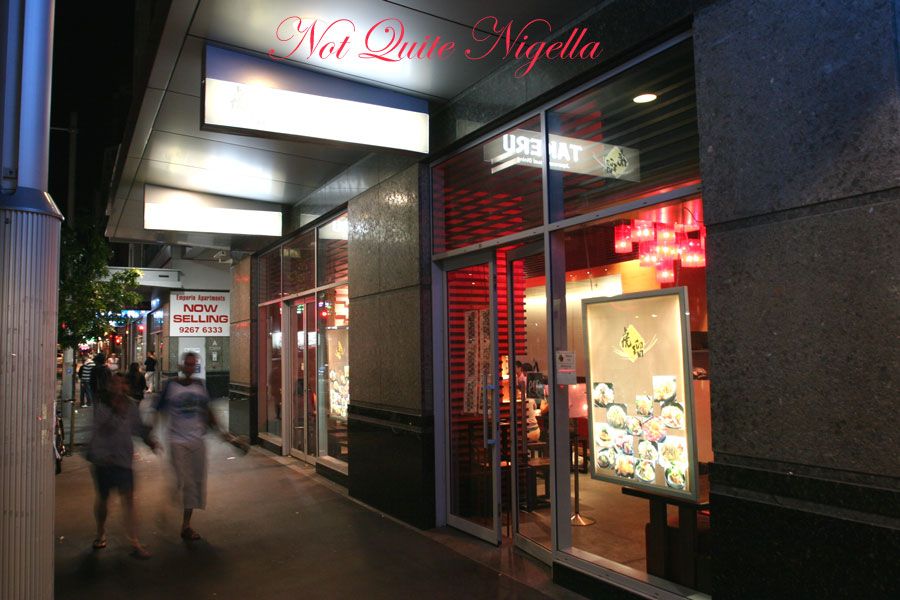 We're visiting on a Sunday night at 8.45pm and it's not too busy. They want us to share a table even though there are a few tables free, I suppose just in case there is an influx! I already know what I want to try-the Japanese style pizza and pasta which I miss so much. The pasta sauces include all of the usual suspects like squid ink, kinoko, scallops, clams, bolognaise and cod roe. There is also ramen and the usual Japanese ramen, katsu, meat and salmon dishes offered on the well worn menu. We select the Omochi curry gratin (rice cakes gratin with curry sauce) $6.20, wafu pizza with chicken and mochi rice cakes ($9.90) and Sake cream spaghetti with the Sake being salmon rather than the alcohol ($9.90). 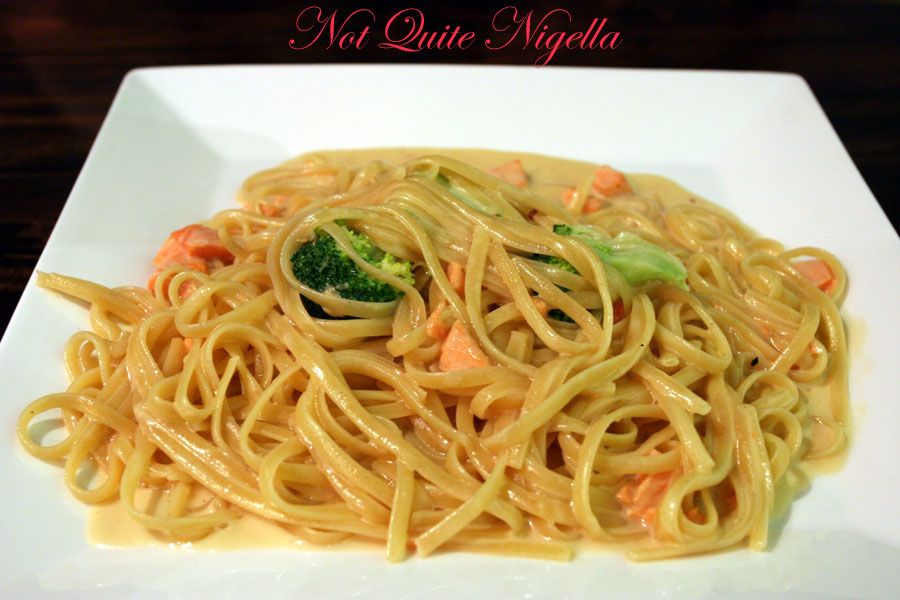 The pasta arrives first, and fairly quickly on a large square plate. It's linguine rather than spaghetti and has small chunks of salmon interspersed throughout the creamy sauce. It's good, the pasta well cooked and exactly like the cream sauce in Japan and the salmon chunks, at first looking a little few and far between are revealed under the linguine. And just like a Tokyo Izakaya table, it comes with optional parmesan and Tabasco sauce (Japan started me on my love of Tabasco). 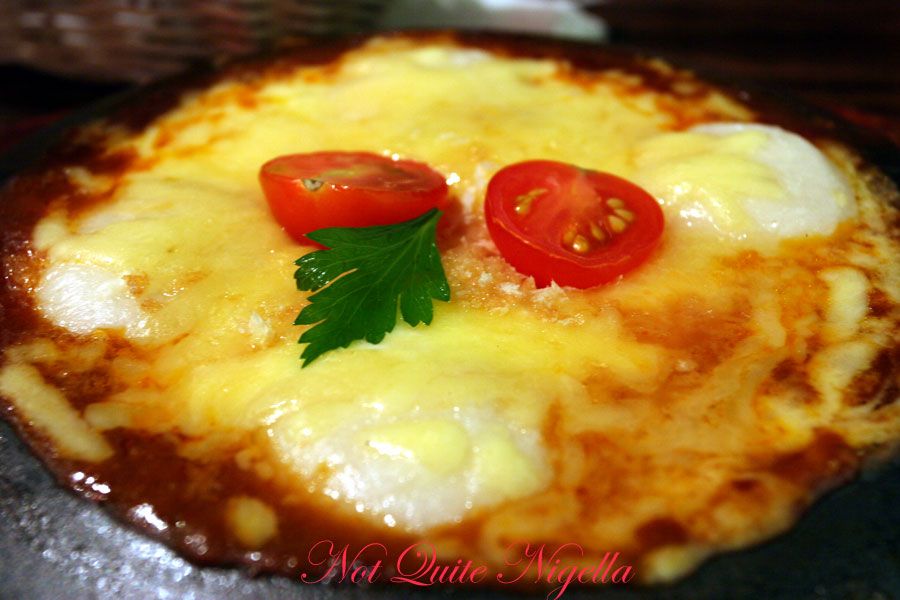 The Omochi curry gratin and the pizza arrive next together. The Omochi, set on a cast iron hot plate, are gorgeously stretchy underneath the curry sauce which at first seems too plentiful for the amount of mochi but when you stretch out the small discs, it's about right. The cheese gratin is plentiful and the curry sauce is authentically Japanese curry, that is the cubed variety that is fairly mild, not my favourite type of curry if I can be frank but authenticity is what I am after and it is very much like what I used to have in Tokyo. 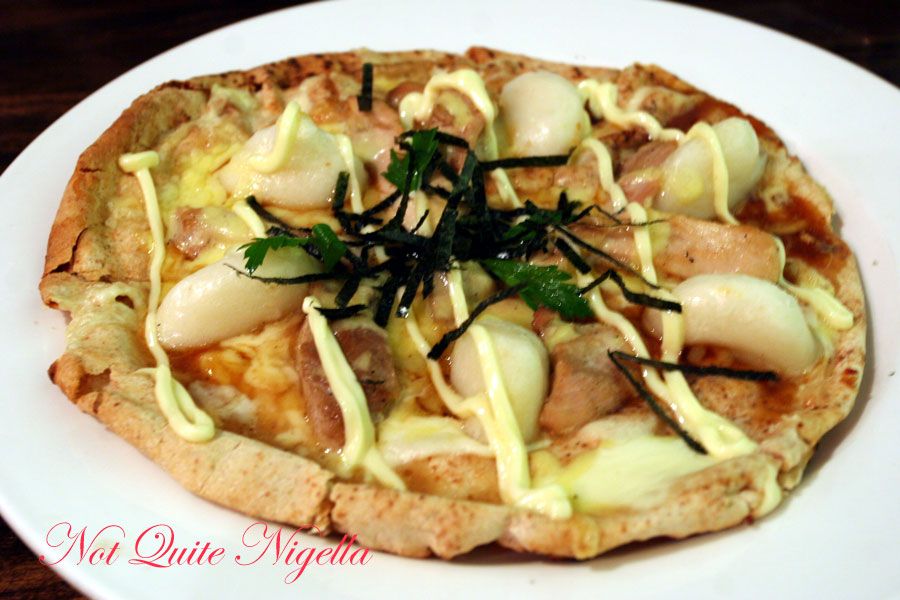 The pizza is sampled next. It's on a round of Lebanese bread which is a little disappointing. Don't get me wrong, I've made pizza at home for a quick snack on Lebanese bread but I was hoping for real pizza dough. The topping, a combination of tender, melt in the mouth chicken which is absolutely delicious, halved stretchy mochi rice balls and a tangy sauce which is all doused in a liberal splattering of mayo is delicious, if impossible to eat. The fabulous sauce, which is a little too plentiful for the thin base slides down hands and onto chins while eating. Overall, it's not quite like Japanese pizzas that I've tried but it's still quirky and unusual enough for me to want to finish half of it.

We feel full to bursting after this cheese and dairy fest. Oh did I forget to mention that the Japanese youth, aside from being taller are also a little rounder than their previous generation? ;)