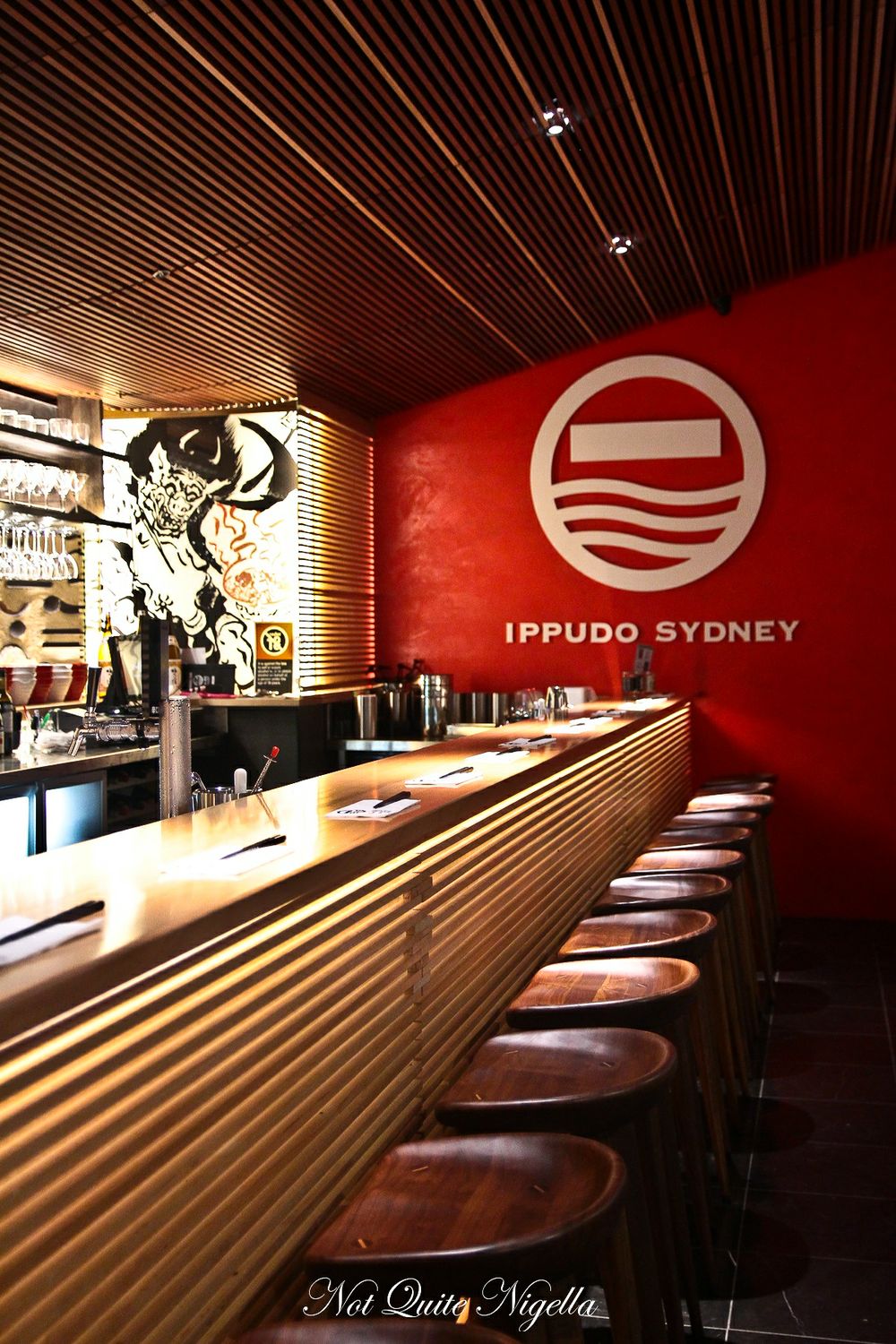 There were only two things that I was thinking of on a Sydney Saturday afternoon when I looked outside the shop in which I stood and saw the torrents of rain falling down: ramen and soft pork buns. So when Mr NQN came to pick me up, I wasn't worried about my shoes getting wet from the run from the shop to the car. I was thinking that it was just about the perfect time and weather for us to head towards Ippudo, the famous Japanese chain of ramen restaurants that has sent the blogosphere into quite a spin.

Ippudo which means "one wind shrine", started in 1985. They make Hakata style ramen which is a style of thinner ramen originating in Hakata city in Japan. Made thinner than other ramen so that it would cook faster in order to feed the fisherman patrons, it is also served in a thick tonkotsu broth made by boiling pork bones for twelve hours to extract all of the flavour and goodness from them. 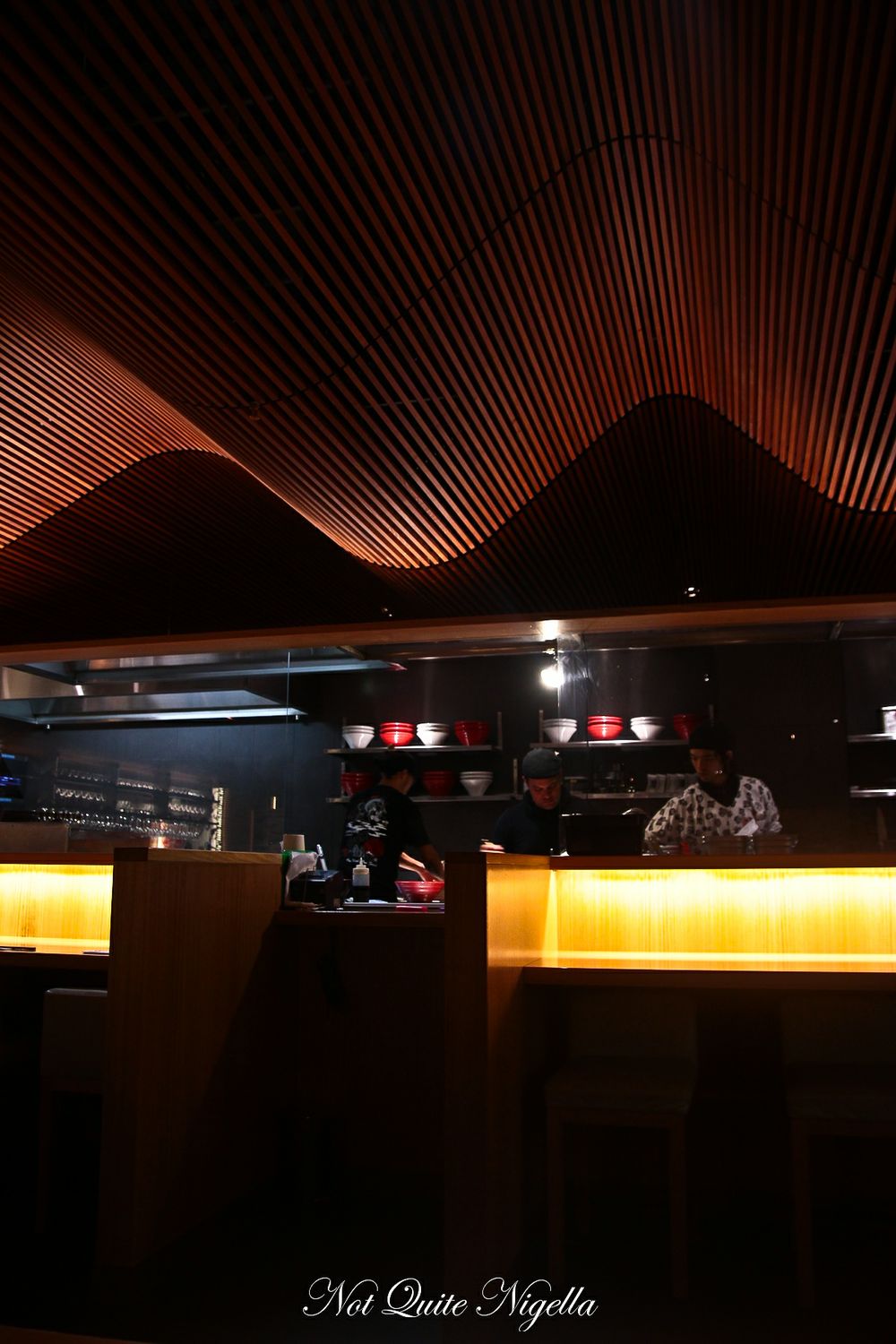 The flavour of Ippudo's tonkotsu broth changes every few months and there is a difference between the broths between cities, changed to suit the customer palate through feedback. For example, the tonkotsu broth in Sydney's branch is said to be saltier, creamier and richer than in New York. The original ramen was the Shiro Maru (shiro meaning white, maru meaning bowl) and this was followed about ten years later with the modern take on it called the Aka Maru (red bowl) which is bolder on flavours with a fragrant black garlic oil.

The Ippudos in Japan are different from those outside Japan. For example, the soft steamed pork buns aren't sold in Japan and it is more of a faster eating experience there while overseas, people tend to linger. The owner Shigemi Kawahara wanted to create a ramen place where women would feel welcome and the interior is actually very nice indeed with a wave and wind like pattern echoing through the design from the rippled wooden ceiling and the wind dragon imagery. Regulars at the New York branch include Anne Hathaway, Martha Stewart, Sarah Jessica Parker and Jessica Alba according to the Sydney restaurant manager Andrew who is originally from the New York branch. Lines at the New York branch are reportedly up to three hours long. 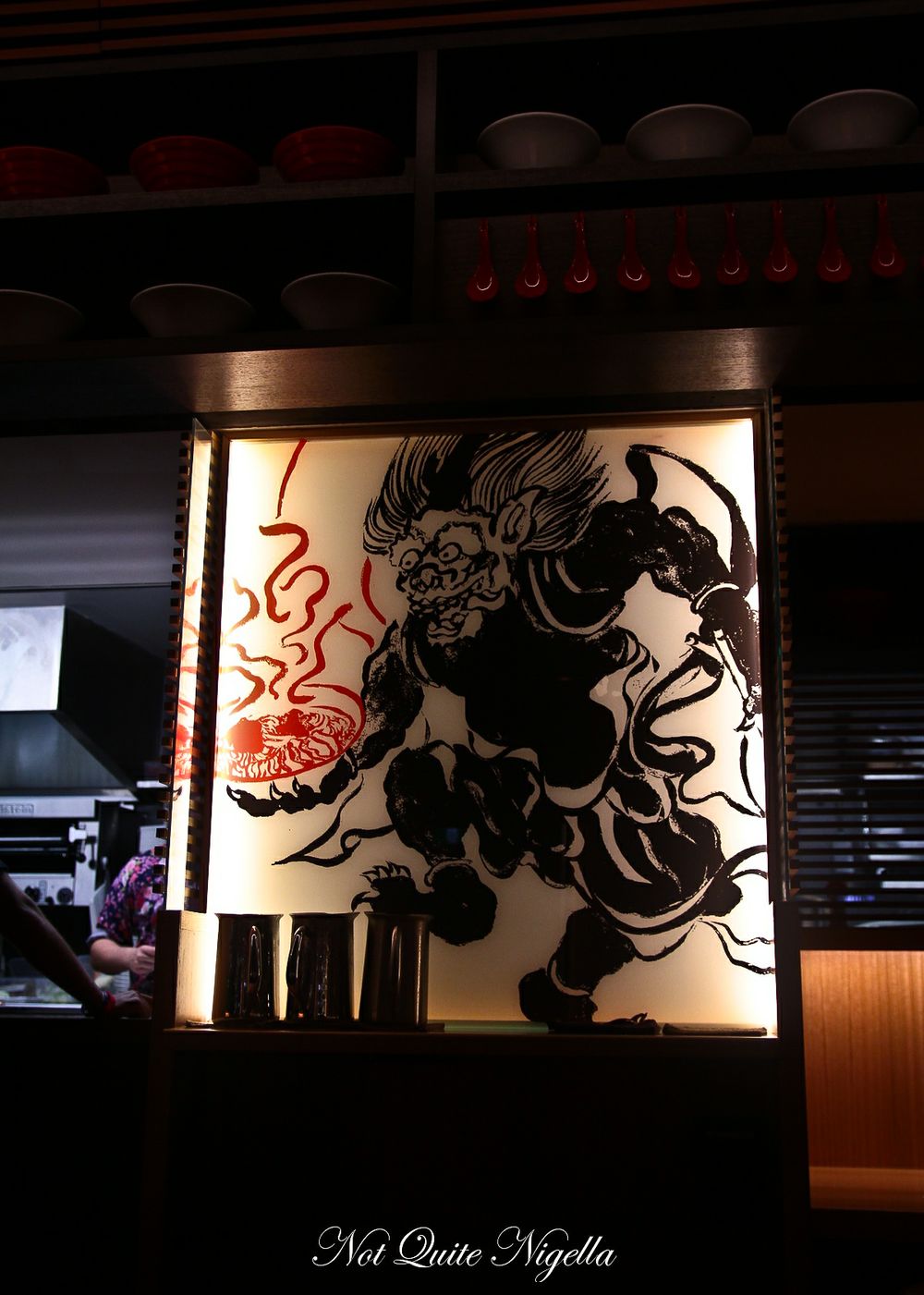 The Sydney branch on the fifth floor of the Westfields food court is the first Ippudo in Australia and the 12th overseas shop. There are around 75 seats in total including a bar area at the front. All of the tonkotsu stock is made off site as is the ramen. A Japanese ramen master and his team of 10-15 staff produces enough fresh ramen to sell 600-700 bowls of ramen a day.

Queues and a no reservations policy had originally put us off dining with friends - Mr NQN hates to queue and so it was late afternoon when neither of us had eaten much the whole day that we headed to Ippudo. It turns out just before 5pm is the ideal time to dine if your stomach is predisposed to that sort of early dining. At this time, there is no queue at all and there is actually a separate dinner menu which starts at 5pm. This has quite a few additional offerings to the lunch time menu which is more concise with mostly ramen and a few sides like the famous pork belly buns and other small starters. The dinner menu has range of wagyu steaks, salmon, some modern Japanese creations and three desserts, some designed just for Australia including a green tea lamington and an ice cream parfait called The Blue Mountains. 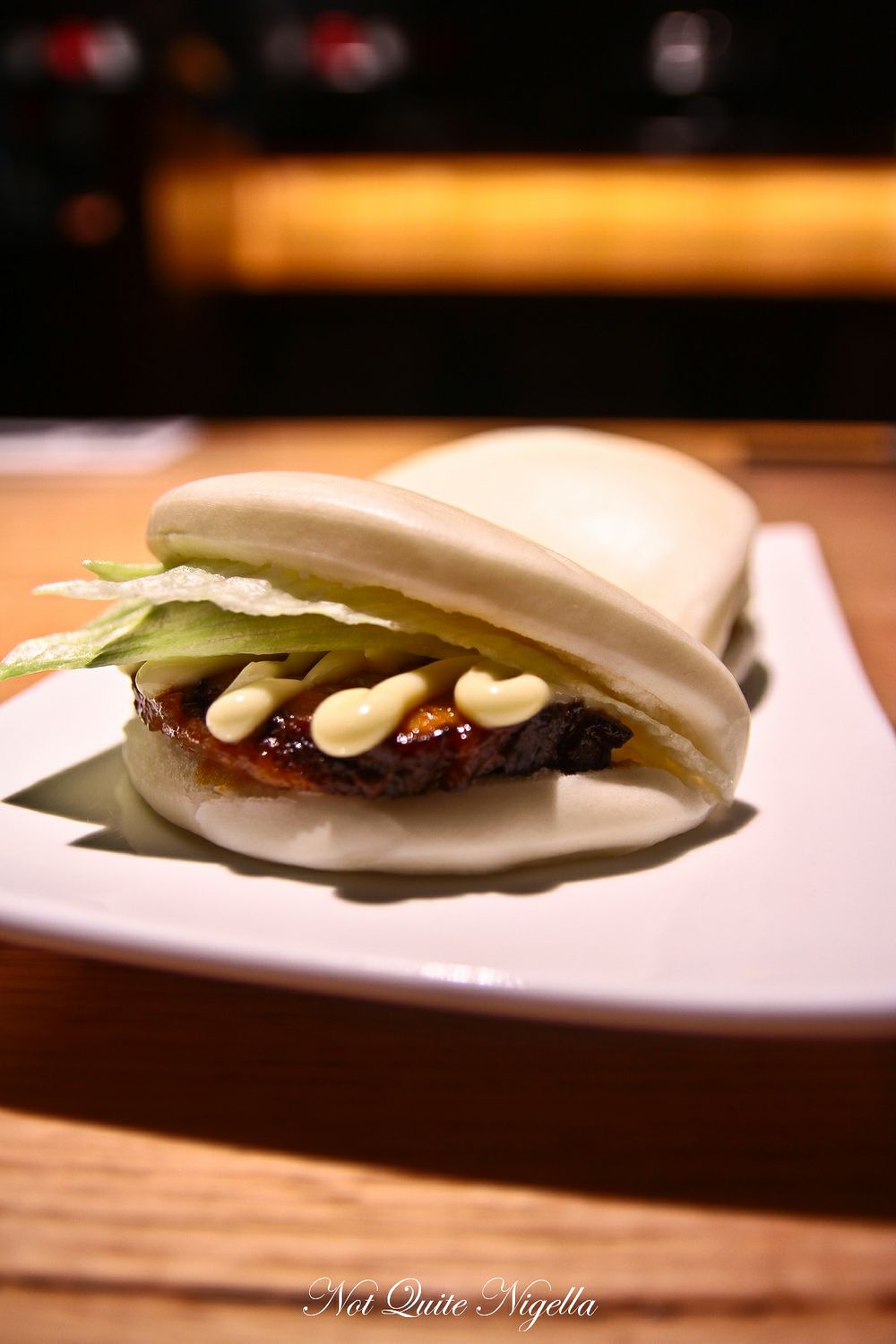 We had to start with the buns-that was a no brainer really. Softer as a down pillow, the folded over steamed buns are filled with Japanese mayonnaise, a small crisp piece of iceberg lettuce and a single slice of sweet, soft pork belly. Mr NQN proclaims that he could easily eat ten. I eat mine slowly, savouring the bites. 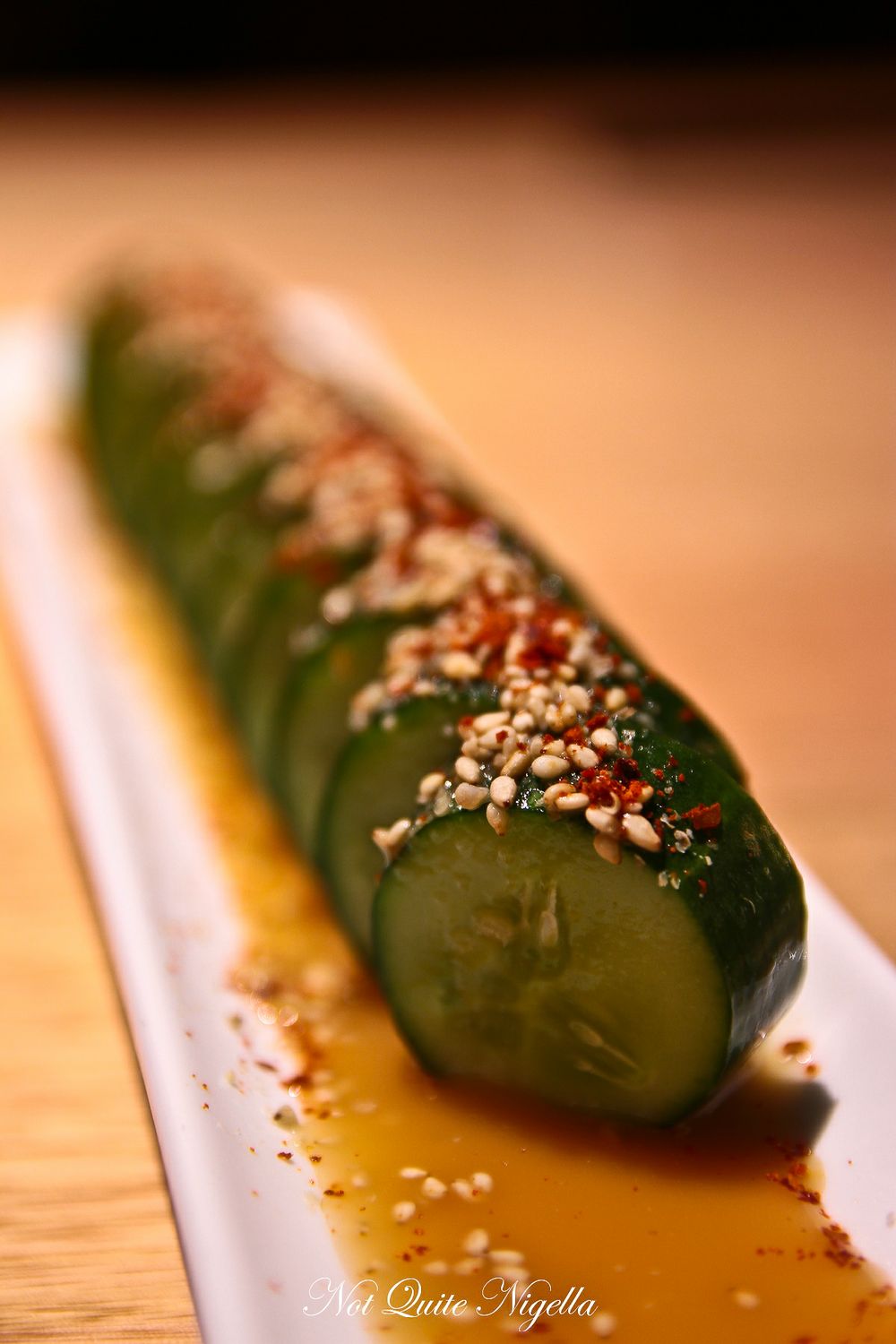 A perfect snack for beer or something refreshing to eat while waiting for your ramen (not that there is a long wait), is the Goma Q or the sliced cucumber, fresh and served with a sesame and garlic based sauce with sesame seeds and chilli powder on top. It's crisp and refreshing but I must admit, all I wanted was another pork bun! 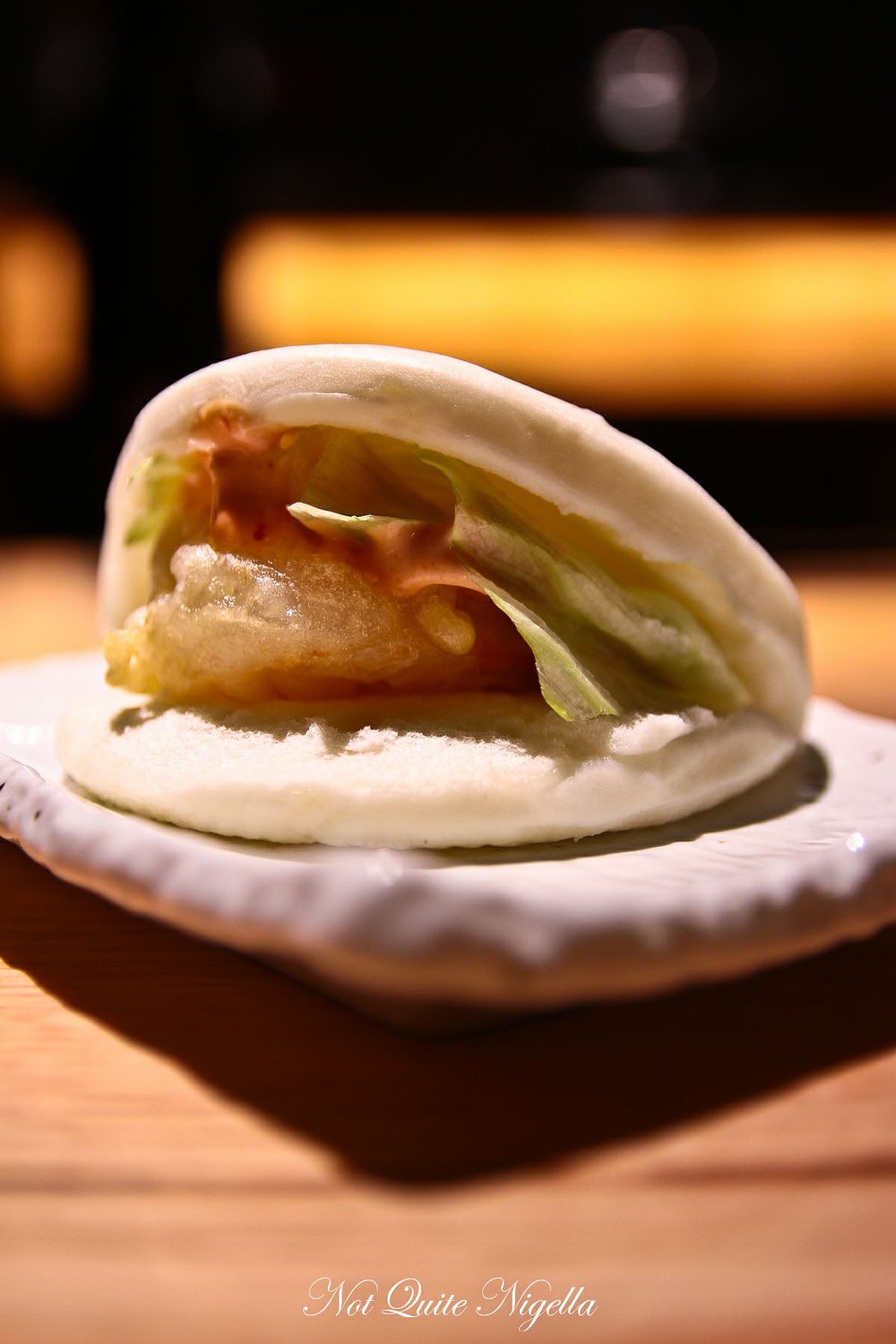 Another option for bun lovers is the shrimp bun, where a large battered prawn is wedged in the soft bun with mayonnaise and lettuce. And whilst it's good, the pork bun is still the pick of the two.

Ramen time! With the ramen itself, you can get several levels of doneness from soft to fresh (fresh is when it is just briefly dunked in the water and is not recommended). There are also firmer levels like kata (hard), bari kata (very hard) and harigane (hard as wire). I don't like soft ramen preferring it firm and springy so we opt for a bari kata and a harigane ramen type. Also, they have an option called kae dama where you can get an extra serve of just the ramen to add to the broth. It's not something that you would order straight away but when you have a few spoonfuls of ramen to go, you signal to the wait staff that you want this extra serve and it is made to order and carried over so that you can make the most of the last of the stock. 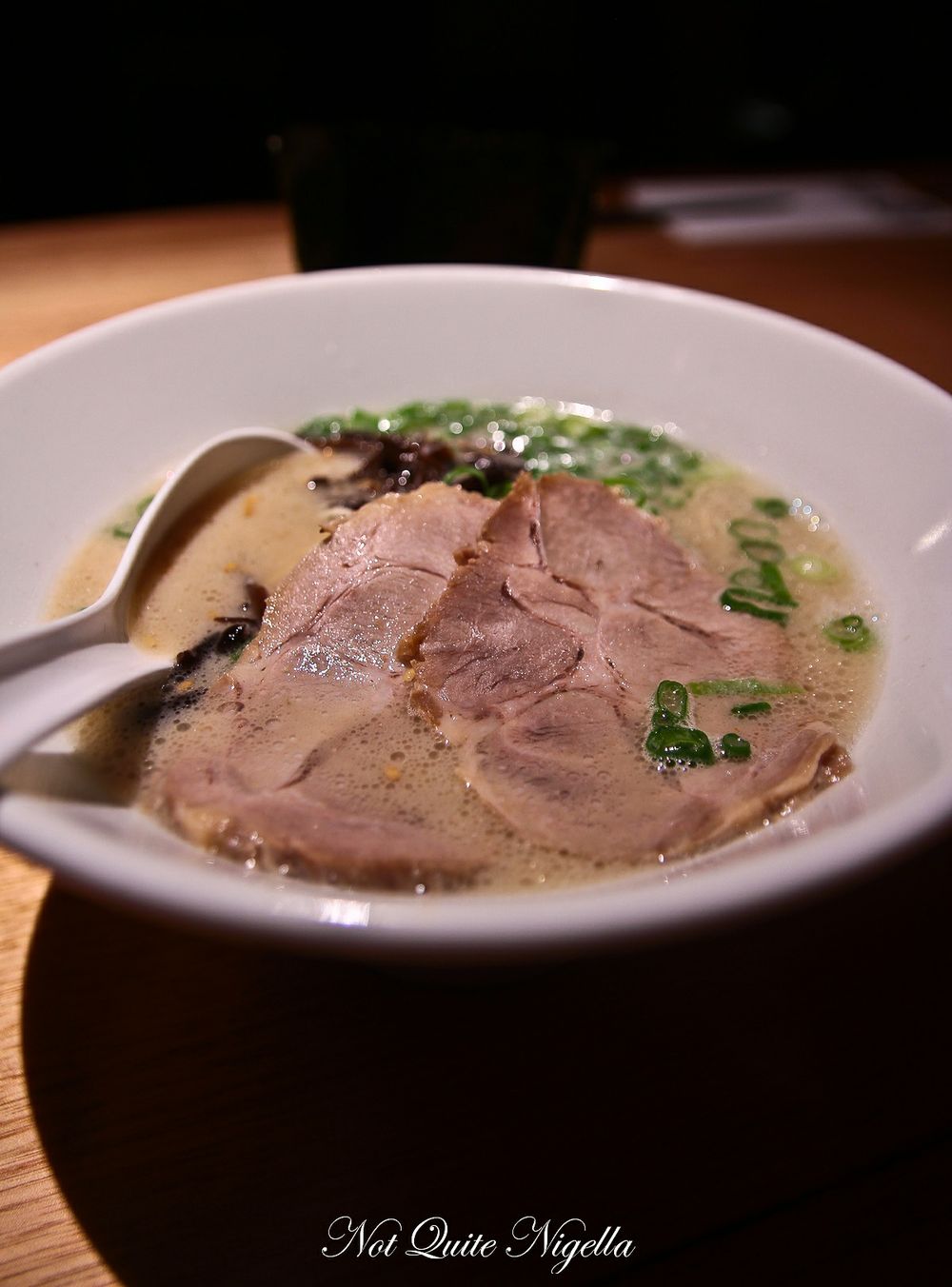 The shiro maru comes out and we notice that the spoon is quite a bit deeper allowing us to pick up more soup and ramen. The soup is thick but not gluggy and served piping hot and has a really smooth, creamy flavour to it. The ramen noodles are actually quite a bit thinner than I've ever had and they're delicate but still nice and springy and not soft at all. The cabbage gives it a nice contrasting crunch as does the mushrooms and we also ordered a side of nori seaweed sheets that we submerge into the broth. 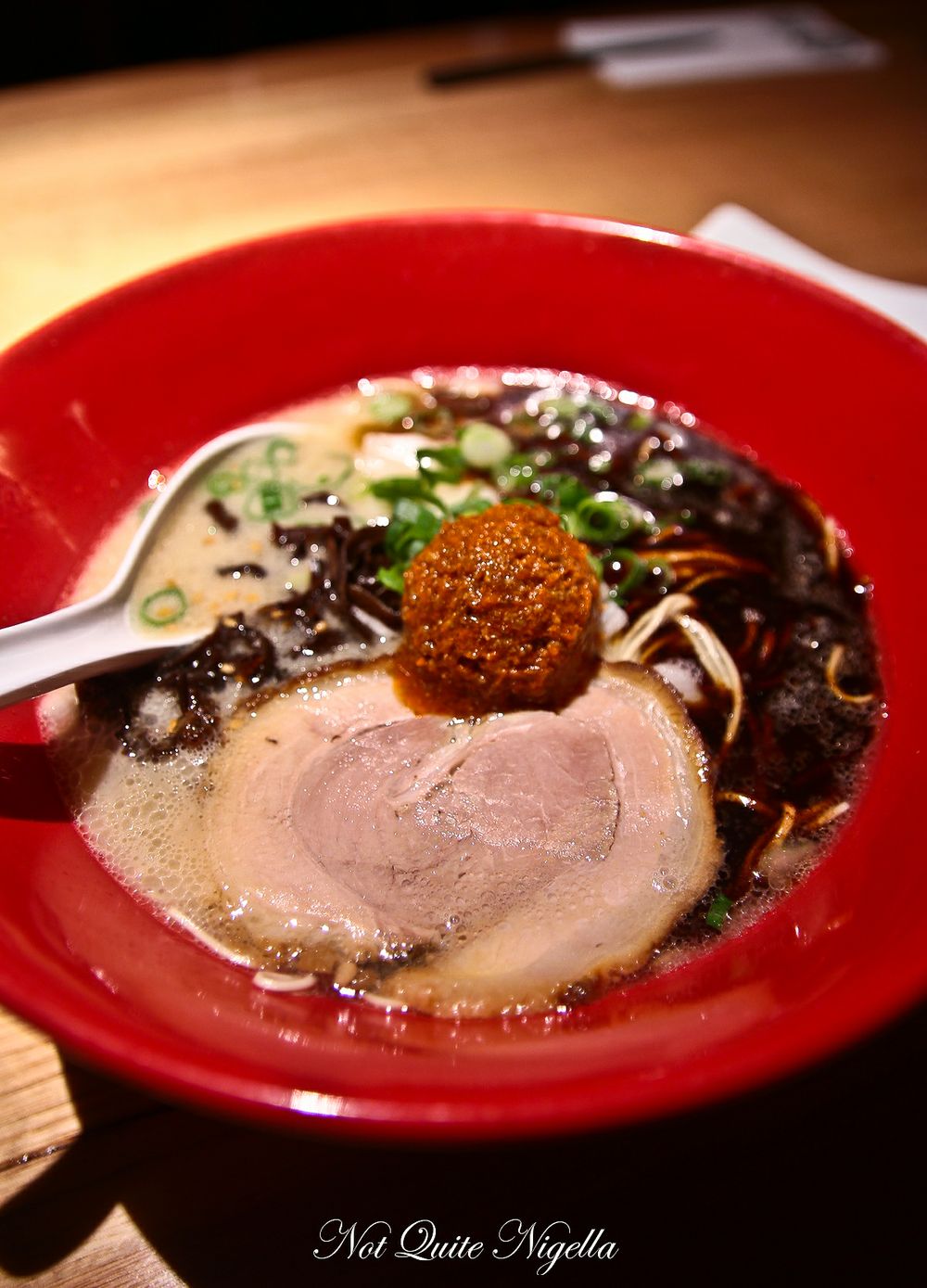 The Aka Maru comes out second, it's the one with the firmest harigane ramen in it. I try some of the ramen expecting something quite firm but it's quite similar to the other one with just a tiny bit of added firmness to it. The top of the soup is divided into the white tonkotsu and the other half is the black garlic oil that sits on top. The red fireball in the centre is a ball of miso and paprika which adds so much to it and it is recommended that you swirl this through the soup. 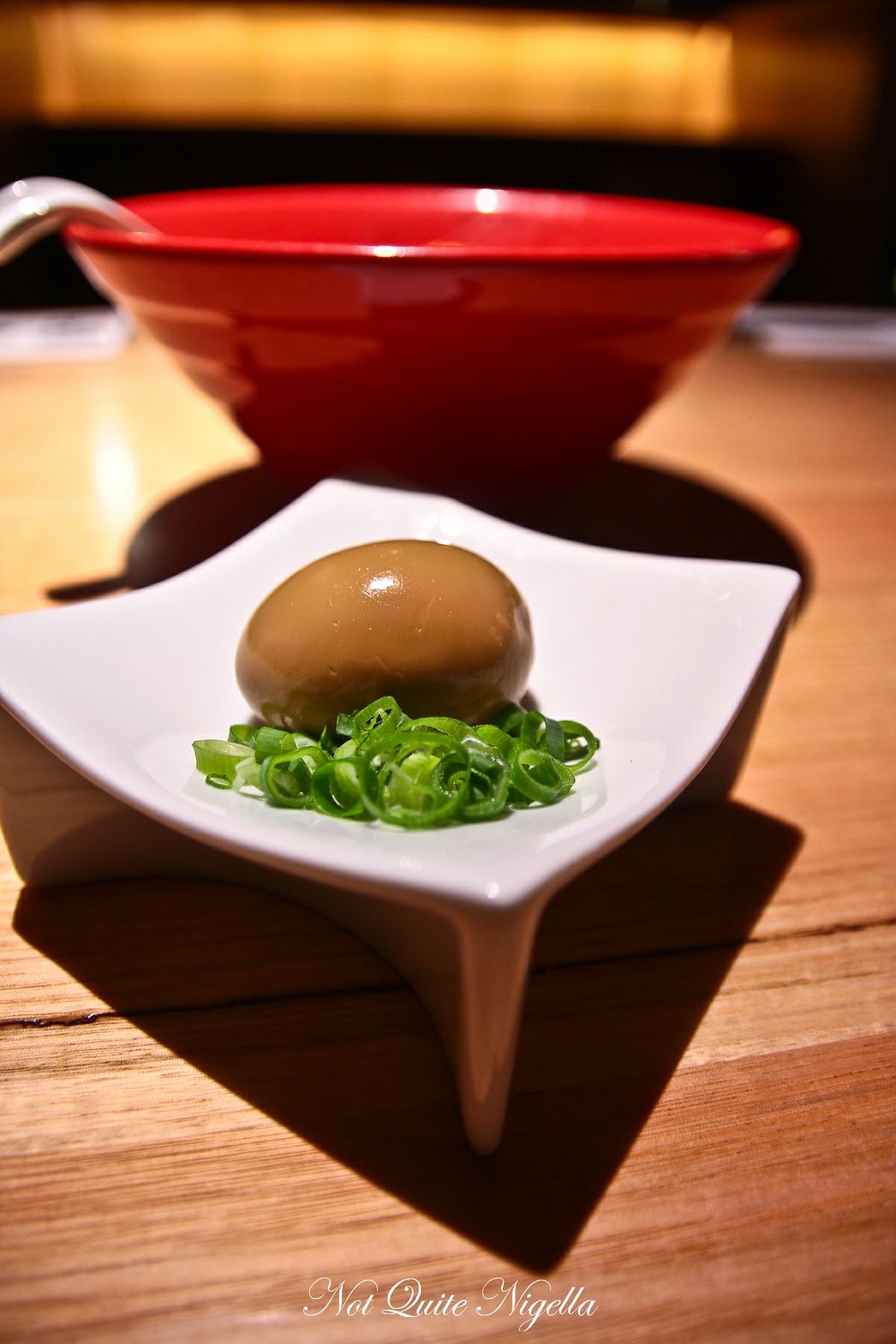 My first mouthful is interesting, the garlic imparts a bitterness to the broth but a few mouthfuls in and it really grows on you once you get used to its strength, especially compared to the more delicate shiro maru. It's also served with cabbage, negi green onions and mushroom but this one has a disc of bara chasu pork belly. We also order an creamy centred onsen egg to have in it which was perfect in it. 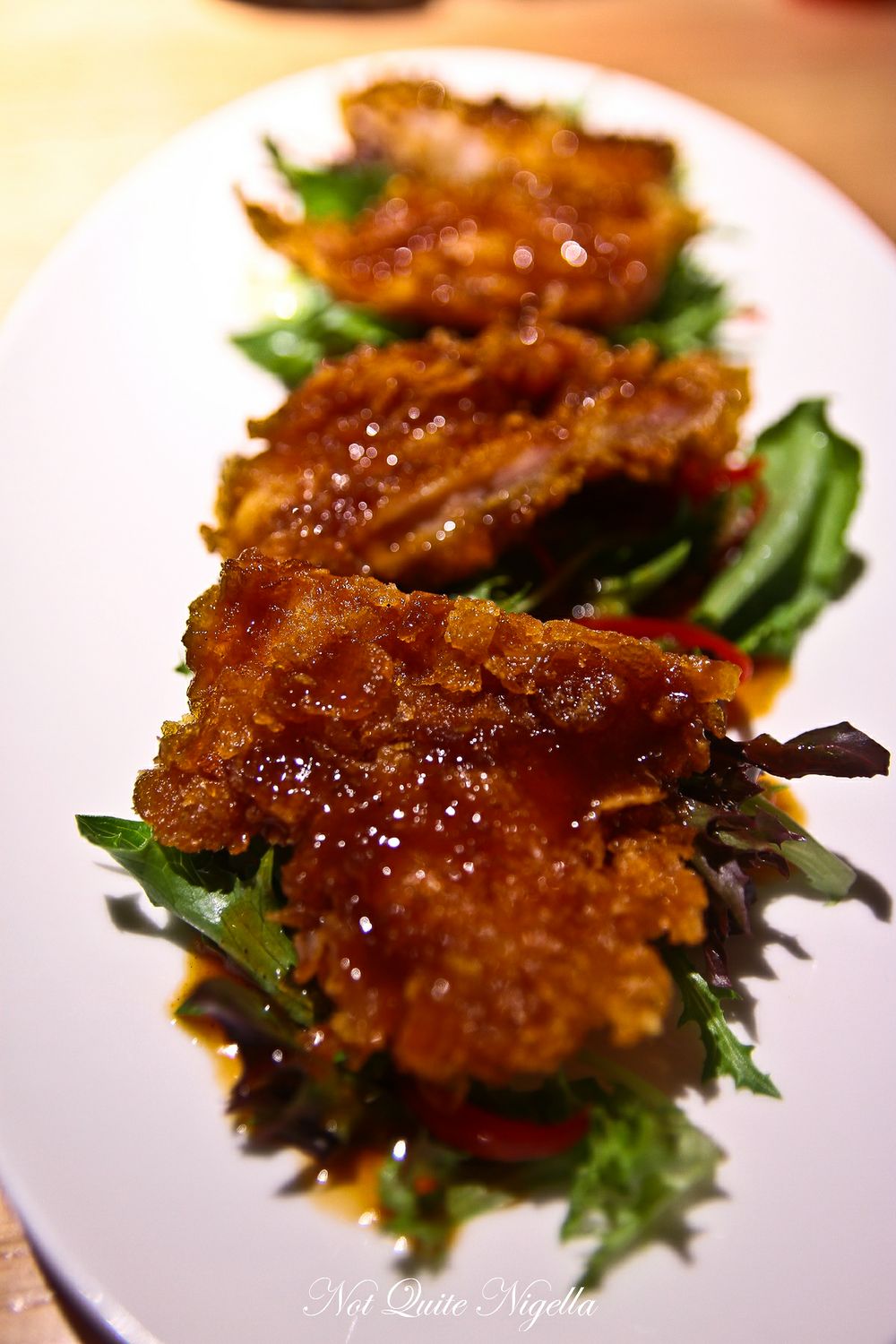 One last dish although we were getting quite full - the ramen is a filling meal in itself and I have never been able to finish off a whole bowl by myself. There are two types of sauces available with the crispy chicken-sweet or spicy. We went with spicy (although it is actually quite sweet too) and the four pieces of thigh fillet are coated in an earth shattering thick layer of cornflakes, the chicken inside remaining juicy. 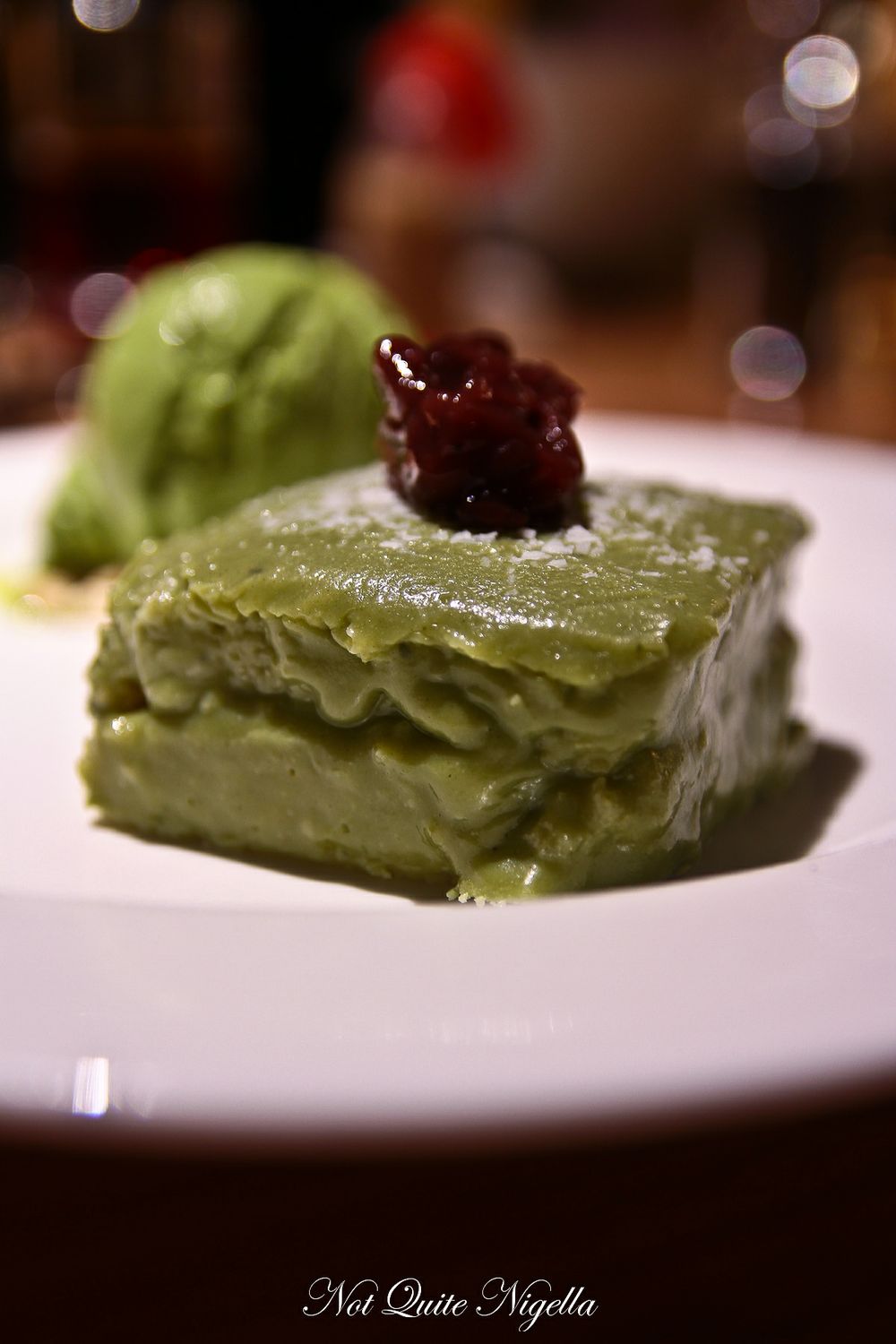 We couldn't resist one dessert (okay, that was more me than Mr NQN) so we ordered the J. Lamington. It's a Japanese take on a lamington with a green tea white chocolate coating on a vanilla sponge, split and filled with sweetened red bean paste and a topping of some too as well as a light sprinkling of desiccated coconut. It's not quite as neatly presented as a regular lamington and it's also extraordinarily sweet with the white chocolate outer and the sweetened red beans. There's a scoop of green tea ice cream which is less sweet which it really needs to counteract the exaggerated sweetness of the lamington.

The bill comes to a reasonable amount considering the amount that we've eaten and how full we are. As for ramen loving Mr NQN, he suggests a return visit-the next day!

So tell me Dear Reader, do you ever return to a restaurant the next day after a meal? And at what time do you usually eat out? And how would you order your ramen? Soft, hard, very hard or like wire? 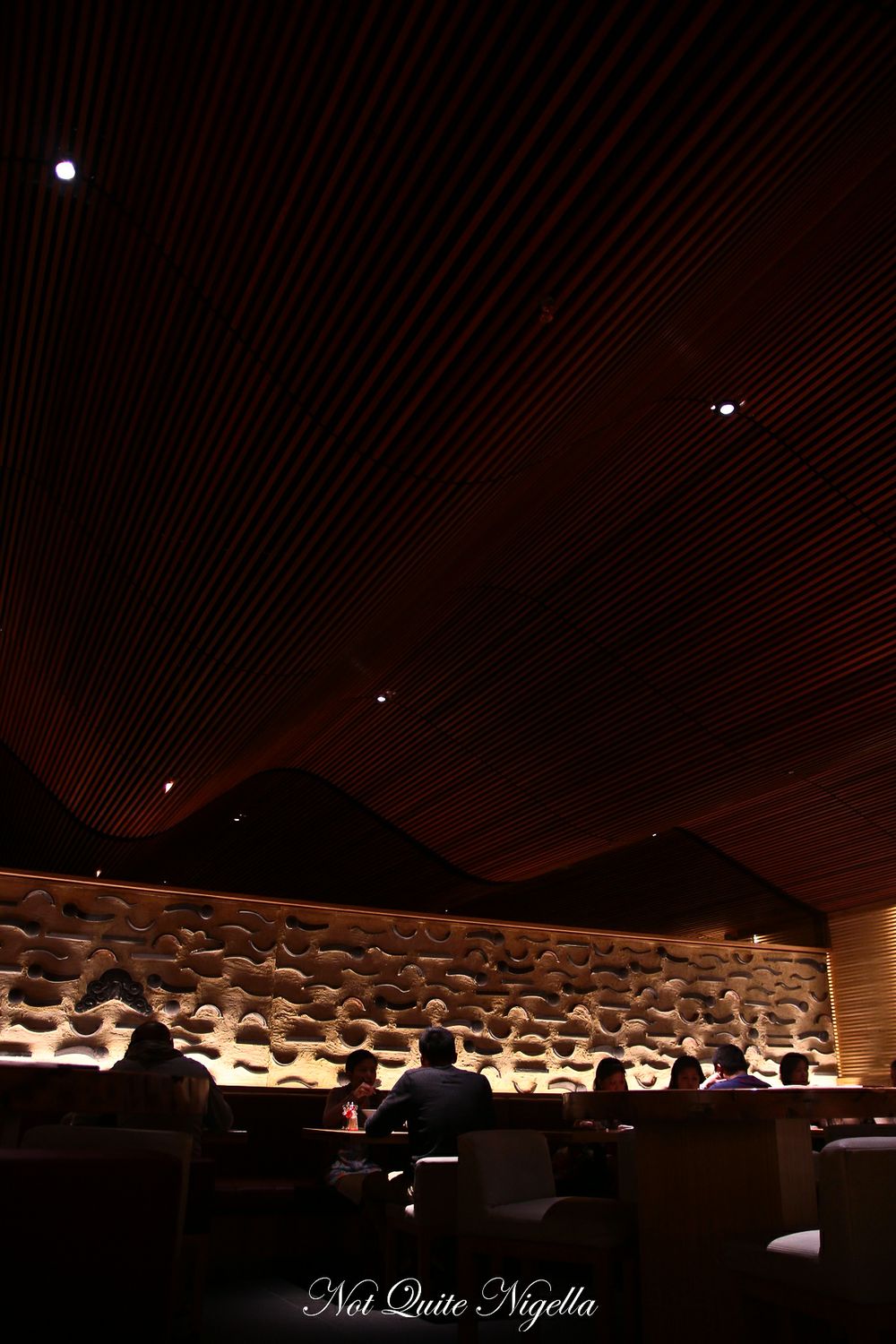