The Lock-Up Prison restaurant at Shibuya 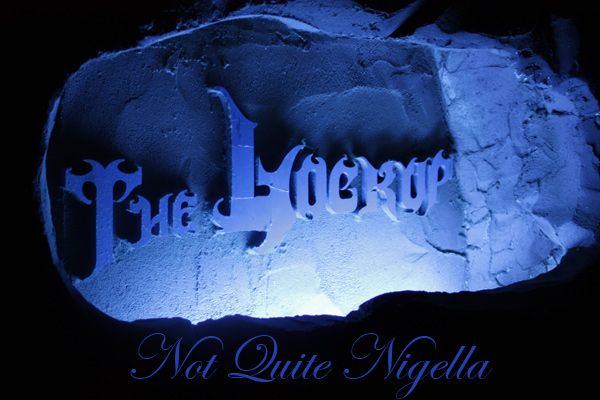 What would you say if I invited you to come along to a Haunted Prison themed restaurant, in one of the busiest hubs of Tokyo and told you that you may indeed be scared senseless entering the restaurant and that you'll be led to a jail cell in handcuffs and then locked up in it for the duration of the meal? Sounds good? Then you're someone that I would be friends with. 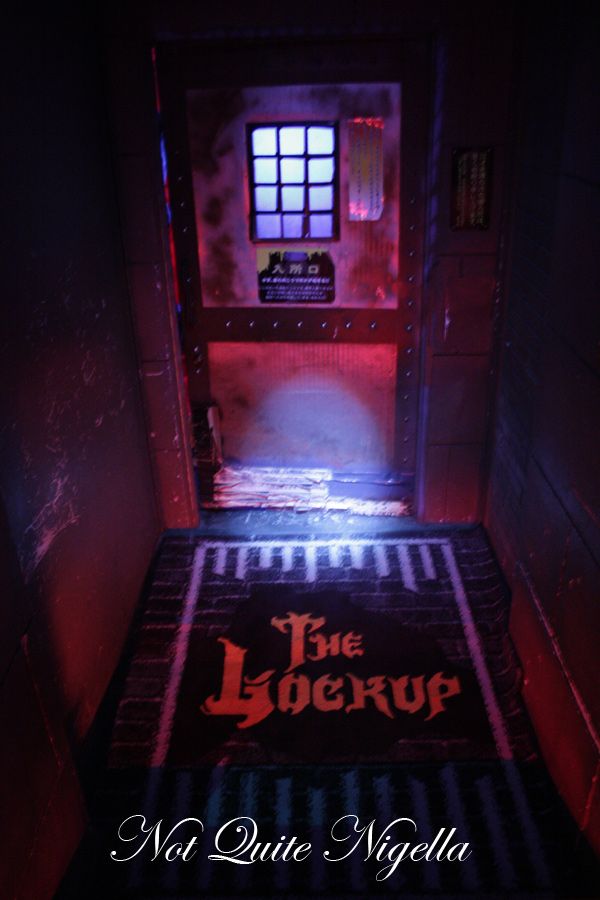 I had been looking forward to The Lockup in Shibuya ever since arriving to Tokyo as I kept hearing how very weird it was. At another location (there are several Lockups throughout Tokyo), apparently you and your party get placed into a darkened room and if you find the secret opening, then you make it into the restaurant. I had no idea what to expect so when we see the sign indicating we are to go to Basement 2, we follow, hesitating. The entrance looms and there is a genuinely spooky atmosphere given by the extremely dark and winding hallways, cold rush of air and cackling and screaming sounds around us. We inch around the corner slowly, as to not to fall (it's a lawsuit waiting to happen and this would never happen in a litigious country like America or even Australia) and what happens next frightens the hell out of me, a man strapped to an electric chair, Clive Barker from Hellraiser sans pins, rocks back and forth screaming with lights flashing. 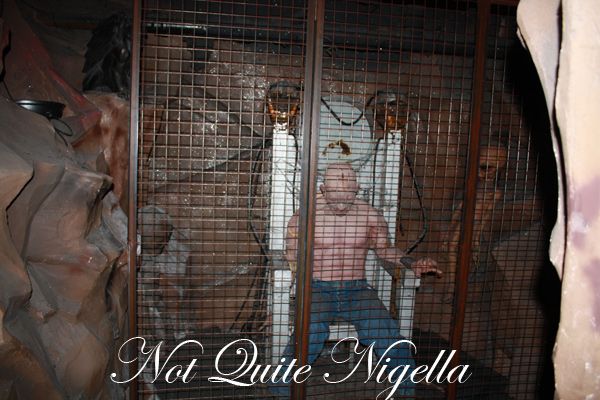 I scream my lungs out and then fortifying myself, move on where we encounter other bumps and things designed to scare (I won't ruin the surprise for those that want to go) and encounter three doors, one door being the correct one, and two others....well let's not ruin that for you too! If you want to experience entering the LockUp there are a couple of videos on Youtube ;) 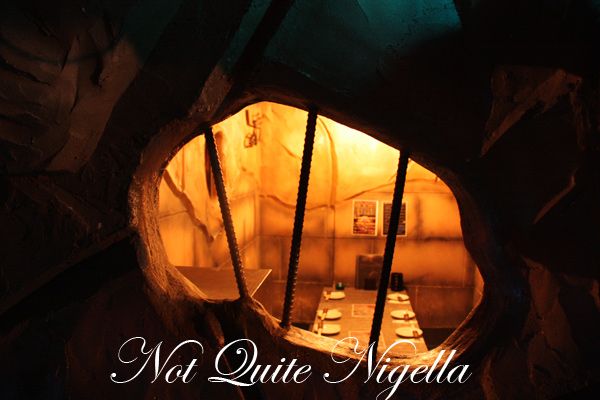 Making it into the sanctum of the restaurant, my husband is led by handcuffs to our prison cell (I don't get handcuffed :( apparently, only one member of your group is which I think is a bit disappointing). We get our own "prison cell" and are locked in although the door isn't actually locked and we are free to go but they do pull the doors shut. 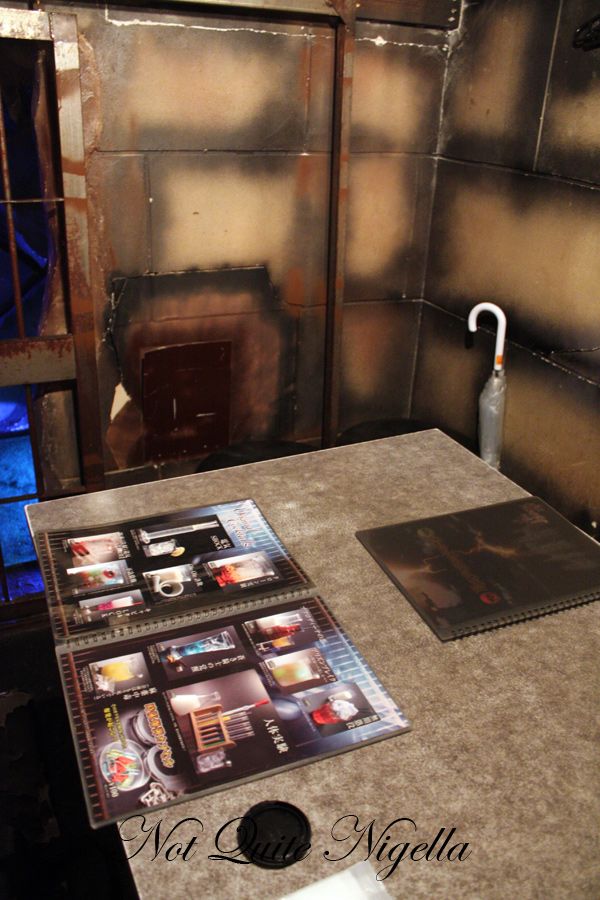 We peruse the menu and find some cocktails that tickle our fancy, mainly due to the presentation as we can't actually read the menu that well and there is no English menu. It's Izakaya food, which I absolutely love as I like small dishes in a plentiful number so that I can try as many tastes as possible.

A friend translated the cocktail menu for me as it reads as follows: 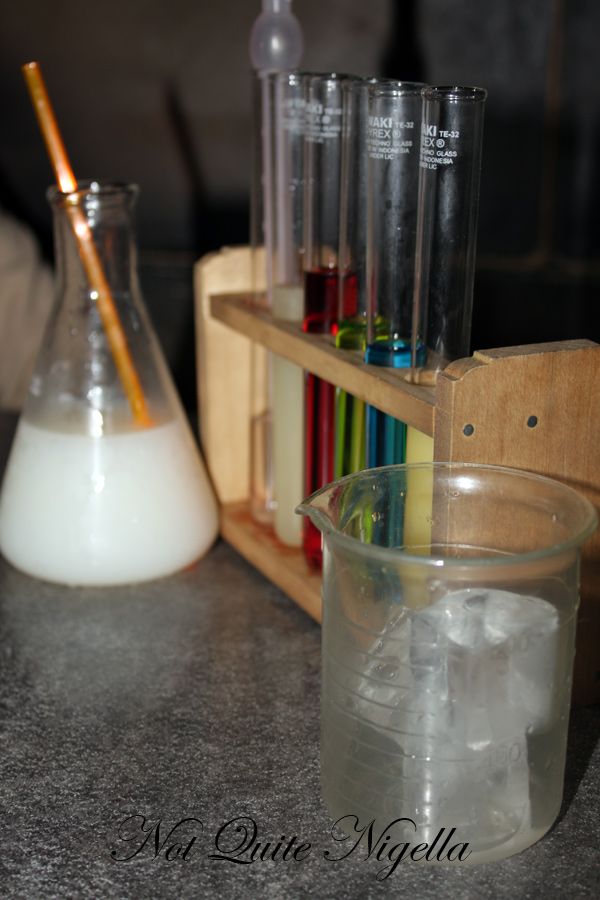 Our cocktails arrive, the first one a non alcoholic number served in a beaker and with 5 test tubes with different flavours and a dropper to add each flavour to the drink. The drink itself is like a carbonated light yogurt drink and the flavours are sweet and tasty. I enjoy this chance to play scientist and "mix" drinks all night. 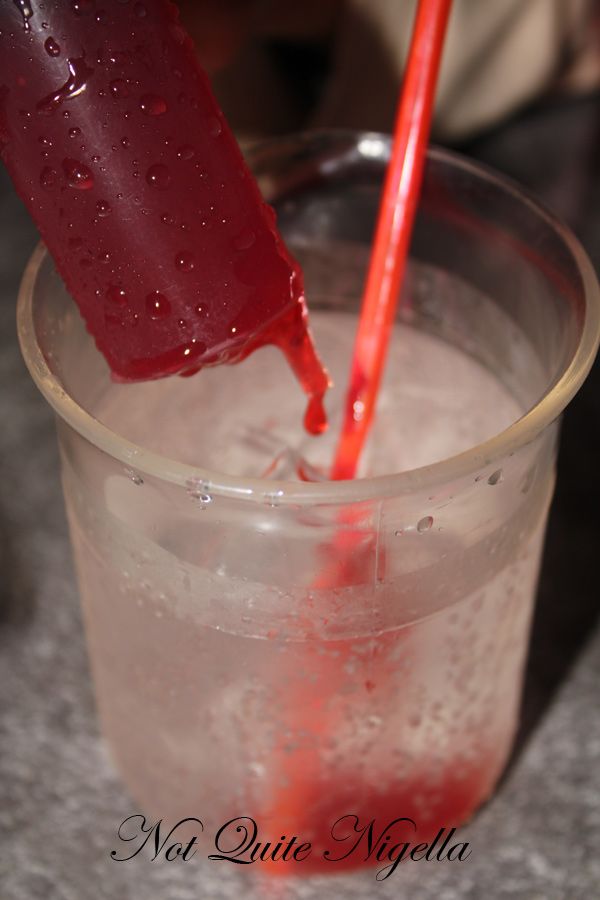 The second drink comes also comes in a beaker but this also has a syringe full of red jelly which we squirt into the drink. It has a sweet berry flavour to it and is alcoholic (and strongly so). 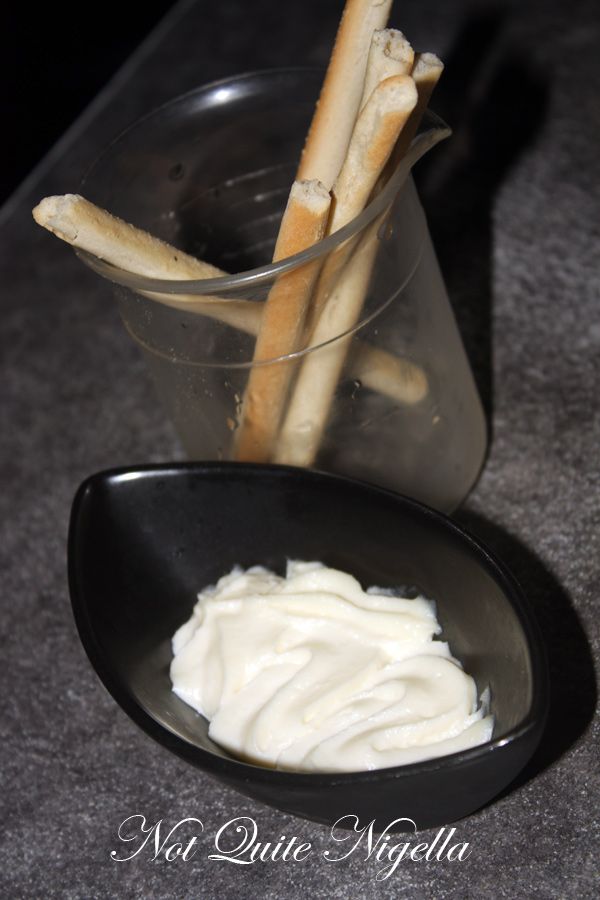 The drinks also arrive with some breadsticks broken in half in a beaker along with the sweet and savoury cream cheese. It's curious and not too bad indeed. 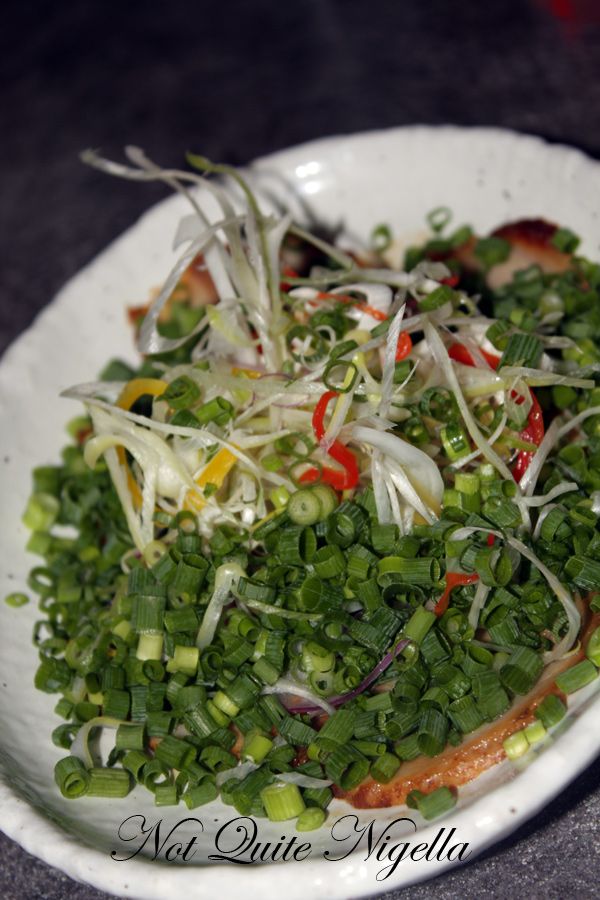 Our range of dishes arrives in quick succession. The BBQ pork dish at first looks like it has too much spring onion on top of it but once popped into the mouth, it tastes perfect, the pork beautifully soft and melt in the mouth. It's a delicate touch for an Izakaya and we are both impressed. 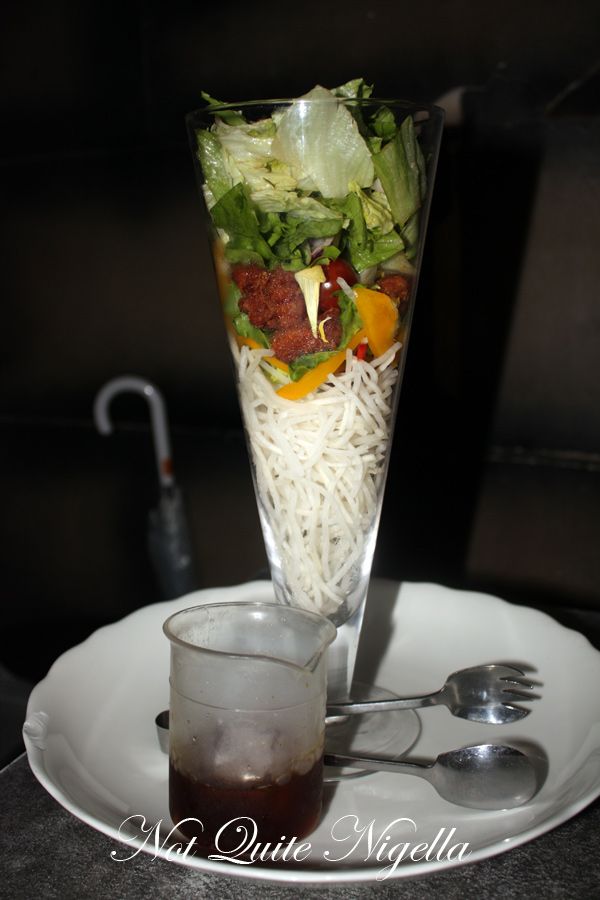 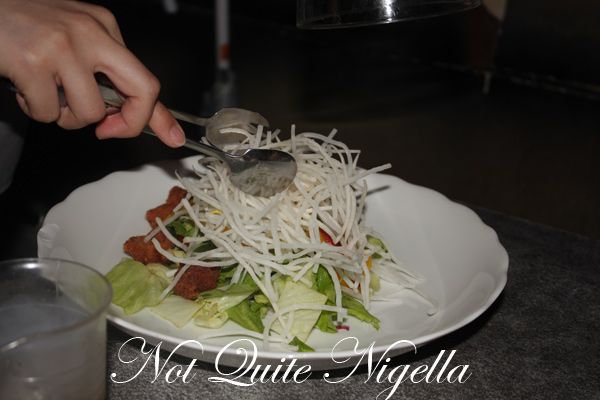 The second dish, a 35cms tall salad in a glass arrives and the waitress serves this up by tipping out the salad onto a bowl and spreading it out. There is finely sliced crunchy daikon, lettuce, cherry tomato and fried chicken pieces with a Japanese Wafu dressing. There's no egg as per the picture though but we welcome the taste of fresh salad. 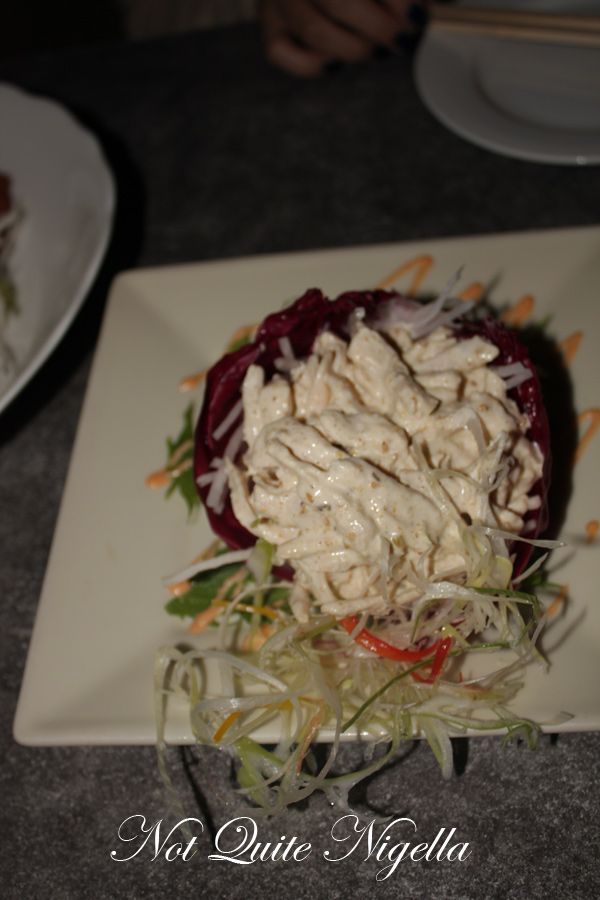 The third dish is actually different from what we had ordered but it's very good so we don't mind in the slightest. It's a chicken and sesame mayo Chinese chicken salad served in a purple cabbage cup. It's very good, one of my favourite salads ever so we don't ask what happened to the original dish (not that we could anyway, my Japanese only gets me as far as ordering, not complaining) 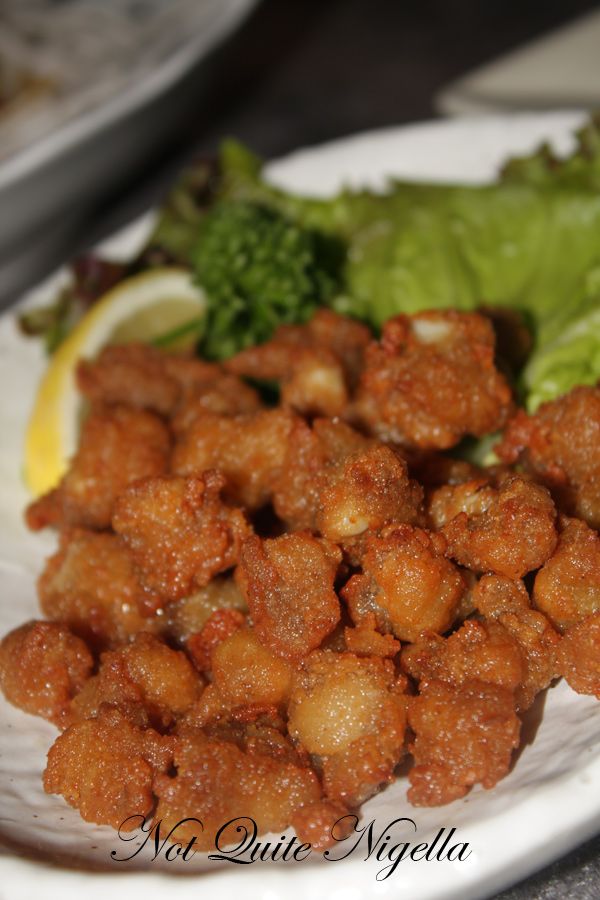 The fourth dish is one of my favourites ever since I first had this in an Izakaya. It's not always available at every Izakaya and whenever I see it, I always order it. It's Nankotsu (chicken cartilege), breaded and deep fried so that the bone is no as crunchy as when it is grilled. A sprinkle of Tabasco and it is perfection and this is indeed. 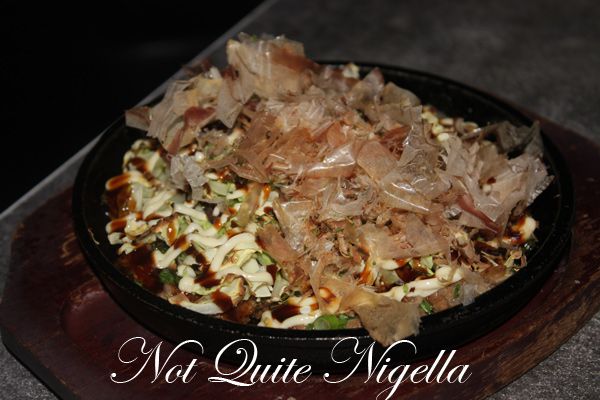 The last dish, a beef mince okonomiyaki is not to my taste. I am also very full so I pass up on this after a first taste. My husband prefers the mince as it is more "moist" than a regular Okonomiyaki whereas I prefer the regular version. This tastes like a lot of mince with some fish flakes on top. My husband on the other hand is hypnotised by the swaying of the fish flakes.

We sit back and watch other parties being led this time by bondage-y style clad waitresses and wish we had more time to try the other Lock Up experiences. Just because a meal tastes better after a fright. 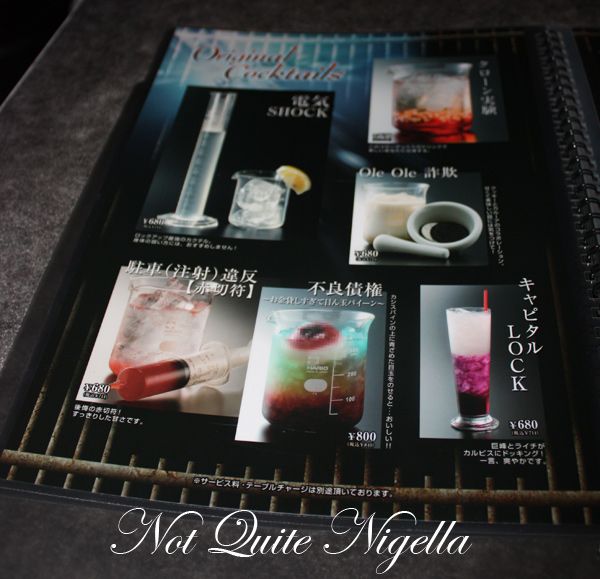 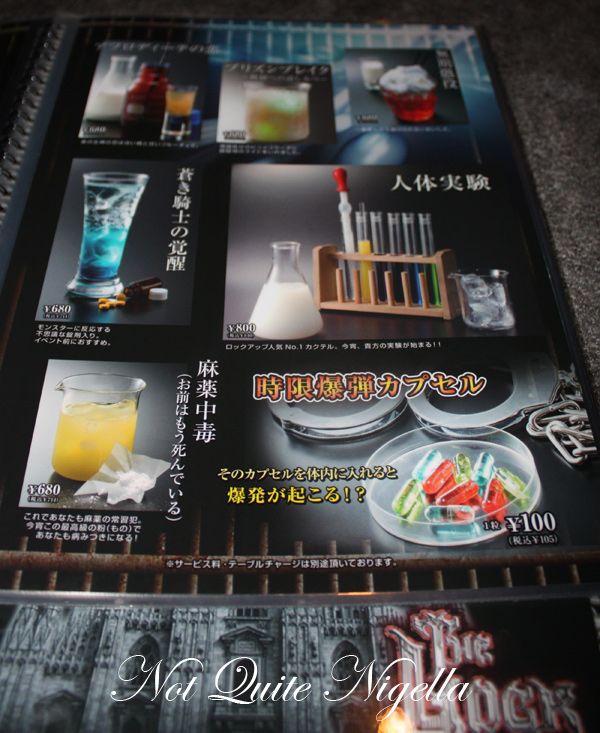 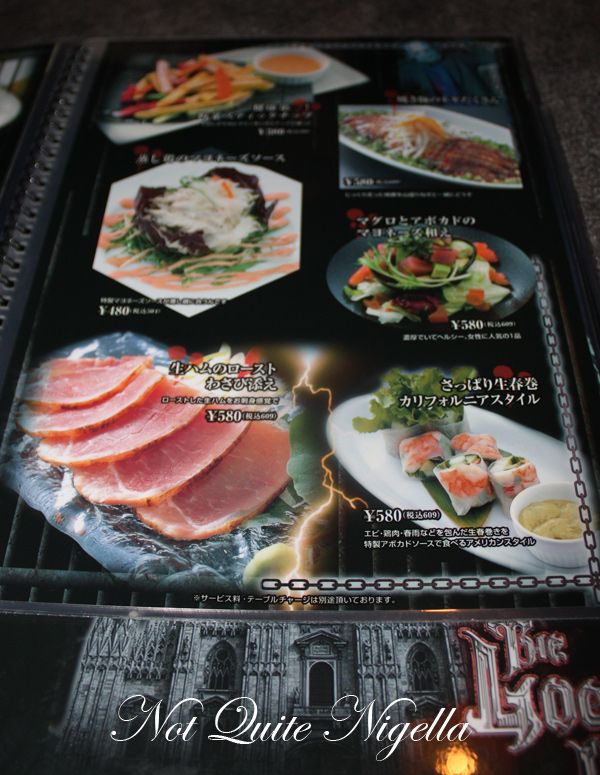 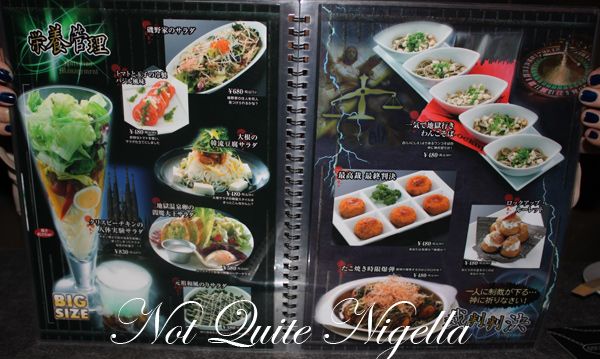 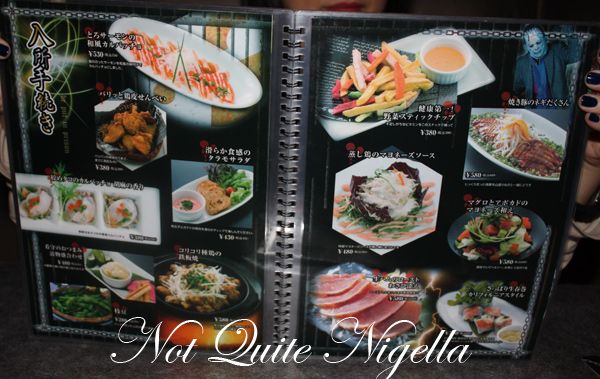 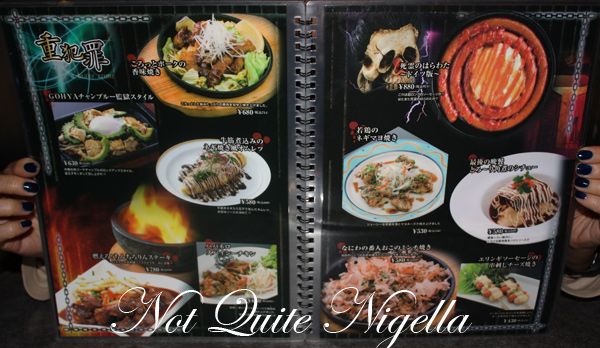