Amy, Amy why hast thou forsaken me? This caketh didn't turneth outeth! 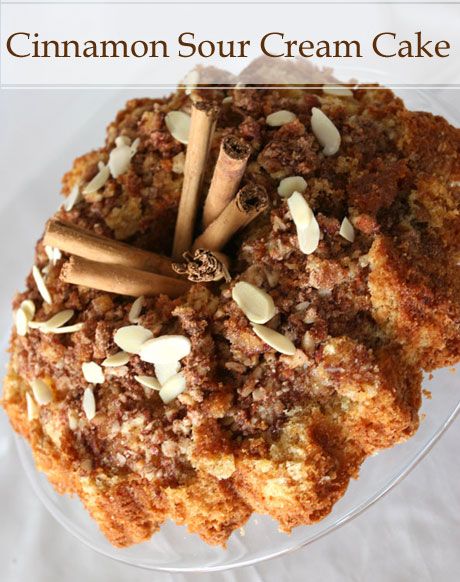 I approached this recipe with some trepidation. The first line states " You will be putting the cake into a cold oven and then setting the temperature to 180c/350F/Gas 4 and baking for 55 minutes" which goes against most cake baking handbooks and experience where the first third or half of the time in the oven are crucial. I thought that perhaps Amy was being a bit too nutty and was playing a joke but I played along with it and placed it in the cold oven and turned it up. The cake did indeed sink in the middle in a very bad way.

Not only that, any Amy can't fully be blamed for this, the top of the cake did not come out of the tin. The cake itself is just too soft and airy to be able to be baked in a fluted or fancy tin. I did butter and flour the tin so it should have come out just fine-_should have! _Another problem was that the chopped nuts sank to the bottom and even though I had filled the cake with half of the mix, the sinking meant that there was only one quarter of the cake at the top that stuck as the nut mixture sank to the bottom (ie the top). 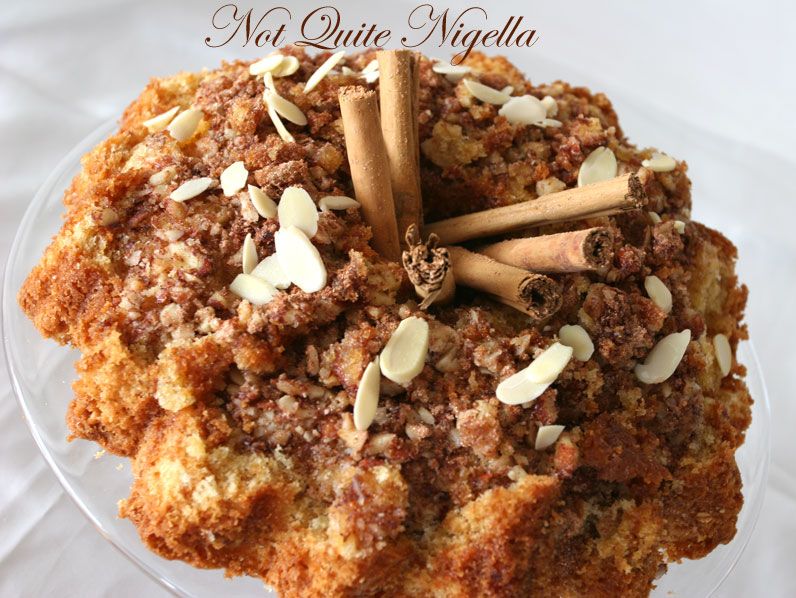 I tried to tart it up with some cinnamon sticks and flaked almonds to distract you. So let's pretend it was supposed to look completely rustic. Oh and if you'd like to see how the resultant cake is supposed to look like when baked in the special tin, you can see one that I made here.

But this doesn't mean that the recipe isn't worth making. The actual cake taste is airy and light (a result of the sour cream and baking soda) and incredibly moist. You might want to avoid the same fate as that of my cake with these tips:

Step 1 - Don't use a fancy pants pan like I did, just a springform or loaf tin lined with baking paper. You _need _the paper.

Step 2 - Toss the nuts lightly in flour to prevent them sinking.

Step 3 - Preheat the oven to 180c and bake like a normal cake to avoid the middle sinking.

Step 4 - Don't make this for a special occasion as it may cause you anxiety.

You will be putting the cake into a cold oven and then setting the temperature to 180c/350F/Gas 4 and baking for 55 minutes. You will a 9 inch greased tube pan. This is a pan that creates a ring shaped cake

Beat until light and fluffy 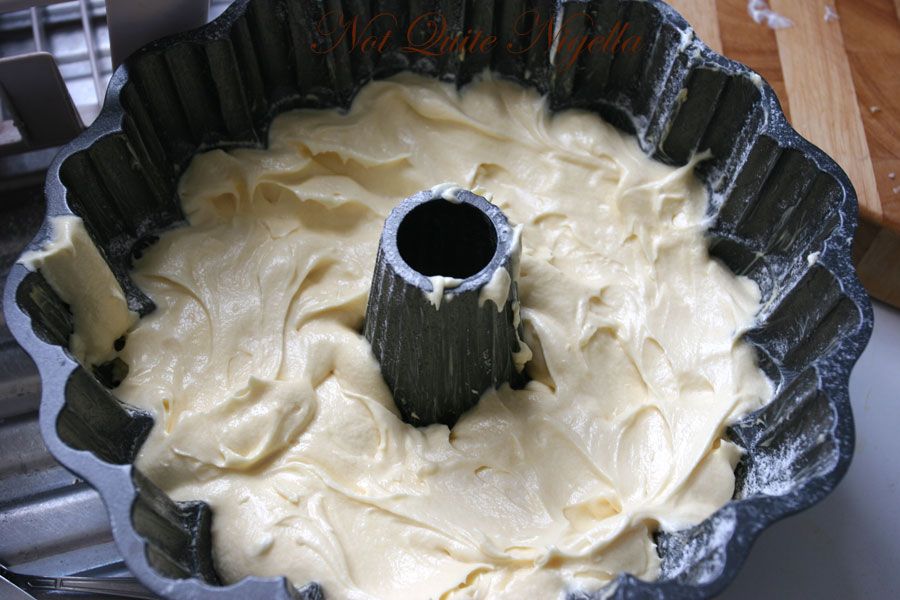 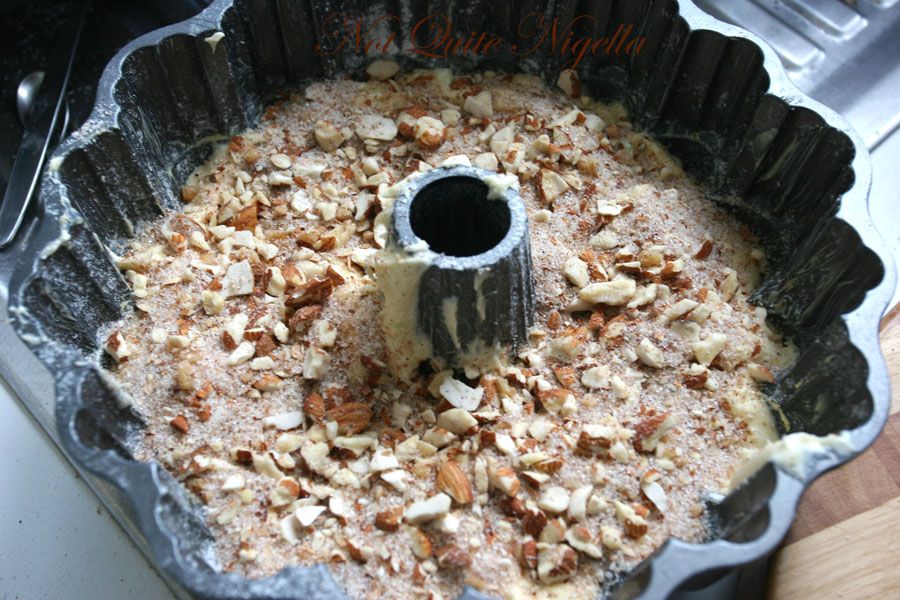 Sprinkle half the nut mixture (below) over the batter. 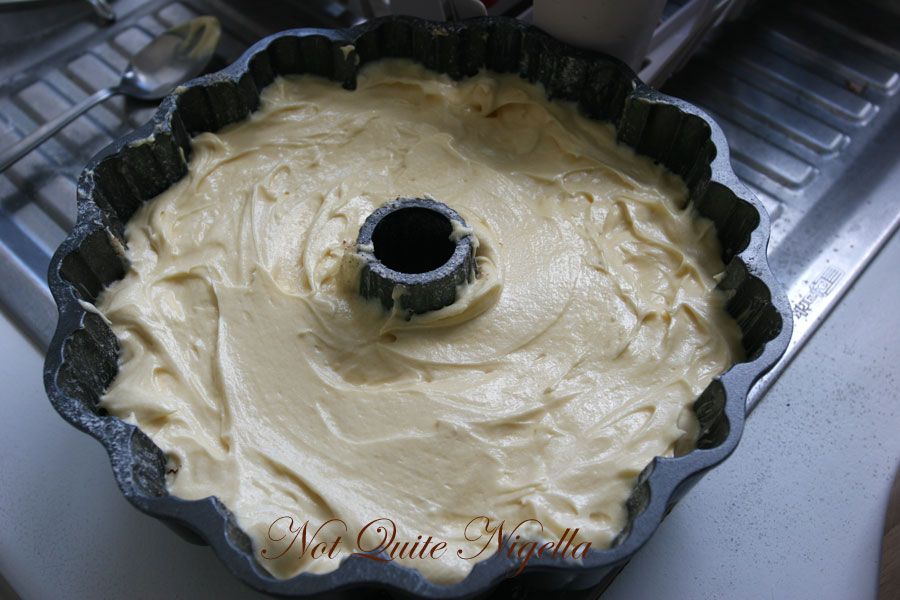 Then spoon the rest of the thick batter on top of that and top with remaining nut mixture. I just put the nut mixture in the middle, I didn't really see any point in having the sugary nut mixture on the bottom of the cake.

For the nut mixture I use a small hand nut grinder. Grind 120g of finely chopped walnut meats and mix with 1 1/4 teaspoons of cinnamon and 2 tablespoons of sugar. 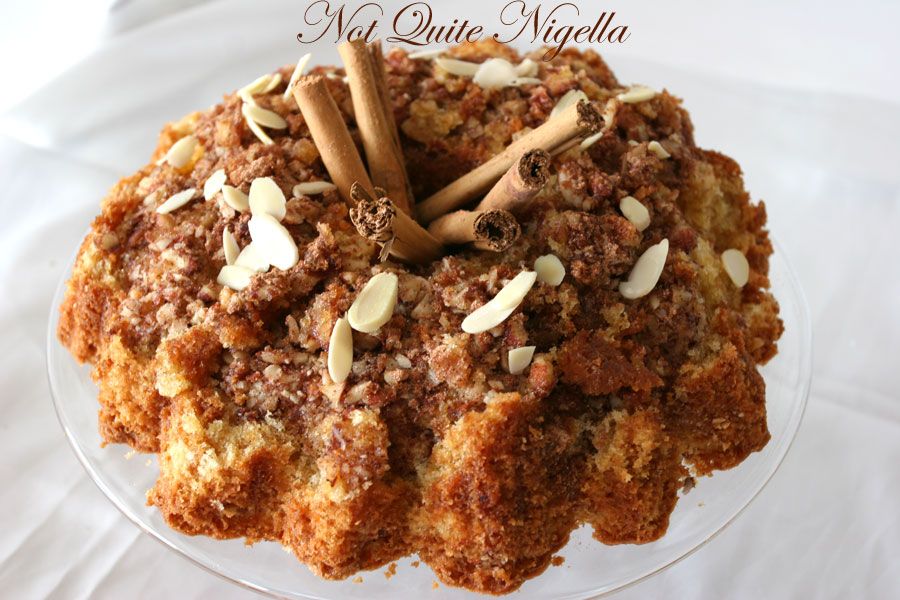 Recipe from Amy Sedaris' I Like You: Hospitality Under the Influence