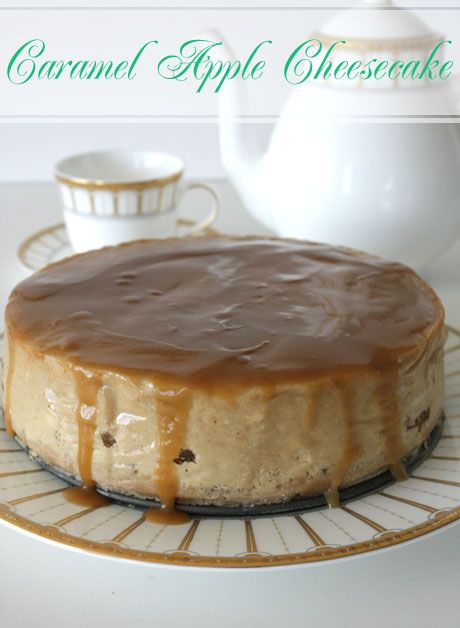 Kids can get away with so much more than adults and whilst "It's not fair" is a cry often uttered by outraged children, sometimes I think they have no idea how good they have it. I'm embarrassed to admit that I recently bribed M's son S to work his magical kid charms by asking an adult, in a cute little kid's voice if they would do their magic trick (which I desperately wanted to see). 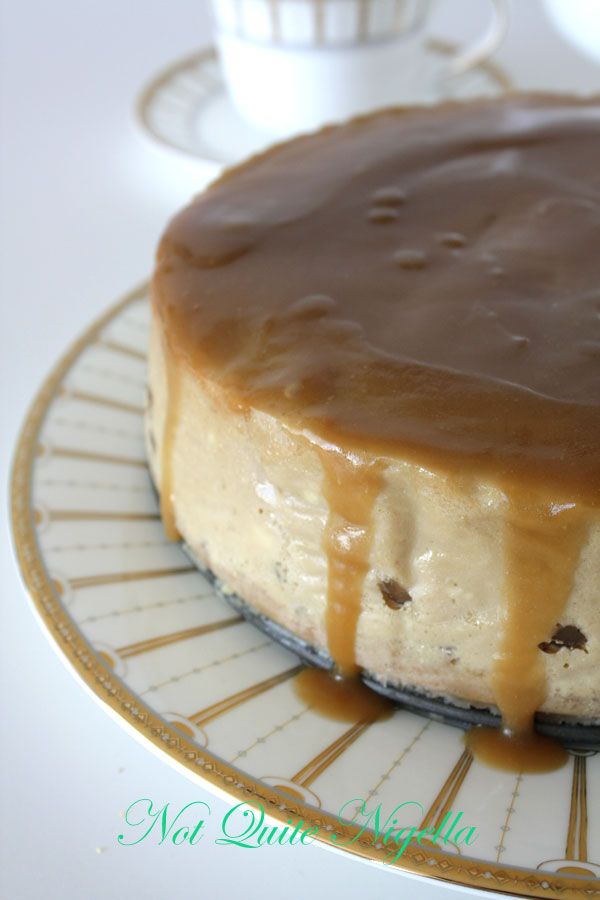 My logic was that the request just wouldn't have been the same from a grown adult. In fact, I had already asked and my wish was not granted. And later when my husband reminded me that I was in fact being a bad influence on them I was of course suitably chastised but I reminded him that S's eight year old little brother In piped up mid negotiation saying "Tell them you are dying! Then they'll _have _to do it!". 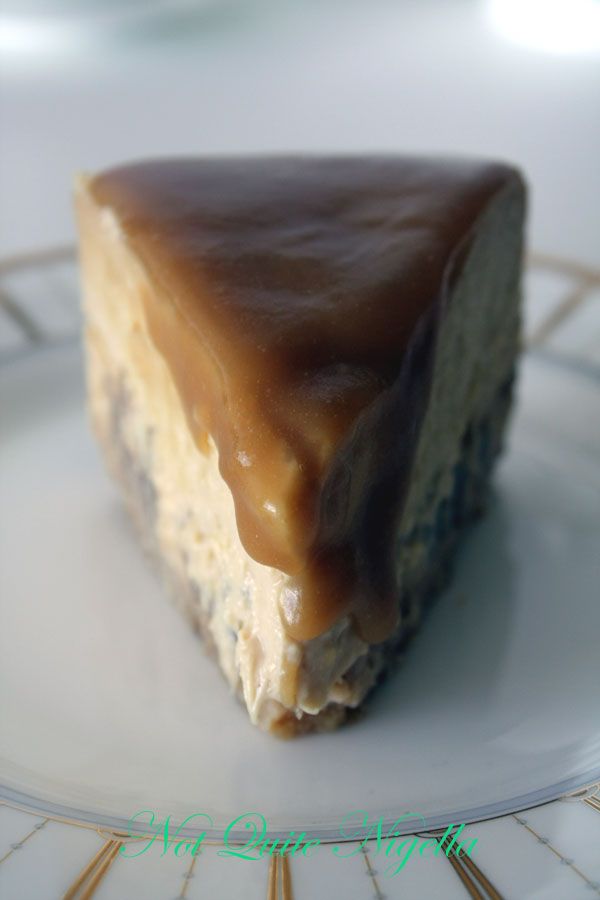 His reward for asking nicely for something to be done? The cheesecake of his choice. This is the boy of the never ending dessert tank. For those of you unfamiliar with the concept it's a separate compartment in the stomach, usually exclusively found in children, reserved for desserts. S's dessert tank is so great he boasts of eating a whole cheesecake over 2 days. At first he asked for a Vanilla Cheesecake but when I saw the recipe for an Apple Butterscotch cheesecake in Feast, I suggested it to him and he was nodding without a split second's hesitation. Who says kids are hard to please? This cheesecake was more inspired by Feast as Nigella's recipe did not call for any apple, rather apple schnapps which isn't quite on the diet of your average 11 year old. 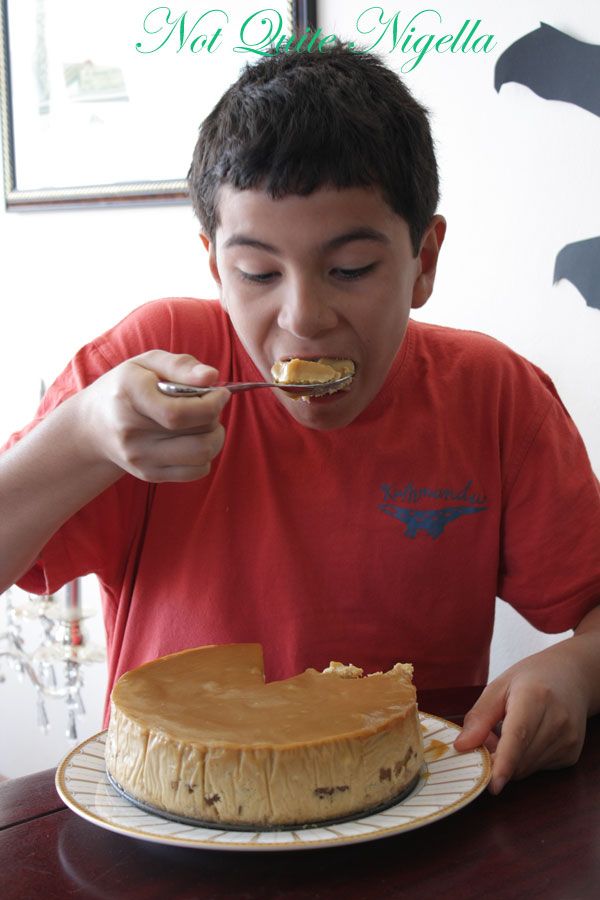 Open the hatch for the dessert tank...

When they arrived to pick up their bounty they buzzed our intercom and all I heard was an excited "We're here to pick up the cheesecake!!". And after grudgingly sharing a piece with his friend, S was in full dessert-tank filling mode. I gave him a giant serving fork to assist him in his endeavour and he settled in for a demolition job stopping only when mum M removed the giant fork from his hand to much protestations, after envisioning an 11 year old boy on a major sugar high all afternoon. 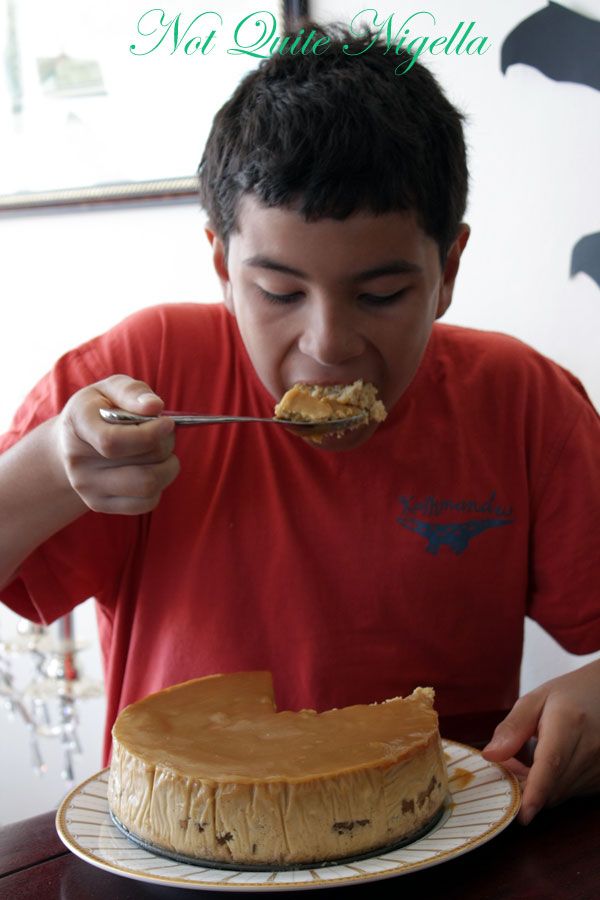 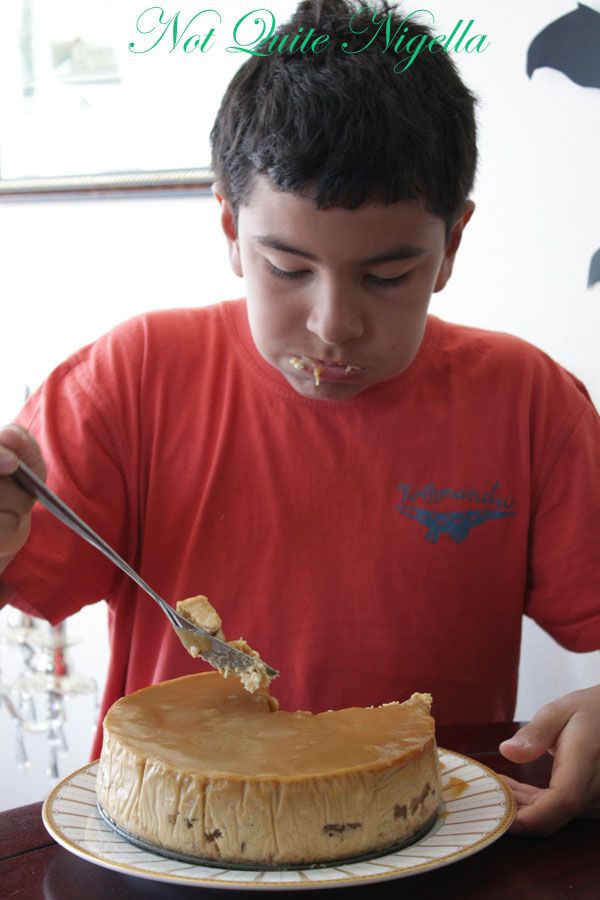 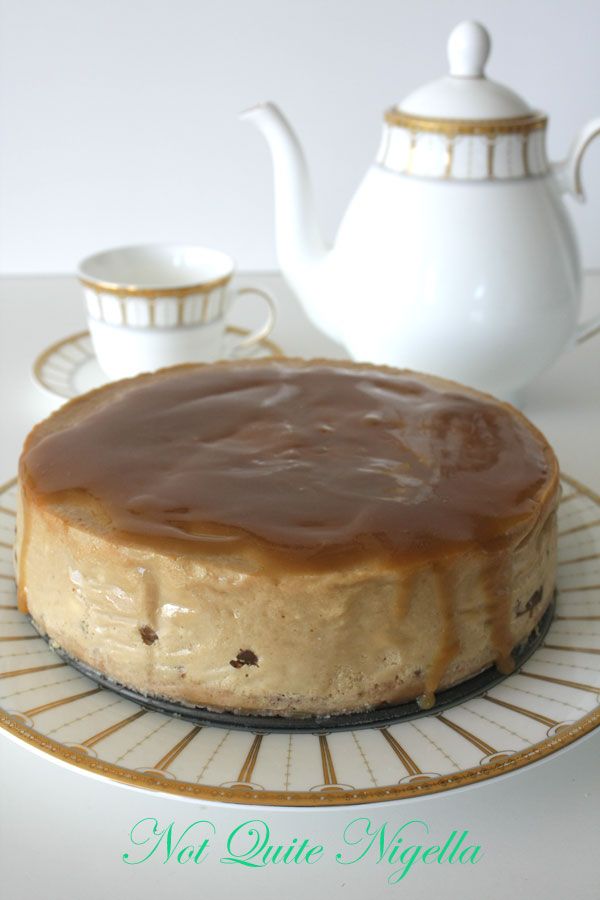 Step 1 - Preheat the oven to 160C fan forced. Add butter into a medium saucepan and cook apples with brown sugar and cinnamon gently until starting to become tender but not soggy. Stir in vanilla and cool. You could also use tinned apple pie filling with some added vanilla if you wish.

Step 2 - Blitz the biscuits and cinnamon in a food processor until crumbled finely. Add butter until it comes together. Press into a greaseproof paper lined 20cm diameter springform pan and place in the fridge while you do the filling (if you also line the sides with greaseproof paper its much easier to remove).

Step 3 - Put a kettleful of water on the boil. In the cleaned food processor beat the cream cheese, brown sugar and cornflour until smooth. Add eggs one at a time. 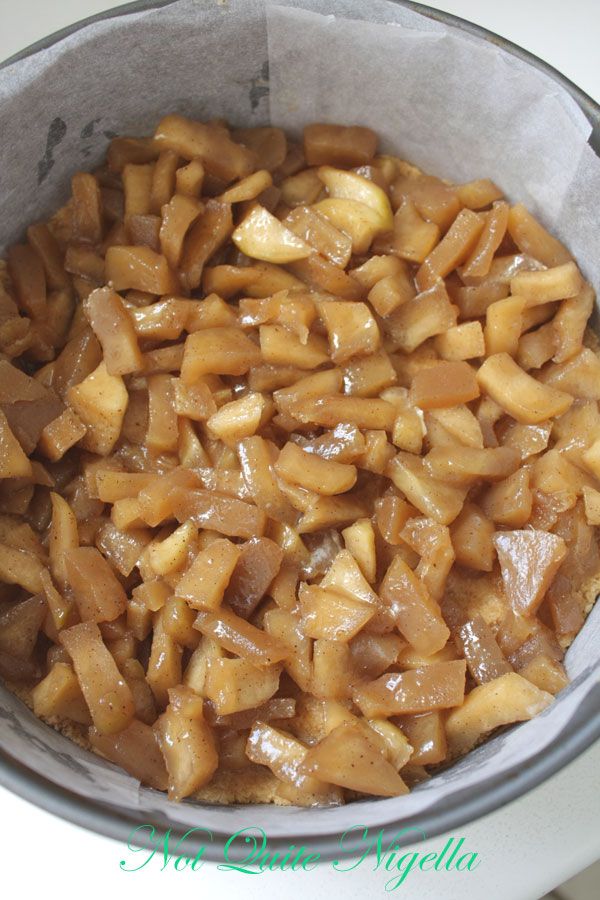 Step 4 - Place cooked apples on the bottom of the cheesecake. Pour over the cream cheese mixture. Put 2 layers of foil around the tin to prevent any water from the water bath from getting in. It's useful to have that wider foil for this task if you have it. I didn't and it was still ok though.

Step 5 - Place tin in a deep baking dish and pour filling into the foil lined tin. Then pour the boiling water around the cheesecake so that it sits in a bath being careful not to splash any on the cheesecake itself.

Step 6 - Carefully transfer to the oven and bake for 1 1/4 hours although you may want to check at 1 hour. The outside should be set and the inside with a hint of wobble which will firm up in the fridge. Remove the foil and cool on a wire rack and when cold, place in the fridge overnight covered with clingfilm. 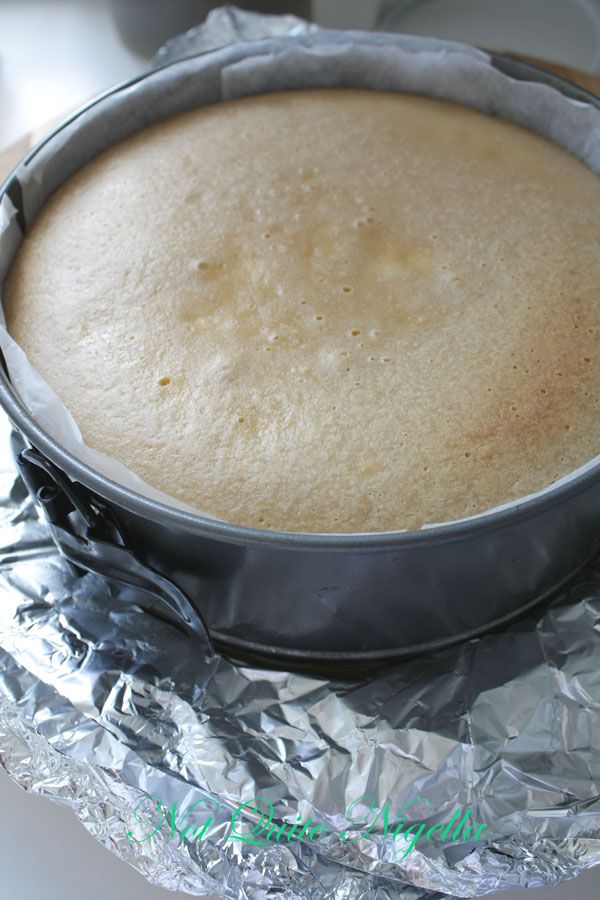 Step 7 - Make butterscotch sauce: Place butter, sugar and cream into a saucepan over low heat. Stir until butter has melted. Simmer gently for 5 minutes without stirring. Remove from heat. Allow to cool for 20 minutes or until thickened.

Step 8 - Unclip the springform tin and unmould from the edges. Place on a serving plate (I always leave the cheesecake on the springform base) and then drizzle over with the butterscotch sauce. 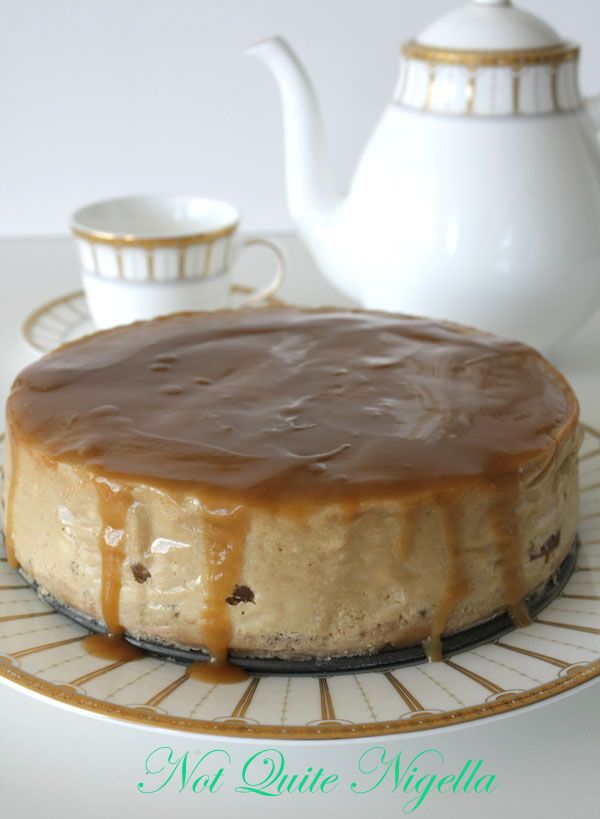