Oceanic Cafe, Surry Hills, Sydney (a step back in time) 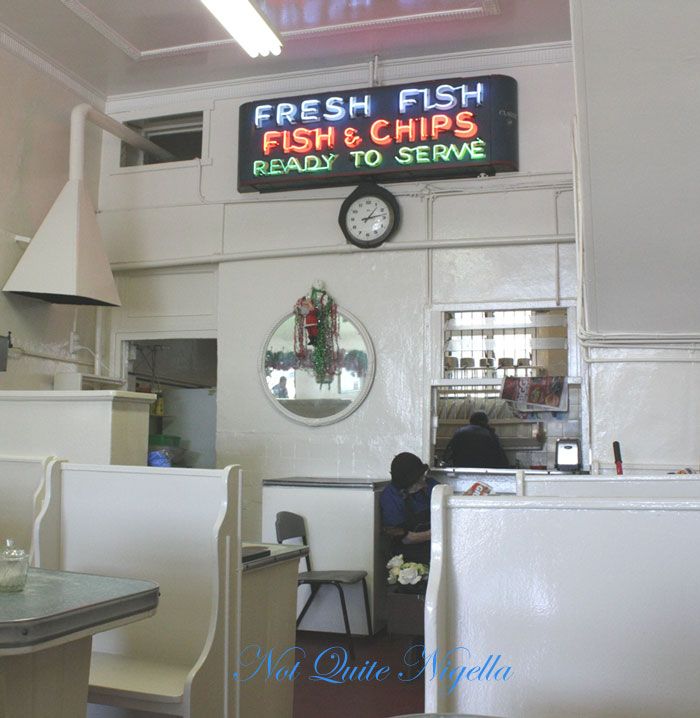 There are some places, that seem a little charmed, like a glimpse back in time to another era or place that you may have only seen in movies. These places usually have a story attached to them and Queen Viv's recommendation of the Oceanic Cafe is one of them. Run by a Mother and Daughter team as a community service for those in need, the interior of the cafe is a sight to behold. Unchanged from the original 1920's interior, there are booth style seats, roughly drawn menus that you know haven't changed in decades and specials of the day at the princely sum of $5 (the most expensive item being $9). As we walk in, they peer out from the little window to see who the interlopers are. We order at the table with the daughter, a smiling, slightly nervous woman who is a little hard of hearing but nevertheless unassuming and well meaning. 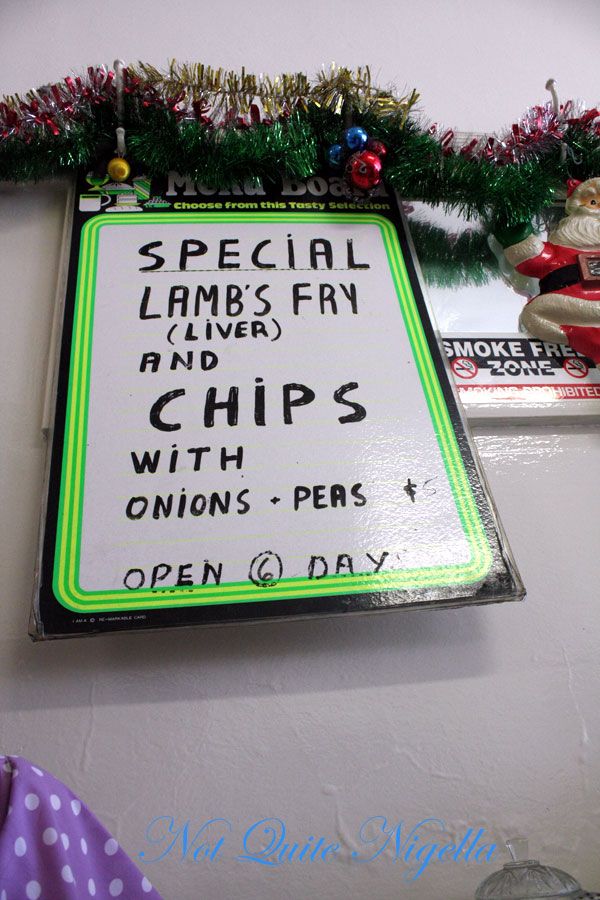 Specials board (and my shoulder-yes I love polka dots)

We hear the sizzle of the hot plate and looking through the little window Queen Viv points out the very old fashioned and original dish drying racks and pots, something we've never seen before. All of the meals come with white sliced bread and a pat of margarine in a round silver dish with the napkin tucked underneath the bread. We pay as soon as the food arrives and we ask her for water as well as it's a sweltering 37C degrees outside. She asks us if it's ok if it's tap water and of course we don't mind. 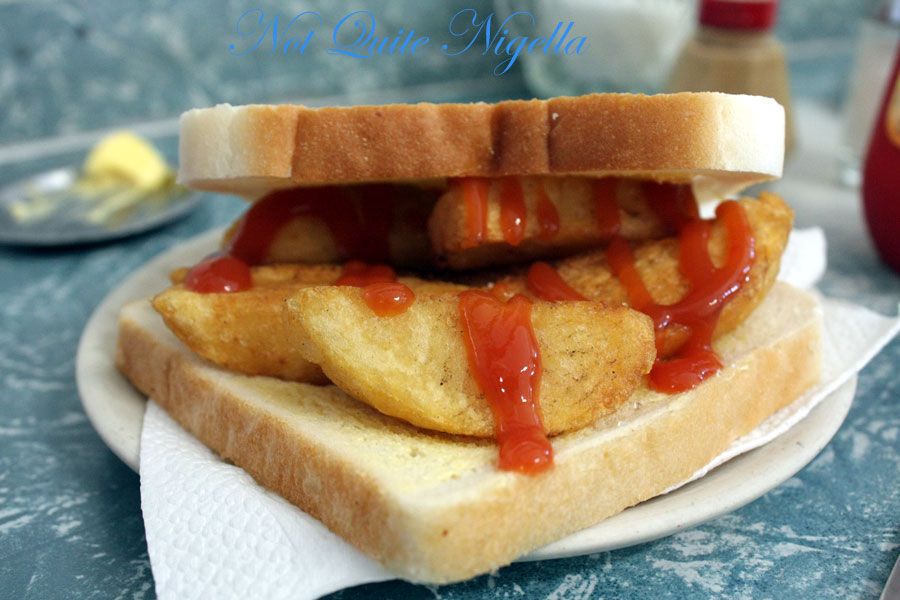 DIY Chip Butty with the bread, margarine and chips provided

We do what all good eaters do and slather the margarine onto the white bread slices and wedge the fat potato chips inside them with a generous sprinkling of salt and tomato sauce et voila! Our very own Chip Buttys - and I should let you know that they were absolutely delicious! I don't know why this is the first time I'm having a Chip Butty (oh ok that's right, it's terribly unhealthy). The fat home made potato chips are delicious, unlike other chips they taste like pan drippings from a roast, and are unspeakably good. 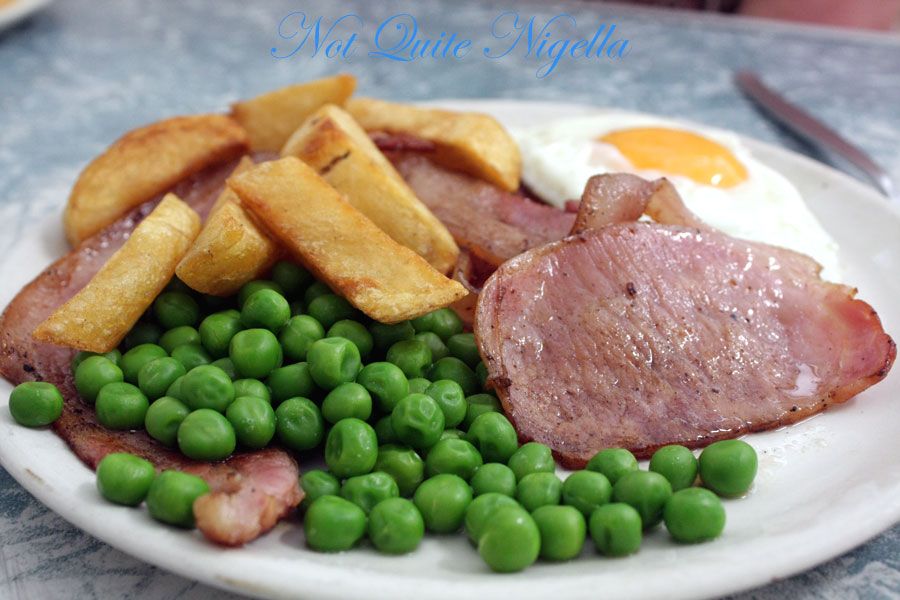 Bacon and eggs with chips and peas $5

The bacon and eggs are plentiful with more bacon than Queen Viv can finish. 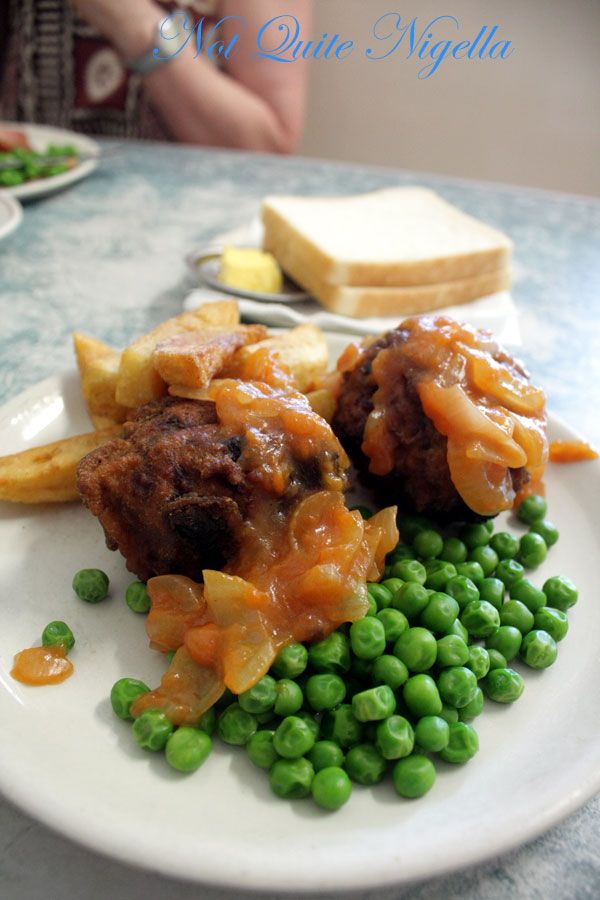 Rissoles with chips, onion and peas $5

The rissoles are two fat meatballs topped with sweet and sour onions and are deliciously spongey and soft inside and filled with mince and onions with the outer slightly crispy. I adore these and my initial intention to just try one is quickly forgotten and I eat every bit of my share and start begging for more. 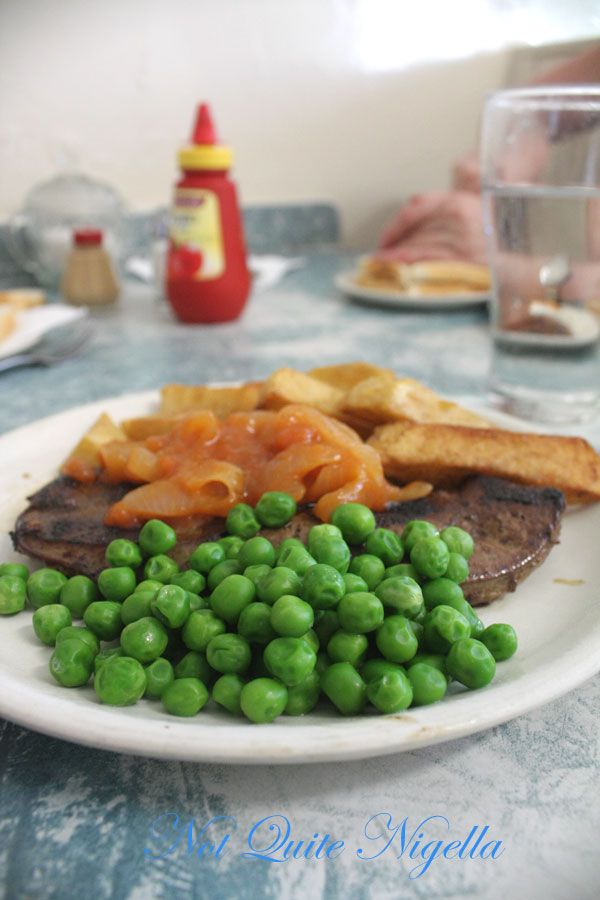 The 3 slices of Liver aren't bad at all, in fact it's less livery than ones I've had although it is a little tougher than what I've tried previously. Still for something that I tried more for curiousity value, I make good inroads into the dish. 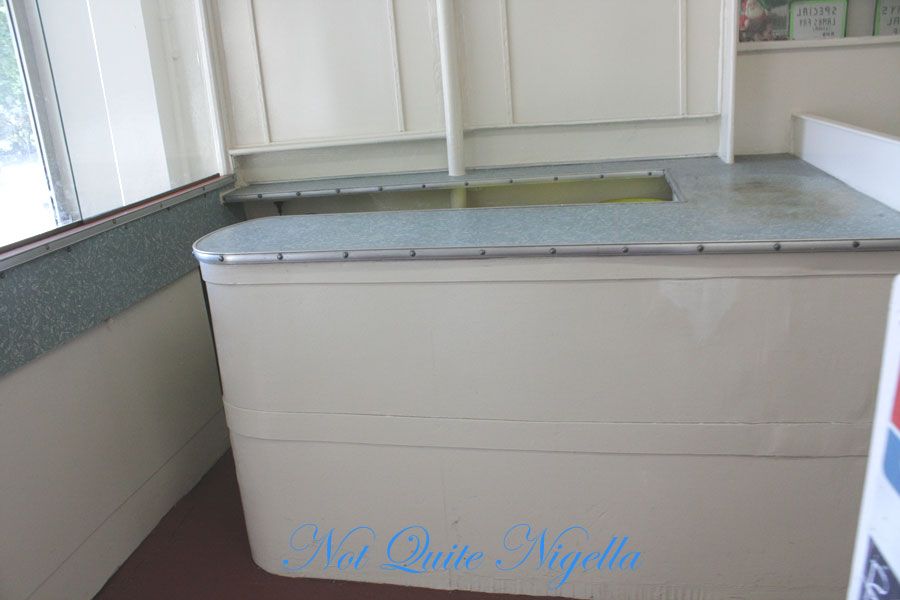 Cashier's booth at the front

As we sit back and soak up the yesteryear atmosphere, Queen Viv points out the area in which the cashier would have sat, many years ago. Fortified with as much food and grease as we can handle we get up to leave and the mother peers out from her window and waves goodbye to us.

Looking around the Oceanic Cafe as we are leaving, I wanted to know more about the Mother and Daughter duo and the history behind it and Queen Viv suggests that I contact Jay Katz of Radio FBI 94.5, a community Radio station, a man who has had a long association and friendship with them through his work driving Missionbeat vans. He's friendly and happy to chat about them, eager for the rest of Sydney to know and pay respect to their efforts. The publicity shy Mum and the daughter (Christina) are of Greek descent with the mum working at the Oceanic since the 1930's. Jay says, "There were so many down and out guys and ladies for decades who had close relationships with Christina and mum. They had a wall in the kitchen full of postcards and those postcards were things from inside Long Bay (Prison) from people who would've taken stretches there. They knew just about every character and some of them they even knew them from children and their criminal history and in that sense it's so community based."

During the time they've been open, and it's a good 70 plus years, they've seen a lot of people. "They'd have chronic alcoholics there that were quite violent. Going back to the late 70s there was a character in Sydney called The Skull who was head of the National Front (neo Nazi organisation). Mike Walsh used to put him on television but I can remember sitting across from him having lunch once and he just started to get really aggressive and scream abuse at everyone and mum came out of the kitchen and grabbed him by the back of the ear and threw him out. She was probably the only person in the country that would do that" he chuckles. 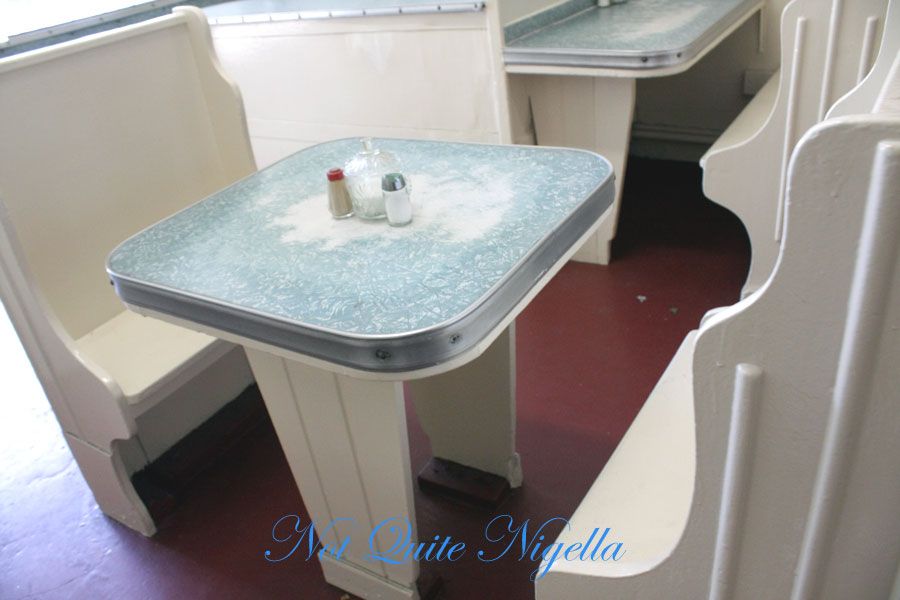 The service they provide is comparable to that of the Christian Charity soup kitchens that charge people for food. Katz says "How do you charge an alcoholic? Their priorities are going to be alcohol. The Oceanic offers a cheaper, more wholesome meal than what they'd get going to Matthew Talbot and it's probably at the same price."

As for the notoriously publicity shy duo, "People have approached them over the years to do a documentary and I think a documentary went into production but something stopped it and at the end of the day and mum is very resistant and now they're in their pattern and like to stick to that. She got quite sick last year and they thought that everything would change but she bounced back. " Indeed he has talked to them about going into the cafe and doing a report for the radio show and they're not interested. "The classic line was from the mum 'Jamie do you think we need any advertising at our age?' She was right of course." 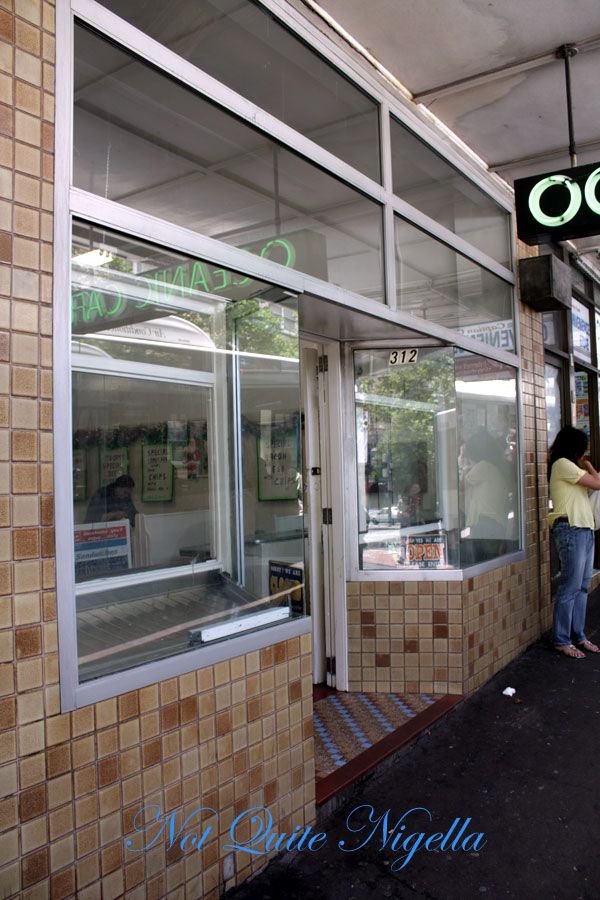 There's also the greater issue of whether they will be able to continue. Even people like Jay who know them well are close to them up to a point and he doesn't know if there's another generation to take over the cafe. Or whether they will survive the modernisation of Sydney where these wonderful cafes or buildings will be torn down disguised in the name of progress. There are so few of these places left and so many eager to tear them down. Which makes us wonder what the definition of progress really is.

Another Oceanic enthusiast, Andrew Gaynor, beautifully and evocatively recollects his visits to the Oceanic Cafe. "No-one seems to know the true history of the Oceanic and none who work there seem given to answering accurately when asked. Australia used to be full of such places, serving up those staples of (then) national cuisine, dishes like lamb chops, chips and peas, lambs fry, chips and peas, or rissoles, chips and peas. It was a time, now lost, when the agricultural still permeated the urban, making meals like this ubiquitous in Kalgoorlie and in Sydney, in Melbourne and Port Pirie, in Rockhampton and Willcannia. There are, of course, still places today where you can get similar food but they are few and far between and the premises themselves have changed through the years as their owners modernised to attract the increasingly fickle palate of a changing population, one that themselves now utilised new and fancy terms. Such as palate. Or cuisine." 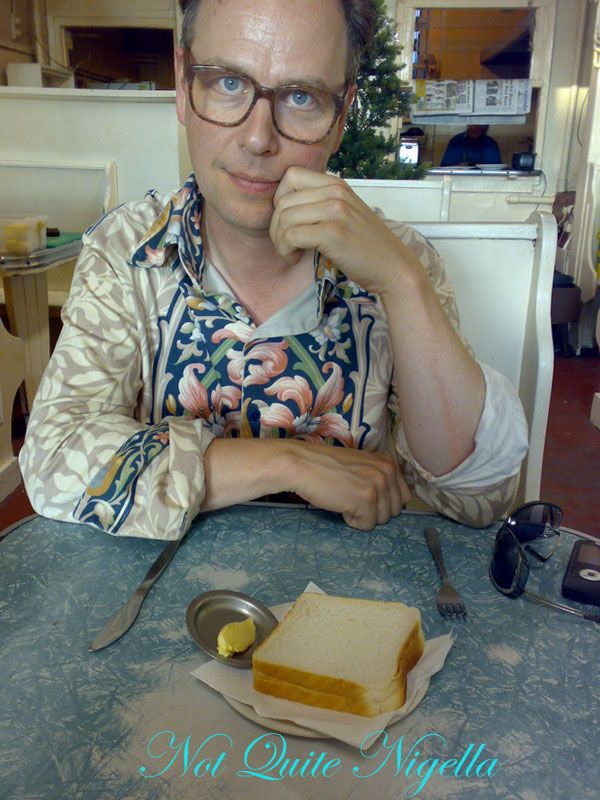 He affectionately recalls the decor "I first discovered the Oceanic in about 1980/81 in the heyday of Sydney's punk/new wave scene, when long-lamented nearby venues such as The Strawberry Hills Hotel and the Trade Union Club were twin foci for a vibrant music scene. Appropriately, this meant it was the late morning after a very heavy evening when we entered, each of us feeling like congealed grease. In hindsight, this made the Oceanic the perfect choice... All I remember was the waitress in her Coles-cafeteria uniform barking at our less-than-reverent demeanour (fair enough) and the size of the (fried) rump steak flapping hugely around the edges of the plate. Oh, and the free glass of orange cordial and two slabs of Tip-Top white. I definitely remember not finishing the meal as we curdled alongside the food."

"Fast forward a decade when I was then living in Perth and re-stumbled on the Oceanic on a return visit. Unchanged. Completely unchanged. Same old lady in the kitchen, same old lady in Coles-cafeteria uniform out front. Both as old as they'd first appeared (were they born old?). This time, I got the rissoles - and their taste has stayed with me to this day. Absolute old-school, crispy on outside, juicy sausage mince inside. Hand cut, chunky overcooked chips, peas, onion gravy, two slices of Tip Top. Heaven! (though no cordial this time...) Summonsing up the courage, I asked Coles-Cafeteria how long they'd been there. 'Forever', she barked before grumbling off. I lingered awhile watching scrub-faced country families fresh off the train at Central, smiling in recognition of the Oceanic's old world reality, observed individual diners (mostly male) dining quietly like a lonely Edward Hopper painting, and noticed shifty old-timers, hat dipped below one eye, sidling in from placing a bet, maybe having survived an encounter with a thug Razor Gang. In a place like the Oceanic, the 1930s still lives, colliding head-on with the present." 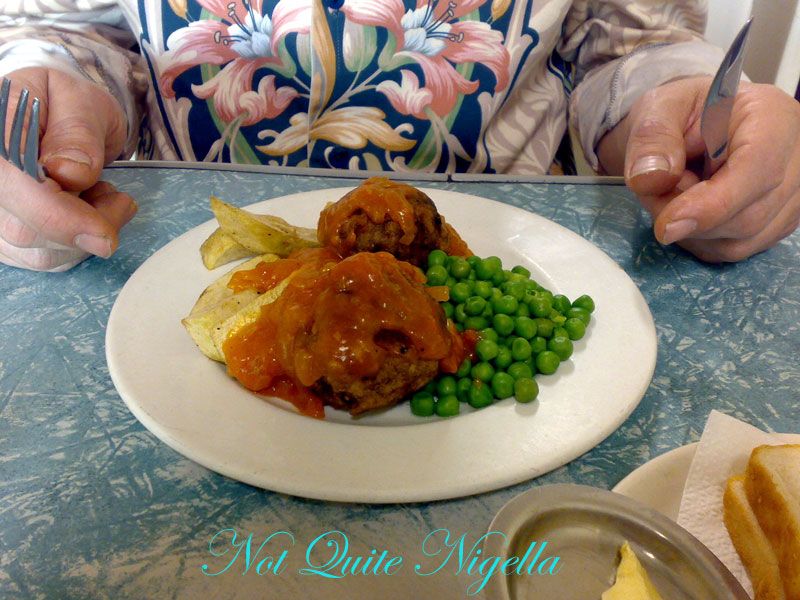 "Within the modest room some 10 metres deep and nary 5 wide, a small knee-high blackboard marks the forward boundary of three rows of booths whose ancient and over-painted timber bases bear the signature of 1920s café design. These custom built originals were spruced up in the 1950s with new Laminex tops, which themselves have become so worn that the initial green pattern now only exists at the edges, the central area being scraped back to white.Hand written disposable white-boards line one wall announcing each 'Special' meal, though of course, these 'Specials' never alter. Above this progressive menu runs a disciplined line of coat hooks, a continuous rank which once would have held many a gentleman's hat. At the end of the booths, a second dead neon announces 'Fresh Fish, Fish and Chips, Ready to Serve' from its position high on the wall over the hatch leading to kitchen, where a bag of spuds always lies open, waiting on peeling. And the smell of frying permeates your soul." 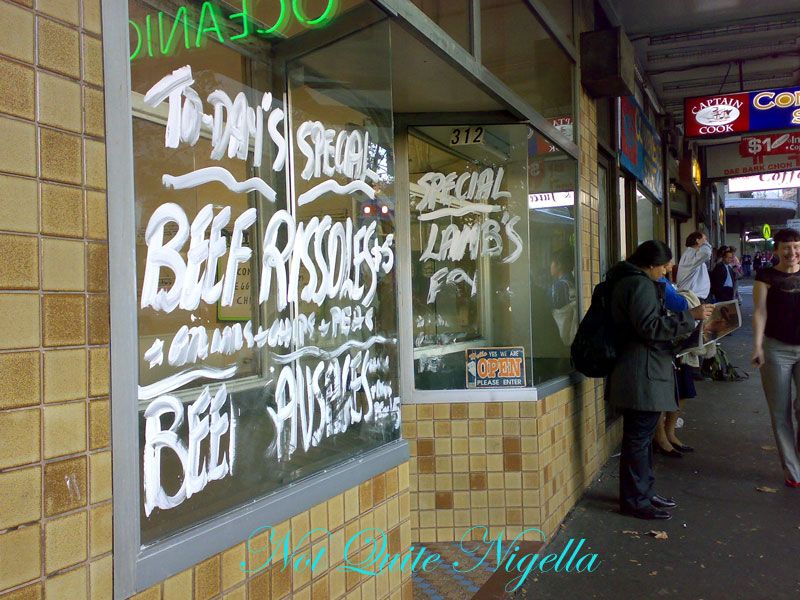 "The place is a survivor, a law unto itself, and all of us who enter do so accepting this cultural fact. The truism states that the past is a strange place and that they do things differently there. Thus, all who celebrate the Oceanic recognise and honour those rules. With gratitude, with nostalgia and with the somewhat shocked realisation that this wondrous greasy-spoon has remained so defiantly unchanged for so, so long."

Jay Katz can be heard on Radio FBI-FM

Andrew Gaynor is an Independent curator and writer, Melbourne 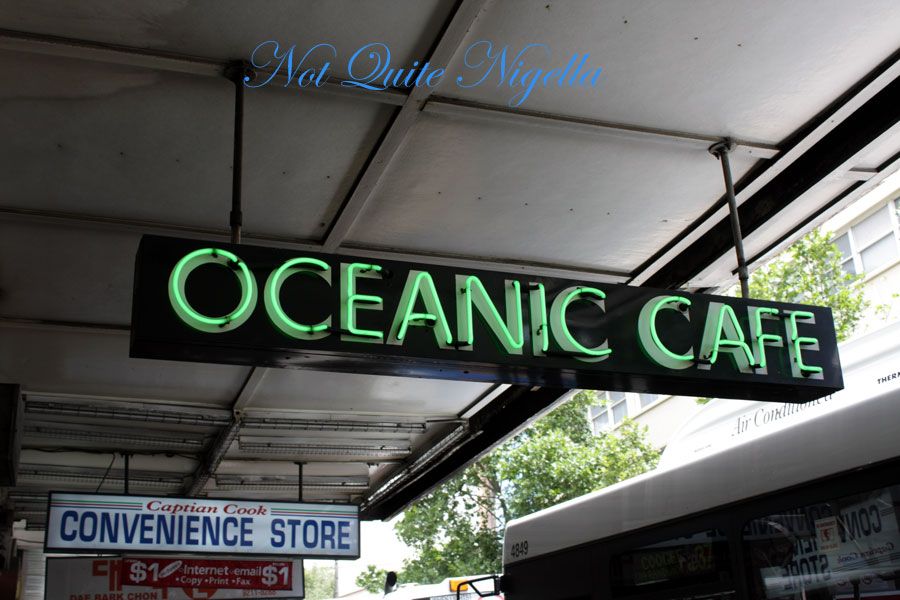