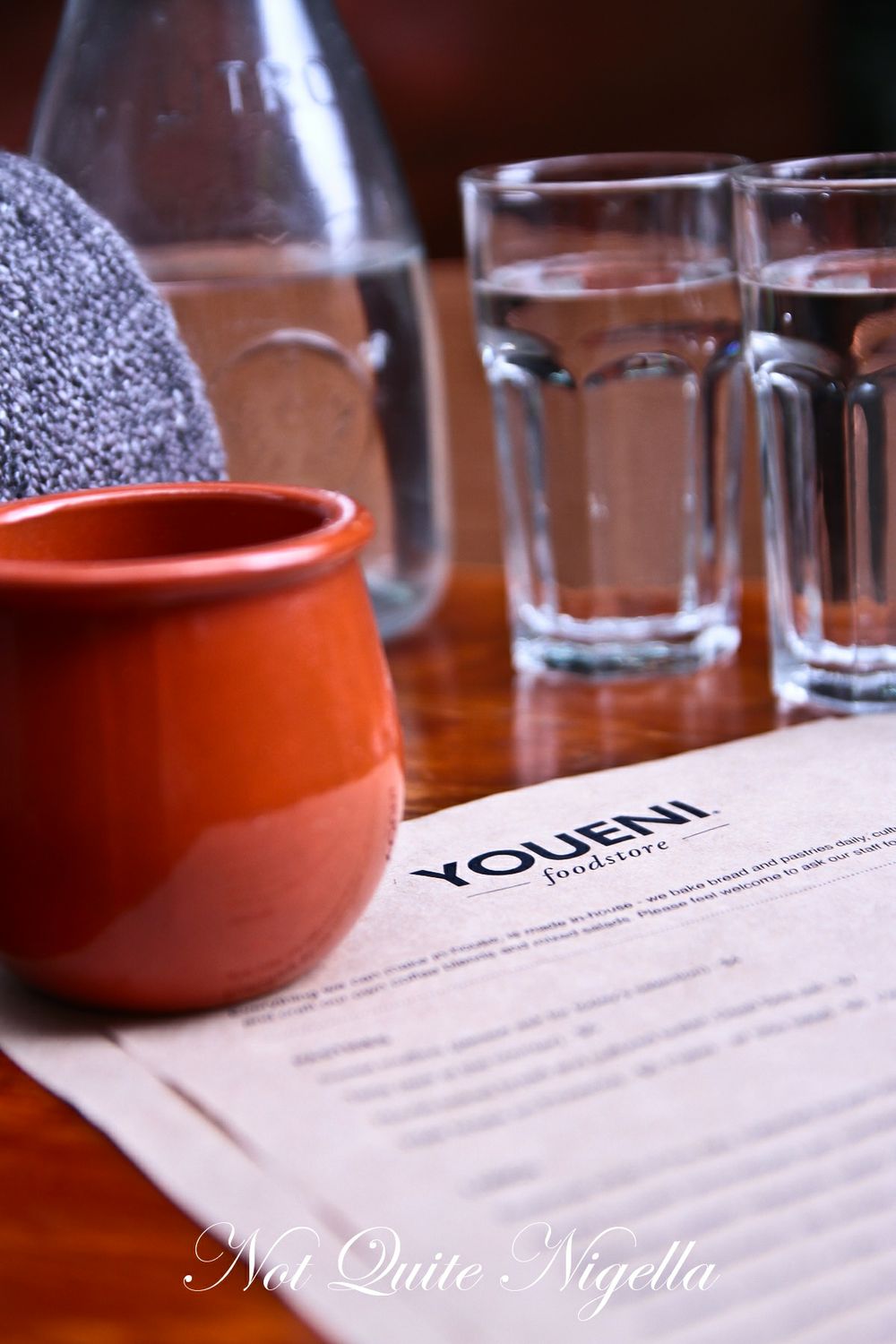 It was finally one of those days. A day that happens rarely but when they do you feel a bit less frazzled and hectic. It was one of those days where I seemed to arrive early everywhere rather than being late and rushing. I was even ahead of friend usually very on time Buxom Wench and Silver Fox and we were meeting at Youeni in Surry Hills. 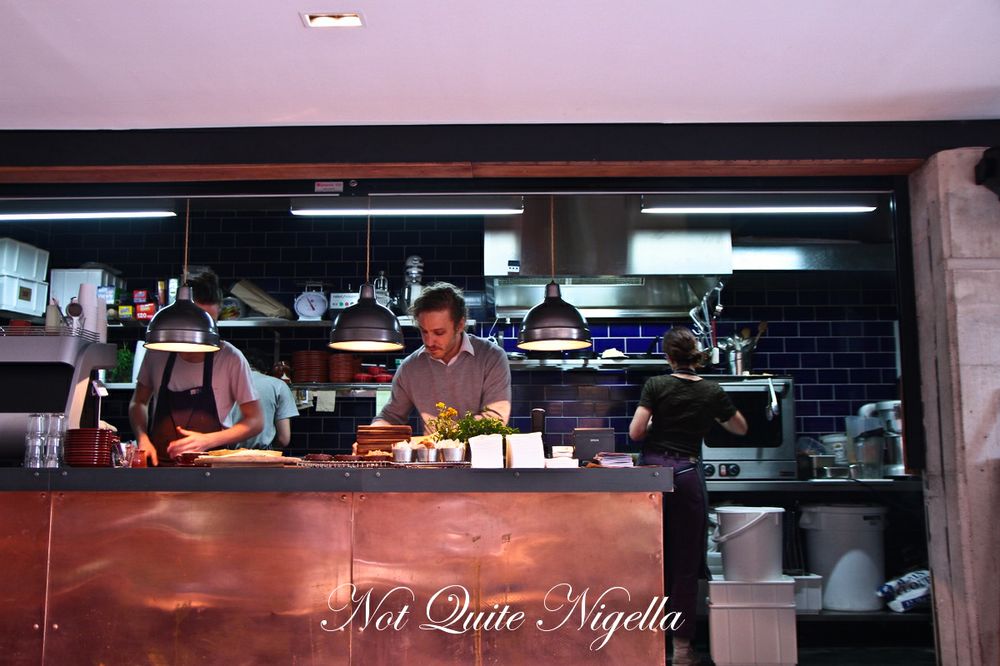 One of the reasons why I like hanging out with Buxom Wench is that she is unfailingly honest and has no airs or pretensions. She told me point blank that she thought that Youeni was pronounced "you-enny" and that it was a Greek restaurant. It is in fact a play on "you and I." There are two branches of Youeni, one in Darlinghurst and one in Surry Hills and we are at the latter one. Well, at least I think so. Buxom Wench had accidentally texted me the address of 9 Hill Street but it is actually 8 Hill Street which is an office and shop complex. However, when you look at the building directory listing, Youeni doesn't appear on it and there is no sign in front of the cafe with its name. The telltale clue? The boxes of produce on sale outside. 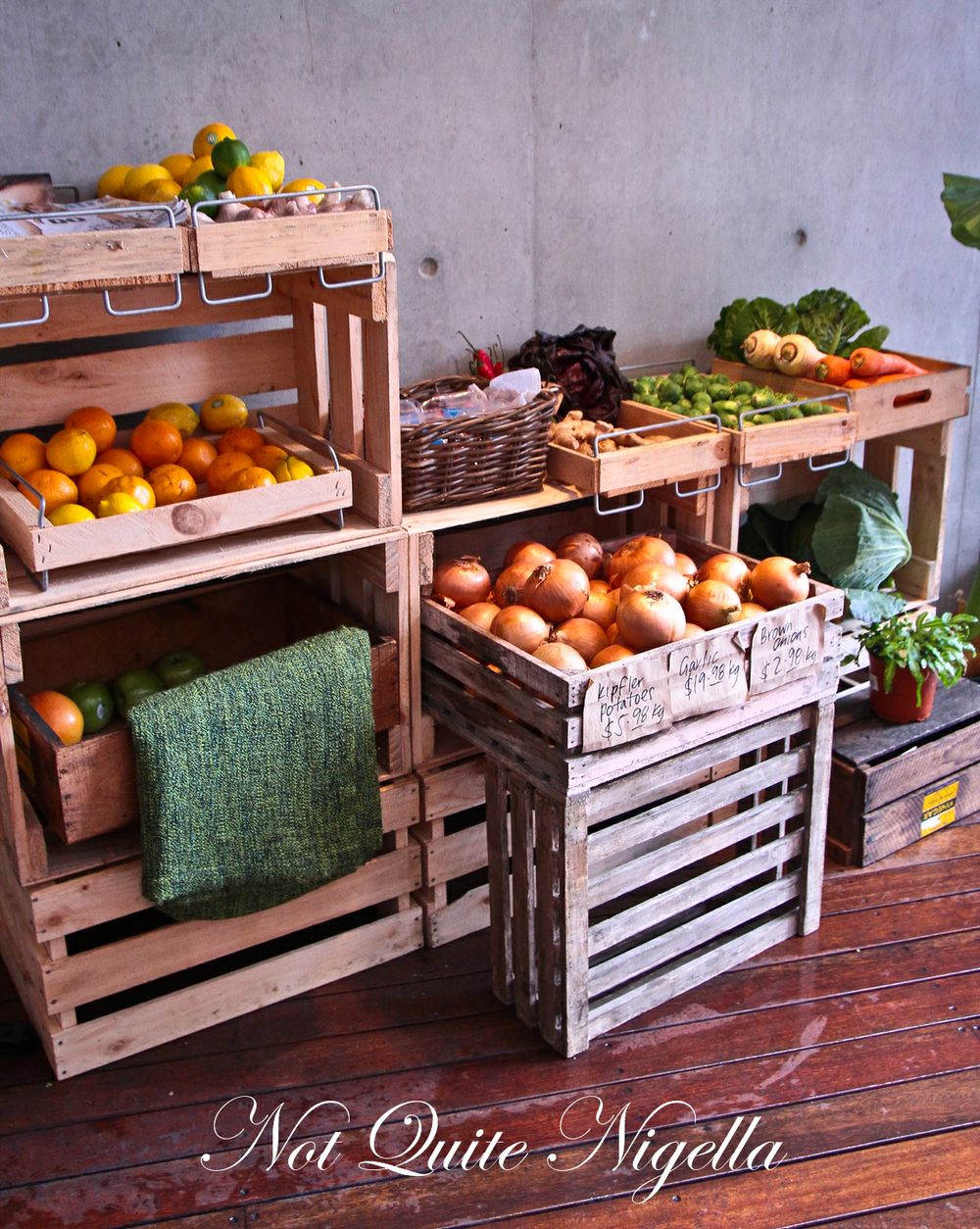 Originally started as a food store in Darlinghurst two years ago, both locations have started serving food and the Surry Hills one, a tiny 15 seater when it rains or 40 seater when it is sunny, has just been discovered by many. The menu is simple and very reasonably priced and changes daily. They make everything from scratch in their Surry Hills production kitchen including the bread and butter. There are no microwaves here. Diners face into the open kitchen where trays of sweet baked goodies sit.

Blankets are provided on the tables for diners and I take a seat underneath the heat lamp. I ask for some recommendations while waiting for Buxom Wench and Silver Fox to arrive. They're the kind of delightfully easygoing friends that say "just order for us and we'll eat whatever you order" :) And given the fact that the owner and chef Chris Starke was formerly a pastry chef at Marque, we figure we're in safe hands. And it has to be said that the service here is wonderfully friendly and genuine. 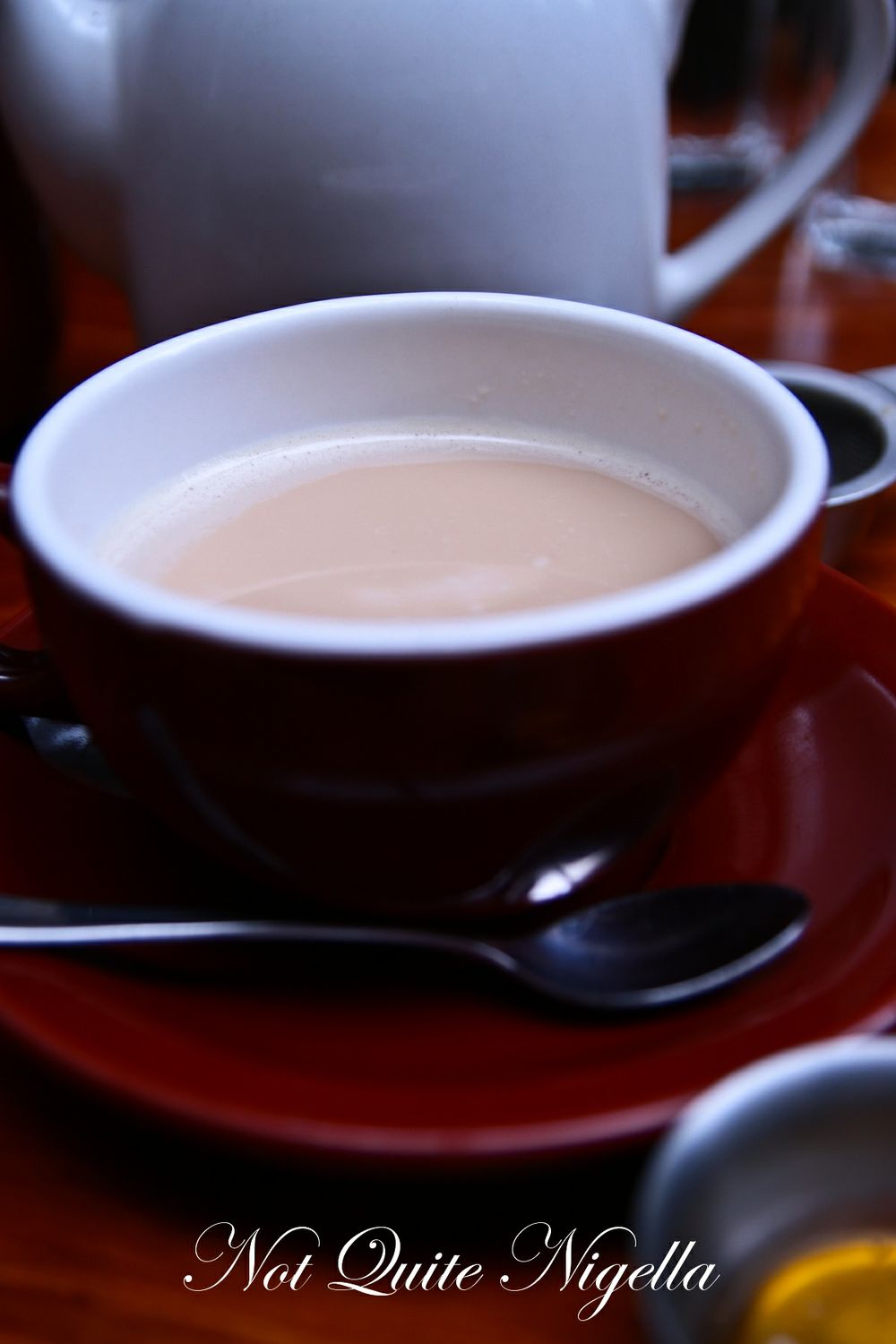 I start with a soy chai with honey and it's already slightly sweetened with honey but a small container of it is also provided. It's milky and with a good amount of spice, particularly clove and there is plenty of it in the teapot. However as we knew that food was coming, I needed to drink quickly to make room for the food on the tables which are small in size. 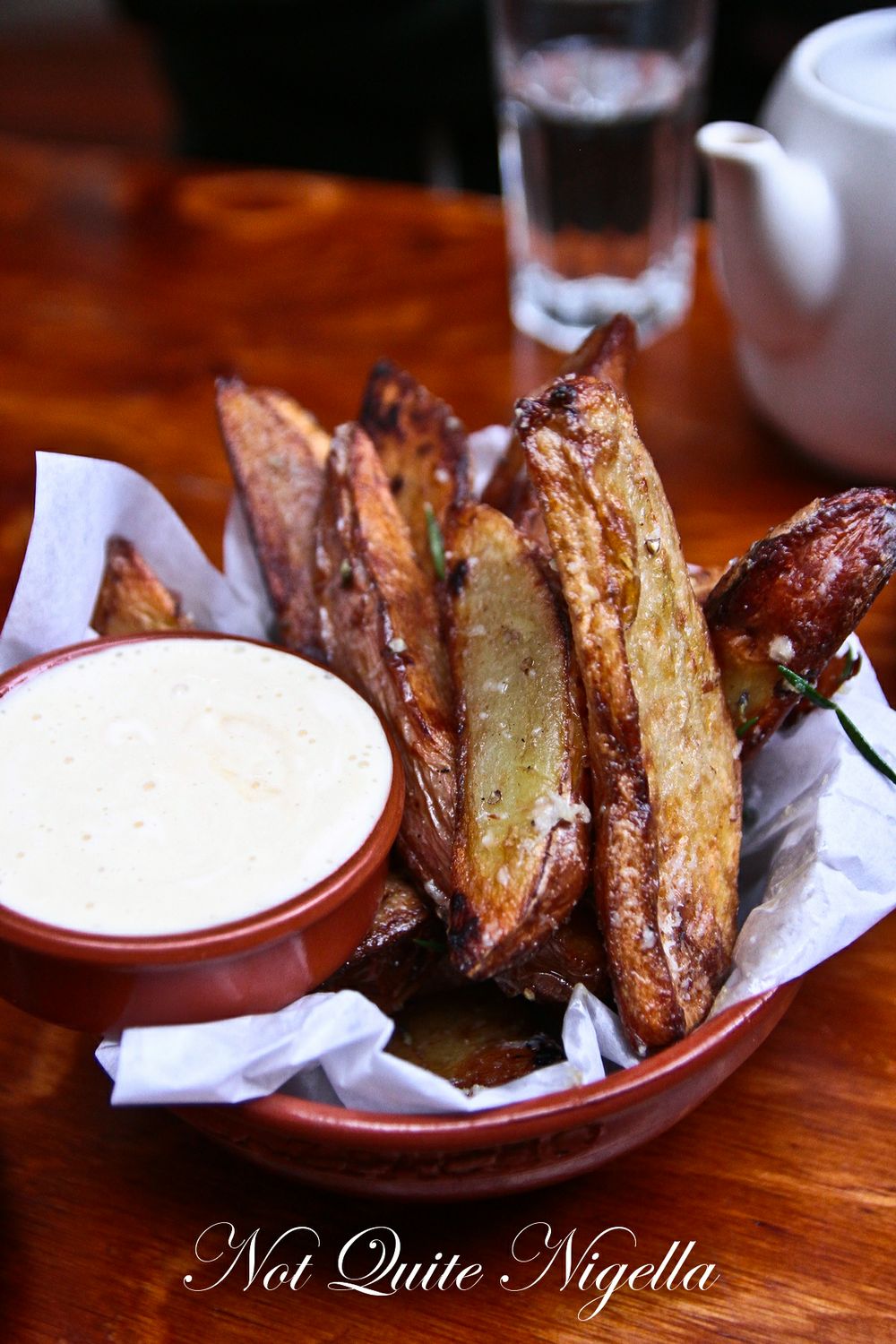 Hand cut and crispy, these roasted potato wedges come salted and fragranced with baked rosemary needles. The sweet chilli mayonnaise is a good dipping sauce to go with it. 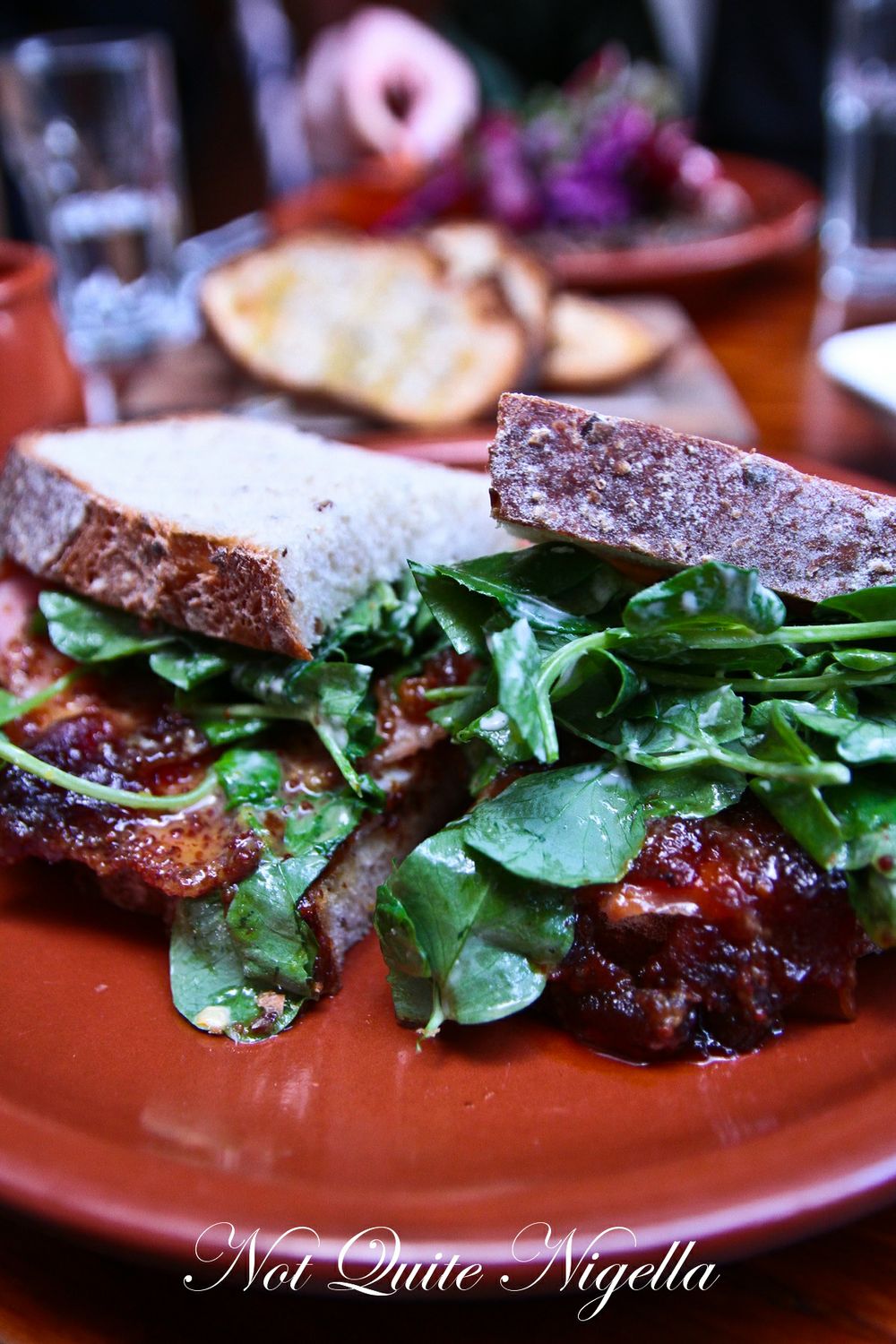 Buxom Wench can be bossy at times, all well meaning mind you. She tells them "you should make sourdough" as they explain that their bread is not a sourdough but a wholegrain loaf. She soon retracts that statement admitting that the house baked bread is very good indeed and that no switch to sourdough is necessary. This sandwich is pure Christmas with a sweet honey mustard caramelised ham which is served hot on their house made grain bread. There's caramelised apple, tarragon mayo, fresh horseradish and dressed watercress. It takes me straight back to last year's Christmas where we enjoyed similar sandwiches with our thick slices of Christmas spiced ham and the sweetness of the ham and apple is a nice pairing with the peppery watercress. 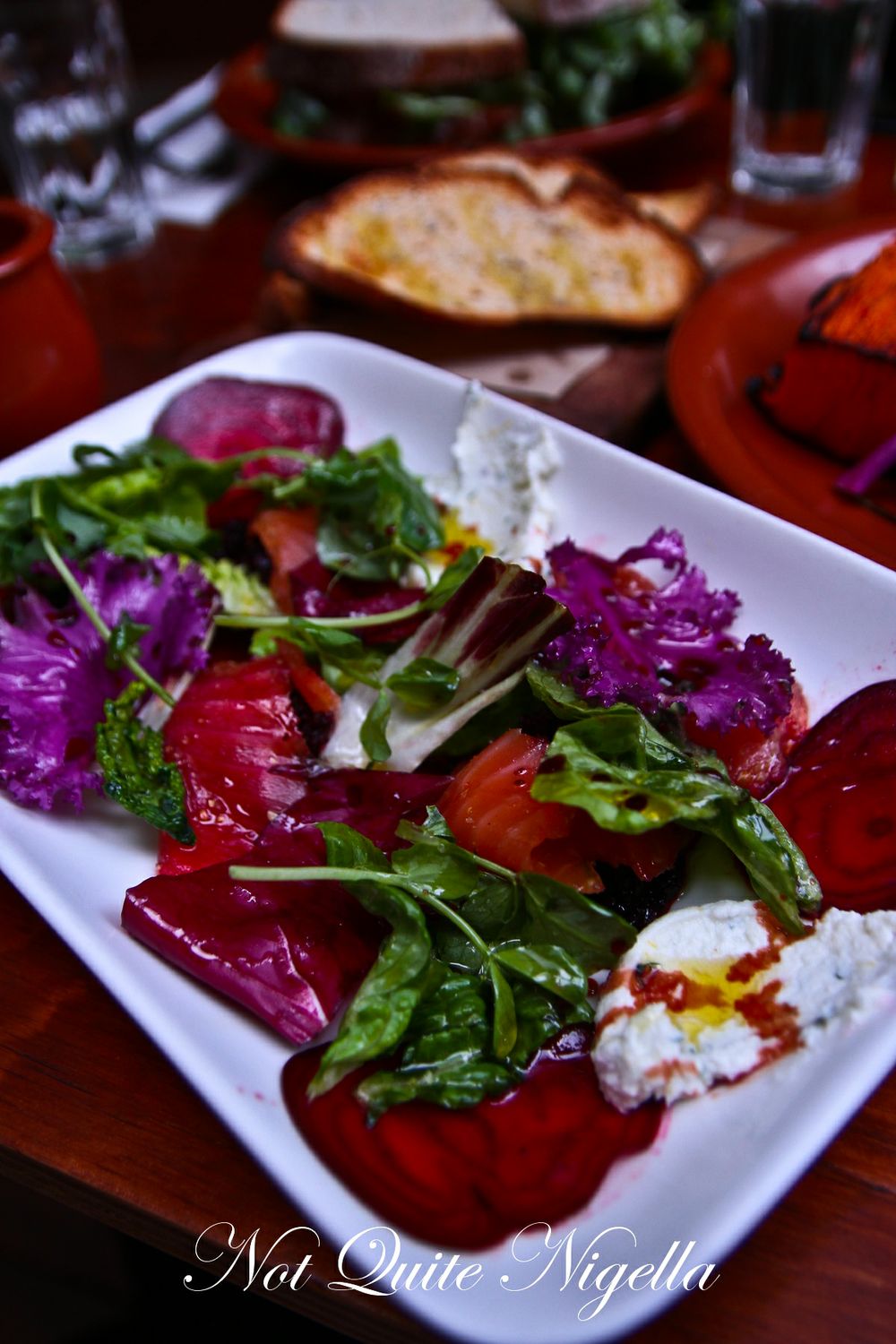 Almost too pretty to eat, the house cured king salmon comes in slices on a  colourful bed of baby cos, thinly sliced beetroot and red kale salad. There is also herbed goats cheese and three slices of thin melba toasts. The flavour is fresh and well balanced with a satisfying crunch from the toast. 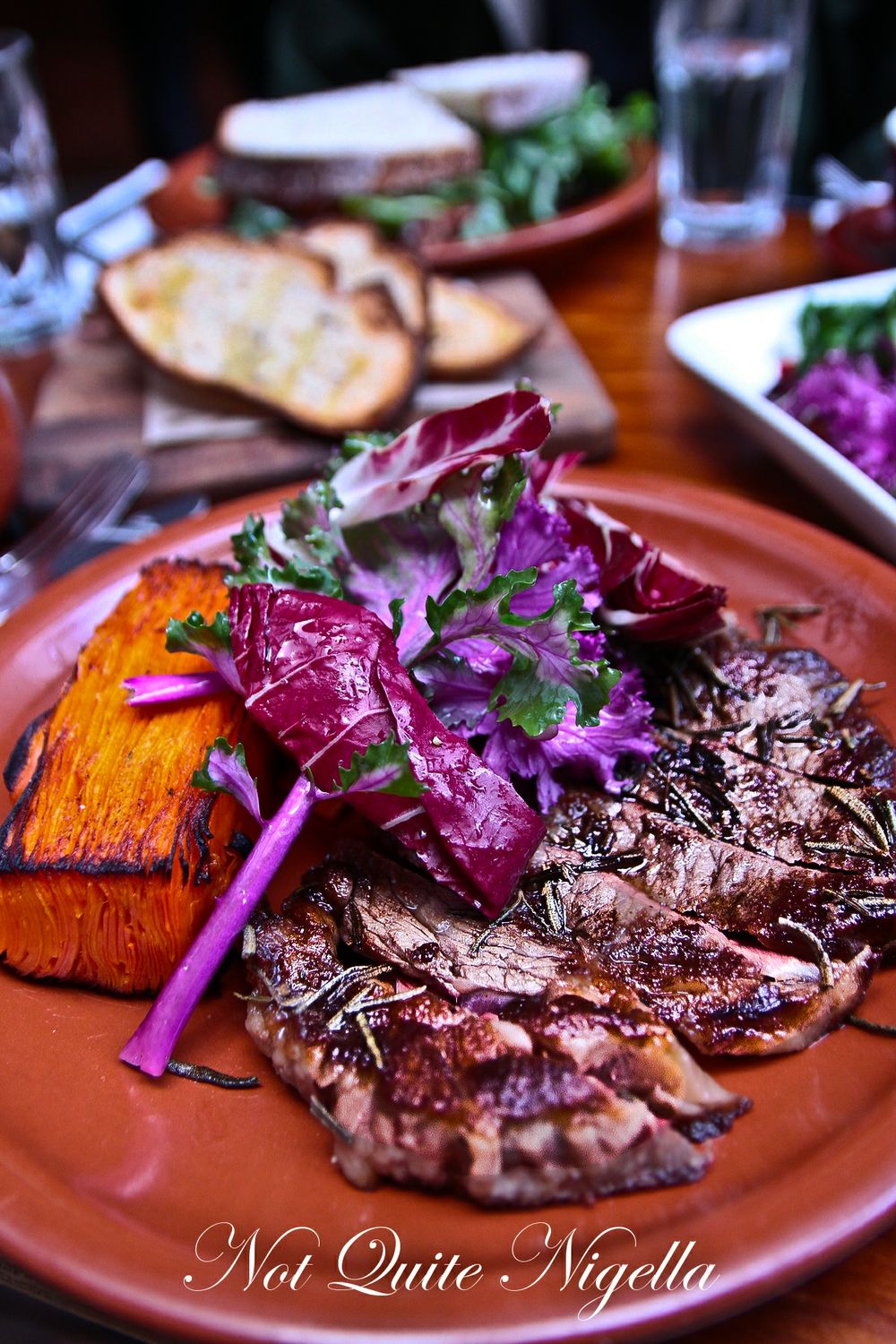 Our last main was the Angus scotch fillet which was cooked medium rare. It was paired up with a neat rectangle of carrot dauphinoise which gives it a fine dining touch. There is also rosemary beurre noisette (nut butter) and a salad of bitter leaves and kale. The steak is juicy and the carrot dauphinoise is sweet and a nice pairing with it instead of the usual potato dauphinoise.  And the last time I made a dauphinoise like this, it took  me ages so I appreciate the time that it must have taken. 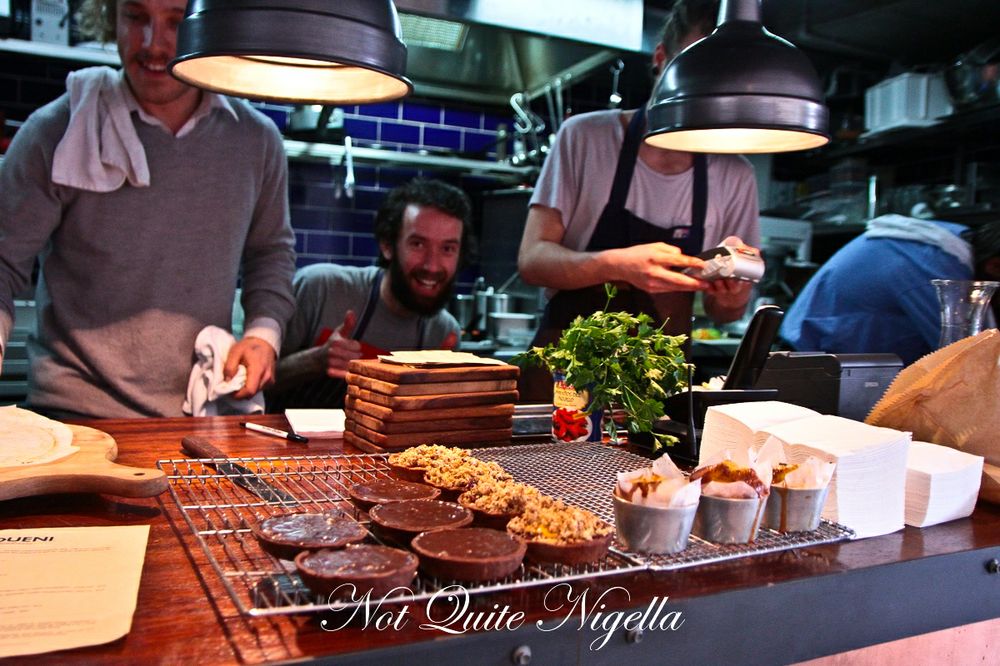 And when you go to have a look at the sweets display, chef Chris Starke may photobomb your photo!

Dessert time and again Buxom Wench and Silver Fox who are such dream dining companions suggest that we try all three of the three sweets despite the fact that we were very full. We also spy a roasted vegetable salad going to the girl at the table next to us and they even suggest "maybe we should order that now?" 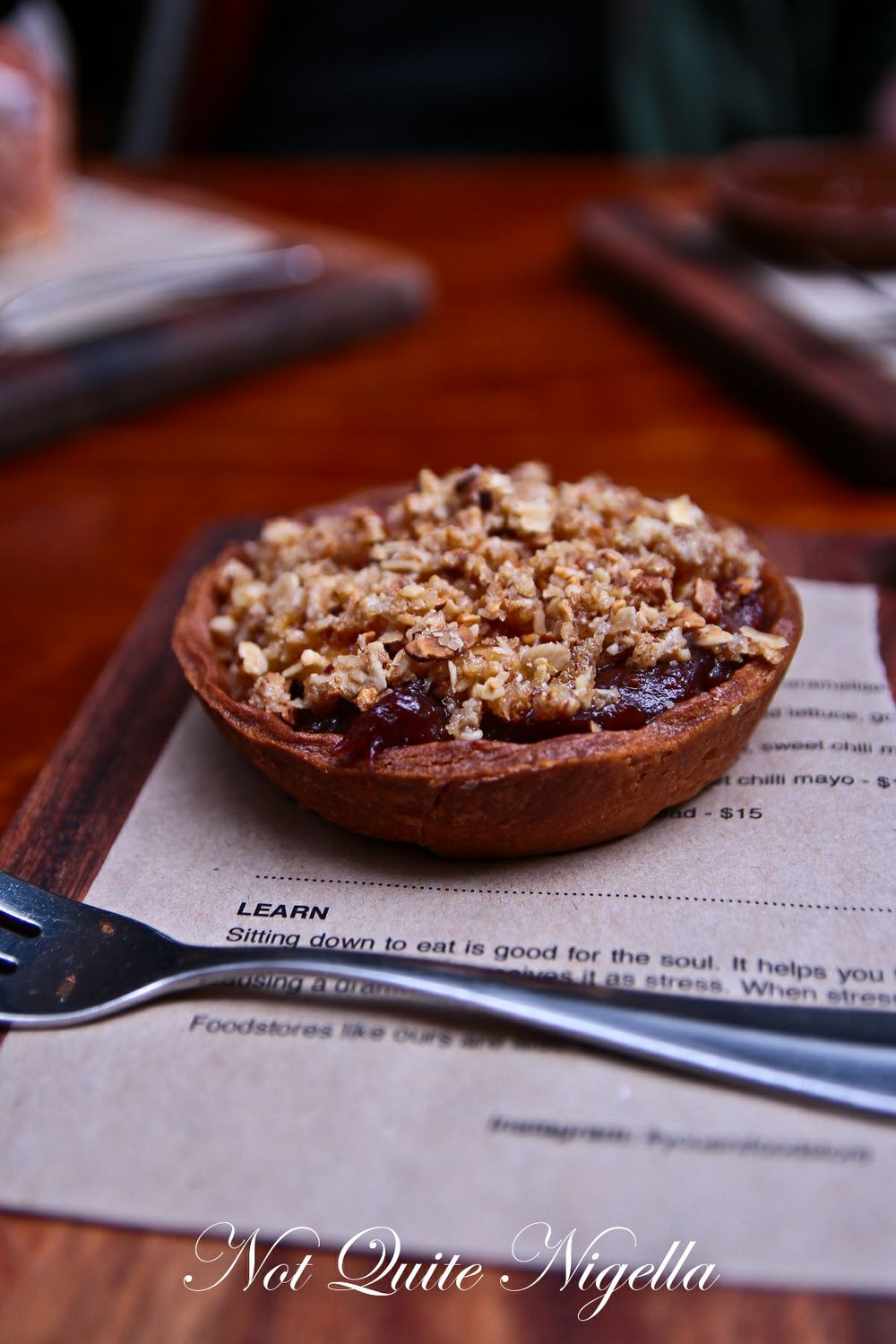 The rhubarb and ginger tart is stopped with a crumble topping. Inside the dark baked pastry case is sweet rhubarb, apple and ginger as well as a layer of creme patissiere or vanilla custard underneath the crunchy crumble top. I can imagine this served hot with some vanilla ice cream. 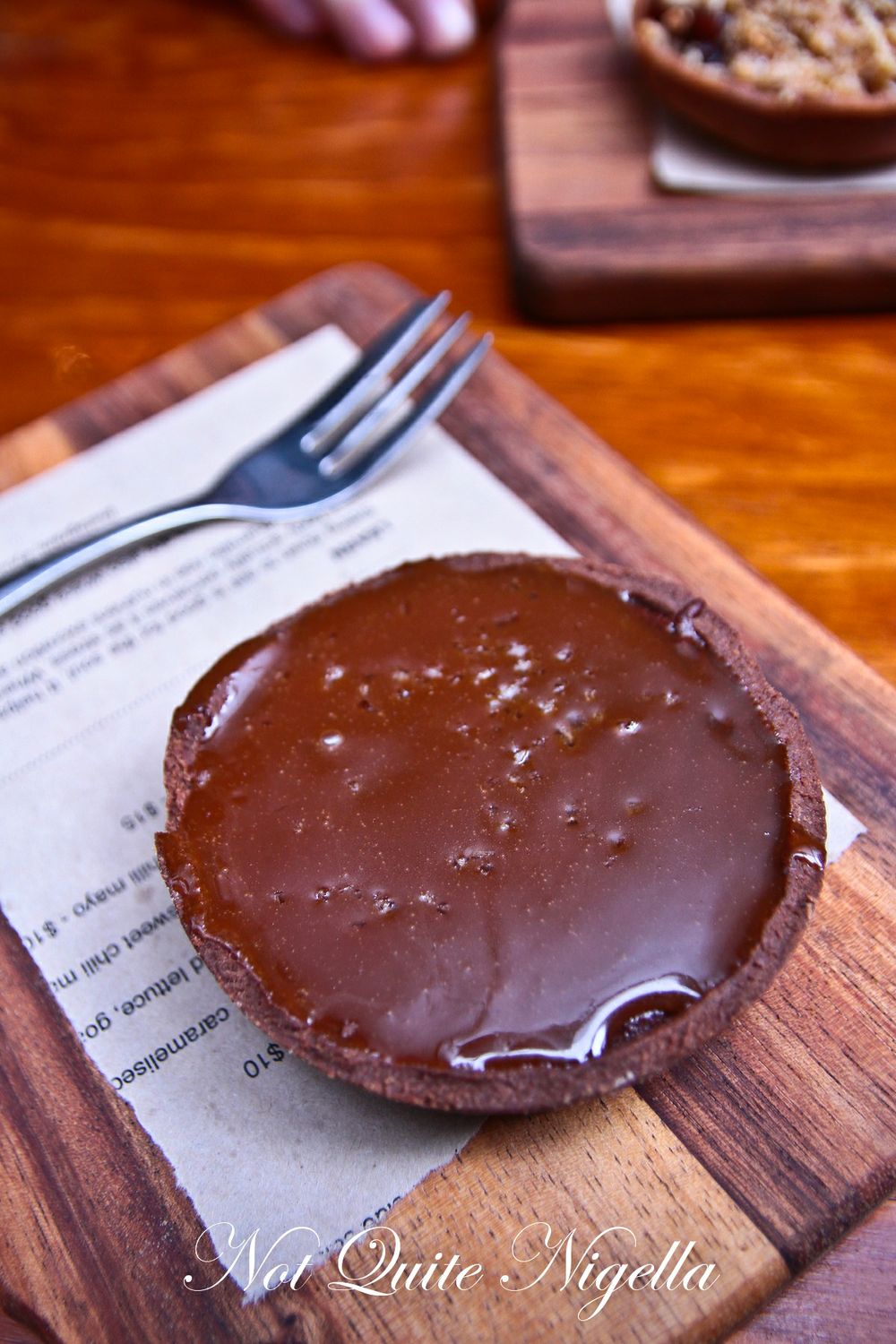 The chocolate and salted caramel tart was a bit too dark and a bit too salted for all of us. The filling was a dark chocolate ganache and on top was a glossy layer of salted caramel. It would have been ideal if there was less salt on the caramel. 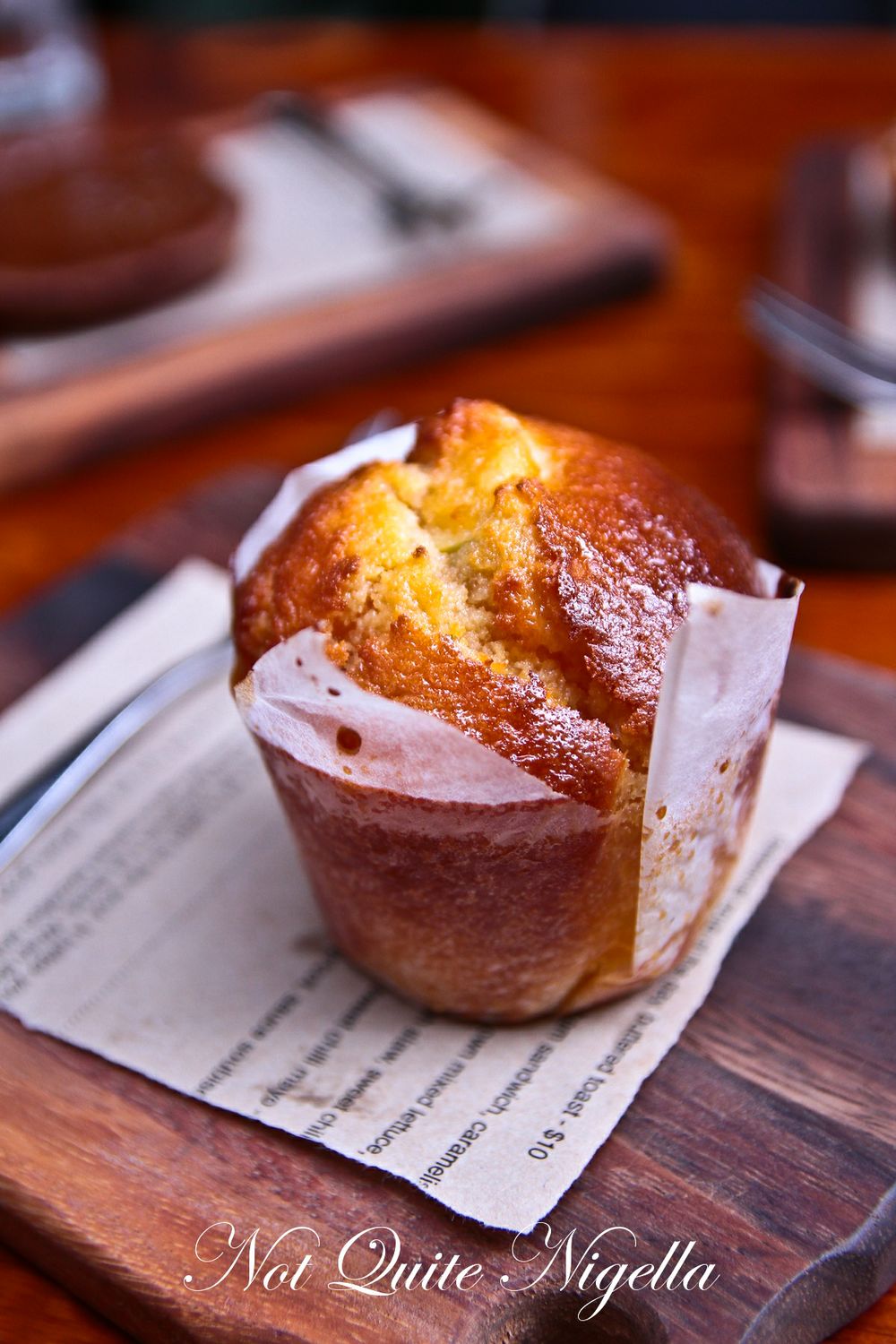 I'm usually not much of a muffin person but this one is very moist and fresh with a nice, light crust on the top. In fact I think I ate half of the muffin! But Buxom Wench and Silver Fox are good friends and they either didn't notice or didn't mind.

So tell me Dear Reader, how often do you share dishes with others and do you or your friends get particular about dividing shared meals up evenly? Or is everyone easygoing about it? And would you ever let someone else order for you? 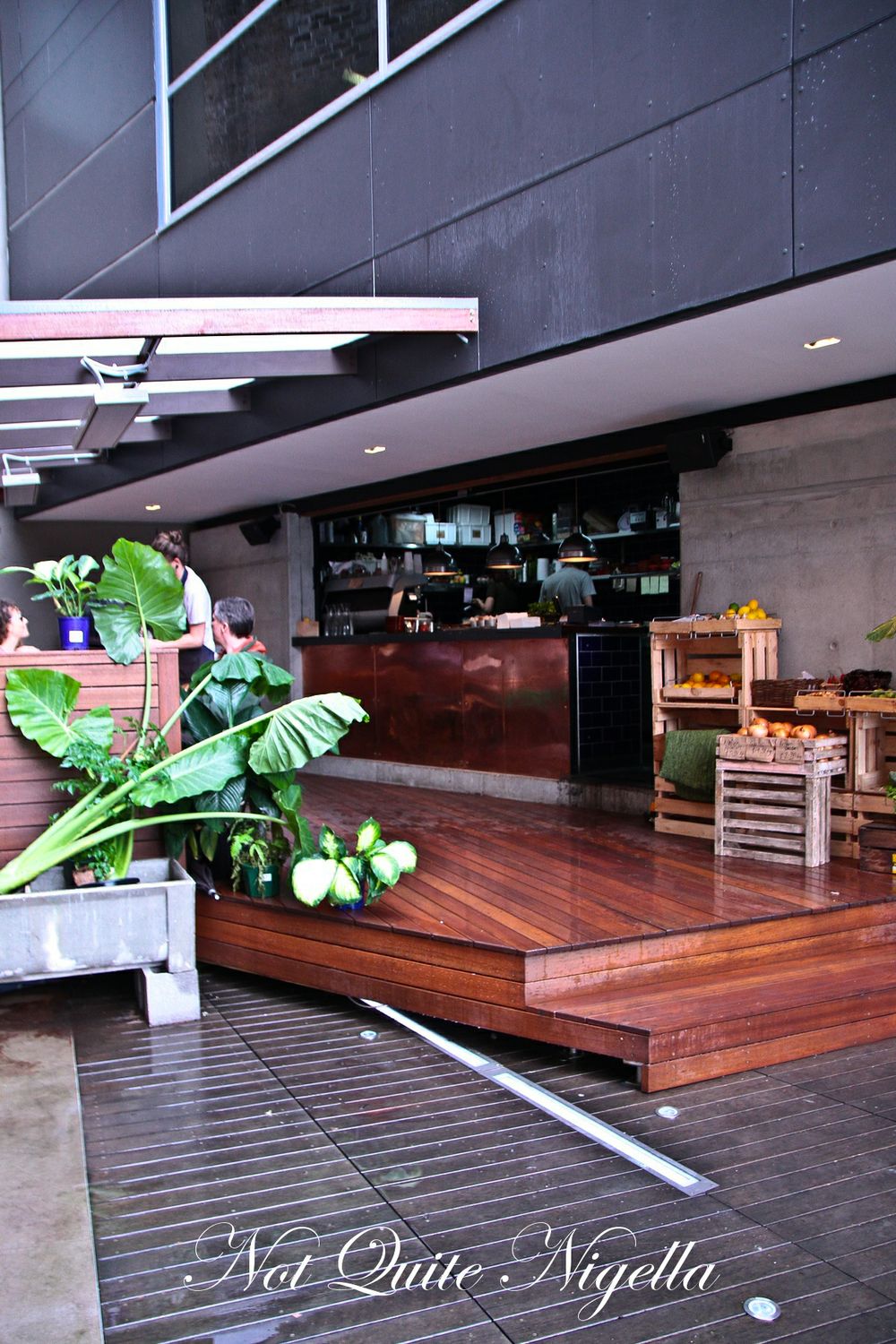