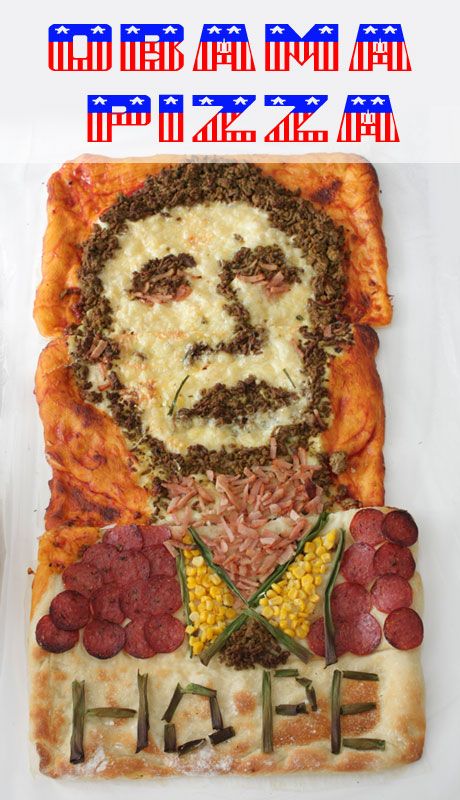 Firstly, please don't laugh at my effort. OK you can as I'm not with you. I'm not American as you may know but I am incredibly excited about the upcoming inauguration and the Presidency of Barack Obama. Just because we can't vote and don't live in the country doesn't mean that the significance and magnitude of this event is lost on people throughout the world. I was so excited that I wanted to do something to commemorate it and of course the best way I know how it by making food.

My husband, the brilliant ideas man (who also came up with the idea of a Pocky forest) came up with this idea. I ruminated over it for ages. How would it work? I'm terrible at drawing real people, only being able to drawn cartoon like version of people and I didn't want it to be silly or a joke. So after contemplating it for a while, I decided to give it a go. Even if it didn't work out, it would still be edible. 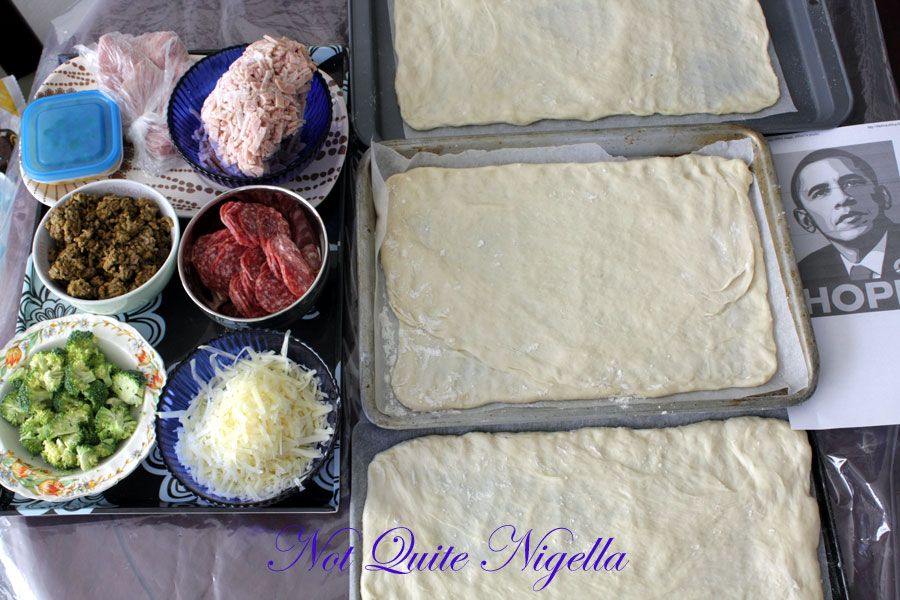 I knew which picture I wanted to use, street artist Shepard Fairey's famous Hope poster. After all it was a fantastic poster and shaded in well so it seemed to do the job. I should mention in google searching it I also saw a "Dope" poster for George W. Bush and a "Nope" poster for John McCain. I would've used ricotta cheese for John Mc Cain's hair I think. 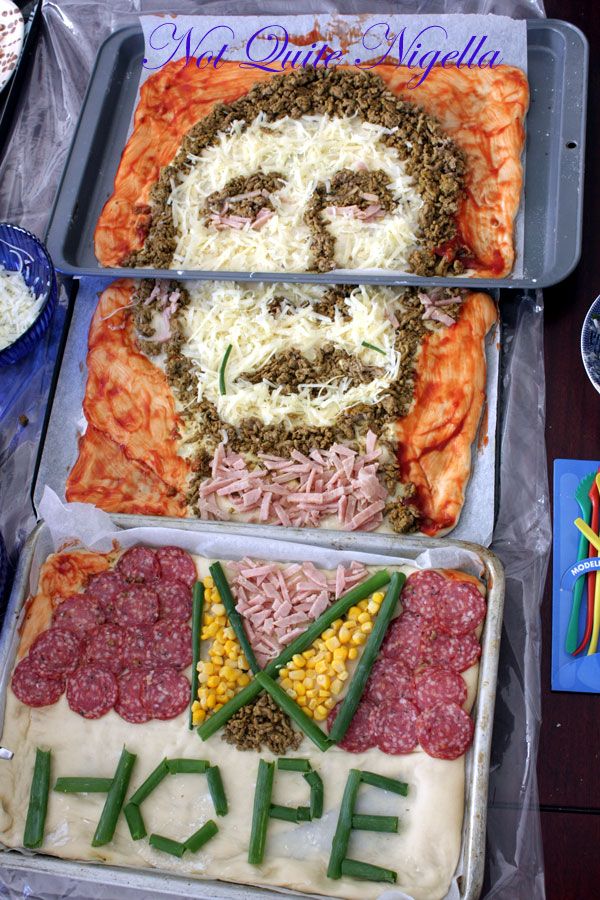 Believe me when I say that I am no artist (that much is obvious). So I did what anyone else would have done in this situation and called my parents in a frantic state. My dad is a portrait painter so I knew that he would be able to steer me in the right direction shape wise. And like all good parents do, they hopped in the car and came over (my dad not even complaining once about having to cross the dreaded Sydney Harbour Bridge-he must've sensed the desperation). Using a copy of the picture, my dad initially "sketched" the outline and we filled it in with the assortment of toppings I had ready in bowls. 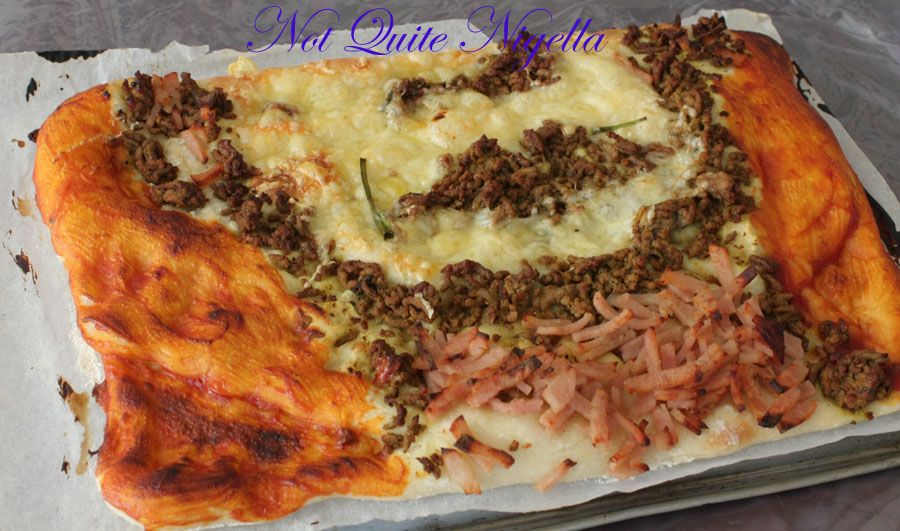 The first section out of the oven

I can't say that we will be winning any awards for our efforts, in fact I think it looks more like a cross between Barack Obama and Abraham Lincoln, but I like to think that we did our very best (and I'm still not sure what happened to his right ear). It's a little hard to do skin tones (i thought the cheese might melt to a more golden brown shade) and shadows with just one type of cheese too and if you've ever wondered how hard it is to render someone in a pizza, let me assure you that it's very hard indeed! So Barack and Michelle, I hope you can forgive what we've done to Barack and take the spirit and enthusiasm we felt instead.

And I don't usually do this but Not Quite Nigella has been nominated in two categories for Well Fed Network's awards! Thankyou so much for the wonderful people that nominated me :) And if you would like to vote you can do so on:

P.S. As well as the wonderful blogs that have linked to me, the Sydney Morning Herald also featured my Obama Pizza on their homepage and in a gallery! 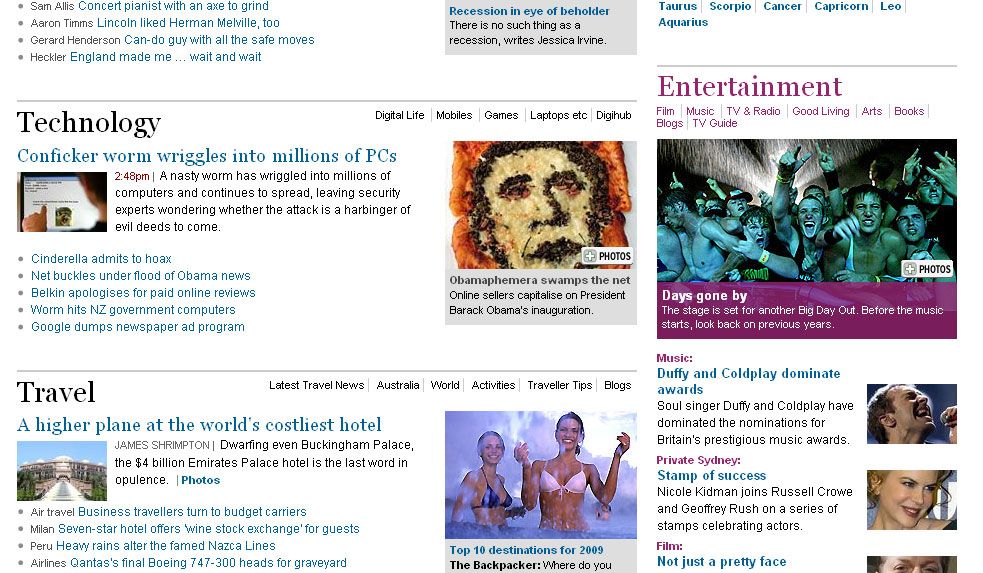 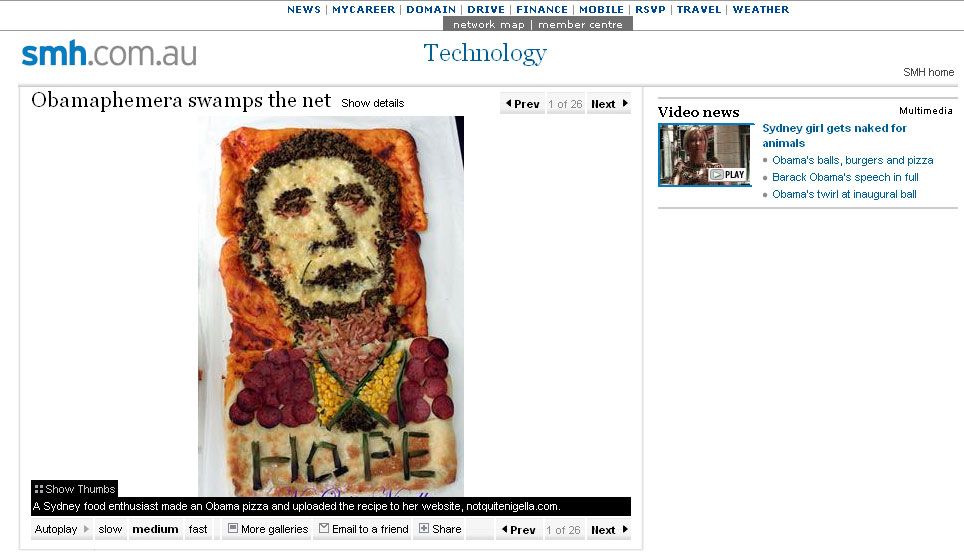 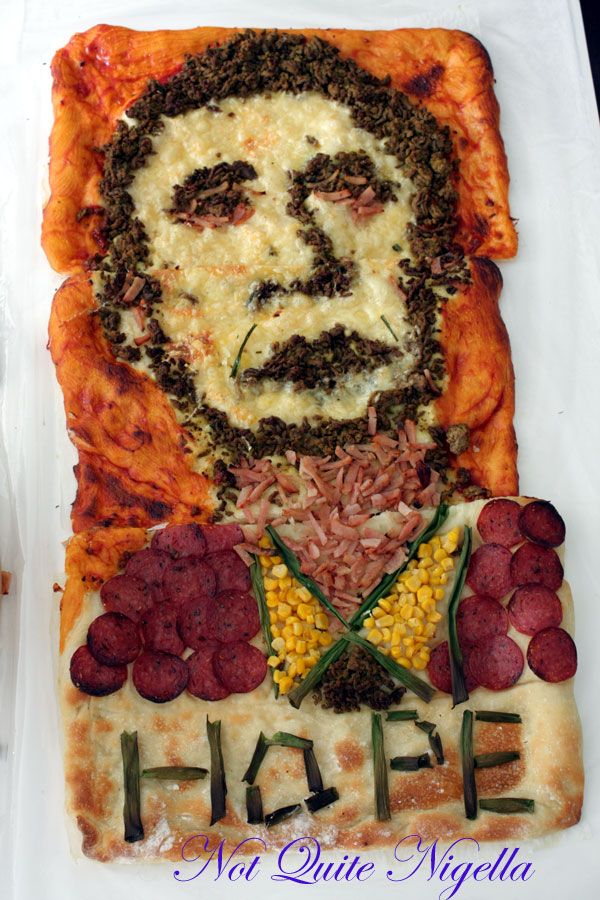 The following instructions are for a home based oven ie.e one where the whole pizza needs to be broken up into 3 parts. If you somehow have access to a giant pizza oven and a giant turner then all the easier.

Step 1 - Mix together the flour, salt and instant yeast in a big bowl (or in the bowl of your stand mixer). Place in fridge to chill.

Step 2 - Add the oil, sugar and cold water and mix well (with the help of a large wooden spoon or with the paddle attachment, on low speed) in order to form a sticky ball of dough. If you are using an electric mixer, switch to the dough hook and mix on medium speed for about 5 minutes.The dough should clear the sides of the bowl but stick to the bottom of the bowl. If the dough is too wet, sprinkle in a little more flour, so that it clears the sides. If, on the contrary, it clears the bottom of the bowl, dribble in a teaspoon or two of cold water. The finished dough should be springy, elastic, and sticky, not just tacky, and register 50°-55° F/10°-13° C.

Step 3 - Flour a work surface or counter. Line a large container (with a lid) with baking paper/parchment on the bottom and side. Lightly oil the paper.

Step 4 - With the help of a metal or plastic dough scraper, cut the dough into 3 equal pieces. To avoid the dough from sticking to the scraper, dip the scraper into water between cuts.

Step 5 - Sprinkle some flour over the dough. Make sure your hands are dry and then flour them. Gently round each piece into a ball. If the dough sticks to your hands, then dip your hands into the flour again.

Step 6 - Transfer the dough balls to the container and brush the tops with oil. Place lid on container.

Step 7 - Put the container into the refrigerator and let the dough rest overnight or for up to thee days.

Step 8 - On the day you plan to eat pizza, an hour or two before you make it, remove all 6 balls from the refrigerator. After 2 hours, dust the counter with flour. Hvae your baking tray with baking parchment or pizza stone ready. Take a ball and place on a floured surface and sprinkle them with flour. Dust your hands with flour on all sides (even the backs of your hands). Shape the dough into the shape of the rectangualr baking sheet. The dough may want to spring back into place in whcih case rest it for 5-10 minutes before stretching it a bit further (gently, don't break it) until it reaches the edges of the baking tray.

Step 9 - Repeat with the remaining 2 dough balls for the next 2 trays so that you have a total of 3 bases. Preheat the oven to 220° C 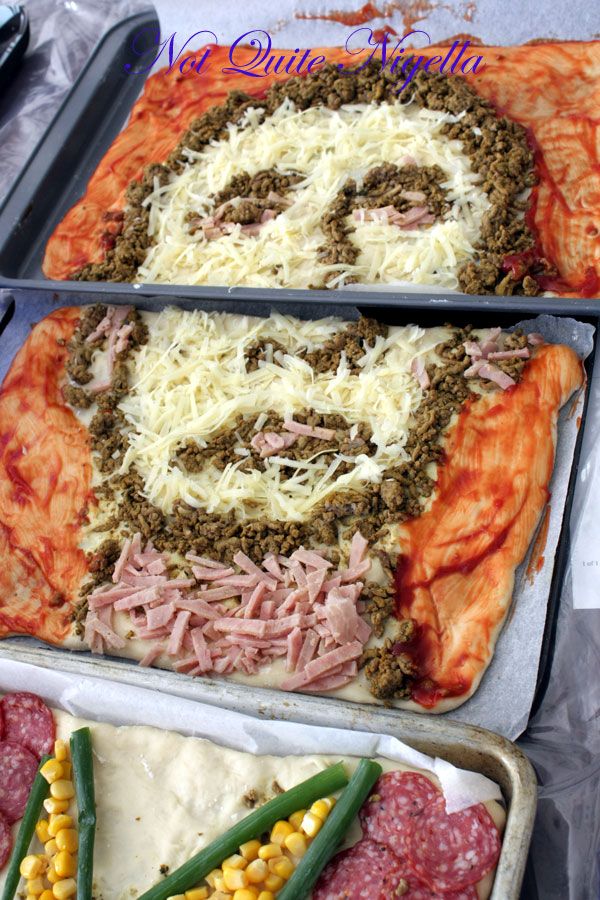 Step 10 - Have all of your toppings ready. Using a modelling tool or a bluntish knife like a butter knife as opposed to your sharpest knife, trace the picture of Obama (using a black and white copy and dividing the image into 3 is easiest). I used a mix of grated cheese for skin, minced beef for hair and outline, pepperoni for the jacket, sliced ham for accents, corn for a tie and spring onions for the word "HOPE" and dimples. I also painted the background with tomato pizza sauce and a brush.

Step 12 - Remove from oven and allow to cool slightly. Line each third up against each other-you may need to trim the edges of the pizzas so that they line up. Also I found that doing it in thirds meant that proportions were slightly wrong so we trimmed the pizza so that his face wasn't as long. Enjoy! 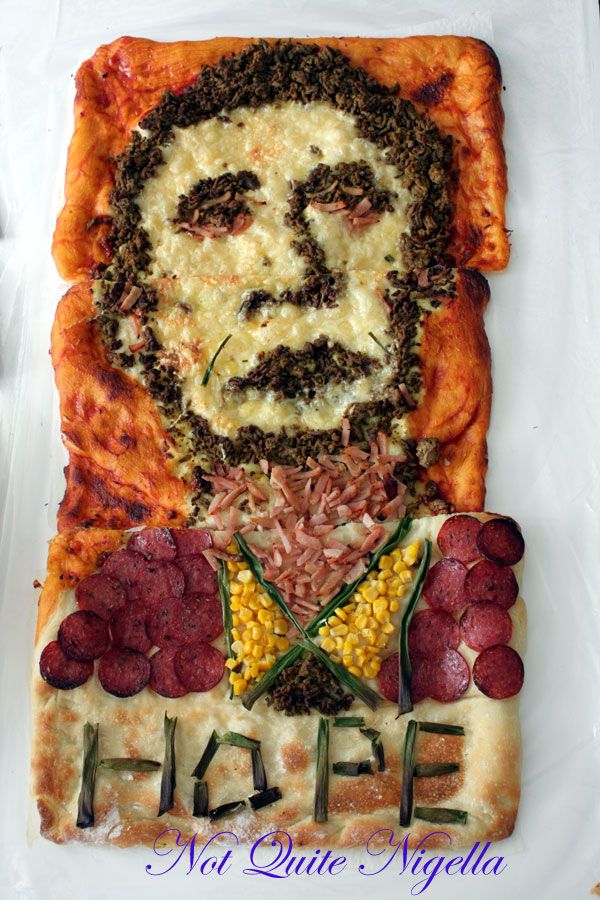