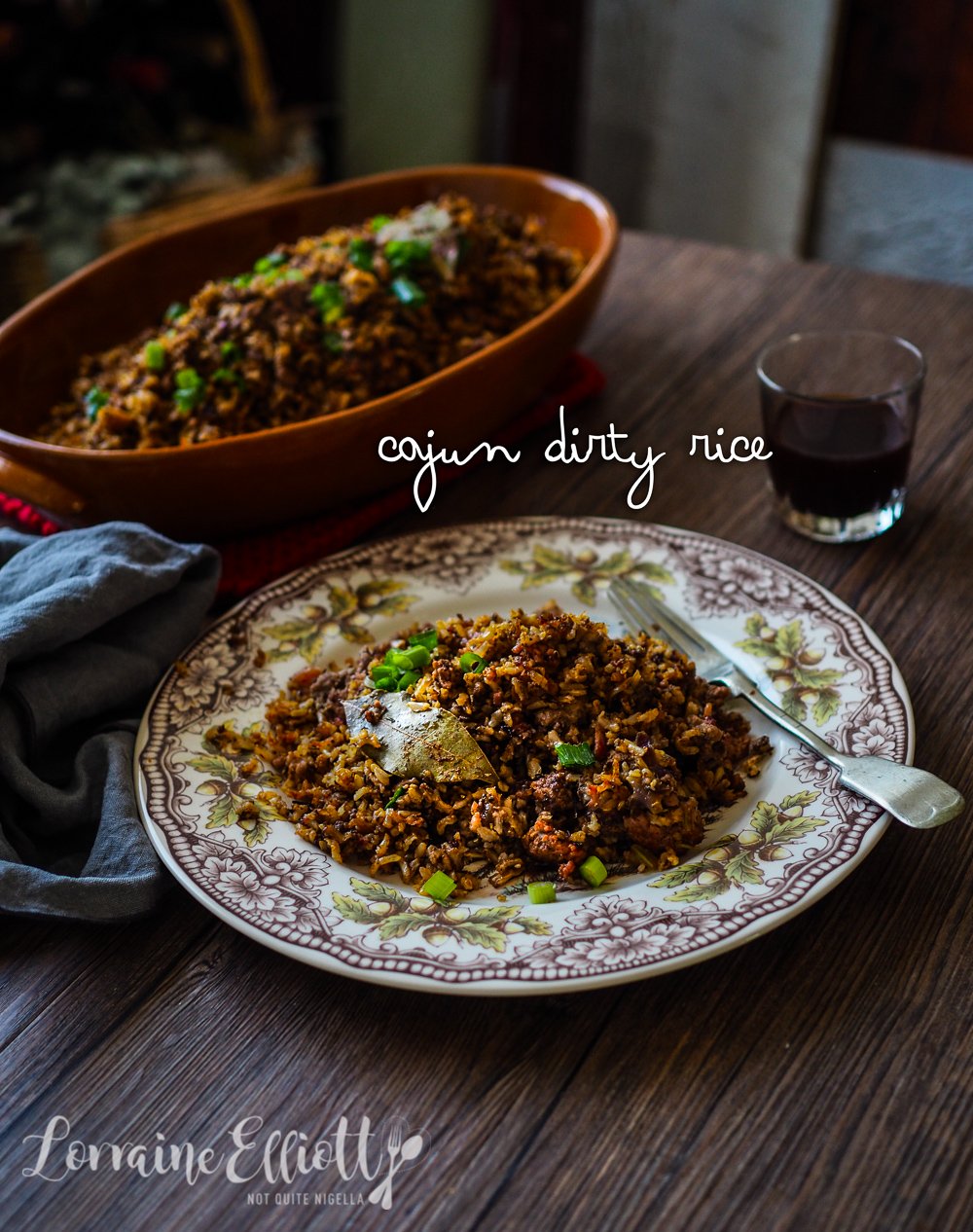 Cajun Creole Dirty Rice is a rice dish bursting with flavour. It hails from Louisiana where long grain rice is cooked with a mixture of mince, bacon and one of the key ingredients: pureed chicken livers. Even with the livers it isn't overly livery in flavour, rather they give the rice a deeper more intriguing taste.

Traditionally dirty rice was made using leftovers (in the same way that fried rice was invented). It is common in South Louisiana where rice grew well (wheat and corn didn't fare as well in Louisiana's wet climate) and rice is a staple in a lot of Louisiana cuisine from Jambalaya, Gumbo and Crawfish Étouffée, the latter two where it is served alongside.

Dirty rice was a poor person's dish using cheaper meat like mince and bits of a chicken that richer families would discard (liver, gizzards and giblets). It was economical, filling and a one pot dish. It was often served as a side dish to go with chicken or pork - I made it to go with fried chicken but it can also stand as a meal in itself. 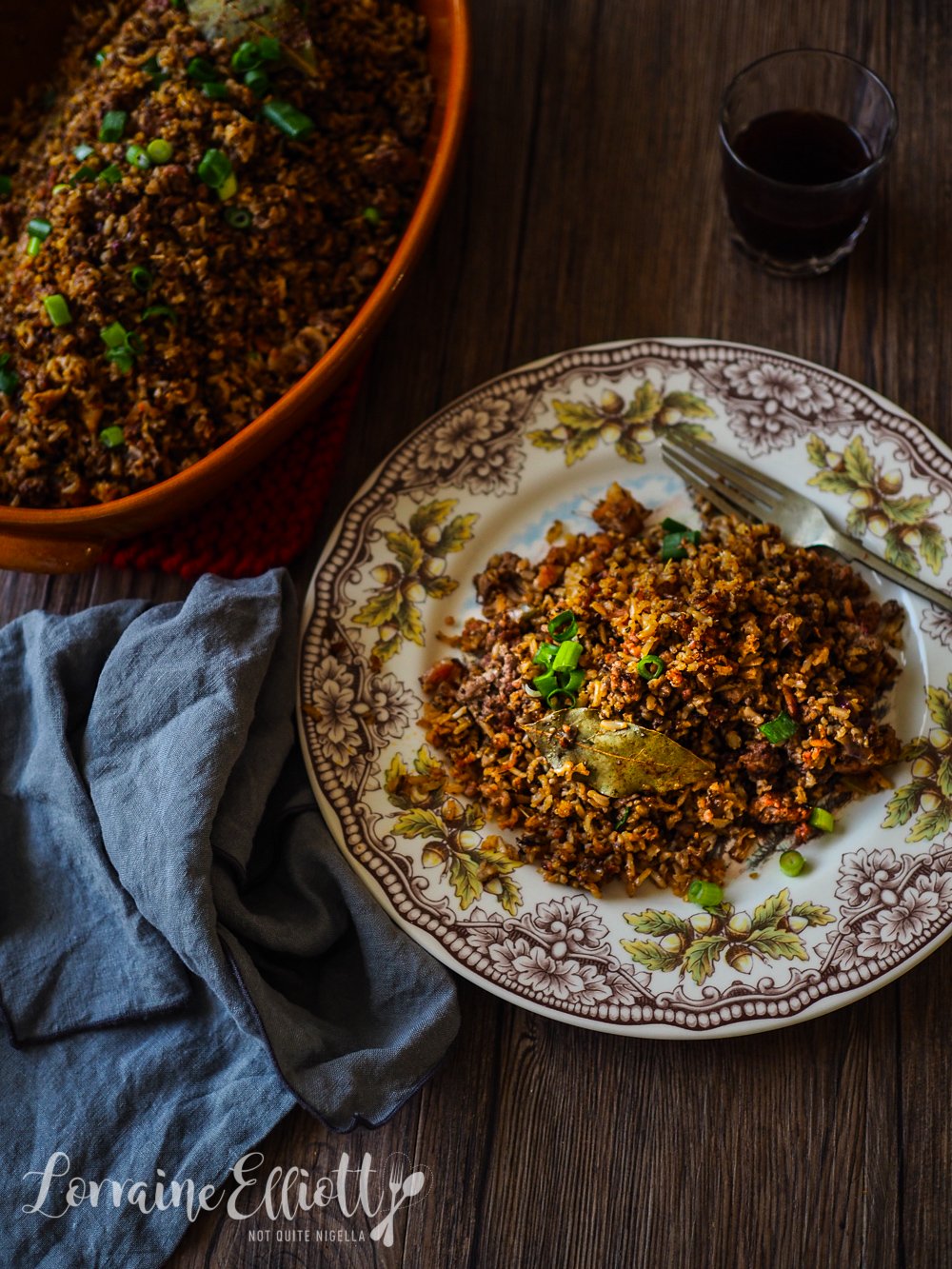 Cajun rice first starts with the holy trinity of Cajun cuisine: onion, celery and green capsicum. It can be made by cooking the rice in stock along with the livers and mince but it is also useful for using up day old rice.

It's up to you whichever way you want to do it and you do tend to get more separated drier grains if you use day old rice. Some recipes have only a little bit of liver in it but I wanted to make mine gutsy (no pun intended) and flavoursome. Feel free to reduce the amount of livers that you use although I will say that you really don't taste them much at all.

Talking of dirty, our little boy Mr Teddy Elliott has been a bit naughty lately. You see he loves getting his nose in places it isn't meant to be or invited. And while we are very fortunate he doesn't chew shoes or furniture, he does have a real thing for tissues which I've mentioned before.

There is no greater look of excitement or joy when we open up a box of new tissues. Because he is a ninja and does everything silently and quickly we have to keep the doors closed of rooms that we don't want him to go into.

We thought that the bathroom was safe until one night it was too quiet. I looked around and asked Mr NQN where Teddy was. He said he last saw him in the bathroom. "Oh god!" I said jumping up. Teddy wasn't in the bathroom but he was on the bed chewing on a used tissue and a used bathroom item! He was blissfully unaware of what he was doing. To him he was just chewing. I could not grab it out of his mouth quickly enough and replace it with his toy. A proper toy. Not bloody garbage!

So tell me Dear Reader, have you ever tried dirty rice? What do you make with leftover rice? Do you prefer separated rice grains or rice that sticks together? 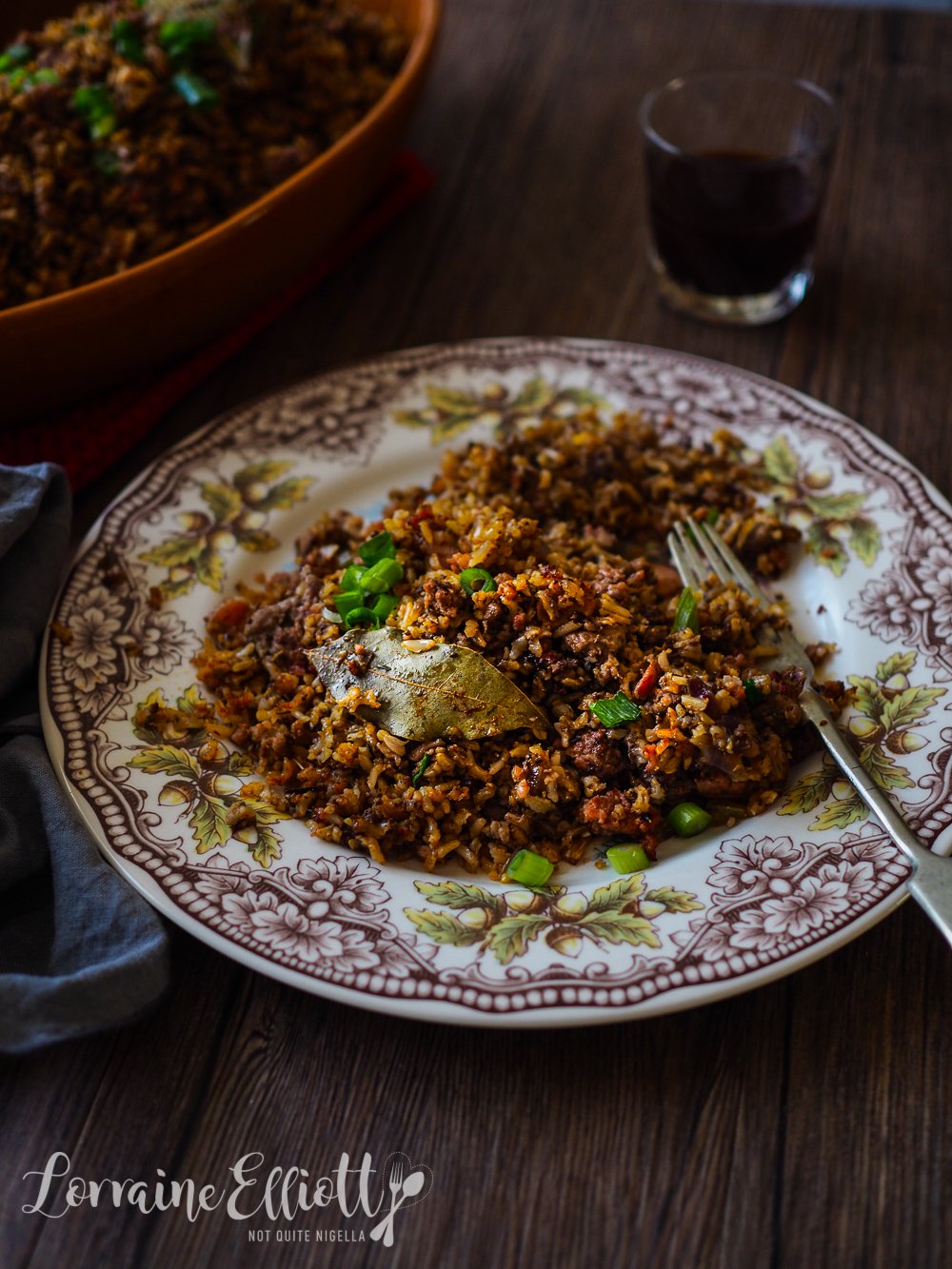 The rice is best made a day ahead

Step 1 - Cook the rice the day before by cooking it in the stock. Then cool and refrigerate. 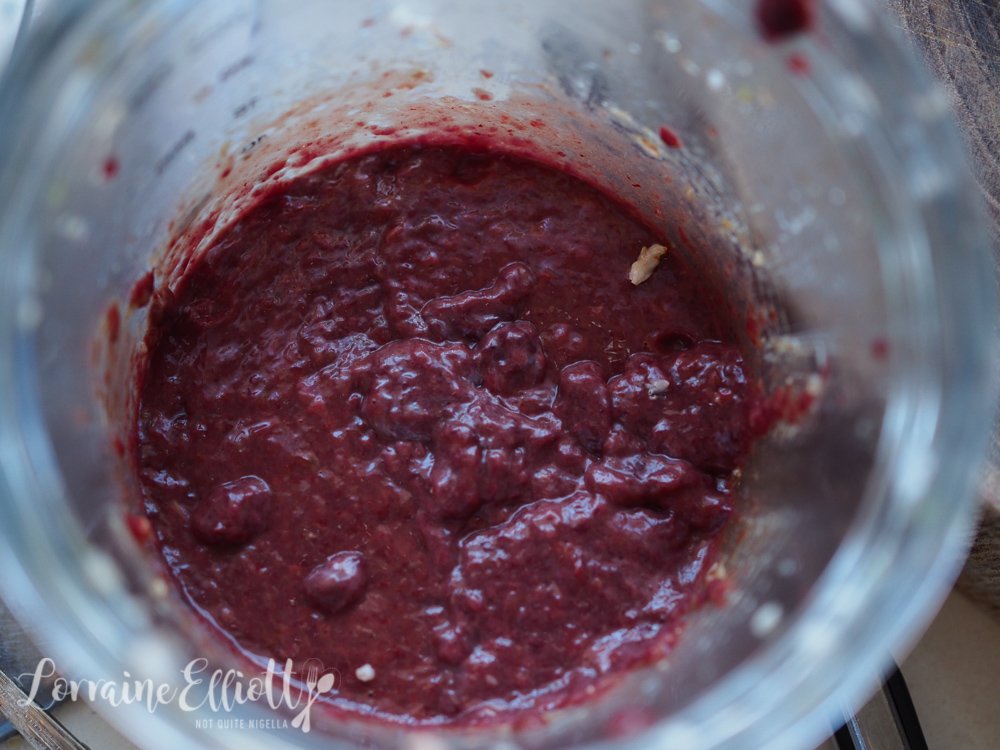 Step 2 - Add oil or fat to a large frypan and saute onions, garlic, celery and capsicum until soft-around 10 minutes on medium high heat. Add bay leaves and then fry the mince and bacon until cooked through. 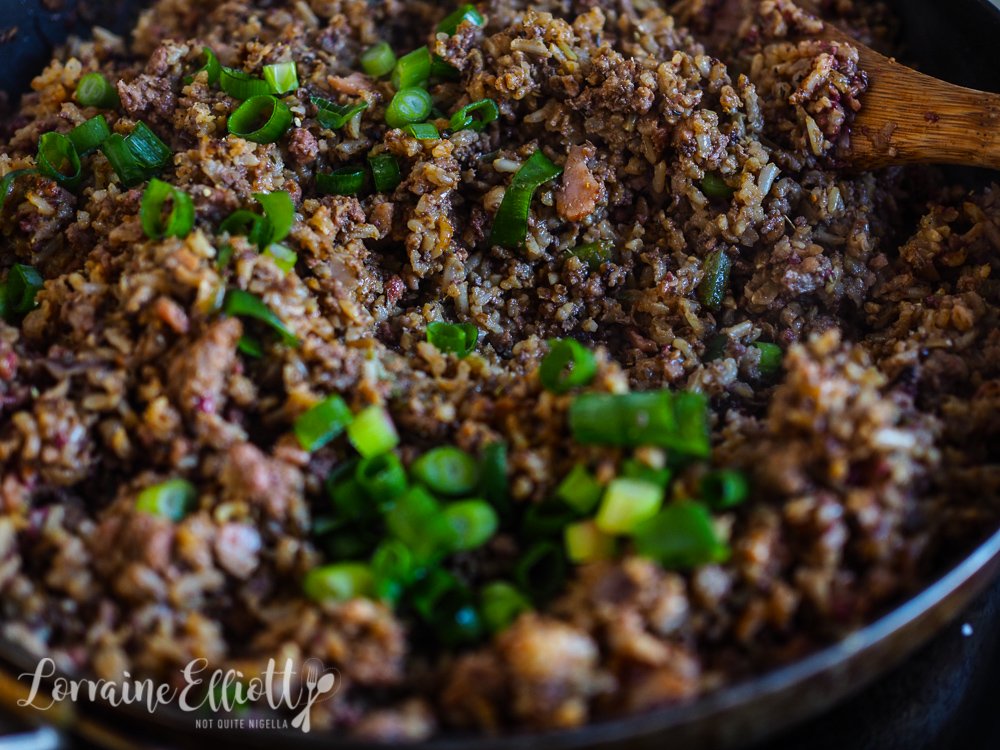 Step 3 - Add the rice and Cajun seasoning and then add the chicken livers turning the rice in the livers. If you are using uncooked rice, add the chicken stock here and then cook the rice through in the pan. Add shallots and serve. 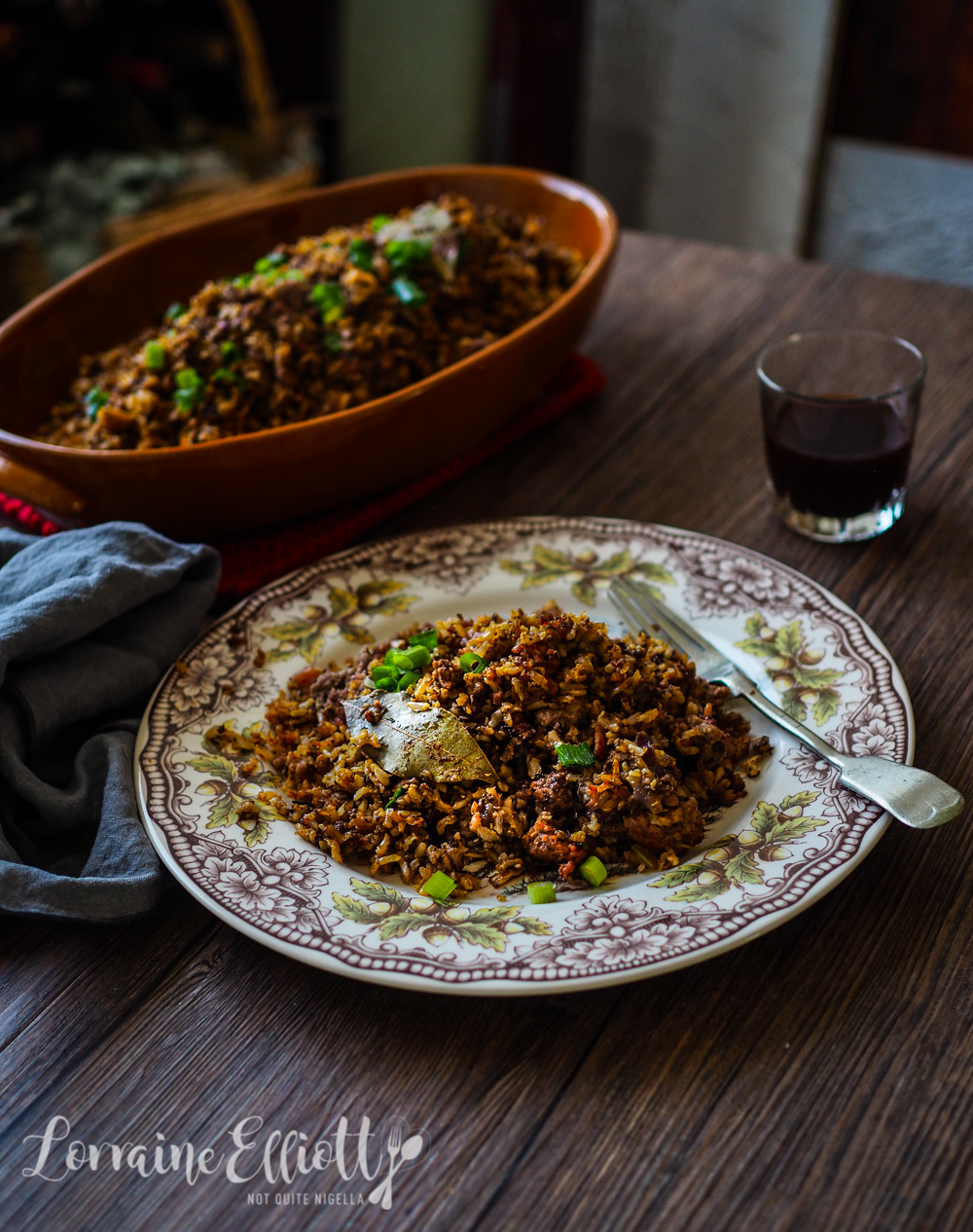