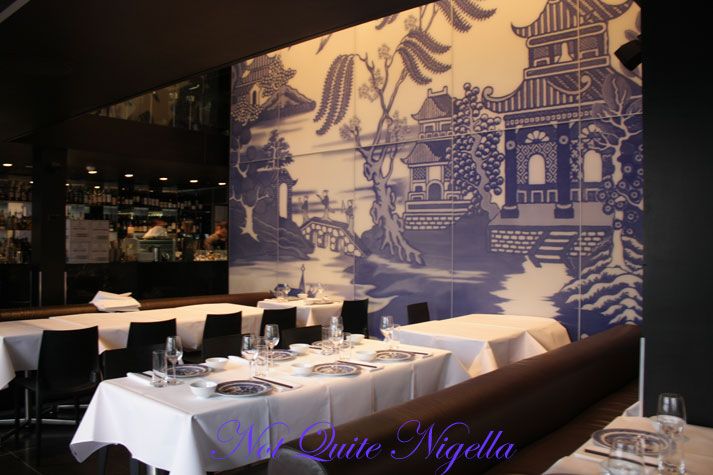 "You just don't know how to _hold _the reservation and that's really the most important part of the reservation, the holding. Anybody can just take them." A quote from Seinfled is usually how I like to begin my days and on this sunny Winter's Day on Woolloomooloo wharf, my dining companion Carbon Debit has called me while I am on my way to China Doll for our lunch with Soph. They seem to have lost our reservation. Thankfully, unlike Seinfeld, there is no issue getting us a table outside. We deduce that they probably misspelt it and possibly have it under the wrong name. Seinfeld moment over. 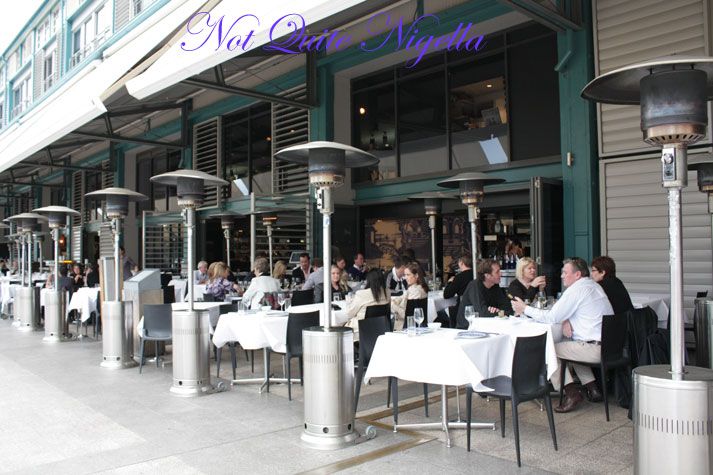 It's a long time coming this visit to China Doll. It was spurred on by the recent apperance of the chef Frank Shek on the Australian version of Masterchef.  I was not an instant convert to the show. I disliked the way they seemed to wring every bit of emotion or tears out of the contestants and play the sappy, emotional music to bring out what little emotion there was. Where was the cooking? Finally after the selection process, they started the real show and I've been glued ever since (did anyone catch the appearance of the Brad Pitt of the foodie world Adriano Zumbo the other week?). I've even gotten used to George Calombaris's comments like "make the food look as if it had fallen on the plate like autumn leaves" and now find them endearing. Then there's Matt Preston's incongruous pleasure face - you know the one where when he eats his facial expression looks as though he's repulsed by the food, only for him to say how wonderful it is. 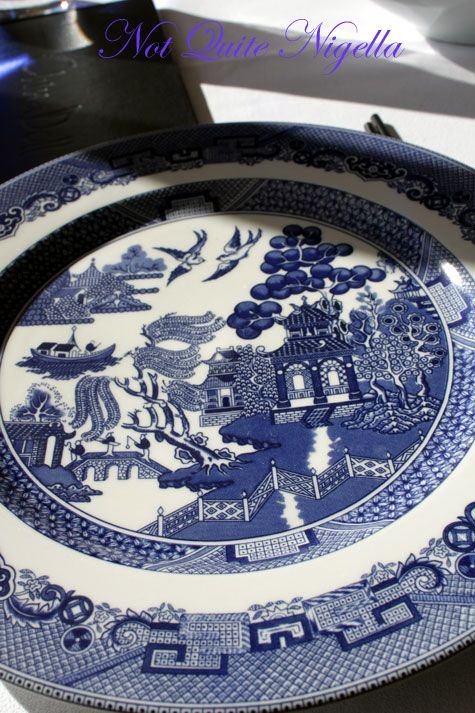 I disgress, we're back to China Doll on Woolloomooloo Wharf and for the Russell Crowe fans, yes Woolloomooloo Wharf is where his apartment lies (although we miss out on any Russ sightings). This is one of Sydney's nicer looking Chinese restaurants and when I sit down I see familiar blue and white plates that just happen to be the exact ones that we use at home every day. This blue and white plate pattern is echoed throughout the whole restaurant with a wall in the same pattern and the small version of the plates on the toilet doors. 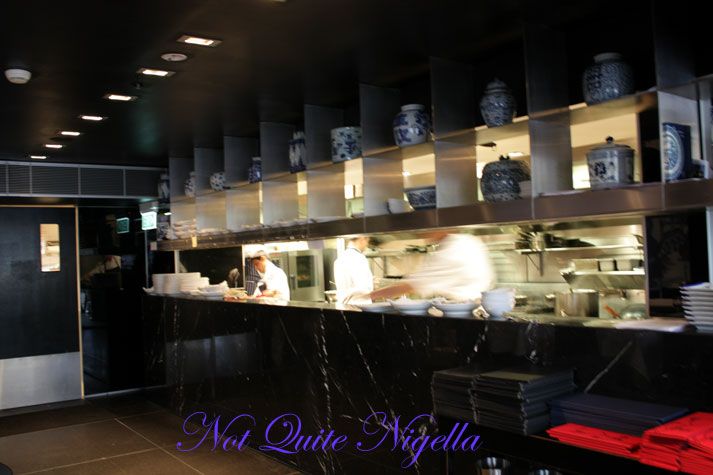 Our waiter is friendly and comes back a few times for our order as we're busy catching up. We ask him for the specialties and he gives us about half a dozen and we choose among them. The menu is a pan Asian one with Japanese and Malaysian influences but since it's supposed to be a Cantonese restaurant we try and go for the Cantonese dishes (with the exception of the sashimi). Service is good throughout the day from him although there is one waitress who seems determined to follow the Chinese waiter's version of service and without finesse, dumps the plates on the table wordlessly. 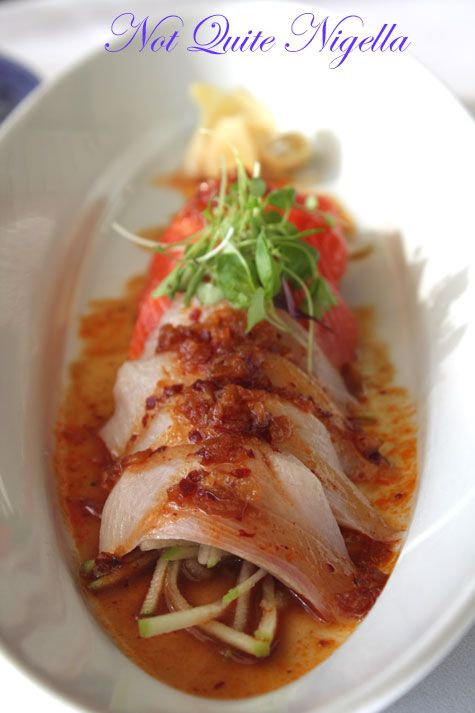 The dishes don't take long to arrive. The Hiramasa Kingfish & Yellowfin Tuna Sashimi with Blackened Chilli Dressing is simply but beautifully plated. The rich, spicy sauce is drizzled on top and it lies on a bed of thinner than matschstick thin batons of crisp green apple. I particularly like the Kingfish. 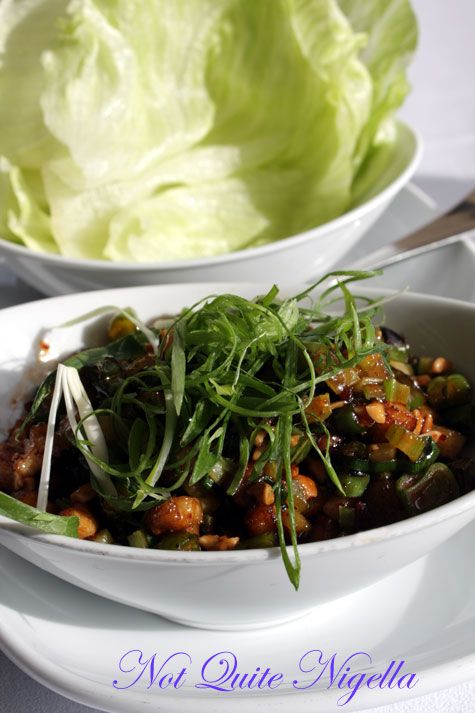 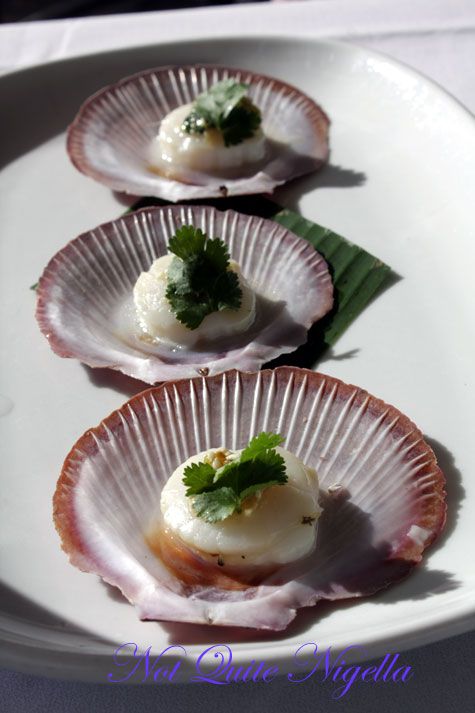 Steamed Half Shell Scallops with Ginger, Shallots & Sesame$4 each

The Steamed Half Shell Scallops with Ginger, Shallots & Sesame are delicious and subtly flavoured with the ginger, shallot and sesame (although Carbon Debit and I prefer very fat scallops). 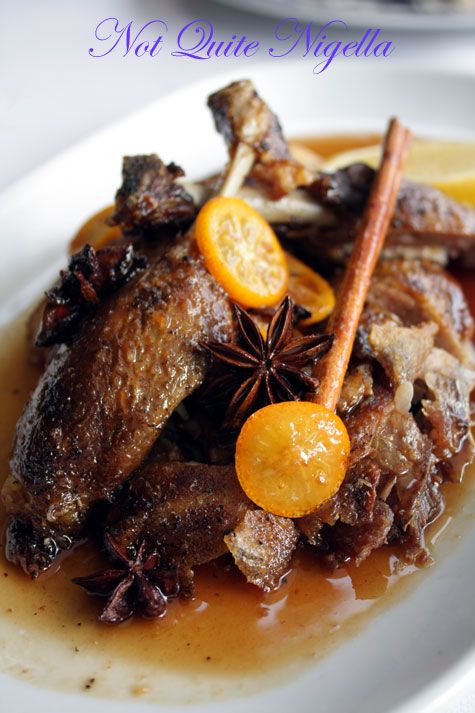 The Tea Smoked Free Range Thirlmere Duck with Plum & Tamarind Sauce could be a more plentiful doppelganger in looks with Kylie Kwong's duck dish but with sliced cumquats instead of mandarin or plum. The flavour, particularly in some pieces, is very strong with star anise, a flavour I like but in moderation and overall it's not too bad. 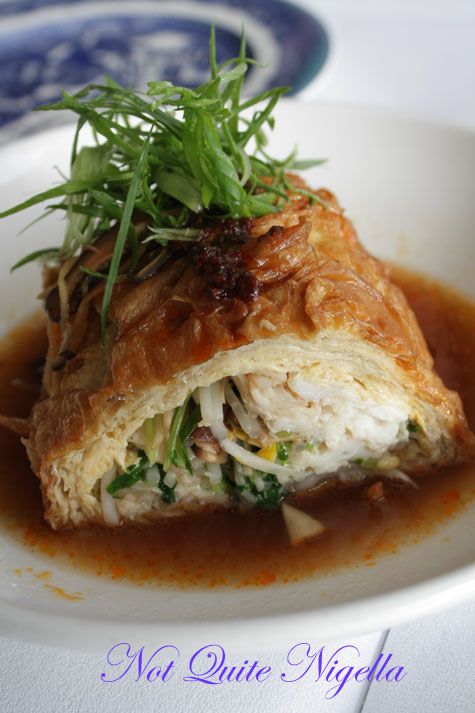 Our last main is a very impressive looking omelette stuffed with crab and mushroom. The portion of this is quite large and it's delicious, packed full of delicate blue swimmer crab, bean sprouts and mushrooms and a touch of XO in the sauce (although I would have preferred more XO). 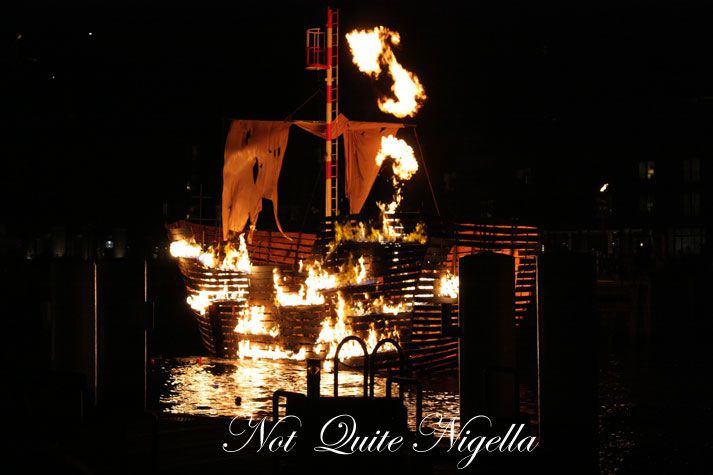 We have a quick look at the dessert menu-it's a moot point as we're also full and we know that the dessert menu is never the highlight on a Chinese menu. The sun disappears and on this afternoon so do we. I join Mr NQN and we go to see the Vivid light show held on the Harbour from the 26th of May until the 14th of June. There are some amazing shows and displays of light and the crowd favourite judging by the numbers was the Fire Water display where they re-enacted a scene in which a convict ship was burnt down -very convincingly I might add! 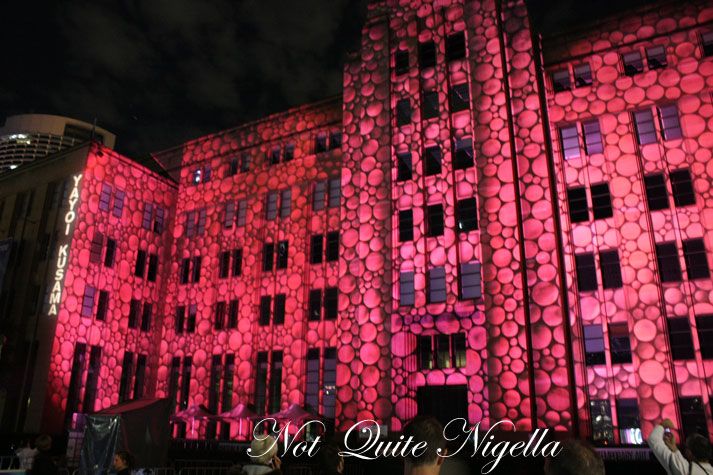 Another favourite display was the patterns of light projected on the MCA including a Yayoi Kusama print. 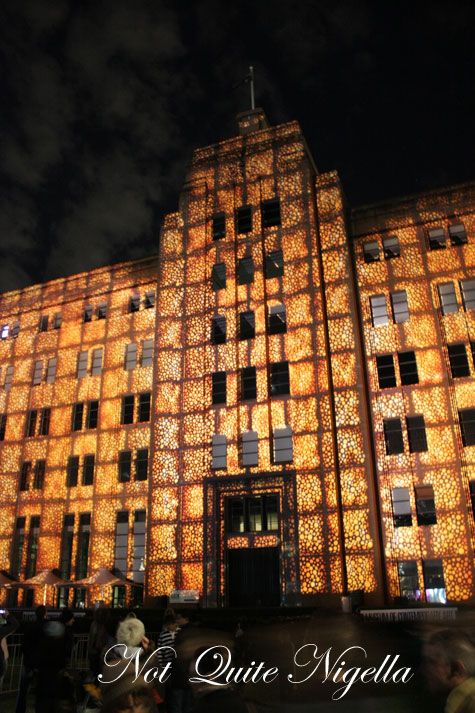 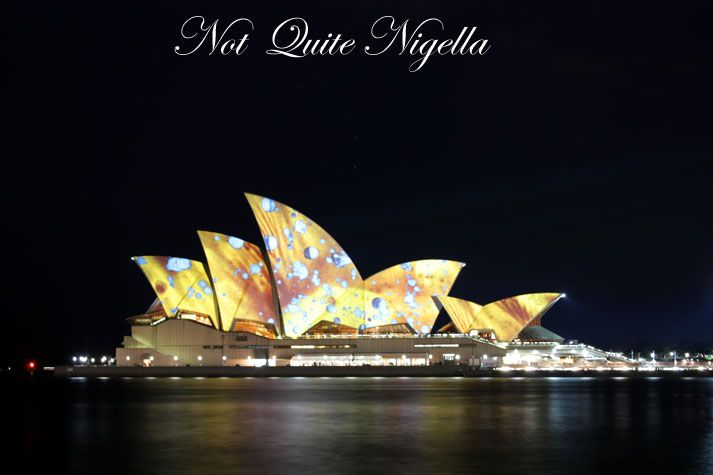 The Opera House also got the same treatment with changing patterns. 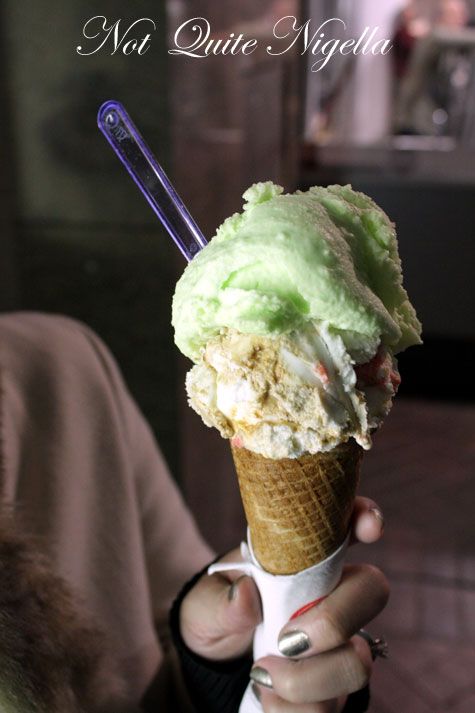 And we finished off the evening with a Kransky from Playfair cafe in the Rocks (eaten in haste so no photos were taken) and an ice cream from Gelatissimo (the green apple being the favourite).

So tell me Dear Reader, who is your favourite to win on Masterchef? Or who do you not want to win? And what do you think of the judges? 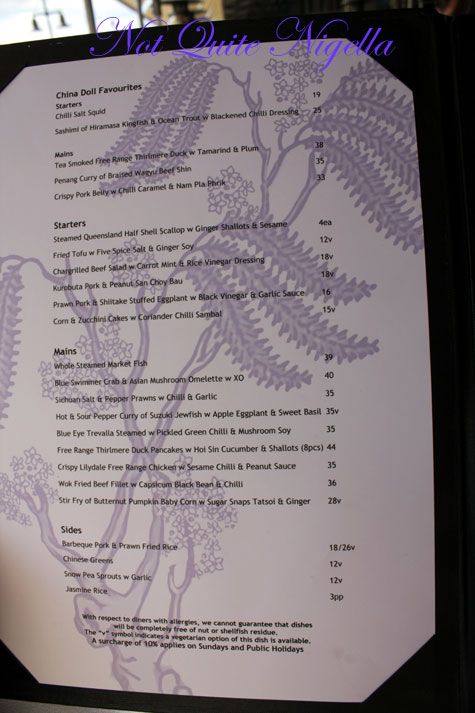 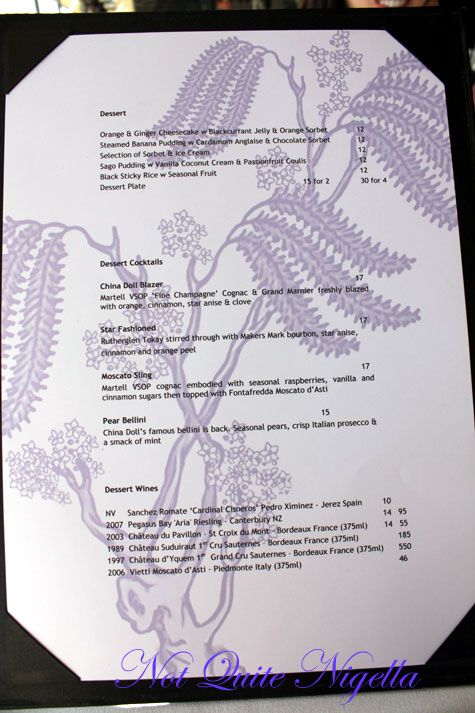