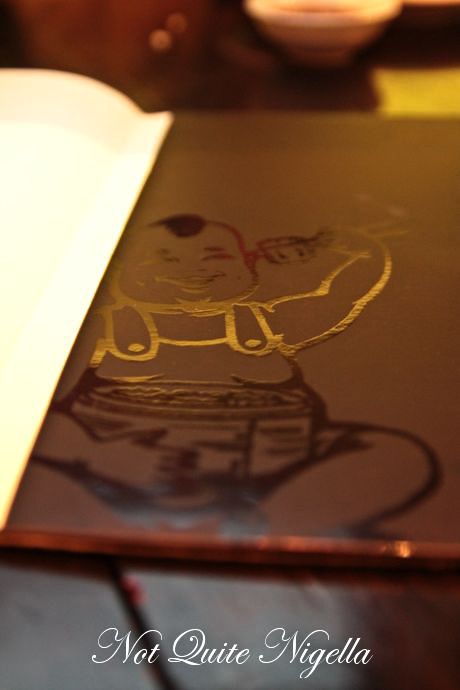 As Chinese parents who bring up children in English speaking countries are wont to do, my parents gave my sister and I Chinese names as well as English ones. My name translated from Chinese into English means "Little Pretty" (although my mother would often sniff that I had more in common with my English name Lorraine which means "warrior" according to the book she used). Not so fortunate was my sister when she asked my father what her Chinese name meant.

"It means 'Little Homely'" he said.

My father is not usually known for his diplomacy or tact. My mother horrified at his translation scrambled to find a less offensive descriptor and translated it to mean "Little Quiet" before giving up and admitting that my grandfather named me and my grandmother named my sister and that there wasn't really a word for her name. "I just thought it sounded nice in Chinese" she offered weakly. 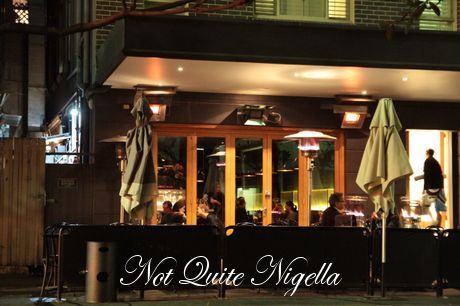 And so I knew that it was with both my parents that we had to visit Fei Jei meaning 'Fat Boy' in Chinese. Recommended to me by a friend of mine Woolloomooloo resident Petrina formerly at Donna Hay, she was melodically swooning over the omelette said to be lighter than air. Fei Jai is the "fat child" or more accurately small compact moodily lit child of Peter Lew whose uncle owns Flower Drum in Melbourne and Nicole Holloway formerly of Hugo's. And my Cantonese father who prefers to eat Chinese only food would no doubt have his own opinion of the food. It sits on Challis Avenue or as well call it the street of no restaurant names (aka too subtle signage) and we only find it because we know that it is at number 31. 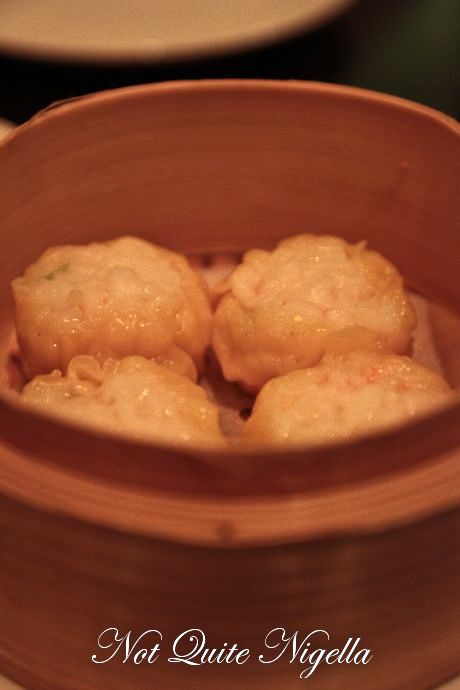 OK they're not the cheapest little morsels at $15 for four but they are a cut above the rest. The filling for the siu mai is chock full of plump and juicy Hervey Bay scallops and prawns. And before you know it, your siu mai is gone and you don't have another to replace it which makes one a bit sad. Between each and every course they clear and replace our plates which secretly pleases my mother who leans over and whispers "I'm very impressed by that" but Mr NQN and I feel that we don't need such frequent plate changing picturing the towers of plates in the smallish kitchen so we ask to keep our plates. 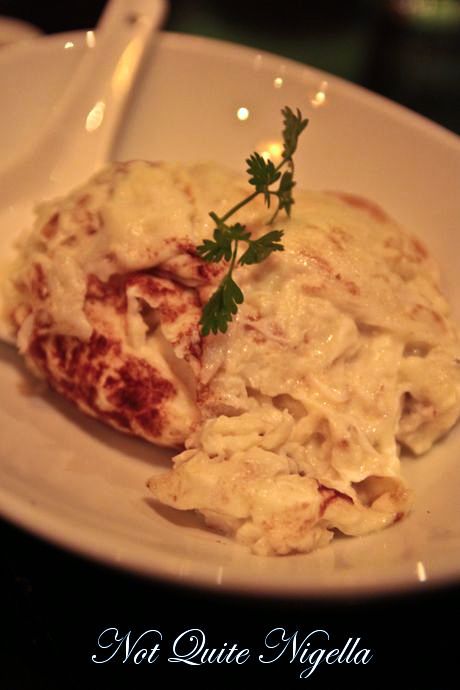 The star dish, the crab egg white omelette is fluffy and light and creamy with delicate pieces of blue swimmer crab, and not just tiny threads of crab, some big enough to notice that they're there and it's made from freshly picked crab. There's a small bowl of black pepper to sprinkle on top of the omelette which brings it all together beautifully. 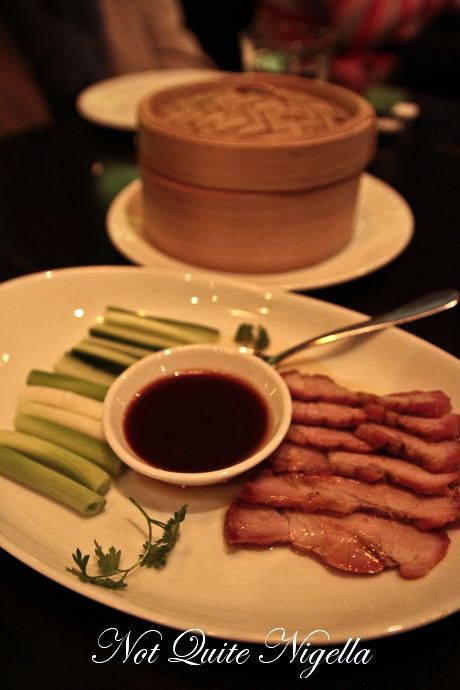 An alternative to the Peking Duck pancake the char siu slices are tasty and have a similarish flavour to the Peking Duck without the crunch of the skin. I think this would be a good idea to make pancakes at home when you don't have access to really good crispy Peking Duck. One thing that my friend Teena always makes a point to notice is even serving sizes for the amount of people and given that there are four of us and there are seven of the pancakes and char siu, we would have liked to have been asked if we wanted it upsized for an even number. Because sometimes it can get ugly when it comes to people missing out! 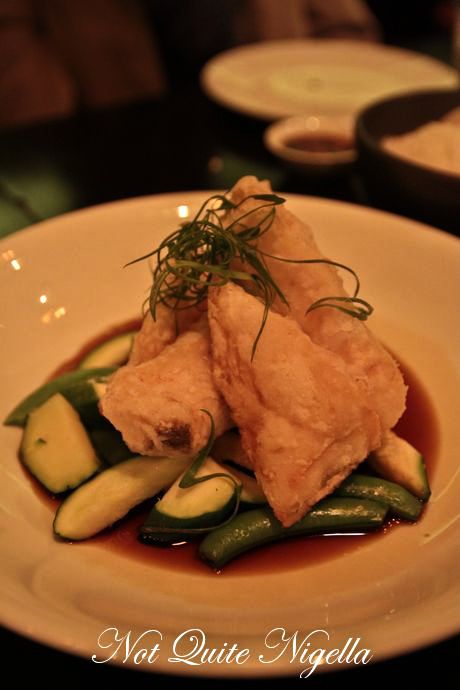 Each of the mains came with a bowl of rice at $3 a person and more was quickly offered if we ran dry. The wok fried Patagonian toothfish was coated in a light batter and deep fried in two large pieces and retained its moistness. It was served on a bed of sugar snap peas, snow peas and zucchini with a delicious soy and sesame sauce that was soaked up by the rice. 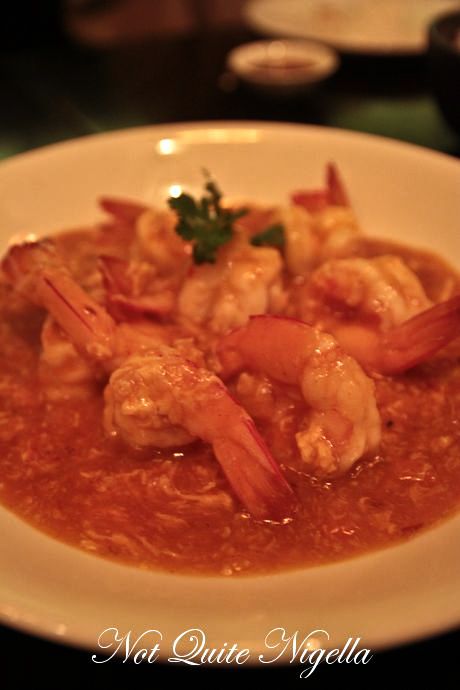 I always compare Singapore chilli prawns to my mother's and when they set this down our eyes widen. It actually looks just like hers and we happily dig in. And we are in hog heaven because it does taste very much like my mum's recipe except hers has perhaps a bit more sweetness and ginger. There are delicate wisps of egg white, the pungent spicy slightly sweet and sour sauce and perfectly textured Mooloolaba king prawns. Again there are seven pieces of prawn, an eighth would have been nice to round it out (and eight is a lucky number in Chinese culture). And our waitress, who is absolutely brilliant and possesses a combination of charm and intuitiveness spots our plate with sauce and brings us another bowl of rice which Mr NQN dunks into the sauce and eats in about 30 second flat with a sauce eating grin on his face.

Intrigued by their version of the Singapore chilli prawns my mother asks Lew who is clearing a nearby table where the name came from and he tells us that it was his nickname as a child and still retains this nickname to this day (although he is neither fat nor a boy). He tells us that he used to go into Flower Drum to eat and I suppose when your relatives own a restaurant like that, well you do tend to eat heartily! 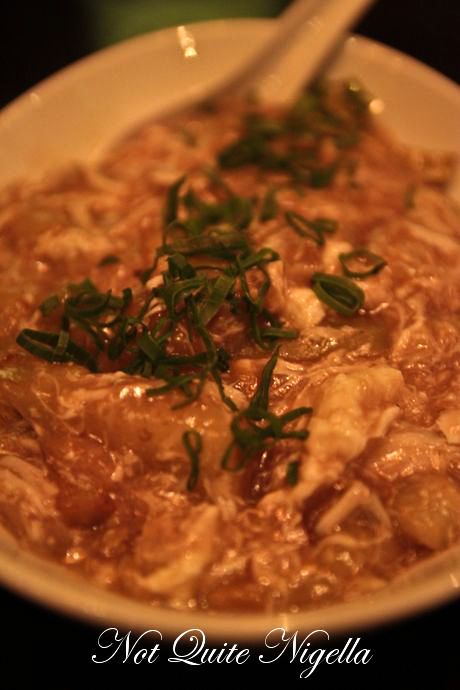 This was a special that night and if you do go, ring ahead to ask if this is on the menu because this was heaven in a bowl. The soft eggplant is so creamy and just melts on the tongue and the silky strands of blue swimmer crab and egg white combine to make this silky, flavoursome and it just glides across your tongue. OK I'll stop now because I sound like those crazy Iron Chef Japan judges now :P But I was smitten by this as were the other tables around us that ordered this and bestowed upon it similar cooing and compliments. 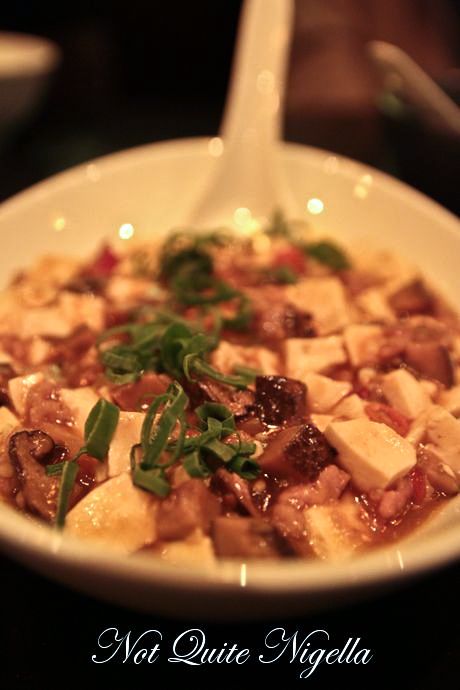 The ma pu tofu is  delectably spicy enough to let have you huffing and puffing a little but still plunging your chopsticks into the bowl provided for more. There are diced shiitake mushrooms but not a lot of pork just the occasional piece and at first I thought it was a vegetarian version. The tofu is lovely and slippery soft and full of flavour and spice. We notice that all of the plates come out one at a time but when a table sat down next to us they were asked if they wanted their mains to come out all at once. If we had this option we would have taken it. 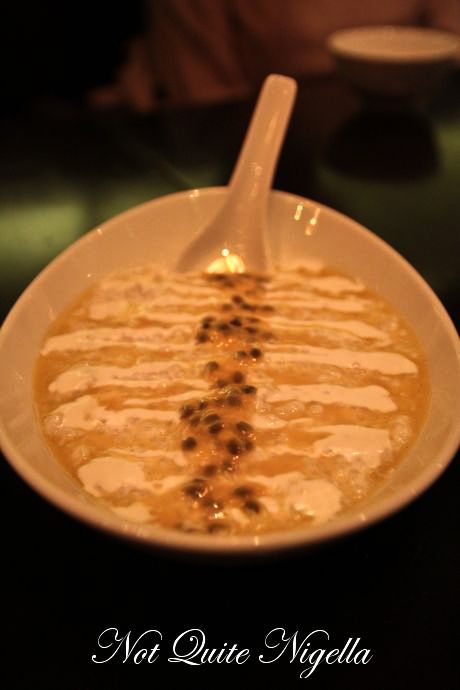 Dessert time! There are two desserts on offer a banana fritter which I chose as I know my mother loves fritters (she who loves deep fried) and when we give the sago a miss Mr NQN pipes up with a "We're not getting the sago?" and a sad face so we order that too. The sago arrives and we have a chuckle as it is probably the largest dish of the night. The sago is served cold with coconut cream and passionfruit to give it a tanginess. I like my sago a bit sweeter personally with lots of palm sugar caramel but Mr NQN hoovered this up quickly. 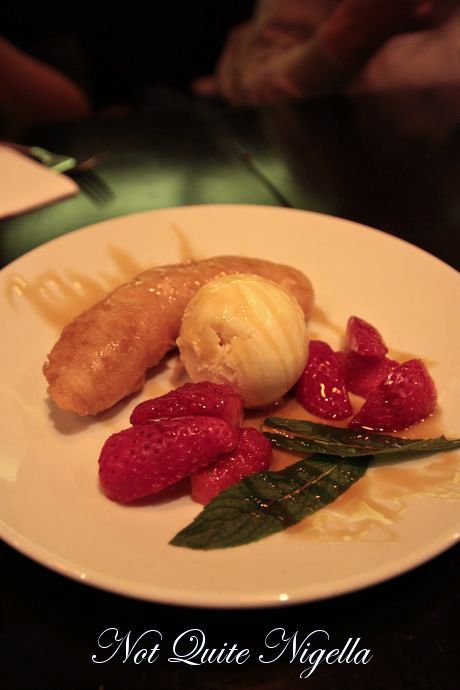 The banana fritter came as one large banana coated in a crunchy batter topping and lines of caramel toffee sauce. It was said to be served with a vanilla bean ice cream although beans were not really apparent and it was not particularly vanillaey. The banana, somewhat a premium nowadays with current prices seems more like a naughty treat for adults and I favoured the crunchy ends with the ice cream.

So tell me Dear Reader, what was or is your nickname and do you like it? Mine was boringly, "Lorry" in primary school and then "Lozza" in high school (oh how I cringe at that!). 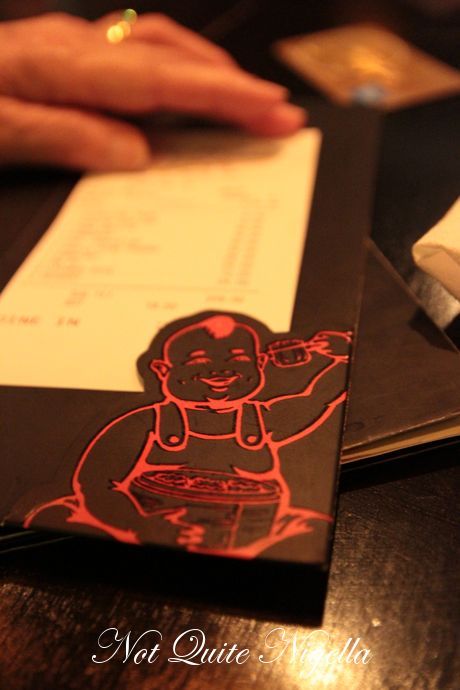 Bookings for early or late dining only 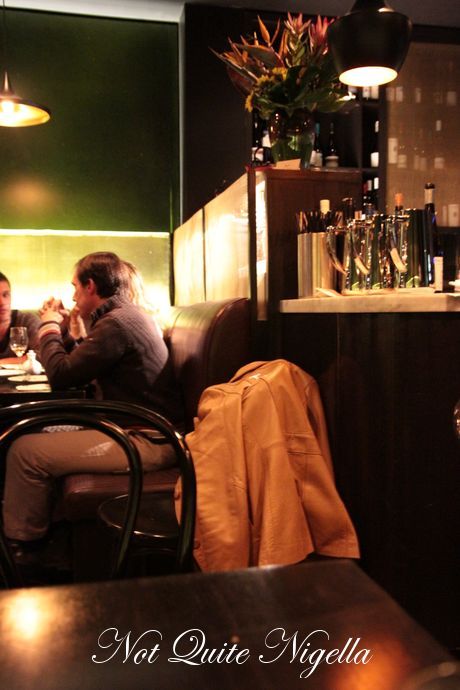