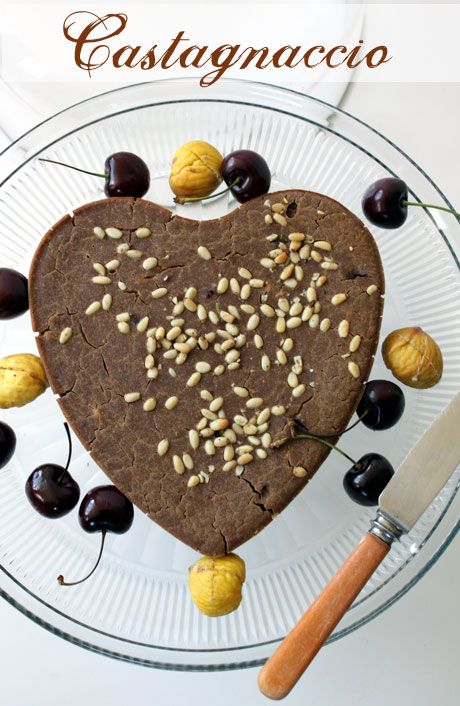 I hope Vegan readers will not take offence but Vegan cakes and stylish Italian fare don't appear  synonymous. Veganism, at least to my thinking, is often associated with some sort of sacrifice (although Vegans would probably deny this) but for my palate it means the sacrificing of a lot of my favourite foods. I do have Vegan relatives and friends and it can be hard when trying to think of a cake that will satisfy their requirements but is also palatable and isn't so hard that it can be used a weapon (although I have to say I've seen a few great looking Vegan chocolate cakes on blogs). This cake surprisingly answers that call and it's also good if you happen to have a roundtable of people with food allergies and intolerances as chestnut flour does not contain any gluten. 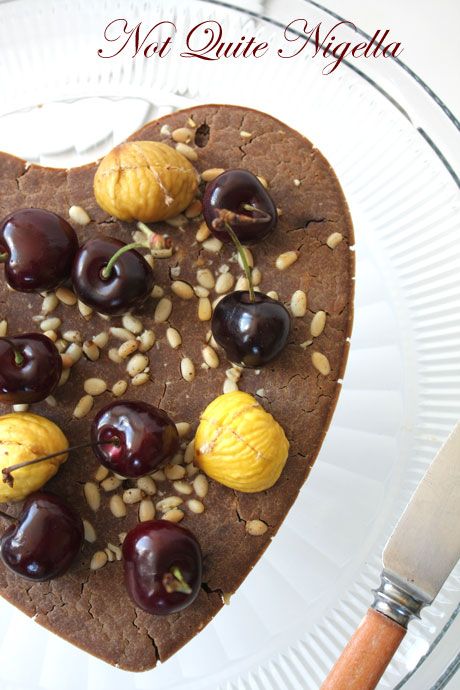 I stumbled across this idea when trying to figure out what to do with my remaining chestnut flour. I had just over 400grams of it and this was just calling out to me given that it required 400grams of flour. I read and re-read various recipes. There were no eggs, not much butter or oil and barely any sugar. Was this correct? I thought I'd have some faith in it and just try it anyway. It was also alarmingly easy to make. Just a  bit of sifting and mixing and half an hour in the oven. 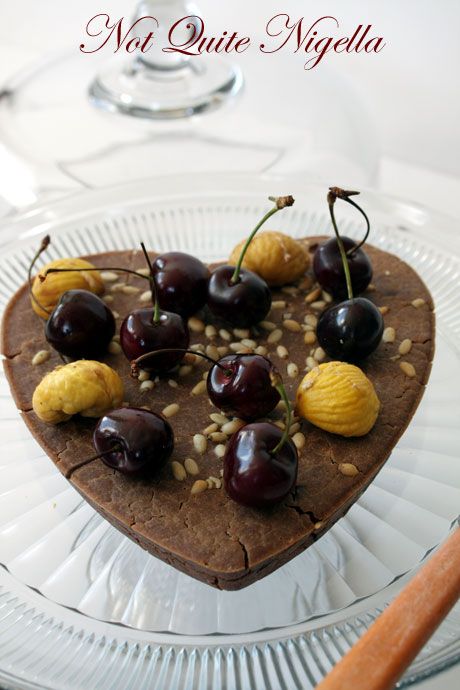 I did warn readers that as we are moving and we're trying to eat as much as we can out of the cupboards to avoid moving it all, that there might be some strange recipes coming up. This is an example of running out of sultanas and replacing them with cherries which I thought tasted delicious. And not a prawn head in sight. 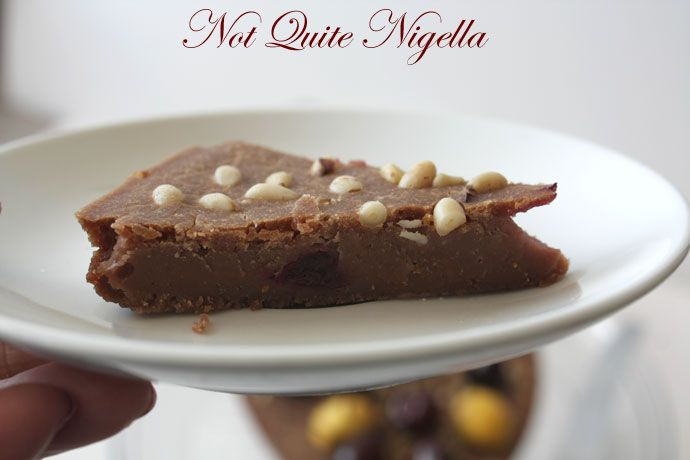 The cake itself is a lovely texture although it's not light and fluffy. It's flat in appearance and thicker in texture, sticks to the tongue and palate and tastes almost like a lightly sweetened chestnut puree. As it's supposed to be thin (about 1cm) and not rise I found that the recipe below made enough for two heart shaped cakes so feel free to halve the recipe below if you have a smaller tin. I toasted some fresh chestnuts and added them on top. Responses to this cake were mixed. Some people just didn't get it while chestnut lovers did. I wouldn't say that this is the most popular cake I've made and it may not appeal to everyone but I liked the nuttiness and creaminess of the chestnuts.  It looks rather alarming at first - people have described it as looking like a cracked sidewalk but have faith. I did and was duly rewarded. 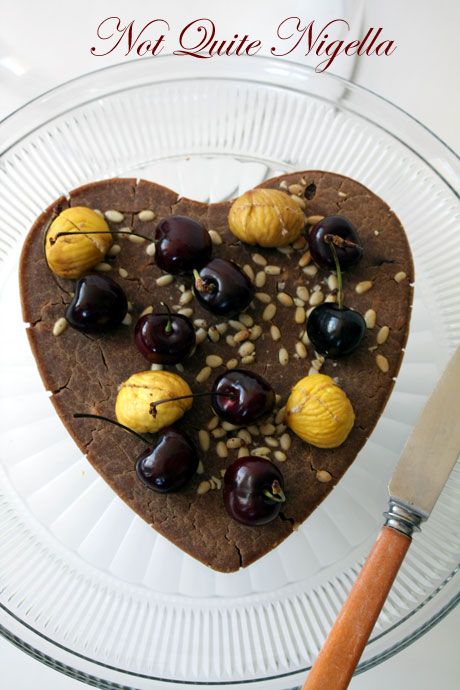 So tell me Dear Reader, have you ever toyed with or have become a vegetarian or vegan?

**Buyer's tip: In Australia, Chestnut Flour can be found at Simon Johnson. As nut flours can spoil easily, store in an airtight container in the fridge or freezer. 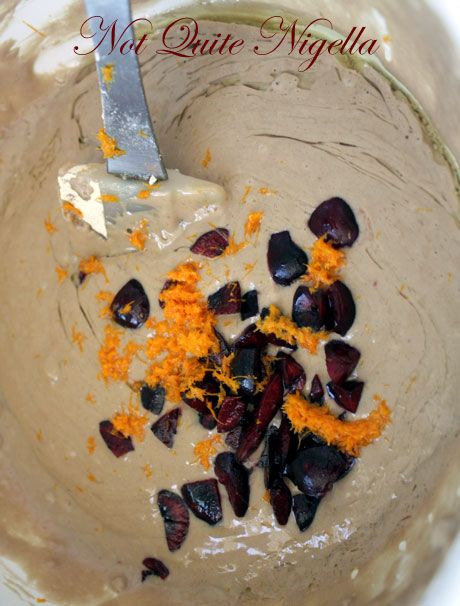 Step 1 - Preheat the oven to 160C. Butter 2 smaller baking tins or 1 large tin. In a large bowl sift the chestnut flour. Then add the water gradually and stir to remove any lumps. Stir in sugar and olive oil and then zest and raisins or sultanas or cherries and half of the pine nuts. 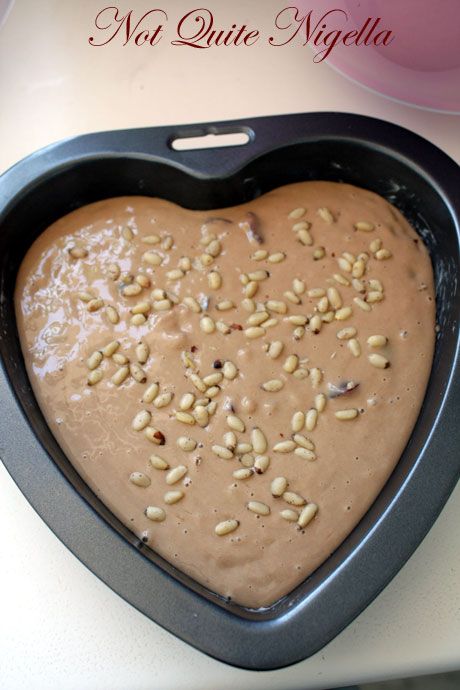 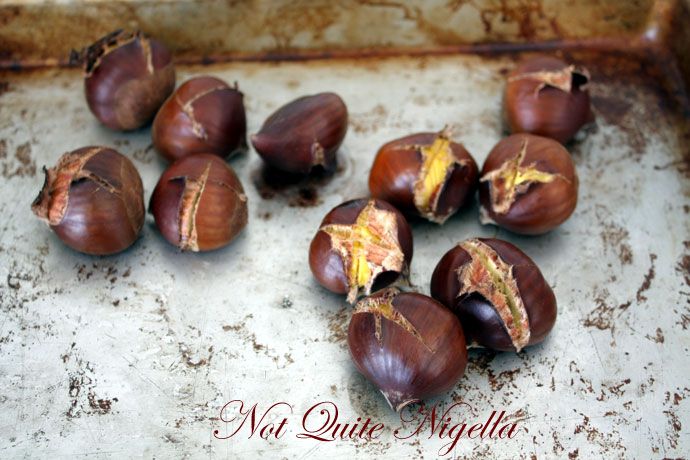 Step 2 - Pour liquidey batter into tins and sprinkle with the rest of the pine nuts and rosemary if using. Bake for 25 minutes. Cool for 15 minutes in tin and then remove. When cool decorate with cherries and chestnuts. 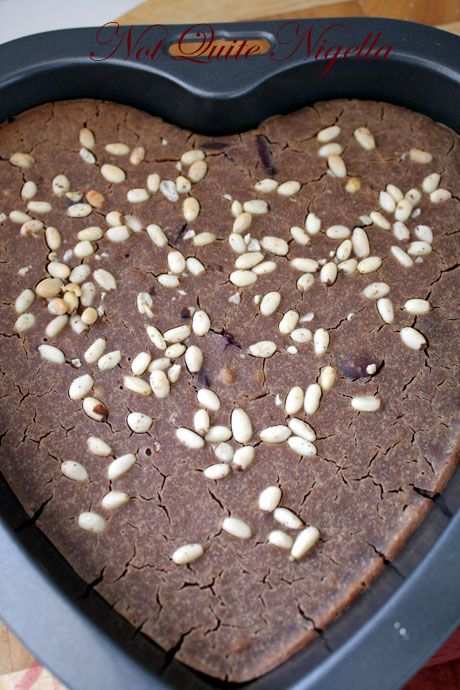