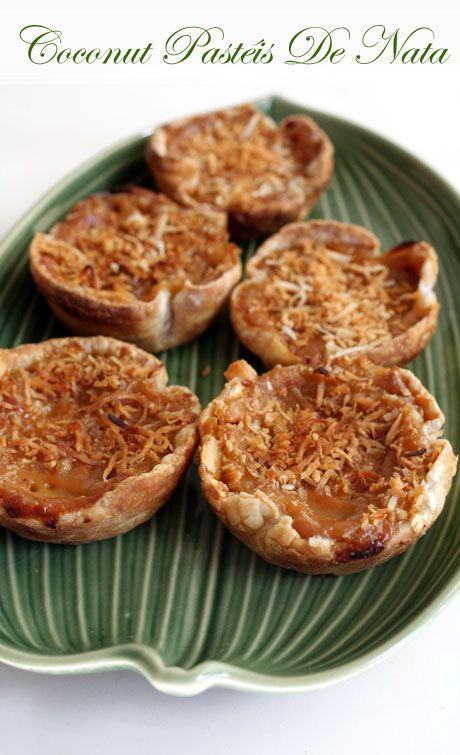 It was Father's Day again a few weekends ago and my father is always the easiest person to buy or bake for. To buy: it was a gift voucher at an arts and crafts store (he paints) and to eat no complicated cake, but rather a dozen of my finest home-made Portuguese Custard tarts please. These are the only things he will give up his strict low cholesterol regimen for. 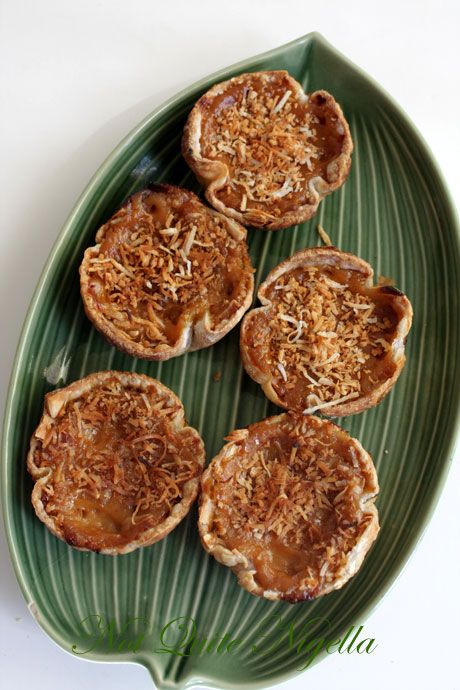 Despite the distinctly tropical look to it, the plate is one I brought all the way back from Japan when I lived there. I adore the beautiful lines of Japanese pottery and shipped back as much as I could with me even giving up precious shoe space for some of it which shows you how much I loved the stuff. Sure it has a tiny chip in it from when it made the big journey across the ocean and seas but I adore it and have not been able to find a replacement for it anywhere. 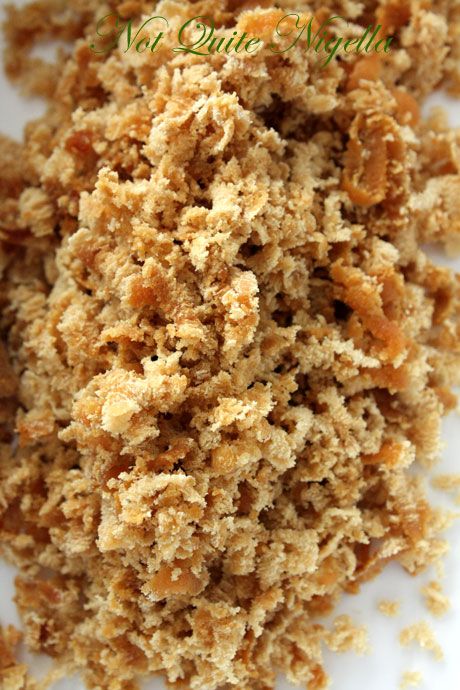 I was sent some Carnation Soy cooking milk which is the soy version of evaporated milk but it does not separate as soy usually does when heated so I decided to give it a try on these. Everyone could tell that there was something quite different about these and perhaps I would save the Carnation Soy if I were making these tarts for someone who was dairy intolerant or on a low fat diet. If you're not used to the regular Portuguese custard tart flavour then you may not notice such an obvious difference. However if you do want to a coconut version, just use the recipe as below using milk and cream. 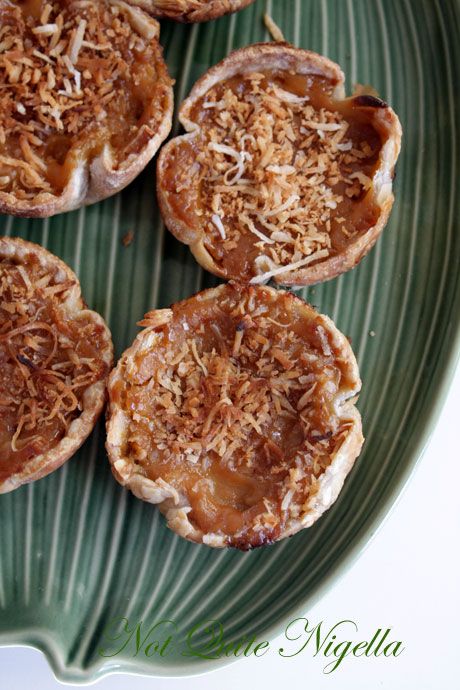 And as for the judging of which I spoke in the title? Excitingly, I was asked to be part of the Carnation Soy Masterchef judging challenge where all of the magazines in a magazine house (News, Pacific and ACP) were asked to create a recipe using the Carnation Soy and two judges from Nestle and I were to judge the success of these dishes. Going to the magazine houses was always going to be an interesting occasion, especially to ACP who had threatened legal action on me very early on in my blog's life. Nevertheless, curious about my first time food judging, I happily went along. 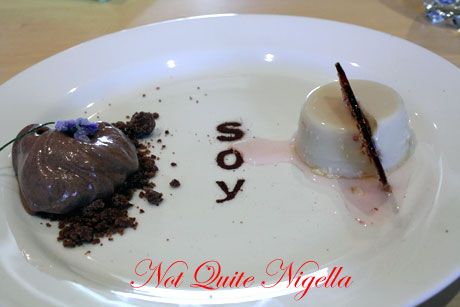 The first publishing house we visited was News Magazines and the magazines participating were Good Taste, Super Food Ideas and Delicious. Delicious editor Valli Little was there by herself in an effort to try and get the coveted prize - dinner for two at Quay for her husband's birthday (surprisingly, she had never been there before!). Yes you can see why the magazines were motivated to enter. Valli's soy milk and White Chocolate Pannacotta with chocolate soy ice cream and chocolate soil was tasted first. The pannacotta was very firm but the chocolate soy ice cream and chocolate soil were very good. 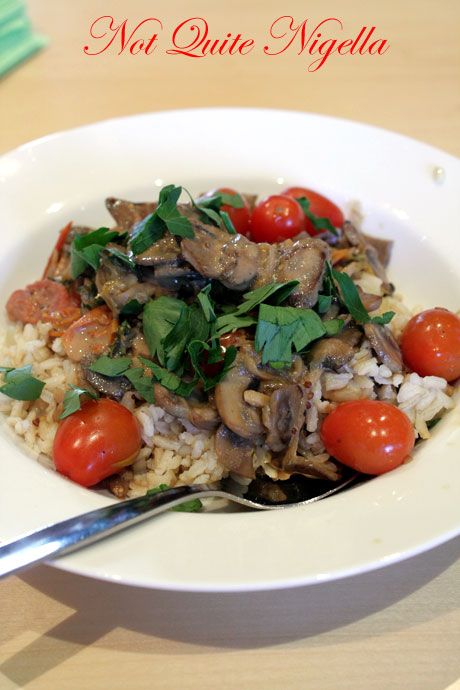 The Good Taste Stroganoff smelt delicious and tasted great-the only thing was that Nestle felt that they didn't use enough of the product in this which wasn't so much a concern to me than the taste which I really enjoyed. The Super Food Ideas' Creme Brulee was freshly torched in front of us and had chunks of halved or quartered strawberries in it. All three dishes were rather good and this was where there was much furious debate among judges but Valli pipped it at the post to win due to presentation. 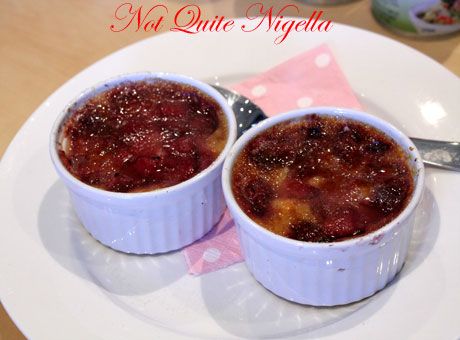 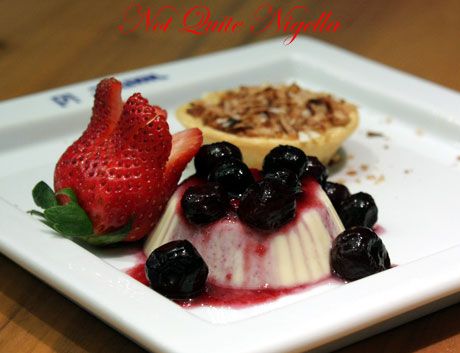 At Pacific, the magazines competing were Practical Parenting, Prevention and Women's Health. They were all great but many used dairy to help the taste along so they tasted much better. As I mentioned Valli's Pannacotta was very firm and she mentioned having issues with her pannacotta setting and having to use 4 gold gelatine leaves to set it which made it quite firm whereas Practical Parenting did a straight substitution for the soy milk and used powdered gelatine and there weren't any problems with it setting to that wonderful pannacotta consistency. The Coconut Cream pie was also fantastic and the toasted coconut really helped mask the soy taste. In fact I liked it so much I wanted to get their recipe but the girl that made it went on holidays. 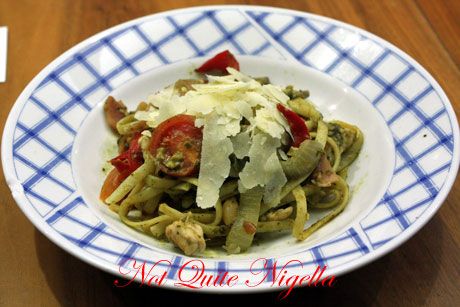 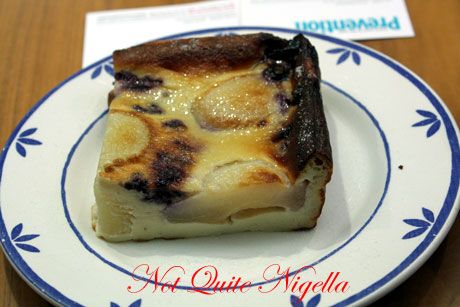 Prevention Magazine were actually having their launch party that night so we applauded them making something given how busy they were. They made a clafoutis and a pasta. I enjoyed the pasta but the clafoutis has some rather large pieces of fruit in it which were a bit hard to eat and it wasn't quite sweet enough. 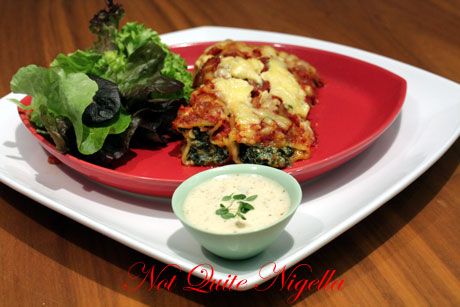 Women's Health made a Cannelloni with a soy cream which was delicious-just like a lovely homemade cannelloni but there was much debate as there was actual cream used in both parts. The Practical Parenting people won due to the coconut tart and the fabulously wobbly pannacotta.

And the last house to be judged was ACP. At the briefing they had the biggest turnout with 24 people. Was I "meeting with the enemy?". Would the legal threat be mentioned? I wasn't sure what sort of situation I'd face as there are many from ACP that subscribe to NQN so it was all very unknown to me. The ones that turned up seemed friendly enough and we had Take 5, Australian House & Garden and BBC Australia Good Food show up with some dishes. Women's Weekly also turned up but without a dish, rather a page from their magazine for a Pannacotta and the instructions to substitute the milk and cream for soy. 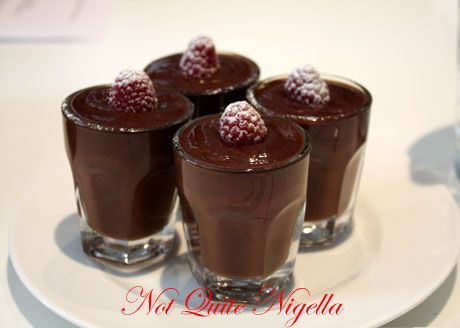 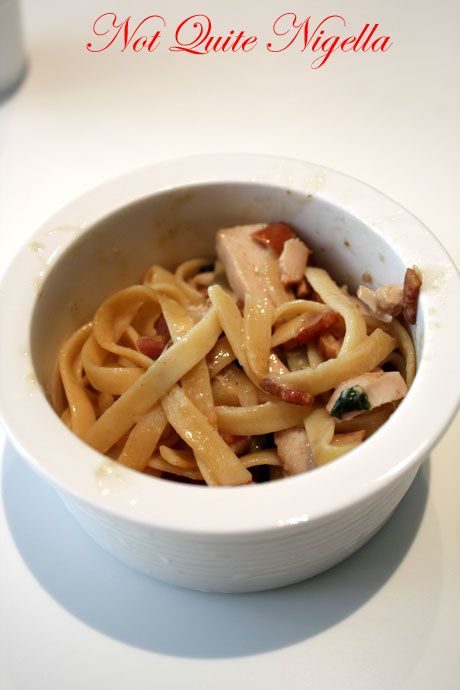 The Take 5 creamy smoked chicken and bacon fettuccine was fantastic and they had made sure that it was dairy free, economical, low cost and delicious. Australian House & Garden made a dark chocolate pudding which was very smooth and reminiscent of Yogo. They also made sure to use other Nestle products like their cocoa and chocolate and was the favourite of the Nestle judge. However we both liked the chocolate and coconut cake from BBC Australia Good Food which was soft and with a fine crumb and best of all we couldn't tell that it had soy used in it at all as it hadn't affected the taste. 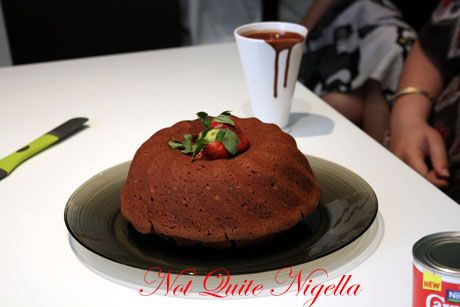 Overall there were some really delicious entries and whilst the Nestle judges looked at it from a product point of view (i.e. how many units of Carnation Soy were used and whether they used other Nestle Products), I looked at it from the consumer point of view i.e. taste and specifically whether it had that telltale soy taste. Given the diverse results with the sweets, I think the best use of the product is savoury as a substitute for cream in pasta sauces especially with a pesto or the stroganoff. For sweets, it would do better alongside really strong flavoured ingredients like chocolate or coconut (or both) unless of course you don't mind the soy taste which some don't.

And the best part of participating with the judging? I too get to go to dinner at Quay! :)

So tell me Dear Reader, have you ever participated in a judging either as a judge or as a contestant and what was it for?

Oh and a darling friend of mine The Second Wife has just started a new travel blog called She Goes and there's a little story on me! The picture is one MR NQN took of me on our honeymoon at Mana Island in Fiji. 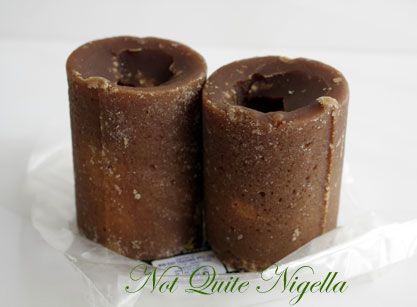 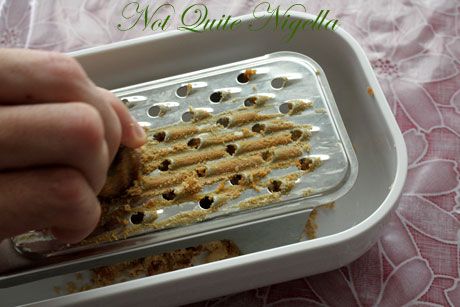 Step 2 - Put the eggs, sugar and cornflour in a pan and whisk together. If you are using Palm Sugar, grate it before you add it in. Gradually whisk in milk until smooth. 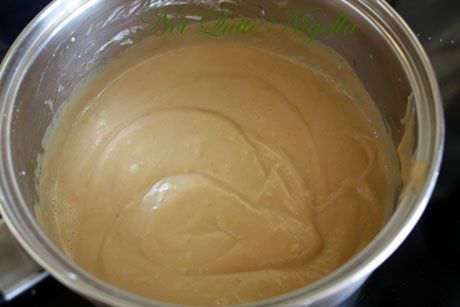 Step 3 - Place the pan over a medium heat and cook, stirring, until the mixture thickens and comes to the boil. Remove from the heat and stir in the coconut essence. Transfer the custard to a bowl, cover the surface with cling film to prevent a skin forming and leave to cool.

Step 5 - Cut the pastry dough sheet in half, put one half on top of the other and set aside for 5 minutes. Roll up the pastry tightly from the short end and cut the pastry log into 12 x 1cm rounds. Lay each pastry round on a lightly floured surface and use a rolling pin to roll out until each is 10cm in diameter.

Step 6 - Press the pastry rounds into the muffin tin. Spoon the cooled custard into the pastry cases and sprinkle soem shredded coconut on top and bake for 20-25 minutes, or until the pastry and custard are golden. Leave the tarts in the tin for 5 minutes, then transfer to a wire rack to cool completely.

Adapted from recipe by Bill Granger 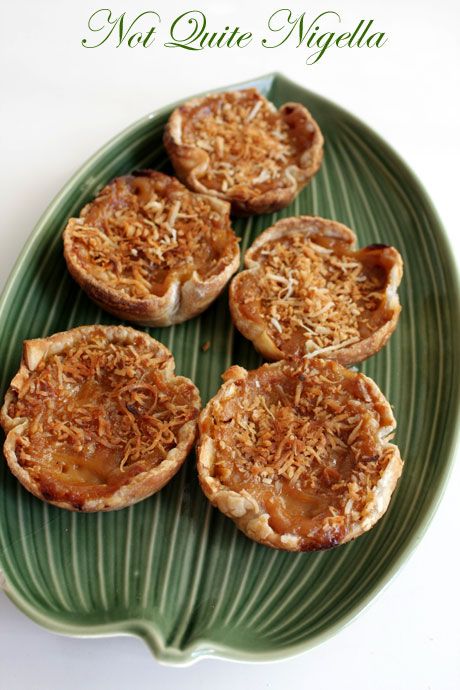