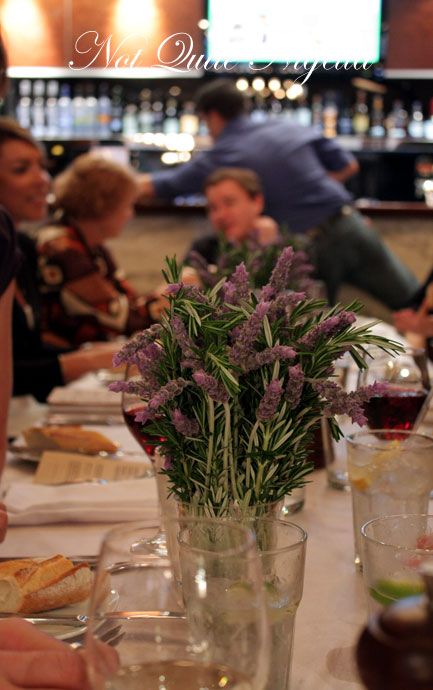 A glass of fragrant lavender and rosemary marks the spot at our table at Martin Place Bar, the recent winner of the Bistro of the Year at the I love Food Awards. Even on this Wednesday afternoon it's crowded with people eating and taking advantage of the "Lunch Within the Hour"  where diners can book and pre-order what they want and within 5 minutes of sitting down they can eat their meals and for the rest of the time can enjoy themselves rather than feel rushed and anxious if their meal will arrive. Today we've got a bit more time to enjoy things though and are partaking of a 3 course sampler lunch. 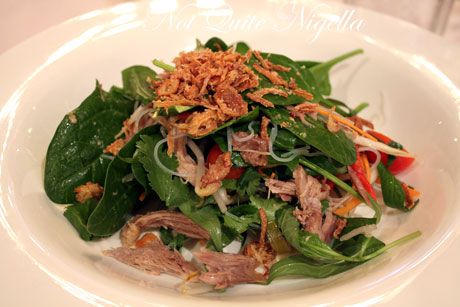 My Asian Style Duck Salad arrives in a  flurry of greenery with slivers of red chilli. The duck is shredded amongst the foliage which consists of tatsoi, coriander and shallots as well as crisp bean sprouts and there's a crunchy texture sprinkled on top of the salad from the fried shallots. It's light and refreshing although I'd like perhaps a touch more dressing to it. 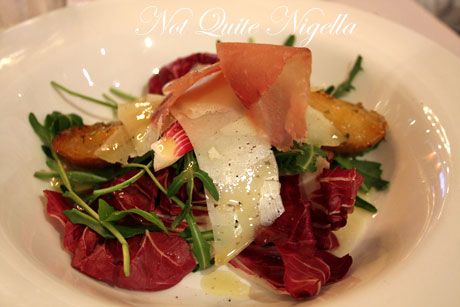 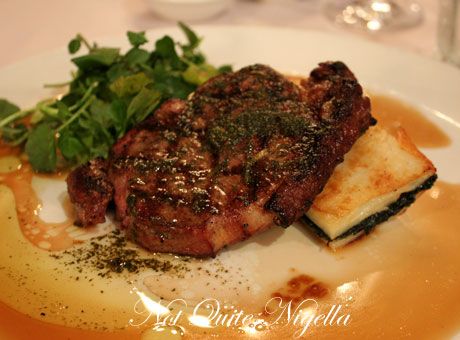 The dish that intrigued me was the Char grilled Grass Fed "Cape Grim" Sirloin. I've seen Cape Grim beef pop up on many restaurant menus. Cape Grim is an area on the North Coast area of Tasmania where the beef is left to roam free range and grass fed  rather than grain fed producing a distinct taste and a lower percentage of fat. I ordered it medium rare and it's perfectly cooked. The 250g steak is a great size. 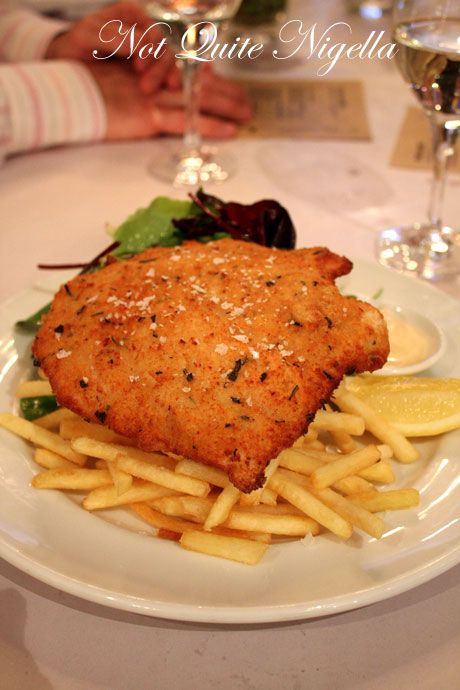 I see Jordan's chicken schnitzel which he adores and they tell me that often 2 people will order the schnitzel but ask for two plates it's so large. I ask if they mind people doing that and on the contrary, they endorse it. 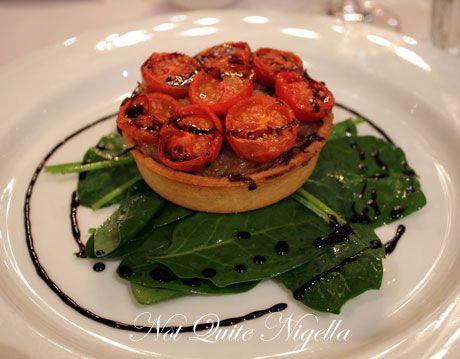 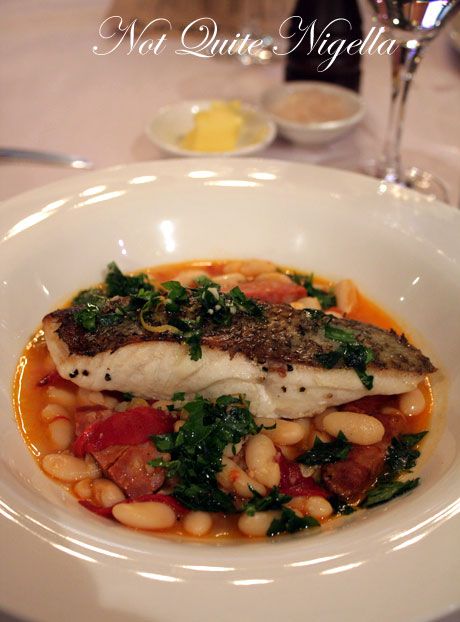 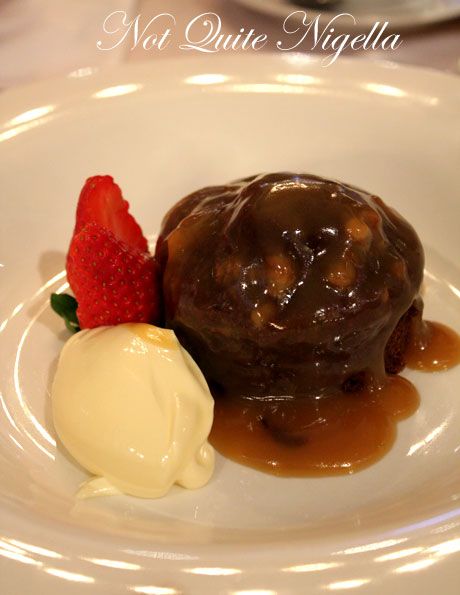 Although I've been a rather big glutton eating the whole steak, I can't resist sinking my spoon into the sticky toffee pudding-just for a taste you see and for research purposes and then the damn spoon takes on  a life of its own and keep going back for more with my mouth in cahoots. It's a soft cake with dates topped with a sprinkling of walnuts on top and a blanket of thick butterscotch caramel sauce. Oh so good yes especially with the quenelle of double cream (which is essential for sticky toffee pudding isn't it, I mean we're not kidding ourselves, the diet is on hold with this pudding). 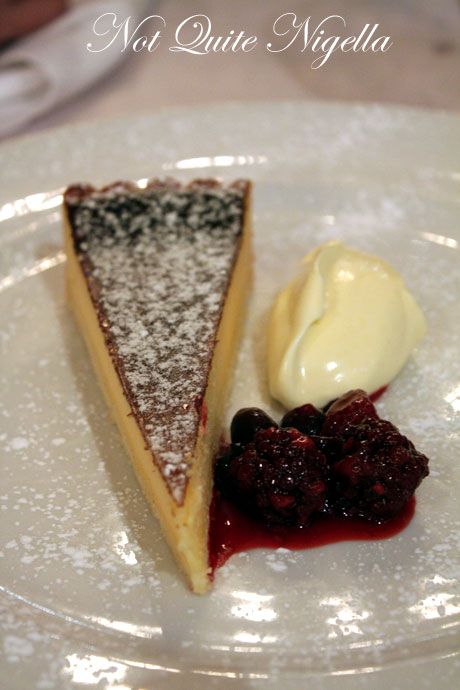 I try some of Jordan's lemon and lime tart and it's great although I only have eyes for the sticky toffee pudding. 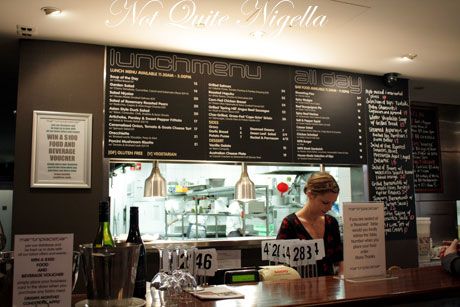 Head Chef John Docherty comes out from the kitchen to chat about the menu. He's formerly from the Dolphin hotel and he has  been cooking in pubs since 1990 when there were only 3 pubs in Sydney that served decent fare. Here they're conscious of the cost and the casualness. It's all seasonal produce and good value with mains starting from $14 up to $29 for the sirloin. Wines are from the owner Peter Wynne's personal collection of 500 bottles and at much lower prices than other restaurants. 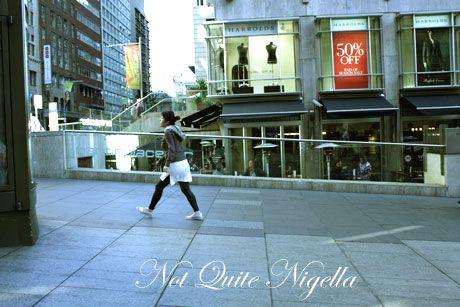 So tell me Dear Reader, how big is your wine collection? Mine is pretty small at about 20 - certainly not 500 bottles worth!

NQN dined as a guest of Martin Place Bar 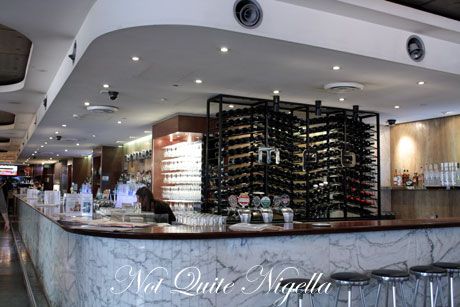