A Night At The Sebel Pier One, Sydney 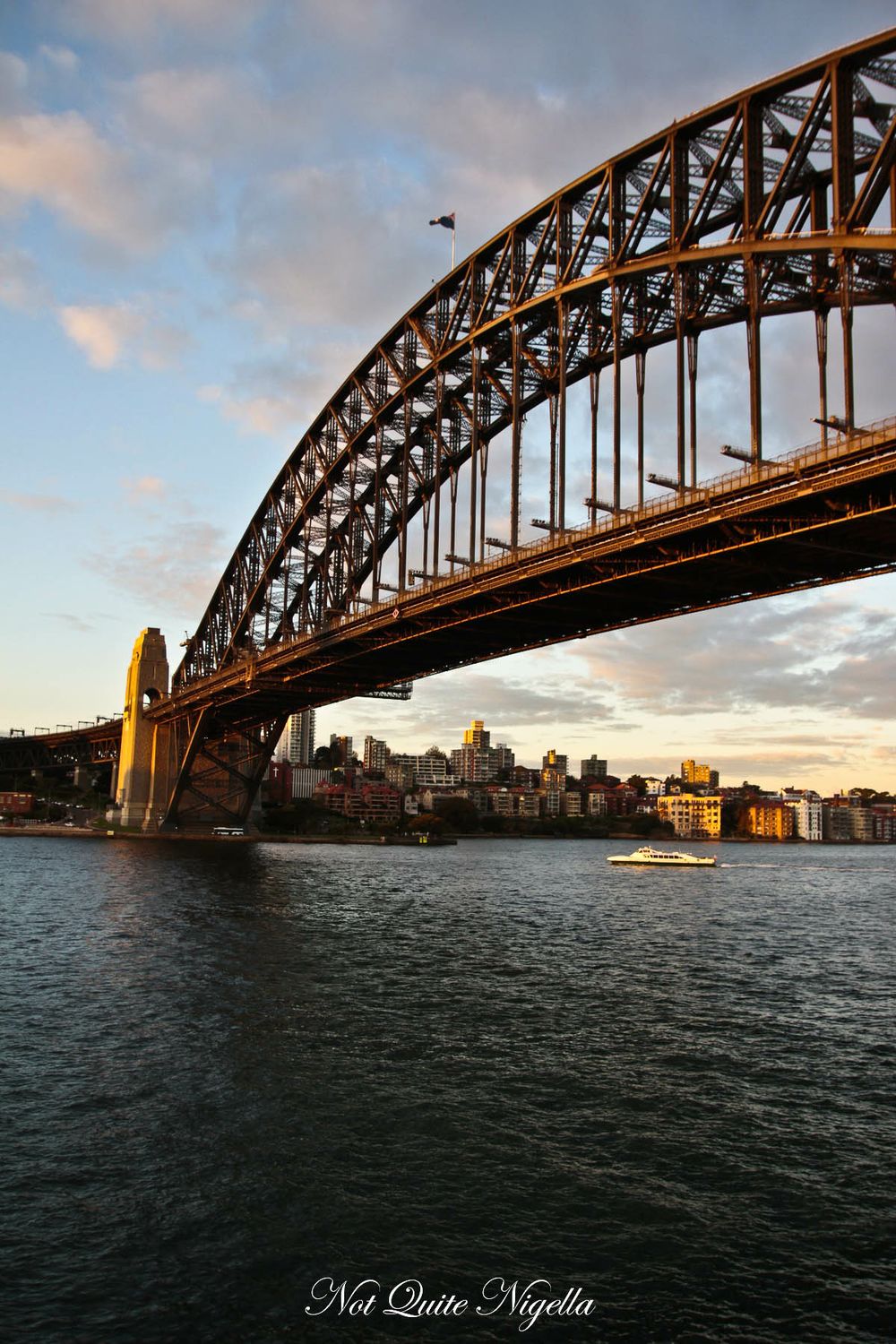 Oprah once said that when she first started to make money the first thing that she wanted to buy towels. Big, fluffy luxurious towels as opposed to small, threadbare ones. I must admit that I do have a small list of things that I will buy if I ever hit it rich and one of them in an egg shaped bath. And now that I've spent a night at one of the Harbourside Balcony suites at the Sebel Pier One, perhaps a twelve headed shower and a harbour view too. 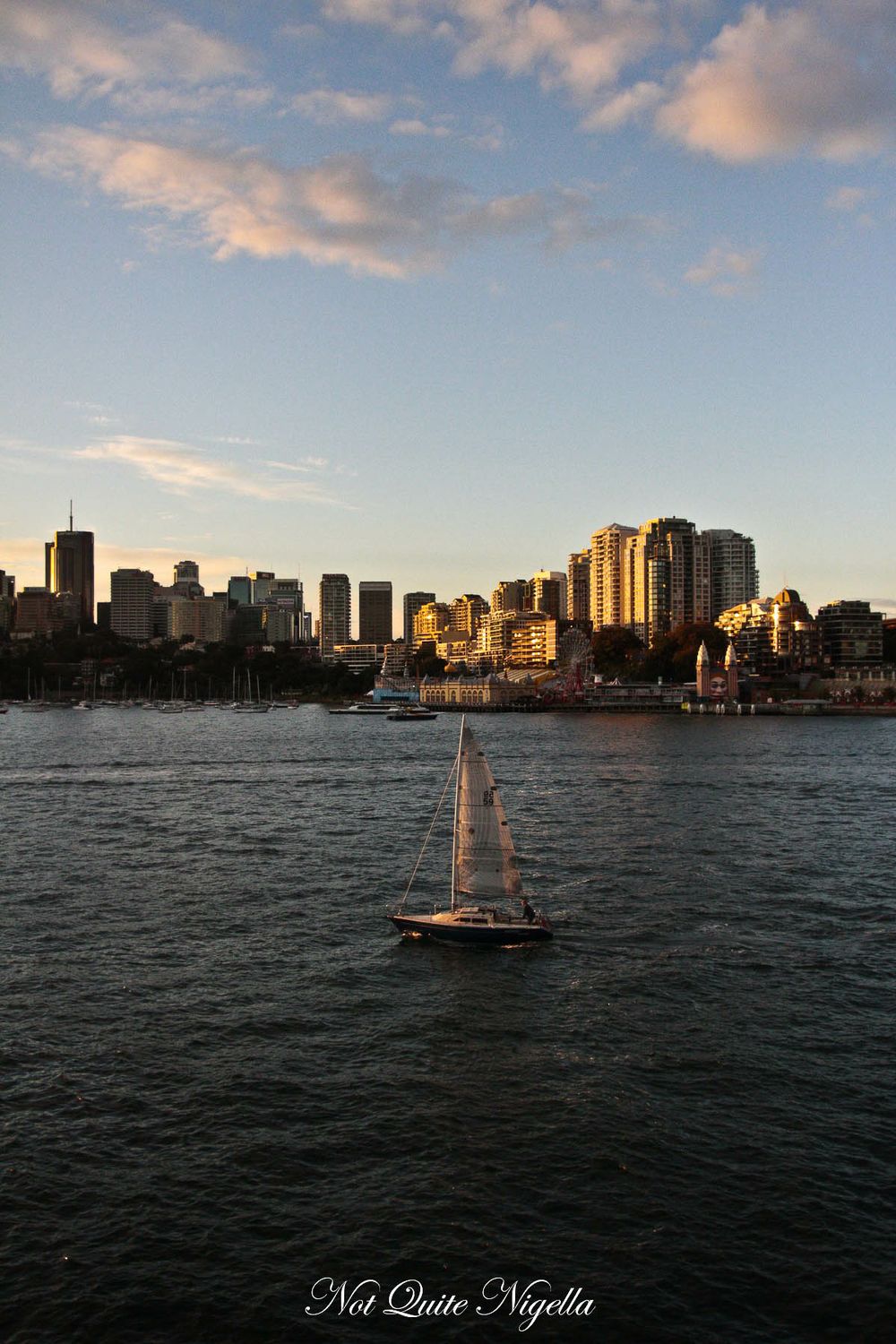 The Sebel Pier One is located in the historical Rocks district of Sydney. Its location means that the rooms take advantage of the waterfront harbourside location and the suites have floor to ceiling windows, neutral chic furnishings, Australian and French ornamental art and a luxurious feel. It's my birthday and we check into room 214, one of the seven architecturally designed harbourview balcony suites. They're enormous at sixty two square metres and all designed so that guests can drink up the panoramic harbour view. And what a view it is with the Harbour Bridge so close that it feels as though your fingers could brush the metal railings. 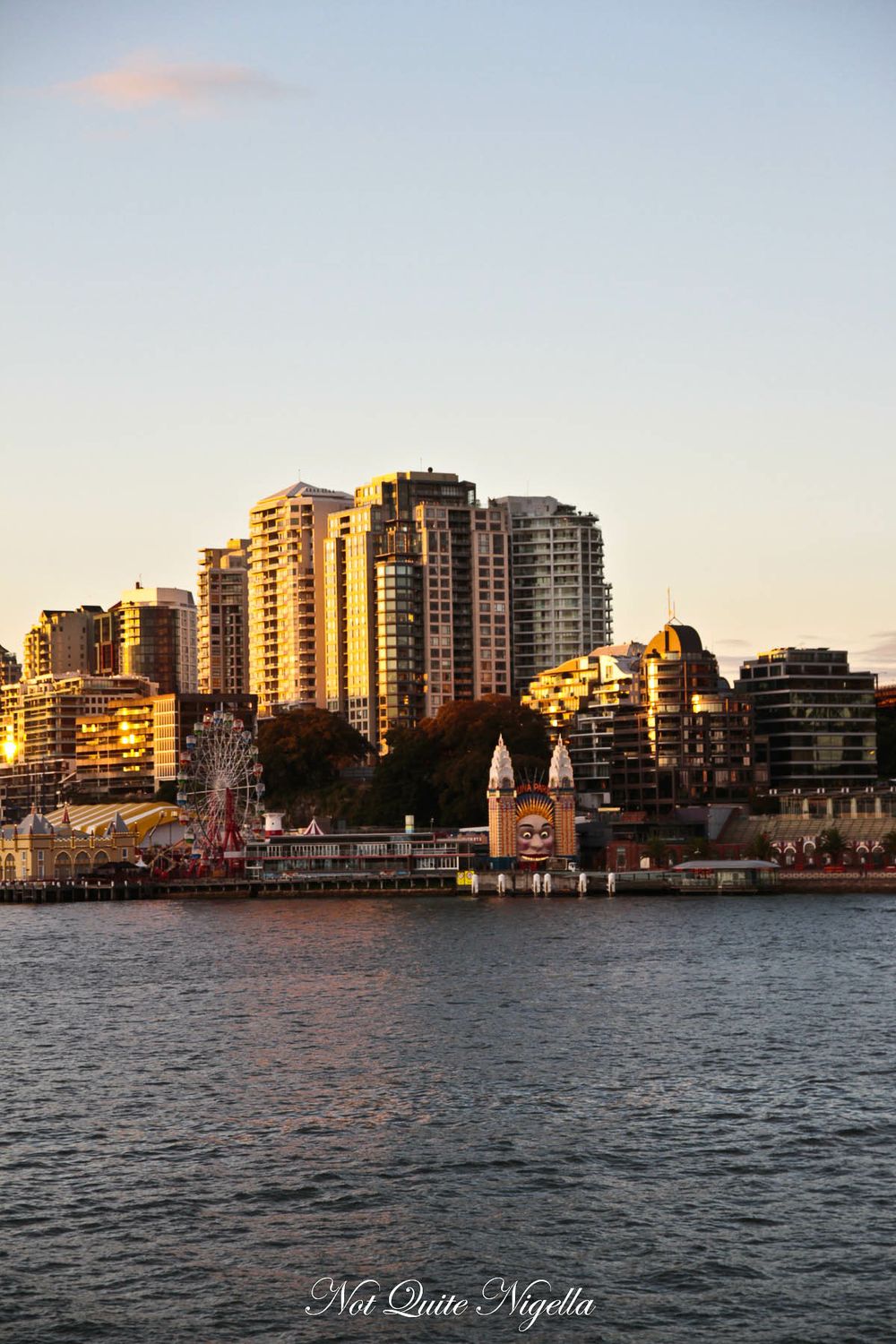 In front is Luna Park which descends into luminescence as dark falls and just below the water laps at the dock. There are plenty of chairs and day beds on the private wooden deck angled just so so that you can gaze out onto the water and even though Autumn has made her chilly presence known, it's still seasonable enough to sit outside in the afternoon sun and listen to the bustle of a city contrasting with the splashing of the waves and the occasional train making its way across the bridge or a ferry chugging past. Sunset is particularly stunning but nightfall is no second runner up with the sparkling lights casting reflections on the water. 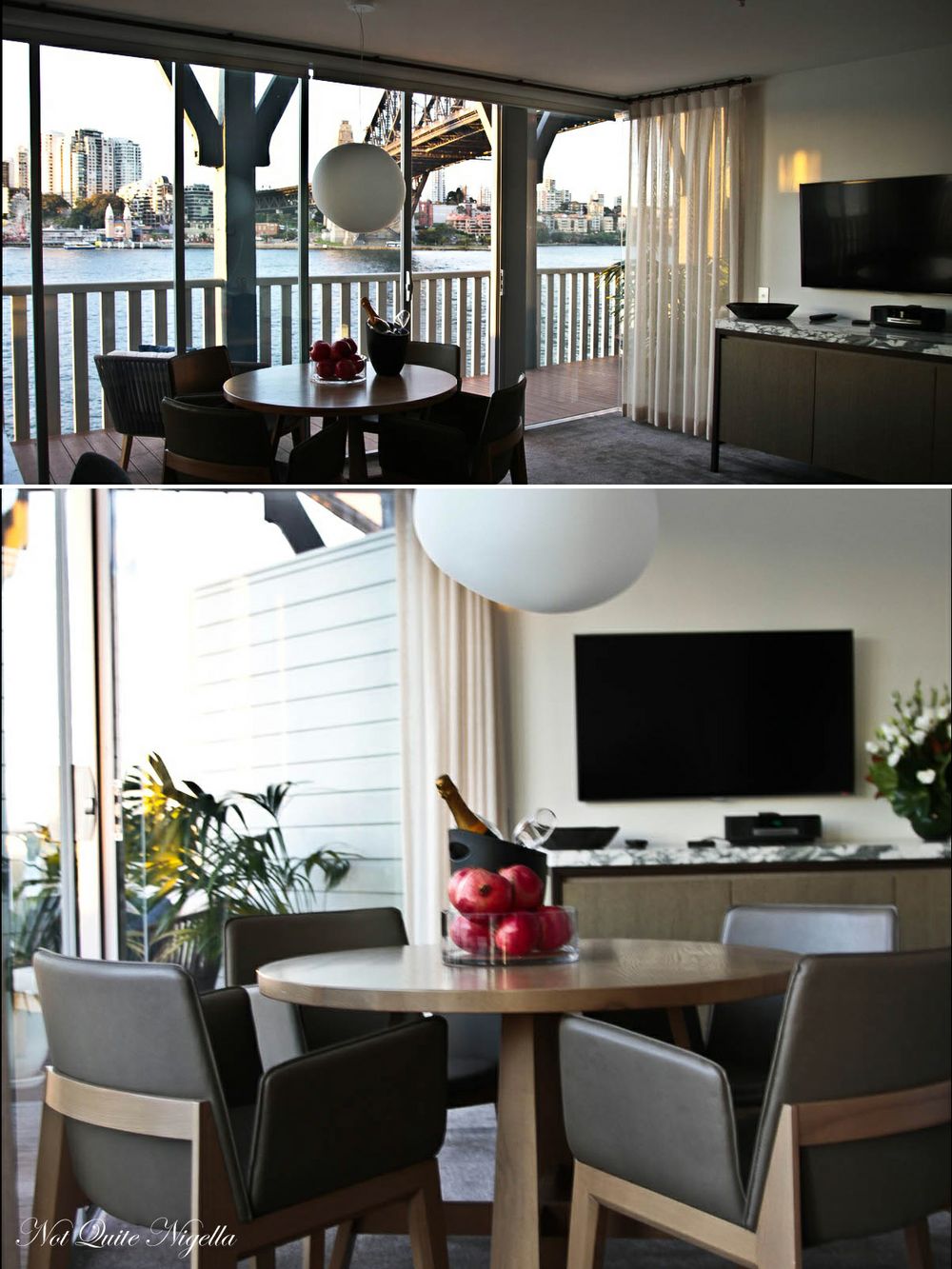 The suite is broken up into three rooms. The right most is the lounge or sitting room with a large flat screen television, iPod dock, day bed and table. A credenza hides the mini bar with a soft drink priced at $4 and Pickwick's tea. A marble topped wet bar has a generously stocked Nespresso machine and a tempting complimentary jar with a Willy Wonka-esque message saying "Help Yourself To a Treat :)." This contains my version of crack-peanut M&M's are addictive and I studiously ignore those and go for a wander into the main bedroom (I later find out that Mr NQN had eaten most of these). 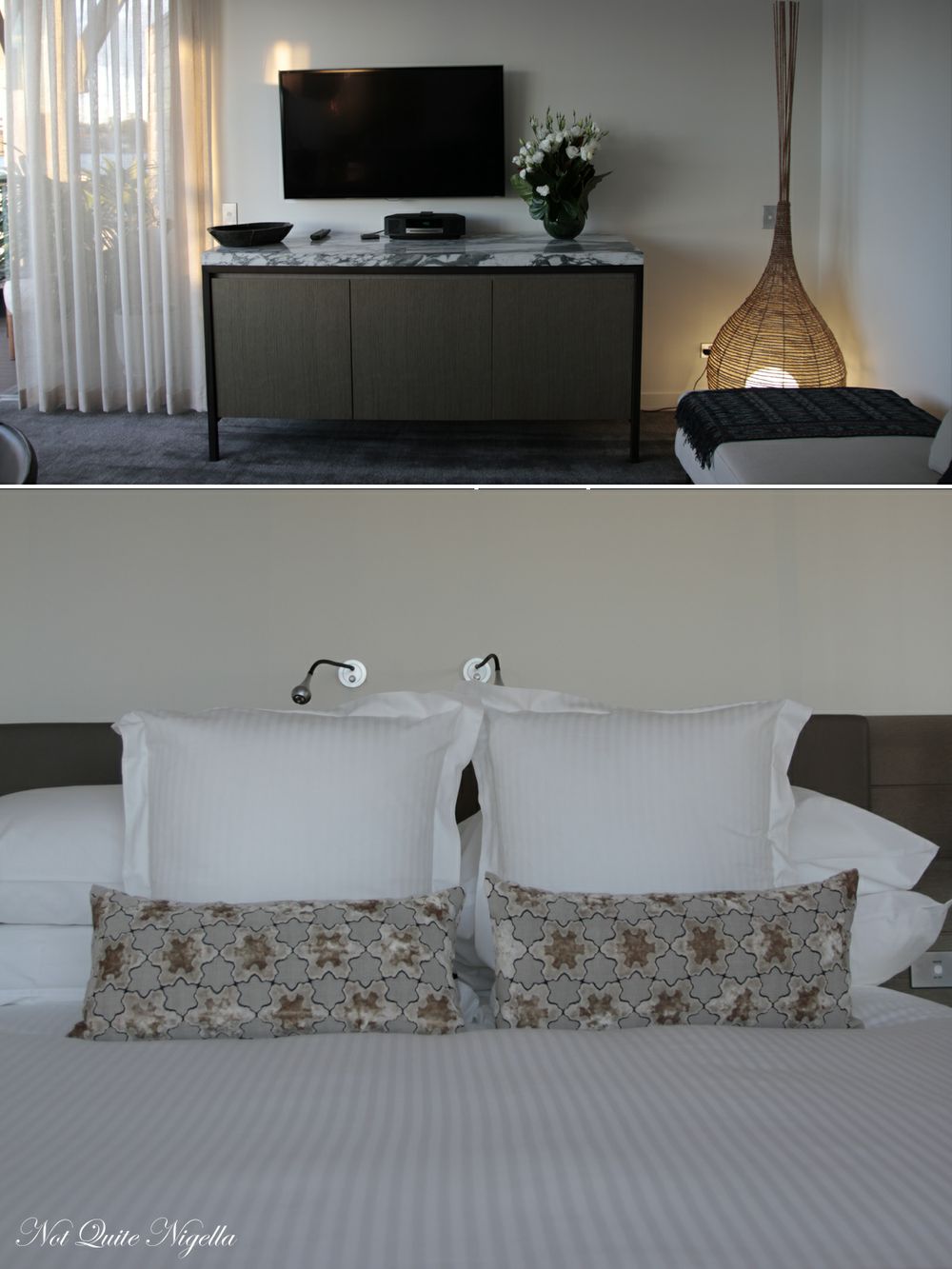 A king bed sits facing the view and a hidden television rises up or down at the press of a button and there is another ipod dock/alarm clock. The sheets are soft and there are four regular pillows and two European pillow and a soft quilt. 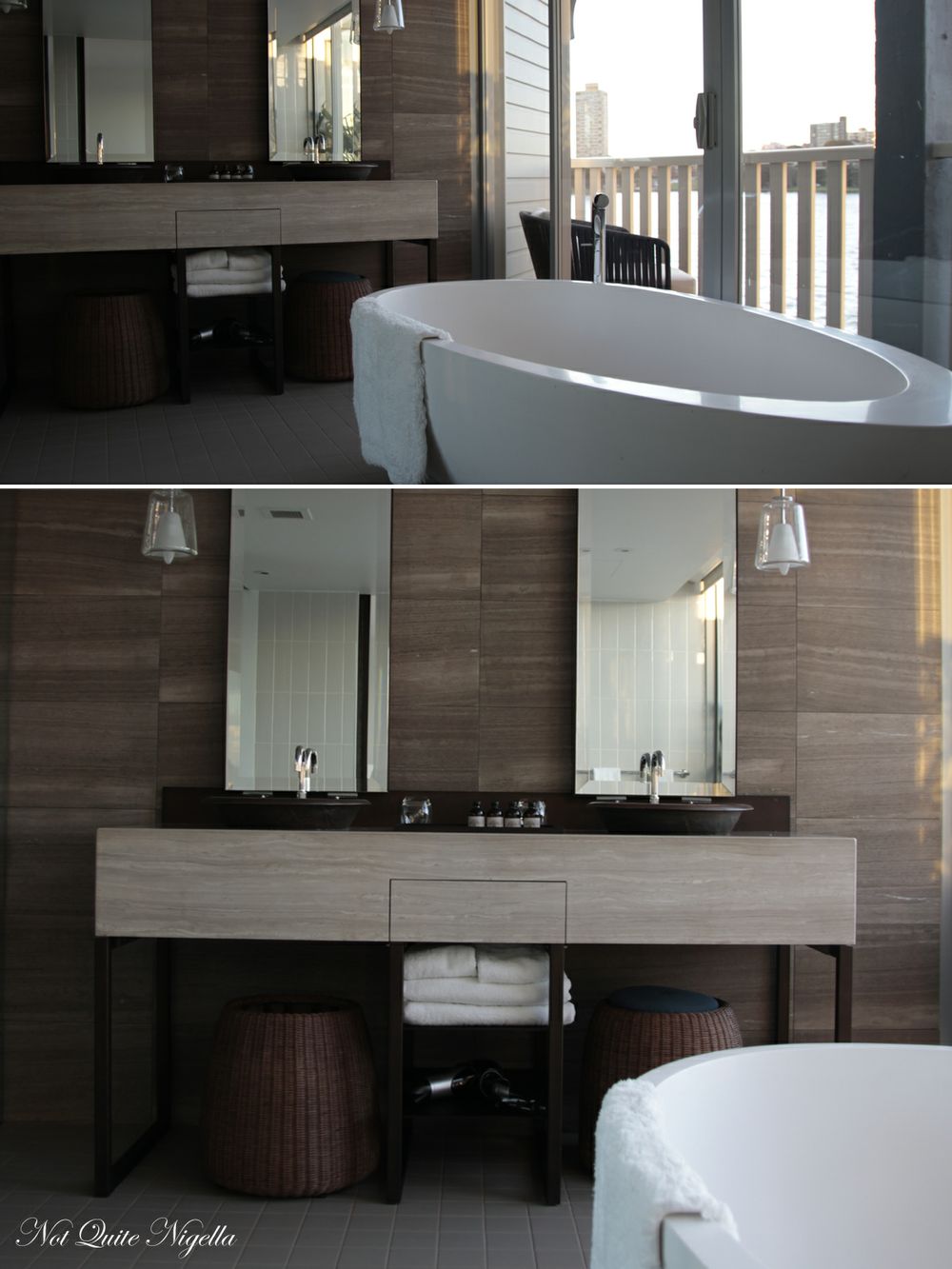 I have to admit that a good bathroom always impresses but this is possibly the biggest sell. Amenities are by Appelles Apothecary which is a great range of organic products with delicious, real fragrances in food scents like lemongrass, comfrey, rosemary and eucalyptus. The shampoo, conditioner, body lotion and shower gel are sizeable in 150ml or 5 fl oz. sizes and the amenity drawer is one of the more impressively stocked with a bath bomb, bath salts, bath caviar and two of the following: shaving kits, vanity kits, shower caps and toothbrushes. 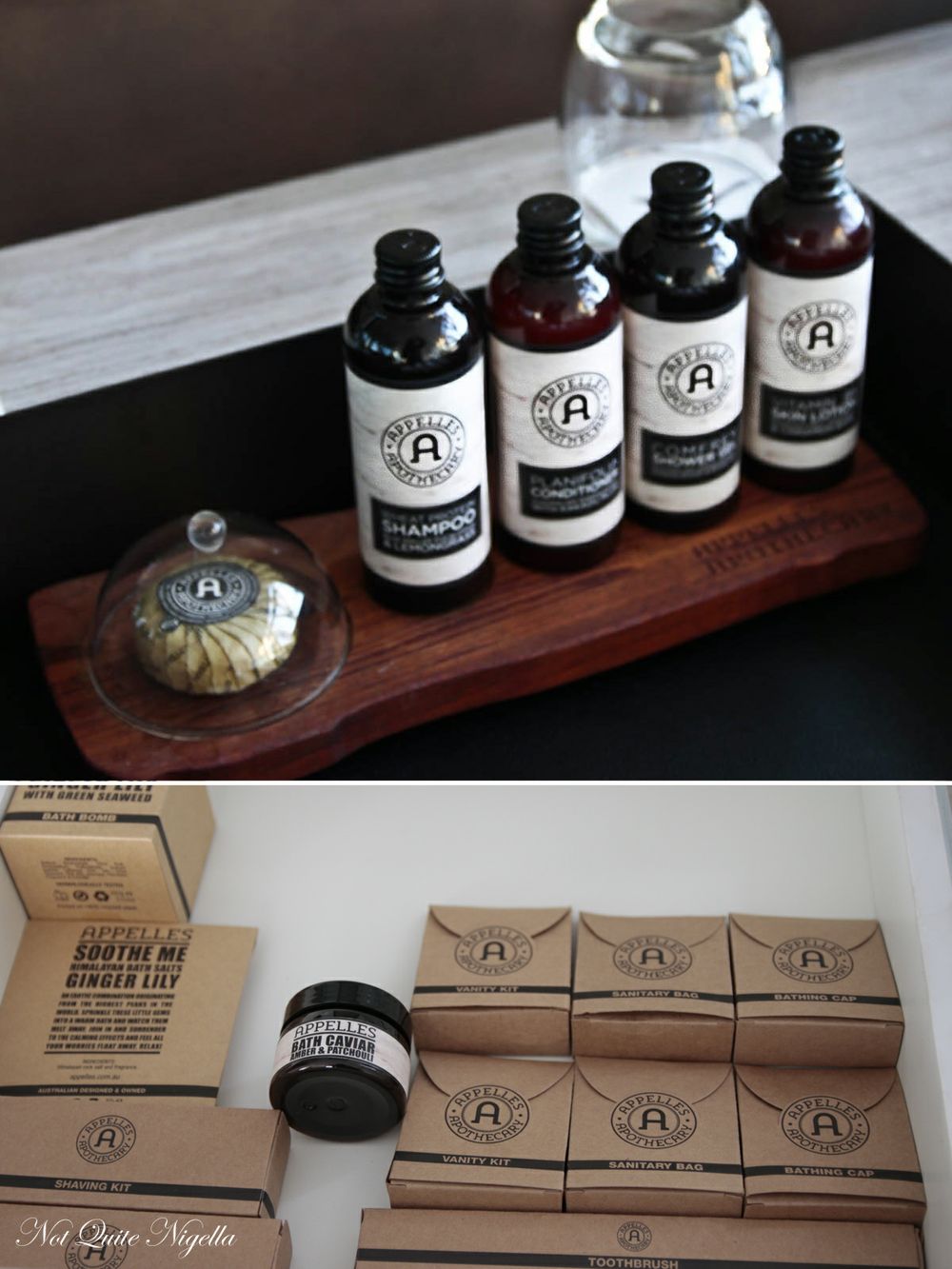 Two sinks and an egg bath sit in the enormous bathroom and the windows slide open so that you can bathe and listen to everything going by. And then you get to the shower. That's when things really get a bit rock star with a twelve head shower. Yes, things like this really exist.  And to quote Sidra from Seinfeld "Yes they're real and they're spectacular!" I hopped into the shower and turned on two of the sets which totaled eight heads. Turning one slightly cooler than the other also offers a really lovely sensation. There are a couple of drawbacks with the hotel and one is that there is no in house spa. The nearest one is about ten minute's walk away so it's not insurmountable but perhaps not ideal for those that like to drift upstairs after a treatment. Also the wi-fi signal is quite weak at that end of the building. 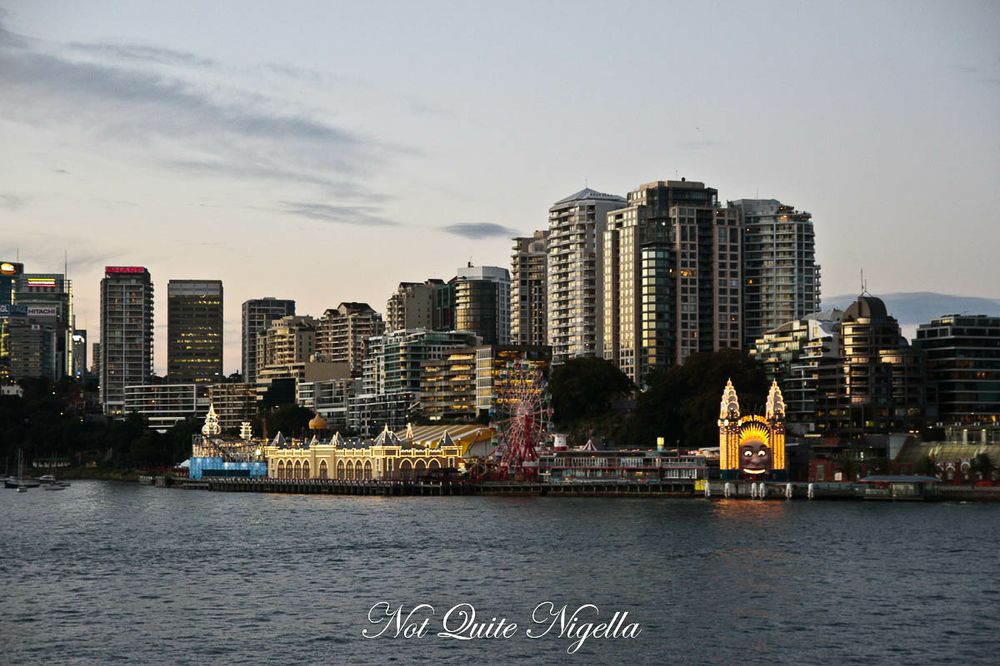 I spend the next few hours watching the view while sitting on the deck listening to music. Mr NQN arrives after a long day at work and dinner calls at 7.30pm and we make our way down to the hotel's only restaurant. Front restaurant is partitioned off with plastic layers and there are heat lamps. Those that are braver with the chill can sit out on the wooden deck and eat and drink from the bar menu. 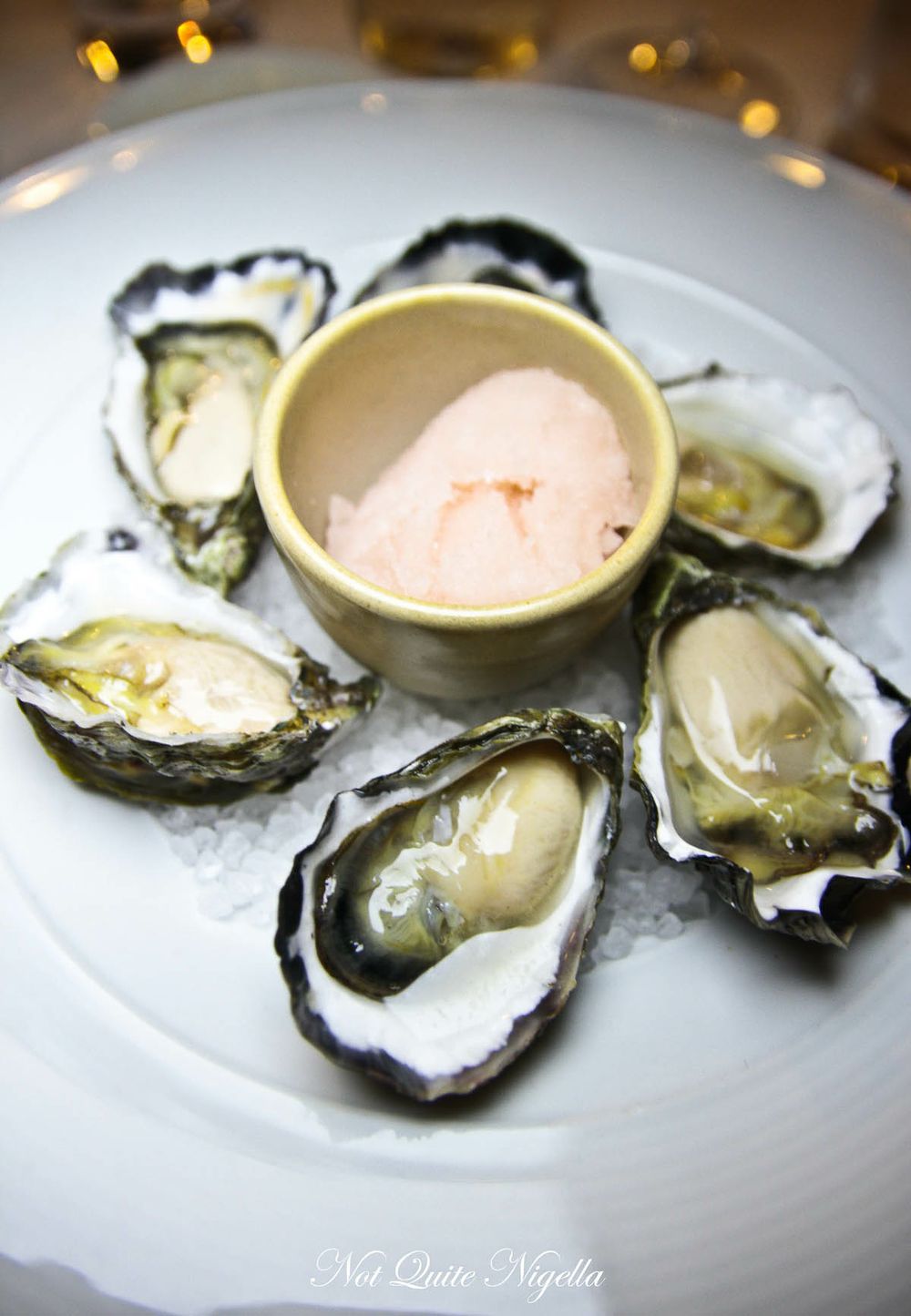 Our waitress is very good although there was some confusion with another as to who was serving us and taking the order. We start with some oysters and pork belly. The half dozen oysters are served with a sorbet which is packed with flavour. I think a wedge of lemon would have been a nice touch too in case some didn't like the flavour or thought it too strong. 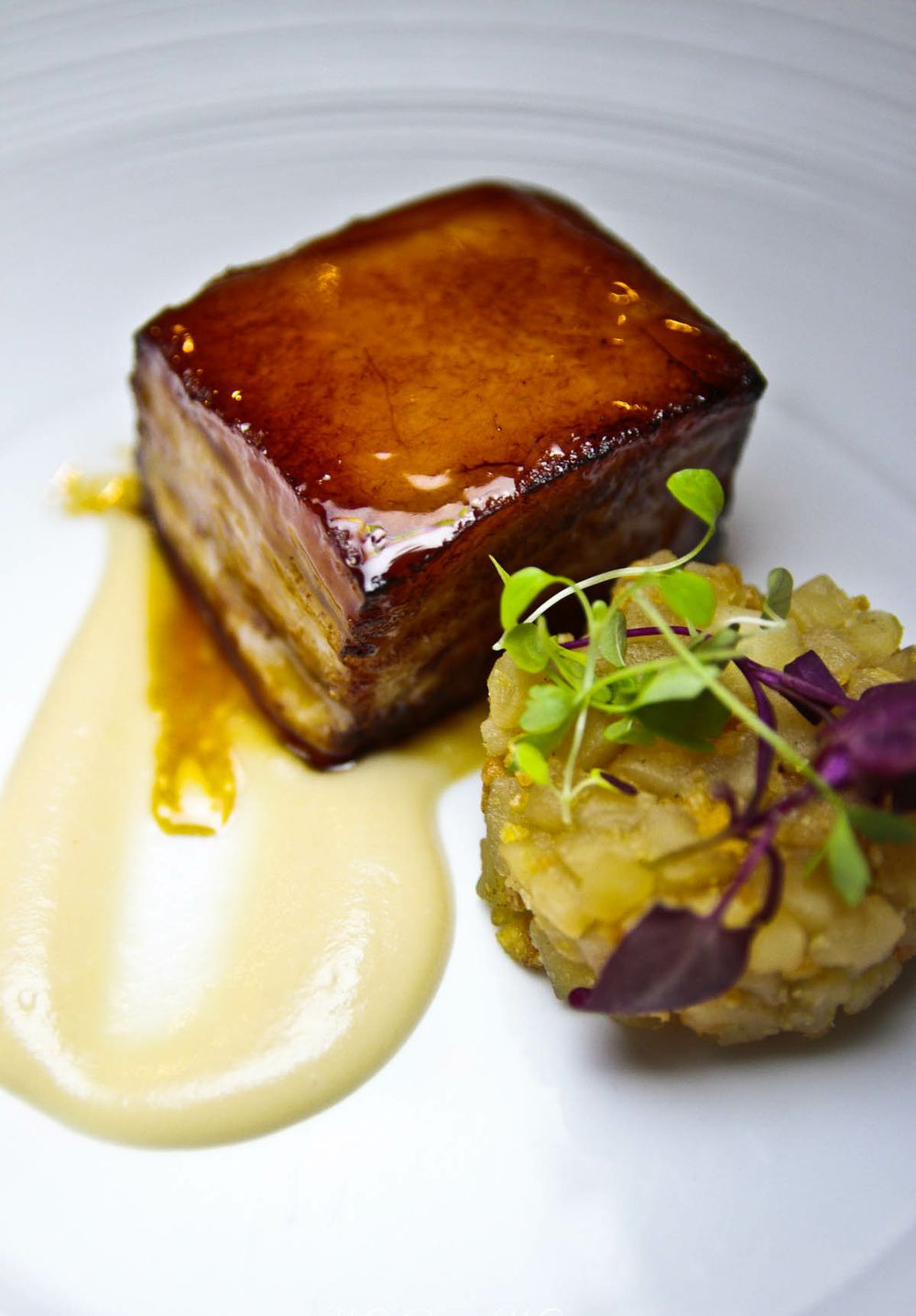 The pork belly was softly unctuous and delectable. The neat square had all of its soft, melting layers and it was accompanied by a puree of apple and a diced apple and crackling salad with crunchy little bits of crackling interspersed throughout it. And it was reluctance that I swapped this! 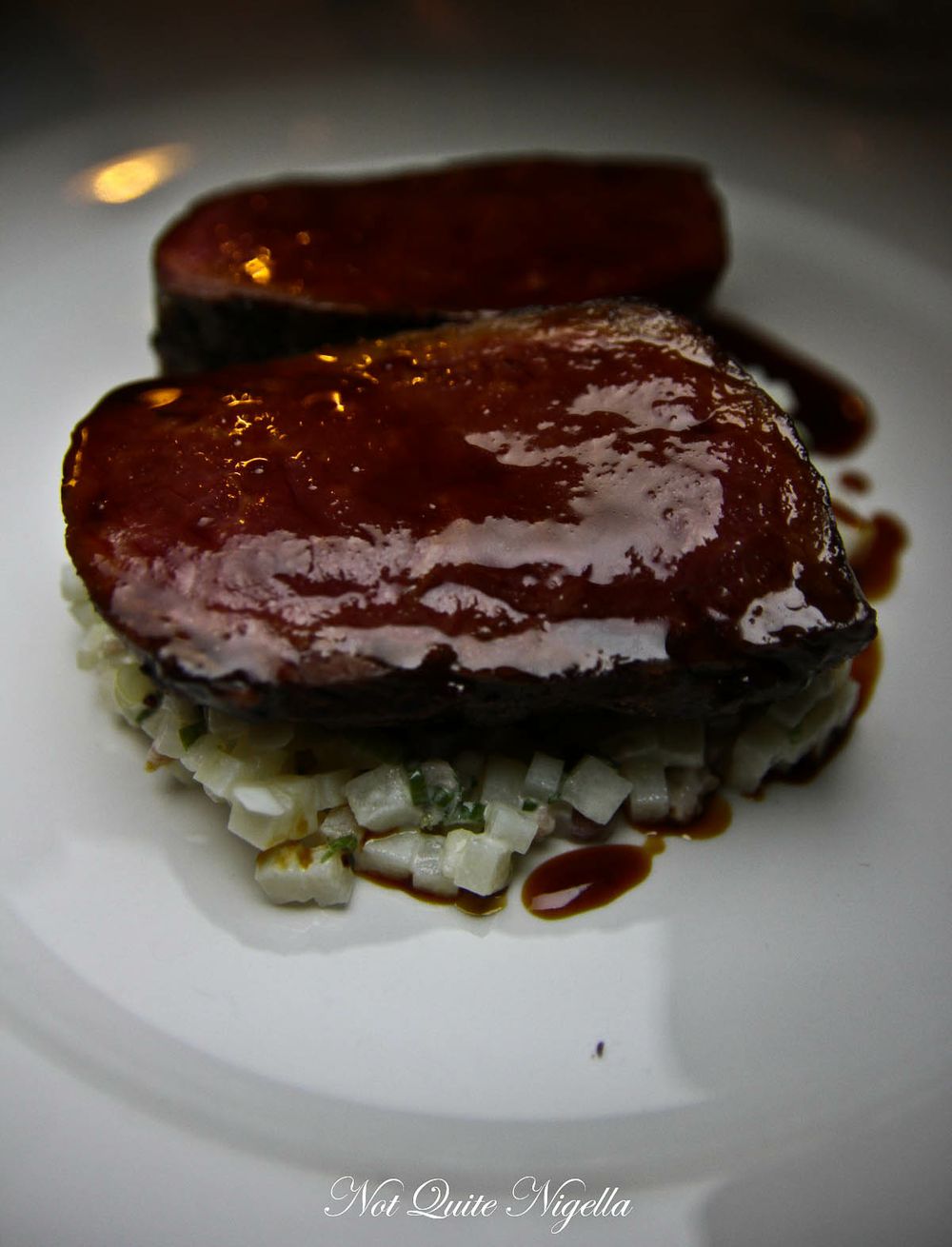 Our mains were the steak which was served on a finely diced potato salad that had the aroma of coleslaw but was made with potato. The steak was cooked medium rare and was fairly tender. 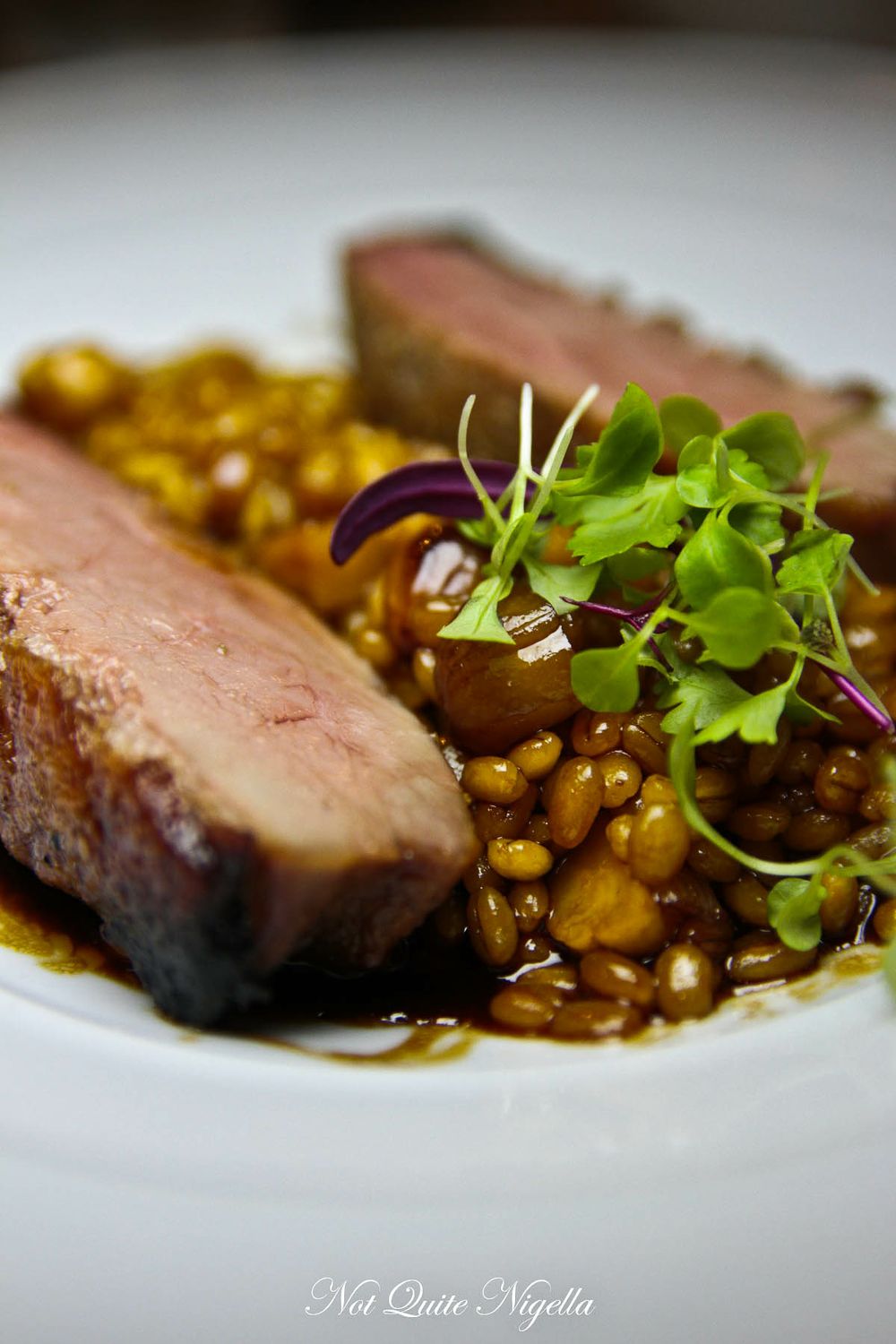 I ordered the duck because I had eaten a duck dish at an earlier function at the restaurant a month before and really enjoyed it (it was by far some of the best function food I've had) but this one wasn't quite the same. The slightly livery duck was accompanied with eschallots, chestnuts, hazelnuts, pearl barley and jus and whilst I like the seasonal ingredients, the function version was much better. 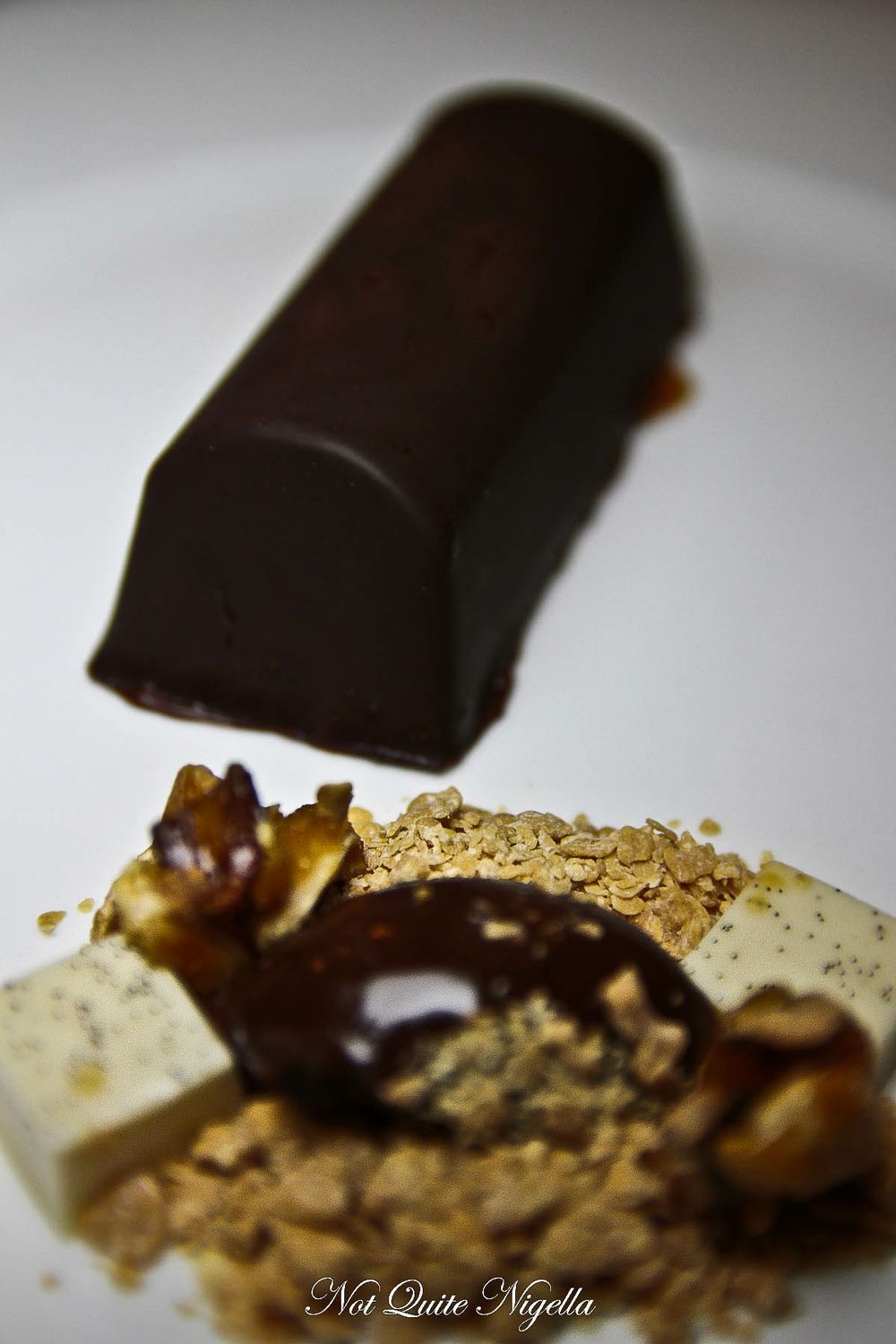 I ordered this because I had also had something similar at the function but served as a single round tart. And strangely enough I preferred the tart version to this as once you broke through the thin layer on top the salted caramel oozed out and there were some crunchy caramelised peanuts in the centre. This one had more elements to it and didn't really need them. 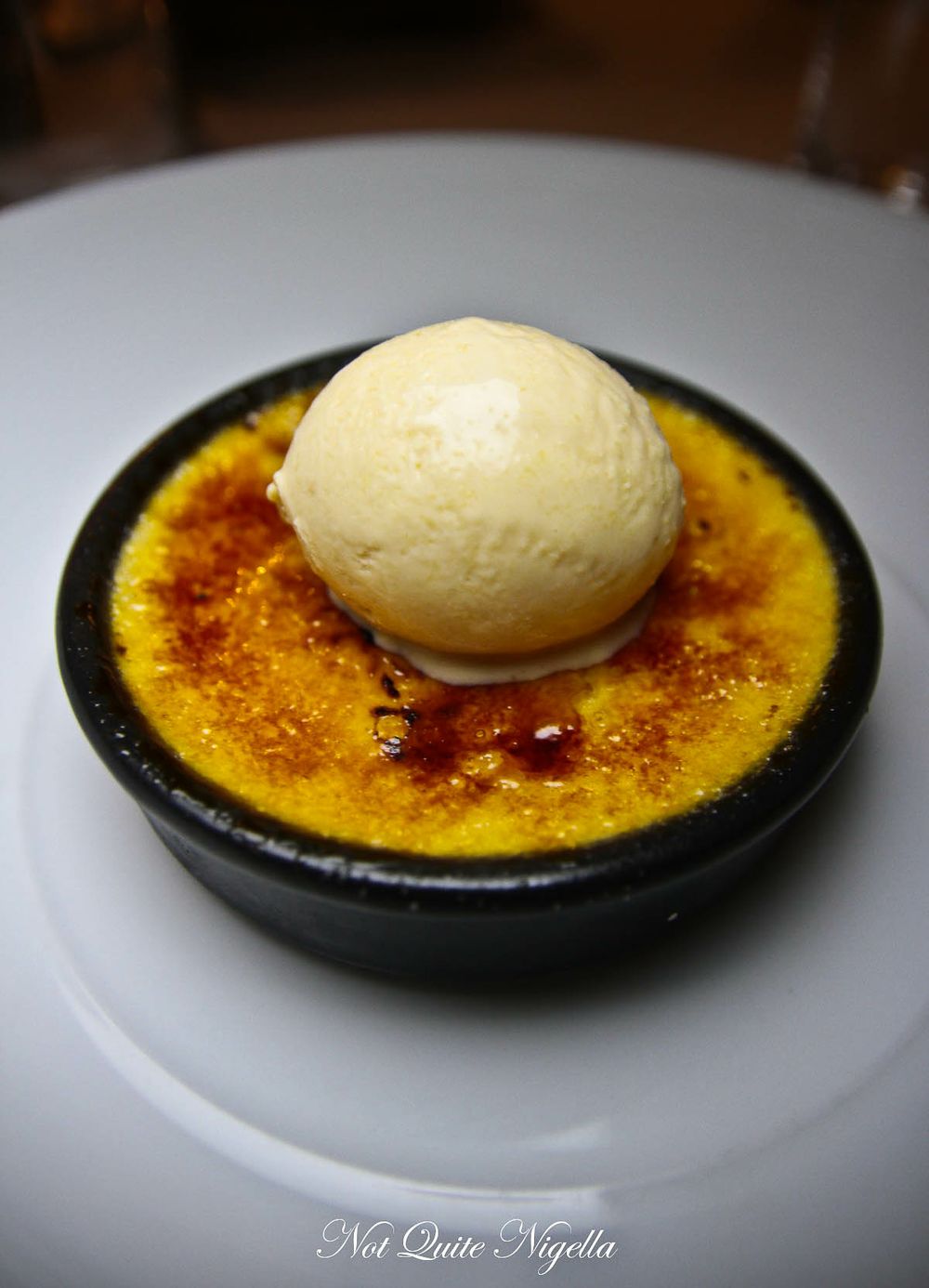 I don't usually order creme brulee but I was intrigued by the croissant ice cream. I thought that it might be like the baklava ice cream at Xanthi but instead no croissants are actually used but they get the flavour of croissants in the ice cream. It tastes a little like Horlicks or malt powder. The brulee is smooth with a thin crackle layer on top and there are little pieces of cooked diced apple throughout. Mr NQN loved the apple but I would have preferred it without but it's not like I'd kick a brulee out of bed at any time. 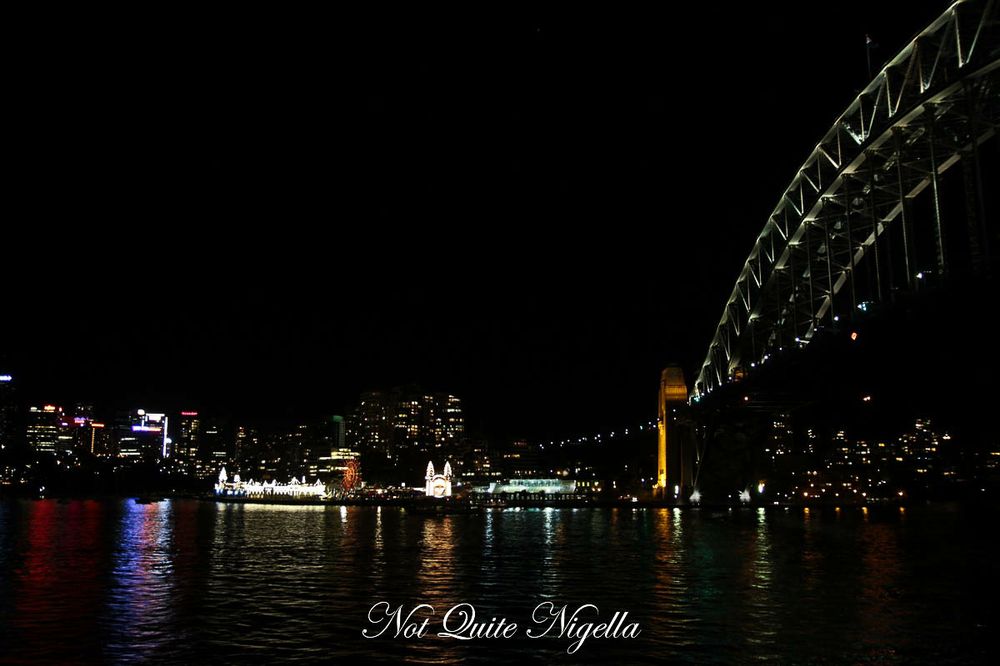 We adjourn upstairs and run the bath and deposit the bath caviar in it. Surprisingly it doesn't take long to fill and we switch of all the lights and climb in and watch the twinkling lights of Sydney sparkling against the inky darkness of night.

So tell me Dear Reader, if you struck it rich, what is the first thing that you would buy?