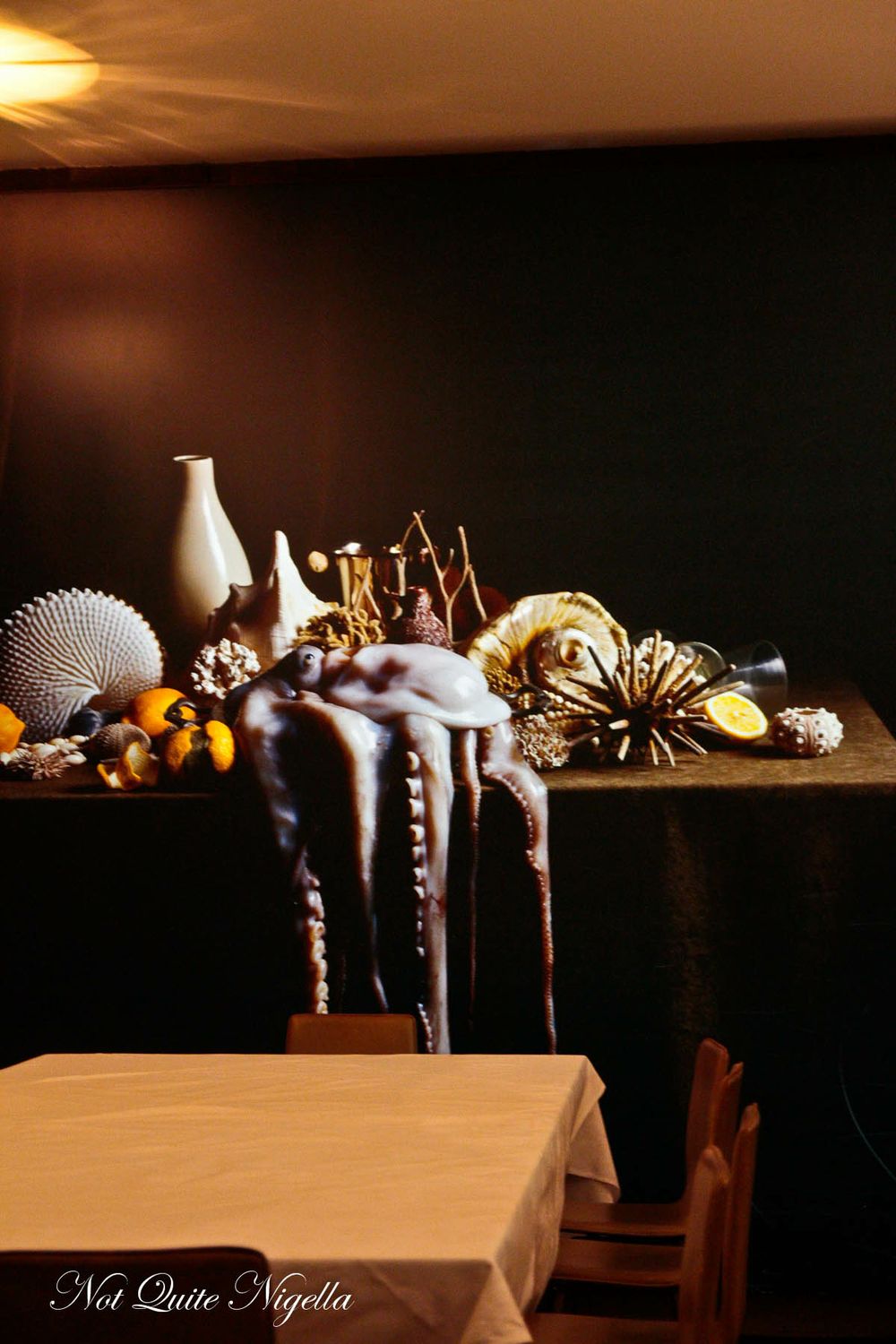 I remember even just a few years ago and truffles were one of those things that you only really heard about but didn't really see much of. About ten years ago I was in London and I saw small truffles in little jars or larger fragrant specimens nestled within a wooden box. Some were cheap while some seemed to cost the earth, the latter you bought by the gram and treasured and carefully cooked. It's only a few years later that the truffle industry in Australia has grown to accommodate our love of these aromatic, sensual fungi. Now truffle dinners are held celebrating the truffle's winter season and at Rockpool on George's July 18th Winter Truffle Dinner, it is an annual event. 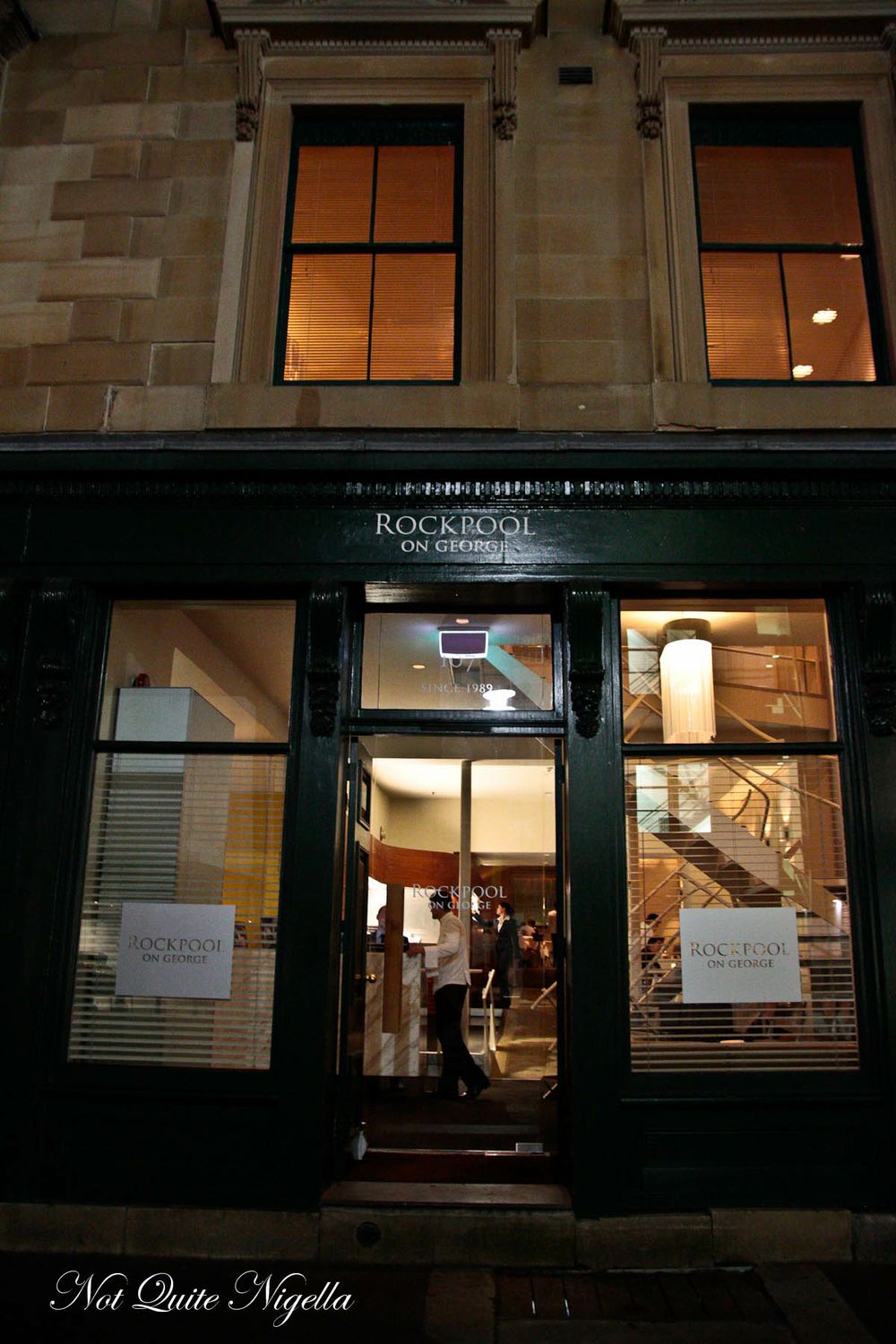 About 80% of the guests this evening are having the truffle menu compared to the first dinner three years ago when there were only half a dozen. It was small enough that they devoted just the second floor to the truffle eaters which is a contrast to the numbers of people inhaling deeply to register the scent of the intoxicating truffles when their dishes are set down. Also, with Rockpool on George closing in October this year and relocating nearer to the Rockpool Bar and Grill at the Burns Philip Building, regulars have tried to book in for the last night of service and tried to buy chairs. "I've sold ten chairs already!" the maitre'd quips. 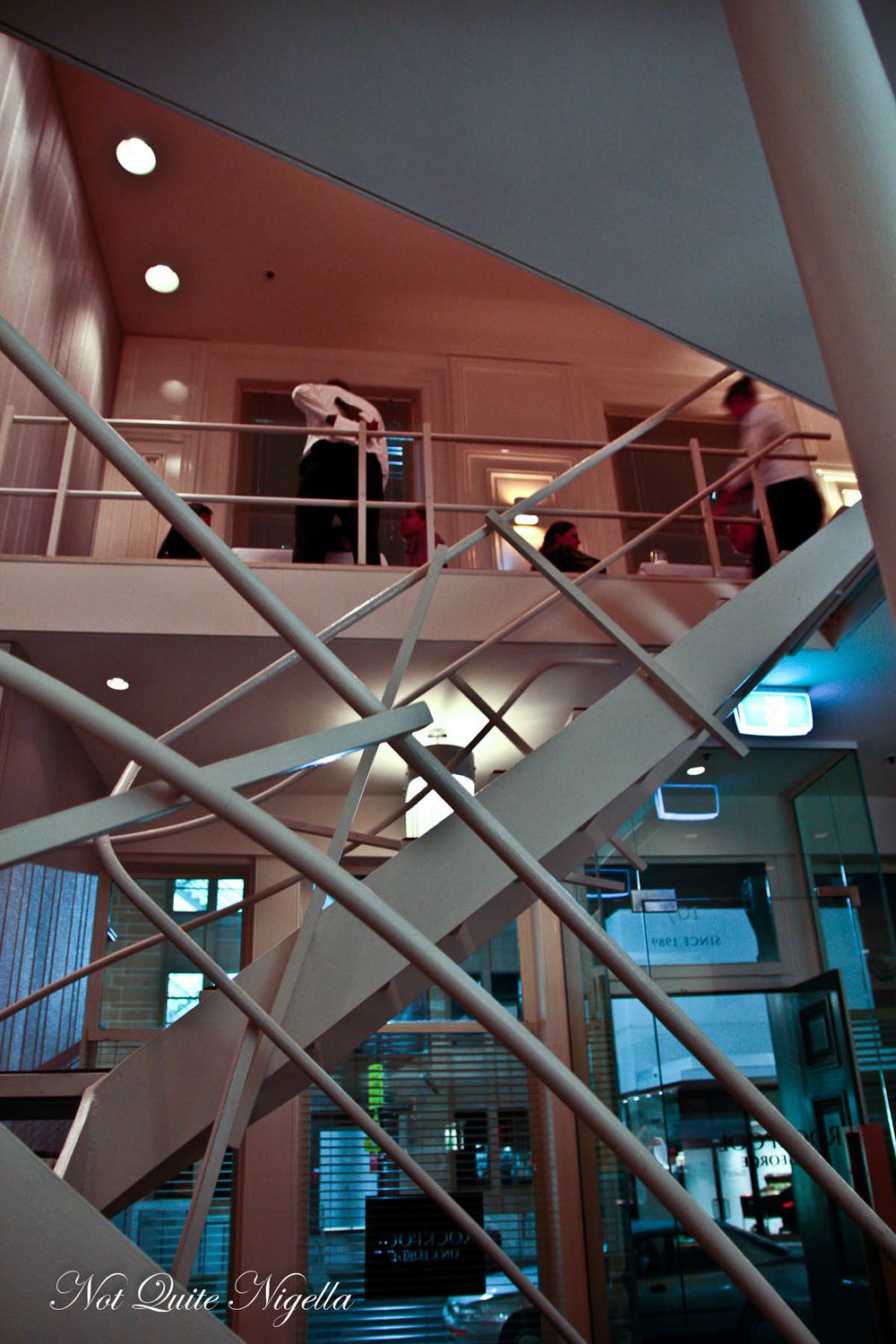 The tariff for this evening is $260 a person or $360 with matching wines. The truffles are a mix from Manjimup in Western Australia, Tasmania and the NSW Southern Highlands truffles. I can smell the truffle in the dish at the table right next to us as a solo diner's plate is set down. She takes a photo and slowly eats it considering every bite. We're sitting opposite the kitchen where Head Chef Phil Woods and his team are busy at the pass. 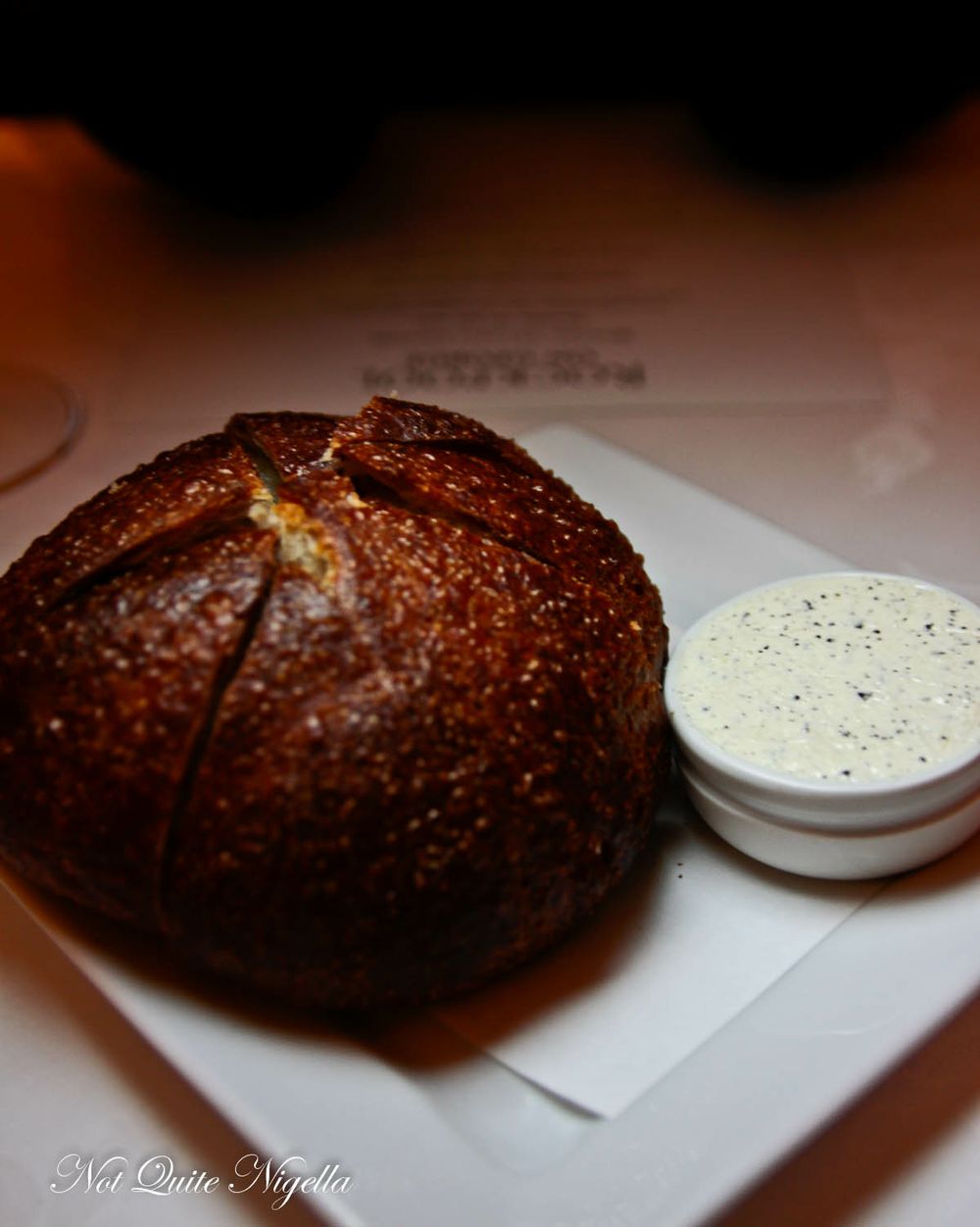 Our first bite hits the table and it's a round loaf of honey spelt bread, with a soft, spongy interior and a crackly crust. It is served with a heavenly salted whipped truffle butter which is made in house. 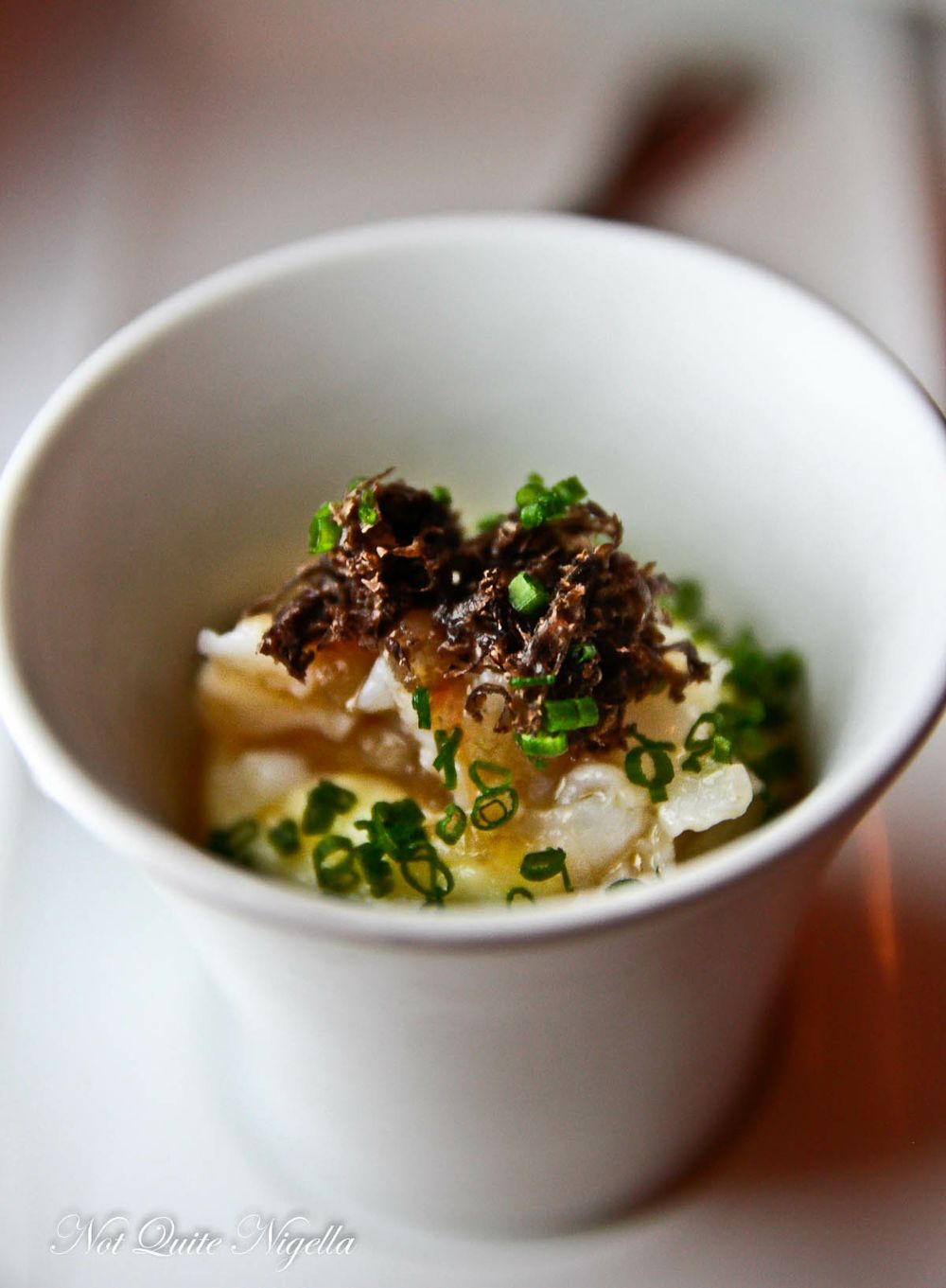 A small mouthful comes out next and it's our first course. It's Queensland spanner crab with a creamy and thick truffled potato puree. There isn't a great deal of spanner crab in this and the main flavour is of the creamy, buttery mash paired with the truffle. It's very rich and the three spoonful's worth is the perfect size. 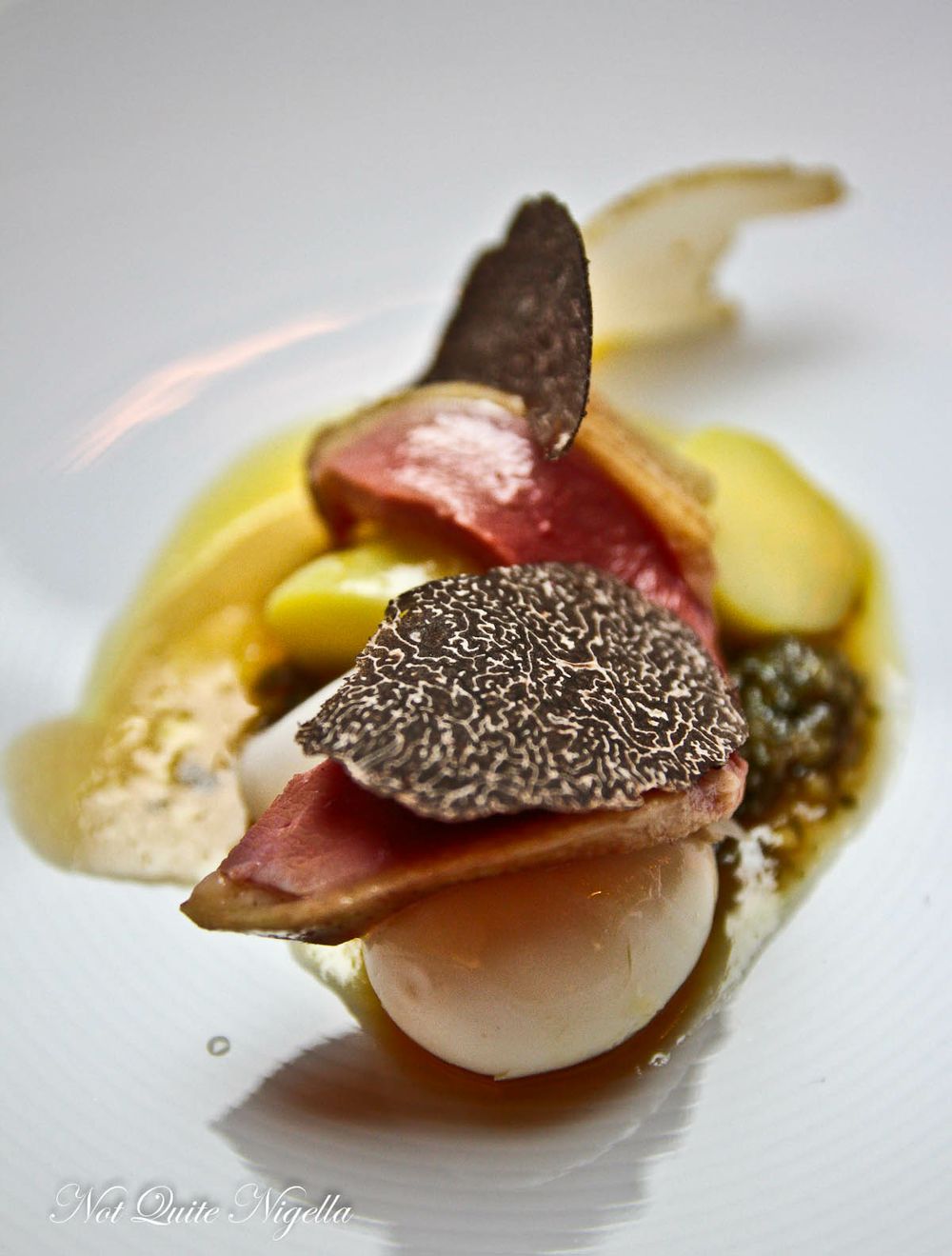 The drunken pigeon comes as two rose pink slices of pigeon with a soft centred quail's egg, kipfler potatoes, slices of abalone and two pieces of truffle. It's an Asian flavoured dish with the flavour of Shao Xing wine and the creamy, oozing centre of egg yolk and white is made for mopping up with the bread. 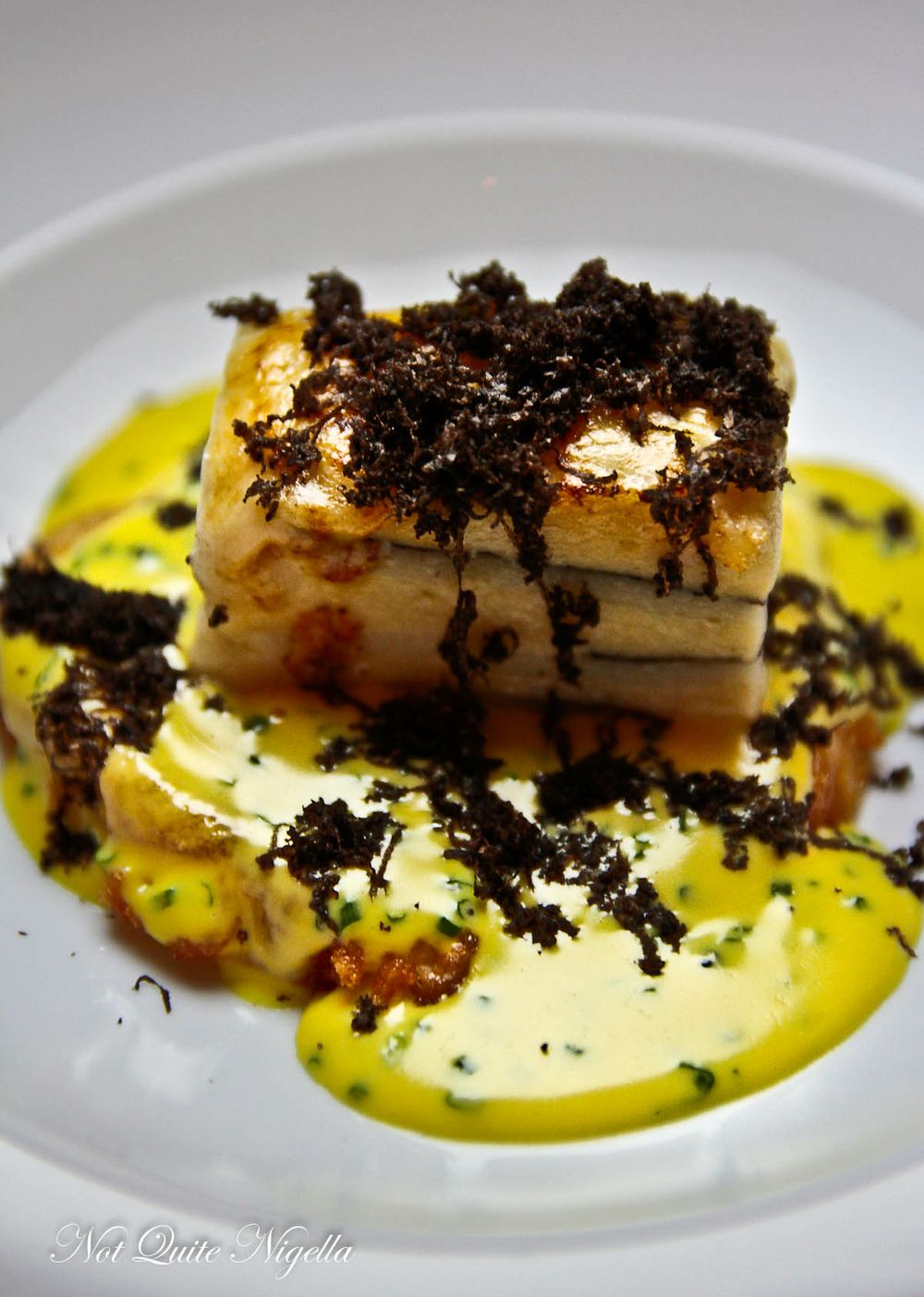 The lobster and truffle lasagna is an interesting dish. There's a round lobster omelette at the bottom and on top of this is layers of soft, delicate, spongy potato and flour based dough with truffles layered in between these layers. The sauce allemande is quite a sweet sauce which dominates the dish and even though there is truffle between the layers of lasagna, the sweetness of the sauce really draws the attention away from the truffle. 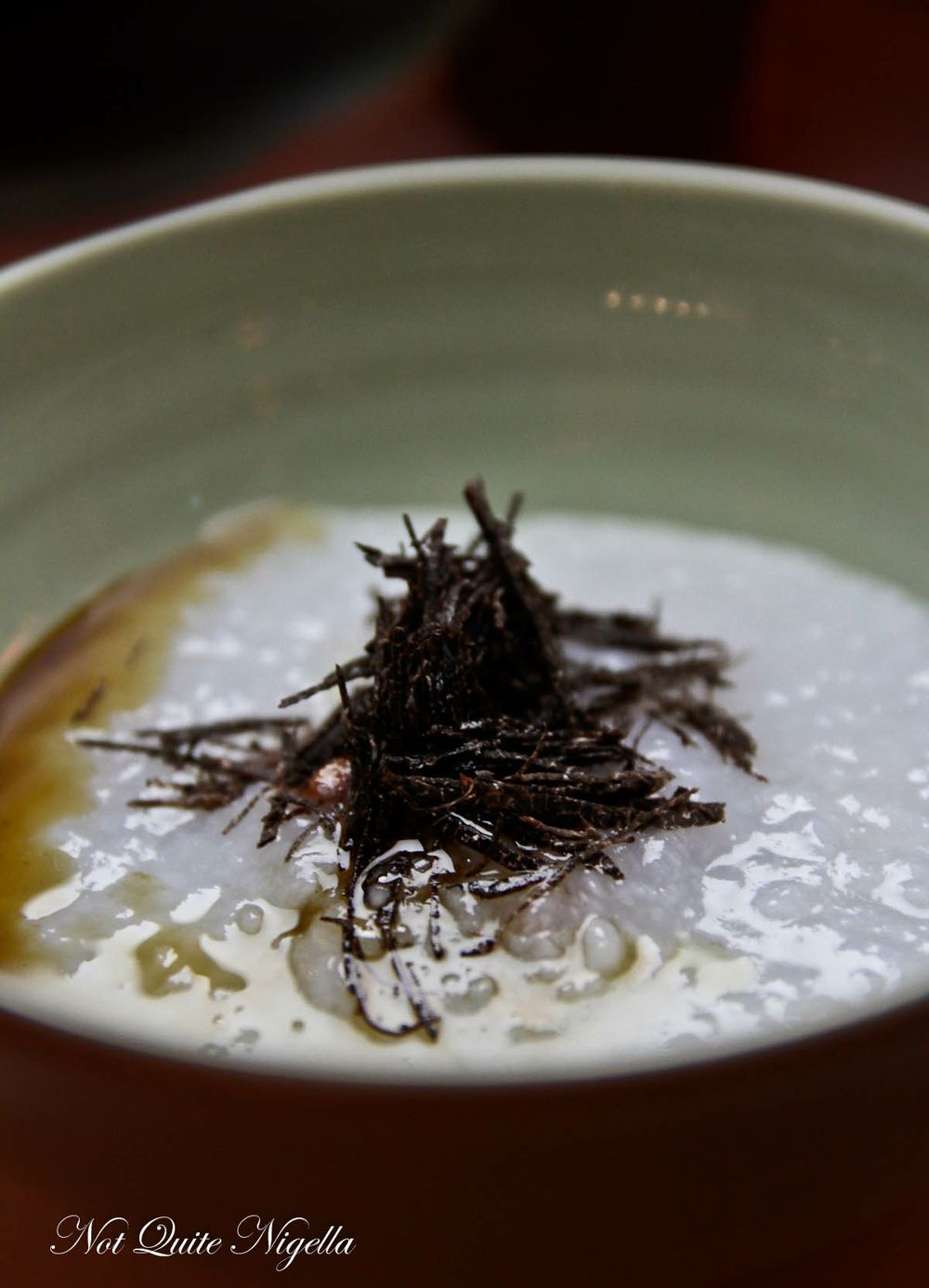 The congee is a rice porridge dish with preserved eggs, thick cubes of bacon with a round of mushroom custard and truffle ketchup. It's a very soft dish with lots of soft, comforting and custardy flavours. Adding texture are the unique kinugasa or bamboo pith mushrooms that grow on rotting bamboo cane. They have an unmistakable spongy and slightly crunchy texture to them. And what is truffle ketchup? It's a recipe from Mrs Beeton's cookbook where mushrooms and salt are fermented in a 3:1 part solution for two weeks and then heated for two hours to pasteurise the sauce. It is seen as one of the first versions of ketchup before tomato ketchup came about. Here they pour a little over the dish at the table. 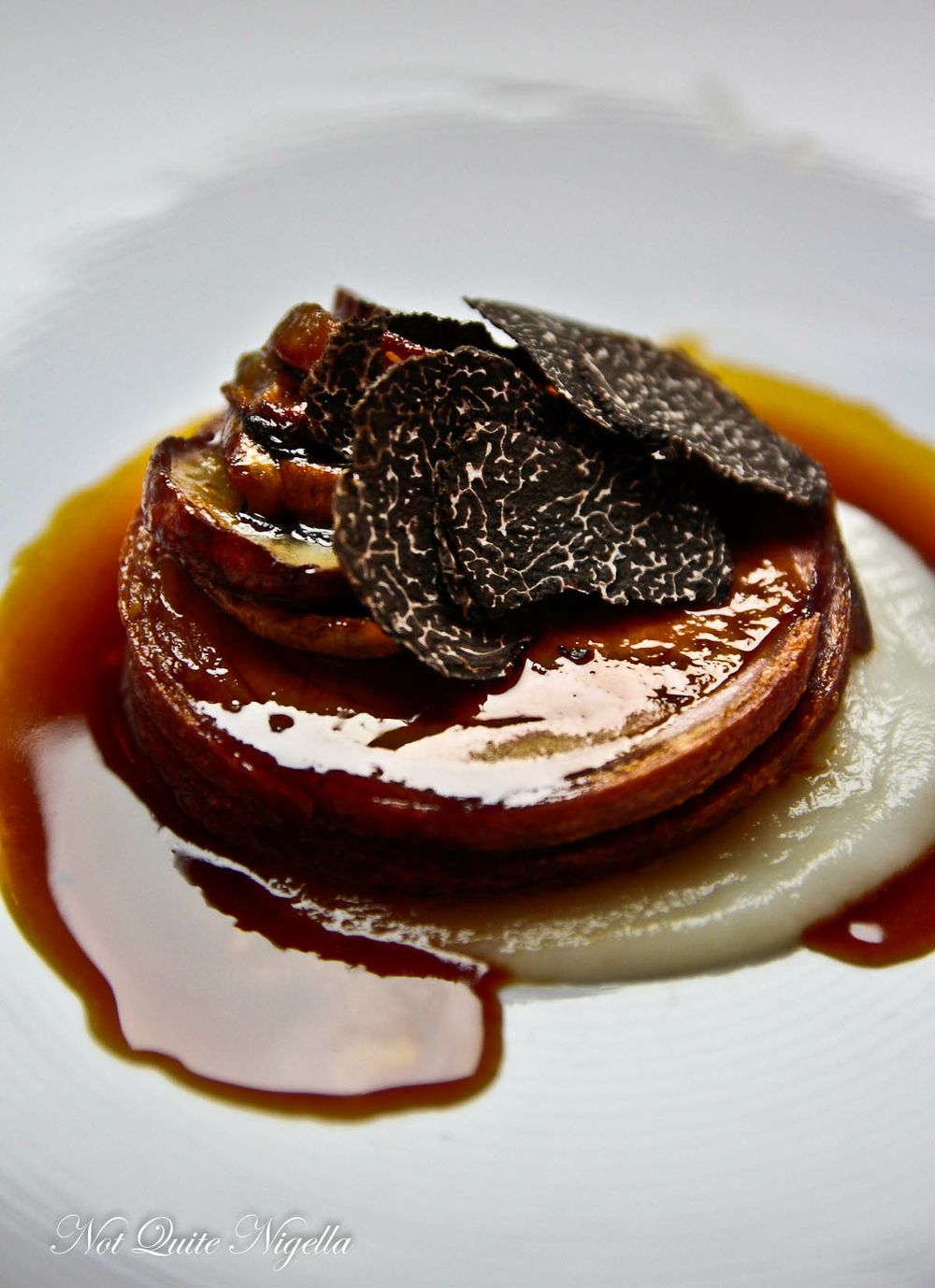 The suckling pig comes out as a round slice of salted, tender pork on a bed of roasted Jerusalem artichoke puree and sliced truffle. The stickily gorgeous slices of seachoke that resembles apple gave the salty pork a sweet balance. 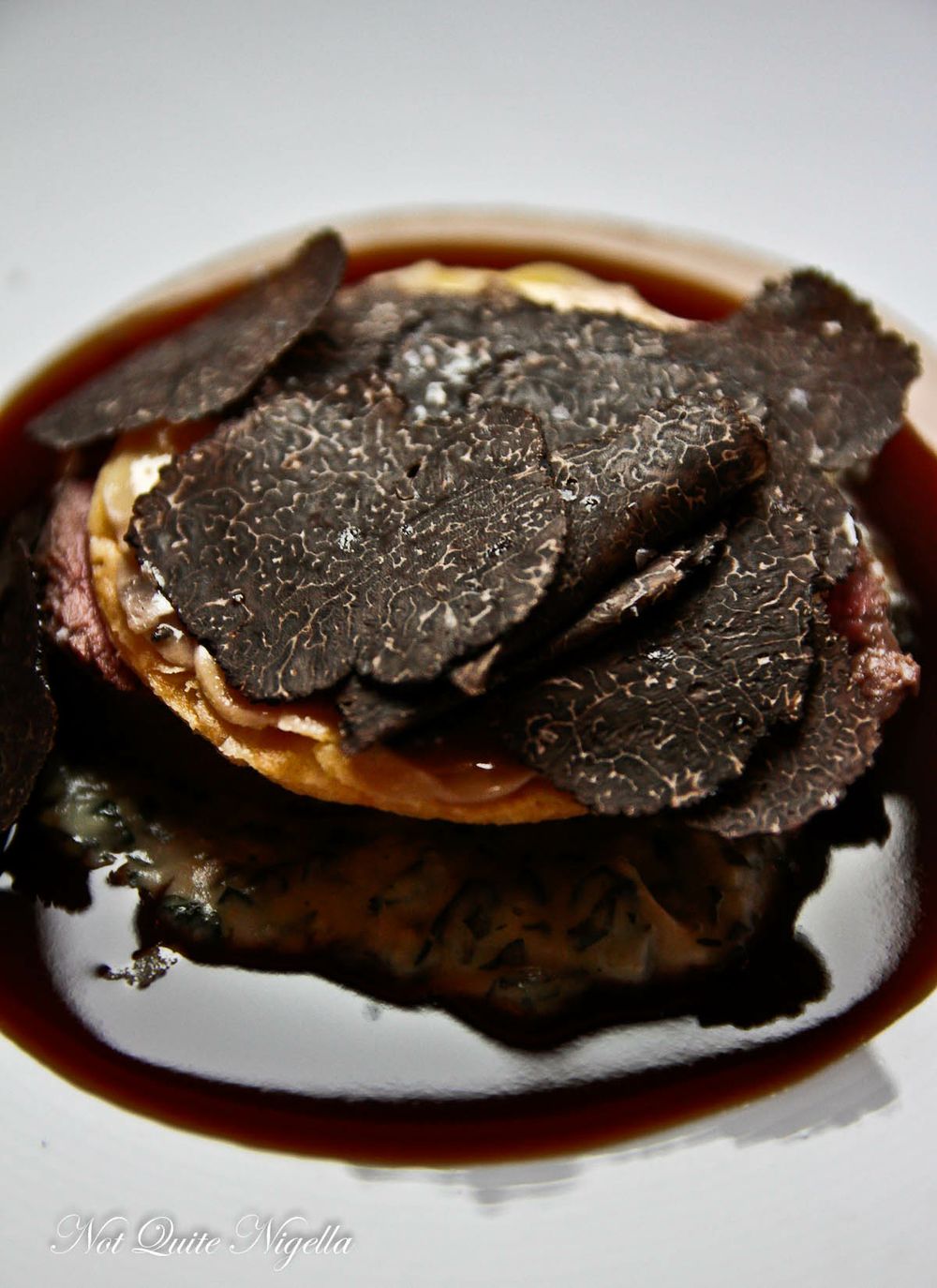 This was our second last course and by now I was getting very full. But then they put down one of my favourite courses of the evening and I found space. At first, visually speaking I thought that they'd given us the same course as before but it wasn't. The truffle beef wellington was a favourite for a couple of reasons but mainly because they served the most fragrant truffle with this course and the beef went perfectly with the truffle. There's a disc of pastry on top of the buttery textured beef and the swiss chard gratin and thick, glossy jus. 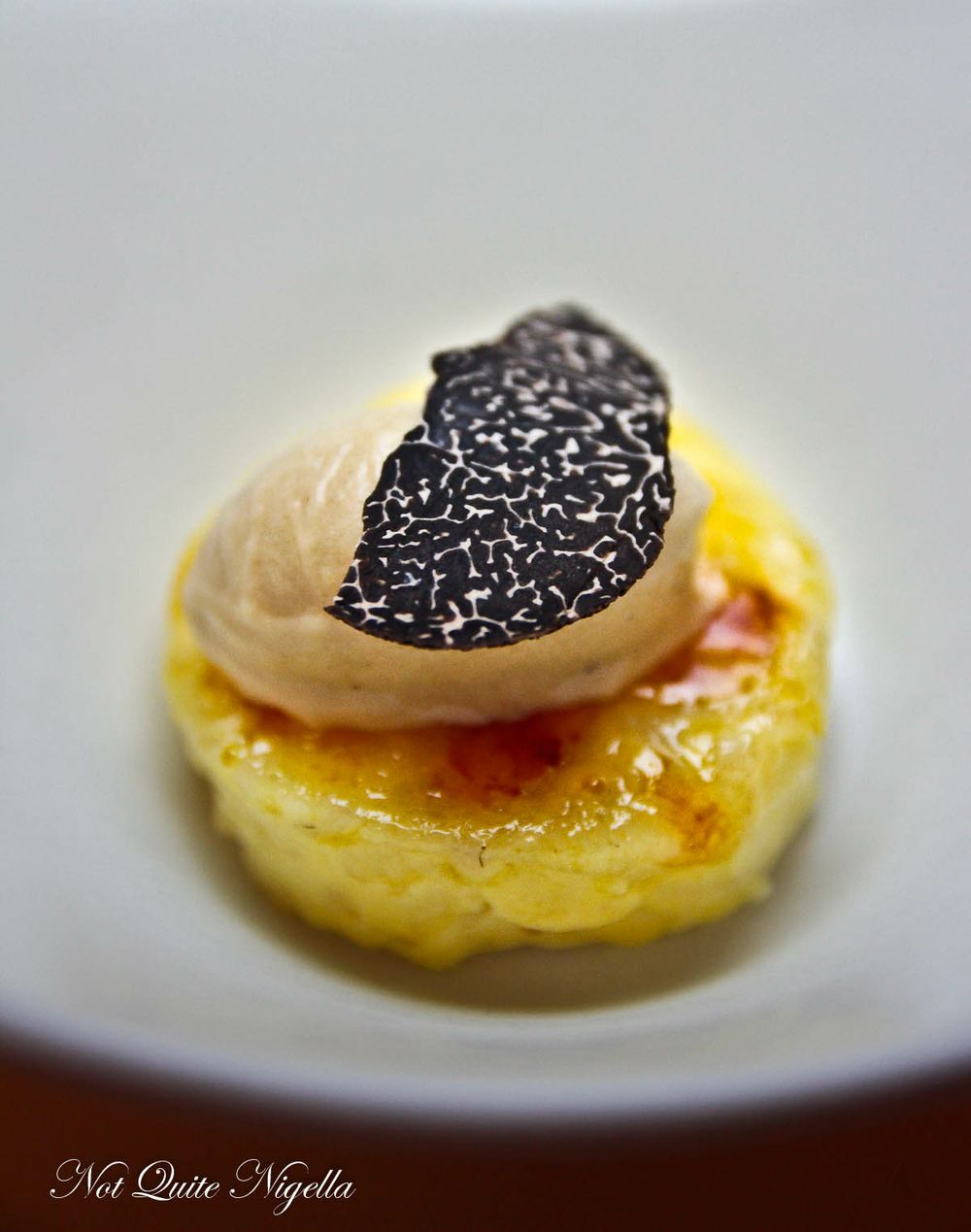 This was the course that Florizal was looking forward to most and it's a rice pudding with a thin brulee crust on top and a hint of citrus in the pudding itself. On top was a frozen banana and vanilla ice cream and a slice of truffle. 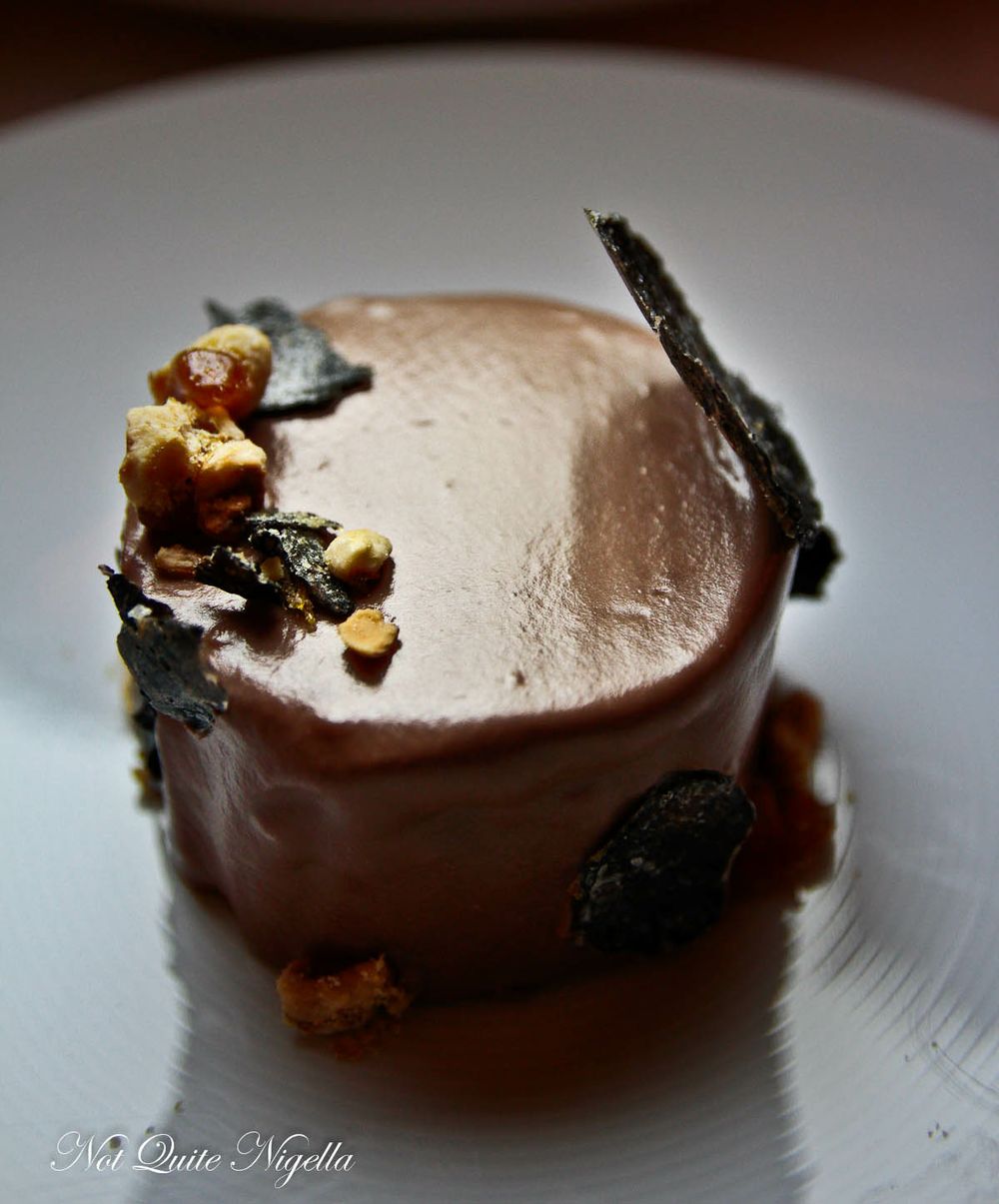 A marjolaine is usually a long cake that is made up of layers of chocolate, cream and sponge cake. In this case, it's a round individual serve with a milk chocolate hazelnut ganache outer encasing a sponge cake and plenty of very lightly sweetened whipped cream. In the centre is syrupy coffee and there are toffeed hazelnuts and crystallised slices of truffle stuck to the ganache on the outside. It's not a particularly sweet cake and I particularly like the hazelnuts and the crystallised truffle slices which taste a little like paper thin apple chips. And we like that they offer to pack up the cake for us as I'm so full and I can't finish it. They also offered to pack up the petit fours for the neighbouring diner who was too full to eat them. 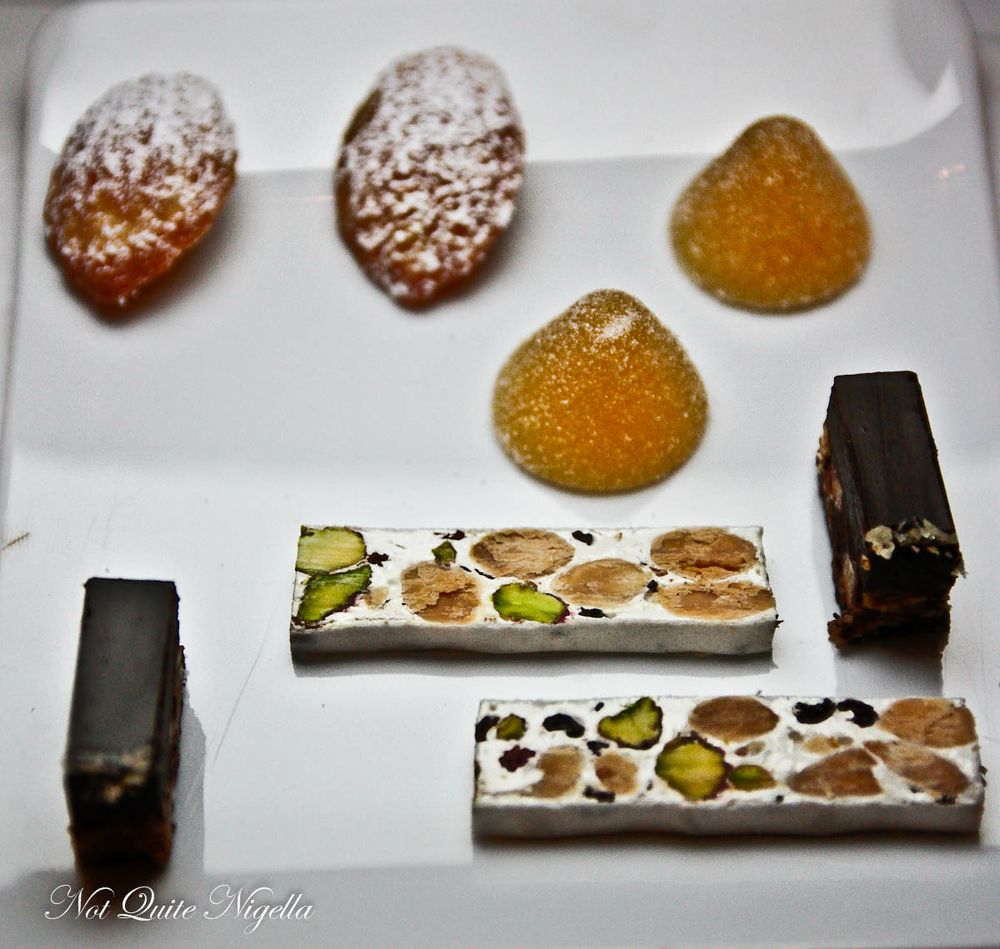 We order tea, a lovely petal infusion and some time later, our petit fours arrive. They're made up of chocolate ganache with praline and popping candy, an intriguing madeleine with wild thyme honey, a coffee bean nougat which is beautifully crisp and my favourite, a tangy pineapple jelly.

So tell me Dear Reader, do you ever dine solo? And do you like it when restaurants offer to pack food up for you if you can't finish it?

NQN and Florizal dined as guests of Rockpool on George 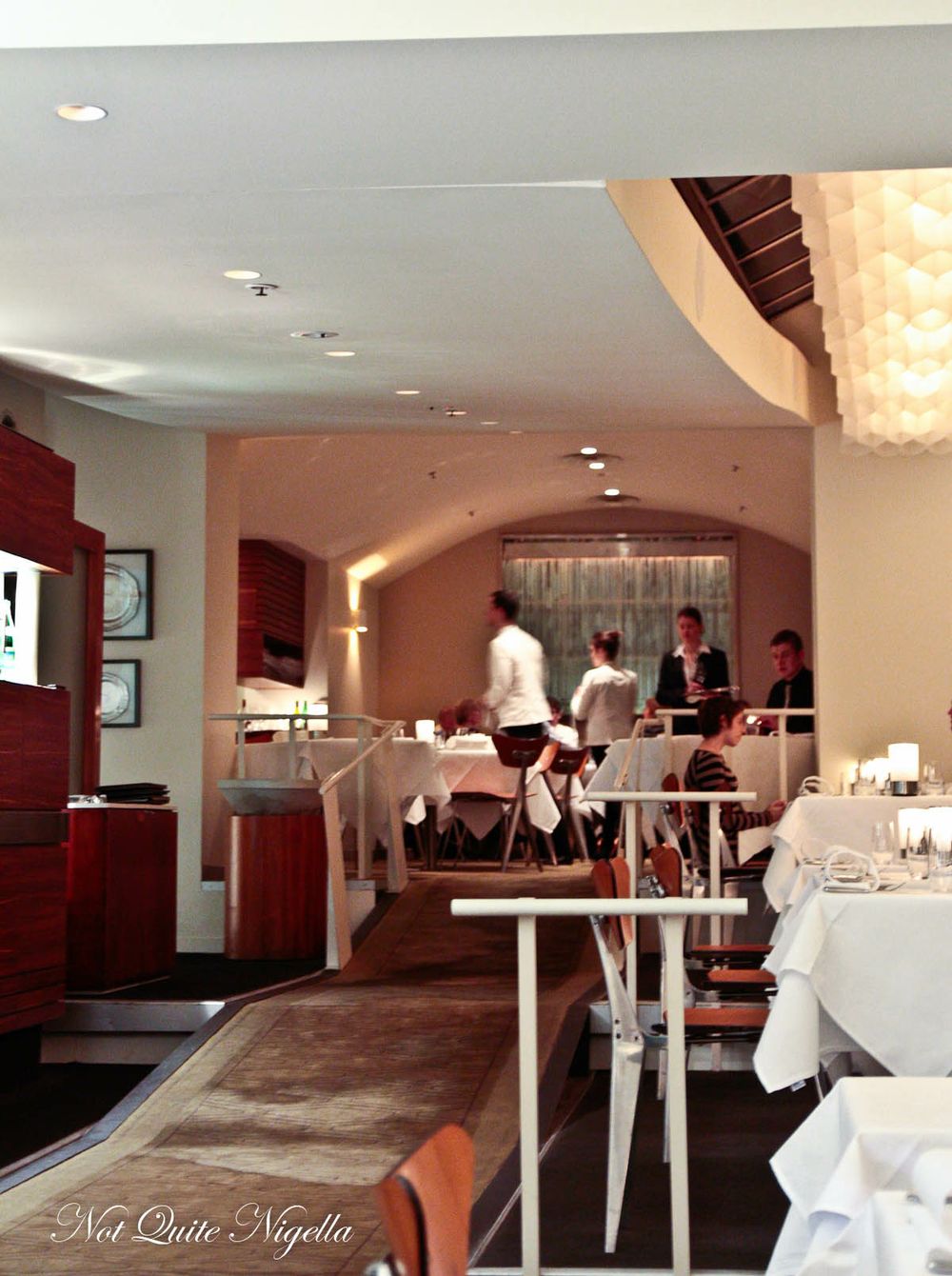