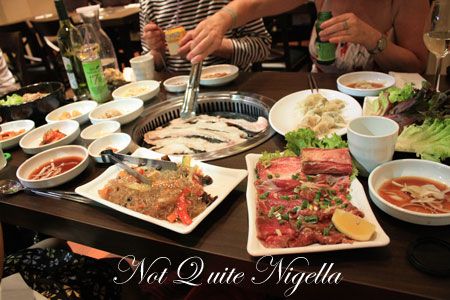 Mr NQN, Queen Viv and I were grateful that Wow Bulgogi has such a distinct and eye catching name. Miss America is even more grateful for it too. This steamy hot Summer evening, we were supposed to meet at our new place as Miss America had yet to visit our new digs. Not for lack of trying. You see on Hallowe'en he couldn't find our house having gone to the wrong street entirely and not possessing a mobile phone, he rang us from his home at 10pm distressed at wandering the streets of my suburb unable to find us. Tonight, the meeting time passes and he still hasn't turned up. We leave a note on the door and go to Wow Bulgogi wondering what fate might have befallen him this time. We sit down and peruse the menu and then who should emerge from a taxi but Miss America! 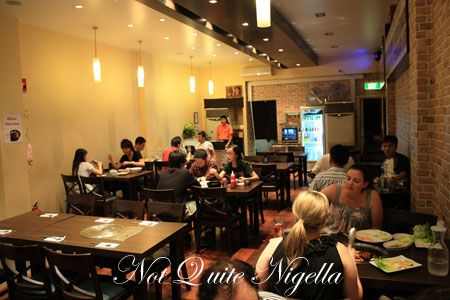 "I don't want to talk about it" he says distraught at the heat and another goose chase around the Eastern Suburbs. We prod him further and he tells us "I remember the name was 'Wow' something and I rang directory assistance and they told me this place". Turns out he had written down the wrong street number for us and the distinct name of this restaurant was the only thing that lured him to the right spot. He was living the 2009 version of the Scorcese comedy "After Hours". 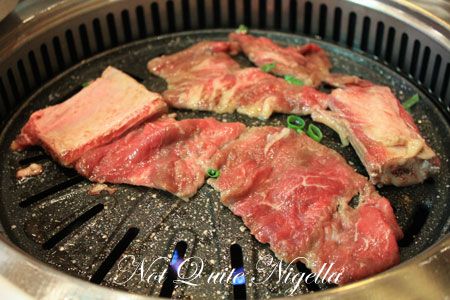 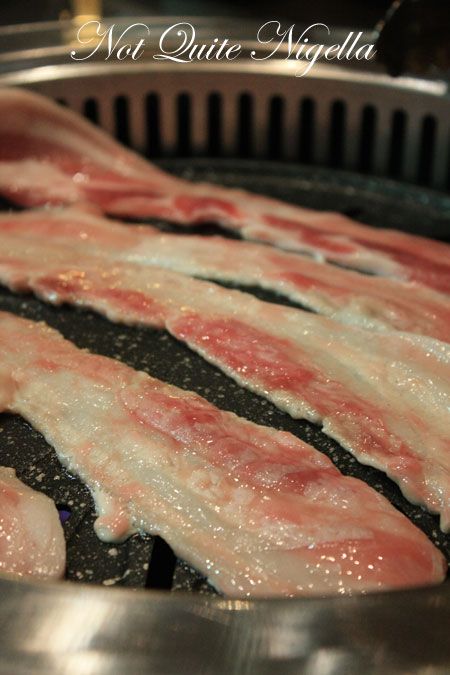 Onto the food - and the heat. Some might say that we are crazy having bulgogi during a heatwave and you may be right. We were seated near the open windows and even though there was an air conditioner at work, it didn't feel like it once the hot plate was turned on. The menu explains that it's called Wow Bulgogi as they want people to say "Wow!" when they taste the food. 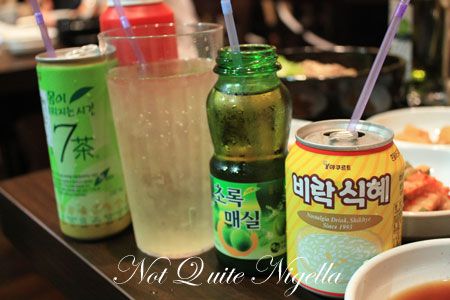 The Aloe Vera drink is the favourite with its sweet, almost faux grape flavour taste. The Sikhye or rice punch is sweet with little bits of rice floating in it and the chorok maesil is a pleasant, fruity flavoured drink. The 17 Cha is a plain unsweetened green tea and is quite dull in comparison. We get our complimentary assortment of accompaniments including potatoes, marinated tofu strips, kim chee, beansprouts and coleslaw with the tastiest being the sweet soy potatoes and the marinated tofu strips. 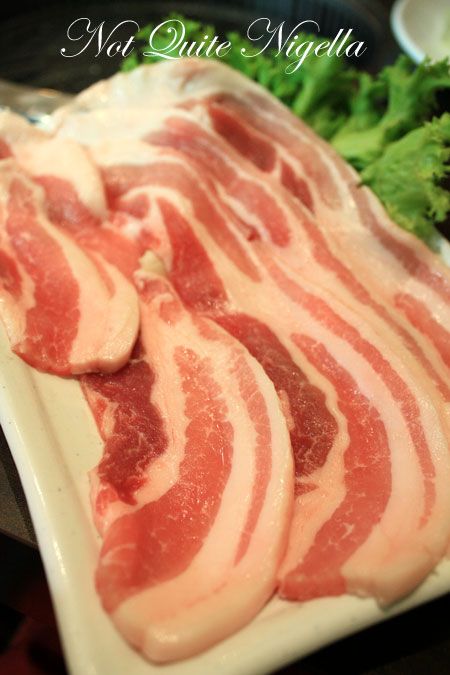 Queen Viv starts cooking the pork belly which resembles thick slices of bacon. It doesn't cook to a crisp like bacon as it's not cured. It is grey when cooked but when dipped in the hot red bean paste it is lip smackingly good and there are suggestions of ordering more of it. The pork is soft and tender and despite how rich and fatty it is, it's also undeniably moreish. 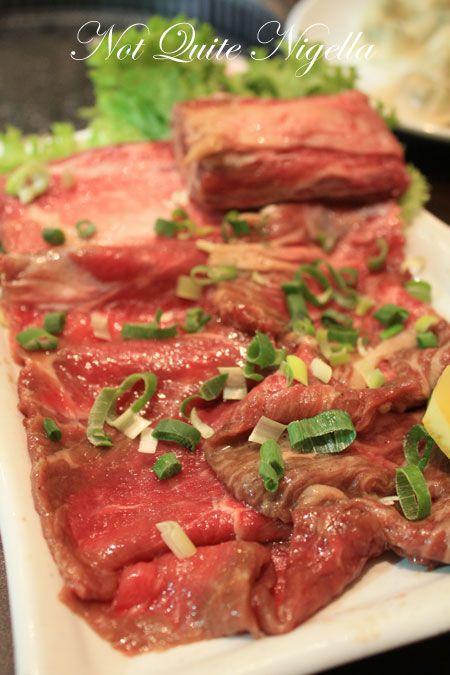 Queen Viv then fries the marinated meat ribs cut out from the bone and we have high hopes for these as we love ribs and really enjoyed them the last time we went to Carne Station. I have visions of gnawing at the rib. The meat is quite nice and tender although not quite as flavoursome as Carne Stations but the ribs sadly despite the best effort tooth gnawing aren't edible. 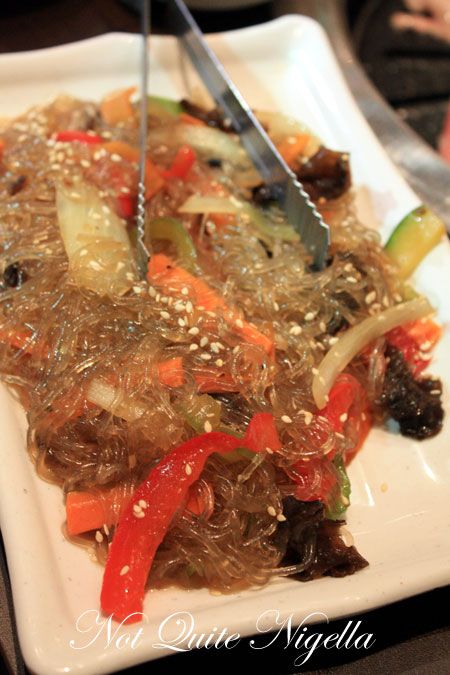 I love Jap Chae and this one isn't bad although it isn't the best that I've had. I prefer it with more sesame and with more marinated beef strips. This seems like a "lite" version without all the good bits. 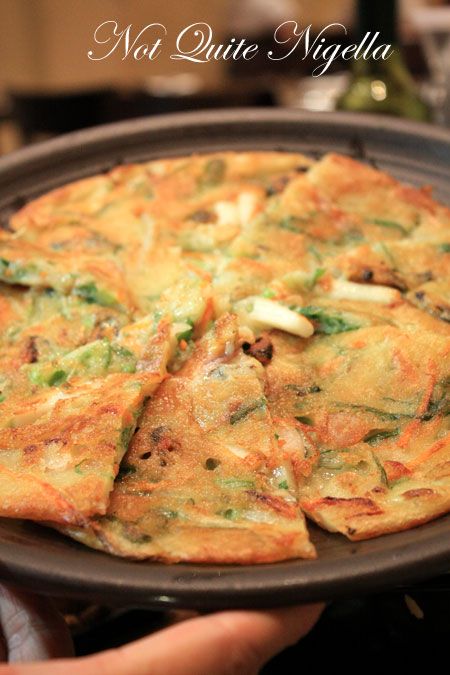 The Seafood pizza was a big hit with the table with the rice flour pizza full with little pieces of squid and prawn. The texture is very crispy - much like those crispy little Vietnamese rice cakes and we go for extra slices although it does need a dousing with the sauce provided. 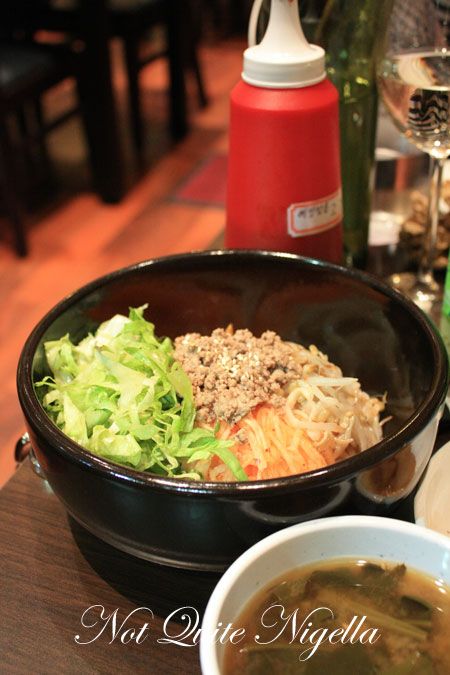 One of the best deals cost wise has to be the $7 Bibimbap which we assumed would be tiny because of the price. I have to confess that it wasn't the best Bibimbap I've had in that there's very little meat and I prefer it sizzling in the pot with a raw egg yolk in the centre which you stir around and cook and then eat the crispy rice bits from the bottom. This one doesn't come sizzling and there's no raw egg yolk in the centre but for $7 it's a good stomach filler for the terminally hungry (I'm looking at Mr NQN). 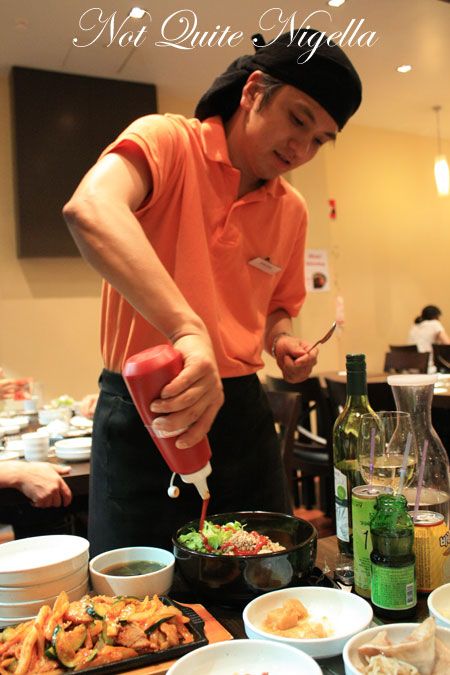 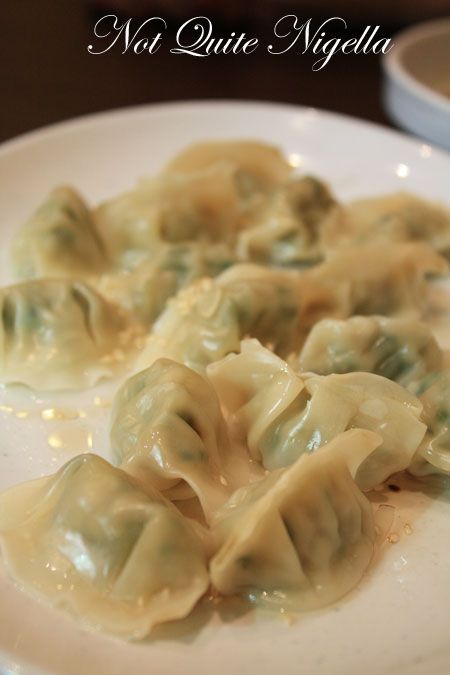 Next we have dumplings called Mul Mandu which means Water mandu as they are steamed. They don't look very impressive but they're quite good, similar to the garlic and chive yum cha dumplings. 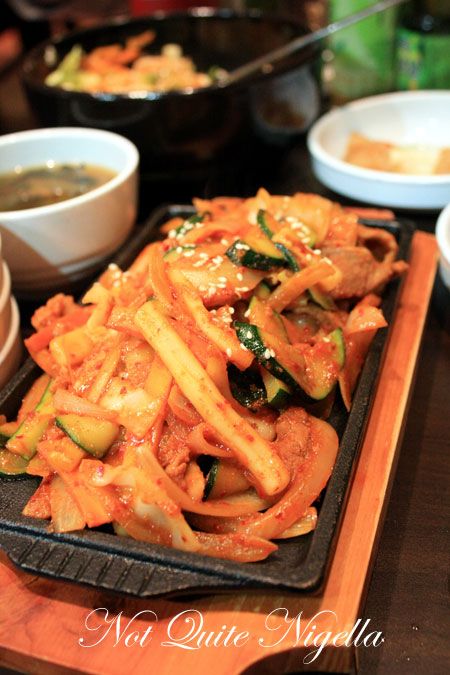 The Pork and Squid Osam Bulgogi comes out on a sizzling plate and is quite nice and spicy although it doesn't really wow us and at this point we realise that we've ordered half of the menu and are trying to balance it all on our table which isn't easy. 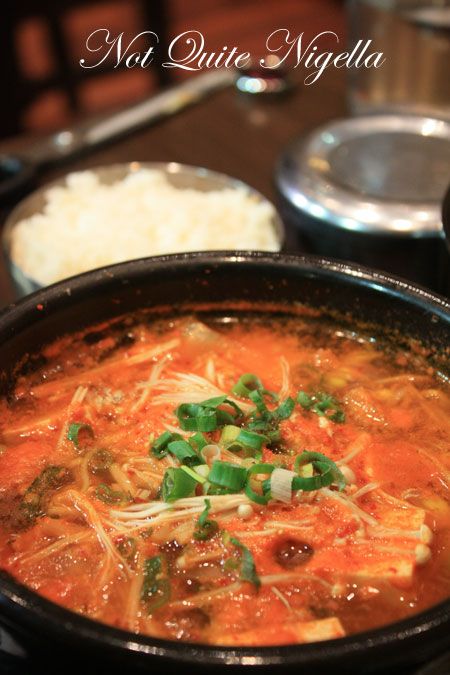 This stew-like dish made with Myeongran Jeot (salted, seasoned and fermented Alaskan Pollock's roe) and chilli pepper divided us. Miss America and I didn't particularly like it whereas Queen Viv and Mr NQN quite liked it. I found the soup a touch bland but the roe was an interesting touch being rich and salty like roe and there's plenty of it along with tofu and mushrooms in the stew.

The table is covered with empty plates and despite some furious fanning we're still sweltering in the heat so we ask them to turn off our heat station. A nearby table burns some meat and leave quickly and we take their cue under a black cloud of grill smoke with our bellies full.

So tell me Dear Reader, does a restaurant's name ever compel you to visit it? And if so, what was that name? 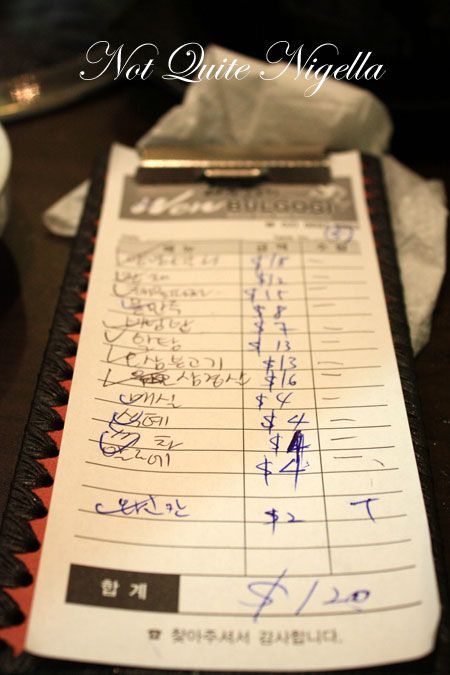 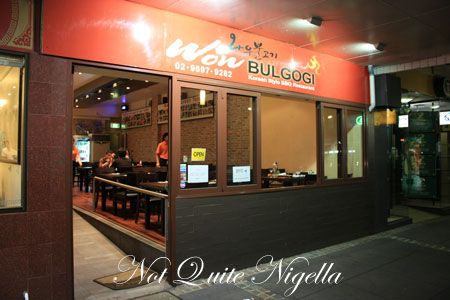