The Hills Are Alive With The Sounds of Salzburg, Mozart, Guided Symbols & Hotel Goldener Hirsch! 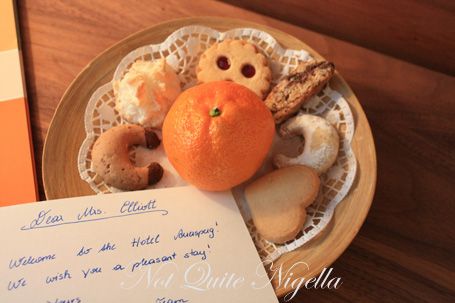 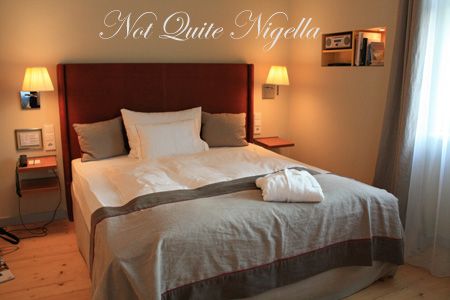 After our two hour drive from Munich Airport to Salzburg, we reached Hotel Auersperg, a 4 star boutique hotel which features a blend of modern and traditional Austria. The rooms are given are in the new villa wing and are all very modern and when I walk in I see a welcome plate of Christmas cookies and fruit. It's a nice touch as this is what a typical Austrian mother would prepare for her family around Christmas time. 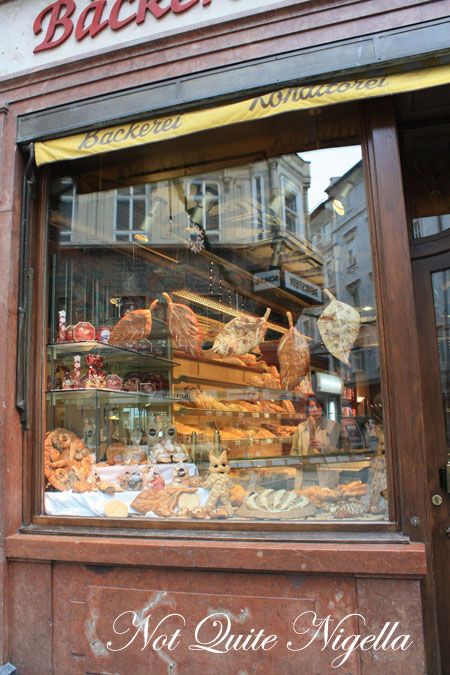 A bakery in Salzburg

We're experiencing what is known as an "old lady's Summer" (Alt-Weiber Sommer) which means that the weather is unseasonably warm which will probably mean a distinct lack of snow as the temperatures peak at 12 degrees celsius.  I'm a little relieved as I am rather hopeless in the snow although snow capped photos would be lovely indeed. 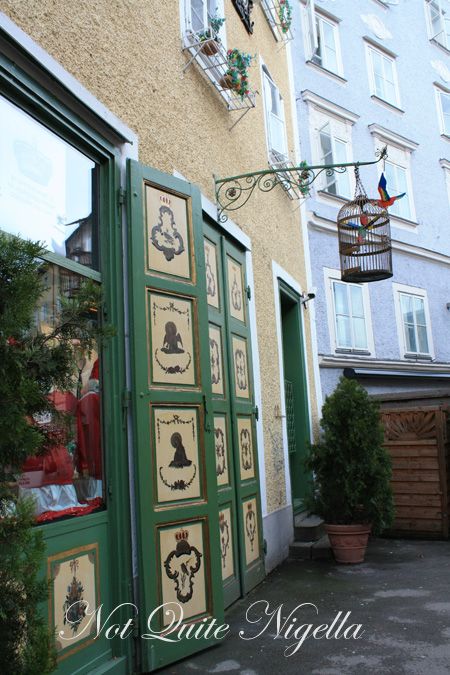 Salzburg is a small, charming city in a sublime alpine setting. It houses 150,000 residents but every year also hosts between 6-8 million tourists a year and it is clearly a city that makes it's living from tourism as witnessed by the groups of tourists and guided tours. The two main drawcards are of course composer Wolfgang Amadeus Mozart who was born in Salzburg and the Sound of Music film which was filmed in Salzburg. 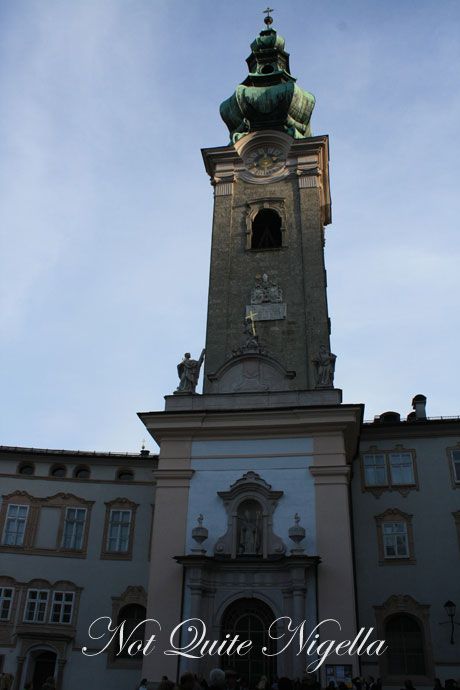 Salzburg means "Salt Castle" as they used to mine salt here directly from the mountain. Salt or "white gold" was precious indeed as it was the only means of preserving food at a time when there was no refrigeration. The best way to get around the city is with a Salzburg card which you can buy in 24, 48 and 72 hour blocks with the 24 hour card costing E22. This includes free entry into most of the attractions you'd want to see as well as transport. 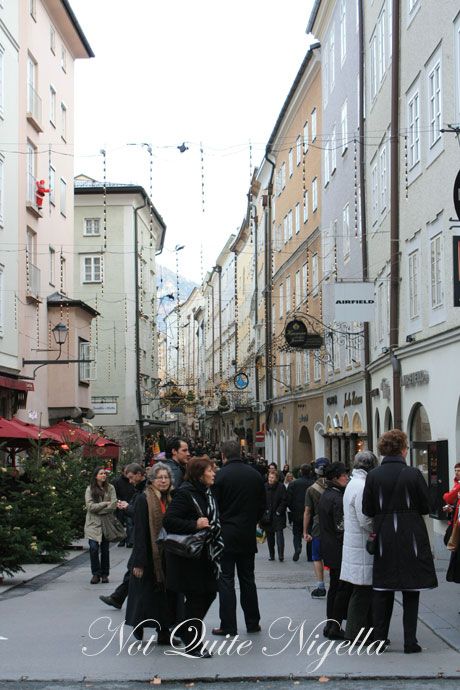 It's late in the afternoon once we've arrived. Tonight we are headed out to dinner at one of Salzburg's most famous Hotels preceded by a quick tour of Salzburg. Our tour guide Martina is dressed in traditional Austrian costume and she shows us around the old and new areas of Salzburg. Night falls quickly here and when it does the beautifully lit streets almost come to life. 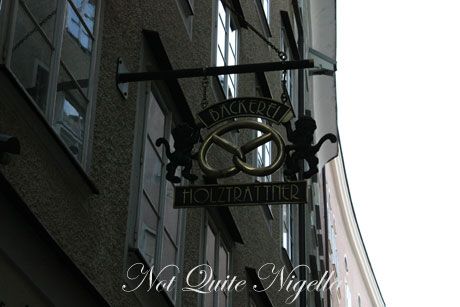 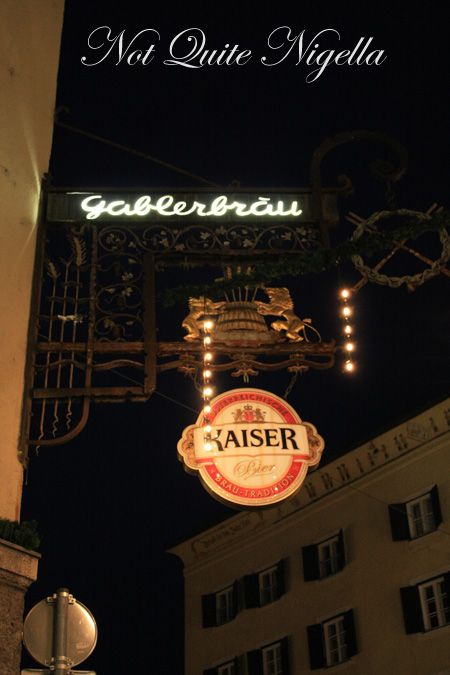 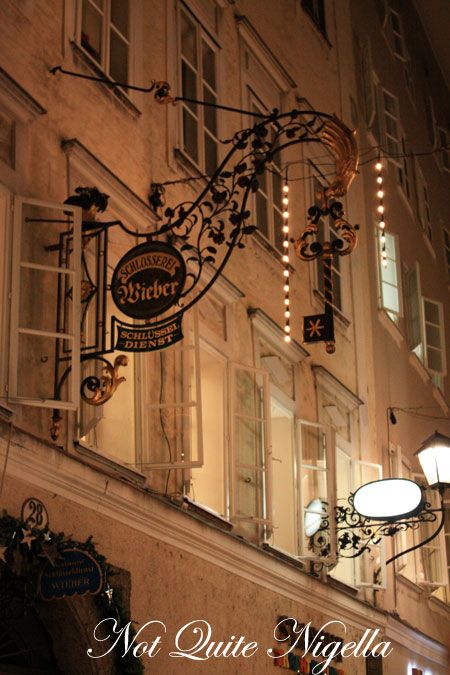 She tells us about all sorts of fabulous details like the guided symbols which date back to many centuries ago when people couldn't read. To locate places, they simply looked for the symbol; the key is a locksmith, a pretzel is a symbol to the bakery and the beer barrel below is for a beerhouse. Can you guess which place this is below? 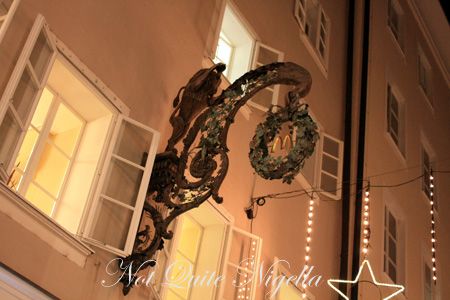 Guess whose guided symbol this is?

If you guessed McDonalds you are right. Even though there is a McDonalds it's possibly the subtlest looking, toned down McDonalds there is in existence as they weren't allowed to put up their neon arches and trademark bright visage. Many of the houses are baroque style in baroque colours (light blues, pinks, yellows and pistachio green) especially in the old town and there is a strict edict that you can only preserve and renovate a building, not tear it down. 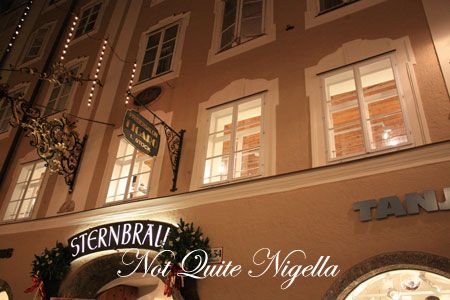 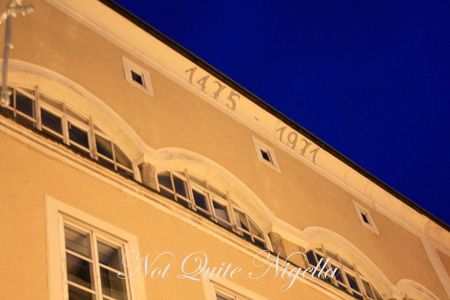 Once a house is painted a particular shade, the owners cannot change the colour of the building. If you look carefully, the lower floors have higher ceilings and as the floors go up, the ceiling height shrinks. This is because the upper levels were formerly the servant's quarters. Some houses have numbers written on them and the numbers represent the first time they were built and the second number is the year of the renovation. 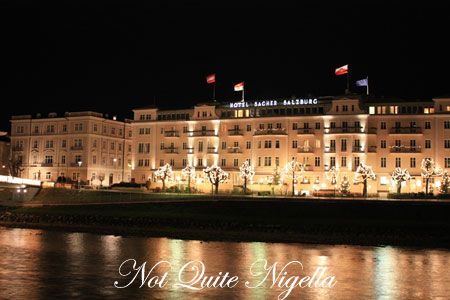 We pass the Sacher Hotel where the famous Sacher Torte is made which proudly claims to be the home of the original Sacher torte. 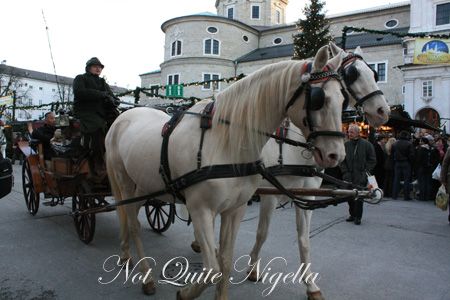 There are horse drawn carriage rides available throughout the city and we get used to hearing the familiar clip clop of the horses. There is also a man that keep the streets clean of ahem...horse manure. When the horse carriage driver sees that a horse is about to make a "deposit" he calls the man on his mobile phone who high tails it over to the location of the deposit to clean it up! 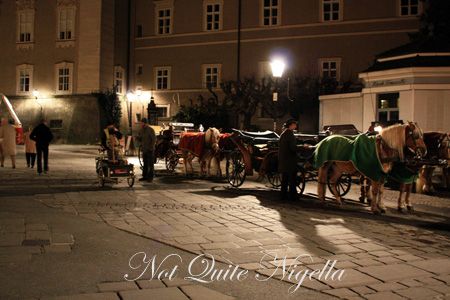 Man on the left with the wagon and broom: horse deposit cleaner 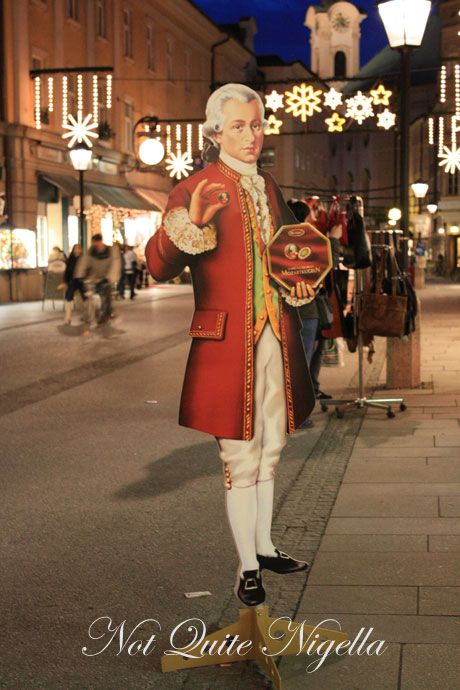 Not really Mozart you know... 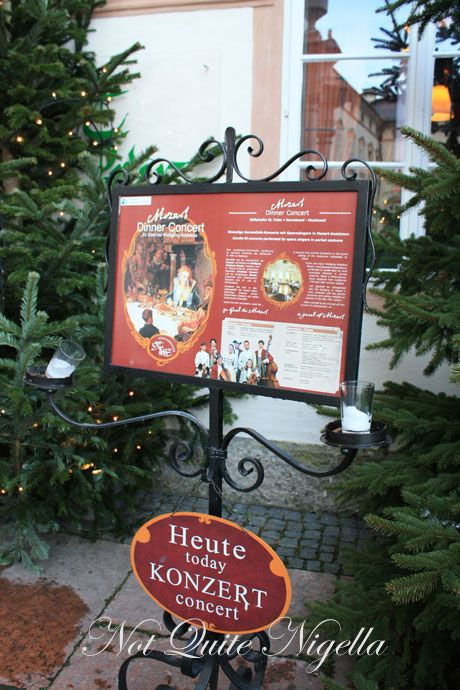 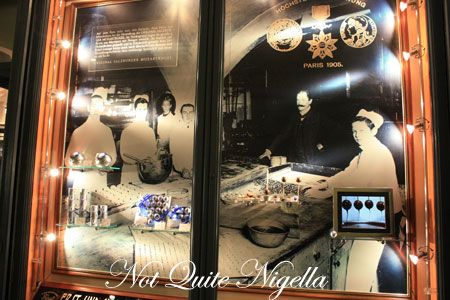 Mozart is big business here with his image emblazoned on perfumes, flash drives, CD holders, mugs, pens, chocolates and Alison spots a Mozart cartoon on television. There is also a special type of chocolate called the Mozartkugeln. The brand Fürst produces hand made Mozartkugeln dipping up to 4,000 individual chocolates a day. Astrid from the Austrian National Tourist Office hands us each a silver wrapped ball and we take a bite-it's delicious. In the centre is a praline marzipan ball then some hazelnut nougat and then a chocolate coating. 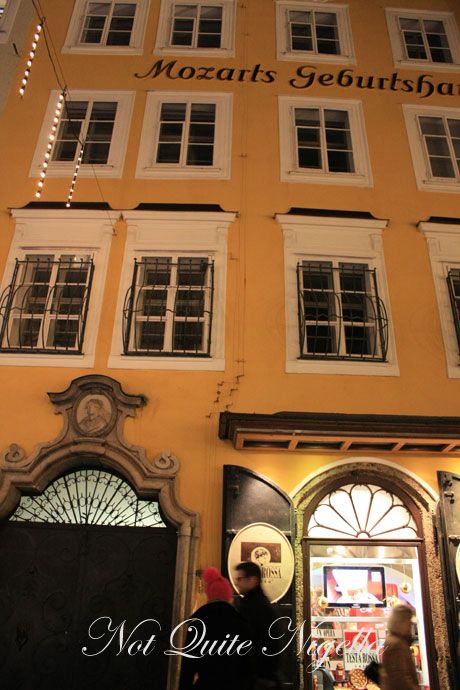 We walk past Mozart's birthplace, with the words "Mozart Geburtshaus" (birth house) painted on the side. 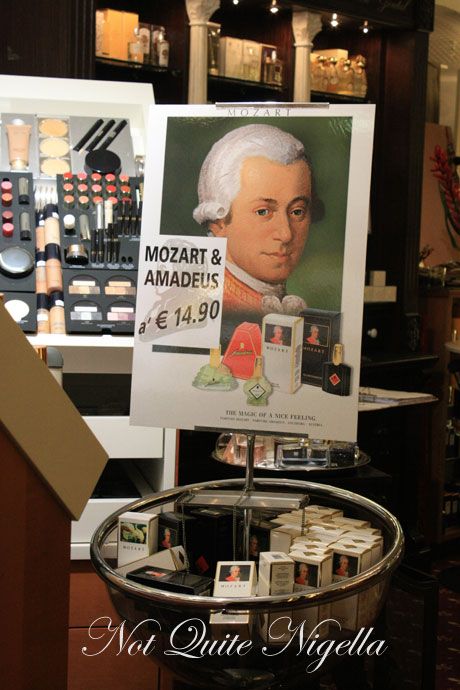 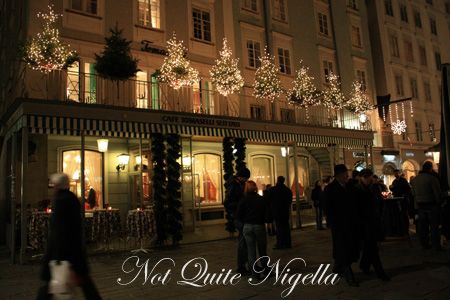 We then stroll past Cafe Tomaselli which is where Mozart used to frequent and he added  a mention of their wine in one of his operas. Interestingly, it is one of the few places that still to this day has a separate waiter for drinks and a "Cake Madame" who proffers cakes from a cart. 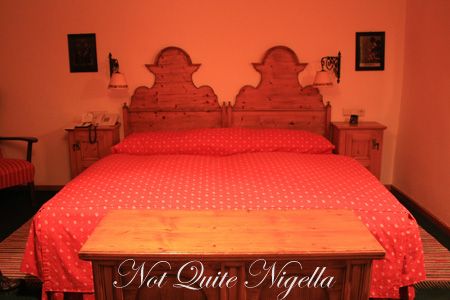 The bed in the hotel room Prince Charles stayed in

Our next stop now that we've worked up a hunger (although according to our body clocks it's 5am Sydney time), is the Hotel Goldener Hirsch. Established in 1407, it is one of the oldest historically preserved hotels in Salzburg. Prince Charles was a former guest and in every room is at least one antique item of furniture. With 69 rooms and 4 suites it is said to be made up in typical Austrian style. Prices are firmly in the luxury category here and it is said to be one of the best hotels in Salzburg. 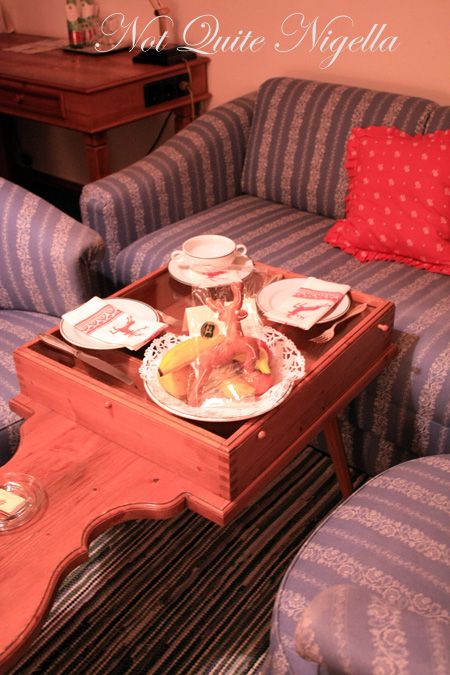 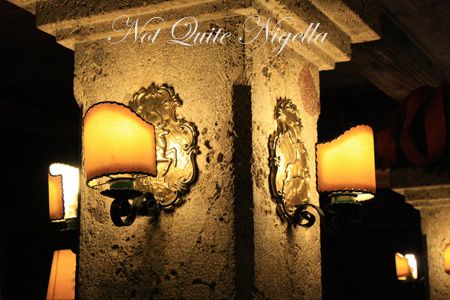 Deer are the theme in the hotel's restaurant and they feature prominently from the lamps to the cutlery. We sit down to an Austrian dinner of pancake soup, chicken Viennese style and chocolate cake called Rigo Jancsi. 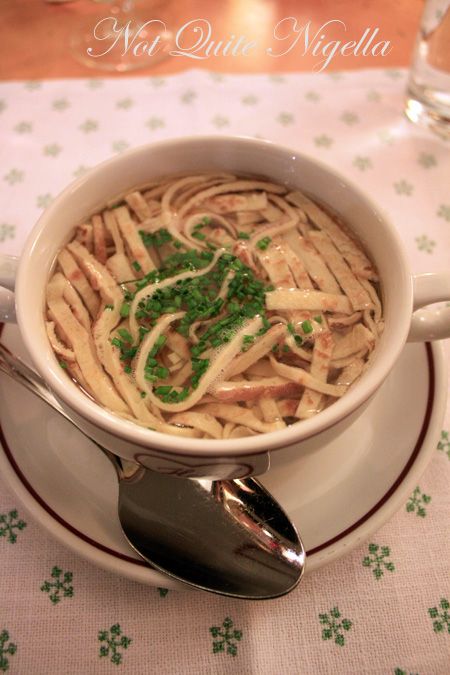 The frittaten suppe is delicious and warming and reminds me of my friend M's pancake soup. We're told that most Austrians choose soup for their entree, particularly in winter. Later at the end of our trip to Austria, I reflect back on the many Pancake soups I tried here and this was my favourite. 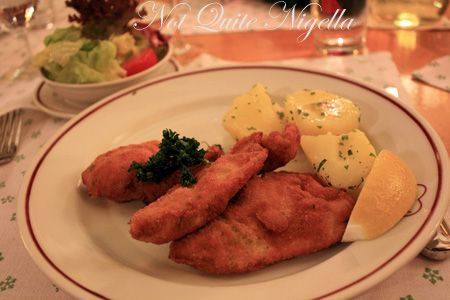 The main arrives and it's Viennese chicken which is chicken that has been crumbed and fried much like a schnitzel. The side salad and potatoes are also good, particularly the salad which is well dressed. There is discussion about how schnitzel came to be so popular and apart from the taste, its resemblance to gold appealed to people. 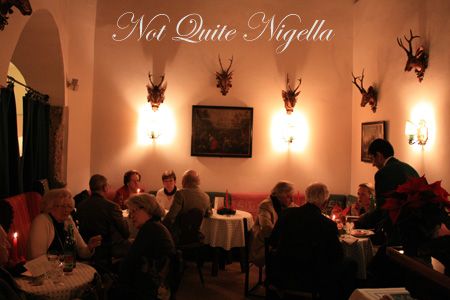 The hotel bar- usually very full on weekends and prior and post theatre. 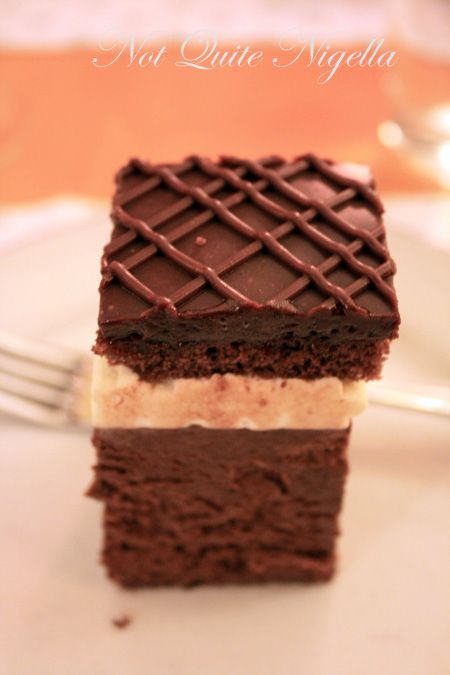 The dessert is a rich Hungarian chocolate cake which is so rich it tastes like chocolate buttercream. My body is now asking me why I'm feeding it chocolate buttercream at 6am (not that I haven't done it before) so I don't eat all of it and we all go back to the hotel happy and full of food. I sleep soundly in my room. If this is only four hours in Salzburg, I can barely wait for tomorrow. 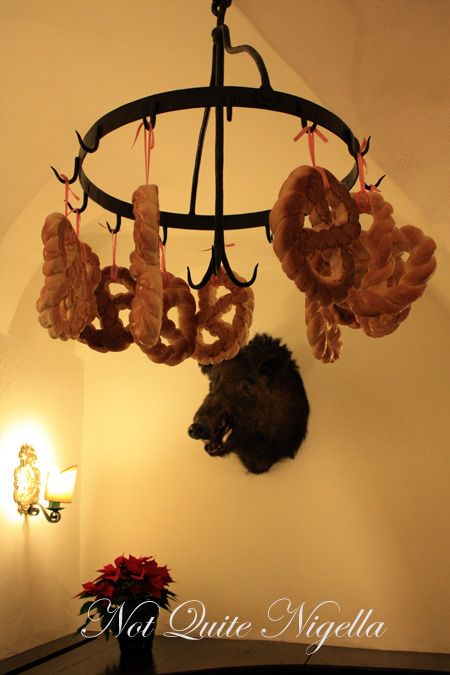